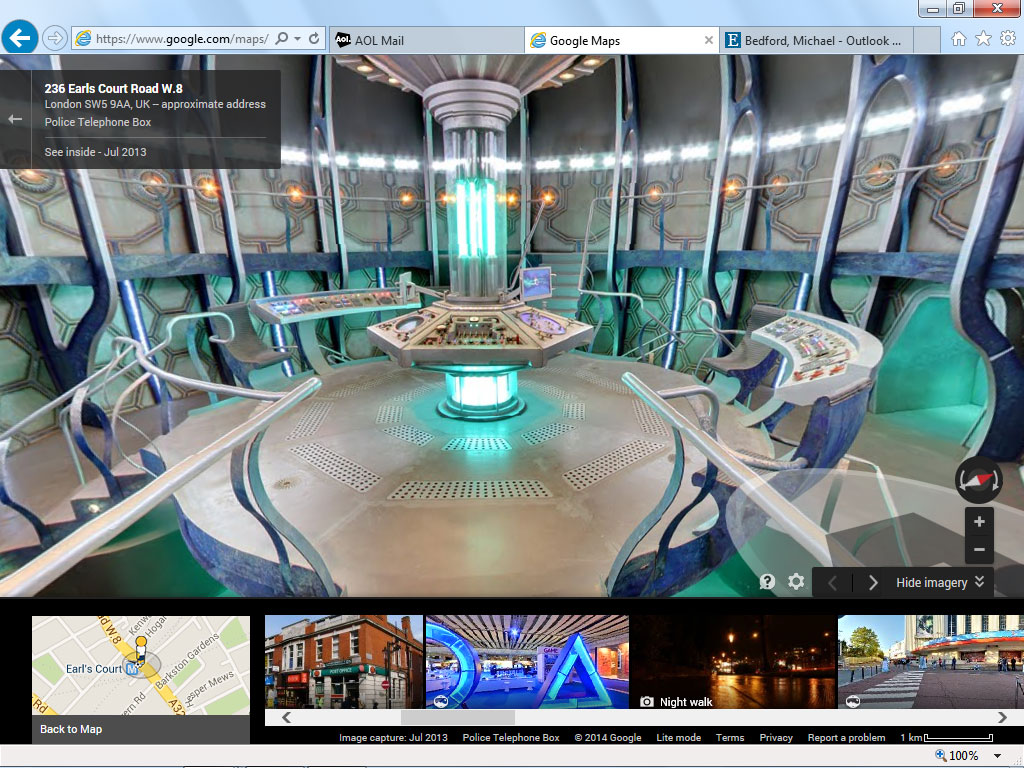 Time was when software developers hid features in software that would only be revealed if you knew a convoluted sequence of key strokes. Often these so-called Easter eggs, were just lists of the programmers who had written the code, but they were sometimes much more. Software publishers eventually decided that this wasn’t professional behaviour so they were banned and pretty much died out. However, if you know where to look – especially in Google products – you’ll still find hidden treasures today.

The image below, for example is from GTA:San Andreas. You can use the jetpack cheat to fly up to the top of the Golden Gate bridge and you’ll see the message. More of an anti-easter egg, so let’s get on with the fun stuff. 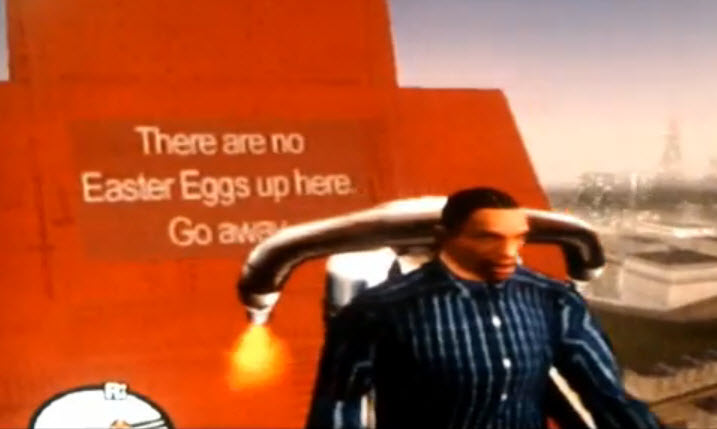 1. Head over to Google.co.uk and type fun facts or i’m feeling curious into search box or the Omnibox – the address bar in Google Chrome. You’ll see a widget showing a little known fact – enjoy spending the next hour learning about things you never knew. 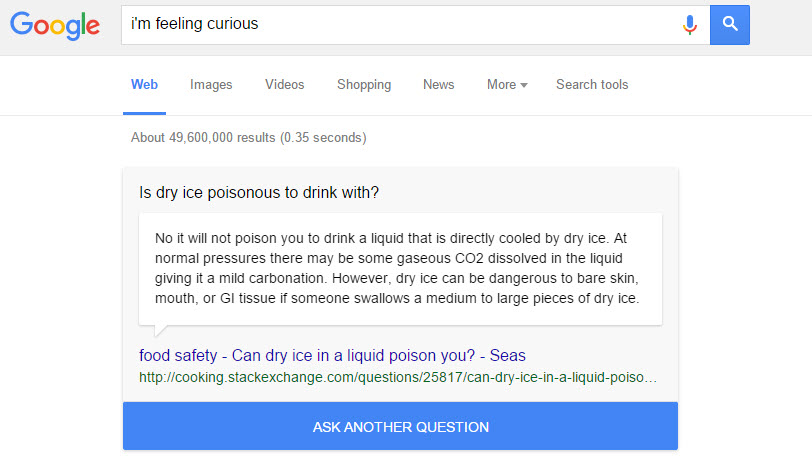 2. In Chrome or Firefox, but not Internet Explorer or Opera, and search Google for the phrase “do a barrel roll”. You’ll be treated to the sight of your results page being rotated through a complete 360 degrees before returning to normality. 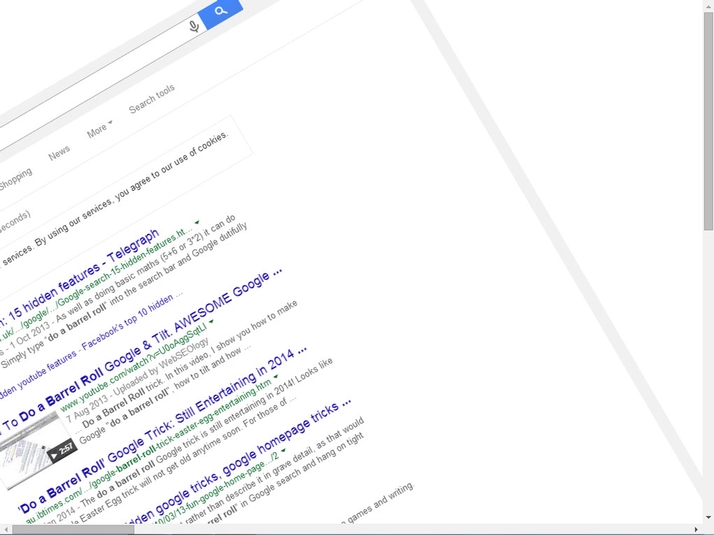 3. Again in Google , search for the words “blink” and “tag”. The two words will flash where they appear on the results page. This commemorated the removal of the blink feature from html and hence the web (unless you know a workaround as Google obviously did). 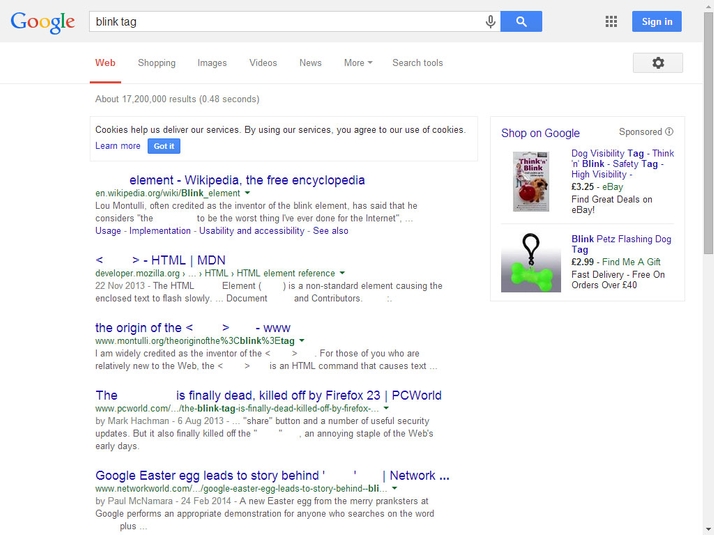 4. Try typing any of the following into Google:

And you will find some interesting results. In the list of playful results is the great site elgoog.im which has some Google Doodles to play with (the guitar is a favourite of ours) 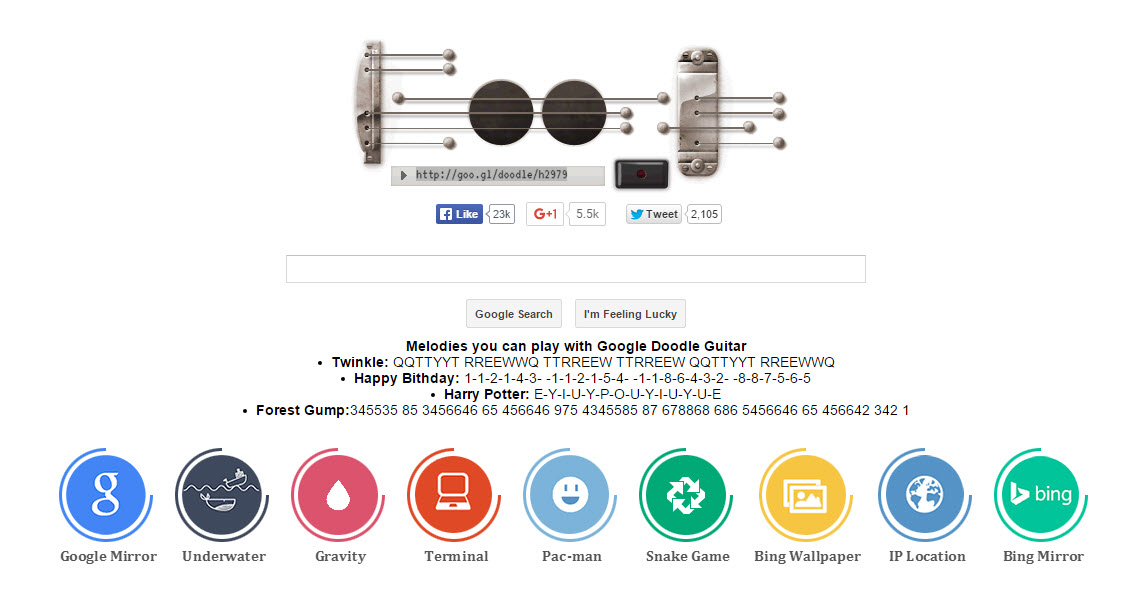 5. If you have an Android device running Lollipop, go to Settings and then About Phone. Now tap on the version number lots of times. A lollipop will appear. Long press on it and you’ll be able to play a clone of Flappy Bird with giant lollipops. 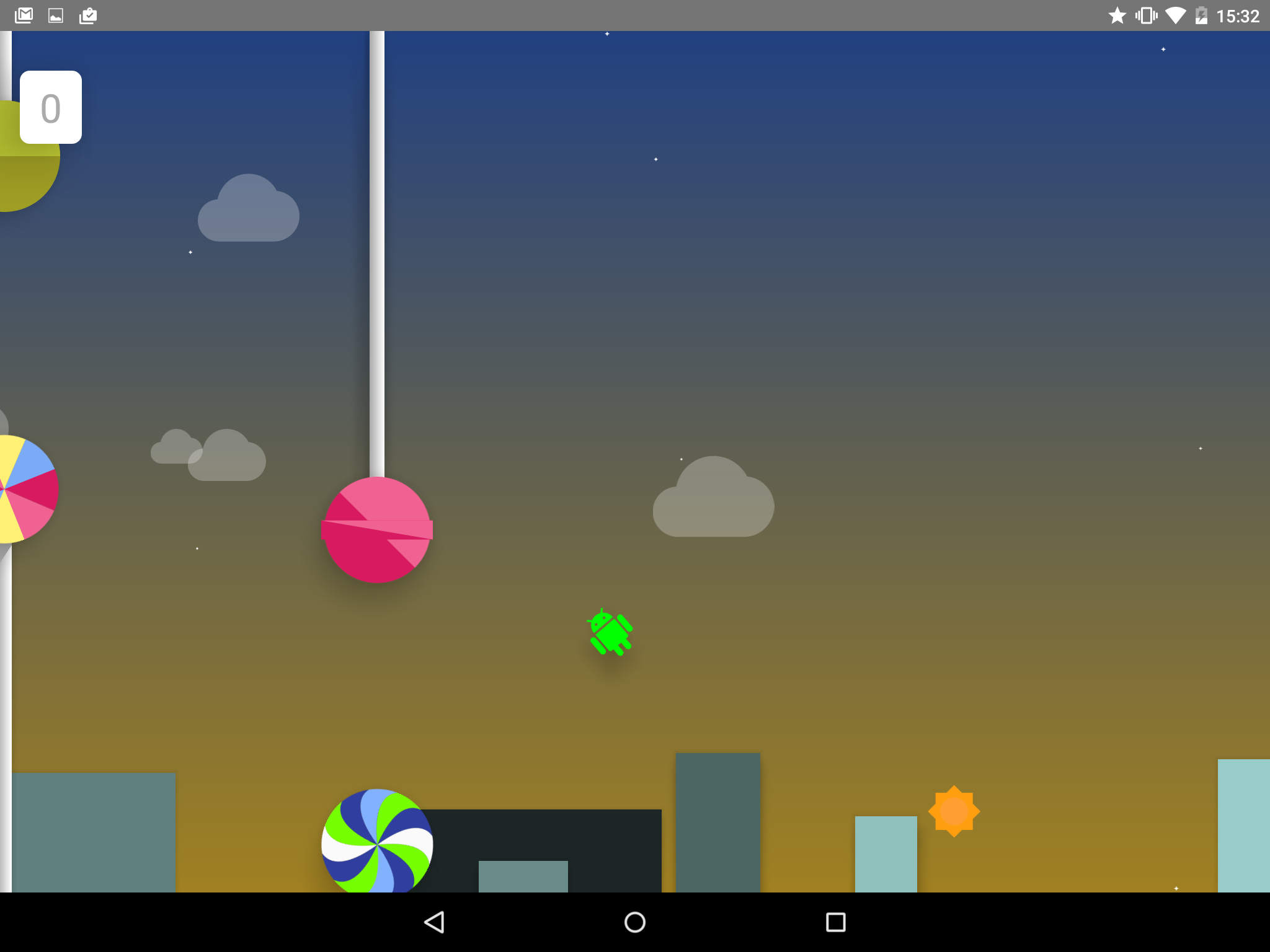 6. Try typing =rand(4,4) into Microsoft Word, followed by the Enter key. That odd looking phrase will disappear and, in its place, four paragraphs each containing four sentences of largely random text will appear. It works with other numbers too. 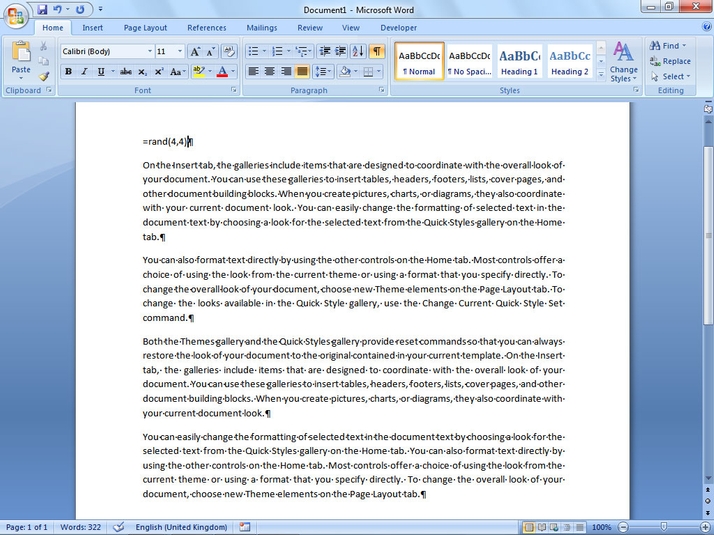 7. You’ll have noticed that Google helpfully offers a correct spelling if you miss-spell something in the search box. Using that classic phrase “Did you mean:” Google offers a somewhat less than helpful suggestion of “nag a ram” if you try searching for “anagram”. 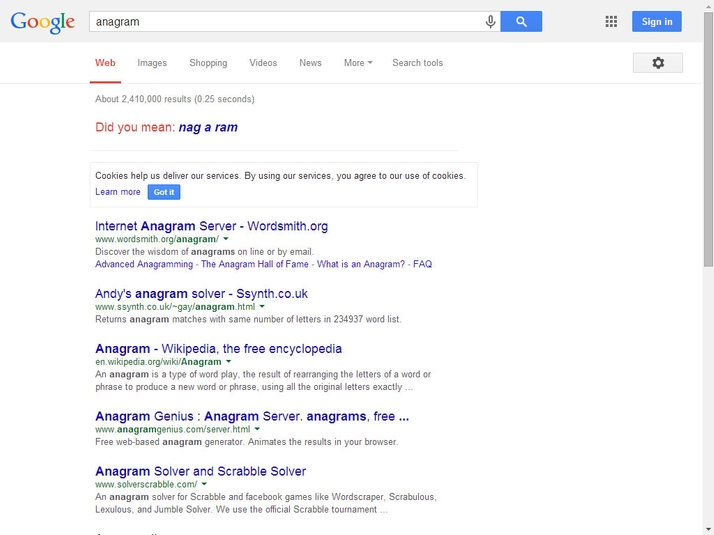 8. Mozilla Firefox provides information on certain technical topics using the “about” instruction as you’ll see if you type “about:plugins” into its address bar. Somewhat more bizarrely, “about:robots” teaches you about our mechanical friends, including the fact that they have shiny metal posteriors which should not be bitten. 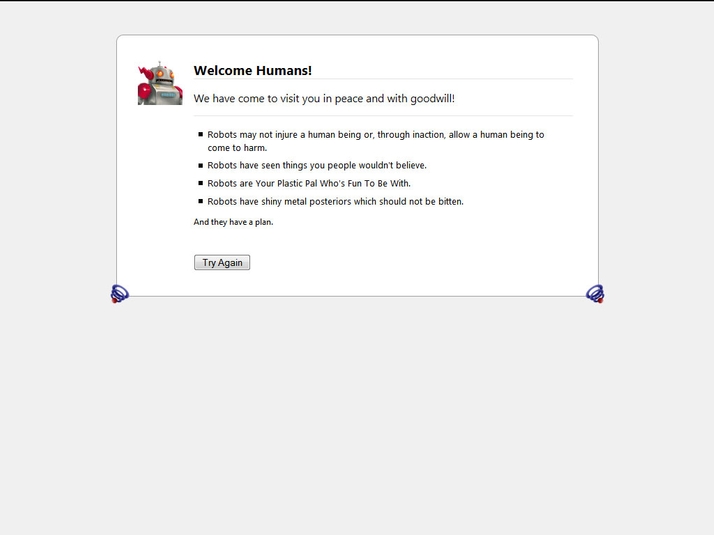 9. For a bit of Google nostalgia, use the search engine to look for “Google in 1998”. You’ll be treated to what you’d have seen had you surfed to the website 16 years ago. Click on “Take me back to the present” to return to 2014. 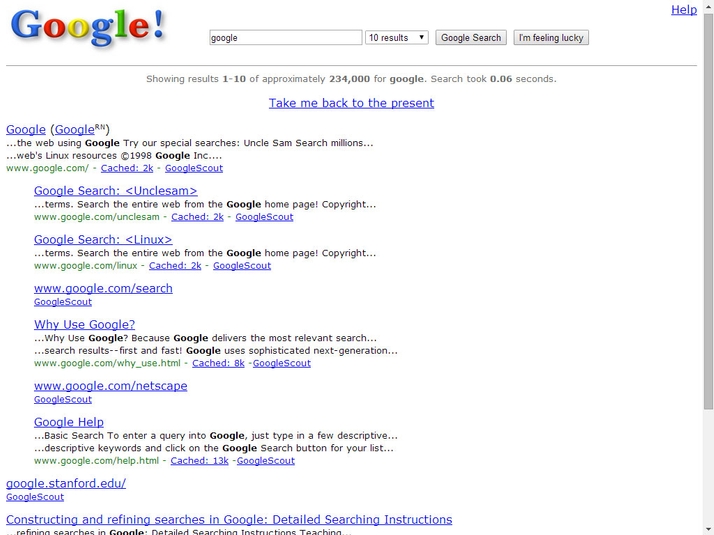 10. Stand outside Earl’s Court Underground station in Google Street View – this link will take you there. You’ll notice an old-fashioned police phone box that’s reminiscent of Dr. Who. Press the up arrow key and, in a break from Street View’s normal aim of presenting reality, you’ll be transported inside the Tardis. 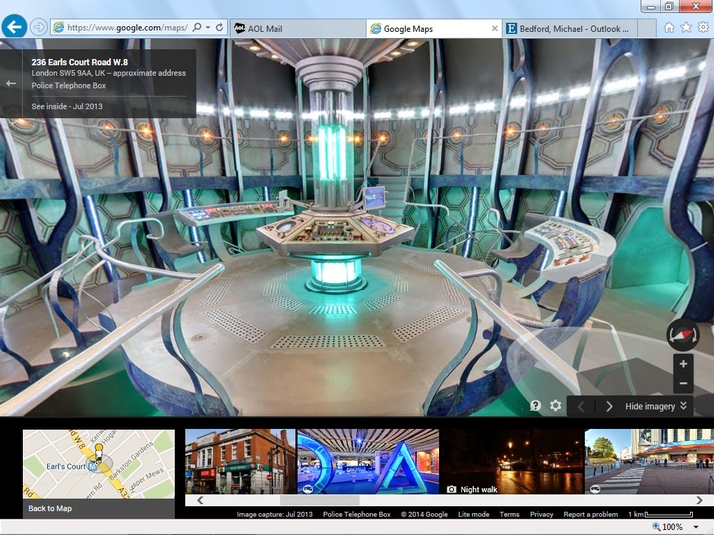 11. Easter eggs aren’t just on the Web and in Windows software. On your Android phone select “Settings”, then “About phone”, and now tap repeatedly and quickly on “Android version”. Eventually an image will appear featuring the green Android man. The graphics changes from one version of Android to another. 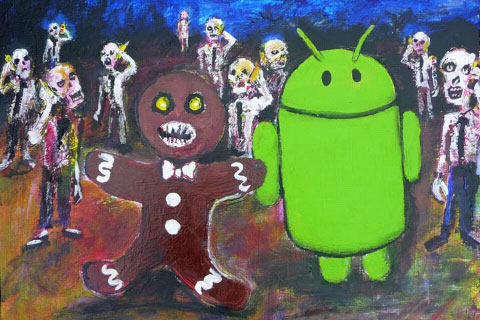 Did we miss any? Let us know below.