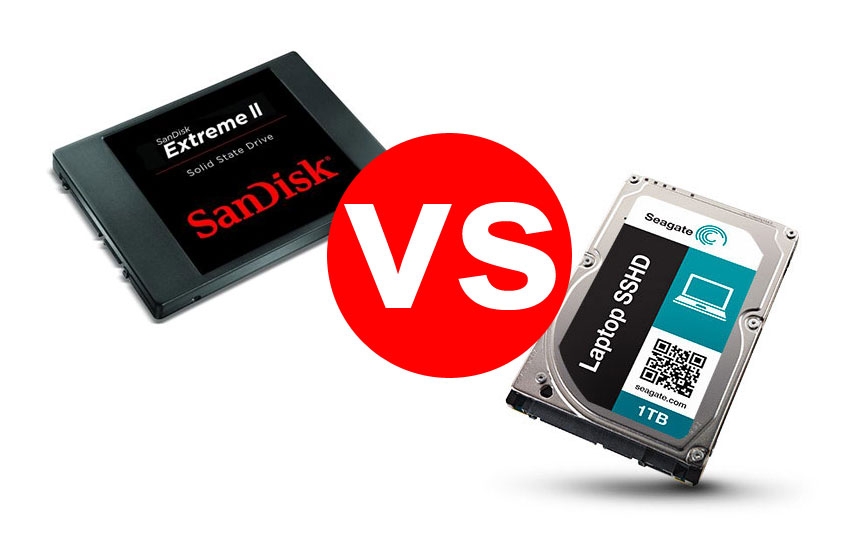 If you’re looking to upgrade your hard drive or you’re buying a new PC or laptop, it pays to choose wisely when it comes to storage. We explain the differences between SSDs and SSHDs, and which is best for you.

What is an SSHD?

SSHD stand for solid-state hybrid drive. It’s a traditional spinning hard disk with a small amount of fast solid-state storage built in. A solid-state drive – or SSD – is a storage drive made entirely of memory chips instead of the spinning magnetic platters you’d find inside a traditional hard disk. It’s a bit like the storage in a USB thumb drive, but much faster.

So an SSHD is basically a hard drive and SSD in one, which is why it’s called hybrid. The drive appears as a single device to Windows (or any other operating system), and the SSD part is just used for temporary storage to speed things up: your data is stored long-term on the mechanical disks.

These days SSDs come in two main types: SATA and NVMe. SATA SSDs are physically like laptop hard drives, and connect to a SATA port in your PC or laptop.

NVMe is the latest type, shown above right, and looks a bit like a stick of chewing gum. This goes into an M.2 slot in your PC or laptop and offers much faster speeds. We recommend the best ones to buy in our roundup of the best SSDs.

By contrast, SSHDs only come in SATA format, and they tend to be laptop size, which is often referred to as 2.5″. But watch out: many laptops only have room for drives 7mm high, but some SSHDs are 9.5mm high.

Is SSHD best or SSD?

Even now, SSDs are still more limited on storage capacity than traditional hard drives. The largest are around 4TB, but at about £650 / $700, they are too costly for most people. Even 1TB is around £150 / $150, so many buyers choose a 250- or 500GB model such as the Samsung 860 Evo. Those are prices for standard SATA drives: NMVe SSDs are more expensive still.

By contrast a 2TB SSHD such as Seagate’s FireCuda, is under £90 / US$90 and is the best compromise if you want a balance of storage space and performance.

An SSHD is still slower than even a SATA SSD, but it’s a good chunk faster than a plain old hard disk. Basically, if you want lots of storage at a reasonable price, an SSHD is a good choice. If your priority is speed and you want Windows to be more responsive, go for an SSD.

However, your choice may also depend upon whether you’re buying for a laptop or PC.

If you have a laptop with room for only one drive, the options are narrower. If you want the highest overall performance, buy an SSD. If you want the biggest amount of storage, buy an SSHD. (If you want to spend the absolute minimum amount of money, buy neither – go for a traditional hard drive. Read our SSD vs HDD guide for more details.)

Seagate’s SSHDs intelligently learn which applications you use most, and try to store those in the solid-state storage for faster loading times and better overall performance. An SSHD will also make your laptop boot faster.

However, although gains of between 2-3x can be seen for ‘cached’ data – i.e. programs and files stored in the SSD part of the drive – performance still falls short of a proper SATA SSD.

Be careful to buy a drive which will fit inside your laptop. Check the height of the existing drive before ordering a new one, as they do vary. Some ultra-portable laptops won’t accept a 2.5in drive at all, and require an even smaller 1.8in ‘microSATA’ drive (or an M.2 card as mentioned above).

Most PC cases have room for multiple drives, so there isn’t such a demand for SSHDs. Many new PCs come with both an SSD and a hard drive. Windows tends to be installed on a relatively small capacity SSD, say 250GB, along with a few apps and games, and the HDD provides lots of space for storing your music and photo collection which don’t demand fast storage.

The benefit of an SSHD, whether in a PC or laptop, is the fact you don’t need any special software or configuration. It works without you having to decide where to store files and programs. If you don’t configure Windows to store your documents on the hard drive (see our tutorial here for details on how to move program files from an SSD to a hard drive) it’s easy to fill it up to capacity.