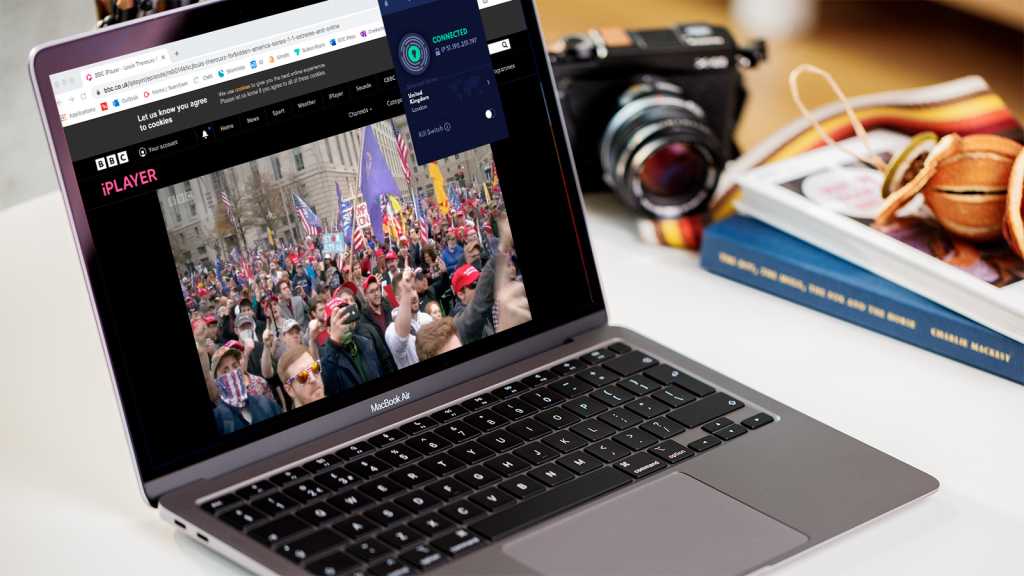 BBC iPlayer is a video streaming service which you can use watch live TV as well as shows on demand. It doesn’t require a subscription like Netflix does, but you can watch only if you pay a licence fee. Strangely enough, anyone can create a free iPlayer account without needing to prove you’ve paid – you just need a UK address.

For paid-up viewers, watching within the UK’s shores is a breeze. They can also download shows to watch offline anywhere in the world.

But if you’re abroad and want to watch Doctor Who, Top Gear or Frozen Planet II, then you’ll find yourself faced with a message saying that you can’t.

The Beeb says the correct way to watch iPlayer content abroad is to “download a programme on BBC iPlayer when you’re in the UK, you can watch it anywhere in the world.”

That’s all well and good, but what if you’re abroad before the next episode of your favourite show is aired? You can’t download it, so you’ll have to wait until you return home.

Maybe the UK isn’t your home, but you still want to watch. We’re not going to get into the rights and wrongs: we’ll simply explain how you can do it if you so decide.

And the solution is simple: use a VPN.

For the uninitiated, a VPN is an app which routes your internet connection through a UK server before it goes to the BBC. This means your real location is hidden from iPlayer and it thinks it’s serving up EastEnders to a viewer in the UK. You could be in Australia, Spain or anywhere.

There used to be other options, such as proxy servers, but the BBC has clamped down and will simply block any attempts to use one.

In fact, it’s important to know that it works hard to block VPNs too. It doesn’t want people watching outside the UK, which is why the Beeb and VPN services play a cat-and-mouse game of blocking and evading those blocks.

Not all VPN apps will unblock iPlayer, which is why it’s a good idea to use one that has a good track record of being able to do so. There are no guarantees, mind.

The bottom line is that if you want to watch from abroad, you need to install a VPN on your device (that could be a TV, phone, laptop, tablet, Mac or PC), connect to a UK server. You may need to choose a specific server from the list that’s optimised for iPlayer.

Once connected, you should be able to log into iPlayer (create an account if you don’t have one) and then watch shows as if you were in the UK.

Unfortunately, if you’re looking for a zero-cost option there are hardly any free VPN services that unblock iPlayer. You can find out why in our roundup of the best free VPNs.

This means watching iPlayer abroad is going to cost you, although not much at all. If you subscribe for a year, VPN services cost little more than a cup of coffee per month. If you just want to watch one show, you could sign up for a month which will cost around $6-12 (£6-12).

But it’s worth having access to a VPN service as it will be useful for a lot besides just iPlayer.

As mentioned, not every VPN can unblock the streaming service. Choose one of three below which are reliably good at unblocking it and, if you have problems, get in touch with customer service and they’ll typically tell you which servers are working, or another solution.

That’s not an exhaustive list: others will unblock iPlayer but those are the ones that have unblocked it consistently when we’ve tried them over the years.

If you’re watching iPlayer via a smart TV or streaming device (such as an Amazon Fire TV), it’s worth choosing a service that offers a VPN app you can install on your TV. Some VPN services offer a smart DNS which you can use on TVs, games consoles and media streamers such as the Apple TV which don’t support VPN apps.

Once you’ve got your chosen VPN service up and running, you’ll need to select the UK as the country (or server) and then connect to it. There’s usually a prominent Connect button, but tapping on the server in the list often starts the connection automatically.

Here are more recommendations for VPN providers with UK servers.

If you want to watch iPlayer outside of the UK on an Xbox or PlayStation then you can change your console’s DNS settings to some which will unblock the service.

If you head to the network settings and manually enter the DNS addresses you might then find iPlayer will play videos for you.

You can search online for free DNS servers for streaming, but they’re typically overloaded and therefore slow.

That’s why it’s a better idea to subscribe to a VPN service which has its own DNS streaming servers. They include NordVPN (SmartDNS) and ExpressVPN (MediaStreamer).

Simply use the DNS addresses provided by these services and enter them in your console or media streamer’s network settings.

Another option is to configure your router to run a VPN, which will let all connected devices use the VPN’s UK server. But this method is more of a last resort because not all devices will work well when forced to connect to the internet via a VPN.

The BBC requires that anyone using iPlayer is a UK TV Licence holder. We have a separate guide to who needs a TV Licence.

You also need a BBC account, which requires a UK postcode (and you need to be over 13 years old).

When you register for a BBC account (which is free) you’ll need to give your date of birth, gender, and email address, along with a valid UK postcode.

The BBC says that the aim of the account isn’t to pursue iPlayer users who haven’t paid for a TV Licence, but admitted that it will cross-reference the email addresses with people who’ve previously claimed not to need a licence.

If you’re a British resident with a paid-up licence fee, simply sign in to your BBC account and use a VPN service as described above. You’re still breaking the Ts and Cs by watching via a VPN, just like anyone abroad who signs up with a fake UK address.