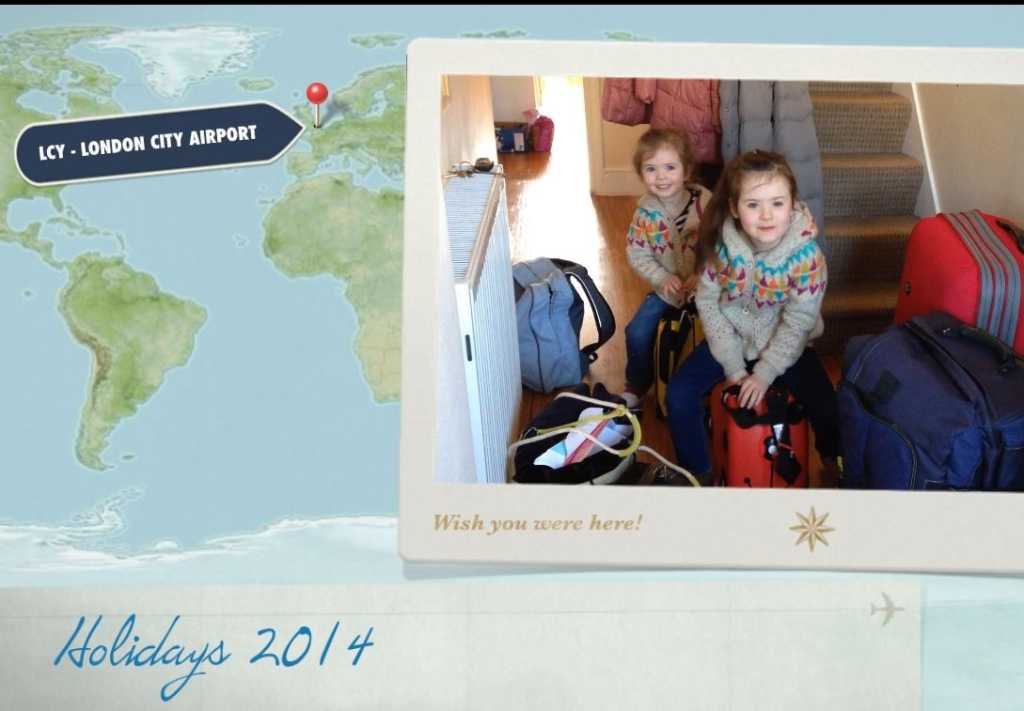 Don’t let all that great iPhone and iPad video go to waste: spend a few minutes editing it in iMovie and you can get stunning results. We explain how to use the app plus tips and tricks to give your movie that professional look.

Top-quality video editing software is expensive, so shelling out a couple of pounds on iMovie is a no-brainer. And if you have an iPad Air or iPad mini with Retina display, it’s free!

iMovie is quite basic, but it’s easy to use and can produce great results that will wow friends and family. It’s easy to share the finished movie, too, as you can upload to YouTube, iTunes Theater, Facebook, Vimeo and share it via iMessage.

We’re using the latest version of iMovie running on an iPad with iOS 7.

Step 1. This is optional, but much of your video will probably be on your iPhone rather than iPad. You can run iMovie on an iPhone, but it’s much nicer on an iPad’s bigger screen. To transfer videos between devices, simply use AirDrop. If your devices don’t support it, you can use a third-party app such as Simple File transfer from the App Store, or transfer the videos via iTunes. 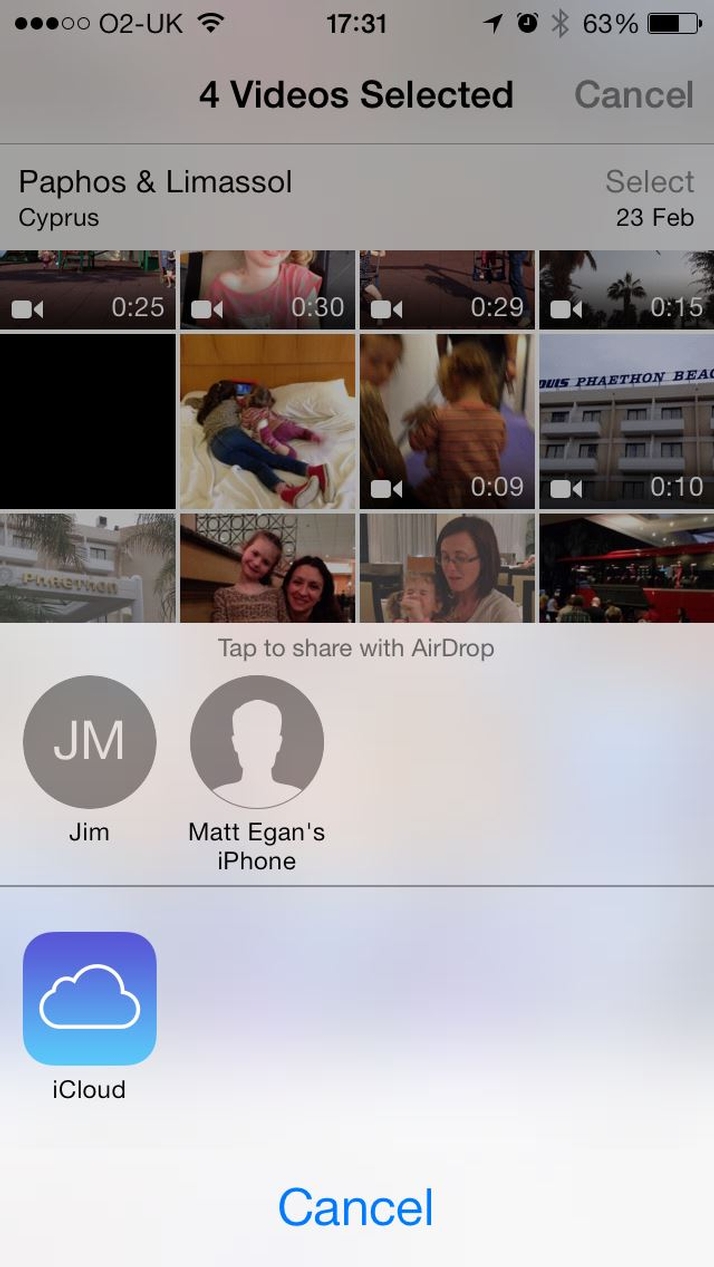 Step 2. Launch iMovie and tap the + button to create a new project. You can choose between a Movie and a Trailer. Trailers are fun, but we’ll focus on Movie mode here. Tap Movie and then choose a theme. You can tap the play button to watch a preview of each style.

Step 3. You can change the theme later, so don’t worry too much. Choose one and tap Create Movie in the top-right corner. You’ll see the editing screen, with your videos to the right, a preview monitor on the left and, running across the bottom, the timeline, which is currently blank. 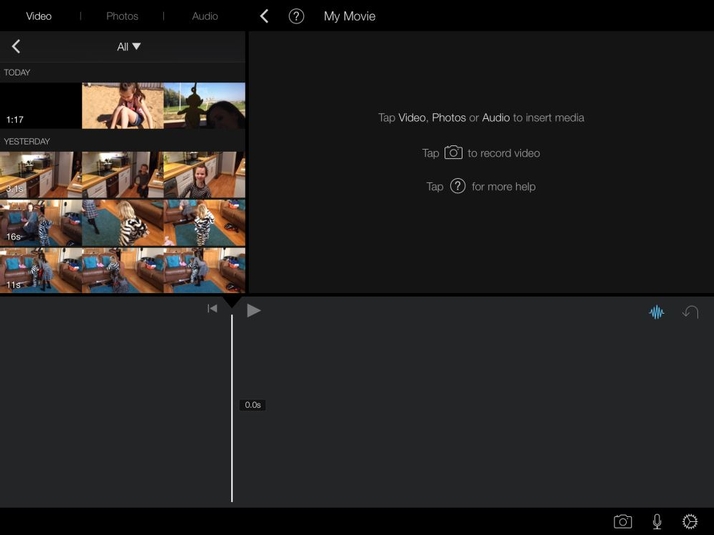 Step 4. Tap on a video and it will be highlighted in yellow. You can drag the left- and right-hand edges to trim the clip before you add it to the timeline, or you can add the whole clip (by tapping the downward arrow) and trim it later. 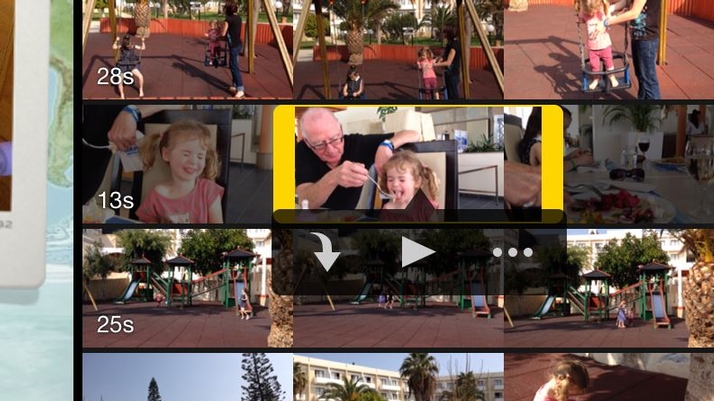 Step 5. You can zoom in and out on the timeline by dragging two fingers apart along the timeline, very helpful when making precise edits. For now, tap on the video clip to select it, and you’ll see some options appear at the bottom.

Step 6. Tap audio and you can adjust the clip’s volume. It’s useful to see the audio track, so make sure this is visible by tapping the squiggly line next to the undo arrow at the top-right of the timeline. Importantly, there’s also a Detach option, which we’ll use later.

Step 7. Tap the play button at the top of the timeline to play your movie. You can scrub through the clip by swiping left or right on the timeline. The white vertical line is the playback marker. Make sure the line is in the right-hand half of the clip before adding another video to the timeline. 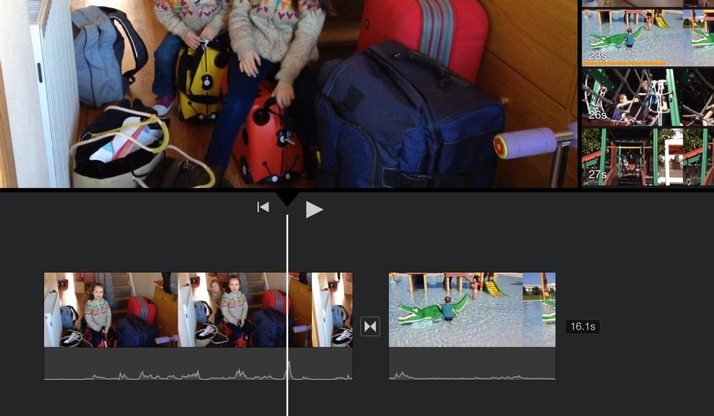 Step 8. Add another video to the timeline by repeating step 4 and you’ll see the transition icon between the clips. Tap it and the options appear at the bottom. The default is dissolve, but the others, left to right, are straight cut, theme special, slide, wipe and dip-to-black (or white).  The latter three have additional options when you select them. 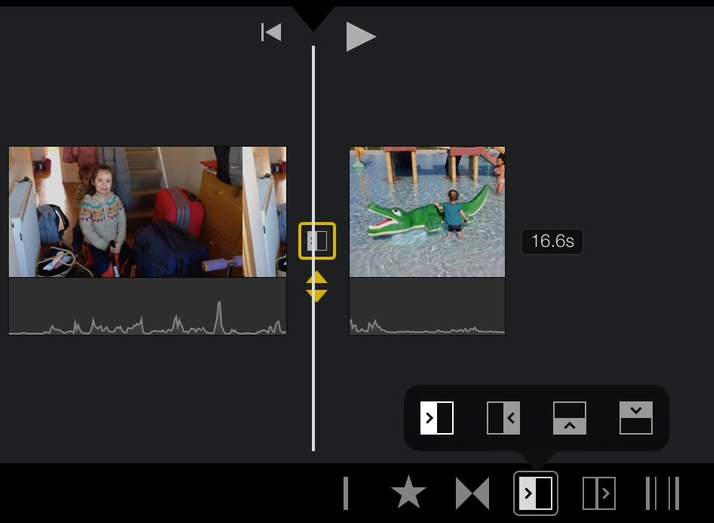 Step 9. You can change a transition’s duration by tapping the ‘1.0s’ option at the bottom right, and then choosing either 0.5s, 1.5s or 2.0s. Some transitions have a sound effect, which is muted by default. Tap the speaker icon to toggle sound on and off. 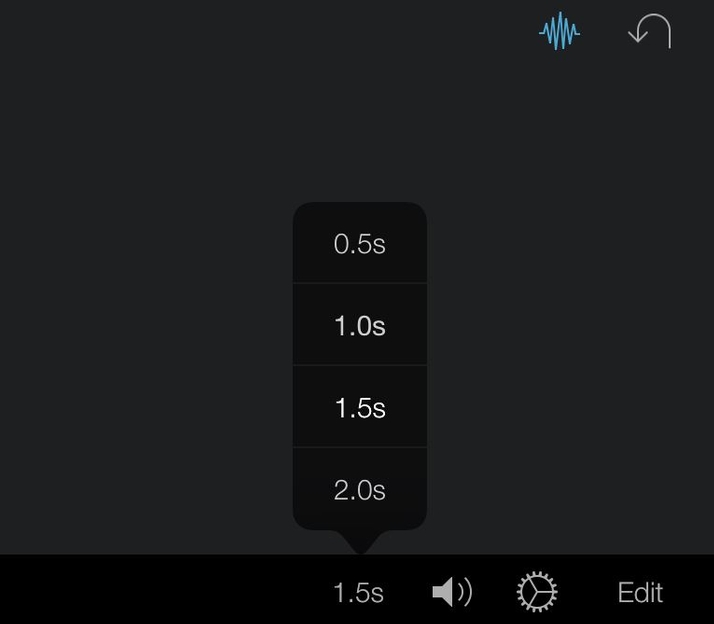 Step 10. Tap the first video on the timeline and then tap the Title option at the bottom right. Now tap Opening on the left and the theme’s title will be added to the clip. Simply tap on the text in the preview window to edit it. With this Travel theme, a marker points to a destination. You can alter this by tapping the pin icon and then typing in a place name. 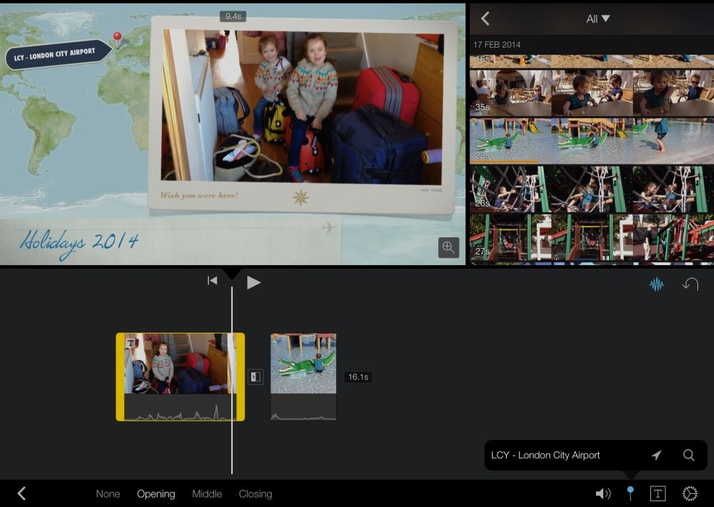 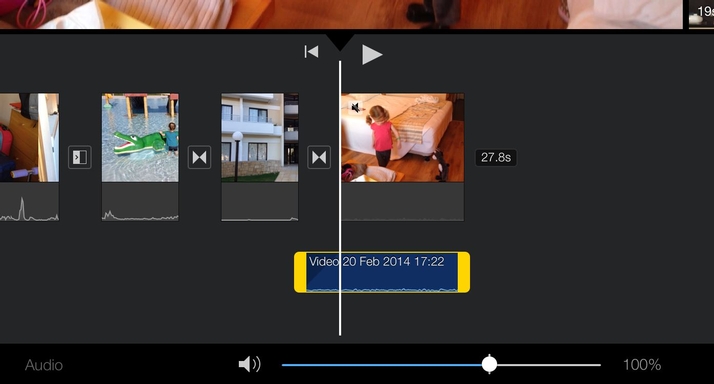 Step 12. As with video clips, you can tap and hold on an audio clip to move it on the timeline. However, to keep it in synch with your video, don’t do this. Instead, select the video to which it belongs and trim it by dragging the left-hand yellow bar to the right. The audio won’t be trimmed, and will extend beneath the previous clip – the establishing shot. 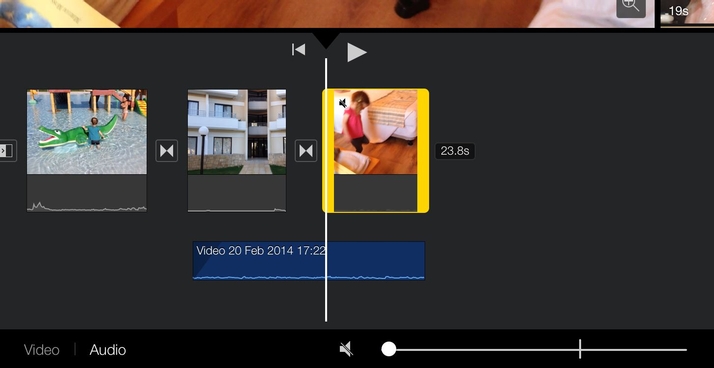 Step 13. By default, detached audio clips fade in, and you can change this by tapping the clip to select it. Now tap Fade at the bottom right and two yellow arrows will appear on the clip. Drag these left or right as you like to fade the start or end of the clip in or out. 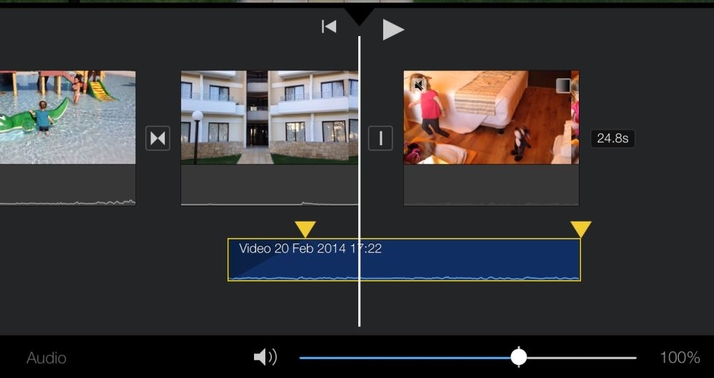 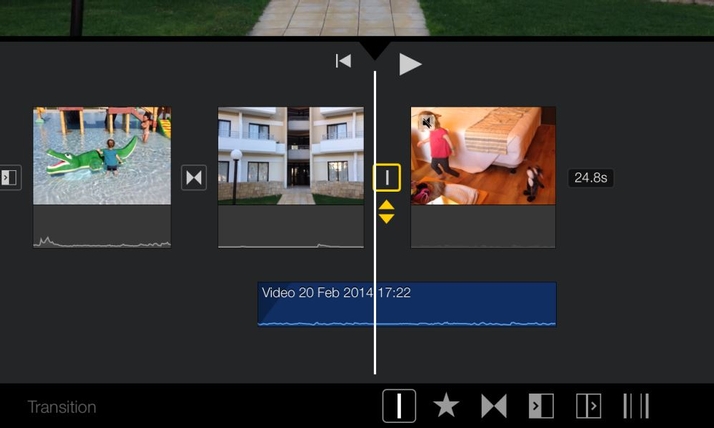 Step 15. You’ll want some background music, so tap the Audio button at the top-right corner of the screen. You can choose iMovie’s own music, or any other music on your iPad. Select a song and tap the downward arrow to add it to the timeline. 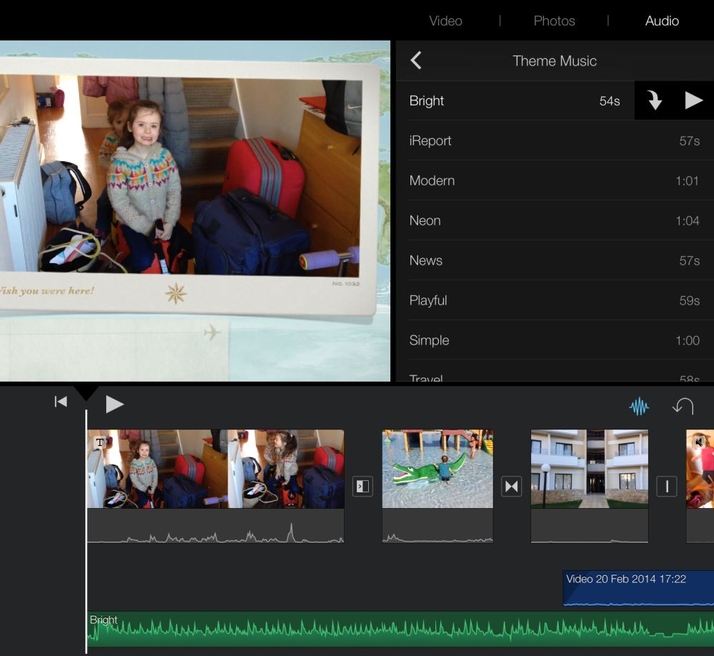 Step 16. iMovie doesn’t allow gaps, so it will insert the song at the start of your movie. If you don’t want that, or want to have a gap between songs, just trim the clip to the point where you want music to start, and use the slider at the bottom to reduce the volume to 0%. 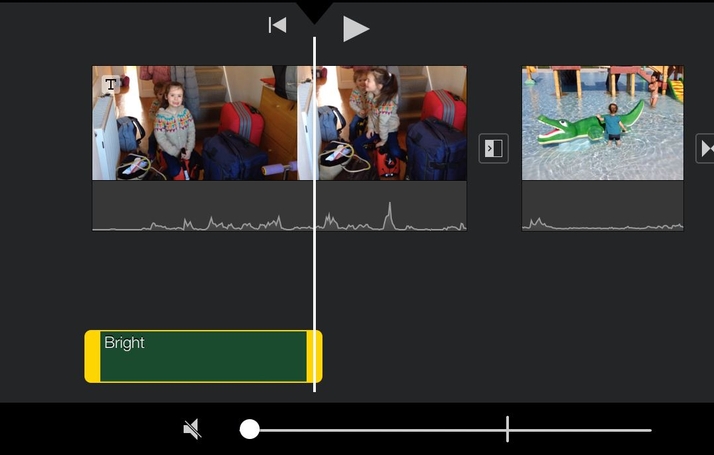 Step 17. Now you can repeat step 15, adding the song again (or a different song). There’s the same Fade option to fade the song in and out, and you can adjust the volume. Note that iMovie will automatically reduce the song’s volume during a video clip that has audio, but will otherwise play at the volume you set. 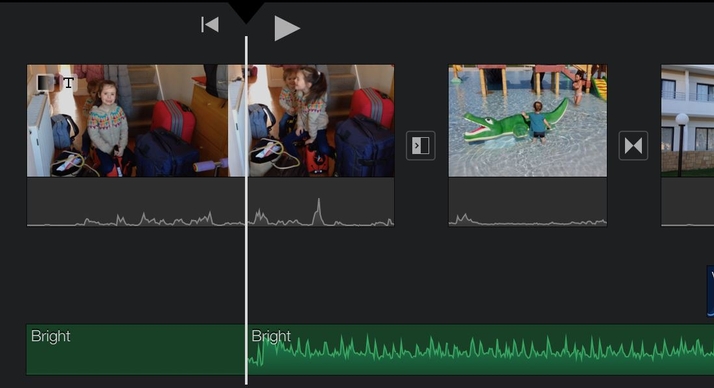 Step 18. Continue to add clips, and perhaps a closing title similar to the opening title in step 10. Tap on a grey area of the timeline to deselect any clips, then tap the cog icon at the bottom right. This offers options to fade your movie in from black and out to black, as well as letting you change the theme. Changing theme will change all titles, special transitions and even transition sound effects. 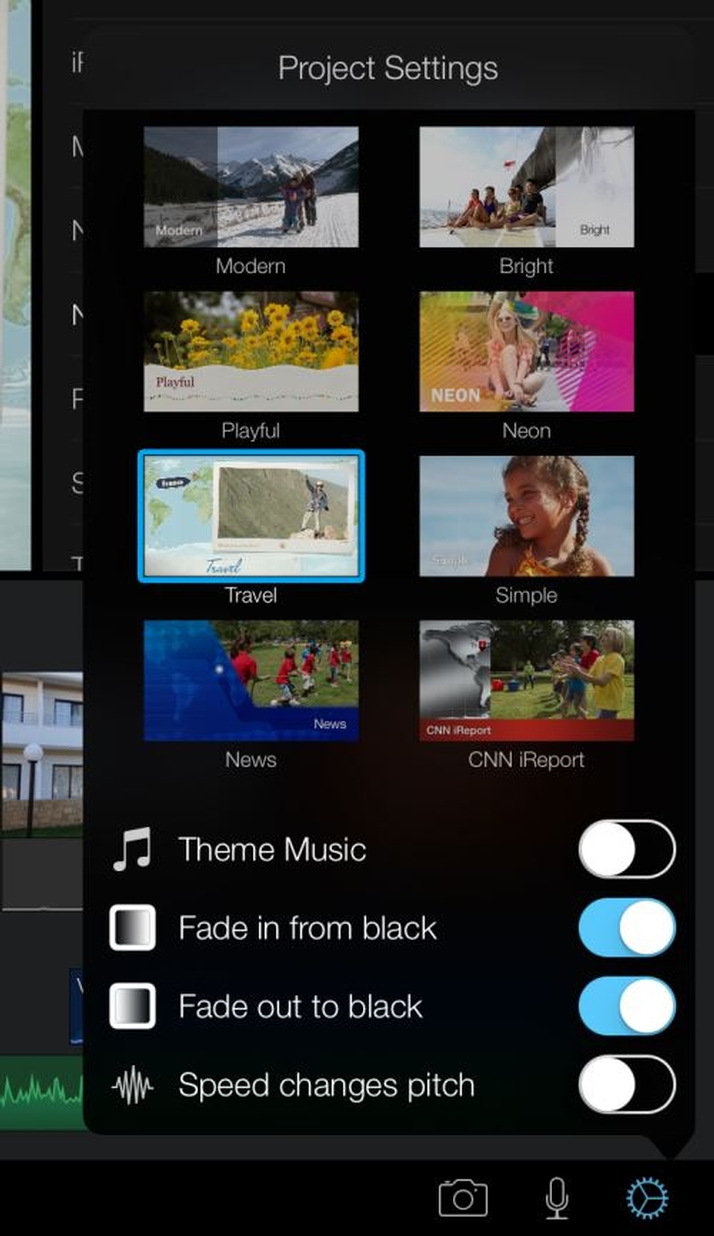 Step 19. When you’re finished editing, tap the back-pointing arrow in the top-left corner and you can tap on the title to edit it. The play button lets you watch the movie full-screen, and tapping the clapper board takes you back into editing mode. Tap the upward-pointing arrow to share your creation. If you want to have the movie in your Camera Roll, tap Save video and then choose the highest quality (usually 1080p). 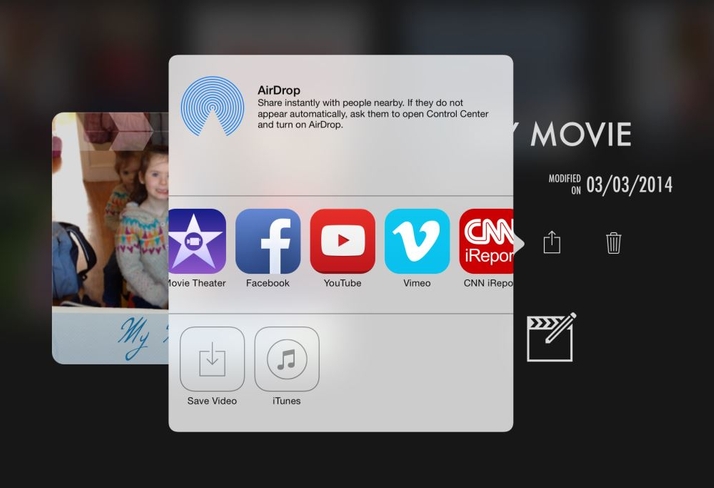