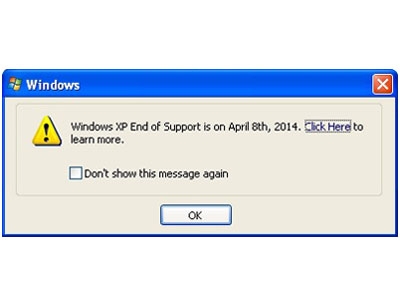 Should XP users upgrade to Windows 8? Microsoft thinks so, and it has outlined its argument in a blog post and a ‘help’ page on its website. Here we explain Microsoft’s position as it prepares to stop supporting Windows XP, and outline your options if you are still using a PC or laptop running Windows XP.

What does the ‘Windows XP End of Support’ pop-up mean for XP users?

First of all, the pop-up notification (above) is genuine. Plenty of readers have contacted us asking if it’s really from Microsoft, and if it’s safe to click on the dodgy-looking link. It should be safe, but just in case any scammers create their own version of the pop-up in order to try and trick you into giving your personal details, here’s the page on Microsoft’s site to which the pop-up links: https://www.microsoft.com/en-us/windows/business/retiring-xp.aspx

The End of Support for Windows XP doesn’t mean that Windows Update will suddenly stop working. It simply means that no new Windows updates will appear.

So what do this mean for you, or any of your friends who still use computers running Windows XP? After April 8th, there will be no instant meltdown. Your PC will continue to work. However, there are implications for security and stability. End of Support means that any exploits found in newer versions of Windows are likely to be tested to see whether they can also be adapted to attack XP, and if they’re successful, there will be no help from Microsoft in fixing the problem.

It’s possible that there are individuals holding back exploits they have already found so they can unleash them after Microsoft has stopped producing updates – in effect ensuring these yet-to-be-exploited vulnerabilities never become fixed. Thus, similar to continued use of IE6 in by certain businesses, Windows XP will be more vulnerable than newer versions of the operating system to potential attack.

Indeed, Microsoft has helpfully given its own take on this. It says that XP infections will rise 66 percent after April 8. But then again, it would say that.

As I have said below, whatever version of Windows your computers run, you absolutely should have up-to-date antivirus, antispyware and a firewall, and you should keep all software as up to date as you can. No connected PC is 100 percent safe from attack, so the question is degrees of vulnerability. A PC running Windows XP is in principle at least less secure than is a Windows 8 PC. But that doesn’t mean you will be a victim any more than it means Windows 8 is invulnerable.

Windows XP End of Support: what are your options?

Microsoft seems determined to undermine Windows 8 all on its own. Not content with running that awful ‘honestly, Windows 8 isn’t as bad as you think’ ad campaign, late last week Microsoft posted a blog urging readers to ‘help’ their friends upgrade from Windows XP to Windows 8.1.

After a bit of crawling about how nobody who reads Microsoft blogs could possibly be so pea-brained as to still run XP, we get to the meat of the matter. Microsoft is going to stop supporting Windows XP on April 8th, and it has created this page to explain the options for Windows XP users when the support deadline passes. And what are those options, according to Microsoft?

Well, let me see: upgrade to Windows 8 or buy a new PC.

The more cynical of you may have noticed that the two options outlined by Microsoft share in common the fact that they help to line Microsoft’s pockets. It won’t have escaped the more sharp-brained that there is a third option: to keep running XP.

I’m on record as saying that I like Windows 8. And I do. It is stable and fast, and the irritations of the Modern UI Start Screen are more than countered by the benefits of Windows 8, such as baked in antivirus. Indeed, because of the latter feature I think the world would be a better place if everyone currently running XP upgraded to Windows 8. And many could, given the relatively light system requirements of Microsoft’s newest desktop OS.

But I don’t think they have to. And I don’t like Microsoft’s messaging around this. So let’s look at what is going on.

Why is Microsoft killing XP? 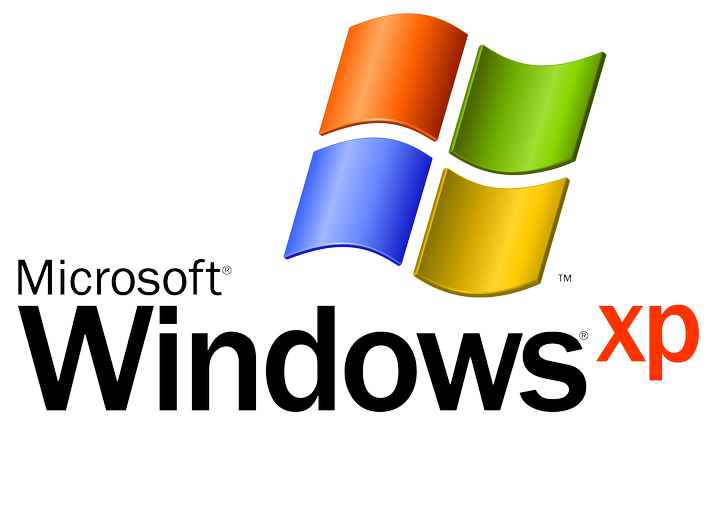 It’s Microsoft’s own (perfectly fair) decision to stop supporting XP. It has supported it free of charge for 13 years, and we are now three iterations beyond XP. It is reasonable to say that Microsoft has fulfiled its contract to users of XP. After all, Windows Vista came out seven years ago, so the end of XP can hardly be said to be a surprise.

Furthermore, stopping support for XP is not the same thing as killing it. XP will still work fine on April 9. All that is happening is that Microsoft will no longer provide free software patches for XP. More on this below.

Why are people still using XP?

There are reasons good and bad for people still running XP. On the one hand the car crash that was Windows Vista may well have put off people from buying new PCs or upgrading the OS. The economic climate over the past six years will have affected this too.

But it is a good thing that a PC from at least seven years ago is still fulfiling its purpose. It’s entirely possible that one of the reasons for the slow-down in PC sales is that older PCs are still working well. And that should be something Microsoft is talking positively about.

XP remains a stable and feature-filled operating system. And for many XP users it is still fit for service. 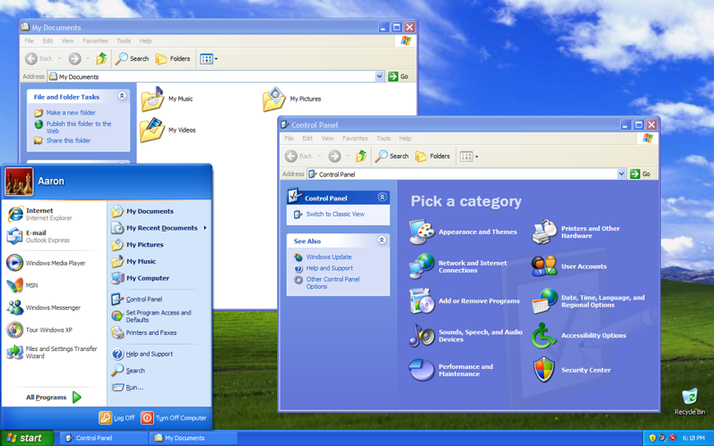 I really wish Microsoft would stop being defensive about Windows 8. But that’s just me. Upgrading to Windows 8 is a good thing, if your PC can handle it. You won’t regret upgrading – if you want to.

More disconcerting to me is Microsoft’s slightly desparate message, replete with a hint of blackmail, that we should ‘tell our friends and family’ that they need to upgrade or buy a new PC. It’s just not true, and it reflects badly on Microsoft to punt out this message.

Here are the facts about the XP to Windows 8 question:

– If you, or your friends and family, are okay running XP now, you will still be okay running XP the day after Microsoft stops supporting it. You will become less okay over time, however. This relates to security and the availability of third-party software and hardware. (Whatever OS you use you absolutely should be running up to date antivirus, antispyware and a firewall, and you should keep all software as up to date as you can. See our Windows security tips for more. )

– If you can upgrade your XP hardware it would probably make sense to do so, but that depends on how easy it is to find the £99 to buy a Windows 8.1 licence. If you are strapped for cash you don’t need to upgrade.

– If you simply can’t upgrade your PC, you have to weigh up just how much you need or want a new PC. April 8 is not the deadline for you to decide. (Visit Windows 8 Advisor.)