Watch Dogs 2 was officially unveiled at E3 2016, showcasing a game that looks to be a huge improvement on the slightly disappointing original. With a new protagonist, new settings and, most importantly, new gadgets, Watch Dogs 2 looks to offer a much more exciting experience. Here, we discuss the Watch Dogs 2 release date, platforms, pre-order deals and the kind of things to expect from gameplay. See also: The most anticipated games of 2016 & 2017

Last updated to include a new trailer, news that the Watch Dogs 2 multiplayer has been taken offline and the discovery of a potential new Ubisoft game trailer within Watch Dogs 2.

Watch Dogs 2 was heavily leaked prior to its worldwide announcement at E3 2016 including its release date and even a part of the announcement trailer. So, when is it due out? We haven’t got too long to wait as Watch Dogs 2 is set be released in the UK on 15 November 2016 on the PS4 and Xbox One, with the PC variant following on 29 November. It’s probably worth mentioning that those who buy the PlayStation 4 variant will have access to downloadable content 30 days before Xbox One and PC counterparts.

So, where can you buy the game? As usual, Watch Dogs 2 is available to order via the likes of Amazon and GAME, with Amazon’s £42 listing being the cheapest we could find at the time of writing. However if you buy GAME’s £55 exclusive Deluxe Edition, you’ll get access to a few extra goodies including an additional Zodiac Killer mission, Outlaw pack and Stealth pack.

Those looking for something for a little more special can pick up the San Francisco edition which includes a collectors’ box, figurines, laptop stickers, DLC and more for £89.99 on Xbox One and PS4, and £74.99 on PC. 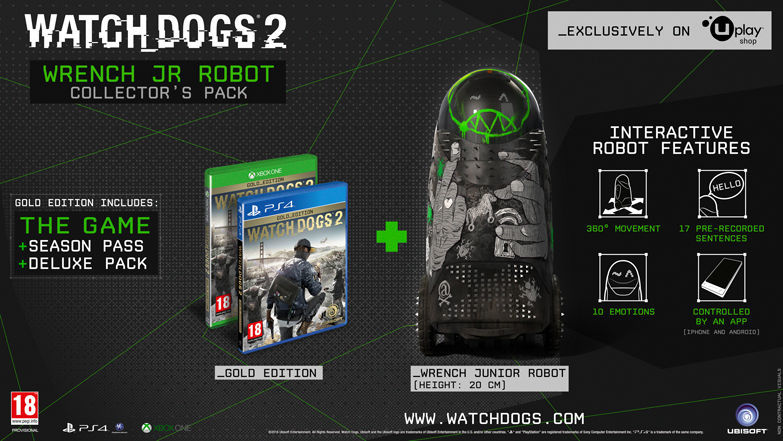 However, those wanting to go out can fork out for the Collector’s Edition, which comes with a deluxe version of the game complete with a season pass and, incredibly, a 7.8in app-enabled robot controllable via your smartphone or tablet. However, it costs a lot more than the standard edition at £114.99.

How to play Watch Dogs 2 at midnight

With Watch Dogs 2 being released at midnight tonight, how can keen gamers get their hands on the game right away? While GAME occasionally hosts its own midnight releases, there are no plans for this to take place with Watch Dogs 2 – however that doesn’t mean users can’t start playing at midnight. While those who want the physical copy of the game must wait until the morning of Tuesday 15 November 2016 to venture out to buy the game, those who opt to use online stores – PlayStation Store and Microsoft Store – can buy and download the game at midnight, with no need to wait.

Simply head to the PlayStation Store or the Microsoft Store at midnight UK time, purchase the game and download it – it’s that simple. Some stores may even allow for pre-downloading of the game, but this varies depending on the manufacturer. Those that want to play the PC variant when it comes out on the 29th can follow the same instructions using Steam.

Watch Dogs 2 is to take place in the bustling metropolis of San Francisco, a welcomed and refreshing change of scenery when compared to the dreary Chicago setting of the first game. The game is said to follow the same basic template as the original with all-round improvements, with Ubisoft Montreal adding a myriad of new features including a cool drone to be used for surveillance.

As with the first game, you’ll be able to hack and interact with a variety of Internet-connected objects around you, but in more interesting ways than the original game. Take cars for example – smart connected cars can be hijacked and remotely driven via your smartphone. Speaking of cars, there is a much wider variety now too – you’ll find anything from Ferraris to dune buggies, and possibly even helicopters. You’ll also be able to hack cameras, appliances and even electrical boxes to distract (and wound, if you choose) your enemies.

Melee combat has had an overhaul though, with a large emphasis on weapon customisation and player speed. You’re armed with a billiard ball attached to rope, which is enough to hurt the enemy but not kill them – a theme seen throughout the game with 3D printed stun guns, etc.

Watch Dogs 2 is also set to be the first open world game from Ubisoft to have no towers. Traditionally, Ubisoft’s games like Assassin’s Creed, Far Cry and the original Watch Dogs have towers that you need to climb in order to unlock missions and other features around you. Watch Dogs 2 does away with the towers and gives players more freedom to move as they please, exploring the world to discover new objectives.

A big part of the announcement of Watch Dogs 2 was the “seamless” multiplayer experience, a feature that allows gamers to randomly stumble across one another in the open world without the need for a lobby. While many had been excited to use the feature upon release, Ubisoft confirmed a day before it was due to be released that it’d taken the multiplayer servers offline. According to the company, users would experience lag and the game would even periodically crash, not ideal for such a headline feature.

Ubisoft hasn’t confirmed when the multiplayer servers will be back online, just that they’d be back online once the problem was fixed. We’ll update this section with more news when we receive it.

With Watch Dogs 2 only a day from release, a lucky group of people seemed to have got the game early – and the latest discovery could be the best bit of marketing we’ve seen from a game company for quite some time. NeoGaf user FlammableAce found the trailer and said “This wasn’t a main story mission, it was a (hidden?) side mission that opened up after I stumbled upon a guy on the phone who happened to be a Ubisoft employee talking about Assassins Creed Syndicate, Unity and ‘Osiris’ leaks“.

As you can see from the trailer above, the game has a very “No Man’s Sky” feel to it with bright, bold colours. It could just be a random trailer knocked up for Watch Dogs 2 and nothing more, but it could be a teaser of the next IP from Ubisoft. If the latter, it’s a phenomenal way to get the hype train going and we cannot wait to hear more about it.

For more information on Watch Dogs 2 gameplay, take a look at the below videos.

Days before its launch, Ubisoft launched the below trailer, helping to paint a picture of what you’ll be getting up to in Watch Dogs 2. See it below:

At Gamescom 2016, Ubisoft has revealed a new trailer for Watch Dogs 2. You can watch it below to see online features including co-op play, ‘Invasions’ and ‘Bounty Hunter’ mode.