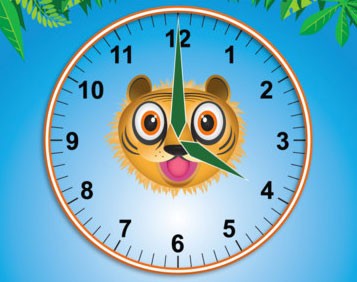 Teaching kids to tell the time is more difficult than it first appears. Big hand, little hand, 25 past, 25 to… Once you know it it’s easy of course, but when you start with a child you’ll get to see why it can be confusing.

As with many educational tasks there are plenty of iPhone, iPad and Android apps out there that will help you teach your kids to tell the time.

Here’s our round up of the best apps for teaching children the time on iPhone, iPad and Android.

Teaching kids to tell the time requires the parent or carer to be with the child when he or she is using the apps, at least to begin with. You’ll need to explain and be patient. Like I said, it’s not as easy as you think.

In the 12-hour clock you get two of each time. The day starts not at 1 o’clock as a child might think, but 12 o’clock. The hour hand can be practically touching the next hour digit but the child has to remember Five to Eight is still 7:55. There are two types of clock (12 hour and 24 hour), different ways of showing them (analogue and digital), and expressing them (numbers and words). Knowledge of quarter and half fractions is also useful, as is the five times table. See also: Best maths apps for children

Children need to understand that there are 60, not 100, seconds in a minute and the same number of minutes in the hour, but the Day is divided into two blocks of 12 hours, one usually also referred to as the Day and the other as the Night, although (depending on the time of year) the Day and Night last for longer or shorter times. It’s initially confusing. And you’re trying to explain this to a four-year old.

Different countries can’t even decide how to say the different time of day. In English “half two” means half past two (02:30). In Germany ‘half two” means half an hour till two (01:30). What the English and Germans are doing up at that time is another matter… Germans might say “three quarters three” to mean 02:45. Sounds mad to us, and I think it actually is.

Luckily we’re sticking to the English ways of telling the time, and what the best apps are for teaching kids how to tell the time from clocks, both analogue and digital, 12-hour and 24-hour.

As with all apps, especially educational ones, it’s great if you can try it out with a free Lite version. But seeing as most apps are pretty cheap it shouldn’t cost the Earth to get the right one for you. Our reviews will, we hope, help you get there faster.

We’ll be updating with more time-telling apps as we get them. 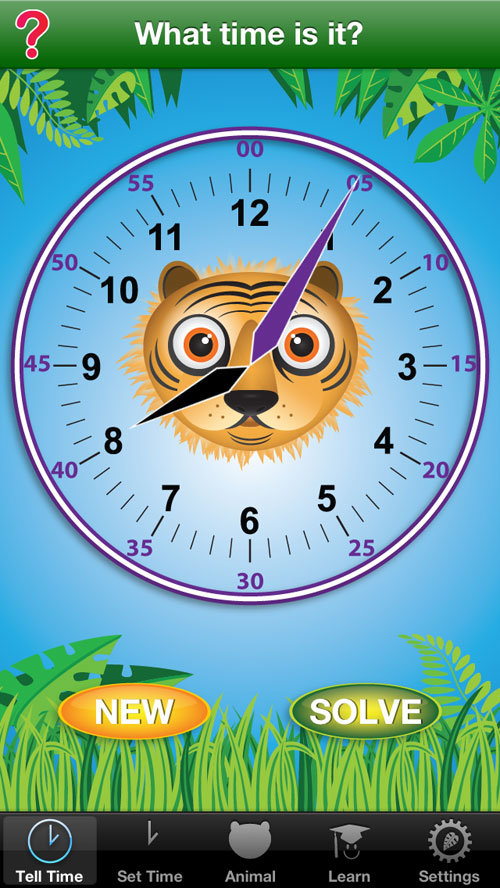 My daughter enjoys Jungle Time from Jungle Education, which is a telling-the-time teaching app that can be set at multiple skills levels, and teaches both the 12- and 24-hour clocks in both analogue and digital formats. It can also be set to roman numerals just to make things a little harder (unless you’re a Roman).

It’s fun, too, and engaging for kids as the clock faces can be set with different animal faces that smile, roar, etc, when you get the answers right. You can drag clock hands to set time like a real clock, and set digital times using the iOS scroller. 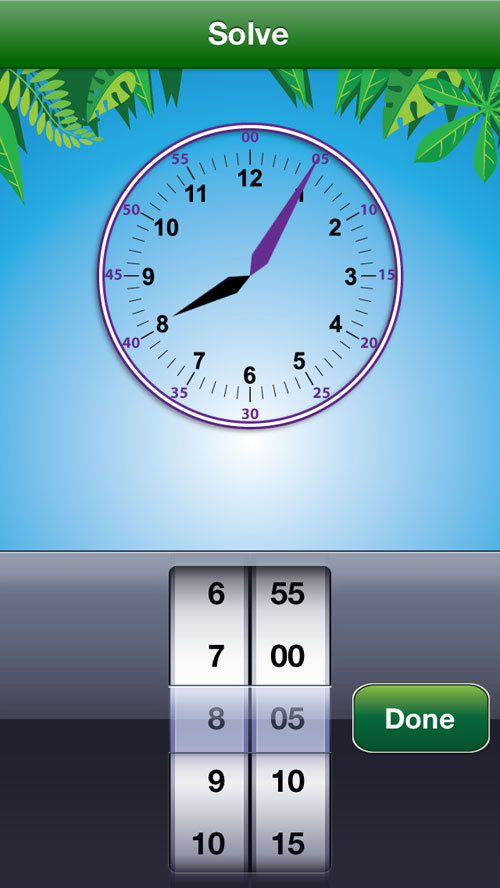 Jungle Time is one of our favourite educational apps for children. It has multiple levels of learning, looks great and works just like a clock. If you have to buy one telling time app then make it Jungle Time. 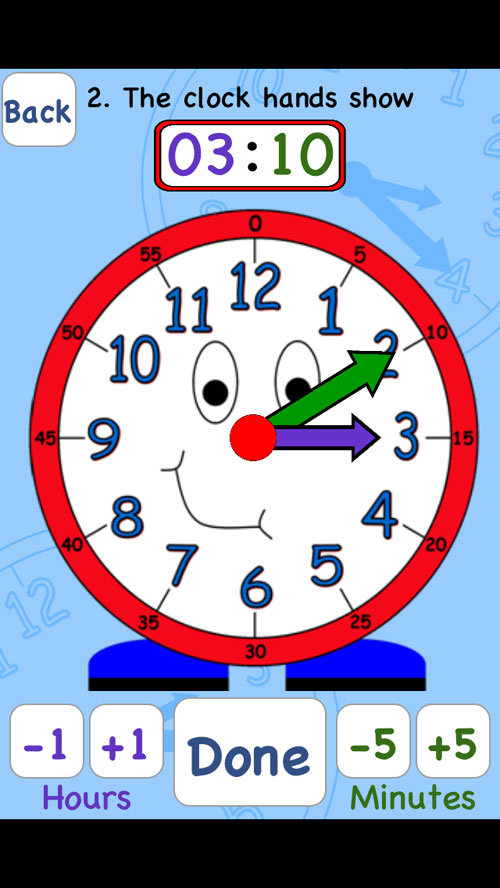 Tick Tock is a fully functional app for learning to tell the time. It can be set to multiple levels, which is important for time telling as you can start with the o’clocks and move up to Half Past, Quarter To, 25 past, etc. It’s more basic in looks than Jungle Time, with just a smiley clock face, but it does the job. And it’s only 69p. It makes a good companion to Jungle Time, as kids like variation in their learning apps. 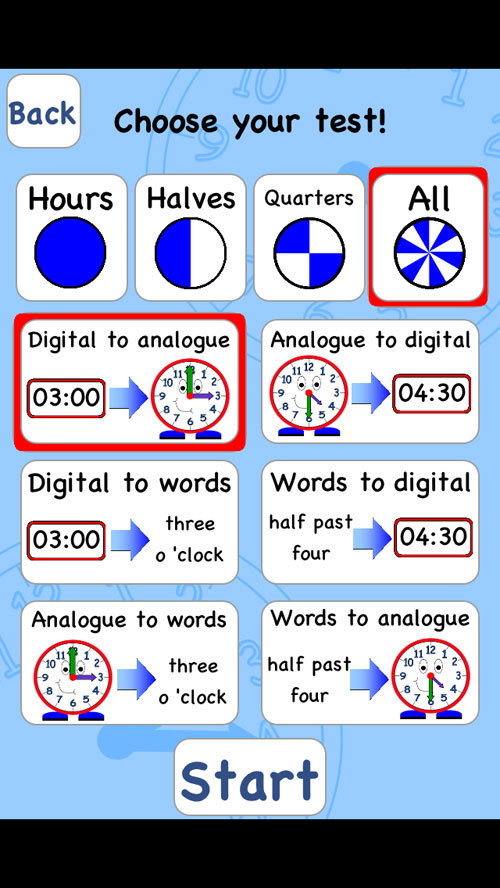 It teaches from digital to analogue and vice versa, digital to words and back again, and analogue to and from words. It takes a little while to work out the operation but once you understand it works just fine. 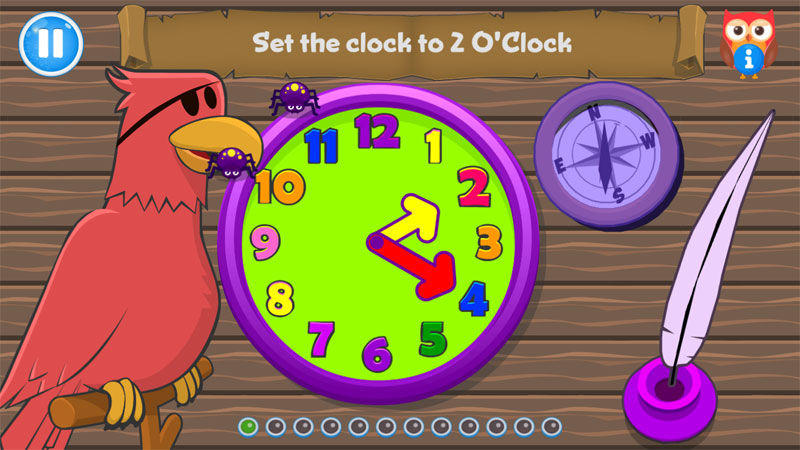 The comprehensive EduGuru Maths app includes a bunch of maths apps that test most of the fundamental early-learning skills and concepts. One of the games is Captain Clock, which seems to be under control of Pete the Parrot. Warning: parents may soon tire of Pete’s squawky voice.

There are three levels: Minutes, Hours, and Minutes & Hours. This is very much a basic telling-time game, but it is sophisticated enough to allow the player to move the clock’s hands clockwise.

On its own we’re not sure it’s worth the £1.99 but remember that this is just a small part of the whole EduGuru app, which we think is well worth the outlay. 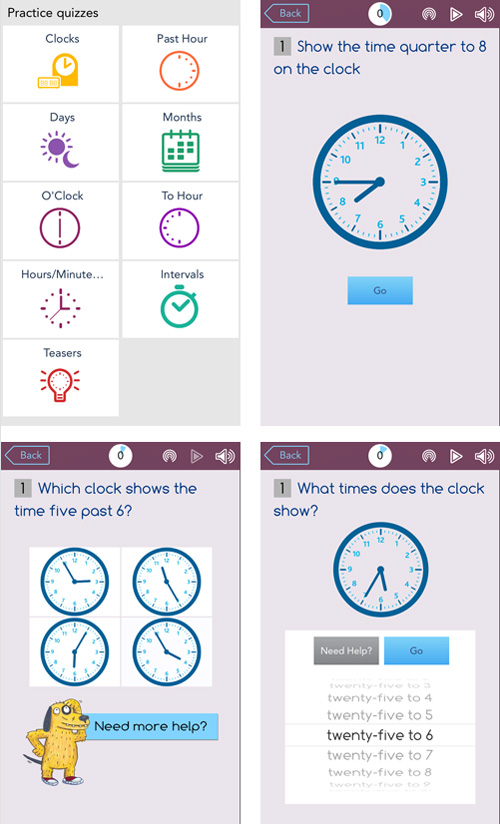 From the people who brought us the excellent Let’s Do Mental Maths apps Telling the Time covers three age ranges (4-5, 6-8 and 9-11), with each including practice of key concepts. The apps – developed by Aimer Media – help children progress from understanding o’clock, days and months to telling the time to the minute in 12- and 24-hour format as well as calculating time intervals and durations of train journeys.

Each app has three main areas:

1. Quick quiz is a quick selection of random questions that are different every time to help in deciding what to practice and when to take a progress test

The apps – for iPhone and iPad – cost £1.49 each, or £3.99 for all three. In our opinion a child who gets the idea of time might skip the middle app and go straight to 9-11, but the age ranges are directly linked to the National Curriculum programmes of study and the way in which it is covered during each year.

The older age groups increasingly link it to the use of time in general maths problems.

These apps are well designed and comprehensive. They maybe lack some of the fun features of apps such as Jungle Time, but if you want to get your child up to speed via National Curricullum standards by age range then you can’t do better. 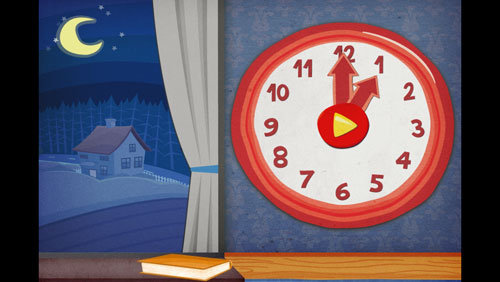 Around The Clock app review

Wombi’s Around The Clock doesn’t really teach kids how to tell the time. It’s more about learning about times of the day, which is also important and a good start for teaching kids about time and the clock. You play your way through a whole day where every hour has its own game. (There’s a free Lite version with a sample five games.) Games include making an alarm clock ring, breakfast, and packing your backpack.

It’s good for explaining that there are two 8 o’clocks a day, and differentiating between morning, afternoon, evening and night. But it’s built around hours only, rather than Half Past, Quarter To, etc, so is of less value than other apps, and is a little expensive in our opinion.