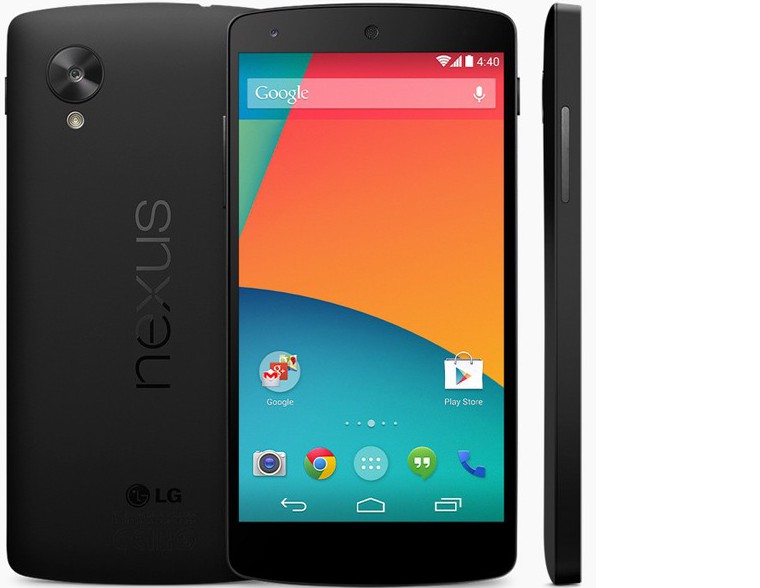 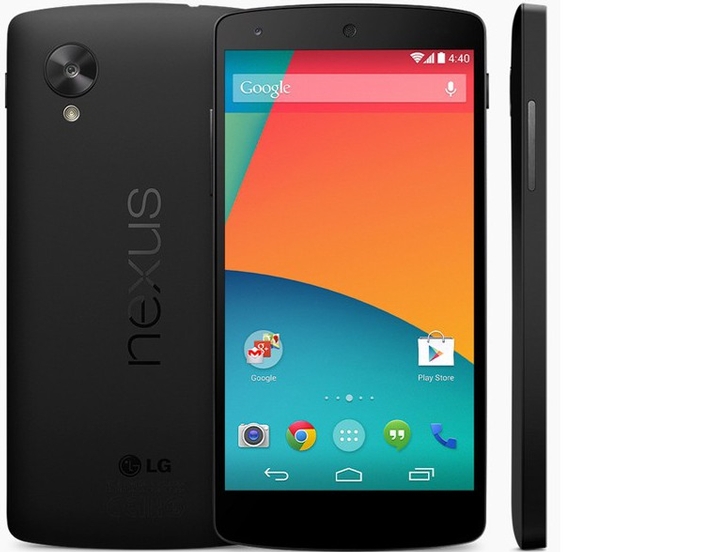 Confirmed: as we reported the Nexus 5 Android smartphone has been announced today. We’ve rounded up the UK release date, price and specs for the Google Nexus 5.

The Nexus 5 is Google’s next flagship Android smartphone. Here we find out what the Nexus 5 has to offer to rival the likes of the Samsung Galaxy S4, Sony Xperia Z and HTC One. We haven’t yet tested the Nexus 5 but a high-end  smartphone for less than £300 is a bargain even if it’s a bit limited on storage. See also: Google Nexus 10 2 (2013) release date, price and spec rumours.

As widely expected the Nexus 5 will be available in the UK from tomorrow, Friday 1 November. It will definitely be available from Carphone Warehouse and is available to order on the Google Play Store right now.

Google said: “Nexus 5 is available today, unlocked and without a contract, on Google Play in the U.S., Canada, U.K., Australia, France, Germany, Spain, Italy, Japan and Korea (and coming soon to India)” 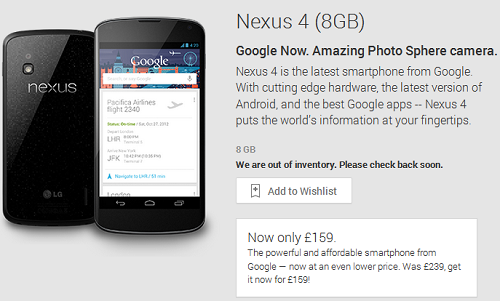 The Nexus 4 is now out of stock in the 8 GB and 16 GB models and Google is reportedly not planning to restock the device. So the Nexus 5 is where it is at.

The Nexus 5 has a 5in display, as the name suggest. Technically it is a 4.95in display with a nassive resolution of 1920×1080. That gives pixel density of 445ppi on this full HD IPS display. It will be tough too, being made of Corning Gorilla Glass 3.

You get 16GB or 32GB internal storage, of which KitKat will take some, but no opportunity for expansion.

Sensors include GPS and a Gyroscope, and the Nexus 5 has two cameras: a 1.3Mp front-facing webcam and an 8Mp rear-facing main camera blessed with Optical Image Stabilization.

Finally Google says the 2300 mAh battery will offer up to 17 hours of talk time, and up to 7 hours on LTE. But you can’t afford that much data anyway. Wirless charging is built in as standard.

Carphone Warehouse is selling the Nexus 5 for £295 SIM free, which is a great price for such a high-end handset. It’s priced at £299 for the 16GB model on the Google Play Store and £339 for the 32GB edition.

For the record Carphone is offering the Nexus 5 on contract for £32 per month, but take our advice and buy this handset outright. We haven’t yet tested it but at this price, like the Nexus 4, it looks like an amazing bargain. The first 1,000 customers who order a Nexus 5 on a 4G contract at Carphone Warehouse will get a free Nexus 7 worth £139.

In Google’s unveiling video of the Android KitKat statue, an unknown device with a Nexus logo was spotted (below left). Google has taken down the clip only fuelling the suggestion that the smartphone was the first sight of the then unannounced Nexus 5. 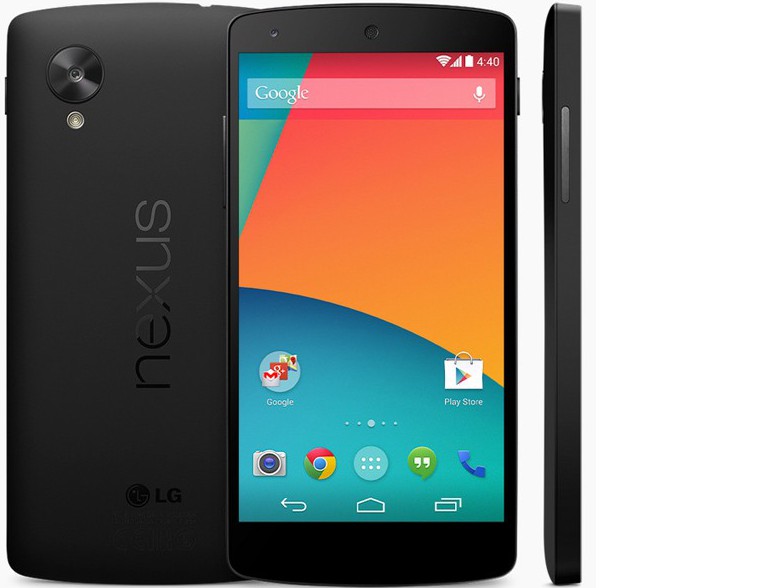 Following the KitKat statue unveiling, the Nexus 5 has been spotted in the wild. The owner happily left it charging in a bar unattended but a keen eyed employee snapped it up. 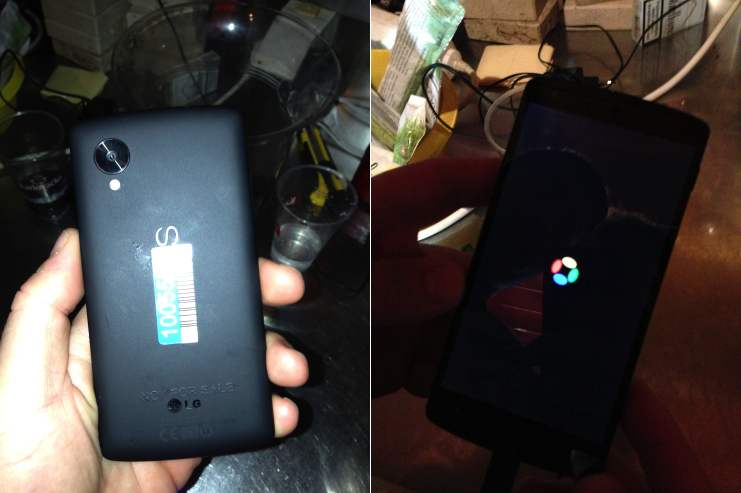 The Nexus 5 has been spotted once again, looking exactly like the photos from the bar . The lucky handler said the rear cover feeling similar to that of the Nexus 7 and the device is smaller than the recently launched LG G2.

“The screen was ok, didn’t wow me like the Note 3. The bezel is very small.” he added. 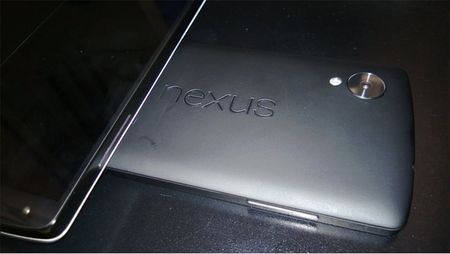 The Nexus 5 has been shown in great detail in this seven minute long video. Although the device has no Nexus logo on the back and therefor a prototype, it’s the clearest look at the phone we’ve seen so far.

Google, for a short time, posted the Nexus 5 on the US Play Store alongside the Nexus 7 and Nexus 10. It was listed with price of $349. 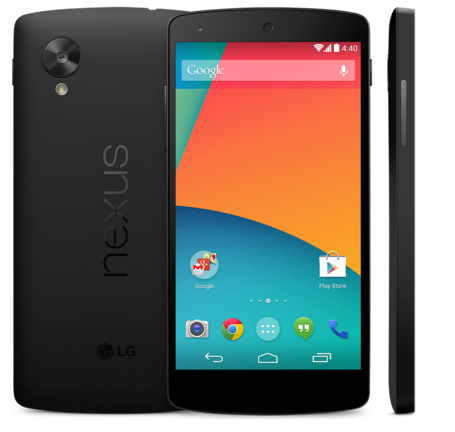 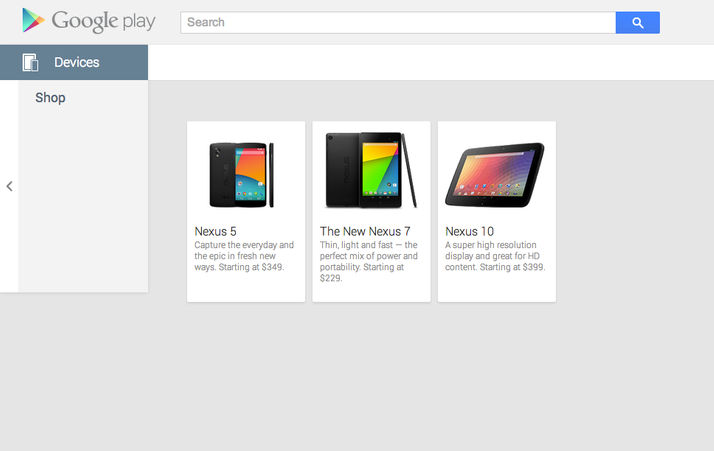