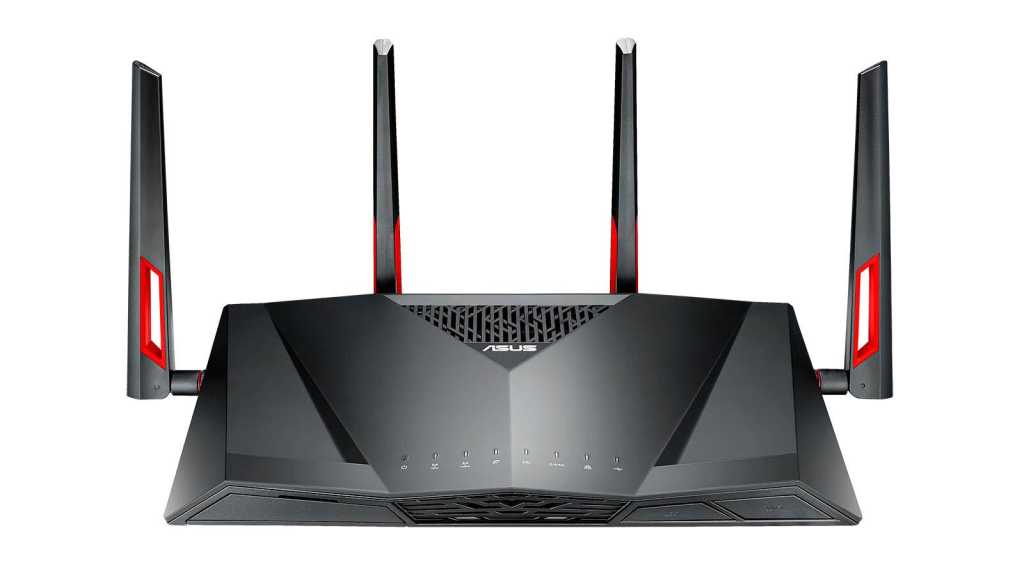 We all rely on Wi-Fi for an internet connection at home but if you live in a flat or have a lot of close neighbours, all the routers will be competing for ‘space’.

Wi-Fi is designed for this, and there are different channels – much like you’d find on a walkie-talkie – so that the signals don’t overlap and cause problems.

Some routers are smarter than others, and the best ones will automatically change channels when necessary to avoid conflict with neighbouring networks. Others won’t, and this is when you could experience problems such as very slow speeds while browsing the web, or constant buffering while trying to watch something on Netflix.

It’s possible there’s a different problem and that changing Wi-Fi channels won’t fix it.  But if you’re sure it’s not your broadband provider or your device (always worth restarting your router and device as a quick fix), then it’s worth taking a look and finding out if multiple Wi-Fi networks are using the same channel.

If it’s poor Wi-Fi coverage causing the problem, it could be fixed by buying a mesh Wi-Fi kit – such as the great-value TP-Link Deco E4 – but if you can see your device has a strong Wi-Fi signal, slow speeds can be due to interference.

You may know that Wi-Fi can use two main frequencies, 2.4GHz and 5GHz, and that there’s a choice of channel on each frequency. The best Wi-Fi channel is one that isn’t being used by all your neighbours.

By manually switching to a less-crowded channel, or one currently not used by any other networks, your Wi-Fi should improve a lot. We’ll show you how to identify which channels are most crowded and how to change channel on your router.

How can I see which Wi-Fi channels are busy and free?

You need to discover which channels are being used and you can do this with a free Android app called WiFi Analyzer. There’s a similar one available for Windows 10.

There isn’t a direct equivalent for iOS, and apps in Apple’s App Store aren’t allowed to report signal strength either, so it’s best to use Android or Windows apps.

Start by ensuring your phone or tablet is connected to your Wi-Fi network (as opposed to 3G or 4G) and then open the app. You can tap on 2.4GHz and 5GHz at the top to see how crowded each one is, and which channel your own network is currently using, plus how strong the signal is where you’re currently standing.

Note: Signal strength is measured in dBm, and a lower value is better. -30 is the best you can get, but anything down to -60 is a good signal. The minimum you want is -67dBm.

The app shows a graph of all the Wi-Fi networks in range and uses different colours to represent each network. You can also see the channels they are currently using along with the strength of signal (a higher curve is a stronger signal).

This will give you an idea of whether your network has a strong or weak signal and whether the channel is currently set to is crowded or not. This will help you decide which channel you need to use. It’s worth noting that out of 13 channels, all but 1, 6 and 11 overlap. So pick a channel as far away from your neighbours’ if possible. 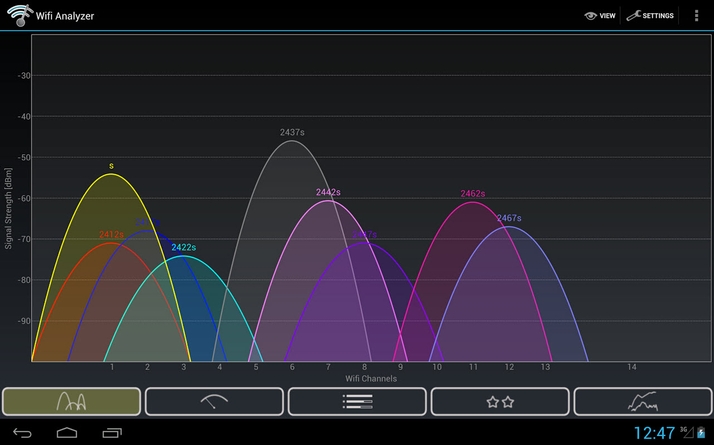 It’s the vertex (highest point) of the parabola which tells you which channel it is using. In the example above you can see the 2.4GHz frequency is very crowded and there is no obvious ‘best’ channel number. Our network is set to channel 6 and has the strongest signal, but three other networks still overlap it.

If your router and device (phone, laptop, tablet – whatever you’re using) also supports 5GHz, it’s worth seeing if that band is less crowded. Some routers have two separate network names which makes it easy to identify which is which, but others broadcast a single name and your phone decides to which network to connect. This isn’t great as it means you won’t be able to control which band it uses.

If possible, look for a setting in your router’s Wi-Fi options to check if you can force it to display the 2.4GHz and 5GHz networks separately so you can manually connect to the 5GHz one.

Both your router and your phone must support 5GHz Wi-Fi for this to work.

TIP: In order to stop your phone and other devices reconnecting to the crowded 2.4GHz Wi-Fi and only use 5GHz, you’ll need to go into the Wi-Fi settings on each device, find the list of networks and the 2.4GHz Wi-Fi network that your router is broadcasting. Select ‘Forget this network’ and it won’t be able to connect until you enter the password again.

After doing this, your device will only connect to your router’s 5GHz Wi-Fi, but bear in mind that 5GHz isn’t good for long distances and is often slower than 2.4GHz when you’re far from your router.

How do I change my router’s Wi-Fi channel?

You need to log in to your router’s web interface. This can be done by opening a web browser and typing in the router’s IP address. This number will either be printed in your router’s documentation or possibly on the bottom of the device itself.

If not, open a Command Prompt in Windows (PowerShell in later versions) and type ‘ipconfig’ without the quotes. Now look through the resulting text for the default gateway address. This is your router’s IP address, and will be similar to 192.168.1.1. For more help see our guide on how to connect to your router. 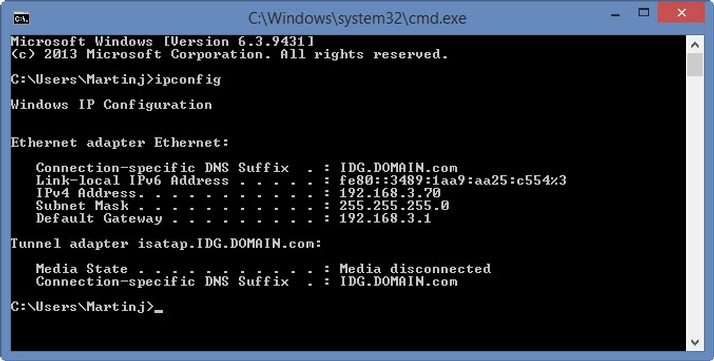 Using this default gateway address, type it into the search bar in your browser and your router’s admin page should be displayed.

Next you’ll be asked to enter a password (possibly a username too) and, again, it will either be printed on the router itself, on a sticker or card that came with it, or in the manual. Ideally, you should change the default password to prevent anyone else accessing the settings.

From the web page that is displayed, look for the Wi-Fi settings. The channel number should be selectable via a drop-down menu. Note that if your router does work on 2.4GHz and 5GHz, you will have to choose the channel separately for each.

Here, you can see the router is using channel 6 for 2.4GHz and 36 for 5GHz. It says Smart (Channel 6) because it will automatically switch to a different channel when there’s interference. If your router can’t do this, you’ll be able to select the channel number yourself. 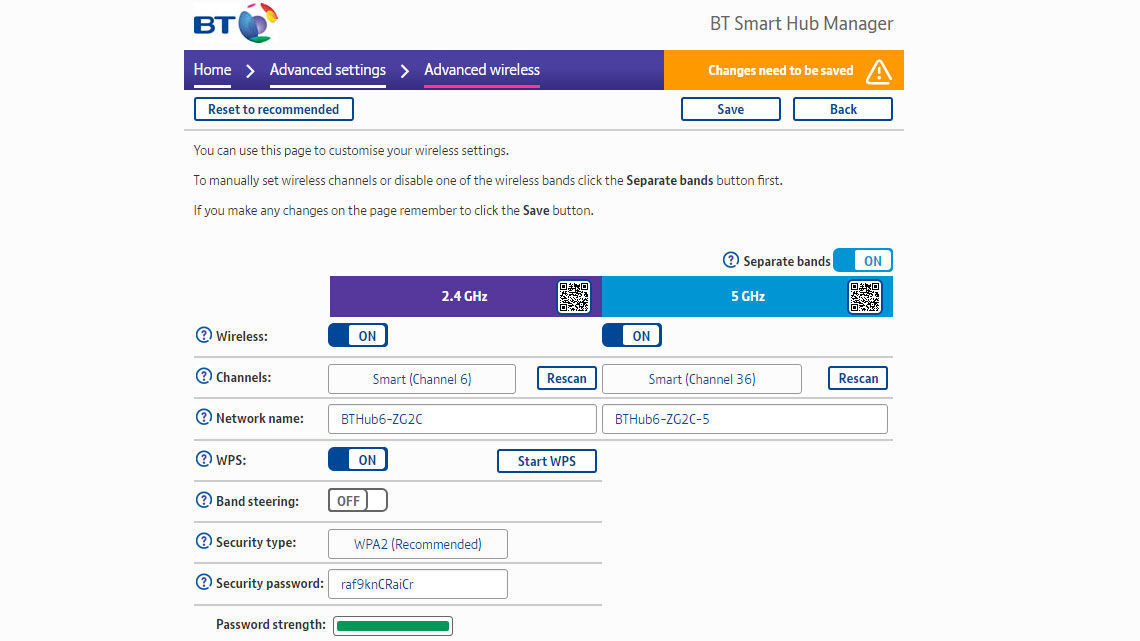 The exact location of the option will differ depending on the router manufacturer.

Make sure you save the settings before leaving the page, and your router may reboot to apply the changes.

Hopefully this will fix your problem, but in places, such as a block of flats where there are lots of networks in close proximity, you might struggle to find a better channel.