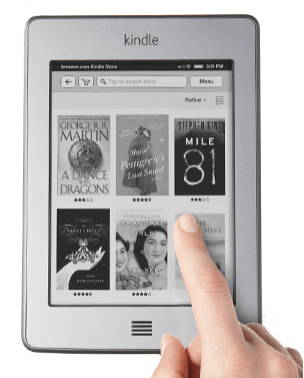 Amazon’s newest eReader, the Kindle Touch, hasn’t been made available in the UK.

The 6in device, which Amazon claims is the smallest and lightest eReader it has produced to date, was one of three unveiled today at an event in New York, which also saw the launch of the Amazon Kindle Fire tablet PC.

Unlike other versions of the Kindle, which have a keyboard, the Kindle Touch uses an infrared touch system that allows users tap the screen in specific places to access menus, while pages can be turned forwards or backwards by tapping the screen on the left or the right-hand side. It also comes with an X-Ray feature that provides contextual information about the eBook displayed on the device, and is eight percent lighter and 11 percent smaller than previous versions of the eReader.

Available in Wi-Fi only and 3G versions, priced at $99 and $149 respectively, the device was announced alongside a cheaper non-touch version, which will cost $79 in the US.

While this smaller and lighter version is available to pre-order in the UK for £89, the Touch and the Touch 3G are not listed.

Instead, Brits are being told they can still “buy the bestselling Kindle Keyboard 3G with free 3G wireless—no monthly bills or annual contracts—now for only £149, and Kindle Keyboard Wi-Fi for just £109.”

Amazon told us the Kindle Touch and Touch 3G are currently only available in the US but to stay tuned for more details.