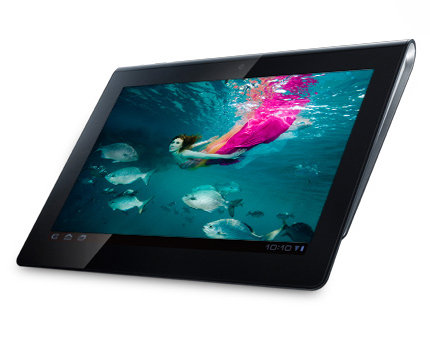 Sony Tablet S owners who bought the 9.4in screen Android slate over the last few days will find an update is ready for download. The Sony Tablet S went onsale in the UK on 16 September and is already proving popular with technology fans. However, Sony launched the Tablet S as an Android 3.1 Honeycomb device, promising an update to 3.2 sometime afterwards.

Often, such promises disappear almost as soon as they’re made. Not so, it seems with the Sony Tablet S: an update notification for the device available today is already delivering the update. However, a solid web connection is needed. The upgrade to Android 3.2 is a 181MB file which, over the PC Advisor office network at least, was reported as likely to take as long as three hours.

Among the new features is support for Sony’s video store, known as Video Unlimited. A spokesperson for Sony UK was able to confirm to us this afternoon that this will be available to Sony Tablet owners around 10 October. Around the same time – and certainly by the end of October – Sony will have all the Entertainment Network elements for its Android tablets in place. These include Music Unlimited – a variant of the existing Qrocity service accessible to Sony Bravia customers. The 10 million-song-strong download and streaming service will be rebranded Music Unlimited powered by Qrocity.

All titles offered through the Sony video network will offer a choice of standard definition and high definition films for rental. Sony cited a likely price differential of £3.99 and £4.99, though pricing will not necessarily be set by Sony itself. In common with the Sony Network Television service that Bravia TV owners can access, both films from the Sony Pictures film library and those from other studios including Warner Brothers and Universal, will be available via the Tablet S.

The rollout of the Sony Entertainment Network will also see the introduction of the Sony Reader Online Store around 30 October. The Sony PlayStation services that allow Tablet S and Tablet P owners to play their PS3 games on their Android tablets, will also go live in the next month.

Sony started selling the 16GB Wi-Fi version of the Tablet S in the UK on 16 September. A 32GB version and a 16GB Wi-Fi+3G version are set to go onsale in the next few weeks and will come with Android 3.2 preinstalled. The Sony Tablet range also includes a split-screen model called the Sony Tablet P.

Today’s updates are part of Sony’s preparation for these additional services. Sony’s spokesperson told us that in order to make use of them, Sony Tablet S owners will need to download the update to the Android 3.2. Once the services are live, a notification is likely to be sent to existing, registered customers.