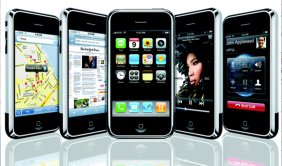 Apple has boosted the business credentials of the iPhone by licensing protocols from rival Microsoft to add Exchange support to the handset.

The company also unveiled a software developer kit (SDK) that hands over the tools third-party developers need to write native, rather than web-based, applications for the iPhone.

However, both new functions – Exchange support and the ability to install non-Apple applications – won’t be added to the iPhone until June, CEO Steve Jobs said.

At the event on its Cupertino campus, Apple executives said that the company had licensed Exchange ActiveSync from Microsoft, and would roll out Exchange support in the version 2.0 upgrade to the iPhone’s software.

“We’re building Exchange support so you get push email, push calendaring, push contacts, global address lists and the ability to remote wipe [the iPhone],” said Phil Schiller, the head of Apple’s marketing, according to a transcript of the event posted by Engadget .

No new applications need to be added to the iPhone, Schiller said, because messages, appointments and contacts transferred from a company’s Exchange mail server will end up in the iPhone’s existing email, calendar and address book apps. “The same email app, calendar app and contact apps that customers really love will get information directly from the Exchange server,” said Schiller.

A few enterprises have been testing the new Exchange support, Schiller said, citing both Walt Disney and Nike as early test sites. “I think when we release these features people will be blown away that the iPhone is the best mobile device ever in enterprise,” he added.

Another company official, Scott Forstall, who heads the iPhone software group, touted the SDK that Apple has released in beta form to developers. “Third-party developers can build native iPhone applications using the same SDK that we do,” said Forstall.

He also spelled out the frameworks and tools that developers will have at their disposal, including a variant of Mac OS X’s Cocoa application framework and Xcode, a source-code editor and debugger. The Cocoa variant, called Cocoa Touch, is an “advanced touch event system”, said Forstall, that lets developers access the iPhone’s touch and gesture features, including the accelerometer, the tiny sensor in the iPhone that automatically switches between landscape and portrait display modes as the phone is turned on its axis.

Other tools in the SDK include an interface builder and something new, dubbed iPhone Simulator, by Apple. “It runs on a Mac and simulates the entire API stack on your computer,” Forstall said.

He also demonstrated some preliminary work by third-party developers who had been asked by Apple to come up with something in two weeks using the SDK. Among the results: a bare-bones iPhone version of Electronic Arts’ game, Spore; data pulled from Salesforce.com’s software-as-a-service (SaaS) customer relationship management applications, and an iPhone edition of AOL Instant Messenger (AIM).

“I’ve never developed on a Mac before, never used Objective C, and we had a live buddy list in five days,” said Rizwan Sattar, a senior software engineer with AOL, as he demonstrated the instant-messaging client on the iPhone.

Third-party applications will be distributed via a new App Store, an online outlet for obtaining, as well as updating, third-party software, said Jobs near the end of the iPhone presentation. App Store access will be added to every iPhone in the next firmware upgrade, and applications can then be downloaded directly to an iPhone, or to iTunes – then later to an iPhone – via either Wi-Fi or the AT&T data network that steps in when wireless isn’t available. “[The App Store] will be the exclusive way to distribute iPhone applications,” Jobs said.

That won’t be for several months, however. Apple will package the Exchange support and App Store in Version 2.0 of the iPhone’s firmware. The free upgrade, Jobs said, will be released sometime in June.

Also scheduled for an upgrade at the same time is the iPod touch, the device that omits phone functionality but includes the rest of the iPhone’s feature set. Because of the way Apple accounts for iPod and iPhone revenues, however, the iPod touch upgrade will come with an undisclosed price, said Jobs.