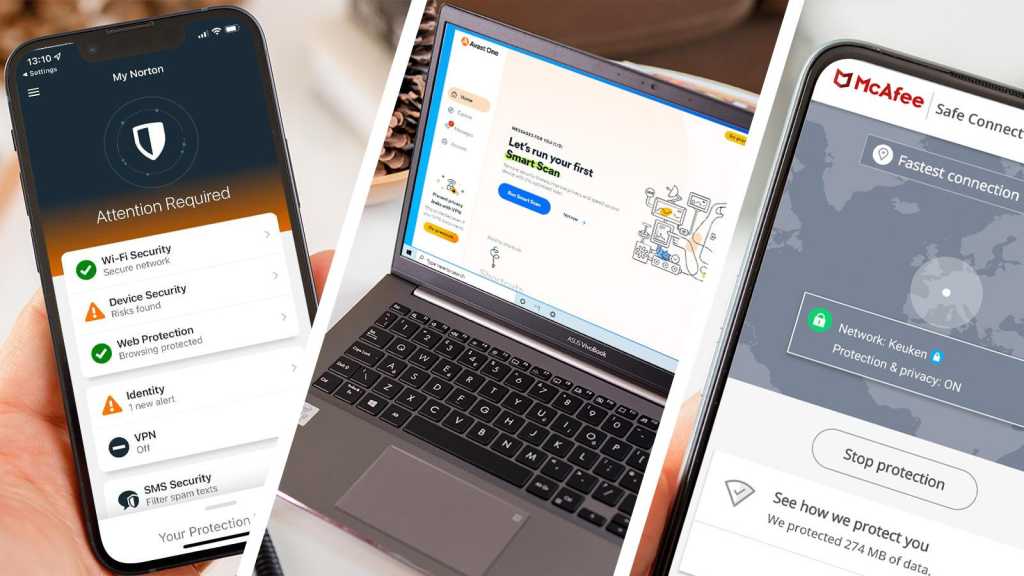 The need for good security software is greater than ever before. Antivirus, which used to be the only type of security you needed to buy, is just one form of defence against a multitude of threats that exist now.

The best security software will protect your devices from viruses, other kinds of malware, but will also help you to avoid so-called phishing attacks, which aim to trick you into handing over personal information such as login details, your name, address, bank account numbers and more.

In recent years, VPN services have also become hugely popular and offer a mix of security and privacy for browsing the web, shopping online and downloading files.

And that’s why antivirus companies started bundling VPN services in their security suites. More recently, VPN companies have begun to add antivirus to their services. All this with the aim of offering all-round protection under a single subscription.

Avast helps over 400 million users stay safe and private online. Our Award-winning Avast One app contains antivirus, VPN, privacy tools and more – for free. Reset your relationship with the internet with Avast One, the choice of experts.

VPN vs Antivirus: what’s the difference?

Antivirus is responsible for preventing malicious software from harming your device and its data. Ideally, it should block any threats before they are even downloaded to your device, but should also be able to detect any rogue files or apps already present, as well as scan email attachments.

Think of it like a shield that protects you from any internet nasties, regardless of what they do. Some might try to spy on you by recording what you type, or by using your device’s camera or microphone to watch and listen. Others might encrypt your files and demand a ransom to unlock them, while others still might just display unwanted adverts. Good antivirus software stops them all.

So, this is what antivirus does:

VPNs, on the other hand, are Virtual Private Networks. This is completely different to antivirus. A VPN creates a safe ‘tunnel’ between your device and the internet so that any data that travels through it cannot be seen by anyone wanting to find out what it contains.

A VPN makes it safer to use public Wi-Fi in cafes, hotels and airports, as well as safer to use the internet in general, preventing anyone seeing what you’re searching for online, which websites you’re looking at, and what you’re downloading.

As a totally separate benefit, a VPN can make it appear that you’re somewhere other than your true location. This allows you to access websites, videos and any other content that’s restricted to certain countries or regions.

These are the benefits of a VPN:

Why so few choices?

Admittedly, there aren’t loads of options here, but that’s because we’ve only listed the services we’d use ourselves. The others simply don’t make the grade… yet.

Bitdefender is one of these. It is renowned for its excellent malware protection, but although it bundles a VPN service, that’s limited to only 200MB of data per day. If that wasn’t bad enough, you can’t choose a server or location: it picks the best one for you automatically, so it’s no use for unblocking websites or streaming services.

Both NordVPN and Surfshark have added antivirus to their VPN services: Nord provides this for free and Surfshark does if you pay extra for its ‘One’ bundle. Unfortunately, neither of these has been through any of the independent test labs yet, so it’s not possible to say how they compare to the best antivirus out there. Yes, we could attempt to run some tests ourselves, but testing the effectiveness is highly specialised and that’s why we defer to the labs results instead of relying on our own.

Also, Surfshark’s antivirus doesn’t yet offer real-time protection on Windows, only on Android, so we certainly can’t recommend it on that basis. You’d be better off using Windows’ built-in Microsoft Defender.

We’re assured that both companies have submitted their antivirus for testing, but for now, here are the best antivirus with VPN services you can get. 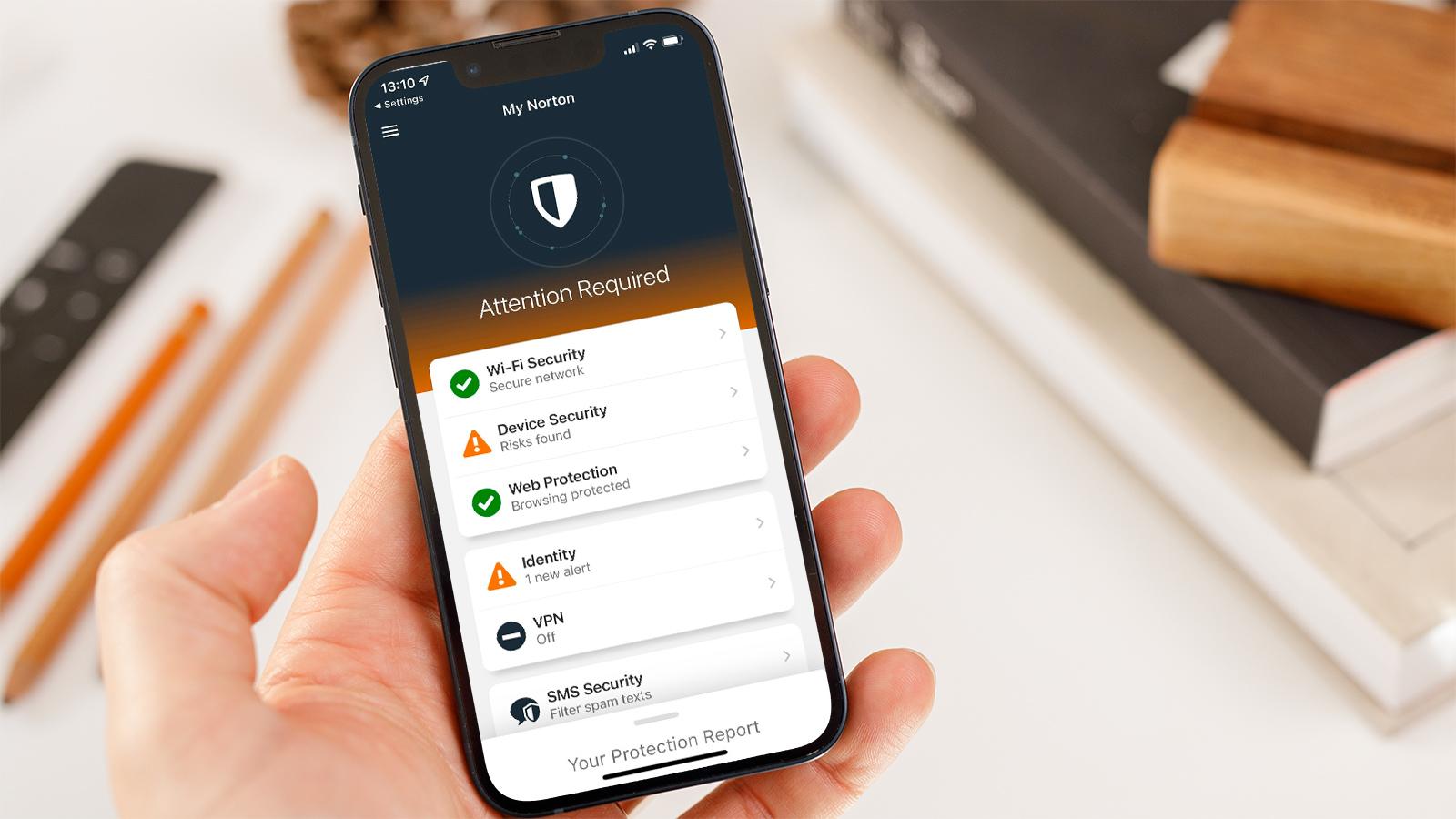 Norton is one of the best-known names in security, and also one of the most trusted. There’s little need to talk about how great its antivirus is: it’s had three decades to hone that to near perfection. (It also offers a 100% virus guarantee, so if some malware  does make it onto your device and Norton’s techs can’t remove it, you can claim your money back.)

The VPN side of things has improved significantly over the past year or two, to the point where we’re happy to recommend it as a great alternative to the best standalone VPN services. It has been developed by Norton, rather than being bought in and branded as Norton – something that’s fairly common with other antivirus software providers.

Norton’s VPN has no data limits, so you can use it as much as you like. We also found that it was  able to unblock US Netflix and Amazon Prime, which is good news if you want to watch those but don’t live in the US. It doesn’t unblock everything, and there are no apps for  smart TVs or streaming devices, but it does let you choose from a list of 29 countries, and blocks ads when the VPN is connected.

On Windows and Android, you can even download torrents by selecting Torrent-optimised region from the list of locations. We’d still like to see a kill switch added to the iOS app, but there is one in the Windows and Android apps.

Beyond antivirus and VPN, Norton 360 Deluxe has plenty to offer, including 50GB of cloud storage, a password manager and identity protection.

If you want a single subscription for all your security needs, Norton 360 Deluxe is very difficult to beat. 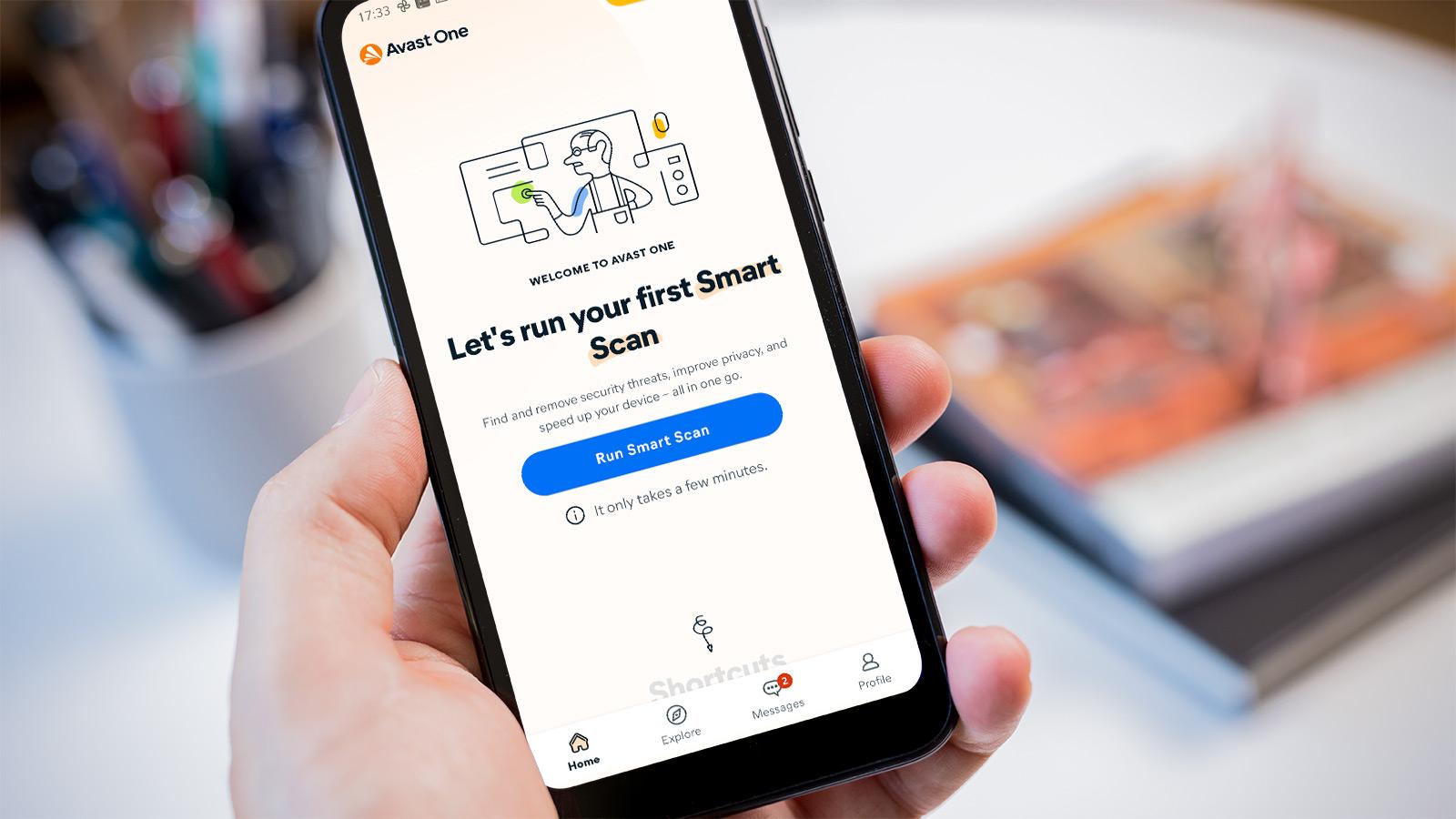 Avast One is a new offering from Avast, which is well known for its free antivirus. It’s available for Windows, Mac, Android and iPhone.

On the antivirus side, it uses exactly the same ‘engine’ as the paid-for Premium version of Avast One, so you’re getting the same top-notch protection without paying. And top notch it is, with excellent ratings from the virus test labs we follow, and it also warns you of potentially dangerous websites – you just have to install the browser extensions. Plus, it automatically protects the files and documents in common folders on Windows from ransomware.

We’re big fans of the cartoon-y interface which is clear and easy to understand, and offers both dark and light modes.

Of course, there’s also a VPN as part of the bundle, and this is where the free version places some limits. You can’t select a location from the 35 countries available to paying users: it just connects to the fastest available server.

That means you can’t use it to unblock US Netflix or other streaming services. However, it does grant you 5GB of data per week which, considering you won’t be using it to watch video, is absolutely loads.

It’ll remind you when you might need to turn on the VPN, and it’ll do this when you’re on a shopping, banking or other ‘sensitive’ websites. It can also be set to connect to a server when your device connects to an untrusted Wi-Fi network. Unfortunately, there’s no kill switch to protect your real IP address and data from ‘leaking’ out if the VPN connection ever drops.

But, for free, you’ll struggle to find a better antivirus and VPN bundle than this. 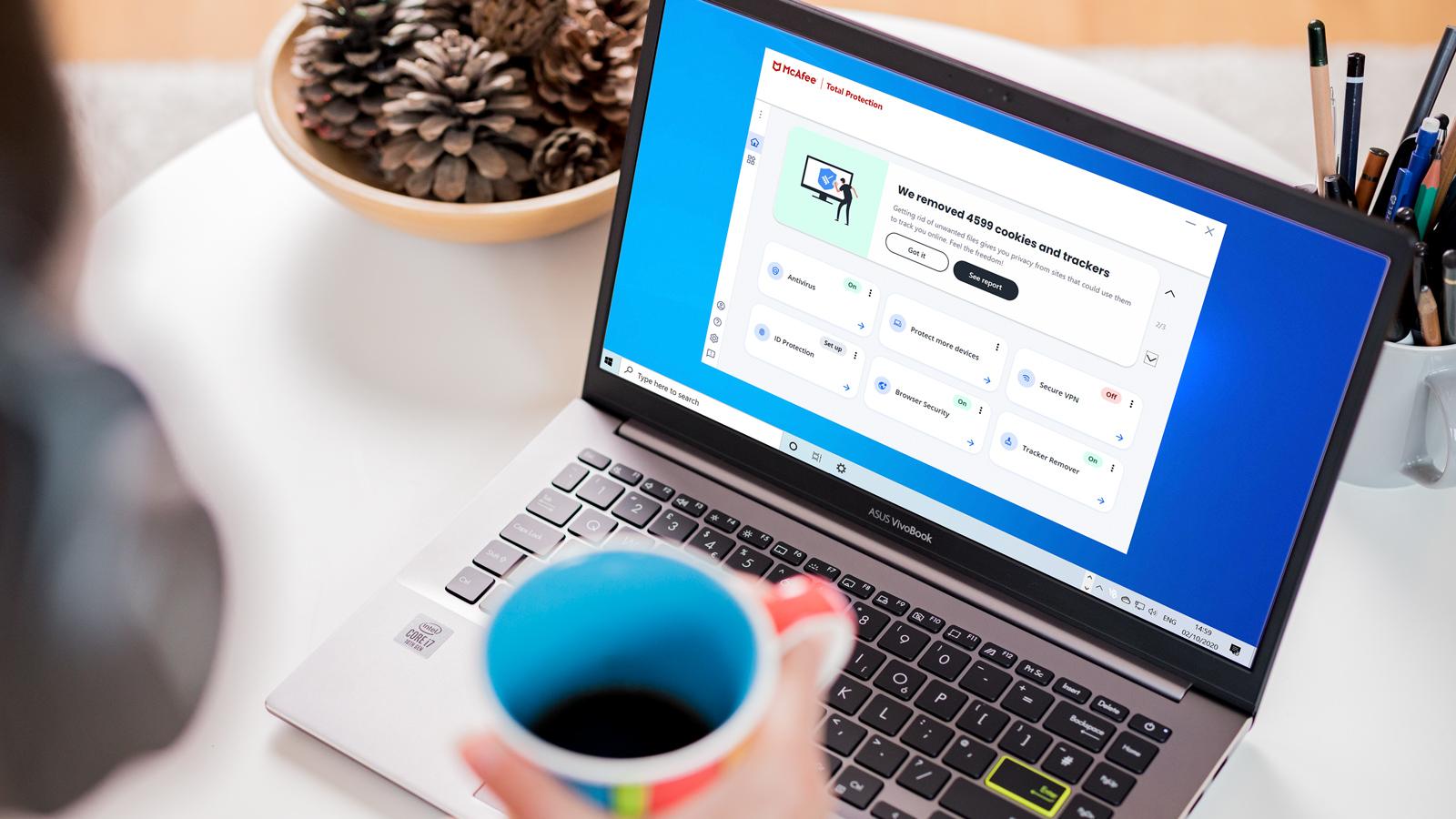 McAfee has recently updated its apps to have a much friendlier interface. It’s great, too, with meaningful messages that tell you what to do – or not to worry – rather than bamboozle you with worrying-sounding technical terms.

Like Norton, the antivirus side of McAfee is ace. It scores highly in tests from the independent malware-testing labs. And also like Norton, it bundles extras including a password manager and – relatively new for UK users (but old news for those in the US) – an ID protection service.

McAfee bought well-known VPN service TunnelBear a few years back, so it’s unfair to say that it’s simply using another VPN’s service branded as McAfee, though you won’t see any mentions of TunnelBear in Total Protection.

Unfortunately, McAfee does still fall down on its VPN offering because it doesn’t reliably unblock streaming services. McAfee says it’s for security, not entertainment, so it’s suited to those who only need the privacy side of a VPN. And for that, it offers unlimited data, a choice of 50 countries and – on Android – the ability to choose which apps use the VPN and which don’t.

It’s disappointing that there’s no kill switch in any of its apps, so there’s a risk your data and real IP address could be exposed if the VPN connection ever stops.

This is why McAfee doesn’t place any higher on this list.

How to choose a good VPN + antivirus bundle

If you’re going to get antivirus and VPN together, both need to perform well. But how do you choose the best one?

Here are some features to look out for: