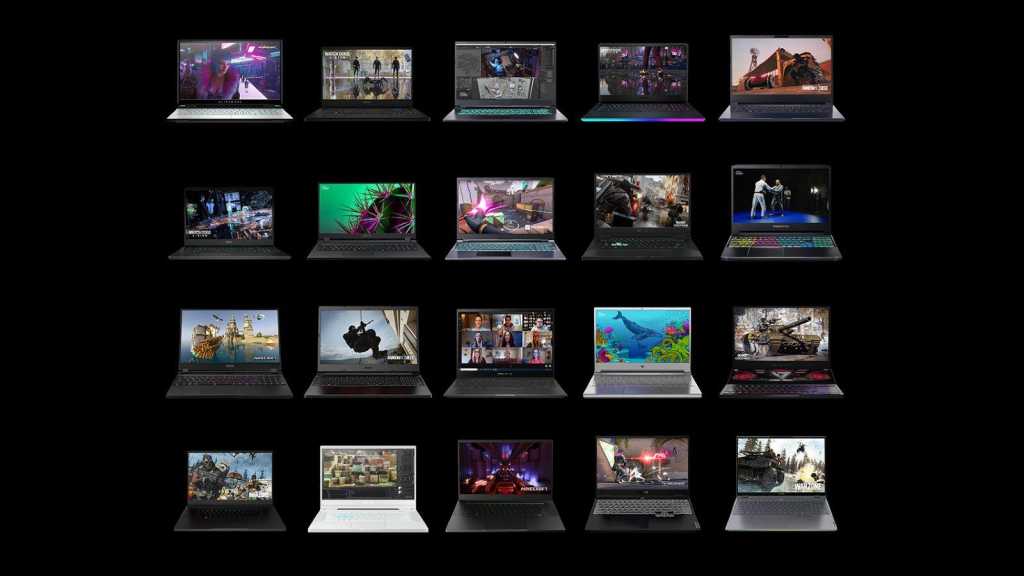 First, Intel announced an expanded range of Tiger Lake-H Series processors, aiming to deliver the high-end gaming we hadn’t seen from its 11th-gen CPUs until now. These new chips sit at the top of Intel’s Tiger Lake lineup, ahead of 12th-gen Alder Lake‘s arrival later in 2021.

Then came Nvidia, the leading manufacturer of discrete graphics cards worldwide. The US company’s new RTX 3050 and 3050 Ti GPUs are the most affordable it’s ever made for laptops, aiming to be included on devices starting at just US$799 (approx. £560/US$660). Alongside the 3060, 3070 and flagship 3080, there are now more discrete GPU options for laptops than ever before.

These two launches triggered a wave of new announcements from gaming laptop manufacturers, eager to be among the first to include these new CPUs and GPUs in their hardware. A total of nine new companies have already launched new devices, with plenty more expected in the near future.

Without further ado, here are all the laptops confirmed to ship with both the Tiger Lake H-Series and RTX 30 series built in.

It makes sense to start with Samsung, given that the Korean company unveiled the new Galaxy Book Odyssey almost two weeks before either Intel or Nvidia had made any official announcements.

The device will only be available in ‘Mystic Black’ when it comes to market in late summer. International availability is yet to be revealed.

The high-end Predator Triton (pictured) might come with a RTX 3080 GPU, but Acer’s other new laptops both have an option for RTX 3050 graphics on entry-level models.

A more affordable option comes in the form of the Nitro 5. There are still two models here, but you’re choosing between a 15.6in and 17.3in display – both have a 165Hz refresh rate. Interestingly, the larger device works out cheaper.

Lenovo has launched three new laptops powered by the Tiger Lake-H series, although only the Legion 5i is designed for entry-level gamers.

Dell has announced a steady stream of new products in recent months, with three of the latest four featuring the option for Nvidia’s new GPUs.

MSI upgraded a whole host of its laptops to Tiger Lake-H, but we’re focusing on its range for creatives here.

The Creator M16 retains the latter, but only features Nvidia’s new RTX 3050 Ti and Core-H i7 instead. In addition to the increased display size, the Creator 17 has options for a Core i9 and RTX 3080, as well as Mini LED display.

Asus’ gaming-focused ROG range has made a name for itself in recent years, so it’s no surprise to devices powered the new components.

The focus of this latest launch was the premium Zephyrus line, with both the Zephyrus M16 and S17 being announced. The former pairs Intel H-Series chips with Nvidia GPUs up to the RTX 3070. They help power a 16in QHD display with 16:10 aspect ratio, something that’s very rare on gaming laptops.

The high-end Zephyrus S17 tops out at a Core i9-11900H and RTX 3080, among the highest specs you can get on any laptop. There’s also 16GB of vRAM, although Asus didn’t reveal full details on this device.

HP has announced three new entries in its ZBook range, but only one comes with the latest Intel and Nvidia components.

The Omen 17 refresh is only available with the latter, and it’s the only one with the option for flagship RTX 3080 graphics. You’re limited to the RTX 3070 on the Omen 16, but that should be plenty of power for most people.

Razer’s updated laptops might be limited to the Blade 15 (pictured) for now, but there’s plenty to talk about here. The company claims the updated PC is the thinnest 15in gaming laptop with RTX graphics, coming in at just 15.8mm.

The top- spec model is slightly thicker, but does get you the high-end RTX 3080 and Core i9-11900H on the most expensive configurations. It’s also where you’ll find a 4K OLED display, although it is limited to 60Hz.

Gigabyte has announced a huge range of new gaming laptops across its Aero and Aorus lines, but the new devices all have plenty in common.

Most of the device have either a 15in or 17in display, with resolutions up to 4K and refresh rates up to 360Hz. Not all have OLED screens, but they all do all have a wide range of ports – think full-size HDMI, Mini DisplayPort and many more.

You might not have heard of XMG, but the German company makes some of the most powerful gaming hardware around.

The Neo 15 (pictured) and Neo 17 are the first of its lineup to get the new CPUs and GPUs, with both offering an Intel Core i7-1800H processor and RTX graphics up to the flagship 3080.

Other key features include up to 64GB of DDR4 RAM, Thunderbolt 4 support and a 93Wh battery.

The pricing listed above may vary due to the global chip shortage and resultant volatility of component markets. XMG says it will provide exact pricing when pre-orders begin.

We’ll update this article once new Tiger Lake-H and RTX 30-powered laptops are announced. In the meantime, check out our best laptop and best gaming laptop charts to see what they’ll be up against.