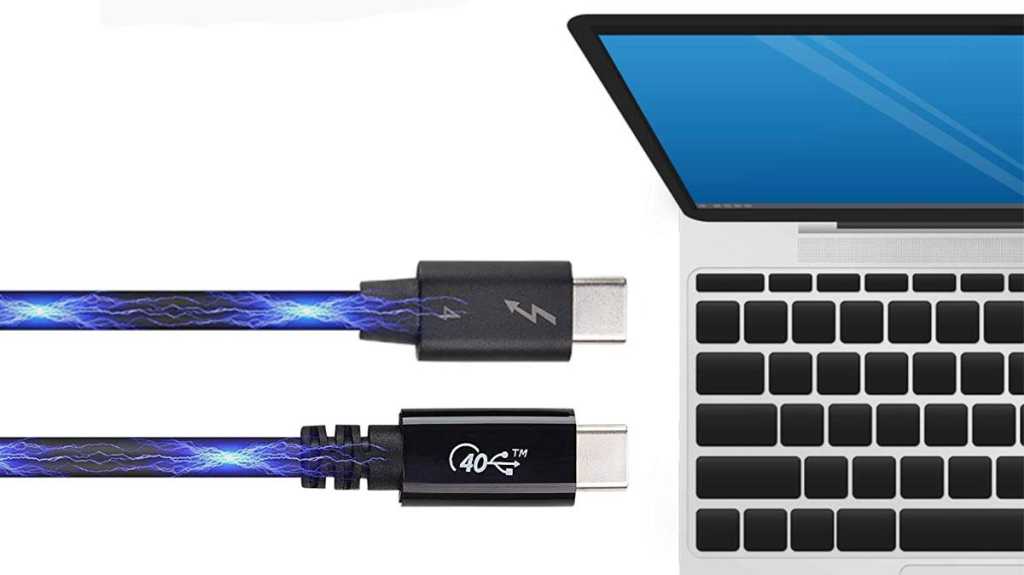 With the arrival of Thunderbolt 4, choosing the right cable for USB-C and Thunderbolt computers and devices has become a lot easier.

The short answer, which I’ll explain here, is that if you’re looking for absolutely the best cable to buy for USB-C, Thunderbolt 3 or Thunderbolt 4, you should aim for an Intel-certified Thunderbolt 4 cable. The same goes for USB-C and USB4.

If someone needs to buy a Thunderbolt 3 cable right now they might as well buy a universal Thunderbolt 4 cable since it is backwards compatible with everything, and they have the benefit of future-proofing their cable.

USB-C and Thunderbolt cables can be either “Passive” or “Active”.

An active cable includes small electronic circuits (called retimers) that boost the intensity of the data carried by the cable, which can stop signal degradation due to the length of the cable. This is why they cost more than simpler passive cables that merely carry data that’s transferred through them but at an ever slower rate the longer the distance.

Data can only travel so far before the integrity of the signal starts to degrade – and the faster the data is running, the faster that degradation occurs.

USB-IF, the official USB Implementers Forum, dictates that passive USB 3.2 Gen 1 (5Gbps) cables should be at most 2 metres, while USB 3.2 Gen 2 (10Gbps) cables can reach only up to 1 metre if it is to keep transferring data at its maximum speed. However, an active USB-C 3.2 Gen 2 cable can be up to 3m in length.

Thunderbolt 4 is the latest version of Intel’s Thunderbolt line. It is backwards compatible with Thunderbolt 3 and USB-C, and has a range of benefits.

All certified Thunderbolt 4 cables work with everything, including USB4, USB 3.2, USB 3.1, and even USB 2.0 – no matter what their length.

Thunderbolt 4 allows for up to 40Gbps data transfer, 100W power delivery (PD) and laptop charging. This was true of Thunderbolt 3, but some Windows PC and laptops used cut-down versions. To be officially certified as Thunderbolt 4 by Intel, all manufacturers have to supply the top specifications TB4 offers.

That’s why we recommend Thunderbolt 4 cables even if you don’t yet own a TB4 computer.

TB4 can also support high-resolution displays up to 8K (7,680-x-4,320) or any USB-C monitor. Buying a USB-C display means you can use a Thunderbolt 4 cable that’s much thinner than a DisplayPort or HDMI cable. It can also be used with many devices other than displays, unlike video cables.

Previously, 2m cables could not be used with USB-C monitors – a limitation rectified by Thunderbolt 4.

In comparison, even 3m Thunderbolt 4 cables support all versions of USB, so buying Thunderbolt 4 will future-proof your cable purchase as well as offer backwards compatibility.

With a TB4 cable, you gain the versatility to connect USB-C devices to Thunderbolt ports.

While a Thunderbolt 4 cable can be passive even at 2m, some are active, and we have stated this in the reviews below where appropriate.

You can attach a powerful wall charger up to 100W, but note that Thunderbolt and USB-C charging functionality is dependent on your host computer’s charging capabilities. Some Windows PC manufacturers limit charging on their ports. Either way, a TB4 cable is capable of the maximum. 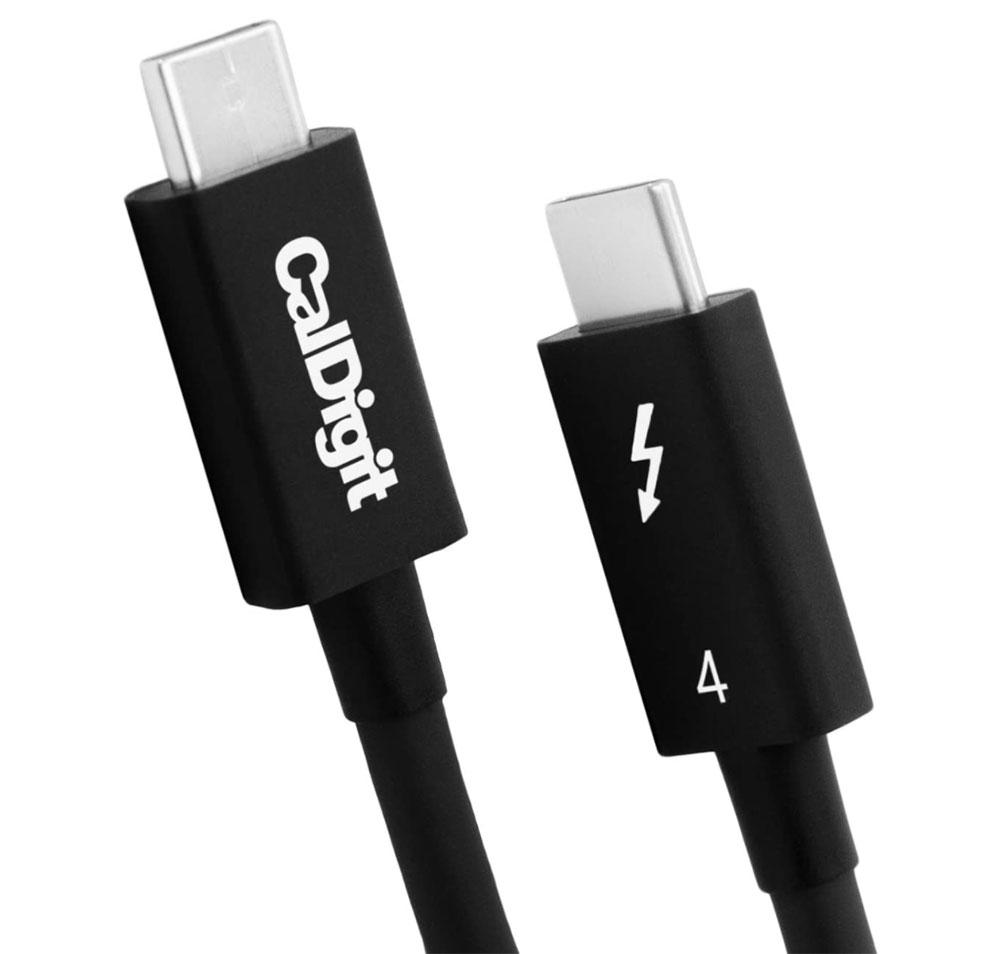 Caldigit’s shortest and most affordable Thunderbolt 4 / USB4 cable measures 0.8m, which is about 2.6 feet.

It is Intel certified, and of a quality you can expect from one of the leading Thunderbolt dock, hub and accessory manufacturers, built with premium materials to maintain consistent performance and reduce heat.

It includes E-Marker chips at either end of the cable, which communicate with attached devices to provide the correct amount of power in order to prevent damage to your devices caused by an excess of power.

Caldigit was one of the first to market with a certified Thunderbolt 4 cable, and so its shorter cables started out at 0.8m.

Later, it released its 1m cable, which operates just like the sub-metre cable but is a little longer! 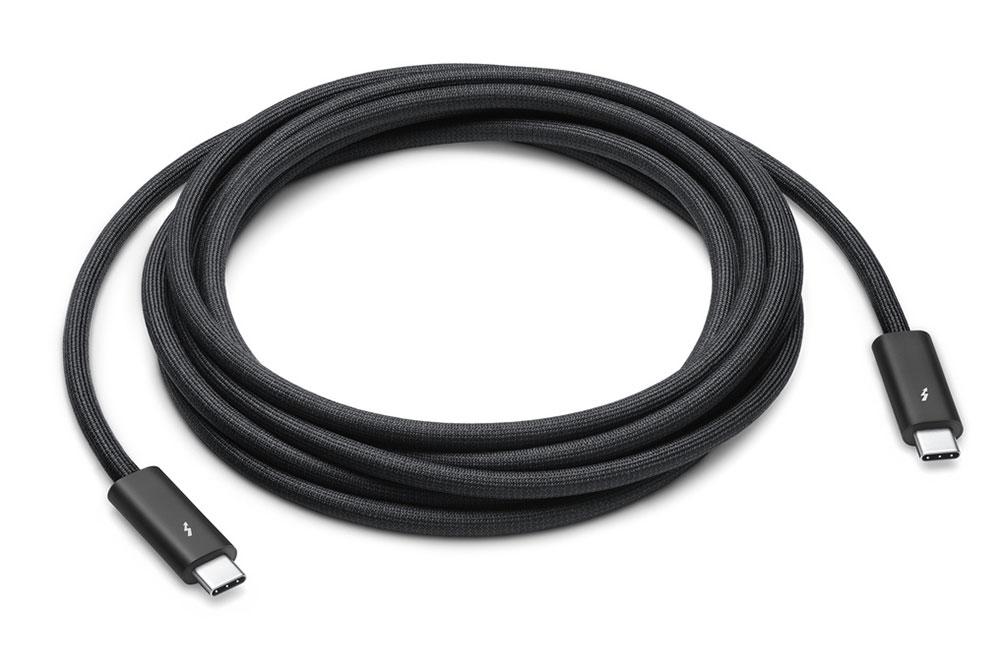 At 3m (nearly 10ft) in length, Apple sells the longest Thunderbolt 4 cable you can get. As such you will pay a premium but if you need the longest cable, this is the only show in town right now.

It’s nicely braided and promises not to tangle when coiled.

Who needs a 3m Thunderbolt cable? Most computers are within a metre or two of the docking station, screen or other connected devices so it’s probably aimed at a professional production setting where an external device, such as shared storage, isn’t close by, 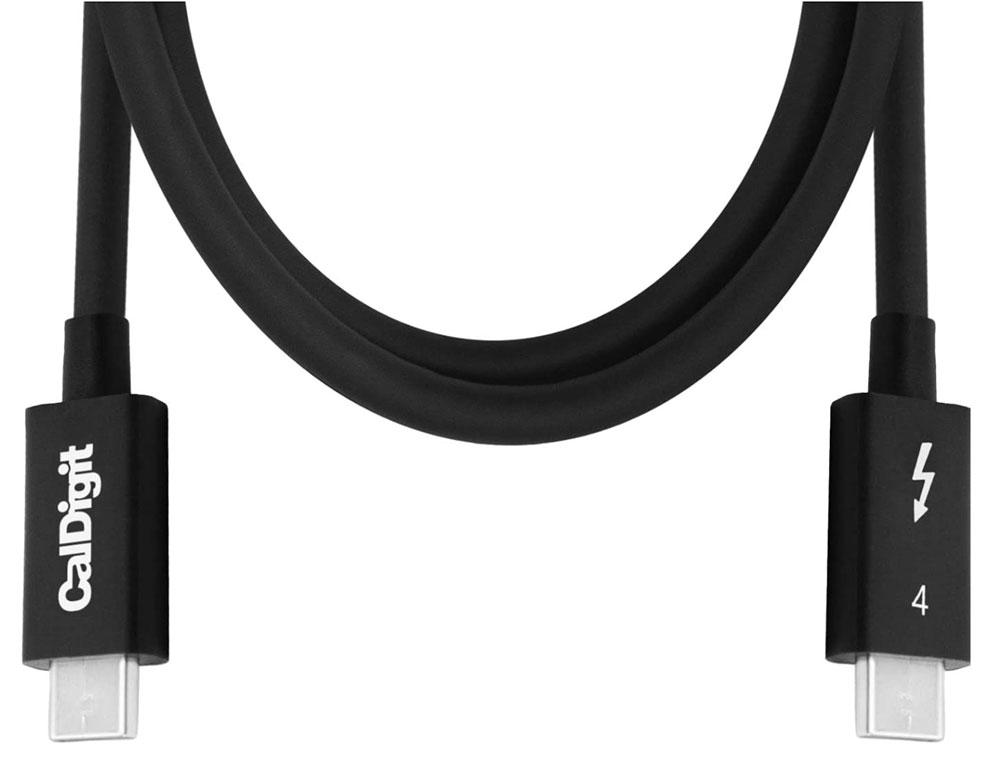 If you need a long Thunderbolt 4 or USB4 cable, look for a 2m length.

Thanks to the magic of Thunderbolt 4, such a long cable doesn’t need to be “active” to keep its full data load at this length, but this cable does boast boosters to keep the signal strong from one end to the other.

Like its 0.8m T4/USB4 cable, the 2m cable is backwards compatible, features E-Marker technology and has a two-year warranty. 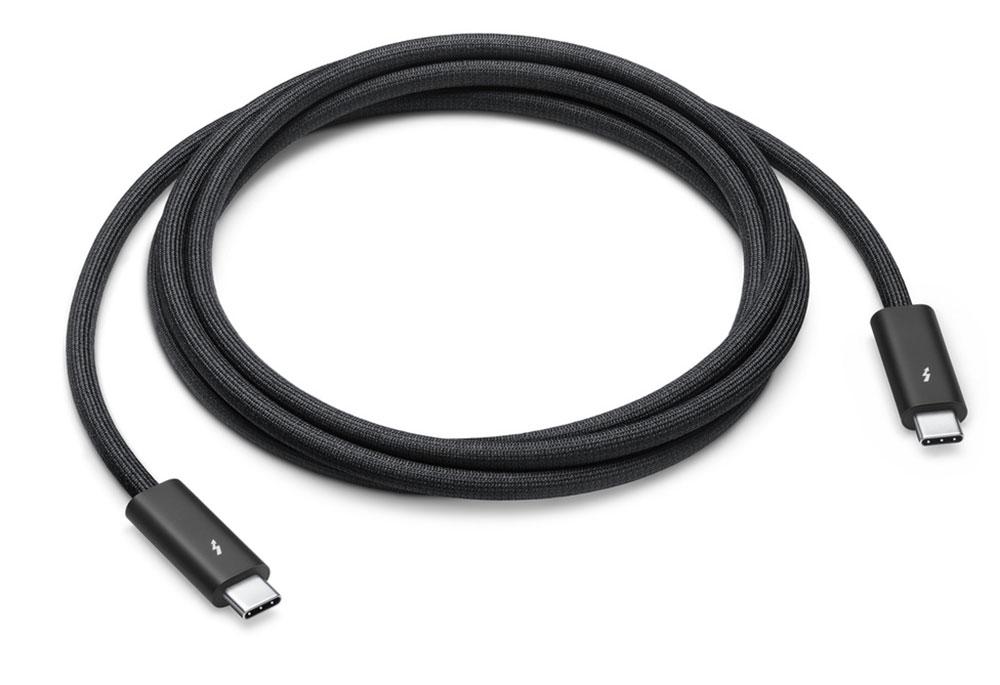 Apple’s Thunderbolt 4 Pro cable is braided in a design that it claims will coils without tangling, which is a joy with any cable.

It’s more expensive than most, but that’s Apple for you. You can buy 2m cables for a lot less from other manufacturers. 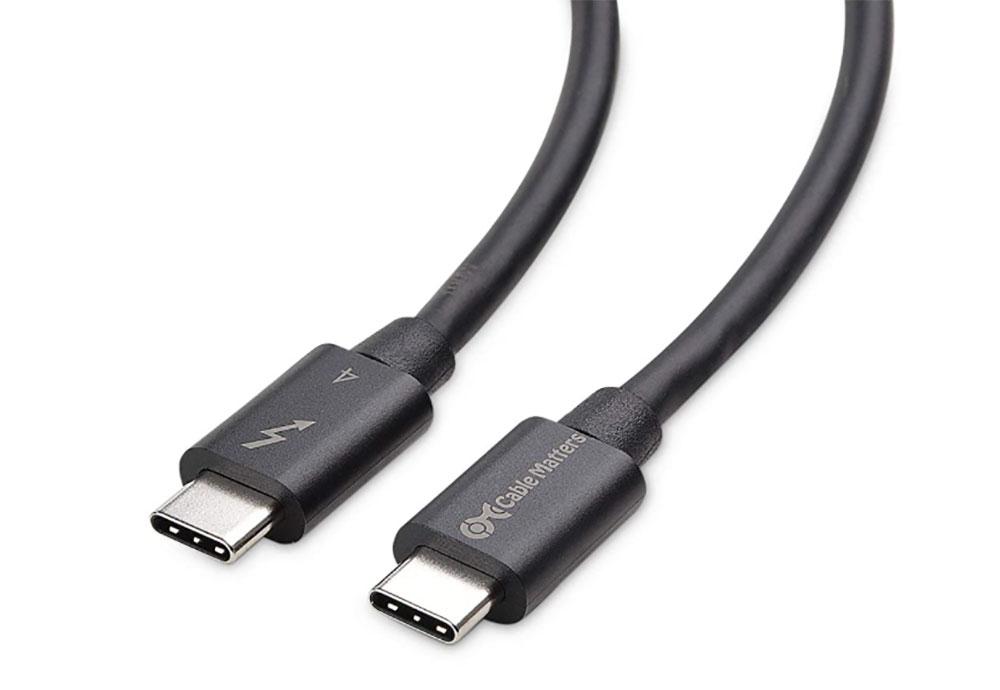 Cable Matters, as its name suggests, is something of a specialist in cables, and it offers a 0.8m Thunderbolt 4 / USB4 cable that is Intel certified, backwards compatible, and capable of all the advantages of the new T4 standard.

0.8m length is probably fine to connect your laptop or PC to a nearby docking station, but it might be too short to connect to that second or third display.

Cable Matters sells an Intel-certified 2m Thunderbolt 4 cable that is also compatible with USB4. It’s an Active cable so has a chipset that boosts the data signal along such a long distance.

2m should be enough if you need to link to a device, such as a monitor, that is some distance from your laptop or docking station. 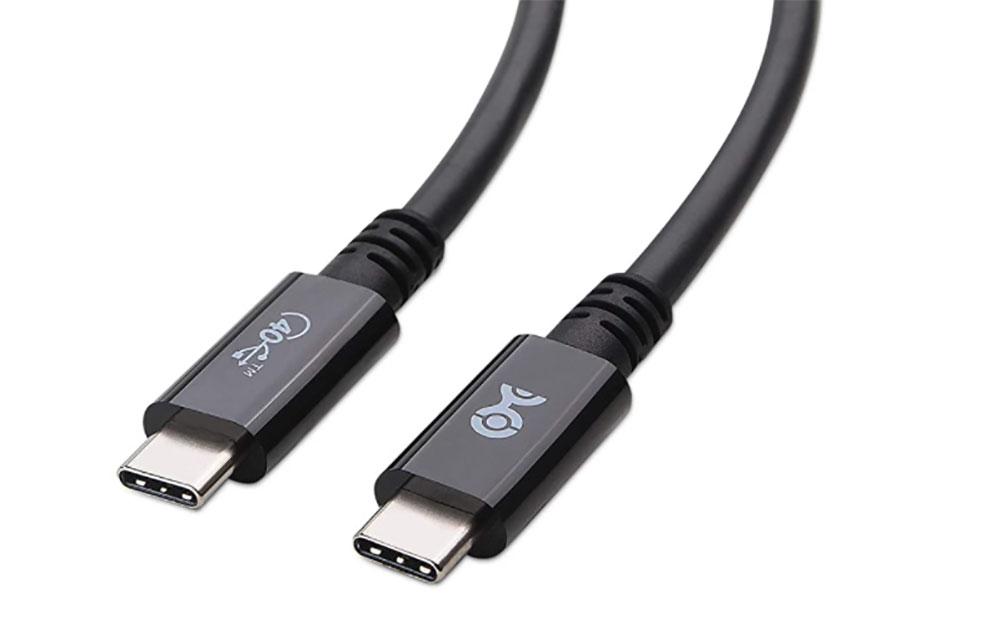 This premium cable is certified to work with USB4 at full 40Gbps bandwidth. 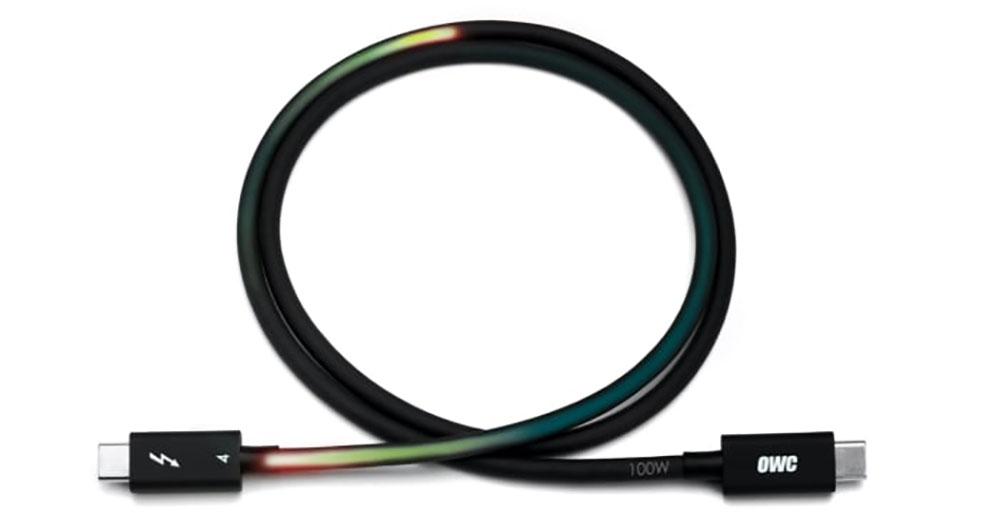 Its Thunderbolt 4 and USB4 cable is universal and certified by Intel, but available from 0.7 metres in length. There’s also a 1m cable available. 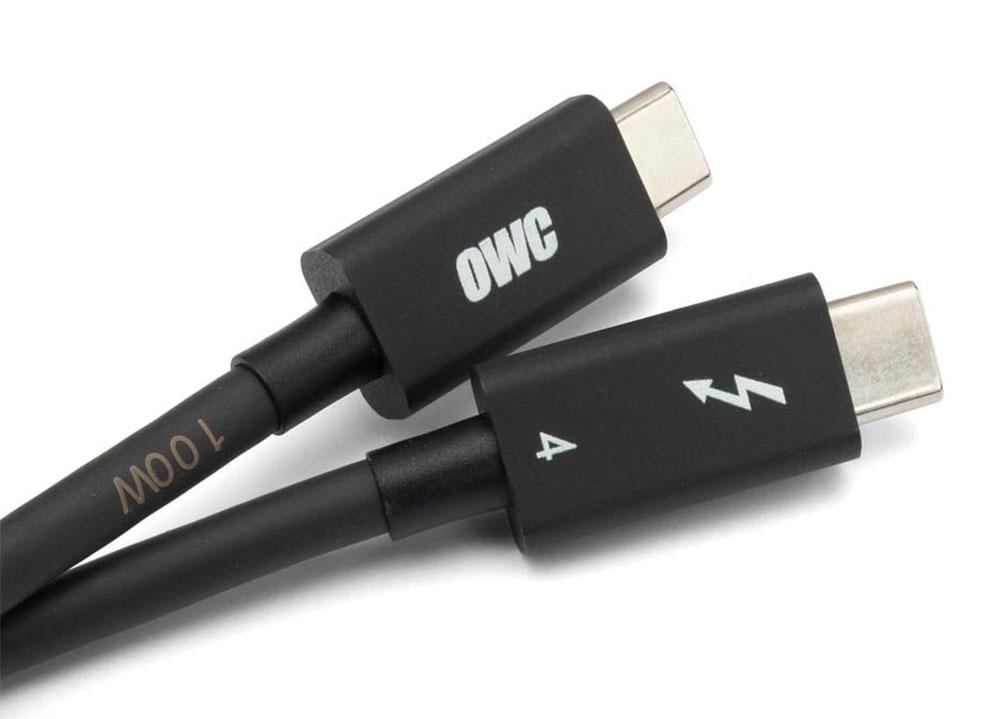 This OWC Thunderbolt 4 cable is 2m long, works with USB4 and is backwards compatible with Thunderbolt 3 and USB-C.

Its three-year guarantee should give you confidence in its longevity. 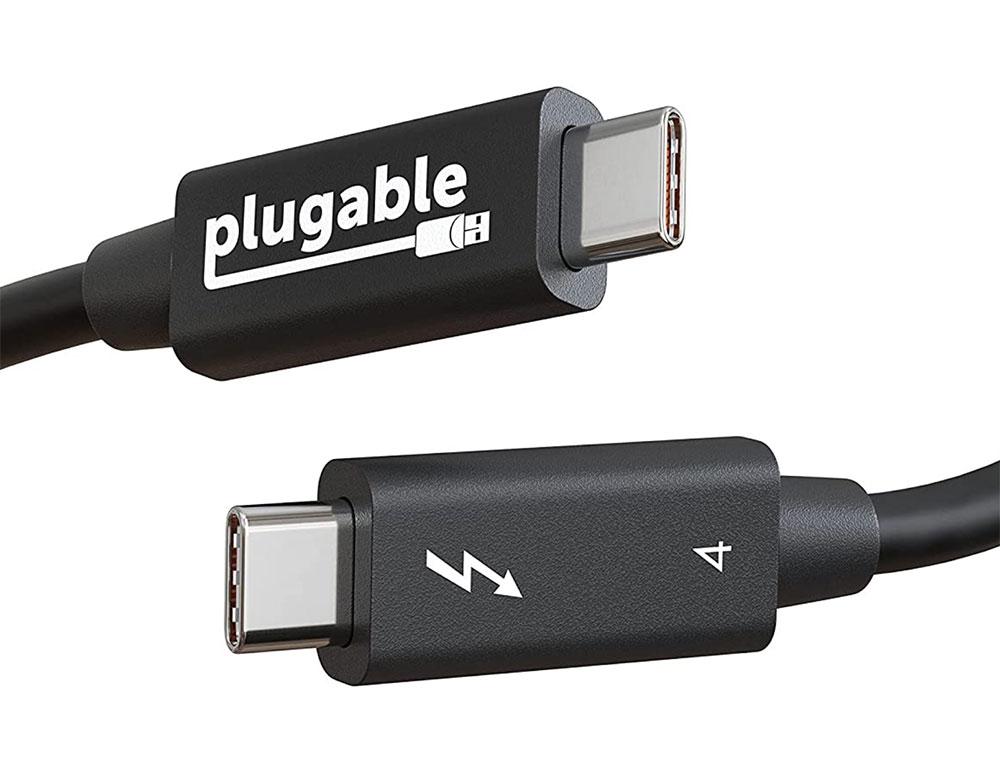 It comes with a two-year warranty.

Just like its half-shorter sibling, the 2m (6.4ft) Plugable Thunderbolt 4 and USB4 cable is fully certified, and long enough to stretch the full length of your desk.

It’s an active cable, meaning the data signal is boosted to ensure it doesn’t degrade over the 2m length. 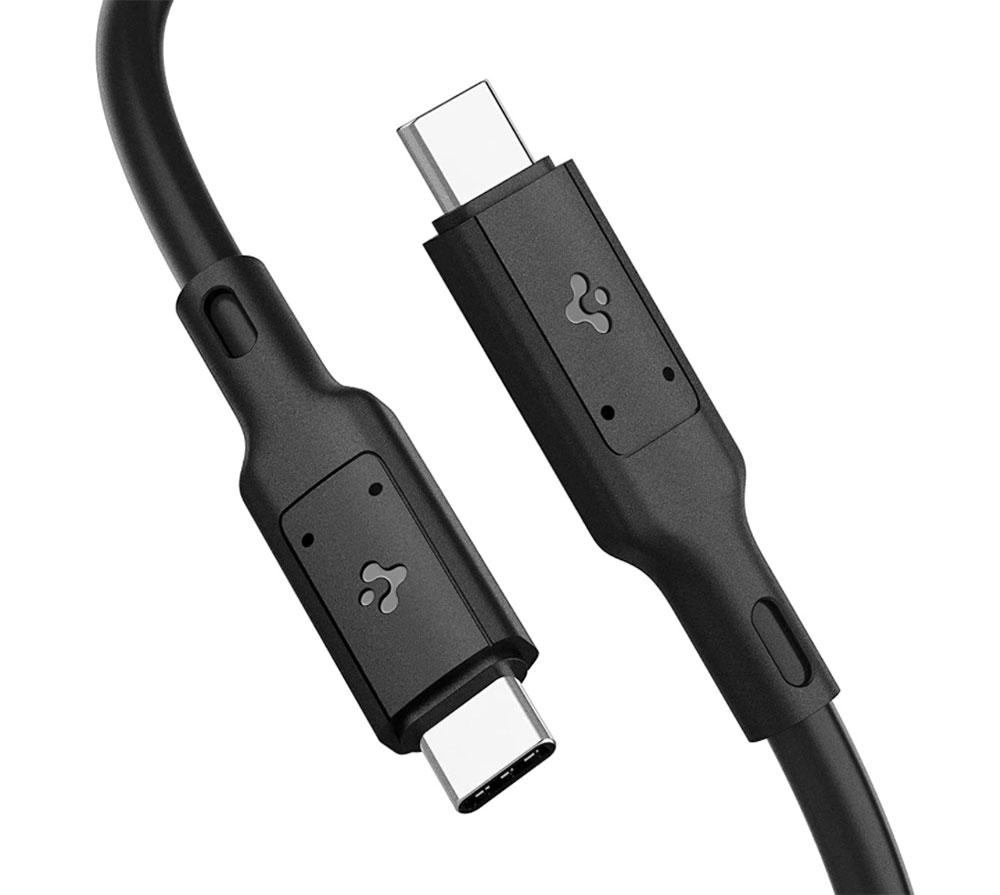 Spigen makes decent cables and has its own 0.8m USB4 and Thunderbolt 4 cable in the mandatory black, although oddly without the 4 icon branding.

The company claims that its Durabend Technology means that the cable has a 10,000+ “Bend Lifespan”. 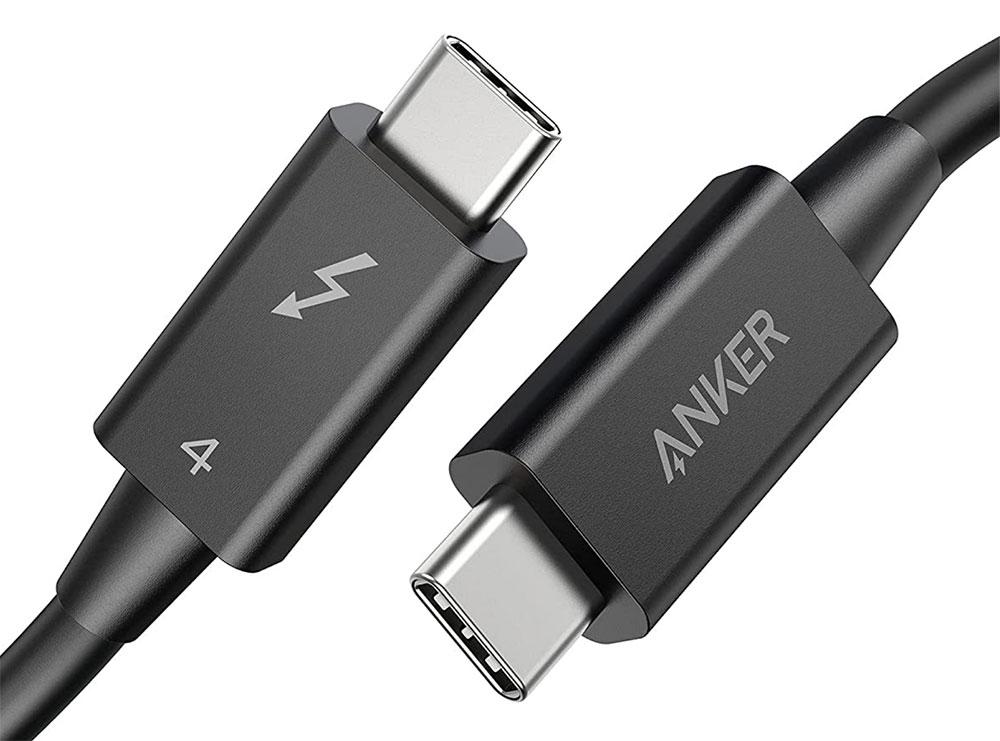 Anker’s Thunderbolt 4 cable is a little shorter than most at 0.7m (2.3ft), but it’s fully Intel certified, and might attract users who don’t need a cable any longer.

USB4 takes over from the often confusing USB 3.0 to 3.2, offering either 20Gbps or 40Gbps data speeds. It uses the same rounded, reversible Type-C connector as USB-C, Thunderbolt 3 and 4.

USB4 is more efficient than older USB variants at sharing between data and display protocols as it can dynamically monitor bandwidth requirements for connected displays and save the remaining bandwidth for data transfer. Older USB simply split the bandwidth in two for display and data.

USB4 can support Power Delivery up to 100W.

A certified USB4 cable will feature the USB logo plus either the number 20 or 40 depending on the speed (20Gbps or 40Gbps) it is rated at.

While a Thunderbolt 4 cable will work with older Thunderbolt 3 and USB-C devices, new Thunderbolt 4 docking stations and hubs are available to take advantage of the ability to include multiple T4 ports.

Read our tests and reviews of the best Thunderbolt 4 and USB4 hubs and docks.