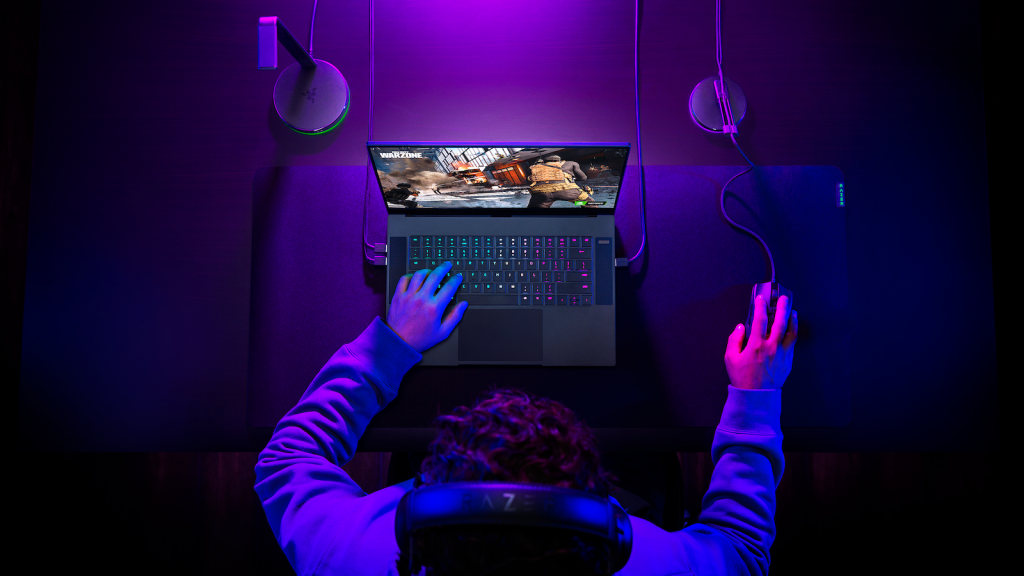 Nvidia took to the virtual stage at CES 2021 to reveal not only the entry-level RTX 3060 for desktop PCs, but an entire range of Ampere-based laptop GPUs too.

And just like how Nvidia offered a huge jump in performance with the desktop RTX 30 Series range, the headline is that an entry-level RTX 3060-based laptop is more powerful than an RTX 2080 Super-enabled last-gen laptop, even besting the performance of the PS5 by a whopping 30%. With a whopping 12GB of GDDR6 memory on offer, we’re not surprised.

That performance, according to Nvidia, should provide gamers with a solid 90fps gaming experience when running at Full HD resolution with Ultra graphics settings enabled. Thanks to the jump in performance, expect to see gaming laptops come with increased refresh rates in 2021 – some up to an incredible 360Hz – which should make gameplay buttery smooth.

You’ve also got the AI and ray-tracing capabilities of the new RTX range to take advantage of, including Nvidia’s resizable BAR technology that allows the CPU to access the entire GPU memory at once and Nvidia Reflex, reducing input latency from keyboards, mice and controllers in competitive shooters.

The best part is that RTX 3060-enabled laptops start at as little as £999/$999, offering great performance without breaking the bank – relatively speaking, anyway.

With 70 new laptops from OEMs being released with RTX 30 Series GPUs, it can be hard to work out which come with the cheaper RTX 3060. That’s where we at Tech Advisor come in; we’ve spoken to OEMs and scoured the web to find every RTX 3060 laptop available right now as well as those coming later this year, and we’ve listed them right here.

Though the Razer Blade Pro 17 remains physically unchanged from the 2020 variant, that’s not a big deal – the CNC-machined aluminium body, large trackpad and great keyboard on offer from the Blade Pro 17 offers a premium mobile experience, and besides, it remains one of the smallest 17in RTX-enabled laptops available right now.

The Razer Blade Pro 17 offers a range of high-end display options, including a 4K UHD 120Hz touch display or 360Hz FHD display, and even with the entry-level RTX 3060 Max-Q configuration you’ll get a high-quality QHD@165Hz display ideal for both work and play.

That’s paired with Intel’s 10th-gen Core i7 10875H and 16GB of DDR4 RAM, a suite of ports and a per-key backlit keyboard. There’s 512GB of SSD storage by default, but with a spare M.2 slot, you can upgrade it yourself at a later date.

It’s a premium device, make no mistake, coming in at £2199.99/$2299.99 for the entry-level model, but for creatives and gamers that can make the most of the tech, it’s a great option. The RTX 3060 configuration will be available for buy from Razer from early February, with availability at other retailers due soon.

Ironically, the GF65 Thin is actually almost 6mm thicker than the MSI Stealth 15M also revealed at CES, measuring in at 21.7mm, but hey, let’s not question the branding of tech companies – it’s a rabbit hole to say the least. Regardless, at only 1.86kg, it is a lightweight entry that doesn’t compromise on overall performance, featuring a combination of the RTX 3060 Max-Q, Intel’s 10th-gen i7 10750H, 16GB of DDR4 RAM and a whopping 1TB M.2 NVMe SSD to store your games on.

That’s a decent setup that can take full advantage of the 144Hz refresh rate of the 15.6in Full HD IPS display, or if you’ve got an even better external monitor, you can make use of the full-size HDMI port on offer. There are also three USB-A 3.1 ports, a USB-C 3.1 port and a charging port, but you won’t find an SD card reader like other options in the roundup.

The power of the RTX 3060 means that OEMs have the option of increasing the refresh rate of gaming laptop displays, and Gigabyte’s Aorus G5 takes full advantage of that, packing a 15.6in Full HD IPS display that runs at a buttery-smooth 240Hz refresh rate, ideal for quick response times in shooters like Call of Duty Warzone. Alongside the RTX 3060 you’ll find Intel’s older 10th-gen Core i7-10870H, 16GB of DDR4 RAM and a 512GB M.2 NVMe SSD, which should offer great 1080p gameplay for on-the-go gamers.

Gigabyte has things covered in the cooling department too, with the G5 sporting two 5V fans and four internal heat pipes to help dissipate heat generated from your GPU and CPU during intense gaming sessions. That hot air is jetted from three separate exhaust vents, so while your room might get a little hot, the laptop shouldn’t.

Though you get a fully backlit RGB keyboard, the general look of the G5 means it wouldn’t look out of place in an office or at university, sporting a rather minimalistic matte black outer shell compared to other glimmering RGB options mentioned in our roundup. You’ll get a bunch of ports, including USB-C 3.2, HDMI 2.0, MiniDP and even an SD card reader, and WiFi 6 comes as standard too.

Much like the Razer Blade Pro, Dell’s gamer-focused Alienware M15 and M17 haven’t changed much physically, but considering the R4 redesign was so significant – and let’s be honest, so good-looking – that we’ll let that slide this year. Besides, added power under the hood brings big improvements to the high-end 2021 laptop range.

The star of the show is of course the RTX 30 Series GPUs, with a full-powered RTX 3060 configuration available on both the 15in and 17in models. That’s backed by Intel’s 10th-gen i7 or i9 depending on your configuration, and there’s also up to 32GB of DDR4 RAM available too. Throw in up to 4TB of SSD storage, a 360Hz display option on the 17in variant and a suite of ports including a HDMI 2.1 port and you’ve got one of the best gaming laptops available in 2021.

Dell has yet to announce specifics of the RTX 3060 build, but unlike the rest of the range which is now available to buy, the RTX 3060 models aren’t due to be released until 9 March 2021. We do know that the M15 will start at a rather premium $2,149 though, with UK pricing yet to be confirmed.

The combination means Asus could bump up the refresh rate, offering 165Hz at a detailed WQHD resolution. Asus promises a low-latency 3ms response time that when coupled with Nvidia’s Reflex technology should negate any noticeable lag when playing fast-paced games.

The entry-level Asus TUF Gaming Dash F15 offers two variants with the RTX 3060, paired with an 11th-gen Intel chipset. The Dash F15 brings premium components down to a more affordable price tag – after all, TUF is Asus’ more affordable range of gaming laptops.

The premium power on offer meant Asus could bundle a high refresh rate display, offering gamers a 1080p monitor with 144Hz refresh rate. You shouldn’t worry about it breaking either, sporting the same military-grade (MIL-STD-810H) protection as the rest of the TUF range.

Where the Dash F15 shows its budget-focused nature is in the design department; at 19.9mm thick, it’s admittedly thinner than previous TUF laptops, but it’s still thicker than much of the competition. It is lighter than you might expect by looking at it though, coming in at around the 2kg mark.

It’s available to pre-order right now in two configurations – an entry-level model with 8GB of RAM, and a slightly more premium model with 16GB of RAM – with orders shipping on 30 March 2021.

Acer’s Predator Triton 300 SE makes use not only of the powerful Nvidia RTX 3060 Max-Q GPU, but also Intel’s new 5GHz i7-11375H processor to offer upgraded performance in a thin and light form factor. Well, relatively so anyway; it measures in at 17.9mm thick and 1.7kg, but that’s a big improvement on older, chunkier gaming laptops.

You’ll get a 14in FHD 144Hz panel for your money, along with a suite of ports (including Thunderbolt 4, HDMI and USB 3.2 Gen 2 ports) and an RGB-backlit keyboard, but it’s the design that makes it stand out here. Acer largely decided against the typical gamer aesthetic when designing the Triton 300 SE, instead sporting a simplistic all-metal design that wouldn’t look out of place in an office. Business in the front, party in the back and all that.

The Acer Predator Triton 300 SE has a starting price of $1,399.99 (UK pricing yet to be confirmed) and it’ll start shipping in February, but the company hasn’t confirmed what specs you’ll be getting at the 3060-level just yet.

Acer’s fan-favourite Nitro 5 has also had an upgrade in 2021, and there are plenty of configurations to choose from. Among them is the combination of AMD’s Ryzen 7 chipset and Nvidia’s RTX 3060, and depending on the specific configuration, you can max out the display at either FHD@360Hz or QHD@165Hz, and it’s available in 15.6in and 17.3in too. There’s also an option with pairing Intel’s 11th-gen chips, but that maxes out at 144Hz.

While some gaming laptops are nearing ultralight formfactors, that can’t be said of the Nitro 5 at 2.5kg on the 16in model – although that’s down to purposeful design. The extra bulk allows for a powerful audio setup, fully backlit RGB keyboard and other gamer-focused features.

Most importantly, there are two additional NVMe SSD slots and a 2.5in SATA SSD slot to expand storage in future, and it supports up to 32GB of RAM too. It’s not often you find laptops that you can upgrade yourself, so that’s a plus for the Nitro 5.

With the 2021 refresh of the popular Zephyrus G14, Asus introduced Nvidia’s upgraded RTX 3060, offering a jump in graphical performance compared to the older RTX 2060, alongside AMD’s latest Ryzen 5000 Series CPU.

That’s a big improvement to an already capable laptop, but it’s not the only standout feature: the improved performance of the standard RTX 3060 means Asus could introduce a buttery-smooth 1440p@144Hz display to the range, and there are improvements to the fully customisable LED lid too. You’ll also be able to squeeze 10 hours of battery life out of the laptop, and there’s Dolby Atmos support via the quad-speaker setup too.

No word on pricing or release date for the G14 or larger G15 just yet, but that’ll likely be announced soon.

While the RTX 3060 announcement was gamer-themed, let’s not forget about creatives that also need graphical power for graphic design, video editing and more.

For the more creative, Gigabyte is releasing the Aero 17, a 17.3in FHD creator-focused ultralight laptop sporting a GeForce RTX 3060 Max-Q and up to an Intel Core i7 processor – although whether it’s 10th- or 11th-gen is yet to be confirmed, as are the specifics surrounding RAM and memory, but we should find out more at the end of January.

What we do know is that it’ll offer a suite of ports including HDMI 2.1, miniDP and Thunderbolt 3 for image output, along with an SD card reader to quickly transfer images and videos.

It’s worth noting that this is separate from the Aero 17 HDR, which will offer up to an RTX 3080 and an Intel Core i9 powering a 4K HDR display.

It’s worth noting that there is a difference between the RTX 3060 and the RTX 3060 Max-Q, with the latter being less powerful than the standard 3060 in order to fit into slimline laptops, and while Nvidia has traditionally forced OEMs to list whether the GPU is standard or MaxQ within listings, that’s no longer enforced – just encouraged.

It’s a sticky situation as most OEMs aren’t currently specifying whether their laptops sport a standard RTX 3060 or a lightweight RTX 3060 MaxQ, meaning you might be losing out on quite a bit of ray-tracing power without even being aware of it.

We’ve reached out to manufacturers to get clarification on the laptops mentioned above, and we’ll update our laptop listings once we know more.