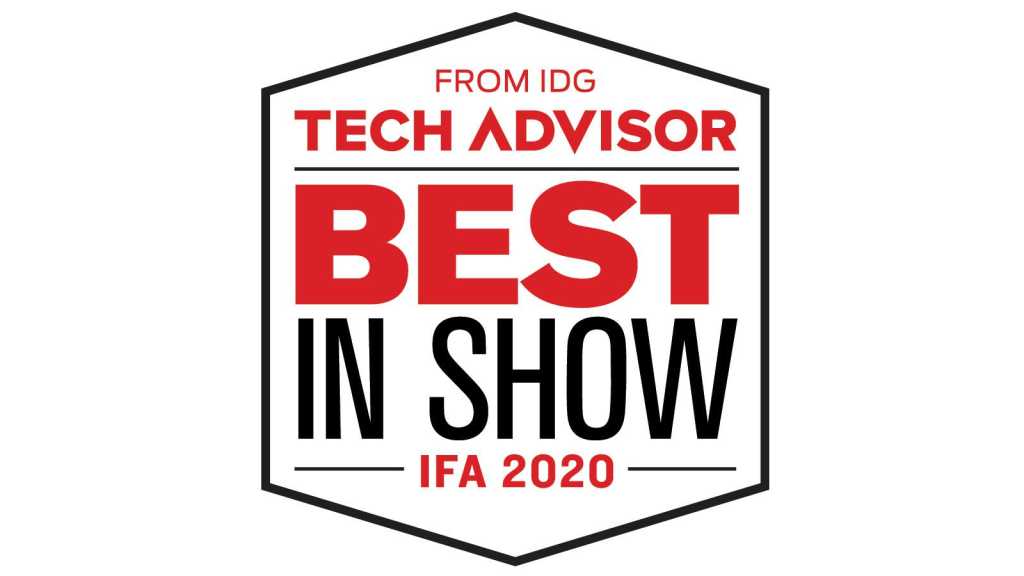 IFA is one of the biggest tech events on the calendar and despite the ongoing global pandemic, the show has still gone ahead in Berlin. Well, sort of anyway.

Before we get any further, we want to make it clear that although IFA was a physical show with people attending in person, the Tech Advisor team was not roaming (getting lost) the Messe halls like we normally would.

For safety reasons, we’ve covered the show from our home offices and so these awards are not based on getting hands-on time with products in the flesh like normal. Instead, we’ve put our heads together and picked out what we’ve seen via the virtual press conferences and the like.

Despite the pandemic, there has been an impressive range of tech at IFA 2020 so without further ado, here’s (in no particular order) what made the cut to win a Best in Show award.

Eye-catching tech doesn’t get much more eye-catching than the Philips OLED+935 and you just know it’s going to look almost as good in real life compared to the press shot.

OLED tech is becoming more affordable and this model comes in a smaller 48in size which is great for anyone with a compact living room. And despite coming in at under £2k, the 935 has a soundbar integrated into the design with 3.1.2 sound courtesy of Bowers & Wilkins.

A new dedicated AI processor promises to give you the best picture, there’s anti-burn detection and the mesmerising 4-sided Ambilight LEDs seal the deal.

Read more about the Philips OLED+935.

The portable Sonos Move speaker was a long time coming and although it’s excellent, not everyone can afford the £399 price tag. Well, that’s where Harman Kardon can help out with the new Citation 200.

Unusual name aside, this is a stylish wireless speaker that you can use at home over Wi-Fi or grab the handle, switch to Bluetooth, and head into the garden, park, beach or wherever.

It’s IPX4 splashproof, has wipe clean blended wool fabric, support for Google Assistant, AirPlay and Chromecast. Plus it features eight hours of battery life, all at £100 cheaper than the Sonos Move.

The Honor MagicBook Pro takes the same approach as previous MagicBooks – slim design, powerful CPU, and consistently competitive pricing – and upgrades the package to a super-sized 16.1in display.

‘Pro’ is a bit of a misnomer, as with no discrete GPU or Thunderbolt support this isn’t really a proper creator laptop, but with one of the fastest laptop CPUs around in the AMD Ryzen 5 4600H, 12-hour battery life, and 65W fast-charging, it ticks a lot of other boxes.

This won’t deliver for gamers or demanding creatives, but if you want a big screen and powerful performance below a grand, there won’t be many better options.

Read our full review of the MagicBook Pro now.

Nvidia’s next-gen RTX 3000 Series graphics cards represent the biggest generational leap ever in Nvidia’s GPU collection, and the results are astounding. The flagship RTX 3080 can render 4K@120fps in Doom Eternal, beating the performance of the last-gen RTX 2080Ti which costs almost double, and it introduces a new dual-fan system that works with your PC chassis to keep the GPU cool.

Tech specs aside, the GPU range looks stunning, and we’re not sure if we’ve ever been able to call a GPU ‘good-looking’ before.

Find out more about the Nvidia GeForce RTX 3080.

The Galaxy Z Fold 2 feels like the foldable Samsung wanted to launch when it introduced the original Galaxy Fold last year. It sports a refined design with tighter dimensions, a more reliable hinge and larger displays on both the outer cover and the inside face.

As well as slimming down the bezels, both displays sport single front-facing cameras with a hole-punch design that makes them far less intrusive to the viewing experience. The cover screen now reaches the edges of the Z Fold 2’s outer face, while the interior 7.6in main screen boasts a 120Hz high refresh rate.

As well as flagship internals, Samsung has also worked to improve the user experience, with Flex Mode lifted from the Galaxy Z Flip adding new functionality when the Z Fold 2 is positioned between 75° and 115°.

With everything Samsung’s learned from its previous foldable, the Samsung Galaxy Z Fold 2 looks to be the most refined foldable smartphone to date.

Samsung has managed to produce a laptop that’s a genuine upgrade over its predecessor, no mean feat in the age of incremental updates.

The Galaxy Book Flex 5G adds Intel’s new 11th-gen processors and, you guessed it, 5G support, to a device that was only released in May, making it a compelling option in the saturated laptop market.

This spec bump is enough to make it the first 5G laptop to be included in Intel’s Evo Platform, a new standard of premium devices that offer a great blend of power and portability.

Samsung had already nailed the fundamentals on the regular Galaxy Book Flex, and the 5G model looks to be taking this to the next level.

Find out more about the Samsung Galaxy Book Flex 5G.

The Cookit has had a highly successful limited release in Germany and Austria but it’s rolling out more widely now.

It’s one in a new generation of smart cooking appliances that can walk you through food preparation. Simply download a recipe via Bosch’s Home Connect app to the appliance itself and follow the instructions on the full-colour screen. For even lower-effort cooking, you can use one of the 24 automatic cooking programmes.

The Cookit is a one-stop-shop cooker, a hybrid appliance that combines a food scale with full food processing capabilities, a cooking pot, roasting, frying and steam function.

There’s no precise information on release dates or pricing but it currently costs €1,266 in Germany.

Find out more about the Bosch Cookit.

It comprises three connected appliances, the H-Scanner, the H-Purifier 700 and the H-Go 700 Extra, which work together via Haier’s new platform, the hOn app.

The H Scanner monitors air quality and settled dust levels. When it detects a level of dust and pollen in the air beyond a certain threshold, it will alert the H-Purifier, which will begin cleaning the air and the H-Go 700, which will start vacuuming the floor.

The price and release date for this system have not yet been announced.

While TCL made a grander appearance at IFA 2019 – launching its first own-brand smartphone line, the company had far fewer products to launch at this year’s event.

Even so, the new TCL 10 TabMax stood out to us as a promising affordable offering that marries affordability with some considered inclusions, like the TCL Stylus, dual stereo speakers and perhaps best of all, the latest WiFi 6 connectivity and optional LTE cellular connectivity.

It’s fair to say that Android tablets worth considering are few and far between and both TCL’s new 10 TabMax and 10 TabMid have the potential to gain a lot of ground in this area.

Although the Huawei Watch fit technically beat the Honor Watch ES to the punch by arriving a few days earlier, only the ES launched at IFA and it’s a promising affordable fitness-centric smartwatch to be sure.

Its rectangular portrait 1.67in OLED display is eye-catching, not just because it sends out some legitimate Apple Watch vibes, but because it’s purpose-built for the ES’ animated workout routines, design to give you a quick ab workout while taking a screen break.

It’s also waterproof up to 5ATM, supports 95 workout modes – with automatic workout detection for six of them – and promises impressive 10-day battery longevity.