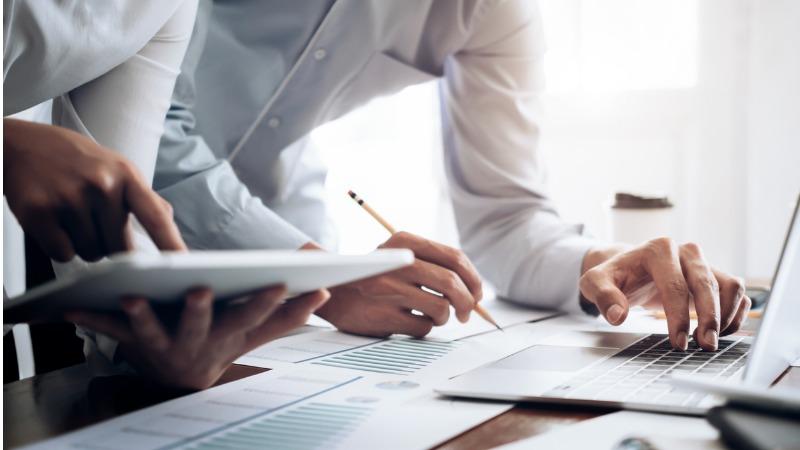 Crowdfunding is a great option when starting out your small business. It can help you to cover several finances and also cover any upcoming costs along the way.

Starting a business is not always easy, so securing guaranteed from different investors is a smart way to get the support that you need without being tied to bank loans. Crowdfunding has been a popular option for many entrepreneurs over the years, and the nature of this route means that the most unique ideas are likely to rise to the top fast.

However, with several crowdfunding websites out there, finding the right one for you could be a challenge. We’ve handpicked some of the best to help you out.

You can also find out some of the UK’s best venture capital firms here for more funding options.

RateSetter is a peer-to-peer lending site offering the public the chance to invest in households and businesses. So far, £2.9 billion has been lent via the site.

If you wanted a personal loan, for example, you would incur interest rates of 3.9% for a loan of £5,000 over one year. The conditions are flexible – you can repay early in part or full without incurring fees, and it’s fast – the money can be in your account within 24 hours.

You can apply easily to get a quote. 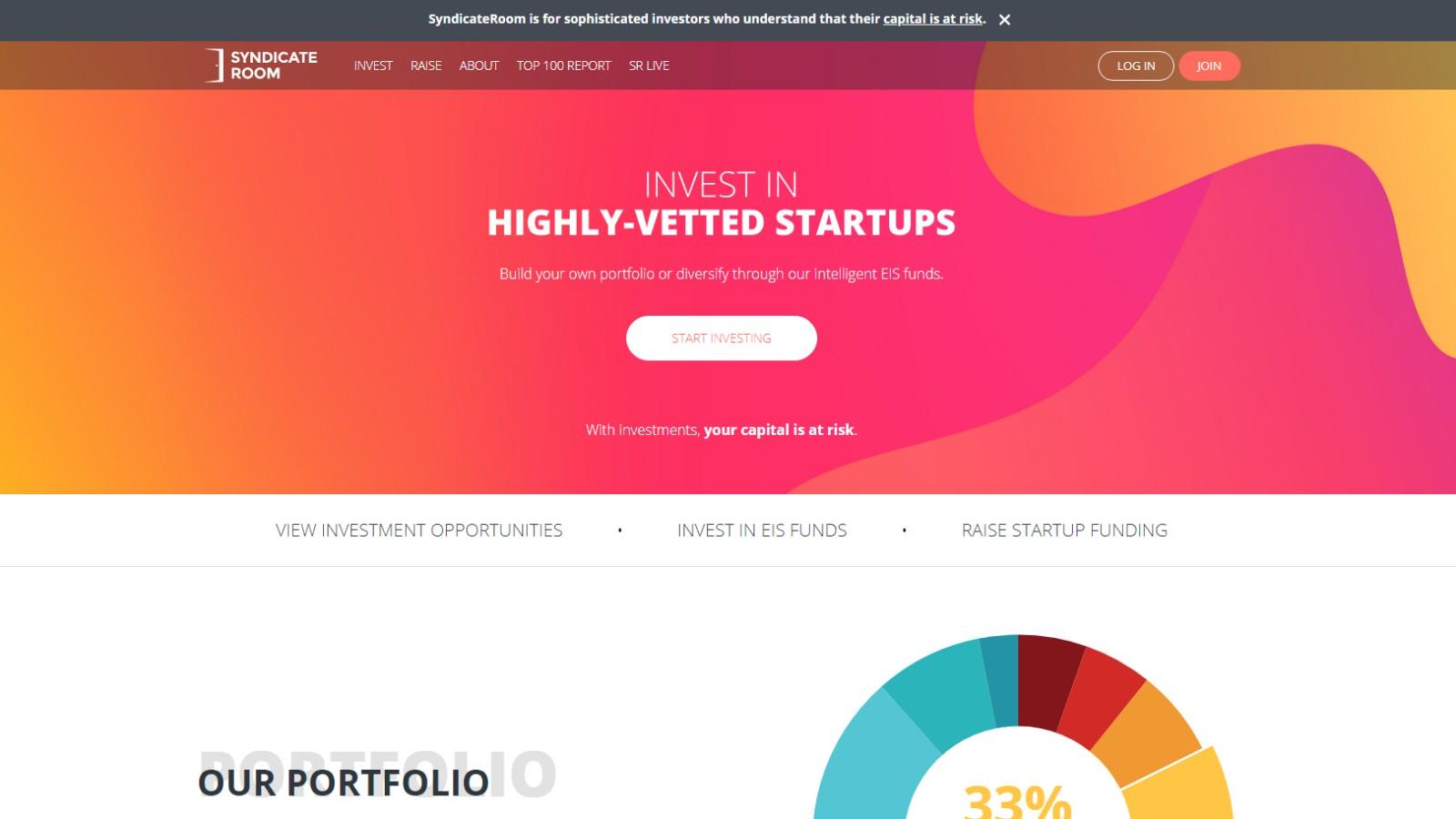 UK crowdfunding platform, SyndicateRoom, aims to connect investors with highly vetted UK startups. This means that your startup will need to fit some strict criteria, but it takes only two minutes to find out whether your startup qualifies.

The site says that most startups raise between £100,000 and £500,000, and claims these figures, which might give you an indication whether this is the right site for you: 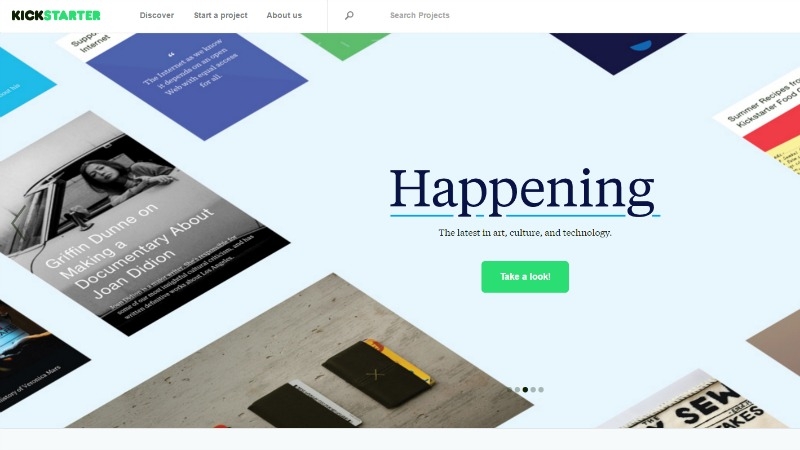 So far, 13.9 million people have pledged more than $3.39 billion via the platform.

You will set a funding goal, and will forfeit any funds raised if it’s not met. If it is, you’ll pay 3 percent of profits to Kickstarter as well as a further 3-5% to the payment processing.

You can set your campaign time between 1-60 days, but the site recommends a period of 30 days in which to raise cash.

While donors can be promised exclusive gifts in return for their contribution, you can’t offer any stakes or ‘shares’ in successful projects. 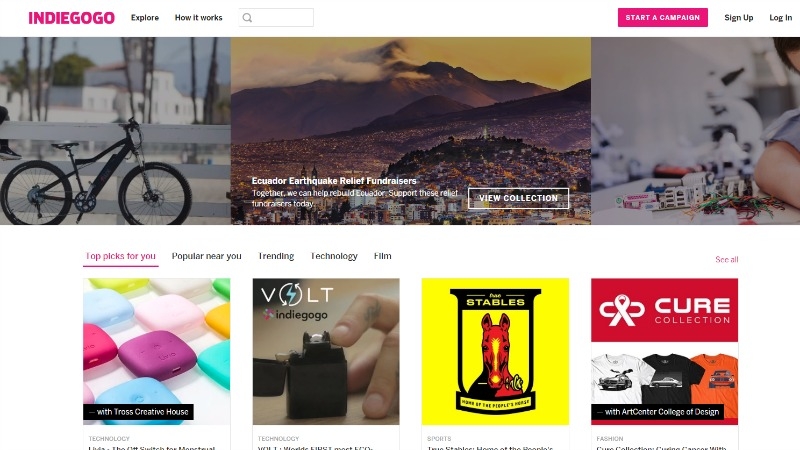 Indiegogo is more squarely targeted at entrepreneurs than Kickstarter, with the website divided into three categories: Tech and Innovation, Creative Projects and Community Projects. The site also boasts a marketplace where you can sell successfully funded products.

On Indiegogo, you can collect your funds even if you don’t reach your target, but the company skims 5 percent off the top of any profits you make as well as additional credit card fees.

Indiegogo has raised over $1 billion since it launched in 2007.

The platform has also partnered with MicroVentures, offering an equity investment option where small businesses are connected with angel investors in either early or late stage funding. Angel investors must be willing to pledge a minimum of $100. Since 2011, there have been 160 investments and over $100 million raised on the site. 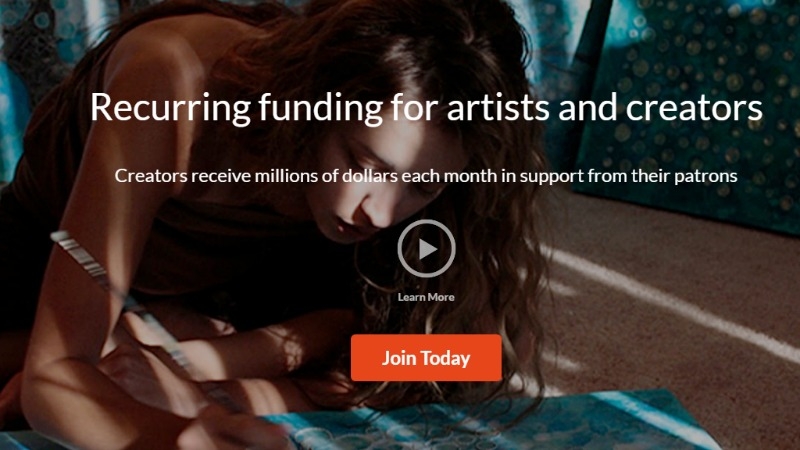 Patreon is different from most other crowdfunding sites in that operates on a subscription-based model rather than a one-off bulk payment. It’s primarily aimed at finding support for typically underfunded creative producers, like writers, artists, musicians and podcasters. In the words of the site, ‘Creators, come get paid.’ A great way to monetise that side-hustle.

The site has allowed creators to collect over $150 million in funding, and claims that the average patron gives more monthly than to subscriptions like Netflix and Amazon Prime.

5 percent of funds raised goes to the site, and another 5 percent on transaction fees. 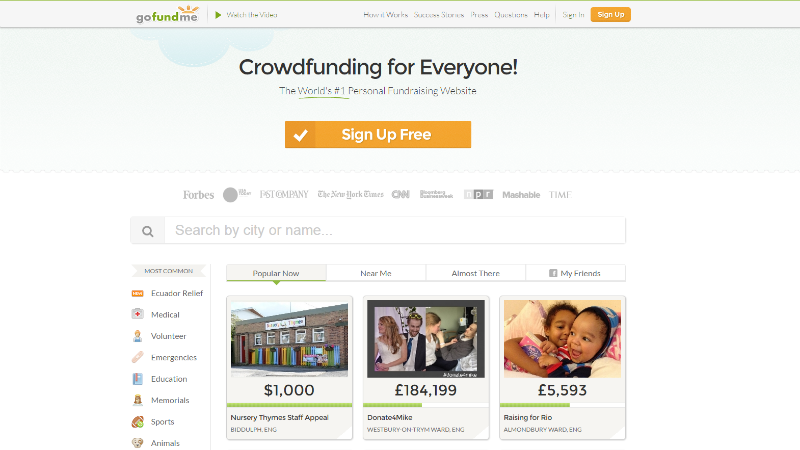 The most casual amongst crowdfunding sites, it adopts an informal tone for generally small-scale, personal or charity projects, rather than potential money-spinning innovations.

It’s had some bad press in recent years with the rise of privileged young people using it to fund their travel plans. Although it has funded far more sincere causes like raising money for obscenely pricey medical bills or for charity causes.

More than $5 billion has been raised on GoFundMe from over 50 million donors.

Unlike most other crowdfunding sites, GoFundMe is free to use, sidestepping any platform fees.

Best for: Millennials ‘on a journey’ (just kidding) 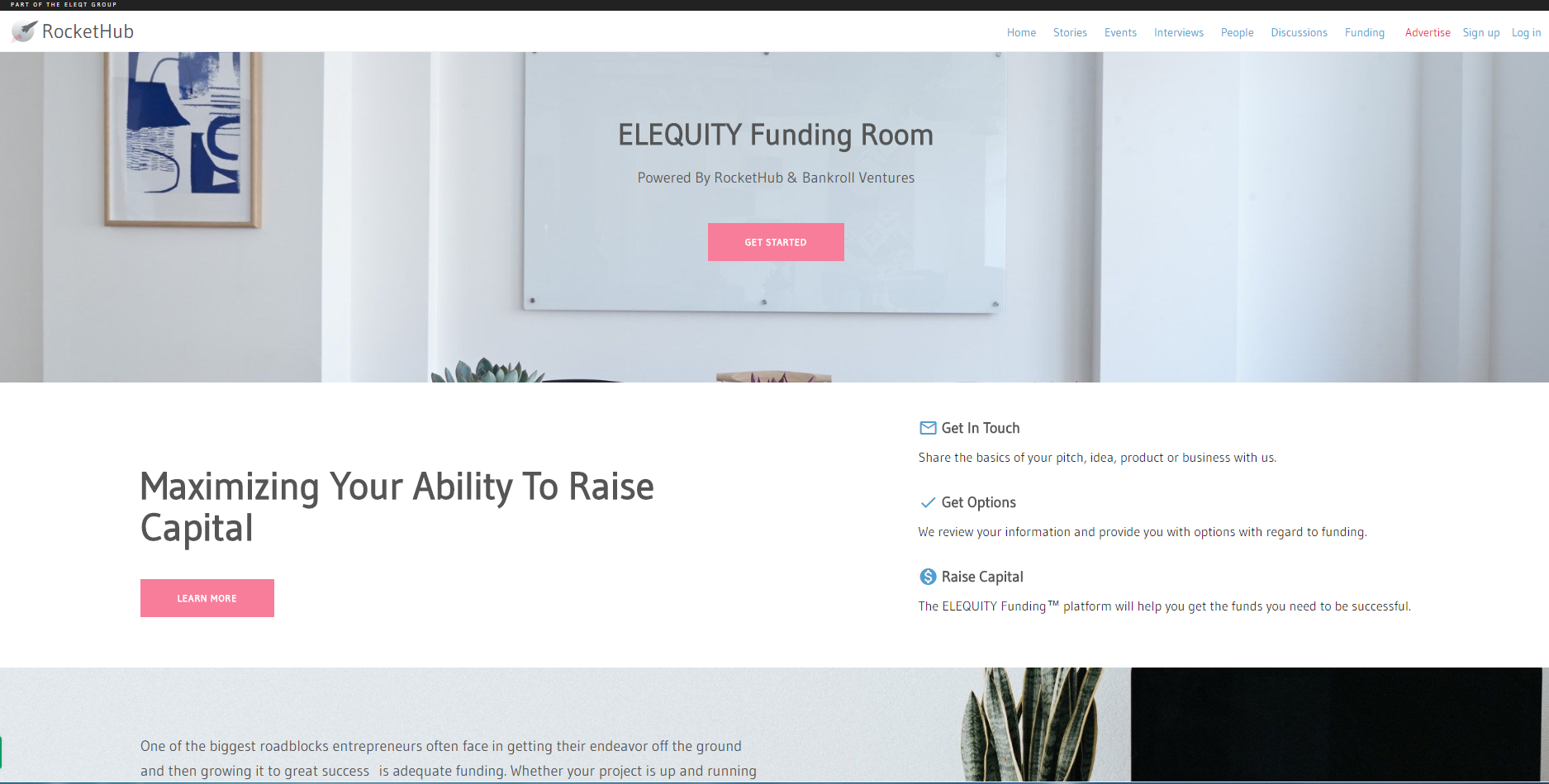 Rockethub is a platform aimed at novice entrepreneurs hoping to get their business idea off the ground. You have to pitch your business or product idea to them and – if accepted – will be provided with options on how best to raise funding, as well as the opportunity to use their ELEQUITY Funding™ platform to raise capital.

One business raising money from investors on the site is Scotland-based craft beer company, Brewdog, who have won the investment of 46,000 ‘equity punks’ so far. 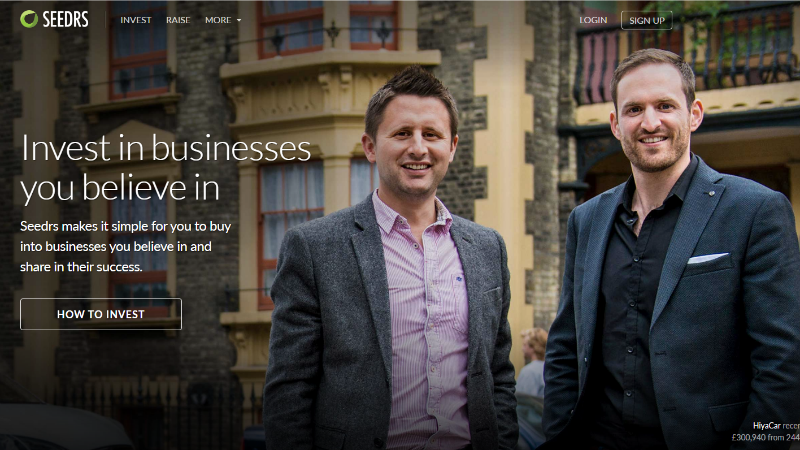 Billed as an equity crowdfunding site, Seedrs is most definitely aimed at potentially lucrative business ideas. The investor network includes angel investors and venture capitalists alongside your friends and family. Businesses on the site range from idea-stage startups to publicly traded companies. Investments are uncapped but will buy the investor voting shares in your company.

The site has racked up over £355 million in funds raised.

Seedrs Alumni businesses now appear on a database on the site for investors to buy shares in.

If your campaign is successful, you’ll pay 6 percent of total funds, 0.5 percent payment processing fee and a one-off payment of £2,500 in admin fees.

Best for: Access to angel investors and venture capitalists 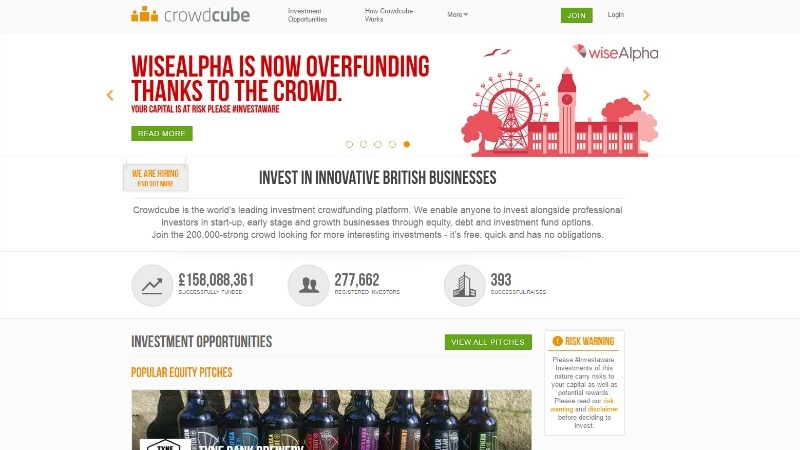 Crowdcube is a UK based crowdfunding platform aiming to provide funding for business pitches. The site provides expert advice on how to deliver a well-polished pitch, communications plan and realistic target, before you launch the fundraiser on the site.

It has raised over £400 million so far for business ideas, and counts 521,911 registered site members who donate average investments of £1,430 per project. Crowdcube takes a cut of 7 percent on funds successfully raised as well as payment processing fees.

The stats are promising, with an average of £670,000 raised for each project.

Most successful project: To date, the largest amount of money raised was by Brewdog, the craft beer brand, which raised £10 million on the platform. 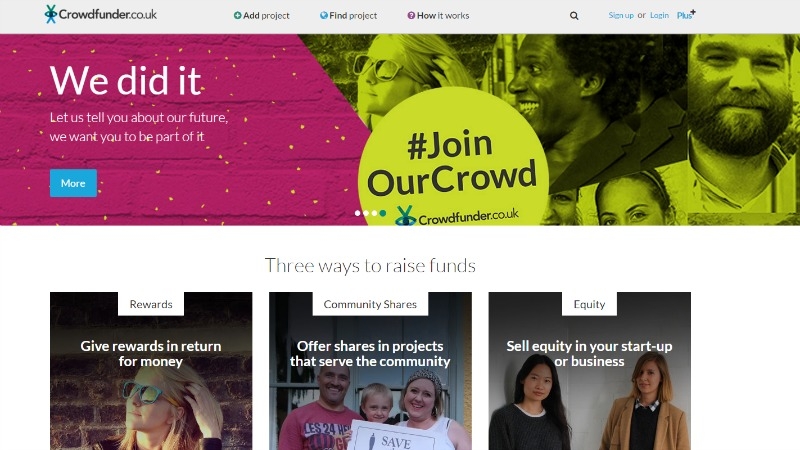 Crowdfunder.co.uk aims to match entrepreneurs with a conscience with potential investors. It has raised over £50 million for projects across the UK. The site is particularly geared towards endeavours that promise social value such as community work or projects benefitting society or the environment.

The site also has a number of in-depth guides about how to successfully launch and promote a crowdfunding project.

If your project raises money, 8 percent will be deducted for platform, payment processing and VAT fees. 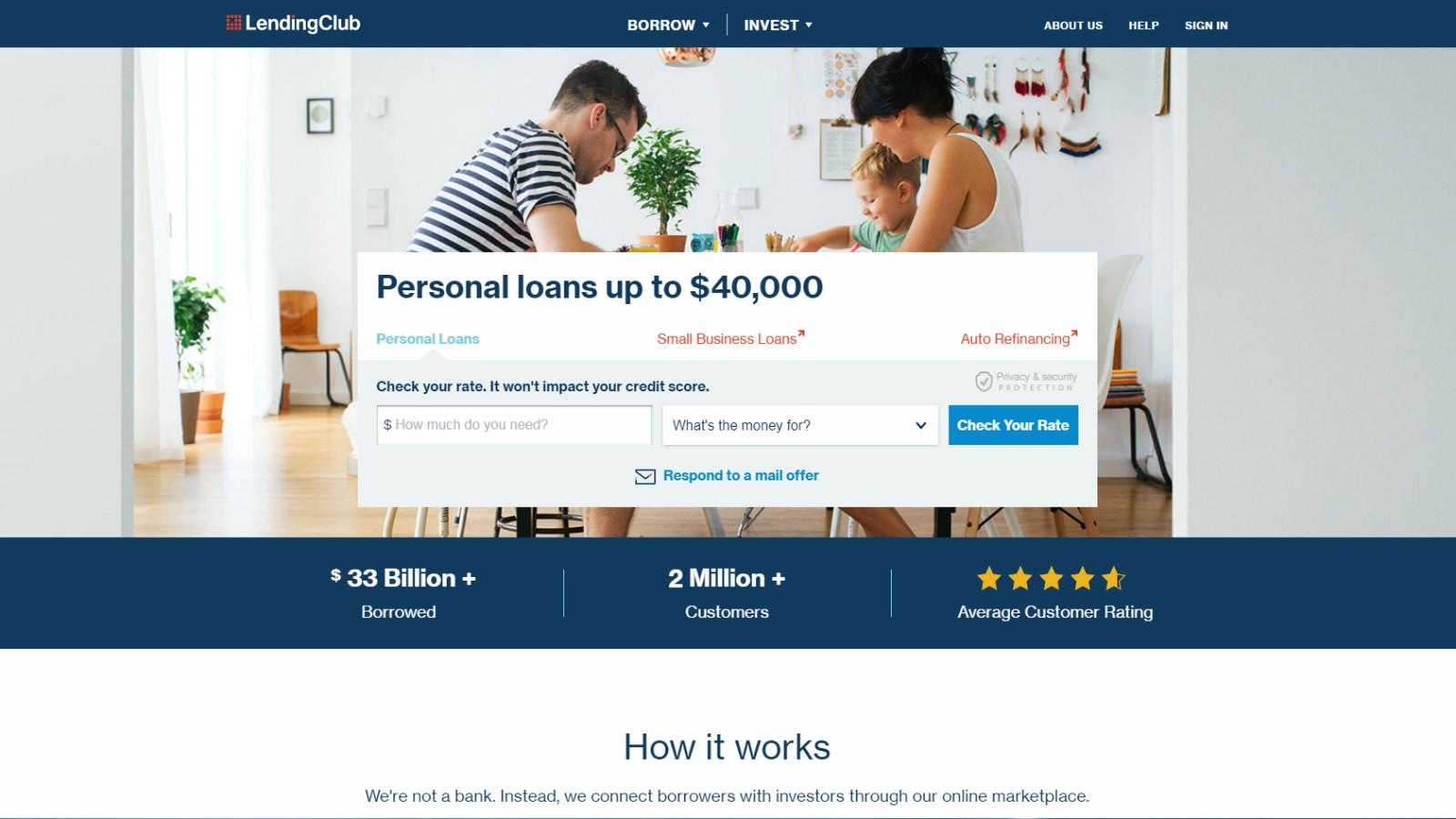 Lending Club provides loans to small businesses. You can receive personal loans of up to $40,000 and business loans between $5,000-$300,000 on which the investor will make between 5.5-7.5 percent in interest.

To be eligible for a business loan you must have been in business for more than 12 months, bring in at least $50,000 annually with no recent bankruptcies. The terms are more lenient than most online lenders, and unusual businesses are more likely to get funded than from a bank.

To date, more than $28 billion in loans have been granted through Lending Club, and 95 percent of users would recommend a family member or friend to use the service.

Alternatively, Funding Circle is a peer to peer lending service that has provided over £3.4 billion to 35,623 UK businesses. Businesses can be granted loans between £5,000-£1 million with 3 percent rates per year and no early repayment fees. The bar is higher for this site though – on average, businesses granted loans have been around for at least 8 years with an annual turnover of £420,000. 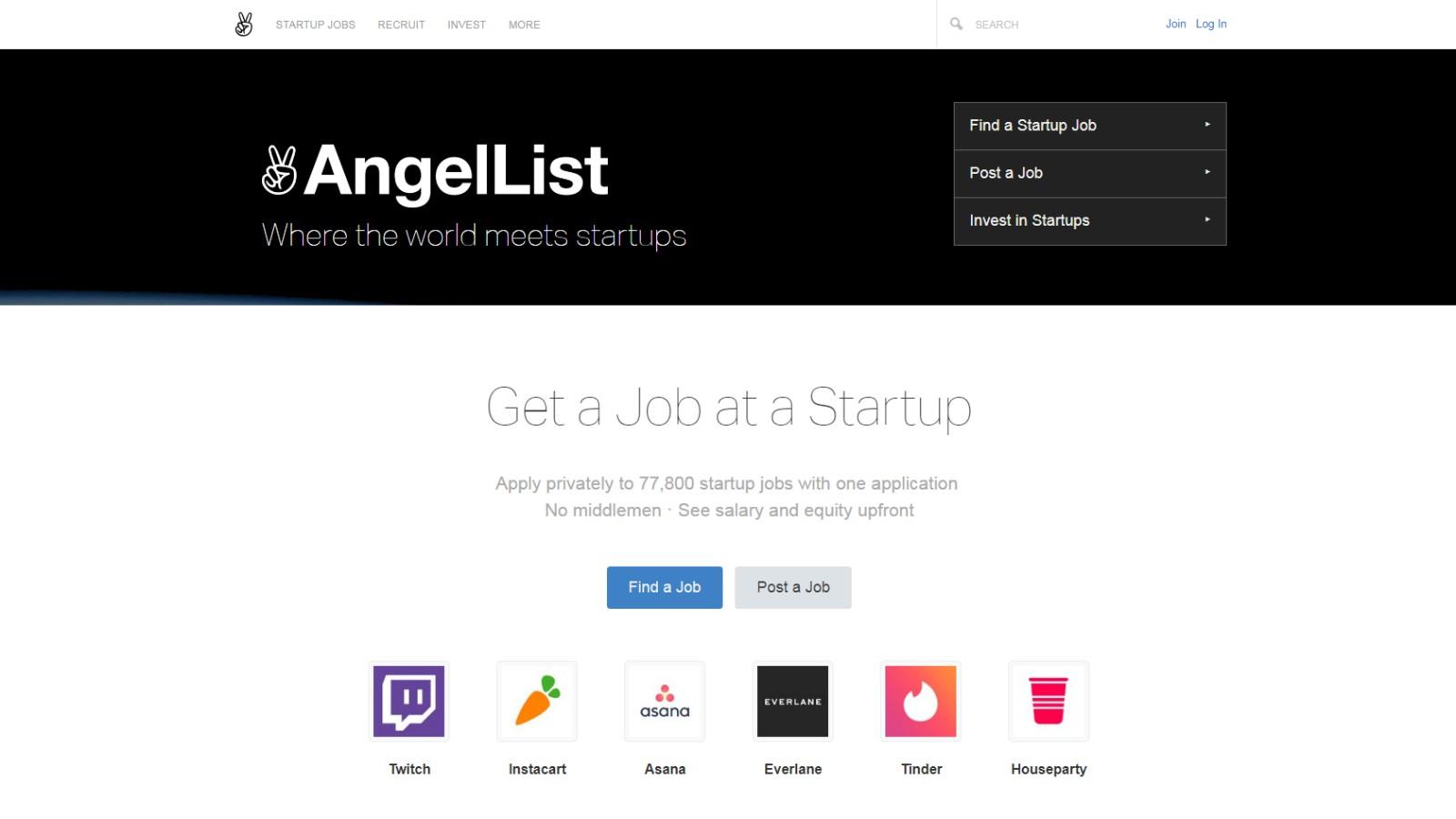 ‘Where the world meets startups.’ Ever wanted to apply to a job at a startup? AngelList allows you to apply for 77,441. With one application. This site is more suited to those looking to develop their careers in startups (something to consider if your idea doesn’t pan out).

You can also invest in startups by contributing to private, single-deal venture capital funds led by seasoned technology investors, although it’s less clear from the site how to sign up as a startup seeking investment.

Best for: Plan B if your startup idea bombs