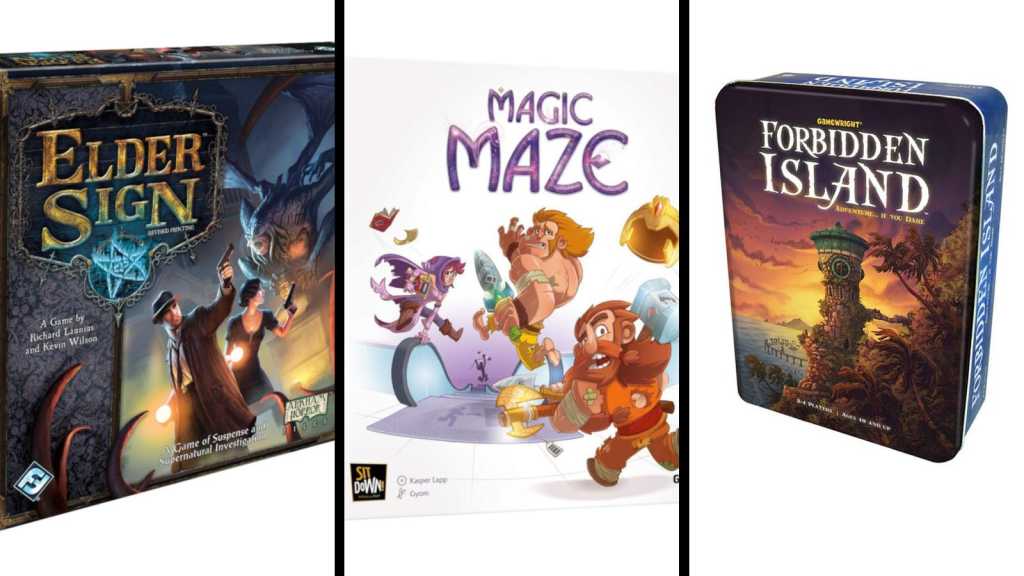 At times of isolation – which can include cold weather, injury and antisocial job postings, as well as society-wide virus lockdowns – it’s important to keep yourself entertained. The humble board game may not seem like the ideal solution, depending as it usually does on human interaction and physical components, but there are ways to make it work.

We’ve already rounded up our favourite board games, but in this article we focus specifically on the best board games for solo play.

However, if you’d rather play the same board games you do normally, jump ahead to the general advice section where we discuss software and web services that are ideal for bringing together board gamers who can’t be in the same room.

Co-operative games are a great choice for solo players: even if they’re not designed for a singleton, you can still control the other person’s counters without interfering with the fundamental mechanics of the game.

The brilliantly atmospheric Ghost Stories works fine with just one player. You control a warrior monk or monks (you can pretend to be more than one if you like) whose job is to protect a village from relentless waves of ghosts. Fight off enough ghosts and eventually the ultimate villain Wu-Feng will appear, and that’s when it really kicks off.

Elder Sign is the baby sibling of the sprawling Arkham Horror and Eldritch Horror games, a dice-based spin-off that simplifies the ruleset (and playtime) without sacrificing any of the Lovecraftian ickiness.

All three games share a rough premise – you play as one of several investigators working together to hold back multi-dimensional threats right up to Cthulhu itself – and all work for solo play too, but Elder Sign would be our pick. It’s quicker and simpler to set up, you can play a round in a couple of hours (rather than eight for Eldritch Horror), and it’s still fiendishly difficult enough to encourage replays.

Even better, you can get it on Android or iOS if you don’t want the faff of the physical set. Dominic Preston

What a charming and brutal game Agricola can be. It’s all about farming for food, and you do this by allocating roles: on a given turn one member of your family may be directed to plough a field, sow seeds, build shelter for your livestock, go fishing or bake bread. Or… have some more children. That, very amusingly, counts as an ‘action’.

The larger your family gets, the more things it can accomplish, but the more mouths there are to feed, and that can come back and hurt you later. Like all things, it’s a balancing act, and finding the optimal solution is deeply satisfying.

Forbidden Island isn’t designed to be played alone, but it works surprisingly well. This co-op game from Pandemic designer Matt Leacock normally sees players working together to navigate a tile-based island, collect four treasures, and escape before the whole thing collapses into the sea.

Each adventurer has different special skills, and it’s intended to be played transparently, with open hands. That makes it ideal for solo play, as you can take control of up to four adventurers yourself and avoid worrying about any of that pesky co-operation anyway.

There are also two sequels, Forbidden Desert and Forbidden Sky, so there’s more to move on to if you fancy something a little more complex. Dominic Preston

Those experiencing the worst effects of the COVID-19 outbreak may find this one a bit close to the bone, given that the game’s events are currently playing out in real life. But if you can put that to one side,  Pandemic is legitimately the best co-operative game I’ve played and (despite being officially for 2-4) works great with a single player.

You’re battling not one but four separate illnesses spreading around the world. Each turn your characters – medics, scientists and logistics experts of various sorts – do their bit, and the infection spreads. It’s a race against time, and hugely tense.

I thought for a long time about including the excellent Magic Maze in this list, for the simple reason that its greatest mechanic is lost when you switch to the solo mode. But I think it still works well.

Magic Maze is a silent co-operative in which you move a team of adventurers around a dungeon – the twist being that each player has a limited range of actions (move left, say, or ‘go upstairs’) so you need to work closely together, despite not being allowed to talk to each other about where to go next. Oh, and did I mention that it’s against the clock?

In the solo mode you sadly lose the meaningful glances and recriminations about obvious moves, but you gain a different and perhaps more mind-bending alternative mechanic. The player has a stack of actions and works their way through them – so you first have to turn left, then climb some stairs, then turn right, and so on. Properly weird, and fun.

How to play board games on your own

Okay, let’s say you don’t want to change the games you play – you’d rather change the way you play them. What’s the best solution?

Obvious one first: if you buy a copy of your favourite game for a computer or console, you’ll be able to play against AI opponents, or human ones online. Digital versions are also generally a lot cheaper than the physical equivalents.

I’m an iPad gamer, and therefore lucky in this regard: board games work great in this format, and there are versions of nearly every game I love on Apple’s App Store. Particular favourites include Carcassonne, Catan, Splendor, Agricola, Puerto Rico and Ticket to Ride, but most of the big titles are on there if you look: read Best iPad board games for more recommendations.

PC editions of board games are also numerous. Obviously a digital download is required in many of the situations that necessitate solo gaming, so Steam and Green Man Gaming are worth a look.

For an experience that’s closer to the real thing, set up a virtual gaming environment in which you and your friends can play. There are several software products that enable this.

Tabletop Simulator is a popular virtual sandbox and is available on Steam and Green Man Gaming. It comes with 15 classic (ie copyright-free) games included, such as chess, dominoes and Mahjong, but its real power comes from the ability to import a huge range of custom and community-created games.

There are other options, however. Boardgamearena and Boiteajeux both let you play games through your browser. Vassal Engine and Tabletopia are worth a try too.

Finally, check for online versions of the specific game you want to play. We’ve been playing a lot of internet scrabble recently, for example.

Skype and FaceTime (since Apple added group FaceTime calls) are both excellent ways to play games remotely. You’ll need to trust the person who has the physical board game in front of them, of course.