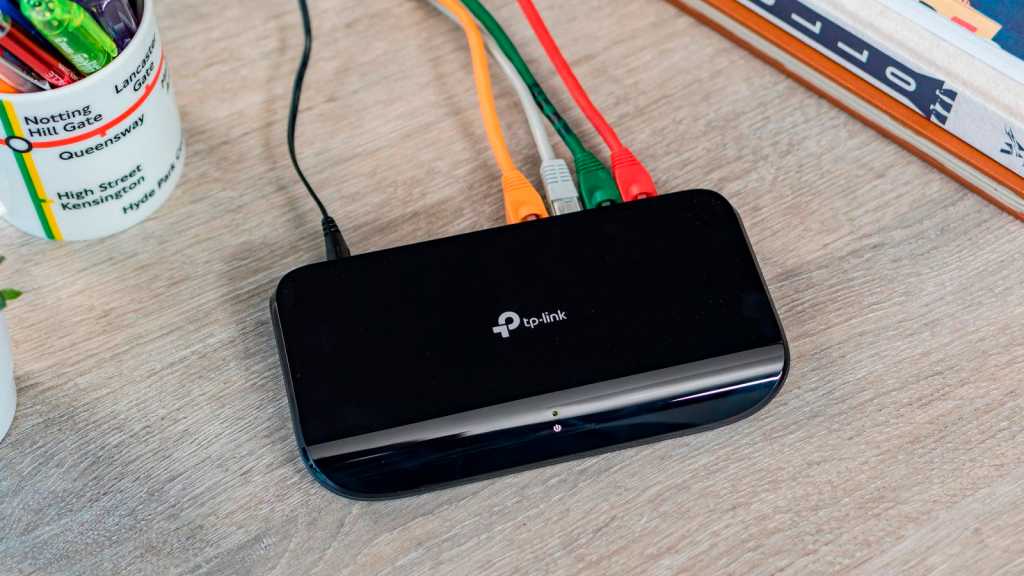 If your router doesn’t have enough ports to connect all your set-top boxes, smart home hubs, games consoles and other devices, an Ethernet hub is the answer.

They’re inexpensive little boxes which work much like a multi-socket mains extension lead that allows you to connect several electrical devices to a single wall socket.

They don’t require any configuration or technical know-how: you just plug them in and they work. (That’s why they’re known as ‘unmanaged’ hubs, in case you’re interested.)

Using Ethernet cables instead of Wi-Fi, even if you device has the choice of both, offers quite a few advantages. For example, gamers might prefer the wired option for their PC, laptop or games console to reduce lag when playing online games. Wi-Fi is good, but if you want the best speeds and reliability, Ethernet is the way to go.

Fortunately, Ethernet hubs are are cheap and easy way to add more ports to your router. And you could also plug one into a mesh Wi-Fi unit to do the same thing.

These little boxes (which are interchangeably called hubs, switched or splitters) attach to a LAN port on your router. Just remember that doing this uses up a port on the hub, so you end up with either four or seven extra ports, not five or eight.

When you connect an Xbox, TV, PC and any other wired network device to the hub it will work as if it were connected directly to your router.

If you need to put the switch in a different room to your router then you could connect the two with a pair of powerline adapters – it will make the connection slower, but it will at least make it possible without running a long network cable through your home.

There isn’t a great deal of variation between unmanaged switches from different brands. But there are subtle differences which can make one more attractive than another, whether it’s the ability to wall-mount it, the placement of the power connector, the orientation of the ports or even the visibility of the LEDs.

Price and warranty also come into it, as does construction and aesthetics, although the latter won’t be a high priority for many.

One point you will need to be careful of: speed. The models here are all Gigabit and full-duplex which means they can operate at 1000Mbps in both directions (i.e. sending and receiving) simultaneously.

If you see a cheaper option, it’s likely to be a 10/100Mbps version. This means the ports are limited to 100Mbps in each direction, and so are ten times slower. It’s never worth saving a few pounds or dollars for such a big compromise. Even if all the devices you need to connect are 10/100 right now, you’ll be glad you went for a Gigabit switch when you acquire a device that can take advantage of those Gigabit speeds.

None of these switches come with network cables, but we’ve taken the hassle out of choosing which ones to buy in our separate guide to the best Ethernet cables. 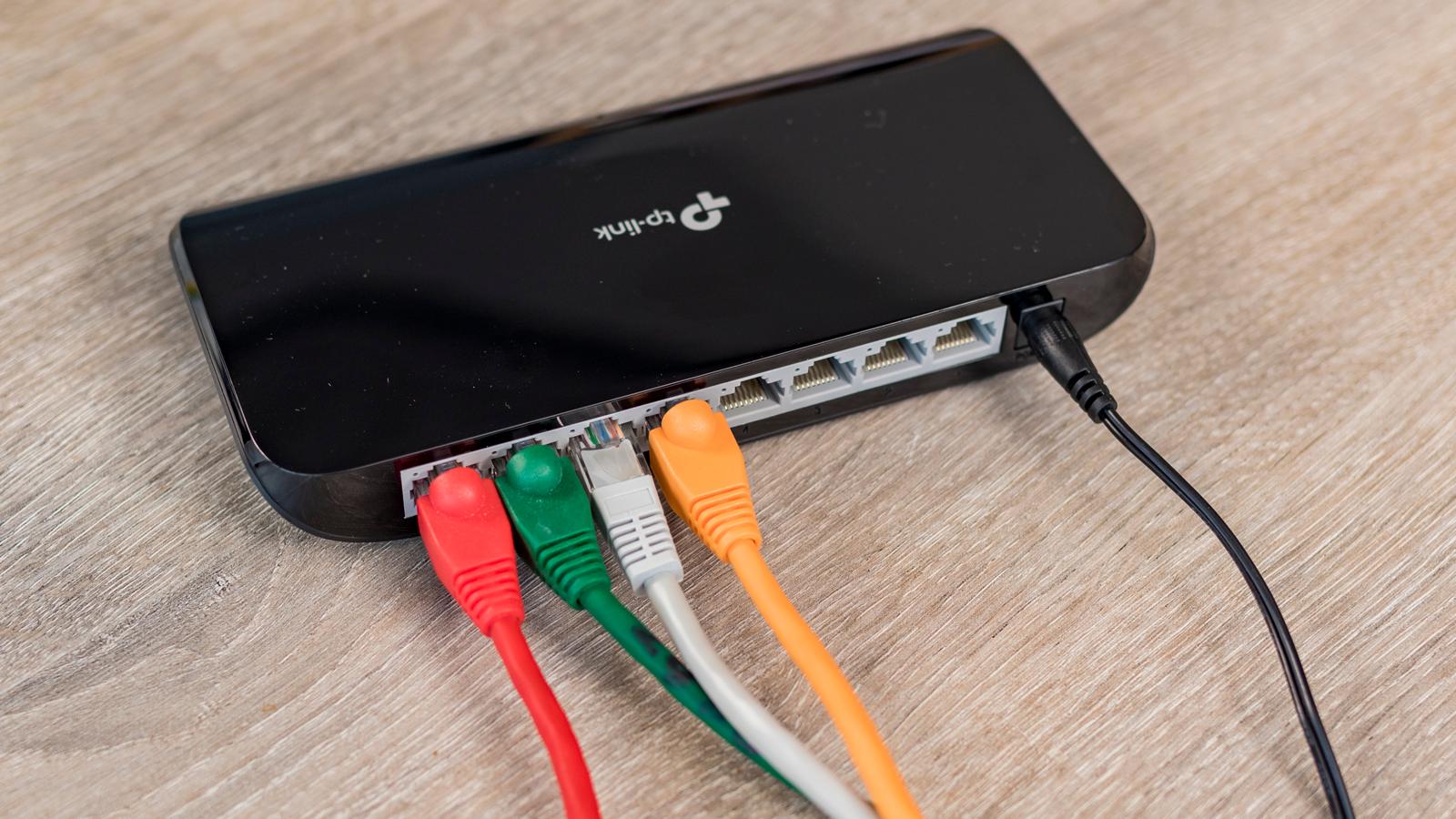 Like most manufacturers, TP-Link offers both metal- and plastic bodied switches. This plastic one is by far the most popular and it’s easy to see why.

It’s better looking, with a much less business-like design. The ports are at the back, but activity lights are at the front. So the cables can be routed away more neatly rather than emerging from the front of the device.

Unlike others here, the power socket is on the back, not the sides, again making for neater cable management.

If you need to, the SG1008D can be wall mounted and, again, the TP-Link is better designed than some as the release tabs for the cables remain accessible and not against the wall. 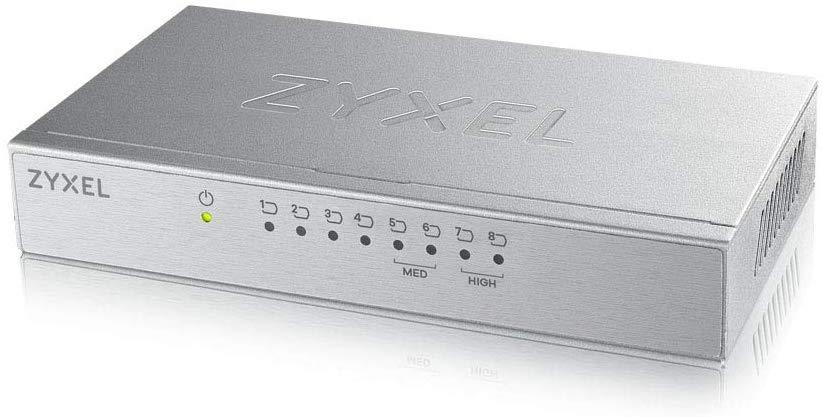 Zyxel’s hub is slightly unusual in that it has a metal body, but unlike most rivals it keeps the ports and power connector at the rear. It’s not bad looking, either, with its silver finish and slanted grille slots on the sides.

Another reason it’s unusual is because it offers QoS on specific ports. Ports seven and eight are for high-priority devices – such as media streamers or anything that relies on low latencies – and six and five are marked for medium-priority devices. The other four are for all other devices – and the connection to your router.

There are mounts on the underneath for wall mounting – or hanging under a desk – but bear in mind that the network ports face the wall (or desk) and so it can be tricky to release the tabs if you need to remove a cable from a socket.

There are plastic versions available, and these mirror the 5- and 8-port metal versions in design and also with their low, medium and high-priority ports. Since they’re no cheaper, it makes sense to buy the metal version, and it’s great to see a five-year warranty. 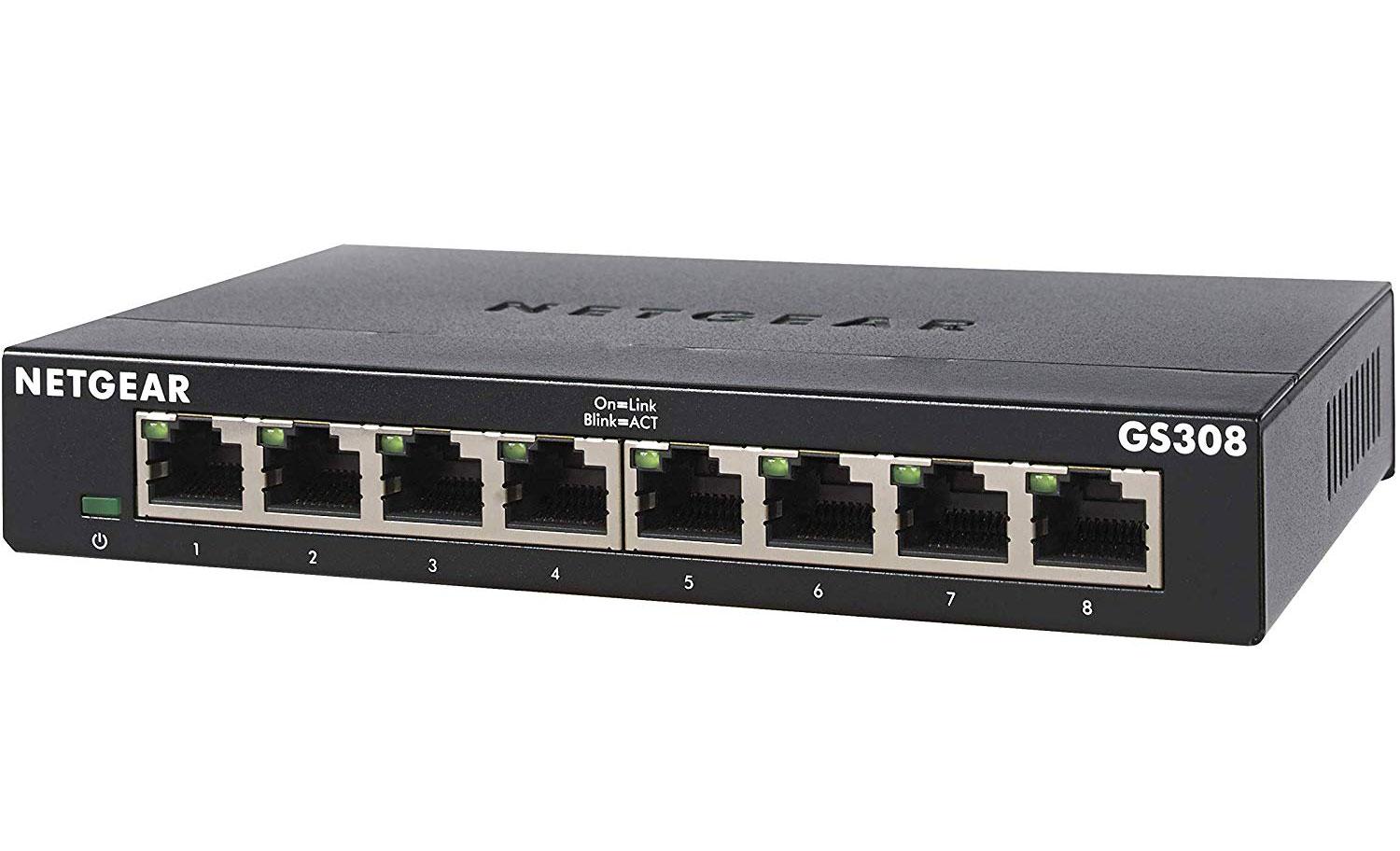 Netgear is another well-known networking brand which makes both plastic and metal-bodied Ethernet splitters for home use.

We’ve picked the metal version here because the GS908 – the plastic one – isn’t widely available and it tends to be considerably more expensive when you can find it. (Also, its cable management isn’t brilliant – the grooves aren’t wide enough to accommodate standard round network cable.)

The GS308, like other metal switches, has its ports on the front along with status LEDs, so isn’t going to look great if it’s on show in your living space. As the power cable plugs into the rear, you can’t simply turn it round: there will still be a cable emerging.

Tucked inside – or behind – a TV cabinet, it’s not an issue and, as you’d expect, it’s fanless for silent operation. Finally, it’s wall mountable if you need to hang it up. 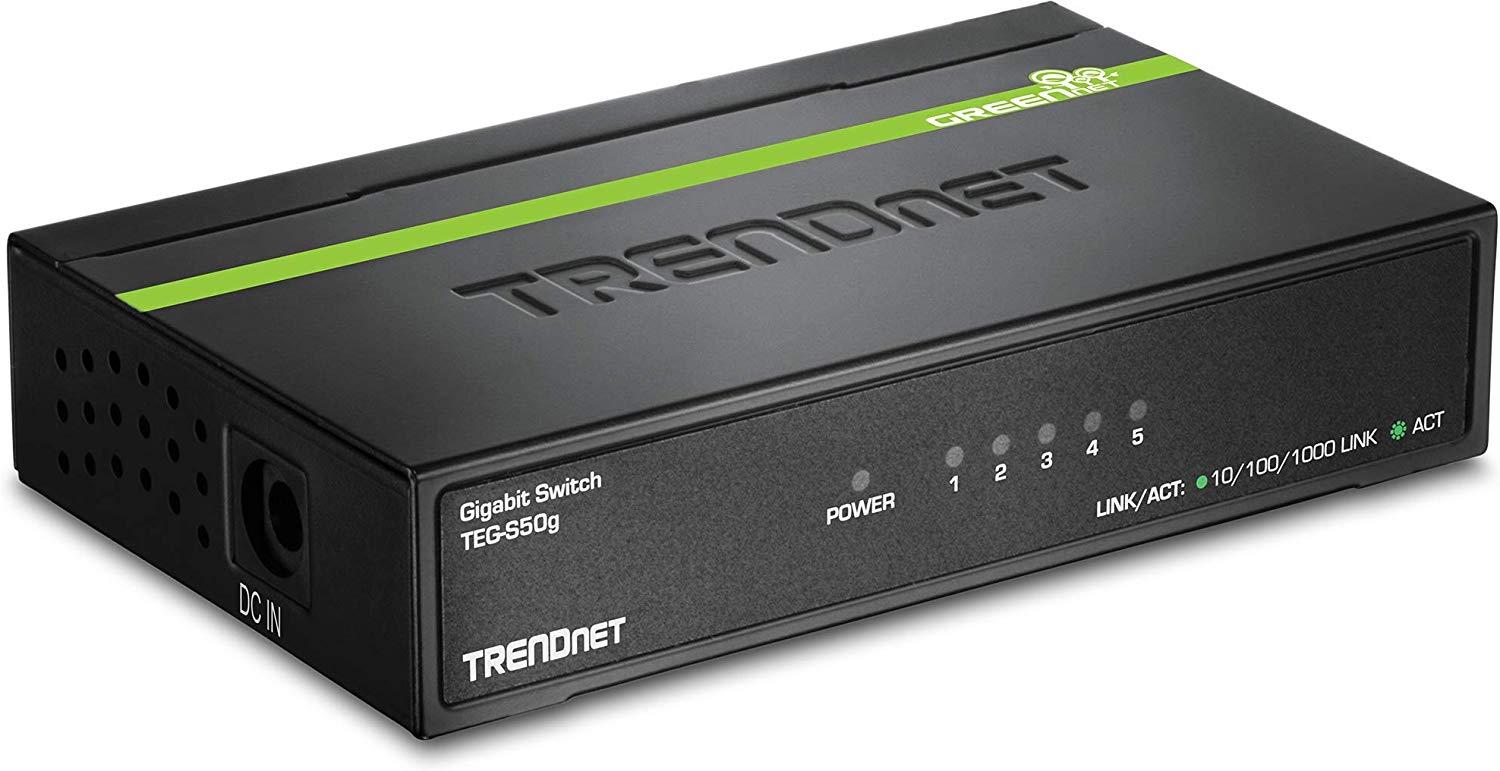 Trendnet’s unmanaged switch comes in five- and eight-port versions, but both seem to go out of stock regularly. There are both plastic- and metal-bodied versions, with prices varying accordingly.

Both are well suited to those on a budget. Remember that as with all hubs, one port will be used to connect it to your router, so there are four usable ports on five-port hubs and seven on eight-port hubs.

Note the side-mounted power connector – this can be awkward in certain situations.

Like the others here, it offers silent operation, low power consumption and plug-and-play setup.