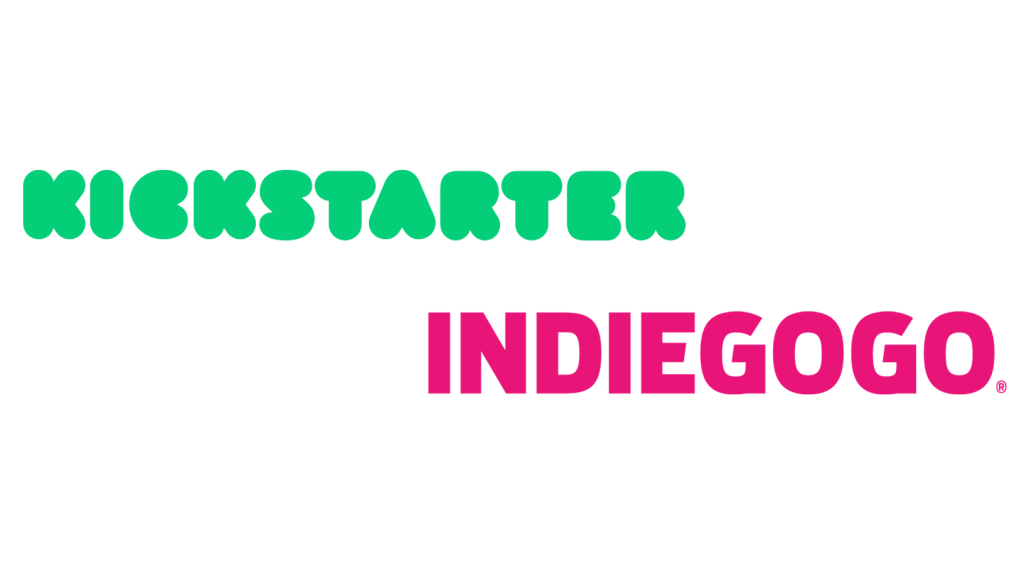 Browsing the virtual aisles of crowdfunding sites like Kickstarter and Indiegogo can be a dangerous business, as you’re bound to find numerous tempting projects that just cry out to be backed. Of course, it pays to be choosy when it comes to investing money in these products that don’t strictly exist…yet. Knowing which items will make it to your doorstep can be tricky, but here’s our pick of the best products on either service that we think could be winners.

Creators can find it hard to raise the money to independently fund a project, at least not without giving away large parts of their company or future profits – as anyone who has watched Dragon’s Den can attest. So, rather than sign over their lives to already wealthy business-people looking for easy money, crowdfunding sites allow lots of individuals to invest in a project and thus make it a reality.

Kickstarter and Indiegogo are two of the biggest platforms in this area, putting together creators and those willing to back them. The way it works is that you pledge to buy the product, pay for it upfront, then when the campaign reaches its financial target the money is released to the creator and manufacturing can begin. It’s the ultimate version of the ‘market’ deciding what does or does not get made.

Of course, as with any investment, your money is at risk. Some products encounter difficulty along the way, causing long delays, while others never arrive due to bankruptcy. It’s a small percentage, but one you need to consider when backing any project.

Here’s more on the ins and outs of buying from Kickstarter and Indiegogo.

There are no guarantees, but if a campaign looks professionally run, has lots of backers and updates its pages regularly, then there’s a very good chance the product will be delivered as promised. So, if you’re looking to take part in this exciting process, and help make an inventor’s vision come life, here’s some projects that we think have what it takes.

Steve Jackson Games have been in business since 1980 and it was barely a year after it began that the first edition of Car Wars was released. This table-top game sees highly customised, futuristic automobiles battle it out in the arena of 2069 to find the ultimate champion.

The series have already sold over one million units over the course of its life, and this new streamlined edition should be a huge success for fans of the genre. At the time of writing the Kickstarter project goal was to reach £61,566 but pledges had already demolished that total, reaching £338,496 with still a month left to run.

£40/$51 will get you the two-player edition, while £58/$75 will be needed for the full four-person version. Units should start shipping in November 2020 in the US, with European editions appearing in Feb 2021. 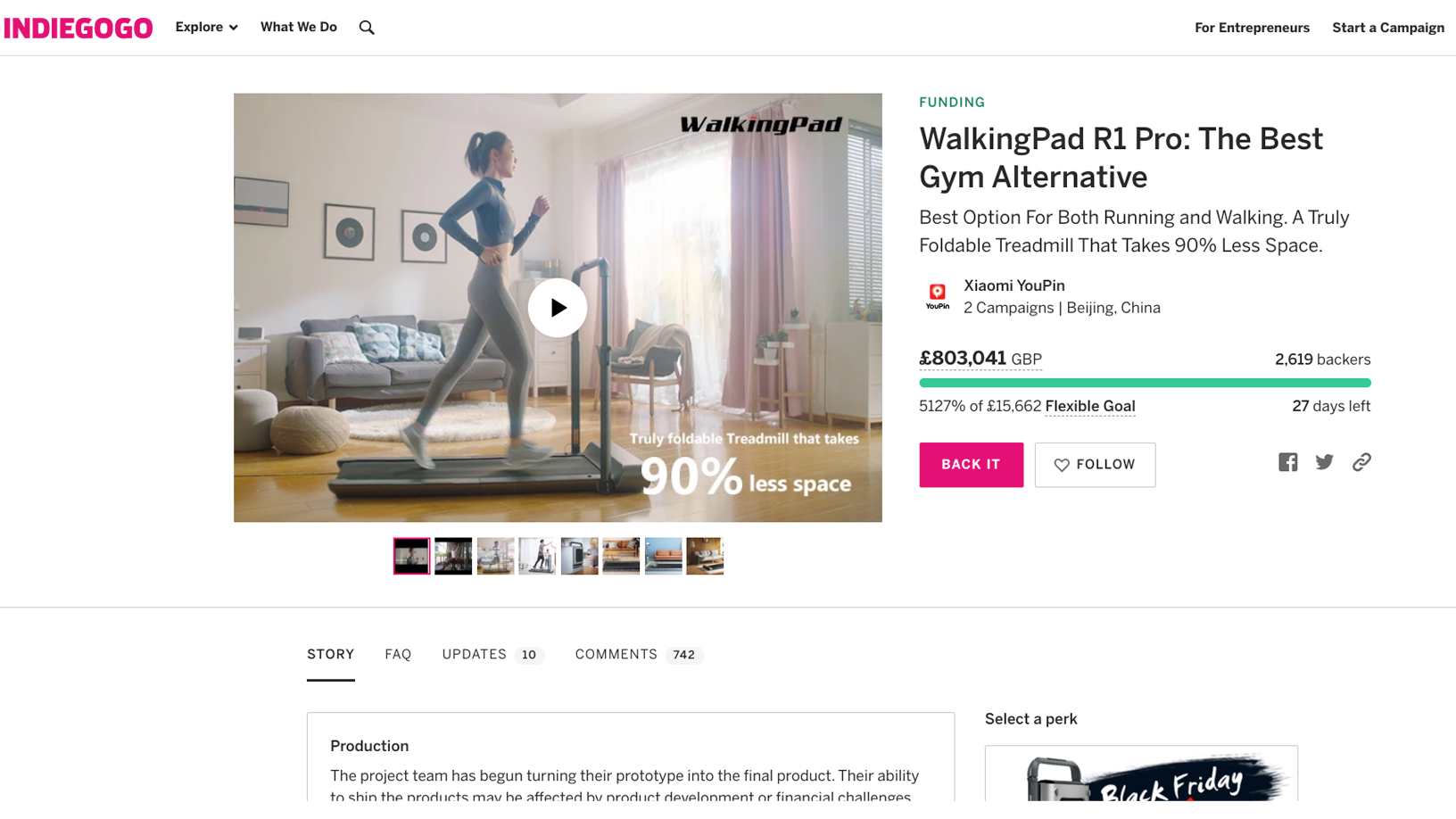 Want to get fit but don’t relish the thought of jogging in the cold and rain? A treadmill is a great alternative, but traditionally they take up a huge amount of room. Now the WalkingPad R1 Pro fixes this with an innovative design that means you can fold it up and put it under the bed or sofa when you’re not using it.

The Early Bird price is £329/$430 but they’re selling fast. Shipping is listed as December 2019, which is rather impressive as the campaign itself only ends mid-way through the month.

Ebo, The Smart Robot Companion For Your Cat 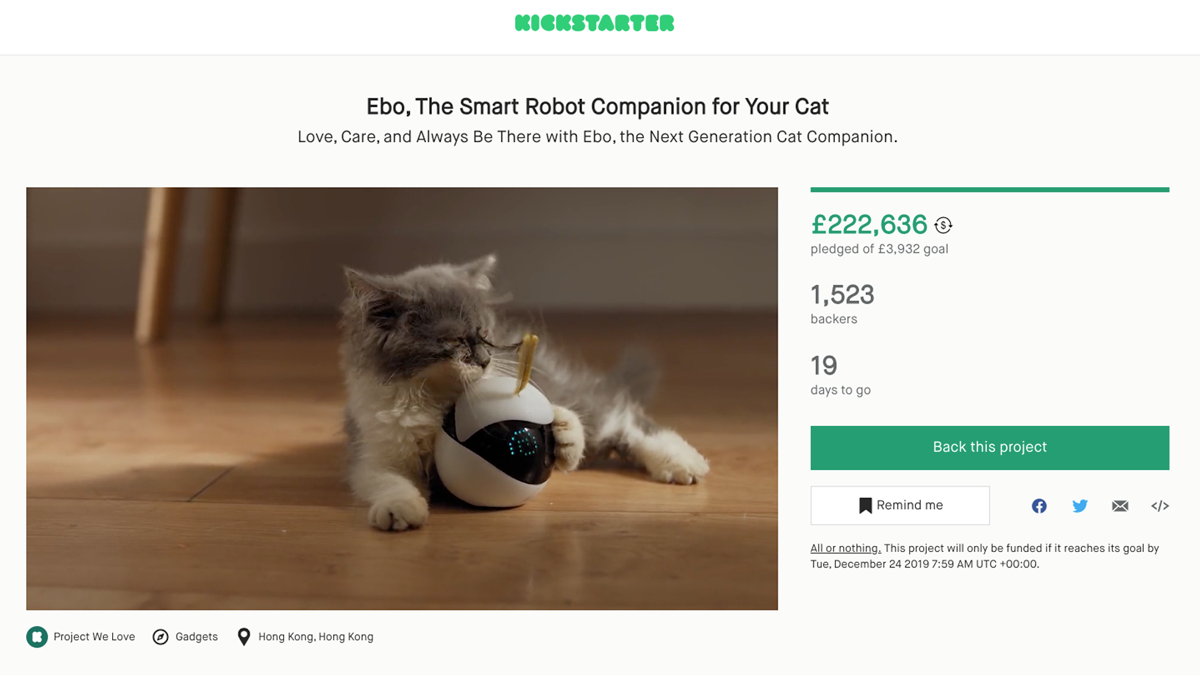 This little, spherical robot is designed to keep your cat entertained while you’re at work, and thanks to the inbuilt camera and WiFi capabilities you can also squeeze in some play-time with your moggy when the boss isn’t looking.

Ebo is made from all cat-friendly materials, making it safe for Tibbles to be left unaccompanied, and it even returns to its dedicated charging dock when the power runs low. Due to the level of electronics and mobility, Ebo isn’t the cheapest cat-toy you’ll ever buy, with prices starting at around £120/$160, but it’ll probably be the best.

Judging by the fact that it’s not only fulfilled its target but garnered enough support to raise 5,637% of the fund required, it’s also bound to be very popular. What’s more, the creators say that the item should start shipping before Christmas 2019, so you won’t have to wait long to it to arrive. 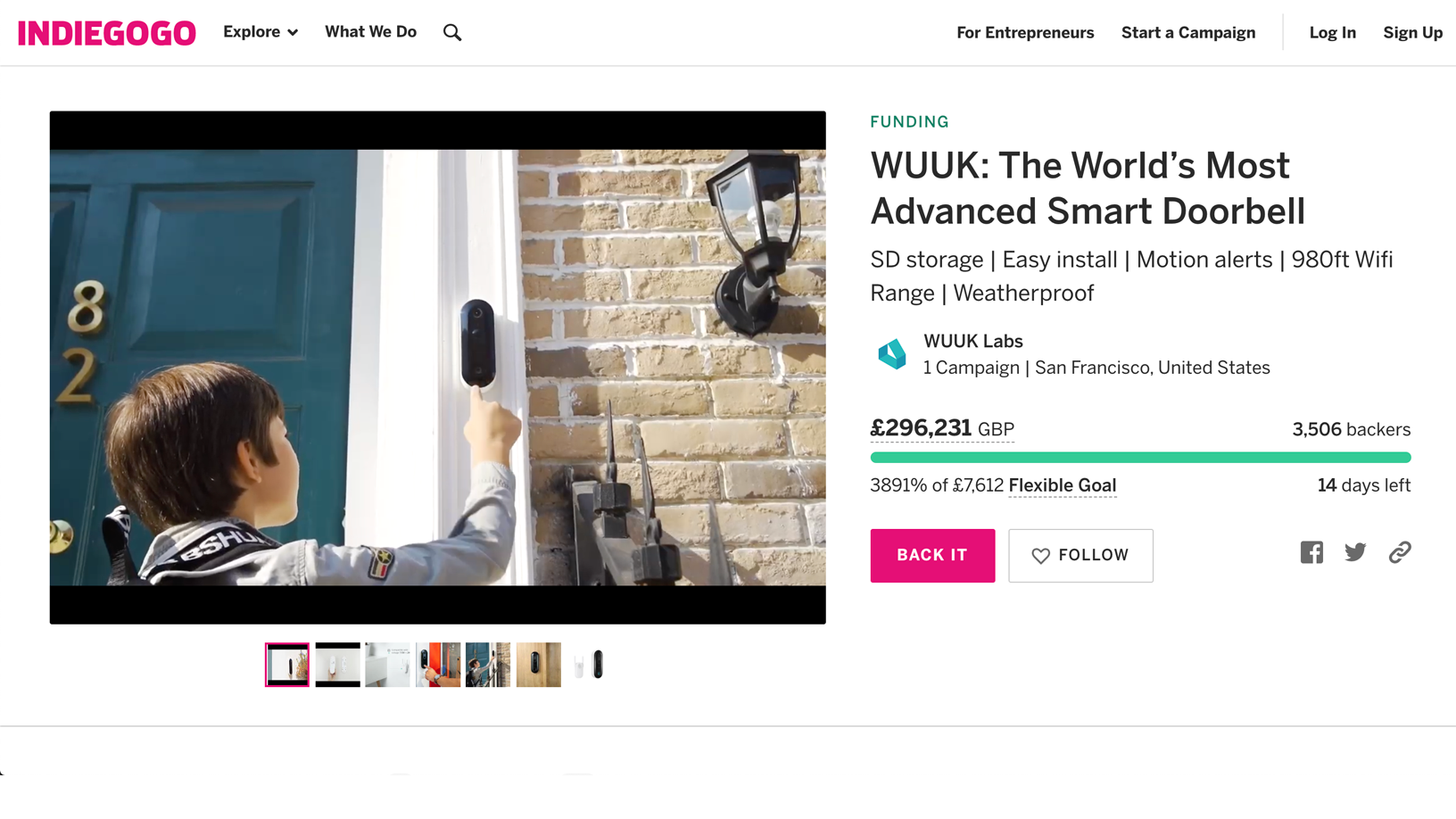 This smart doorbell is very easy to install as it doesn’t require any wiring or connecting to a power source. Instead, you remove the backing of the strong adhesive strip then firmly press the WUUK onto your wall or doorframe. Once on, it isn’t coming off, so all that you need to go to get it up and running is connect it to your WiFi network.

WUUK features a HD camera which allows you to see who is at your door, a microphone so you can talk to the person via your smartphone (even if you’re not at home), plus an interesting feature where your voice can be modified to sound like a different gender if you want to pose as someone other than yourself.

There’s also AI facial recognition so you can be alerted when a friend is outside, IR night vision to spot and midnight callers, and the battery lasts from around eight months.

The WUUK Smart Doorbell managed to achieve its target goal in an astonishing twenty minutes after launch, so this one looks pretty nailed on to be a hit. 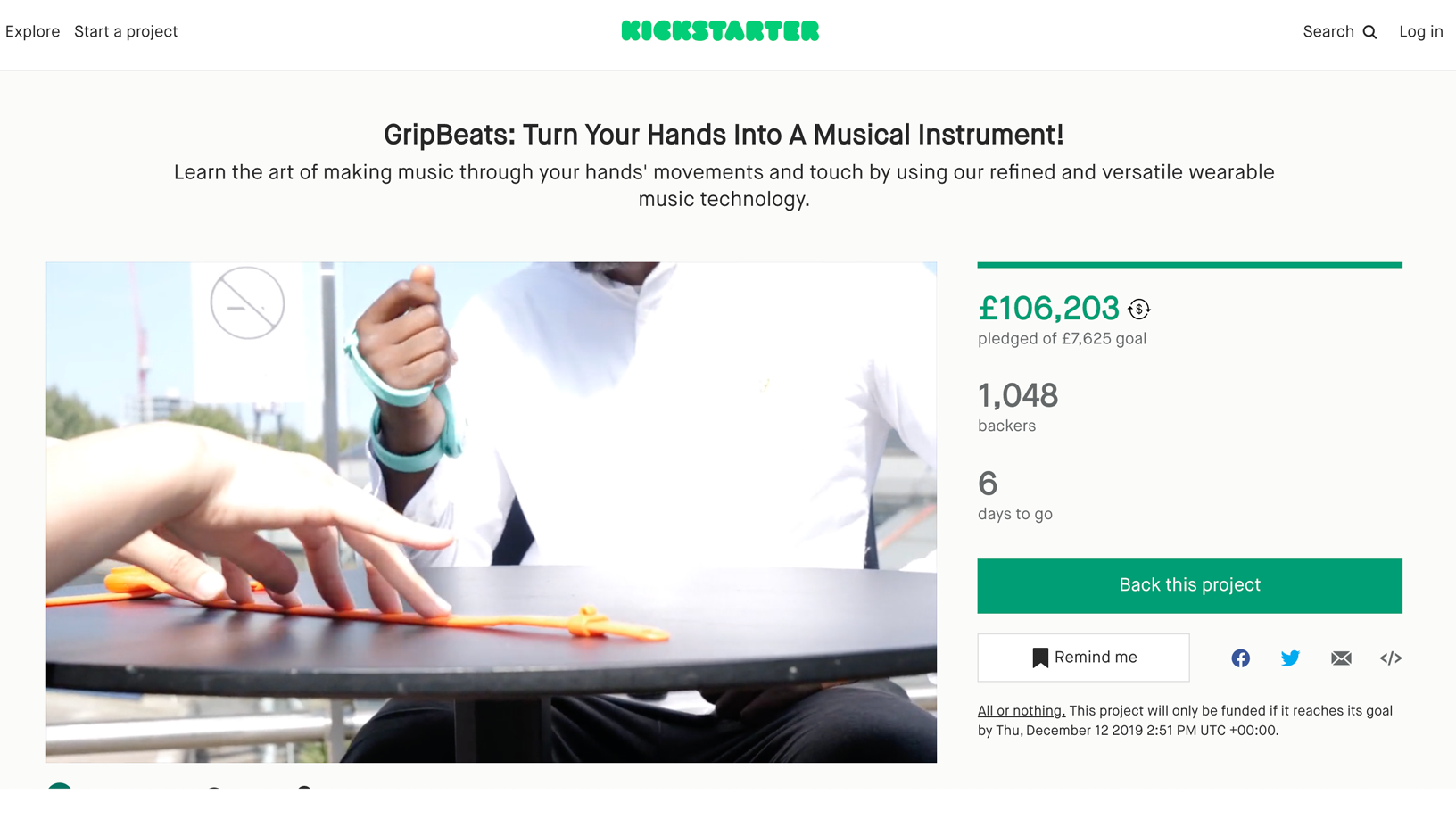 Creating music can be a complex and time-consuming activity, requiring years of practice as you learn to play an instrument. GripBeats looks to bypass this common blockage for most people by making a wearable strap that reacts to your movements and finger presses to produce rhythms and melodies.

Loading with sensors, the device acts as a controller for the accompanying GripBeats app with which you can tailor the sounds to suit your particular tastes. The whole thing is a more experiential form of creation, as opposed the discipline of traditional instruments. 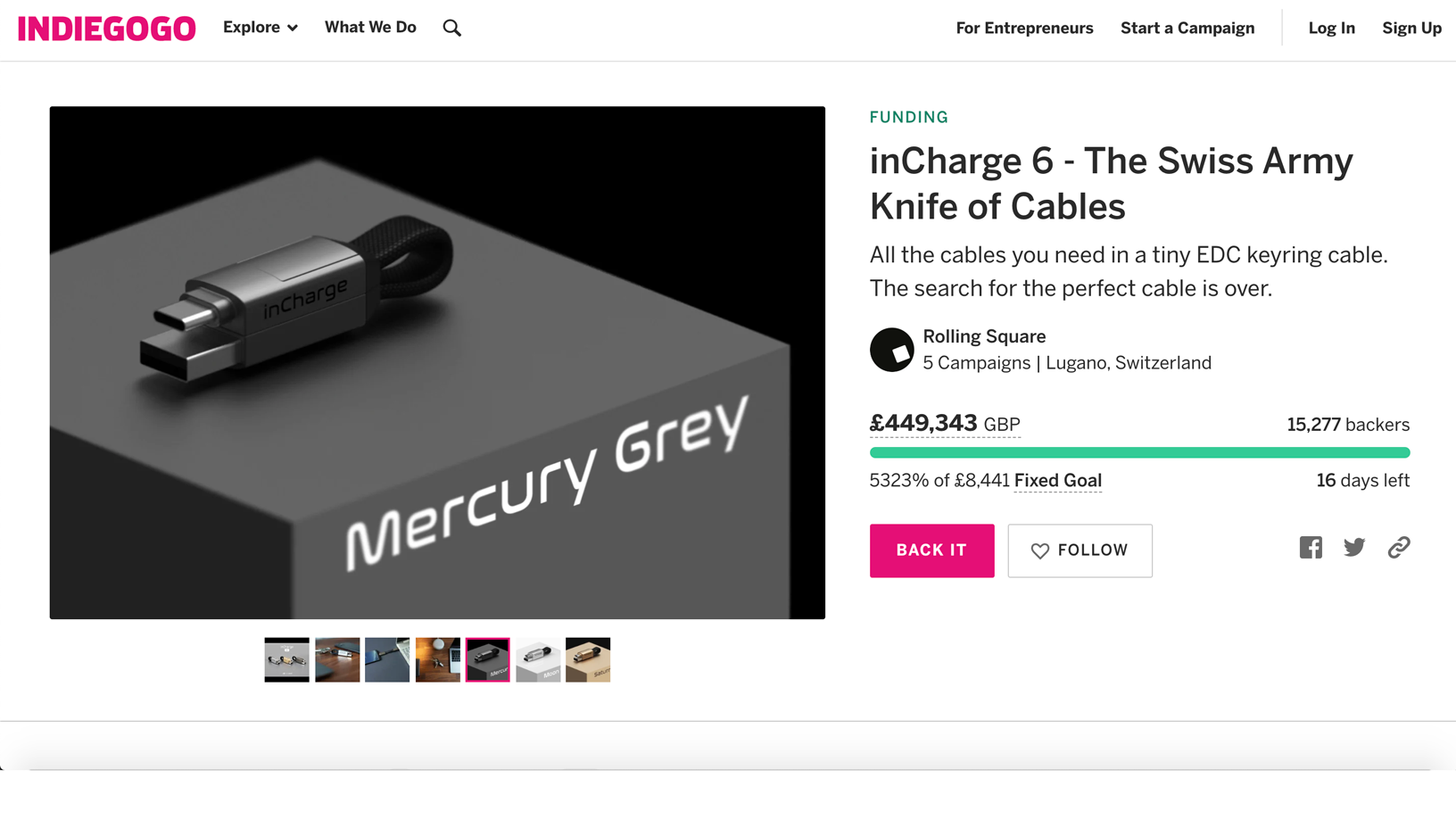 With many of our devices now having different ports and needing a range of cables to connect to each other, having the right one to hand can be a huge frustration. inCharge 6 seeks to solve this modern problem. The name kind of gives it away, as the unit comes with three connectors available at either end, all cleverly housed in sections that open in transformers fashion when required.

Small enough to fit on your keychain but built with material robust enough to survive being bashed about, the inCharge 6 could well be the most useful of all the products on this list.

Prices start at £10/$13 for the Early Bird, with shipping dates scheduled for December 2019.