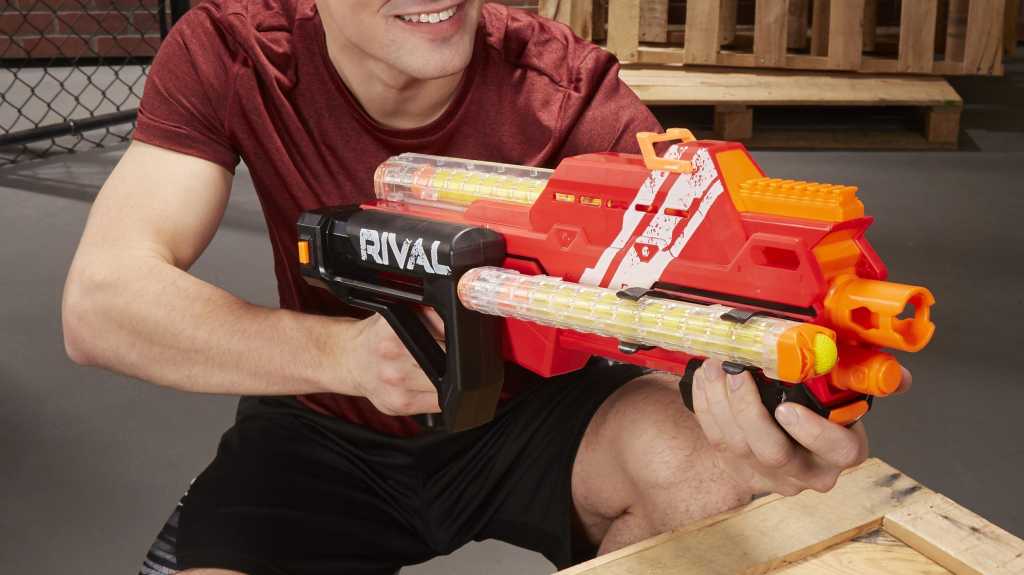 Toy guns have been a source of fun for children for decades, as they aim to make the potentially alluring prospect of combat into a safe leisure activity.

Whether it’s the traditional water pistol or more controversial BB guns, many different interpretations have been tried. However, nowadays it seems that foam-based weaponry is the preferred choice for many, with market leader Nerf at the forefront.

Its Blaster range has proven immensely popular to children and adults alike! However, with 18 separate lines, there is a wealth of choice out there. Here, we run through some of the best options available, with an eye towards the more affordable end of the market.

At under £10, this represents one of the most affordable ways to get into the world of Nerf.

Despite the price, performance is still strong, with darts able to travel up to 90m. The six-dart rotating drum is great for rapid fire, while the light and compact package means it’s great for sessions on the go.

The orange and blue design is typical of Nerf products, so you’ll be easily spotted in the heat of battle unless your movements are stealthy.

You might want to purchase some spare darts, but even 100 extra only bumps the price up to just over £15.

Fortnite has become something of a cultural phenomenon, so the partnership between Nerf and Epic Games was always going to be exciting.

This is a replica of the Blaster used in the game, so any regulars to a Battle Royale will be instantly familiar with it. The pump-action design allows for four foam darts to be fired back to back

It’s also hand-powered, meaning you’ll never have a battery to charge and will be in complete control over your weapon. 8 of Nerf’s elite darts are included, so you’ll always have spares on hand.

Nerf’s Zombie Strike range aims to be your best form of retaliation against the walking dead.

The FlipFury allows you to hold 12 darts at a time for rapid fire action, While the first six darts are released from the top, a secondary trigger flips the drums around so you’re ready to go again in an instant.

Shooting range is excellent, and as it is purely mechanical you won’t have to rely on batteries as you try to defeat the zombies.  It even comes with its own holster for carrying everywhere you go.

Its name might be a mouthful, but this gun more than makes up for it with its stellar performance.

Part of the AccuStrike series, its focus on precision is aided by what Nerf claim are the most accurate darts available. The included bipod allows for a level of accuracy that just can’t be replicated by going handheld.

Targets as far as 30 feet away aren’t safe with this gun’s superb range.

You can buy it for £46.47, but with limited availability in the US Amazon are selling it for  $149.99 so we’d recommend getting it imported.

The Elite Titan represents one of the most complete Nerf gun experiences on the market.

Its high price tag is justified by an immense 50 dart drum for maximum impact, while they darts themselves are suitable for indoor or outdoor use. It’s also fully motorised, meaning you can witness your devastating impact without having to put in all the work.

Without doubt, this is a heavy duty gun, but the included shoulder strap and intuitive controls should make it a joy to use.