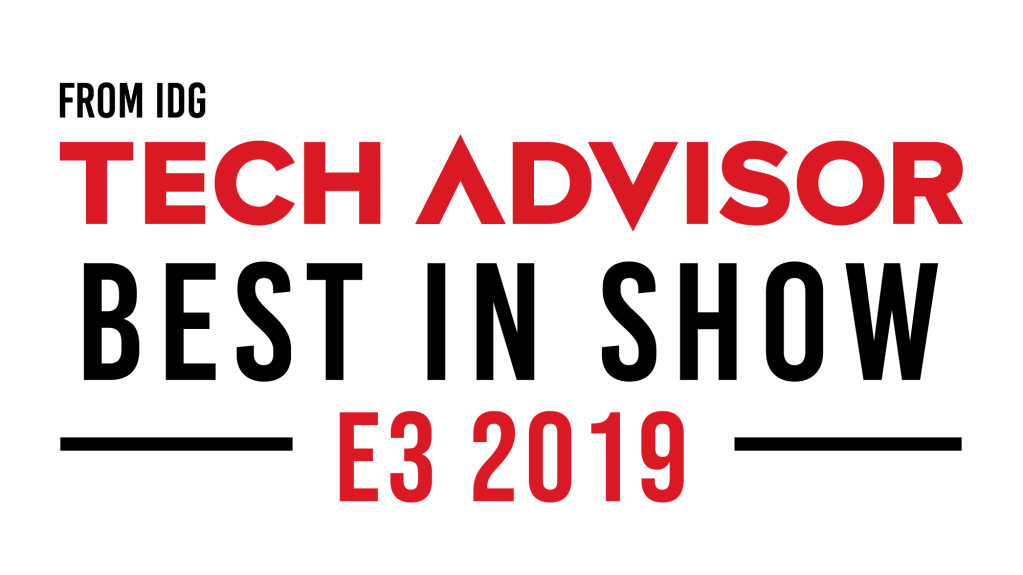 As you might expect, E3 brings with it a shed load of new games and hardware. Everything from niche indie games to AAA titles are vying for attention. Here, though, is the best of the 2019 show curated by our editors.

We’ve been trapsing round the convention center as well as getting behind closed doors looks at various games and bits of hardware in search of the most exciting stuff. Below you’ll see our favourite games followed by the most interesting hardware, which we’ll be updating throughout the show and beyond.

We loved hacking our way round the streets of London in Watch Dogs Legion. You might not have liked the second game but this is a return to form if you ask us.

Much of the style here is the same – ie a hacker version of GTA – but Ubisoft has done something somewhat mindblowing for a large open-world game. That is the ability to play anyone you come across, each with their own backstory and personality.

Futhermore, the addition of classes and perks add more complexity and customisation. Spiderbots, AR invisibility cloaks and various drones are loads of fun. London looks awesome too so we’ve got very little to complain about so far. 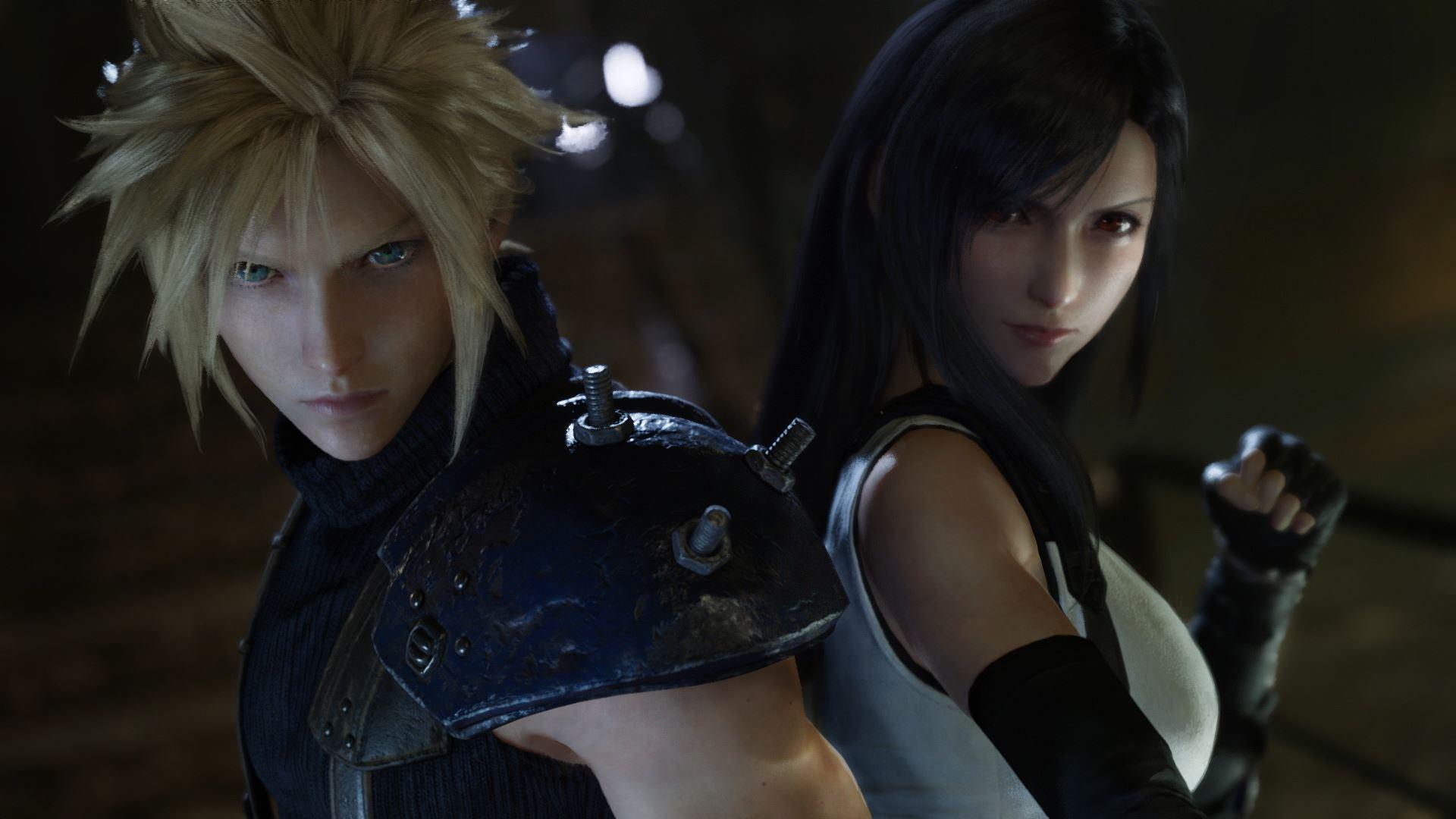 It’s been years and years and years since Square Enix announced plans to fully remake the classic Final Fantasy VII, and at E3 2019 it was playable for the very first time.

The scope of the game has expanded so much that the Midgard portion of the original will now be a full (2-disc!) game in its own right, with more sections to be released in due course, letting the devs massively expand the scale, the story, and the characterisation.

The graphics have naturally been completely rebuilt, but so has the gameplay, with combat now a really clever mix of fast-paced real-time action and slowed-down moments that recreate the classic JRPG action menu in a modern bullet-time format. This is the sort of inventive, ambitious remake that Capcom pulled off with Resident Evil 2, and we are here for it. 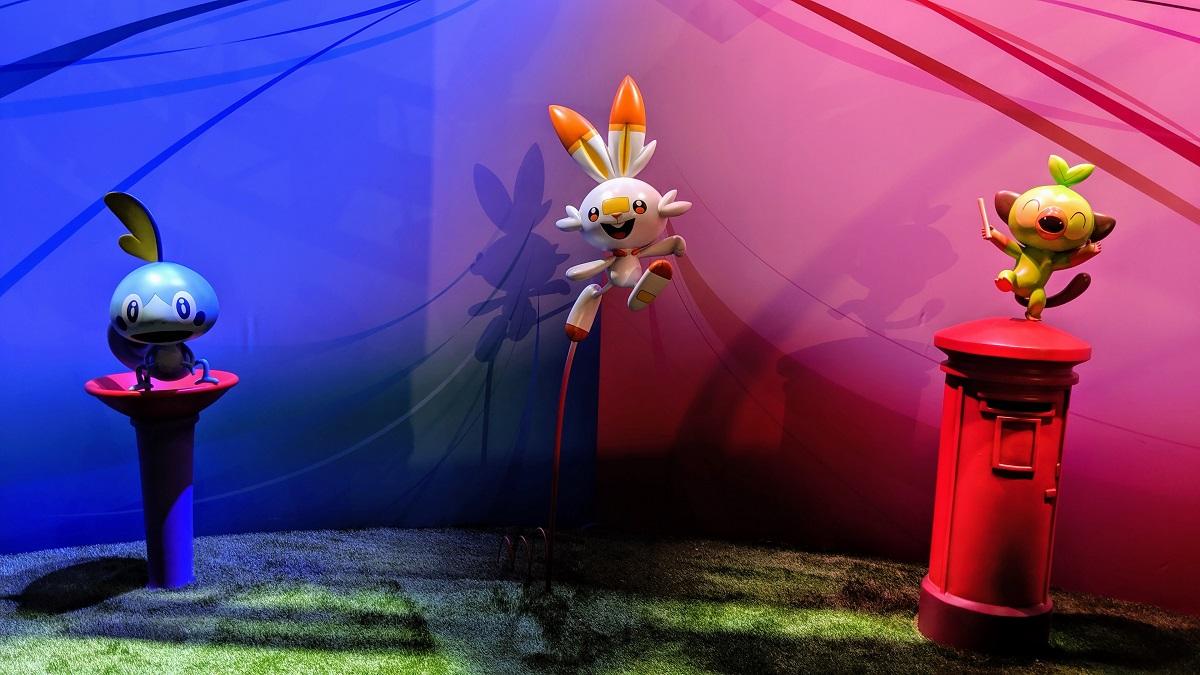 There might be some controversy about not being able to import old Pokémon once you finish the game, but we’re still very much excited about Sword and Shield.

It’s been a fairly long wait for the first proper new Pokémon game on Switch since the console launched, excluding Let’s Go as that’s effectively a remaster.

Apart from being compelled to make Sobble happy, the game looks decent with effectively more of the same action that we’ve all come to know and love but with new creatures and features. We’ve only played a gym but the new puzzle element to those and Dynamax are both big additions. There will also be raids and other fun stuff.

We’re also just looking forward to exploring the Galar region because it’s set in England and looks oh so quaint. 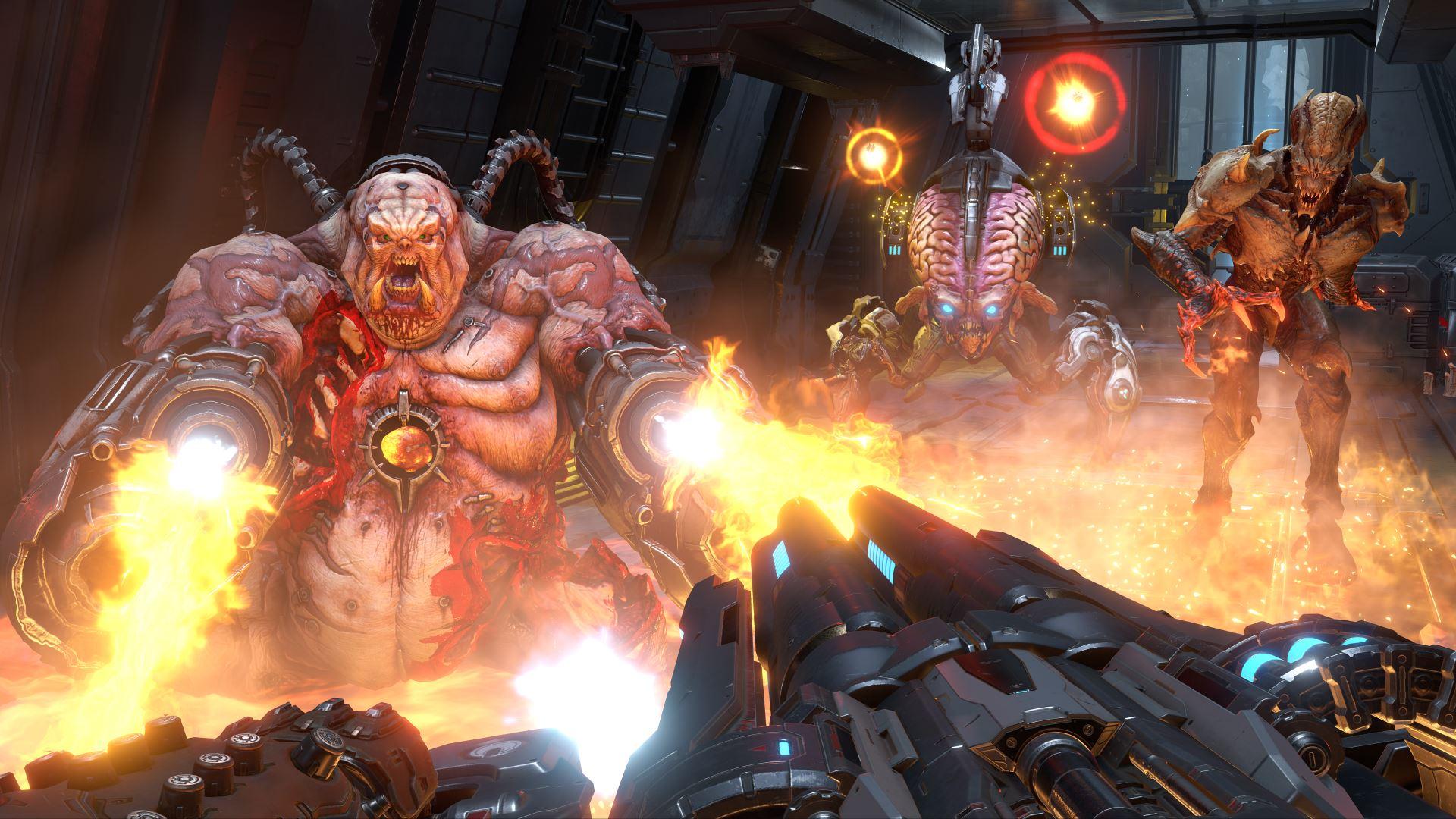 2016’s DOOM reboot was one of the most brutal and bonkers games of this console generation, and sequel DOOM Eternal looks to be all that, but more.

Developer id Software has wisely avoided going back to the drawing board. This is essentially more of the same – sometimes a bad thing, but not when the same is so damn good.

It’s as aggressive as ever, with more options for weapons, mods, and excessively violent ways to murder demons, all the while rewarding players willing to hurl caution to the wind and just keep charging forwards. Hopefully the final game finds the space to play with the formula a little more – not least in the new multiplayer mode announced at the show – but for now we’re very happy to simply go to Hell.

The Legend of Zelda: Link’s Awakening 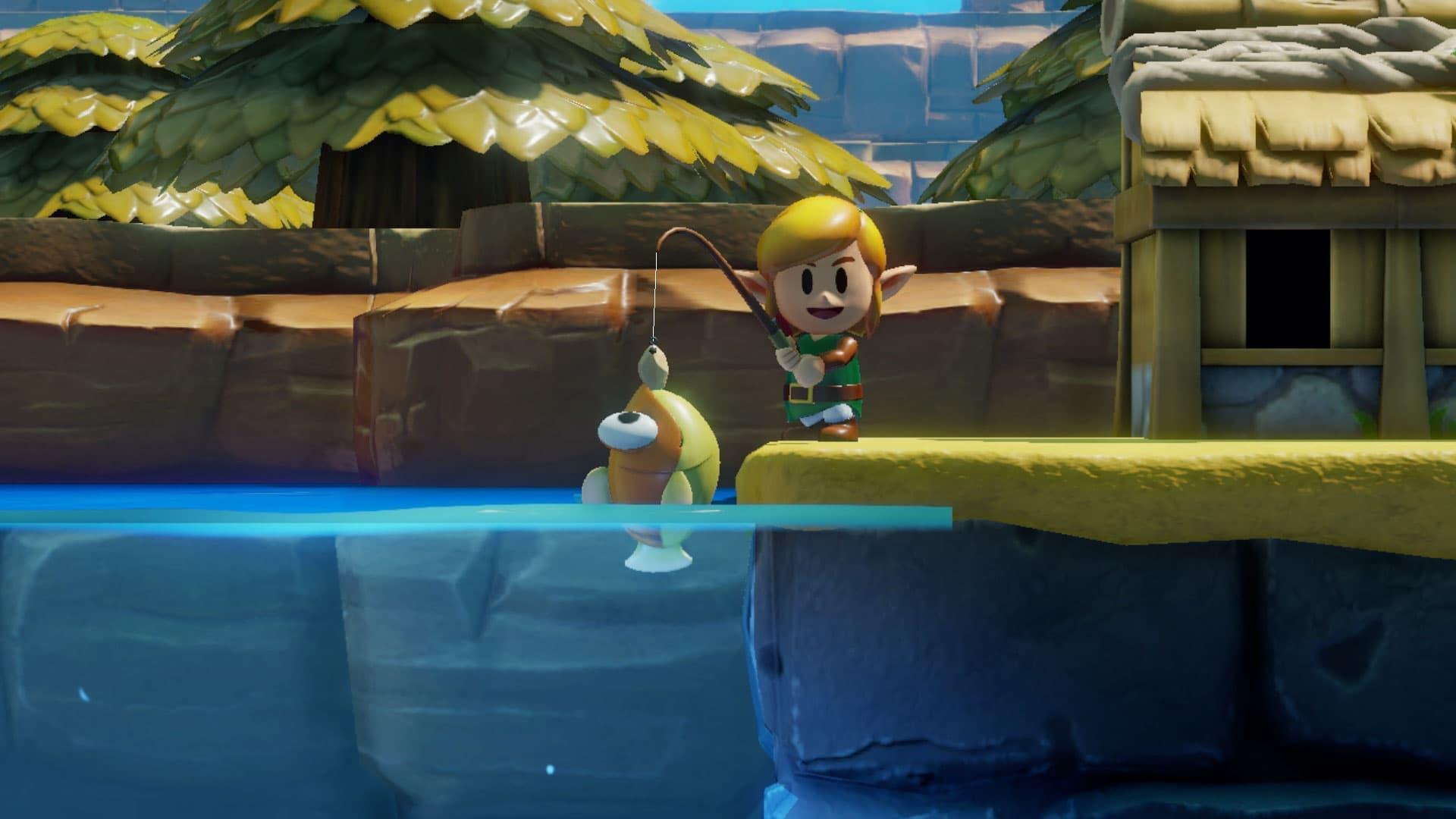 Nintendo is bringing Game Boy classic The Legend of Zelda: Link’s Awakening to the Switch, and it looks absolutely adorable.

The biggest change here is the brand-new art style, which pairs chibi character designs with a world that looks like a colourful children’s playset, with a sense of artifice and a plasticky sheen that invites you to play without ever robbing the lively characters of life.

The gameplay is essentially the same as its always been beyond some quality of life changes, though there is one major new addition: a customisable dungeon mode that lets you build maps out of rooms you’ve conquered in the game so far, giving yourself the chance to earn extra rewards if you can triumph over your own inventions.

Read our hands-on preview of the Link’s Awakening remake 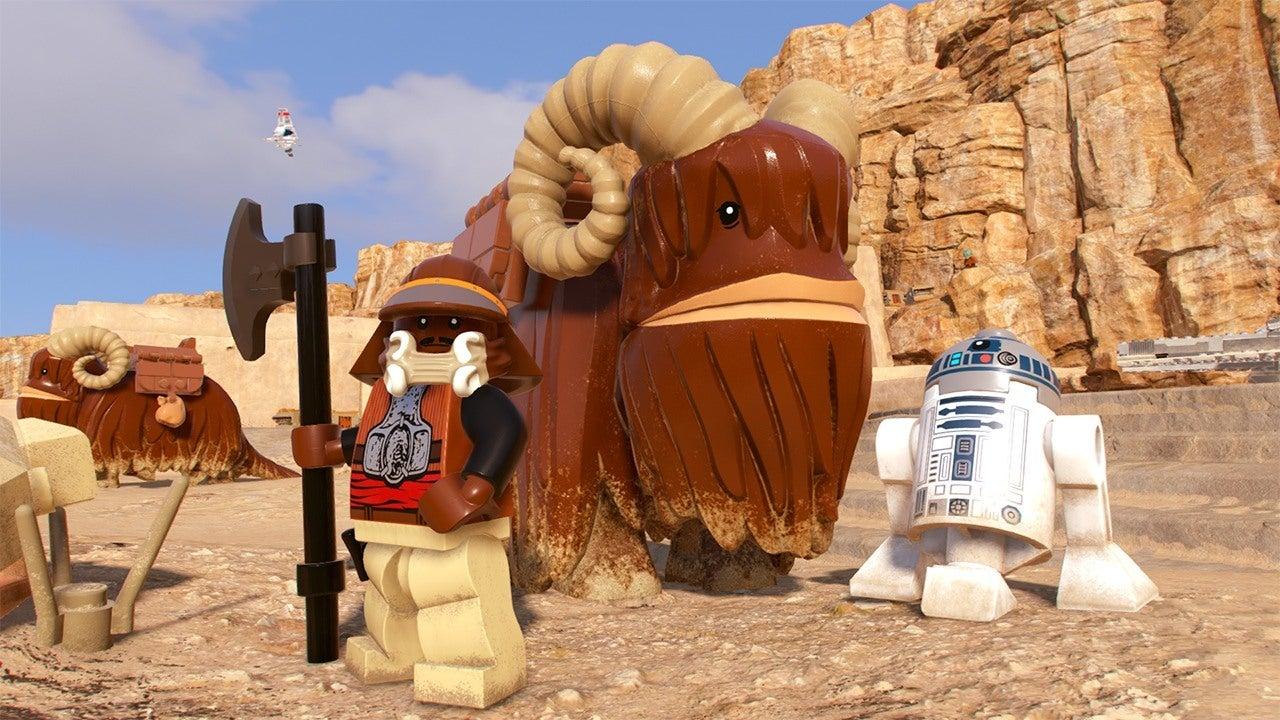 We’ve only had a hands-off demo of the game but boy are we impressed with what we saw. Enough to know that this isn’t just another Lego game from the same mould as the last decade or so.

The bits we’ve come to love about the Lego games is still there, namely the humour, but the game has been upgraded and refreshed from the ground up giving it a new lease of life.

You can play the episodes in any order you like and when you jump into any of them, you’ll enjoy the level of detail in the character (of which there are more than ever before) movement and the world itself – you’ll even get covered in sand. There’s also new combat which is much more complex than before. 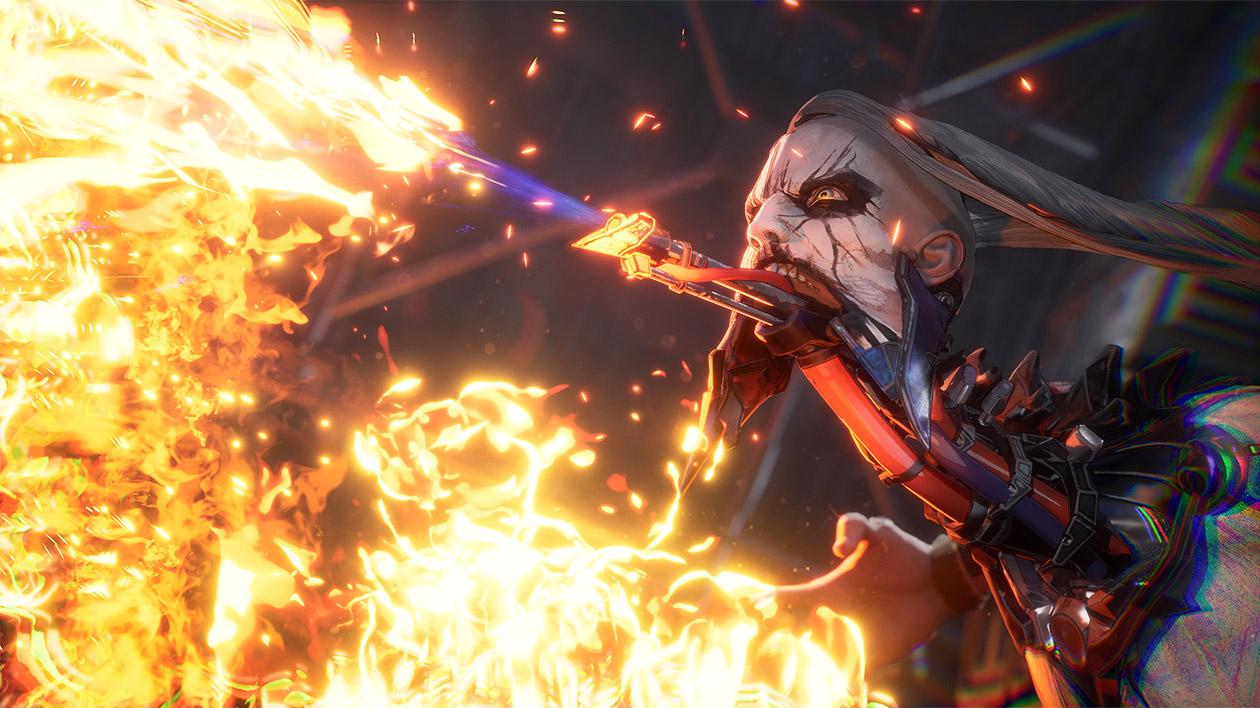 Take Overwatch, make it melee, and chuck everyone on a hoverboard and you have something a little like Bleeding Edge, the new game from Hellblade developer Ninja Theory.

The 4v4 online multiplayer has a roster of ten colourful characters split into three archetypes: Assassin, Support, and Heavy. Each archetype has different strengths, while each individual character has their own unique attacks and specials, meaning there’s actually a lot of diversity to the core gameplay.

We played a simple control point game mode for our demo, but tight balance and frenetic combat made it one of the clear winners of the show so far. It’s hard to say if the game will really be able to escape Overwatch’s shadow when it hits the market, but with a bit more polish to the core mechanics it should be more than good enough to stand (or hoverboard) in its own right. 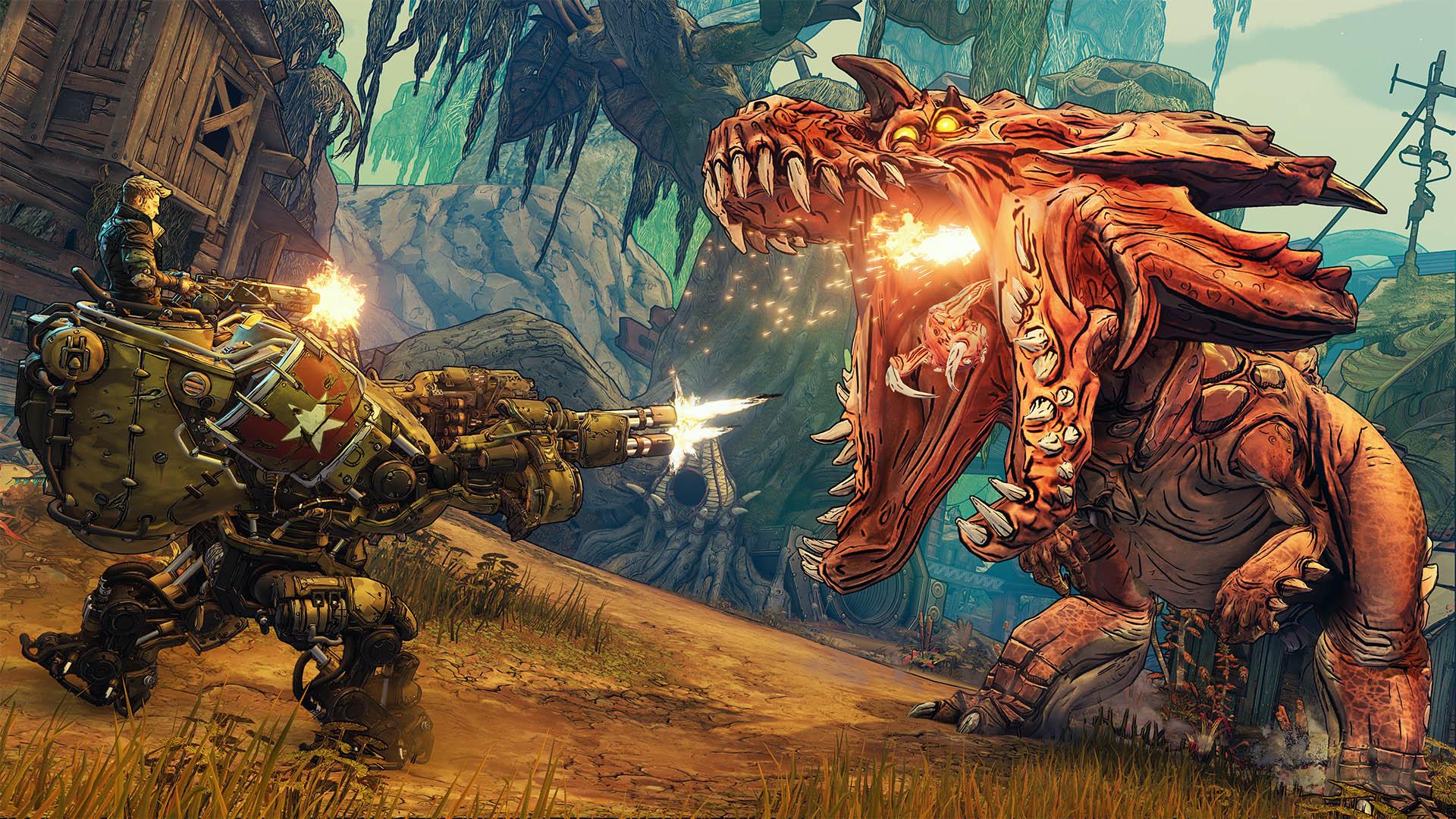 This might not be a huge change of direction or anything for the series, but there’s nothing wrong with Borderlands 3 being more of the same big a bold first person action.

It’s bigger and better with new social features and a tonne of additional customisation options including guns and characters. There are also new people to play as, new worlds to explore like Eden 6 and new enemies to hunt down.

If you’ve enjoyed the mayhem of the previous games then you’ll no doubt have fun is this new edition. 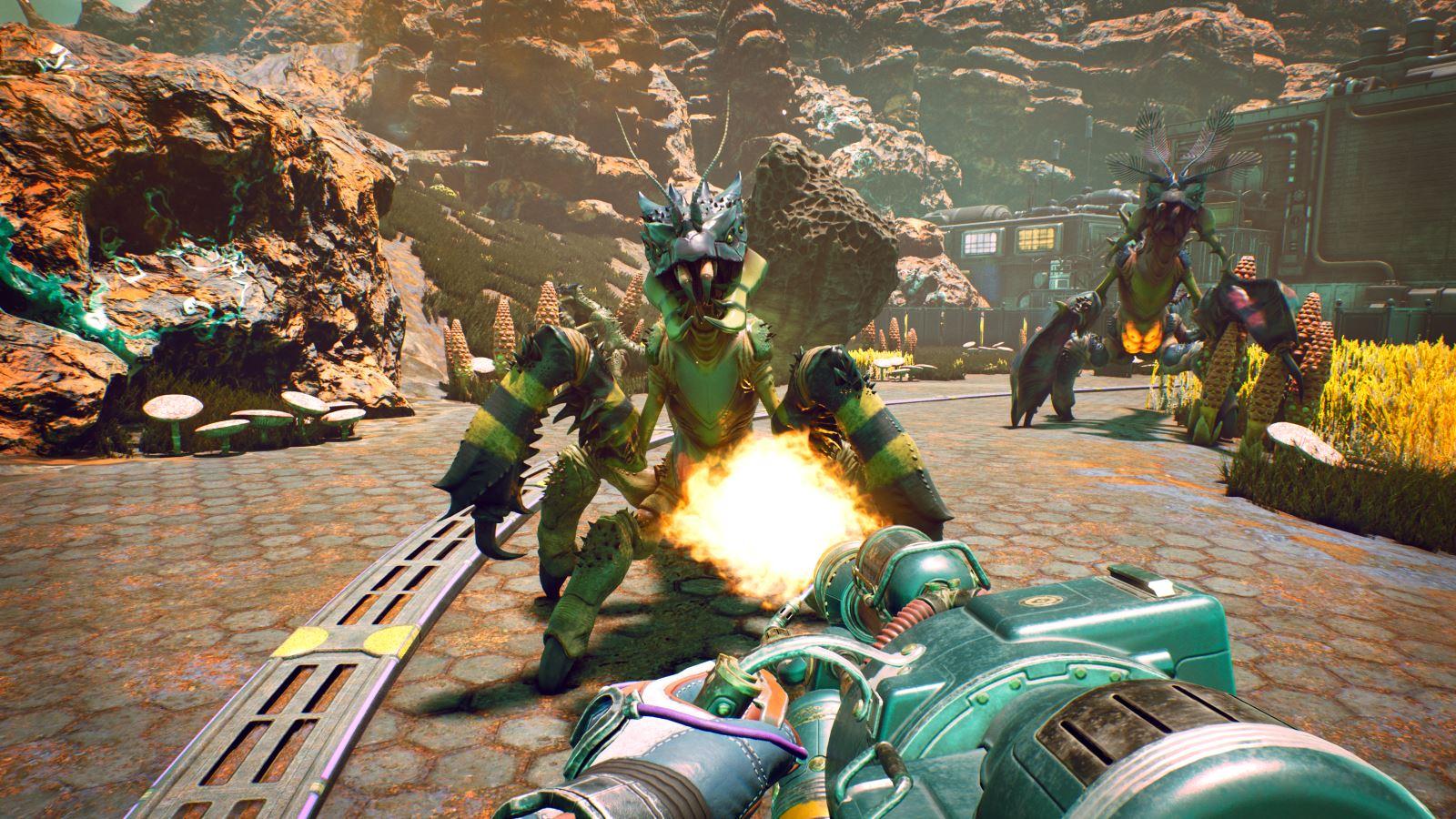 We didn’t get to actually play The Outer Worlds, but what we saw during a live developer playthrough looked seriously impressive.

This original title from Obsidian – developer of the spin-off game Fallout: New Vegas – clearly pays homage to that famous post-apocalyptic RPG series, but it’s its own beast. Set in a distant space colony, it ramps up the black comedy for a grisly, gnarly critique of corporate values and space capitalism.

The demo emphasised the choices players will have while playing, with just about every element of character progression impacting the available options at any given moment, and even ways to make combat more tactical or more intense and frenetic. Basically, you should get to play this game just about any way to you want – something almost every dev promises, but Obsidian might actually deliver.

Read our preview of The Outer Worlds 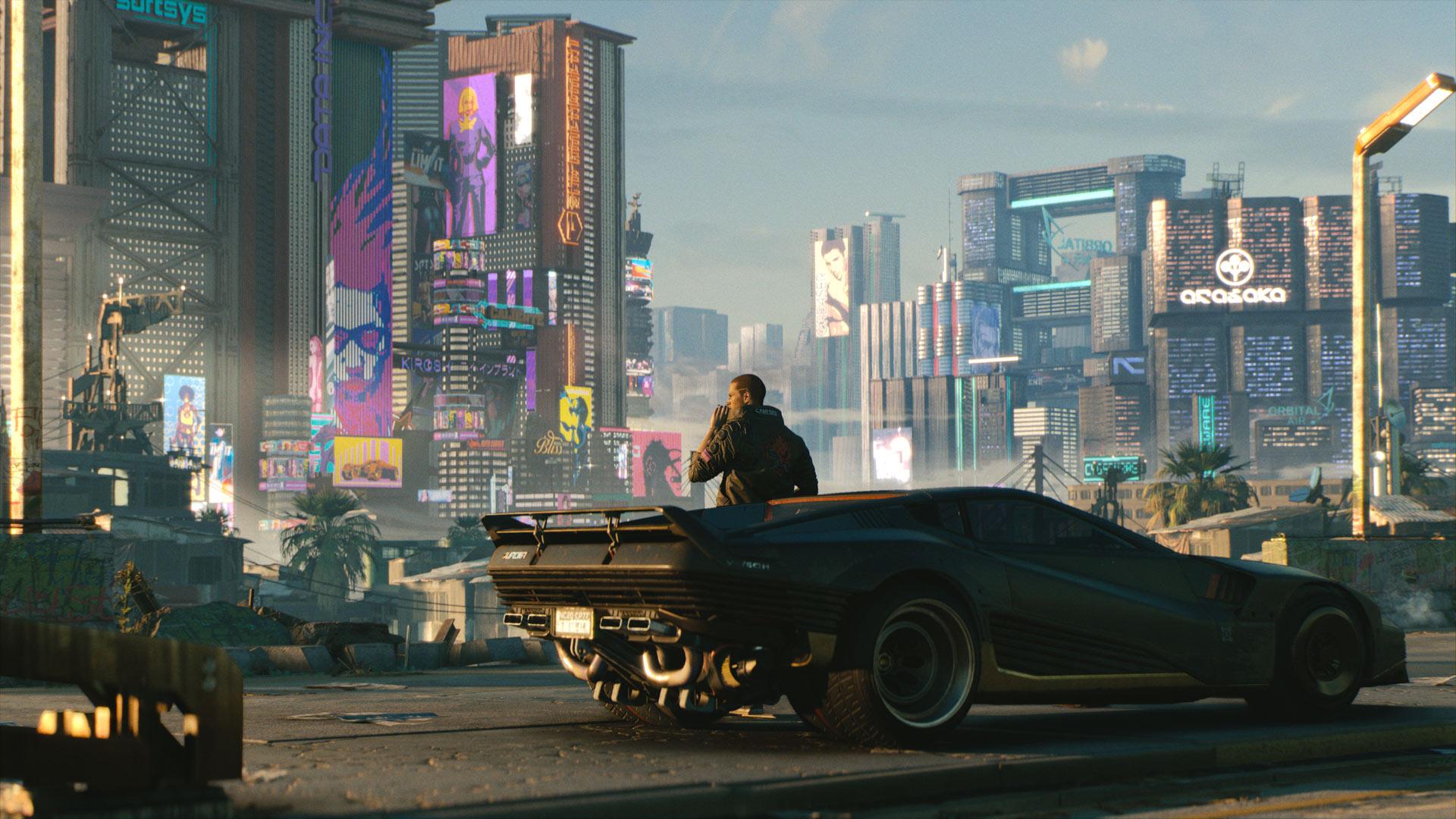 Cyberpunk 2077 was once again unplayable at E3 2019, but that doesn’t mean CD Projekt Red didn’t come to the show with big news. There was the April 2020 release date, for starters, but also the news that none other than Keanu Reeves would play a major role.

Besides that, the company showed off another mission in the game, highlighting not only the combat but also the varied possible approaches, switching between two character builds to highlight different mechanical and narrative approaches to the game.

Together with more hints of a story that leans into transhumanism and immortality, Cyberpunk 2077’s E3 presentation reaffirmed the polish and potential of the title, even if it didn’t highlight any radical new features that we hadn’t seen before. 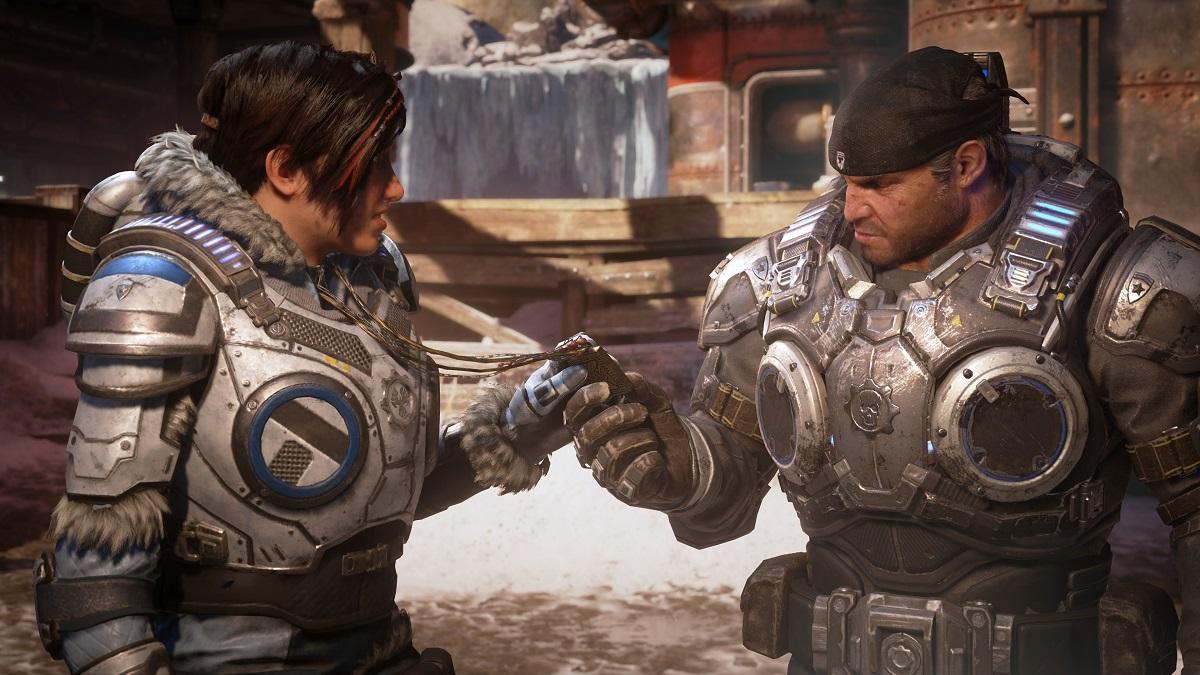 This isn’t some huge direction change for the franchise but we like the new Escape mode in Gears 5 which we played. This adds a new way of playing co-op which is so much more dynamic than simply standing in one place while mowing down waves of baddies.

Instead you start with almost nothing and there’s not much to pick up either. Every bullet and looted gun is precious and you’ll need to be tactical with your teammates, deciding who gets to pick up ammo and using your ultimate ability at the right time.

Those ultimates might be pretty similar to other games – *cough* Overwatch *cough* – but it’s still a nice addition to the game. 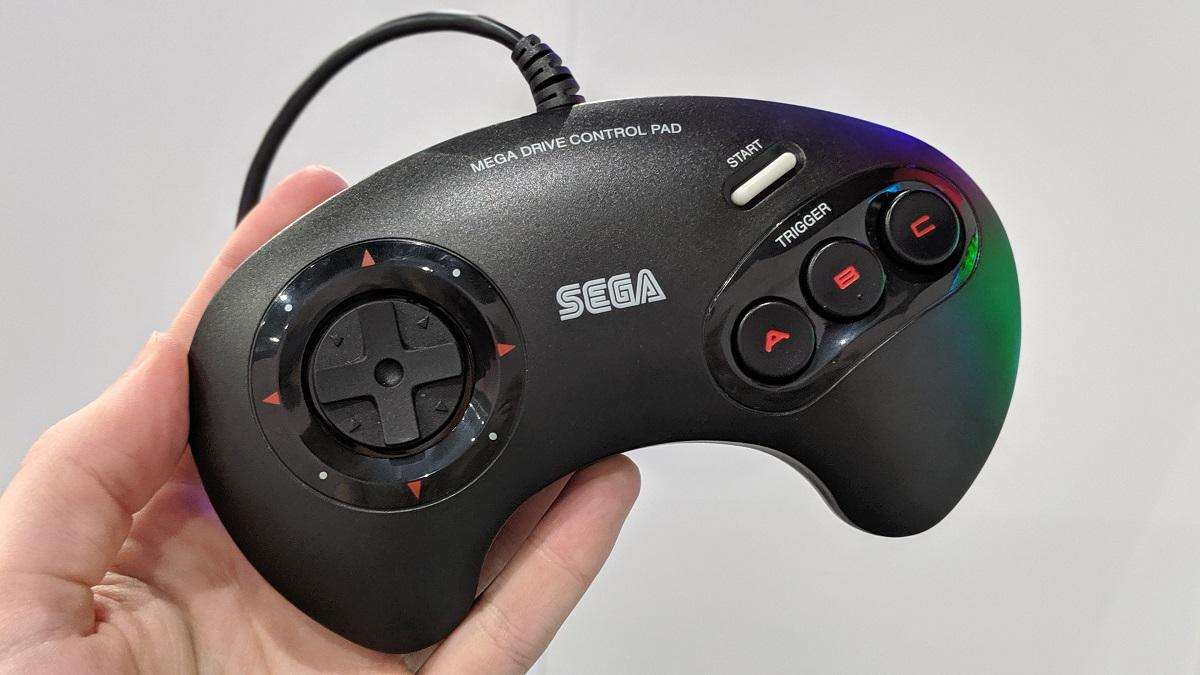 Unless you’re a Sega hater, there’s really nothing to dislike about the Mega Drive Mini. There’s not much new hardware art E3 this year but even if there was, this would have made the cut.

With a similar approach to Nintendo, the Mega Drive Mini – or Genesis for any US readers – has everything its needs to be successful.

We’re talking about the palm-size replica console, complete with tiny cute cartridge flaps, true to the original controllers and a lot of great games. If you’re like us, there will be a nice mix of games you remember fondly and some you never got round to trying.

All of this for a great price makes the Mega Drive Mini something of a no-brainer. 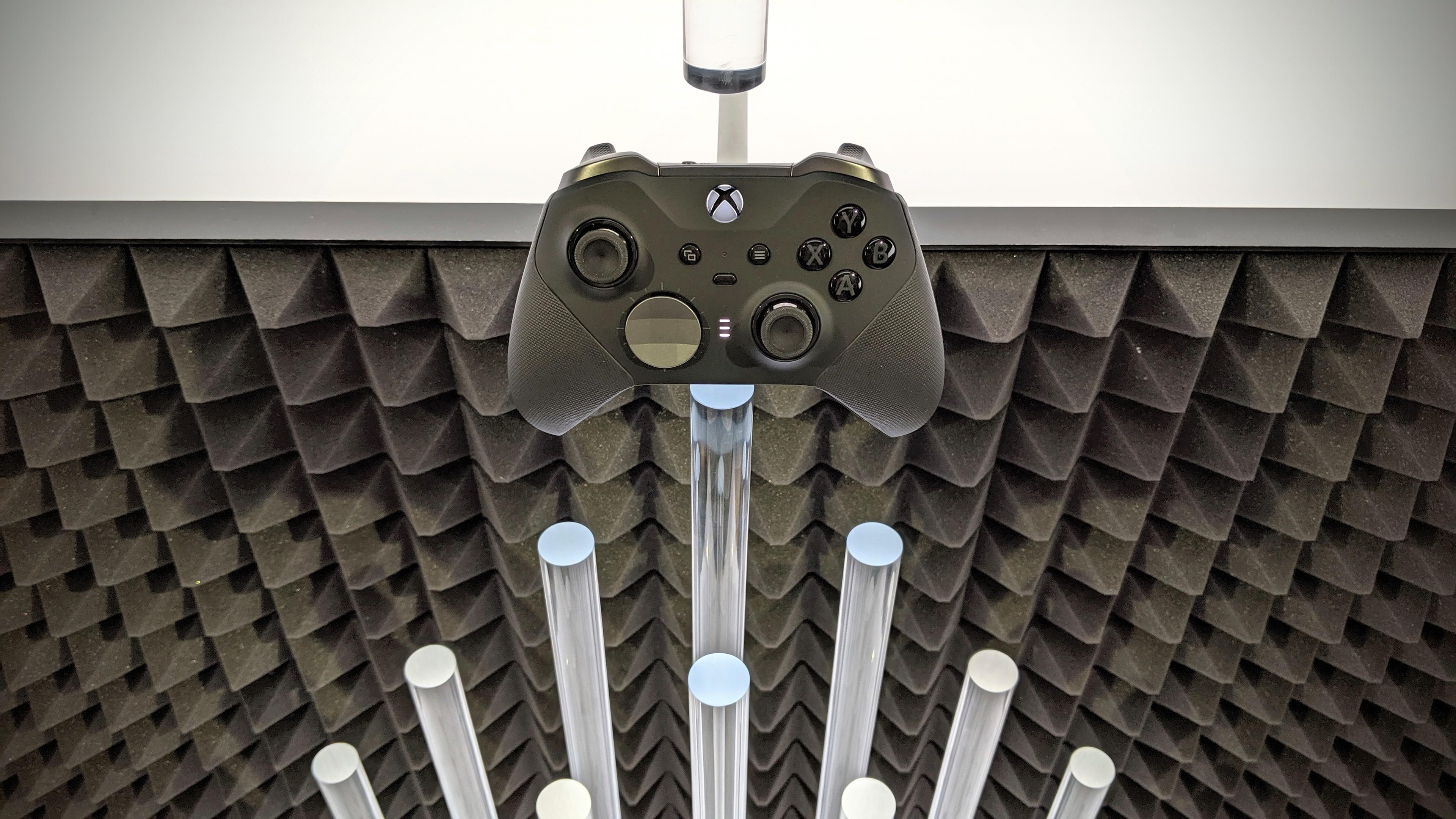 The first Xbox Elite controller was probably the best gamepad in the world when it came out. Competition from the likes of Scuf, Nacon, and Razer has since closed the gap though, so it’s about time Microsoft came out swinging.

The Elite Series 2 doesn’t have any single giant selling point over the original, but instead it’s got upgrades all over: adjustable thumbstick tension, redesigned grips, a shorter hair trigger setting, more software settings, three customisable profiles, 40-hour battery, USB-C charging, a charging dock in the travel case… we could go on.

There’ll be a small price hike when the controller hits the market in November, but on the strength of what we’ve seen so far, it’ll probably be worth it. Microsoft may just have wrestled back the controller crown.

Watch our hands-on video from the show floor 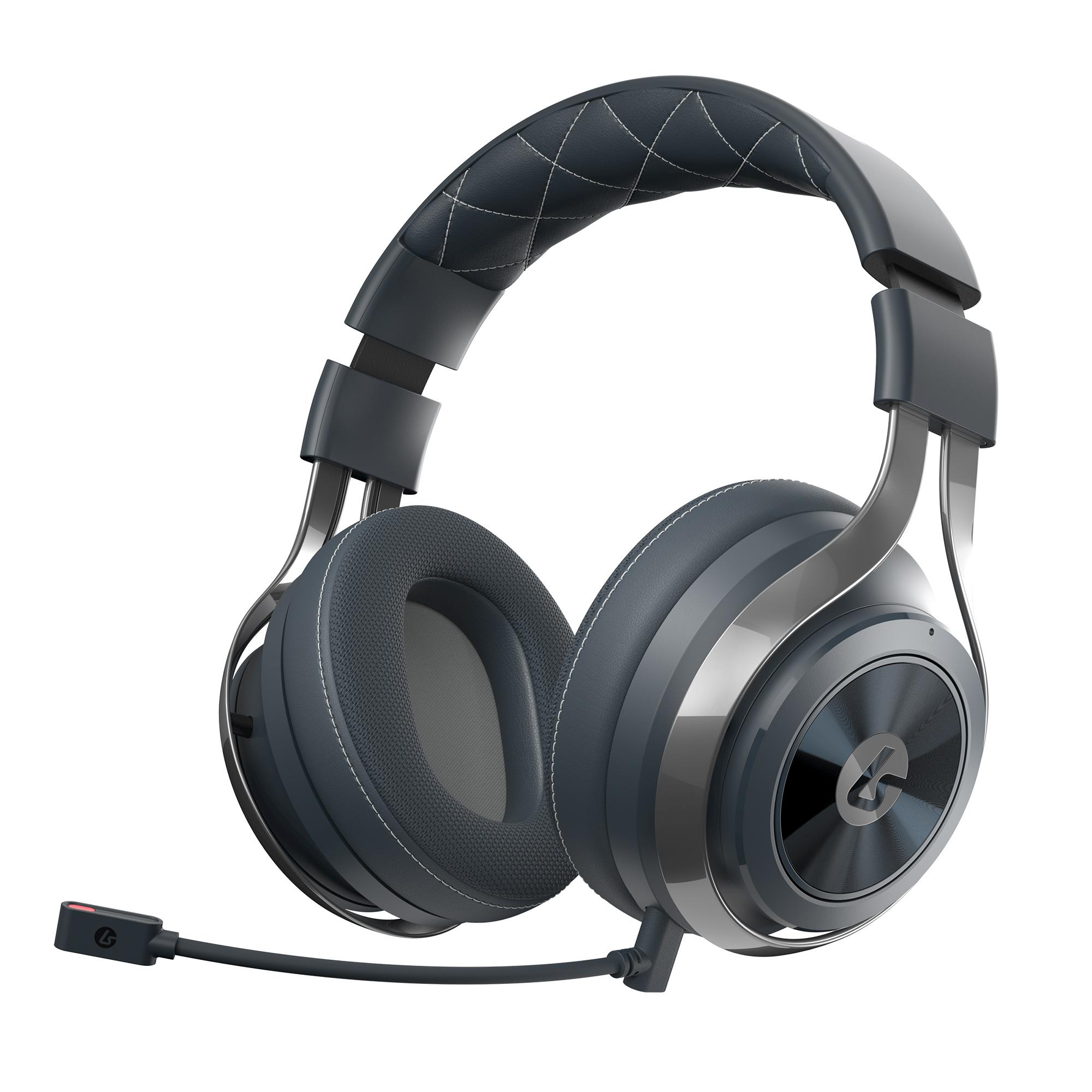 This new top-of-the-range headset from LucidSound is also a pair of headphones you can take with you anywhere. These are stylish, comfortable and are packed full of features. We particularly like the cooling gel layer on top of the memory foam.

A neat trick is that these have two forms of wireless so you can connect them, for example, to your console and phone simultaneously. The controls on the earcups change depending on what device you’re using.

They also come in a Snoop Dogg edition with the man himself speaking the prompts into your ears. 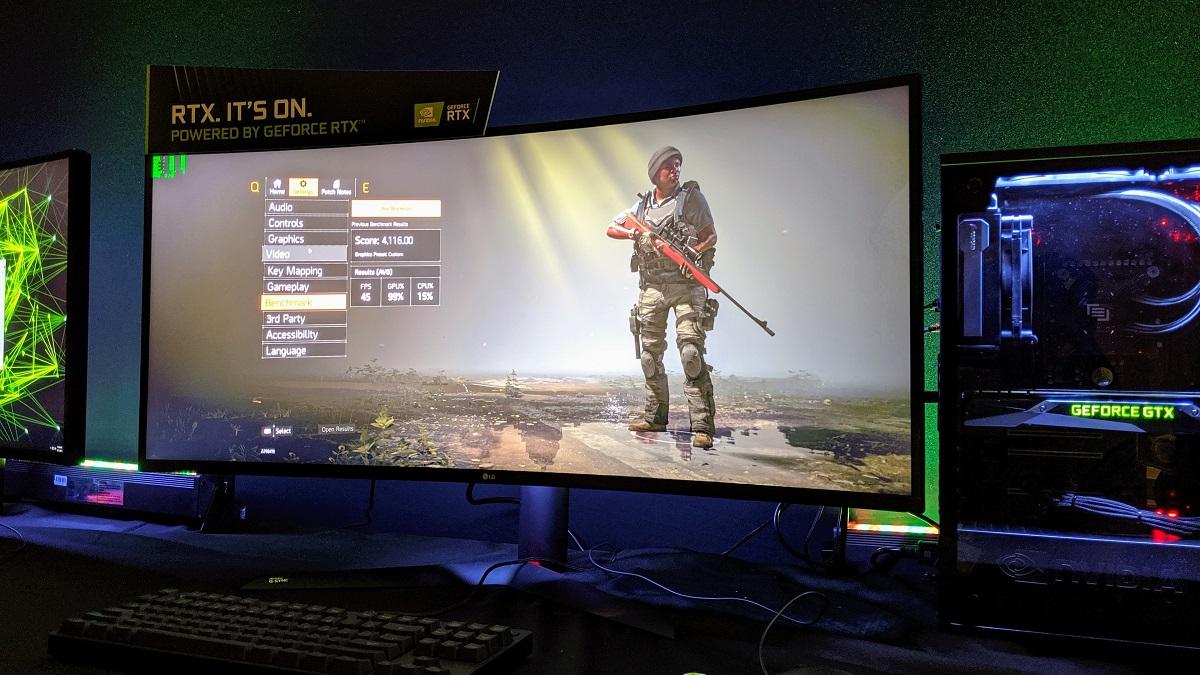 Hardware might be a bit sparce at E3 this year but we’re pretty impressed with this new curved gaming monitor from LG (apologies for the dark photo).

This is the world’s first with a somewhat ridiculous 1ms response time, making this very tempting for gamers looking for a fast monitor. It’s available in 27- and 38in sizes with up to 3840 x 1600 when it comes to resolution.

The Nano IPS panel has a long list of tasty specs and features including the ability to overclock from 144- to 175Hz. It’s also got Nvidia G-Sync, a 21:9 aspect ratio and a wide color gamut of 98% DCI-P3.

It will be available from 1 July.