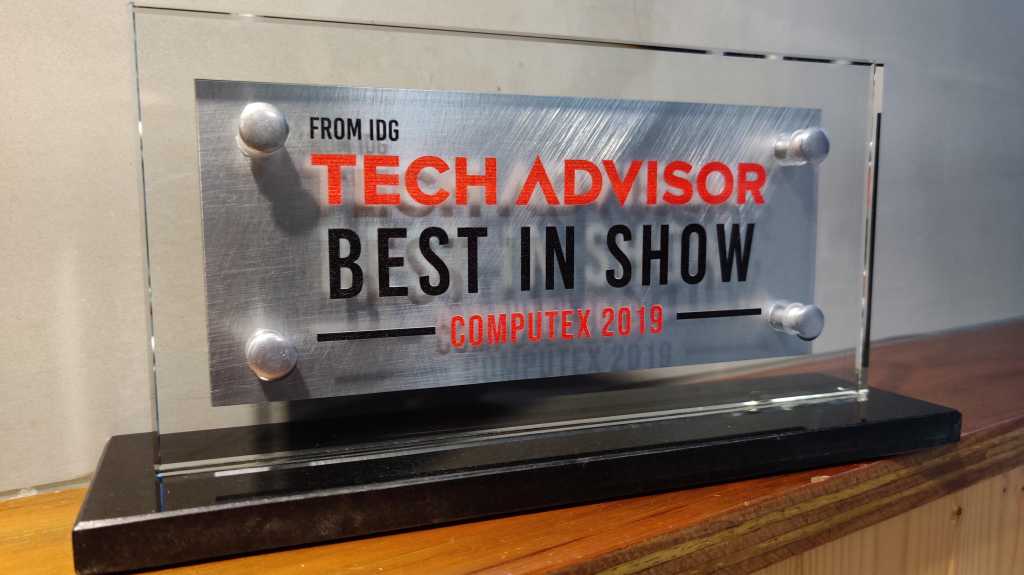 When it comes to computers and components, Computex is one of the biggest tradeshows in the calendar, and this year proved that more than ever, with major chip and hardware announcements from AMD, Qualcomm, Dell, and more.

We’ve been out in Taipei for Computex 2019 to cover the major announcements, including the world’s first 5G PC, the launch of new flagship CPUs and GPUs from AMD, and a bevy of new laptops, desktops, components, and peripherals to match. Here’s the best that Tech Advisor has seen at the show so far – which we’ll keep updating throughout the week as we go.

When designing its latest laptop, Asus apparently took one look at the MacBook Pro Touch Bar and then asked Apple to hold its beer.

Nevermind a small LCD strip, the ZenBook Pro Duo has a full 14in 4K touchscreen built into the body of the laptop, which you can use to display up to three apps at once, set up custom touch controls, or just let your main software spill down for more vertical real estate.

Yeah, it leaves the keyboard a little squashed and pushes the touchpad to one side (though it still gets a fancy built-in LCD NumPad) but for the most part Asus has made good use of the space, and managed to pack in a few ports too, while keeping the whole thing slick and small.

It won’t be for everyone, but if you’re used to using multiple monitors or multi-tasking constantly, the Pro Duo (or it’s smaller ZenBook Duo sibling) could be a winner.

Read our review of the ZenBook Pro Duo from the show

It’s rare to get really excited about a keyboard – even the best ones tend to be little more than minor tweaks to a formula we’ve really had around for a while. Not so much with the Apex Pro.

The flagship of SteelSeries’ new gaming keyboard lineup – available in full-size or tenkeyless variants – is a pretty standard RGB mechanical keyboard, with all the flourishes you’d expect from the company, and one killer feature: fully adjustable key actuation.

Every single key on the board can be set to an actuation point anywhere between 0.4mm and 3.6mm – essentially the gap between a keypress registering when you gently brush your finger against the key, or when you hammer down to the bottom.

You can use the controls on the board to adjust the sensitivity of the whole keyboard at once, or use the included software to customise individual keys – giving yourself ultra-fast strafing in Overwatch while using a heavier press for your special to avoid setting it off by mistake. Naturally you can save various presets, and even set them to kick in automatically when you open specific games or apps.

The regular XPS 13 usually sits at the top of our best laptop chart, but we’ve not always had as much love for its convertible counterpart.

That’s changed with the 2019 redesign, which brings the best design tweaks from the core XPS line (including that tiny webcam above the screen where it belongs) and backs it up with the 2-in-1 form factor.

There are small touches to make the most of the functionality too, like a 16:10 aspect ratio to the display (HDR & 4K, naturally) and an upgraded version of the MagLev keyboard. And we haven’t even mentioned that it’s one of the first laptops in the world to run on Intel’s new 10th gen Ice Lake 10nm processors.

There’s a lot to love here, both inside and out, and for the first time that feels like a convertible that’s every bit as good as its clamshell cousin.

It may suffer from a very forgettable alphanumeric soup of a name, but this gaming monitor from MSI is actually pretty special. First teased at CES as having ‘AI features’, the company used Computex to finally reveal what exactly that means – and it’s cool.

Thanks to a small camera embedded below the display, the monitor can, well, monitor its surroundings. Firstly, facial recognition software means it can tell who’s using it and automatically adjust to that user’s preferred settings – contrast, brightness, etc.

That’s ideal for anyone who shares their monitor with friends or family, but the AI will help even if you’re flying solo: it’ll detect light levels in your room and in turn adjust brightness to suit. Then there’s the Night Vision mode, which when activated will automatically brighten the darkest areas of the image – and only those areas – to improve visibility for games, movies, or TV that’s just too dark to see clearly.

Beyond that, it’s a great display in its own right: 34in, curved, 3440 x 1440, with 144Hz refresh and 1ms response rate, 3,000:1 contrast ratio, and 400 nits max brightness. Throw in RGB lighting, a full suite of ports, and an included mouse bungee and webcam mount, and the result is one of the most comprehensive monitor packages we’ve seen at Computex.

Read our full preview from the show floor

When Alienware unveiled the mammoth Area 51m at CES in January, it brought with it a whole new design language to the brand.

With the new 2019 m15 and m17 models, that Legend design is now available in laptops that are more portable, more affordable, and generally more desirable to the average gamer.

With top internal specs (i9, RTX 2080, up to 4TB storage) it’s got more than enough power to match the new duds, with dynamic overclocking & voltage regulation to let it run even harder – and better cooling to help it cope.

The keyboard and trackpad have been overhauled, and the display comes with loads of high refresh rate options and even optional OLED, Tobii eye-tracking, and EyeSafe tech.

Competition in the gaming laptop market has been intensifying every year, but with these new models Alienware is finally reminding us just why it became the market leader way back when – and why it might deserve to retain that title.