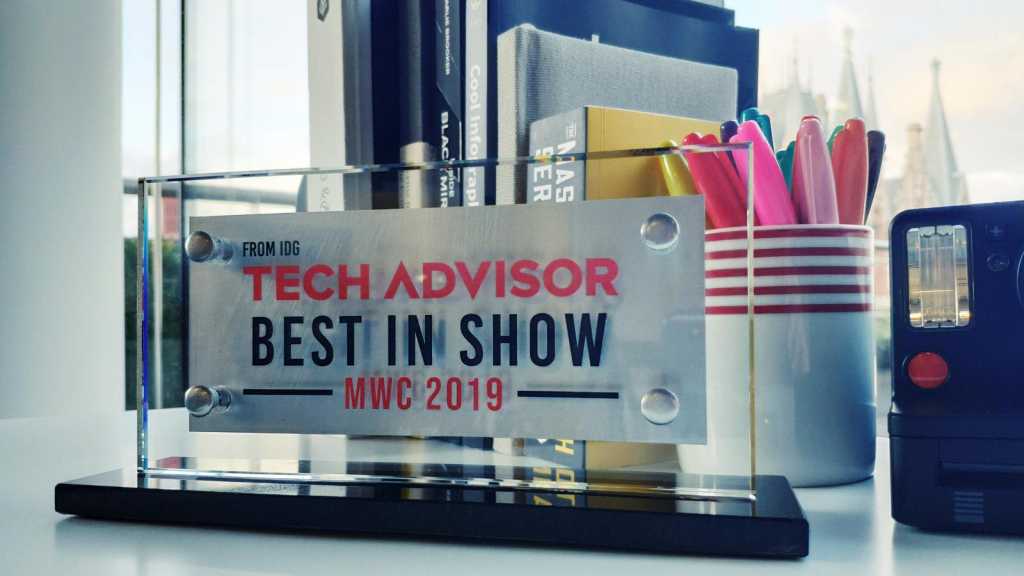 Mobile World Congress 2019 is now well underway, and our team of tech journalists is on the ground to bring you the latest product news from all the biggest manufacturers at the show.

With thousands of new products at the event, we’ve given them a tough challenge: to figure out which are the very best on show.

Here are the companies and devices that caught the Tech Advisor team’s attention:

The 10th in Samsung’s flagship S-series, it’s no surprise to find the Galaxy S10 on our list of MWC ‘Best in Show’ award winners. Though it was announced ahead of MWC in a separate Unpacked event, Samsung has a booth at the show offering hands-ons of its best phone to date ( you can read ours right here).

Now with three camera lenses at the rear and a fingerprint sensor built right into the simply breathtaking Dynamic AMOLED Infinity-O display, Samsung has made many wise design choices for its 2019 flagship.

It’s faster than ever in general processing, graphics and – soon – connectivity too, with a 5G version on the way.

Pre-order ahead of the 8 March release date and you’ll also get a free pair of Galaxy Buds, Samsung’s brand-new wireless earbuds.

Huawei isn’t the only company at MWC 2019 to announce a foldable phone, but it is the only one to steal the attention of the entire Tech Advisor team with its award-winning Mate X ( reviewed here).

This thing is an absolute beauty be behold, with a giant and almost bezel-less 8in display that folds out rather than -in to form a regular 6.6in-screen smartphone. It’s more expensive than Samsung’s Galaxy Fold at €2,299 (with 8GB RAM and 512GB storage), but it’s also a better attempt at the foldable format.

There’s a genius implementation of the camera on a bar module that you hold at one end, and other breakthroughs such as incredibly fast 55W charging, taking the Mate X from 0- to 85% in just 30 minutes.

The Mate X will be available in mid-2019 – more details here.

Xiaomi offers a seemingly impossible deal with its Mi 9: the height of performance, gorgeous design, awesome photography and forward-facing tech at an incredible sub-£500 price. The company has stolen our hearts with its incredible-value Mi 9, making it a natural winner of our ‘Best in Show’ award.

If it’s not already obvious why we love Mi 9 you should check out our hands-on review.

The company that managed to squeeze the world’s first 4K HDR OLED screen on to a smartphone is surely deserving of another of our coveted Tech Advisor ‘Best in Show’ awards.

This is the Xperia 1, Sony’s latest flagship phone and the successor to the Xperia XZ3. With a huge 6.5in screen and a tall 21:9 aspect ratio it has a towering but overall tempting design.

With a triple-lens camera and 2019’s processor of choice, the Snapdragon 855, Sony is making big strides in its journey to the top.

Find out what we love about the Xperia 1 in our hands-on review.

Register your interest in Xperia 1.

The G8 ThinQ is one of two new flagship phones announced by LG at this year’s MWC, but only one can take home our Tech Advisor ‘Best in Show’ award.

Compact, colourful, and just as powerful as the V50, the G8 should boast better battery life and features the brilliantly bonkers Hand ID and Air Motion controls. It’s probably going to be a lot cheaper too.

Check out our hands-on review and learn more about availability.

This is the next step in Microsoft’s mixed-reality journey. Hololens 2 looks to be an incredible piece of kit, and worthy of another of our ‘Best in Show’ awards.

Still business-focused, the new Hololens offers more immersion, better comfort over long periods and industry-leading value out of the box. There’s also more than two times the field of view of its predecessor.

Register your interest in Hololens 2 now, and keep up to date on availability. The Hololens 2 is expected to ship later in 2019.

A 14in portable display that connects to your laptop over USB-C to provide a second screen, Lenovo’s ThinkVision M14 ticks boxes for convenience, productivity and functionality.

There are two USB-C ports on the side, but a single input can accept power and video at once, allowing you to work remotely even when that means being away from mains power.

If that doesn’t scream Tech Advisor ‘Best in Show’ award winner we don’t know what does.

We’ll be bringing you our hands-on review soon.

Huawei scoops its second Tech Advisor ‘Best in Show’ award for its MateBook 14, which impressed us with its careful balance of price, design and specifications.

Combining longer battery life than the MateBook X Pro with many of the same specifications, the MateBook 14 is well worth a look as an alternative to a MacBook or other Windows laptops.

Here’s our hands-on review of the MateBook 14.

Smile, Oral-B. You’ve just won a Tech Advisor ‘Best in Show’ at MWC 2019 award with a seriously smart toothbrush that will have its users desperate to show off their pearly whites.

The Oral-B GeniusX uses AI learning to ensure effective cleaning. It’ll help you to brush for just the right amount of time with the correct amount of pressure.

It also comes with a cool case that not only protects the toothbrush on your travels but can charge both it and another USB device.

You can’t buy the GeniusX until September 2019, but it will be worth the wait. Here’s our hands-on review.