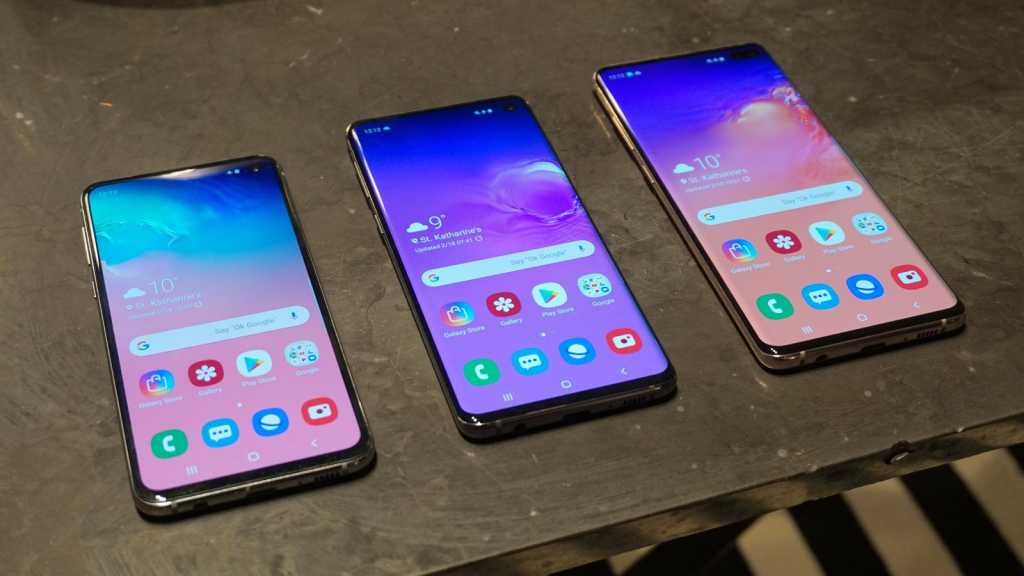 Samsung has launched extra models in its flagship Galaxy S range for 2019 which means there are three rather than two S10 phones to choose between. In fact, there’s a fourth, a 5G model which will launch later in the summer.

Before we delve into the phones, here’s a handy table which gives you a quick overview of the specs.

Now let’s look at the three phones in turn.

The S10e is a smaller, cut-down offering and the newcomer to the range. Given the price, Samsung is pitching this particular model at the iPhone XR, we’d say.

For anyone who detests the current trend for massive phones – we used to call them phablets – then this new model might be a refreshing sight. You might also appreciate the range of colours on offer, including Canary Yellow as well as Prism Green. You can also have it in white or black.

Its screen is the same size as the iPhone X and the svelte bezels make its dimensions slightly smaller in height and width. It’s a fair bit lighter at 150g (versus 174g) so it should be a great choice if you’re after a phone that actually fits in your hand – and your pocket.

However, there are compromises. While it has the same processor as the more expensive two models, it doesn’t have the telephoto camera. But it still has two cameras – one more than the S9 – so you can shoot landscapes with the ultra-wide camera (the first time we’ve seen this lens on a Galaxy S-series phone). It has a 123-degree field of view, roughly the same as the human eye.

The main 12Mp camera retains the dual-aperture feature from before, so can switch between f/1.5 and f/2.4 depending on available light. Now, though, you can shoot 4K video in HDR10+, and the extra colours can be seen on the HDR10+ screen.

The other difference is a traditional fingerprint sensor instead of the one embedded into the screens of the S10 and S10 Plus. Ultimately, though, that may not be a big deal for a lot of people.

Finally, there’s the storage, which is 128GB or 256GB. Again, this should be enough for most people and you can expand that using a microSD card.

The good news is that all three phones are IP68 water resistant and still have standard 3.5mm headphone jacks.

Plus, they also have the latest 802.11ax Wi-Fi and Bluetooth 5. Fitness enthusiasts may appreciate the Ant+ compatibility, too.

Read our hands-on review of the Galaxy S10e.

In terms of styling, the S10 looks more like the S10e than the Plus, and that’s because they both have a single selfie camera. This is the new-style ‘punch hole’ camera that’s so named because it looks like a hole has been punched in the screen, and the display encircles it.

It’s in the top-right corner which means the Android icons, including the battery, have to be pushed to the left.The default wallpaper aims to hide the camera and does a pretty good job.

Whether you like the asymmetrical design or not, with those tiny bezels it means virtually the entire front is screen – an impressive 93.1% screen-to-body ratio.

Quite obviously, it’s larger than the S10e with a 6.1in screen. Battery capacity increases too, but only by 300mAh. The screen is, just as you’d expect, AMOLED but Samsung is claiming a world first for phones as it supports HDR 10+. This is the same enhanced HDR standard some of its TVs use and it peaks at 1200 nits, the same as the Galaxy Note 8’s screen.

Samsung has integrated the fingerprint scanner into the screen and – unlike the versions you’ll find on the Huawei Mate 20 Pro and OnePlus 6T – it’s ultrasonic so it shouldn’t be affected by water (think rain, not underwater) and can’t be fooled by a 2D image of a fingerprint.

It’s the first time we’ve seen three cameras on a flagship Galaxy phone: it adds a 2x telephoto lens to the pair you’ll find on the 10e.

A nifty feature, or at least it will be for your friends, is PowerShare. This works like reverse wireless charging on the Mate 20 Pro and turns the S10’s back into a wireless charger which works with any phone that supports the Qi standard, including iPhones.

The feature still works while the S10 is charging its own battery from the mains, the theory being that you need to take only one charger with you when travelling with two phones.

The headliner of the range – at least until the even bigger 6.7in 5G version appears – is the S10 Plus. This has the same set of features as the S10 but with a larger 6.4in screen, a bigger capacity battery and yet another camera on top of the S10’s quartet.

In case you’re wondering what Dynamic AMOLED is all about, it’s partly the HDR10+ support, but also encompasses dynamic tone mapping as well as the higher contrast ratio and better colour accuracy at higher brightness levels, which means you still see accurate colours even outside in sunny conditions.

It’s a second front-facing camera, and is there for depth sensing so you get better portrait selfies.

As you’ve probably noticed in the table, the Plus is offered with an astonishing 1TB of storage and 12GB of RAM. This is the Ultimate Performance edition, but it’s also available with a still impressive 8GB of RAM and 512GB of storage. These have a ceramic back in either black or white.

Features which are common to all three phones include Gigabit LTE, Wi-Fi 6 (the latest standard), stereo speakers, Dolby Atmos for gaming and cool-sounding vapor chamber cooling which will hopefully ensure there’s no performance throttling, so you can use the chipset’s full power even on those extended sessions.

Read our review of the Galaxy S10 Plus.