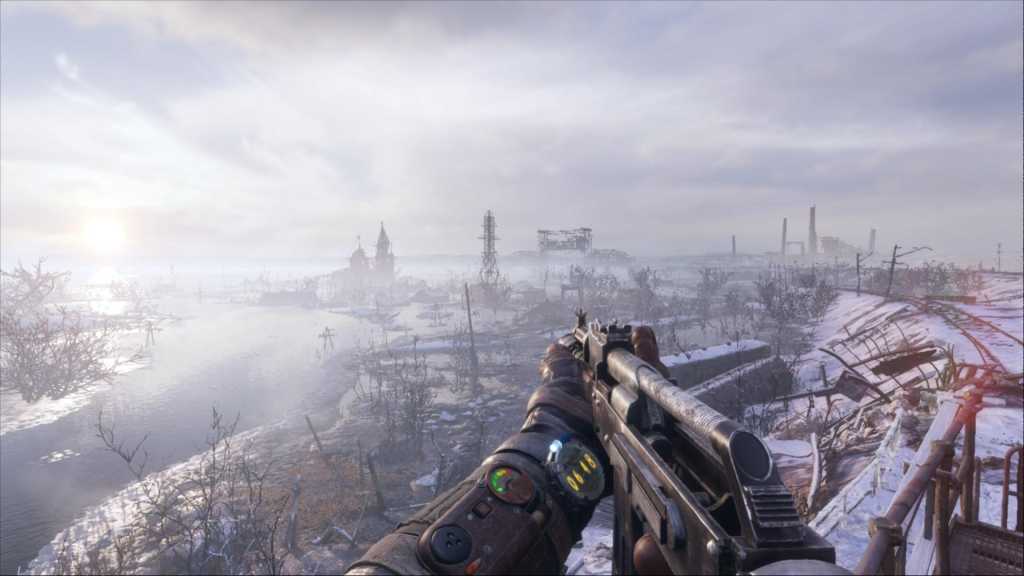 Metro Exodus is the first in the series to take Artyom and the Spartan Rangers out of the dark tunnels of the Mosco Metro system and into irradiated Russia, providing a handful of open world environments across all four seasons to explore. Exploring the surface provides a range of new experiences and encounters for players, and there are a number of series firsts (including drivable vehicles and on-the-go craftable filters) so players new and old will find the game exciting and challenging.

There’s an emphasis on challenging, as the game is rather punishing – take a look at our Metro Exodus review to see what we mean. You can’t go all-guns-blazing into a bandit camp or you’ll end up dead. Quickly. Instead, you have to use observation, stealth and skill to overcome your enemy and explore the deadly open world environments the game offers.

While it might be daunting, we’ve got you covered; we’ve played a lot of Metro Exodus, and here are our top tips and tricks to become the ultimate post-apocalyptic explorer.

While the radioactive landscape is full of danger from both bandits and mutated animals, it’s also full of wonderful goodies to help you on your post-apocalyptic quest.

As you progress through the game, various “?” icons will appear on the map. While it’s tempting to power through the engaging campaign, we’d advise taking the time to fully explore the icons that appear on your map. Investigating places of interest can yield great rewards, from new weapons like the high-powered Bulldog rifle and Rail Gun to new mods and suit upgrades that’ll have a significant impact on gameplay.

Always carry a variety of weapons

The level of customisation available in Metro Exodus’ weapon system is impressive, allowing you to take the same base weapon (like the rifle) and create two entirely different weapons – one for close-range and one for long-range. While it might be tempting to explore the world with multiple builds of your favourite weapon, it’s worth noting that your ammo is extremely limited and is shared between all weapons of the same type.

If you want to survive in the post-apocalyptic wilderness and fend off dangers, we recommend carrying three different types of weapon, all using different types of ammo (including the Tihar, which uses cheaply-crafted ammo). This allows you to switch between weapons in the heat of battle when you run out of ammo, which will be fairly often if you’re not observant and stealthy. 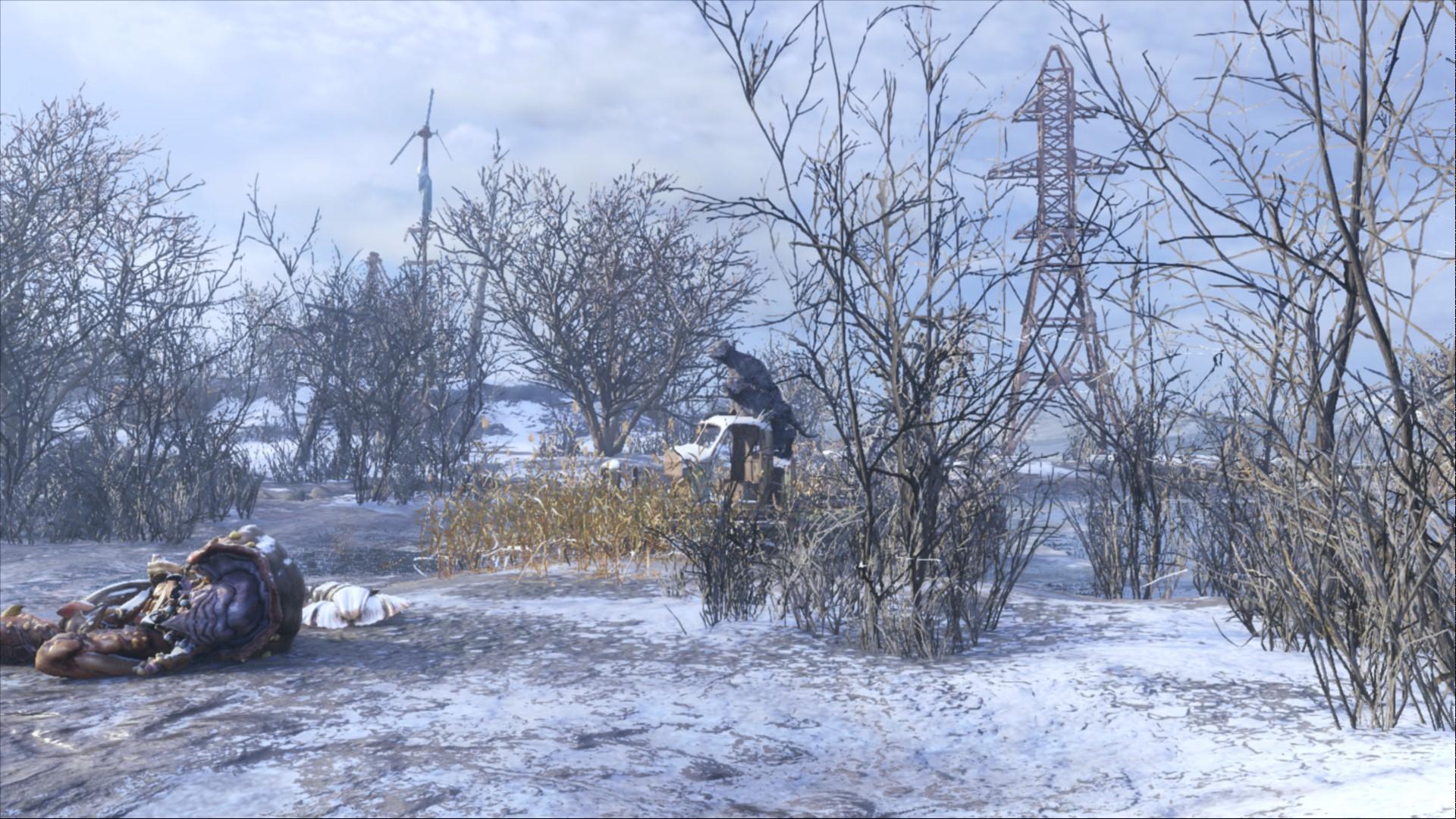 All NPCs in Metro Exodus have unique characteristics and weaknesses that can be exploited if you’re patient enough – take the Watchmen, for example. The mutated hound-like animal sends out a scout to find food (aka you). It’ll often be perched high up, looking around for its next meal, and when it’s sighted it’ll alert the rest of the pack to come running – not ideal.

But if you take out the scout quietly, you can avoid a battle that you’ll either lose or needlessly spend a lot of valuable resources winning. 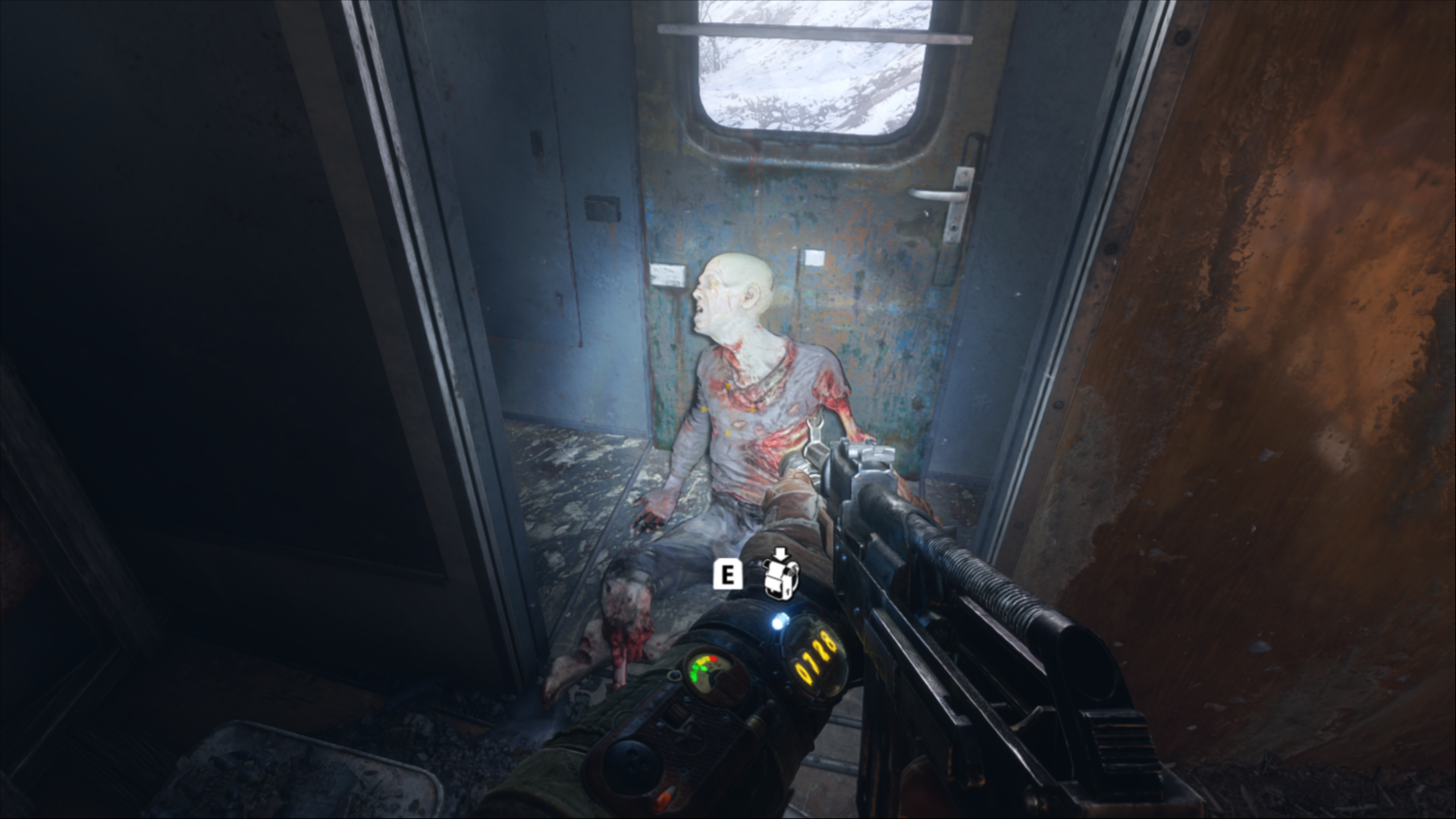 In a world without McDonald’s, Amazon or just about anything else, resources are both hard to come by and very valuable. You can craft everything you need for survival, from fresh air filters and medkits to much-needed ammo, grenades, molotovs and more, but only if you’ve got the right resources.

Resources come in various shapes and sizes, and it’s not always easy to spot in the environment, but we’d recommend scavenging every single location you explore for potential resources – especially if there are dead enemy bandits laying around. These are usually goldmines of not only resources but new weapon mods, allowing you to customise your existing weapon in new and deadly ways. 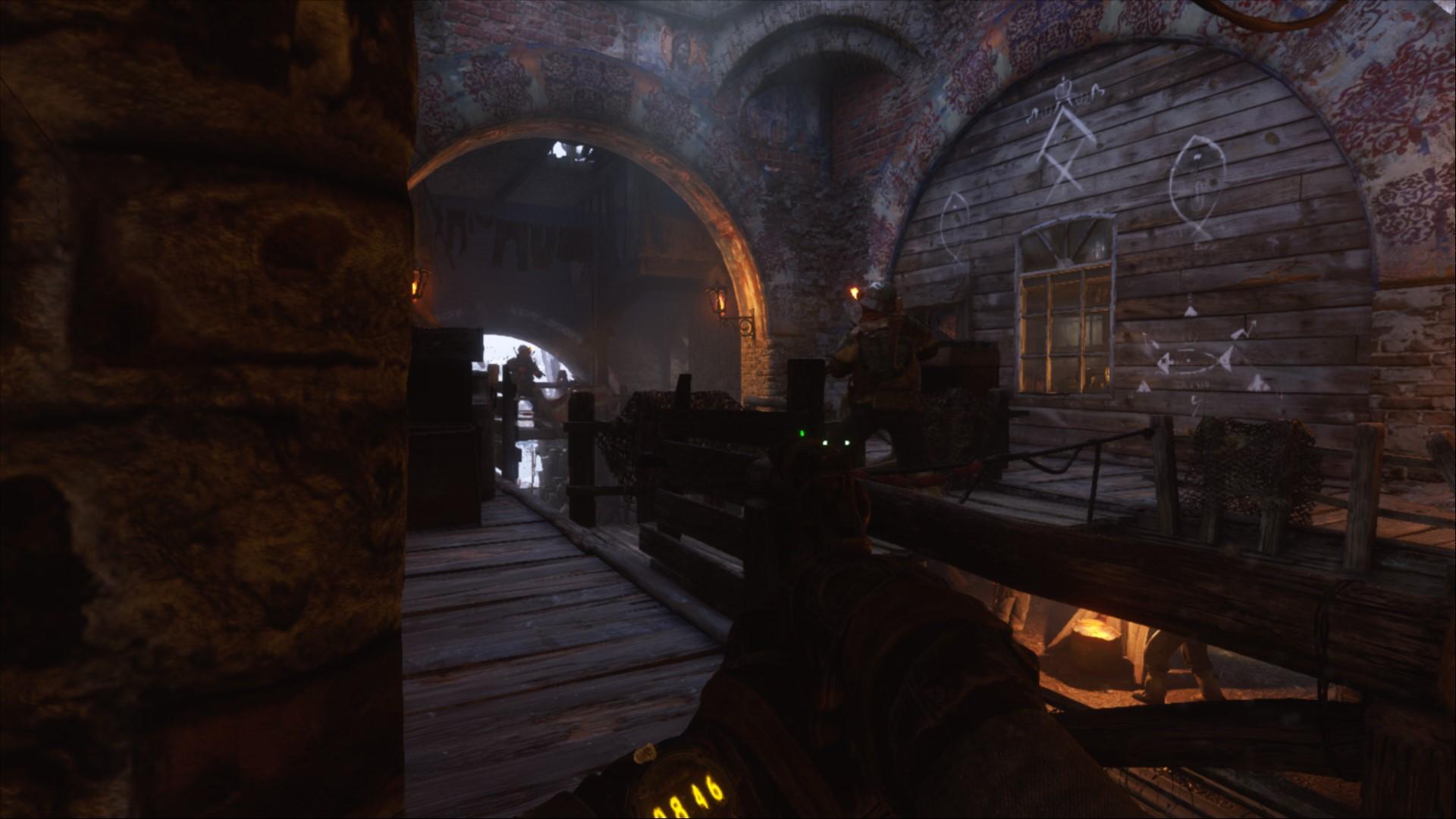 If you haven’t got the message by now, ammo is limited so you’ll want to utilise stealth whenever possible to avoid conflict or get the jump on your enemy. The environment is littered with small crawl spaces, secret entrances and other structures that can be used to your advantage when stealth is employed.

You’ve also got a small LED indicator on your left arm – when it’s lit, the enemy will be able to identify you. But if you stick to dark areas, extinguish any source of light (including your flashlight) and crouch slowly, then you’ll be nearly invisible. Be wary of animals though; even without sight, some animals can smell you. We found that out the hard way on more than one occasion.

Oh, and watch out for glass and other objects on the ground – these can be broken or knocked, alerting the enemy to your presence. 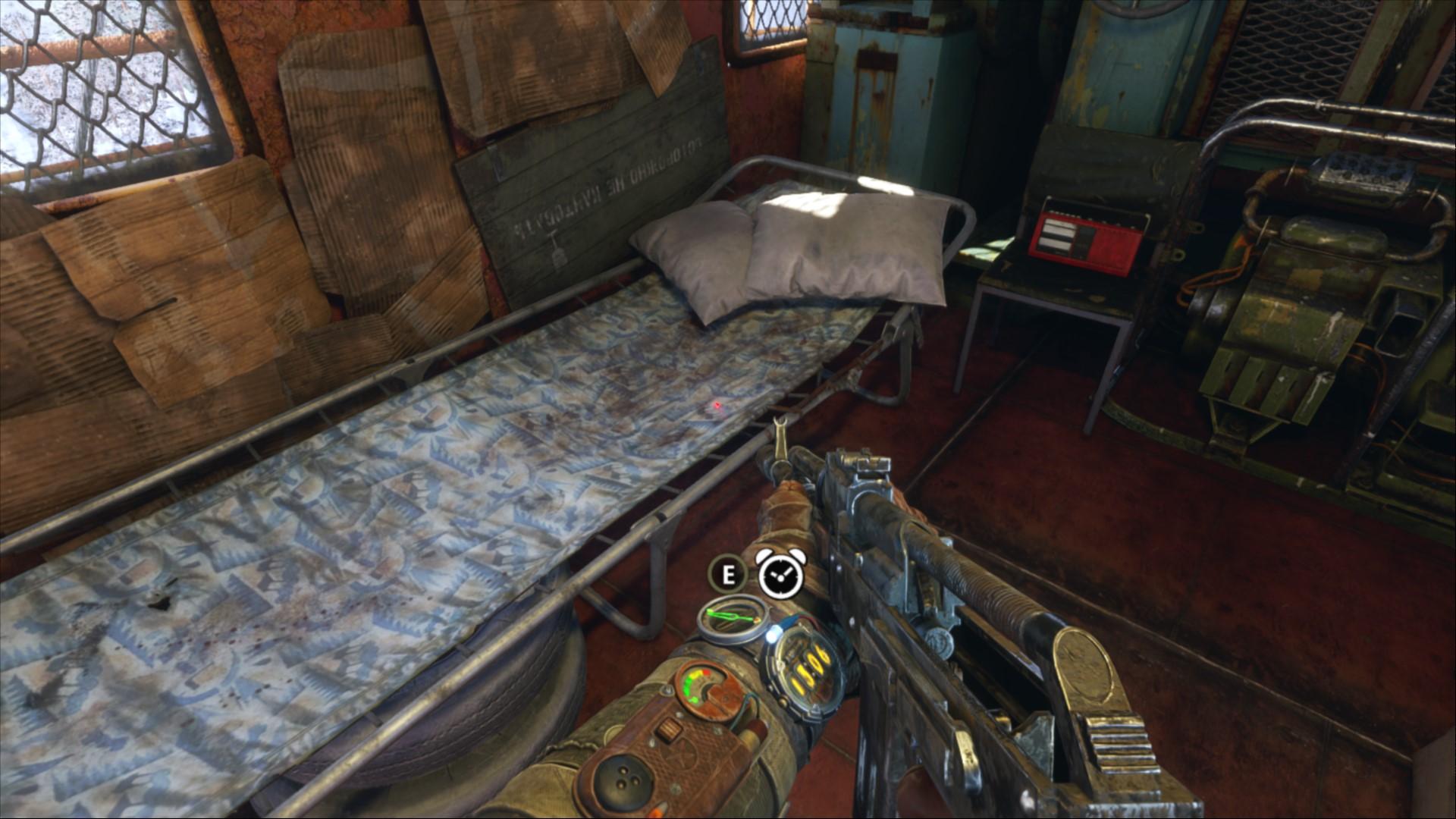 Metro Exodus features not only a dynamic weather system that can help or hinder an attack, but also boasts a day-night cycle – and it does more than just make the environment dark and light. The habitants of the open world respond to the time of day, so consider the best time to make your move. Bandits, for example, are more likely to explore during the day (making for a not-so-ideal impromptu gunfight), and asleep at camp at night, making for an easier stealth target.

But while bandits will be asleep at night, not all residents will be. Mutated animals are much more common – and terrifying – at night, and you’ve got to avoid electrical anomalies too. These anomalies appear randomly at night, giving off not only high amounts of electricity but deadly levels of radiation too. So, while the battle may be easier at night, travelling to the destination might prove a (welcome and exciting) challenge.

Whatever your choice, you can change the time of day from any camp bed in the open world.