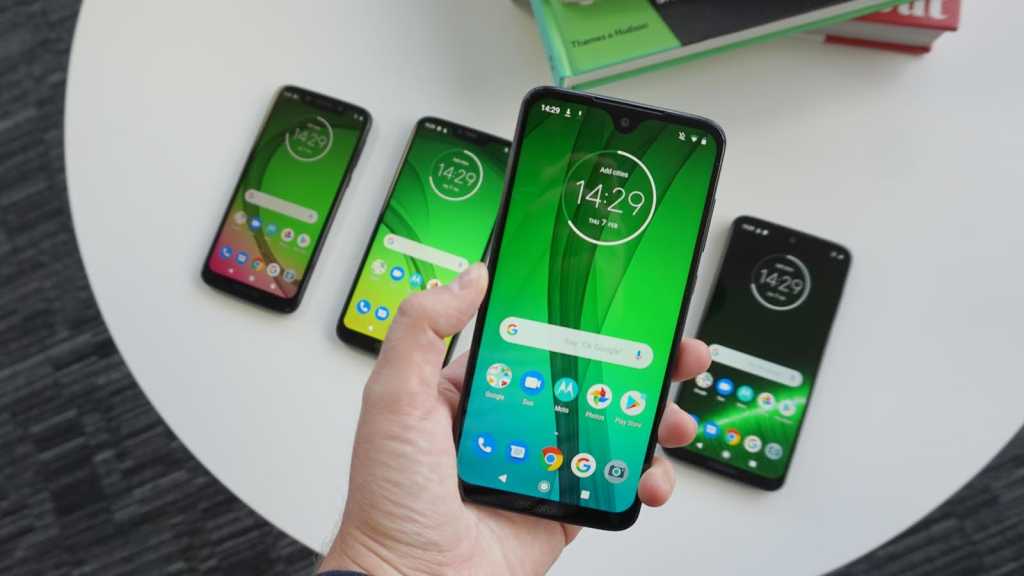 Motorola’s range of affordable Moto G phones has been refreshed for 2019. There are four Moto G7 models including the Play, Plus and Power so choosing might be tricky. Here we compare them on price, design and specs.

With an additional device in the range, the G7 Power, it’s even harder to work out which phone is the best one for you. Especially since the phones all look pretty similar and share various features. Read our  Moto G7 review and  comparison between the G7 and G6.

Let’s start with price, which is always a big part of the buying decision. Luckily, these are phones you can, and should, buy outright rather than on a contract meaning you’ll likely pay less money over its lifespan.

As you can see below, the G7 Play model is the cheapest followed by the G7 Power. The regular G7 is probably the best balanced phone in terms of what you get for your money but you can go all-out with the G7 Plus and still not break the bank.

You can buy them from 1 March from retailers like John Lewis, EE, Vodafone and Tesco Mobile. Note that the regular G7 is exclusive to Amazon. You can find out where to buy the phones at the best prices in our  Moto G7 deals round-up.

There are a few key design differences to consider here, starting with the notch which makes an appearance.

The G7 and G7 Plus have a small waterdrop style notch round the camera in the center which, in the world of notches, looks pretty nice. The Play and Power on the other hand, have a much wider and more intrusive notch.

In the same pairings, the two more expensive phones have the benefit of a P2i water repellent coating. It’s not proper waterproofing but works well and is better than nothing. If this is important, don’t go for the Play or Power.

You’ll also be limited if colour is an important part of your choice, with just two for each model apart from the G7 which comes in three. It’s a shame the G7 comes in black and white, while the Plus is either deep indigo or viva red.

Things get a little complicated comparing the specs of four different phones, so we’ll go through different key areas and highlight what you’re getting.

Starting with the display, the Plus model unusually doesn’t have the largest screen. Instead it’s the same as the regular G7. Both have the same resolution.

As mentioned earlier, bear in mind that the notch is a lot smaller and nicer looking on the G7 and G7 Plus.

Here’s where the G7 Plus offers something extra with its Snapdragon 636, while the remaining line-up has the slightly lower tier Snapdragon 632.

There’s also a drop in memory and storage if you opt for the G7 Plus. All the phones can take a microSD card up to 512GB though.

Photography and video is where the G7 range differs the most, with no two phones having the same combination of cameras.

The most expensive G7s have three cameras while the others only have two. They all vary in resolution and other specs. As you might expect, the G7 Plus has the most impressive setup.

Generally, these phones have the same size battery but the new addition in the form of the G7 Power ups the ante with an additional 66 percent capacity.

It does have the fastest charging though, which is given to the G7 Plus. So it’s a mixed bag here but the Power has the best balance in this area.

There’s little else to consider as all the G7 phones have USB-C now along with features like a headphone jack and fingerprint scanners.

They all have NFC (in Europe at least) apart from the G7 Play.

The G7 Play is the one to go for if you’re on a tight budget.

It’s under £150 which is amazingly good value and yet still retains a lot of decent features like the same processor as the G7 and a fingerprint scanner.

The G7 Power is the one to go for if you want the best battery life. It’s battery is a whopping 66 percent bigger than all the other models.

It doesn’t have the fastest charging, but 18W TurboPower is still more powerful than most phones.

The G7 is the all-round of the bunch, by balancing price with design features and specs.

It’s the one to go for if you’re not fussed about the Power’s larger battery or the Plus’ better cameras and processor.

The G7 Plus not only comes in nice colours but has the best specs, if you can afford it.

It’s not much more expensive than the regular G7, but note that the screen isn’t bigger. Instead you mainly get a faster processor, better cameras and crazy fast TurboPower charging.