Buying a graphics card is tricky. There’s an almost endless choice on offer and too many acronyms and unpronounceable product names can make selecting the correct one for you a daunting task, but we’re here to make it much easier.

If you’re about to buy a graphics card, be sure to read our tips below, and you’ll spend your money wisely.

What should I look for when buying a graphics card?

The first thing to decide is what exactly you’re going to use your graphics card for. If you’re planning on playing games which aren’t graphically intensive (popular games like League of Legends, Dota 2, World of Warcraft and Fortnite don’t require an expensive graphics card) then you don’t need a top-end card .

On the other hand, if you’re planning on playing the latest first-person-shooter or racing sim on the highest graphics settings then you’re going to want something high end such as the Nvidia RTX 2080.

It isn’t quite that simple, however. You need the answer to two basic questions.

The first question should be easy to answer, but the second one will – to some extent – determine whether some cards will be overkill. For example, if your monitor has a 1920×1080 resolution, there’s little point in spending hundreds extra on that RTX 2080 as you won’t be able to use all its power at that resolution.

In fact, we can save you time reading the recommendations below because if your monitor is limited to 1080p and 60Hz, then you may as well go for the Radeon RX 570 which is the best budget graphics card at the moment. Even the 8GB version (try to avoid the 4GB model) costs just £144 from Amazon UK / $169.99 from Amazon US. 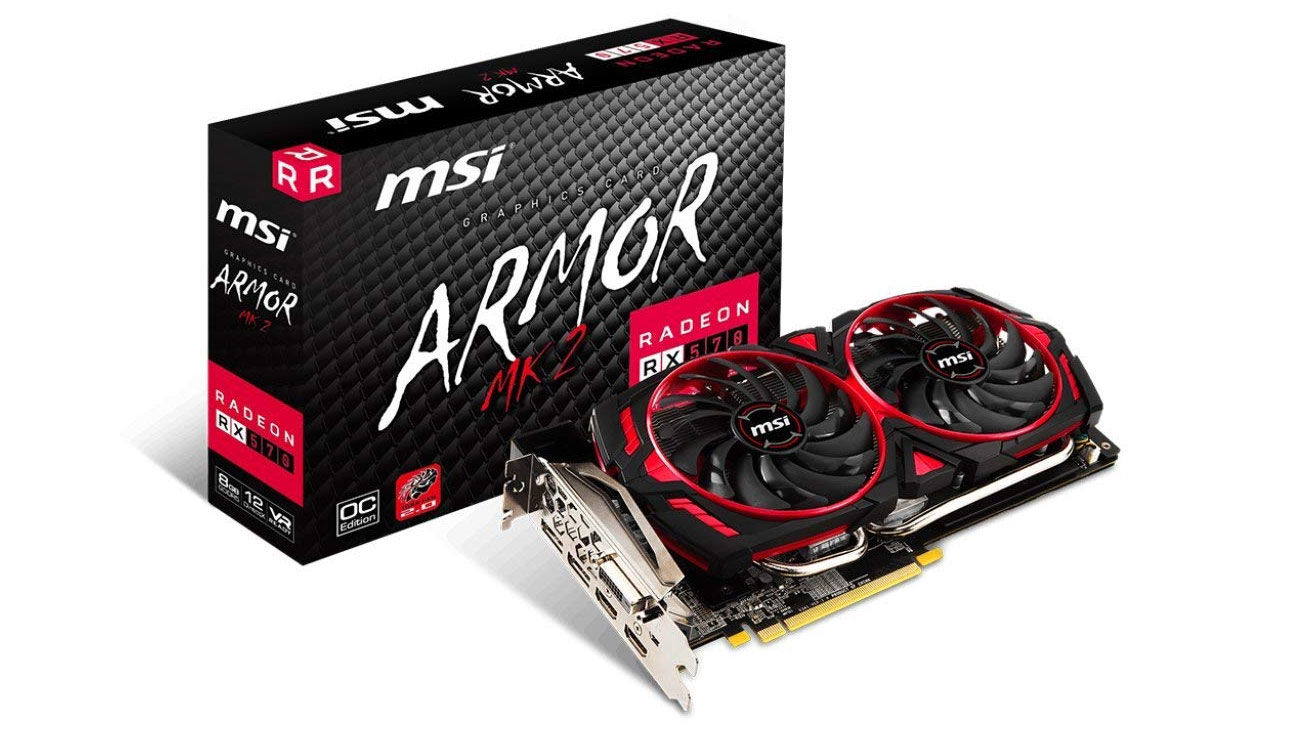 But if  you have a 4K monitor, or a 1440p display that runs at more than the usual 60Hz, then to run games at their highest quality settings at your monitor’s maximum refresh rate, you will need a lot of power.

60fps – frames per second – is usually the target for gaming, although if you’re playing certain games competitively you may be using a 120 or 144Hz monitor. Hz is the same as fps, in this case. You’ll want to make sure your graphics card is capable of running your games of choice at these frame rates, or you won’t be using your monitor’s potential.

Does G-Sync and FreeSync matter?

Ok, so what we haven’t mentioned yet are these two technologies. The former is Nvidia’s and the latter an open standard that AMD uses in its cards. Put simply, it replaces V-sync and allows the graphics card and monitor to match their refresh rates at speeds above 60fps to ensure that you don’t see any horrid tearing and get very smooth-looking gameplay with zero jerks or judders.

If you already have a monitor that supports FreeSync, then you might want to buy an AMD card so you can use the technology. Likewise, if you have  G-Sync monitor you’ll want to pick an Nvidia card. But for most people, who only need to game at 60fps, none of this really matters: either brand of card will play nicely with your monitor whether it supports FreeSync, G-sync or neither.

Nvidia does now support a handful of FreeSync monitors with its cards, but it’s unlikely yours is on the list.

Is it worth buying an Nvidia RTX card?

Currently, only a handful of games feature Ray Tracing which is the main feature of Nvidia’s RTX cards. Ray tracing makes (some) games look radically different and more realistic, so if your favourite game is Metro Exodus, you should probably think long and hard about buying an RTX card.

If you don’t care about ray tracing because the games you currently play don’t support it, then the price/performance for this latest series of Nvidia cards is not favourable unless you’re trying to run a game at 1440p and a very high frame rate (120 or 140) or 4k and 60fps.

Having said that, Nvidia has just released ‘Super’ versions of the 2060 and 2070, which are basically Ti cards with a different name. These are much better value.

How about AMD’s new “Navi” cards?

AMD has also just launched new cards, the Radeon RX 5700 and RX 5700 XT. They support the new PCIe 4.0 standard, for which you’ll need an X570 motherboard. They’re designed to compete with the RTX 2060 and RTX 2070 respectively, and will cost around the same as the Nvidia equivalent. But they won’t support ray tracing, which could be a turn-off for some.

The RTX 2080 Ti is the current king of the consumer graphics cards.

If you’re looking to future-proof your build and make sure you can play all the latest titles will all the graphics sliders right the way up then this will be the card for you.

This does all come at a (substantial) price as the RTX 2080 Ti won’t ever be described as cheap and if you’re looking for the best performance per pound/dollar spent, you won’t find that here either.

Take a look at our sister site PCWorld’s review of the RTX 2080 Ti. 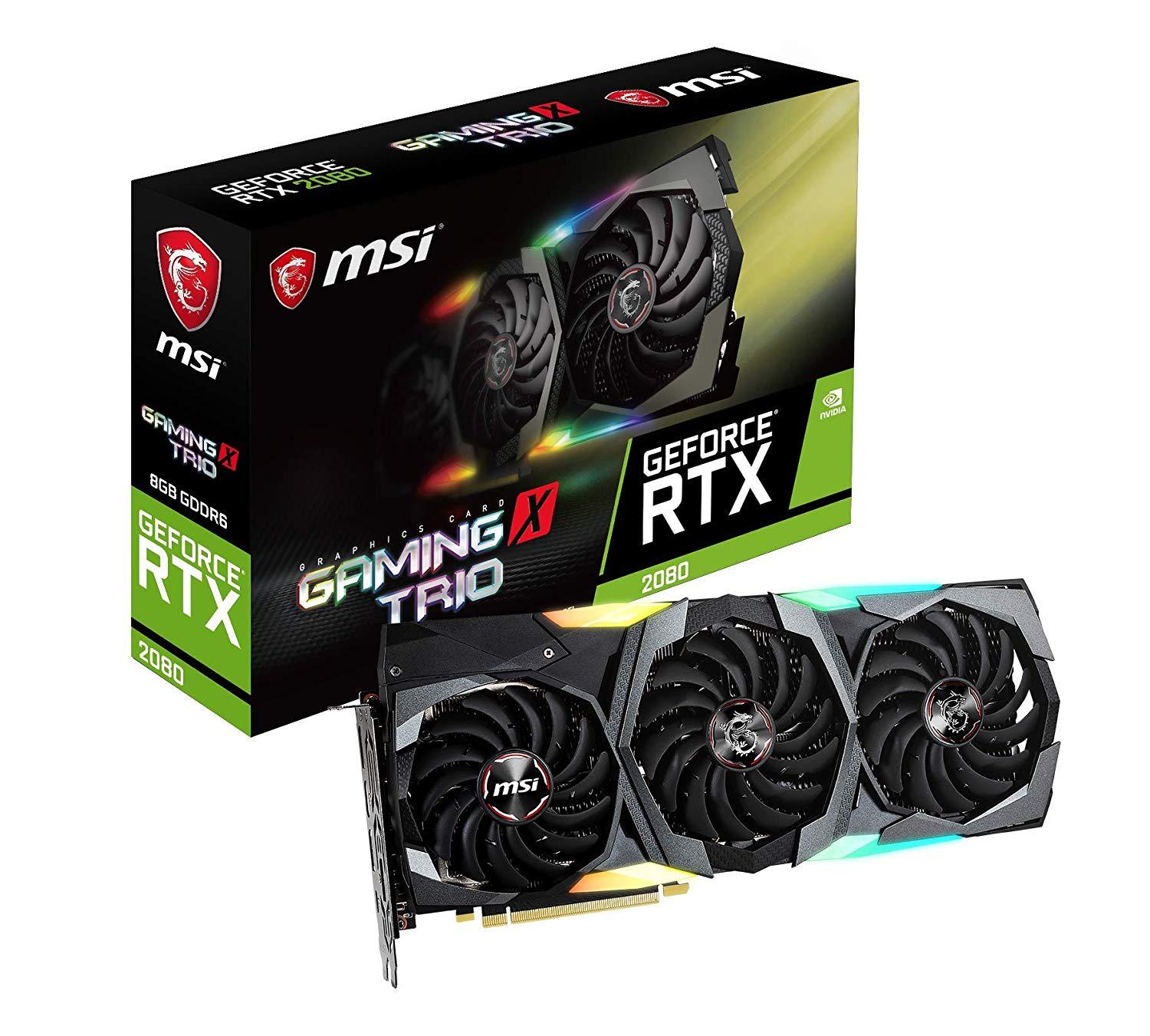 The RTX 2080 will be one of the more popular cards of the next few years, offering a better price/performance ratio than its bigger brother in the 2080 Ti.

The card stacks up well to the previous generation flagship the GTX 1080 Ti in comparison tests and comes with the added bonus of having Ray Tracing technology built in. 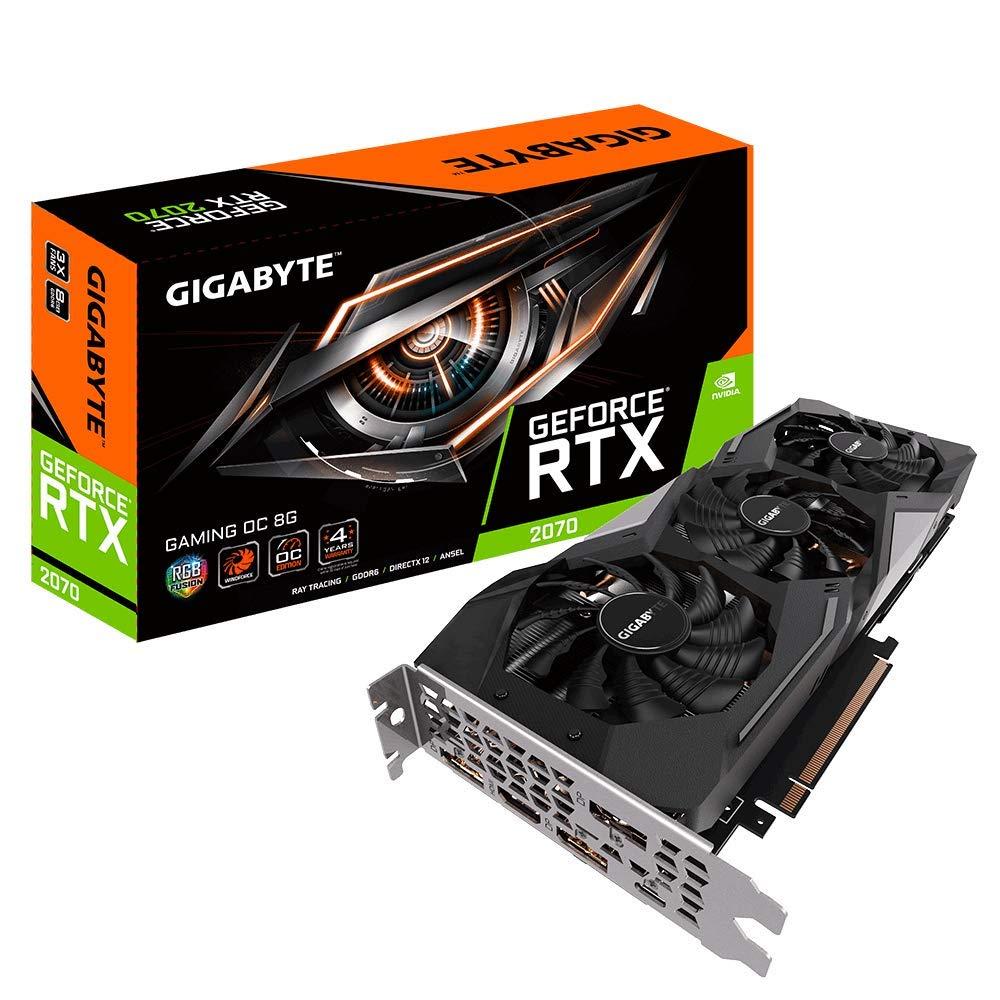 The RTX 2070 is the lower end of Nvidia’s current flagship cards.

The performance is still fantastic and it offers the best price/performance ratio of the three. If you can snap up a good deal on this you’ll be able to game with the best of them for a year at the very least.

The downside to this card is that it may struggle with Ray Tracing despite being an RTX series card due to the amount of grunt needed to support the feature.

Take a look at the RTX 2070 Review on PCWorld.com. 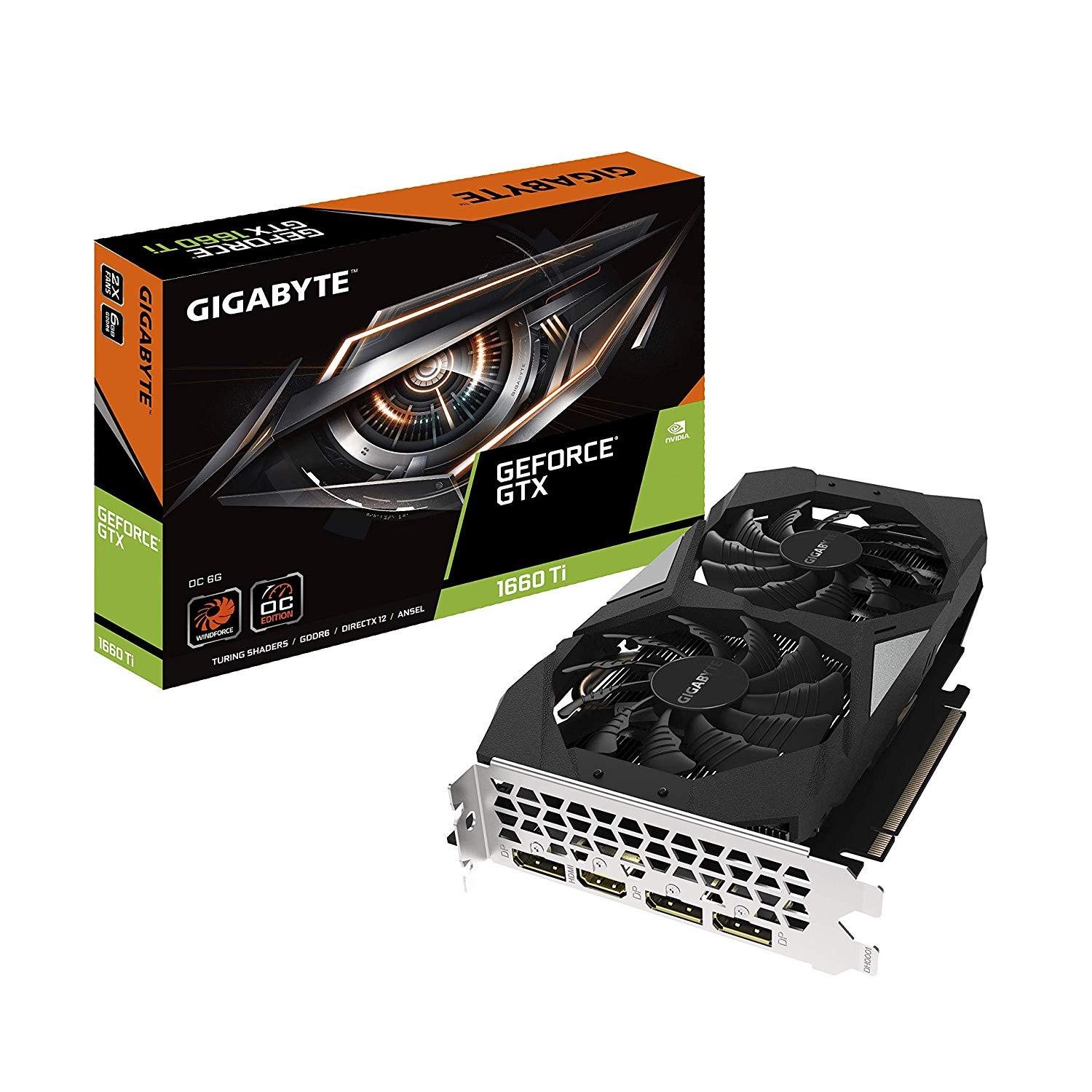 The GTX 1660 Ti is one of Nvidia’s latest graphics cards and provides an outstanding level of performance for the price and is perfect for 1080p and 1440p gaming.

This card sees Nvidia giving PC gamers on a budget a fantastic option if they’re looking to run the latest games. Nvidia’s pricing strategy over the past few years has meant that consumers are paying more for the same level of performance increase.

The 1660 Ti flies directly in the face of this, and compared to the RTX series, is a great option for those of us who struggle to justify over £400 / $400 on a graphics card. 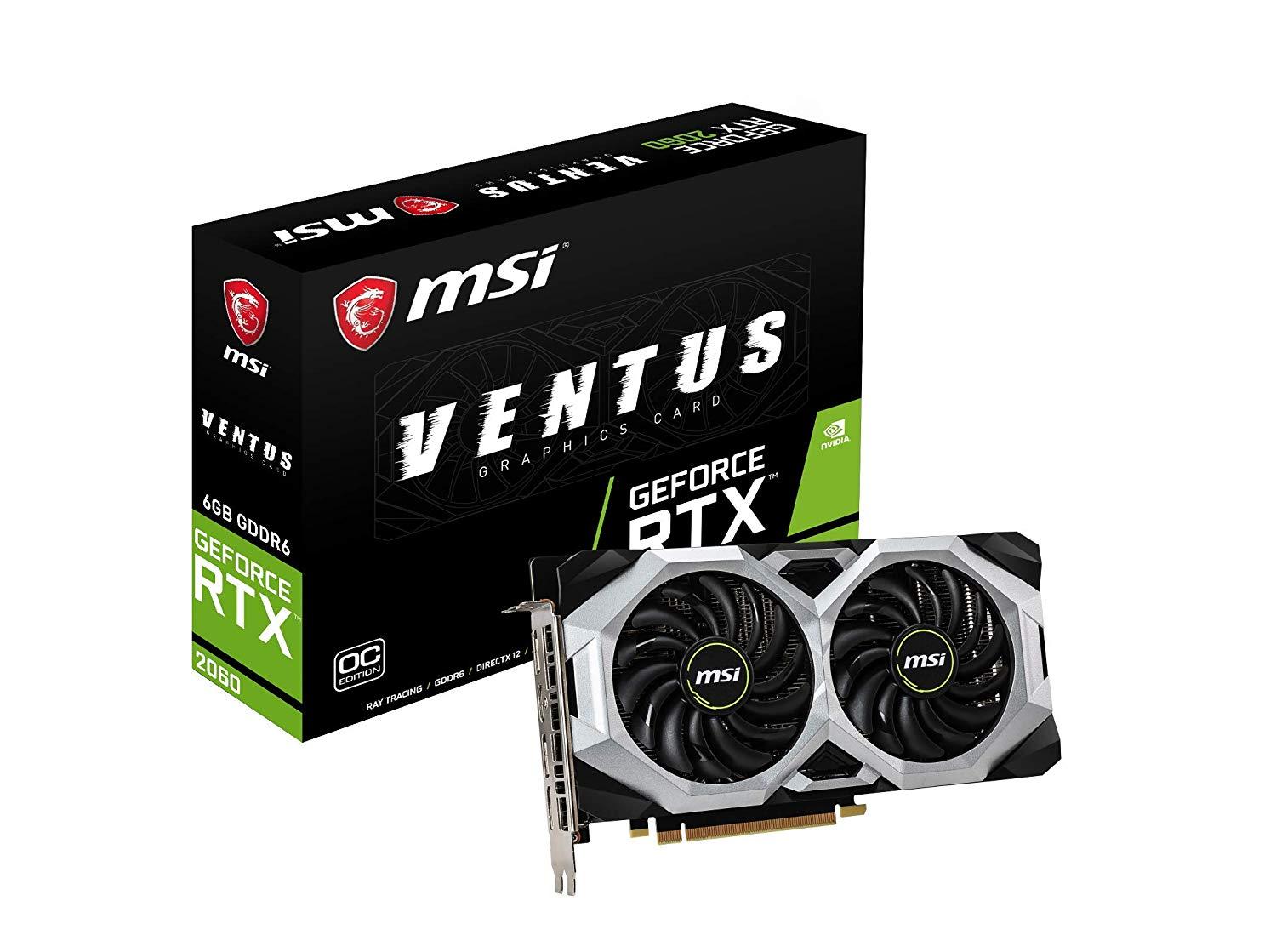 The entry-level card in the RTX range, the 2060 is your route into real-time ray tracing. However, really soon – if not by the time you read this – there will be an RTX 2060 Super version of the card available.

The Super is really the ‘Ti’ version which should cost roughly the same as the regular 2060 but offer a good bump in performance. That’s good news, since the RTX 2060 was more expensive than similar-performing cards from the older GTX 10-series of cards. So you can buy a GTX 1070 for about the same price, if you’re happy to forego ray tracing and the deep learning features.