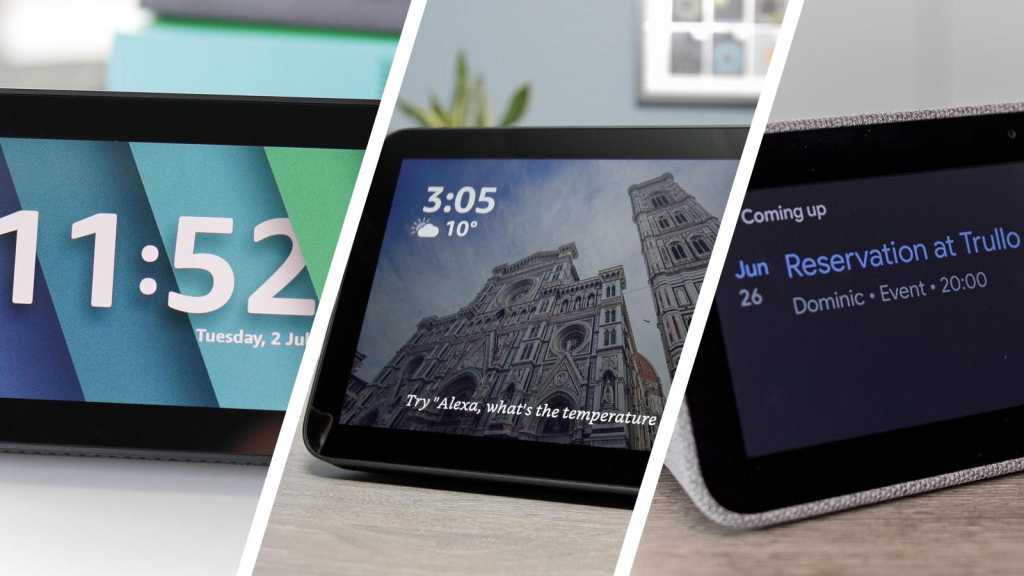 The smart display is the natural evolution of the smart speaker, adding a screen that lets you see how the weather will look instead of only hearing about it, look at your route to work on a map, or simply video call your family and friends.

Smart displays look a bit like tablets, but it’s worth noting that they’re usually fixed into their stands and run off mains power – these aren’t portable devices with their own batteries. The notable exceptions are the Facebook Portal Go, which has its own battery, and the Lenovo Smart Tab P10, a tablet that ships with a dock that turns it into an Alexa smart display.

Having a screen unlocks the potential to use a smart display not only for finding out the weather or checking your calendar, but also using the screen as a digital photo frame.

You can also often use them for video calls, but take care: not every smart display includes a camera, so check that video calls are supported before you put your money down. You might also want to use them to watch videos, but remember that Amazon’s devices don’t support the YouTube app, so it’s much easier to watch video on one of the Google smart displays.

This is why apart from the individual specs of each display, you really need to choose between Alexa and Google Assistant. We can’t outright tell you which to go for as it will come down to things like whether you have other devices in that ecosystem and if the other smart home devices you have, or are planning to buy, are compatible with that system. 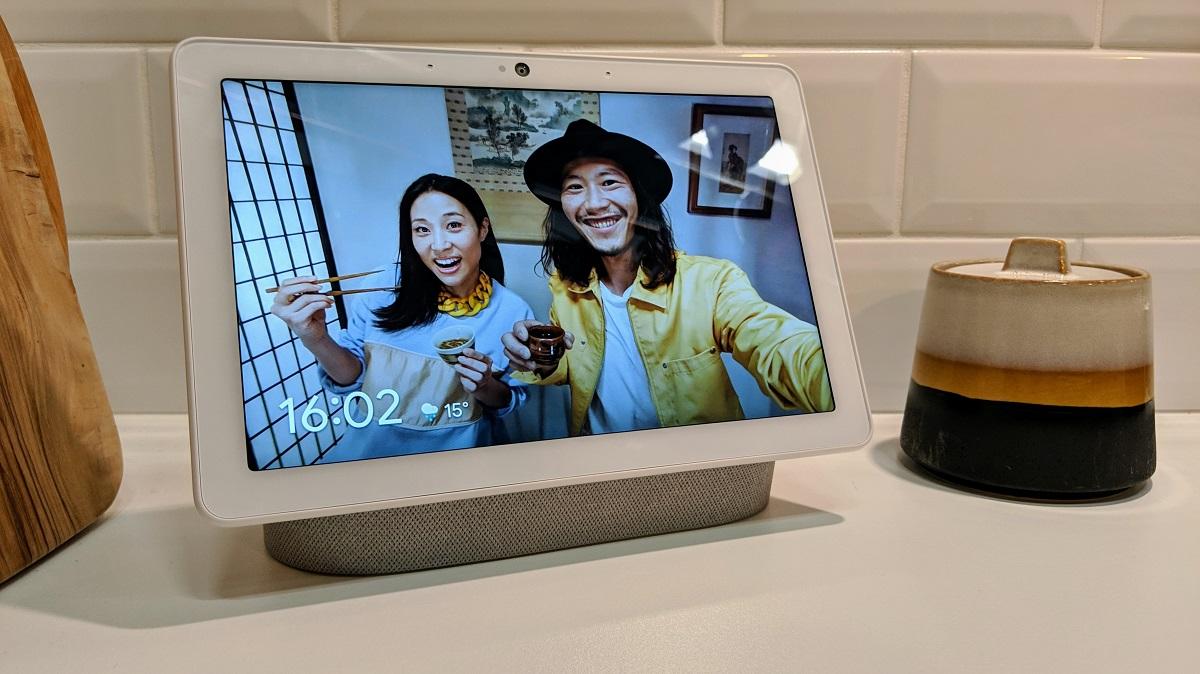 The 10 inch screen is larger and more useful than the smaller Nest Hub, and the built-in camera is far more useful than simply making video calls. It can recognise different people, be used as a security camera and supports gestures for playback.

Audio hasn’t been skimped on: it’s excellent, making the Hub Max a great smart display even if you love to listen to music. The JBL Link View has even better sound but we prefer the Max as an all-round device. 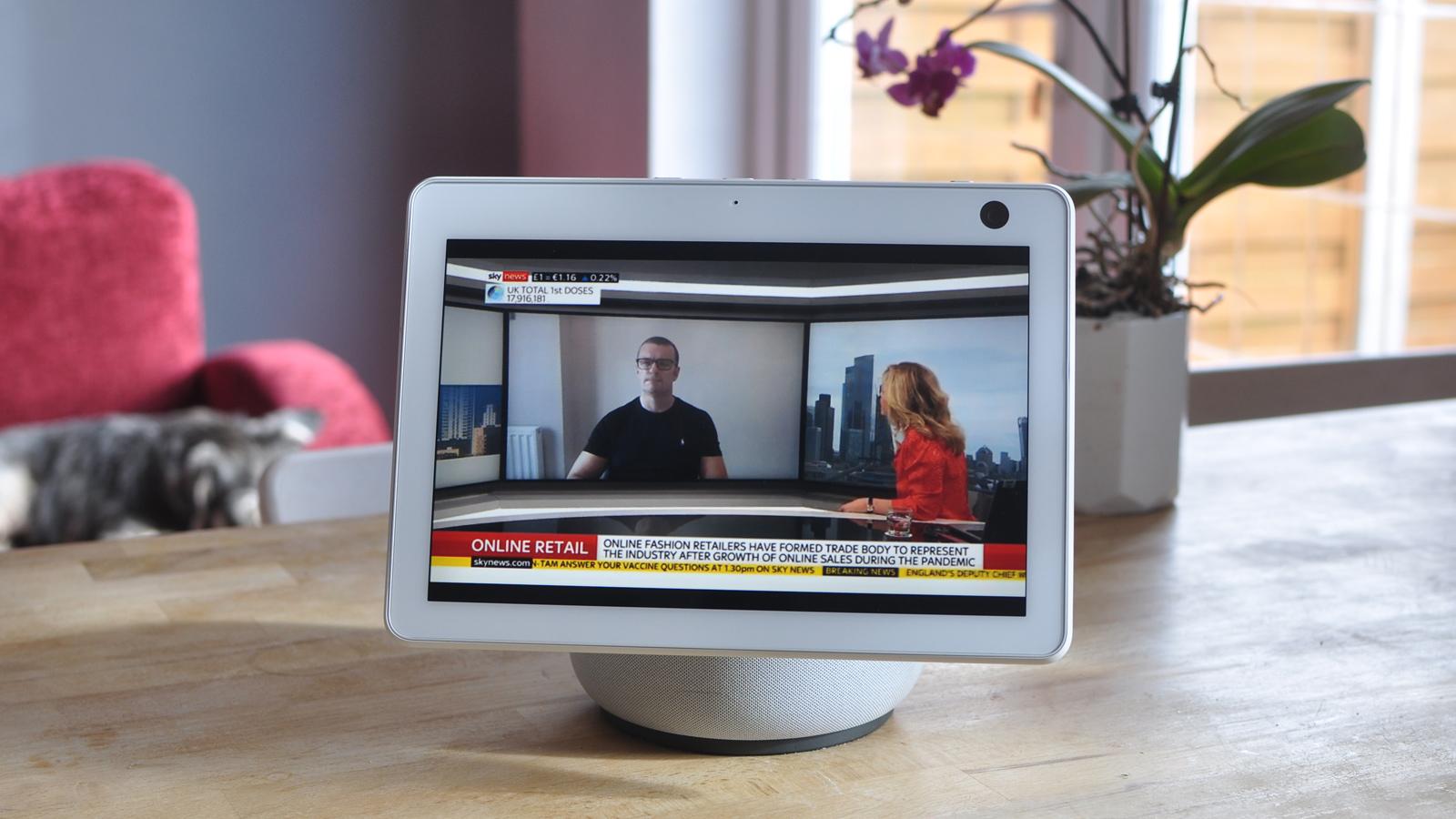 It’s a lot more expensive than the 5- and 8-inch Echo Show smart displays, but the Echo Show 10 justifies its cost with good quality sound and the ability to follow you around the room.

The motorised display may sound a bit gimmicky but it should be useful in larger rooms or kitchens where you’d otherwise have to turn the screen manually to see it.

You can also use its ability to rotate to keep an eye on your room when you’re away, swiping the screen of your phone to turn the camera remotely.

Other than that, the experience is much like its predecessors and the smaller-screened versions. We’d be open to an even larger screen, but as long as you’re not trying to replace a TV with the Echo Show, it’s big enough. 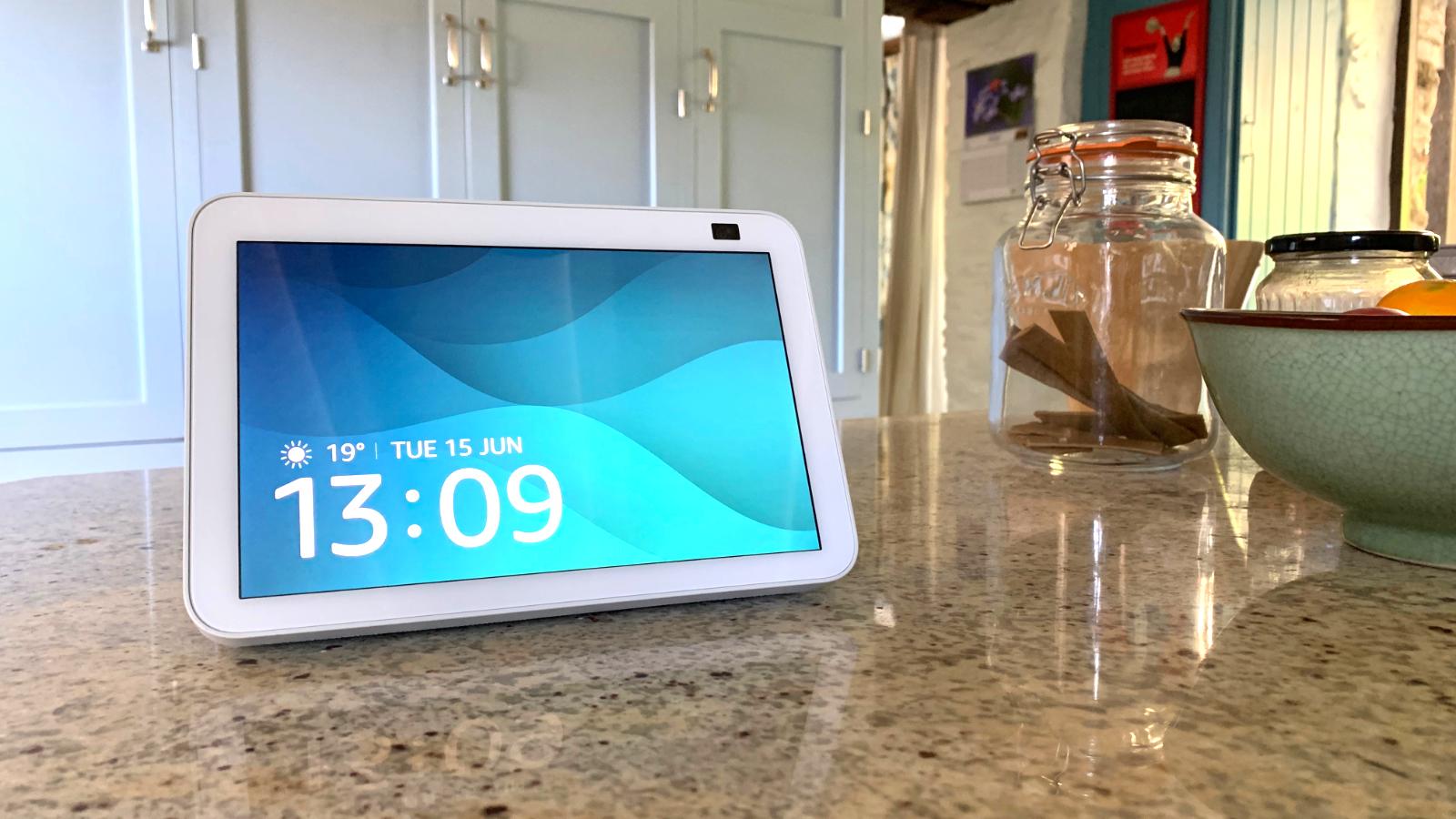 It may not have the Zigbee hub or rotating display that’s built into the more expensive – and larger – Echo Show 10, but this model offers a great compromise of features, screen size and audio quality.

And at this price, those aren’t compromises you’ll ever regret making. Alexa is just as capable here as she is on the most expensive Echo Show 10, able to show the video feed from compatible cameras, show you lyrics for many songs from Amazon Music and more.

Plus, this second-generation model has a 13Mp camera which has plenty of resolution for digital zoom. This is used in video calls to keep you in the middle of the frame even if you move around the room – just like the Facebook Portal and latest iPad Pro. It’s not as versatile as the 360° Echo Show 10, but it’s a good compromise.

Thanks to the recent addition of Netflix on all Echo Show models, they’re a good choice for entertainment. Just note that YouTube isn’t easily available, unlike Amazon’s Fire TV devices and, naturally, Google’s own Nest Hub smart display. 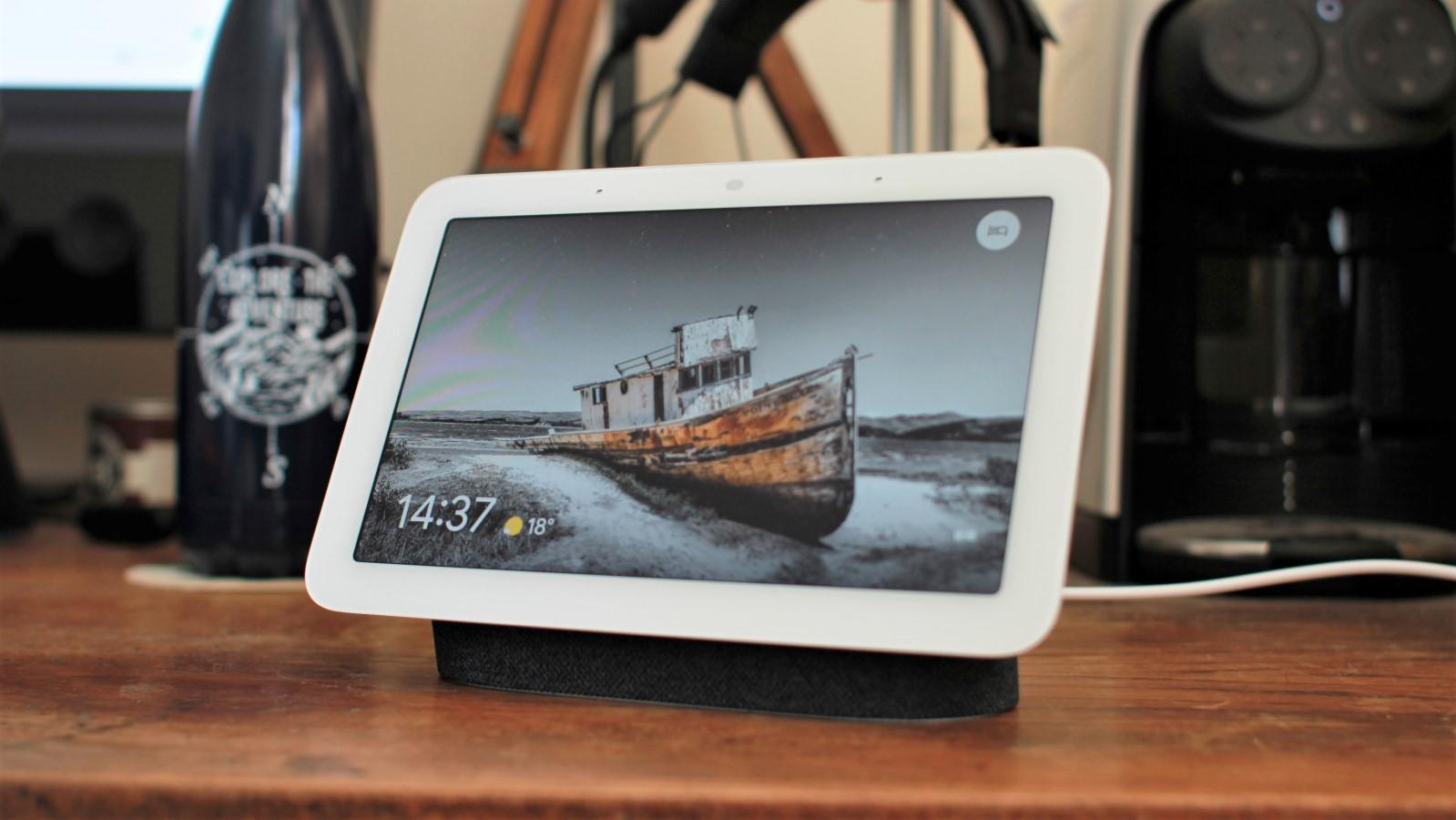 The second-generation version of the Google Nest Hub is a solid step forward from the original model which adds one major new feature: Sleep Sensing.

Using Google’s Soli radar (there’s no camera watching you sleep) the Nest Hub 2 can monitor your movement and breathing in bed and give you a sleep quality report. The only downside? It’s a free trial until 2022, but Google says it may start charging a subscription free for sleep tracking from then.

Otherwise you’re getting a familiar 7in smart display, with the usual Google Assistant support, bolstered by an extra mic and improved audio.

It’s affordable and the compact, stylish design will ensure it fits almost anywhere in your home – though remember that there’s no camera so you can’t use it for video calls. 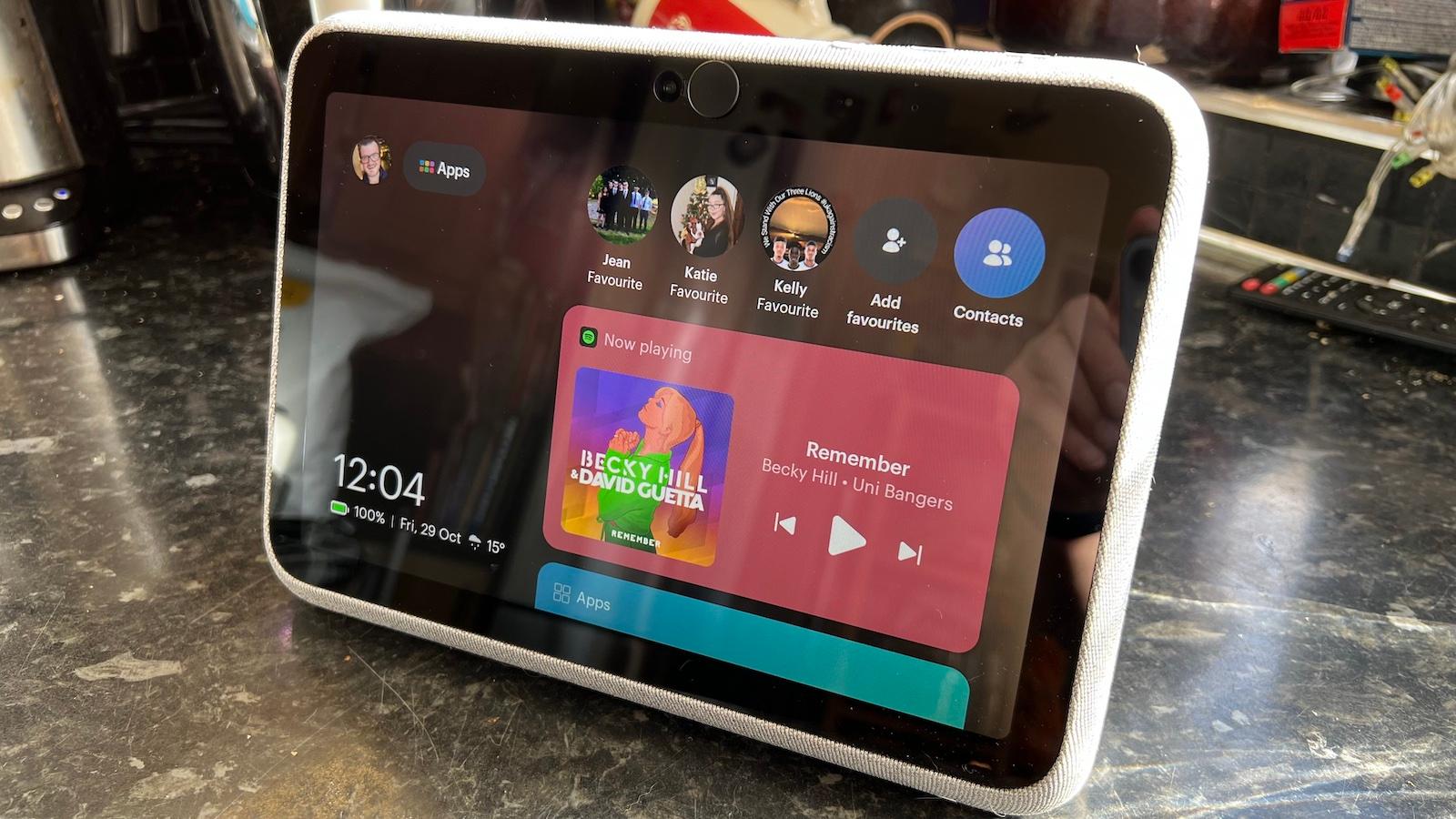 The Portal Go is an oddity in a few ways. First up, it’s one of only a few smart displays from Facebook – rather than Amazon or Google – and so runs the Facebook Assistant.

Second, it’s portable. The 10in display means it’s still a little bulky and heavy, but this is an option if you want to have one smart display that you can use in both the kitchen or the bedroom – or just carry around with you once you start a video call. And with a 5-15 hour battery life it lasts a while too.

The big downside is that the app options and smart features are more limited than on Google and Amazon. There are plenty of video call options – Facebook, WhatsApp, Zoom, WebEx, and more on the way.

It’s less powerful elsewhere, with few apps and a limited smart assistant – though you can add in Alexa for proper smart home controls, albeit lacking a couple of the features you’ll find on a proper Echo device. 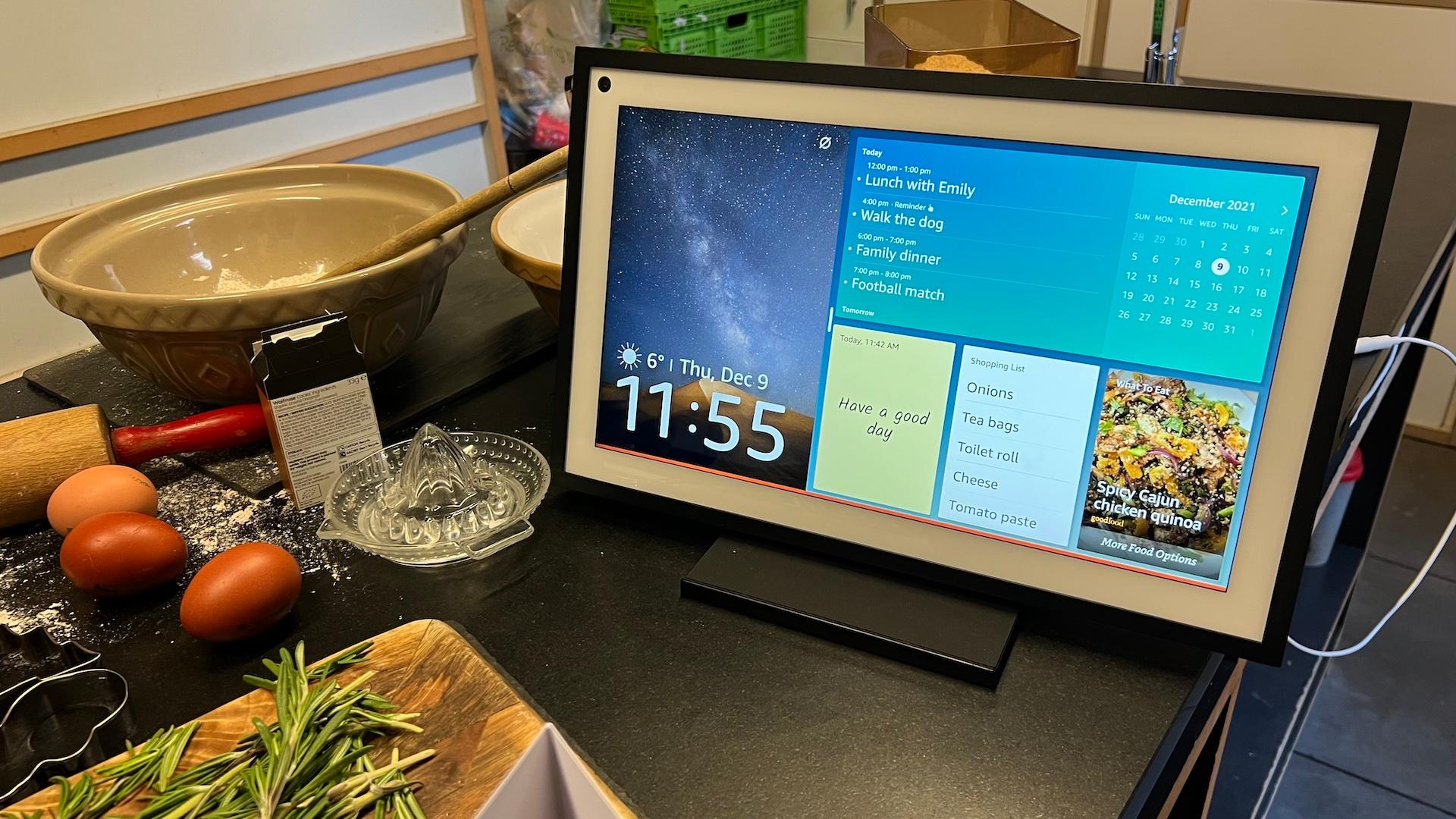 Amazon’s Echo Show 15 is the biggest smart display we’ve ever reviewed, with a whopping 15.6in screen.

At that size, Amazon envisions this as a wall-mounted screen, not even offering a stand in the box if you want to prop it up elsewhere.

It’s big enough to suit the wall though, and uses the big screen to display chunky widgets and big photos. Facial recognition tech – dubbed Visual ID – lets it recognise faces and display custom info relevant to the person in front of it.

We wish it was a bit higher resolution – at this size 1080p begins to look soft – and the audio and camera could both be improved. But if you want a larger smart display that can double as a photo frame on your wall, this is the one. 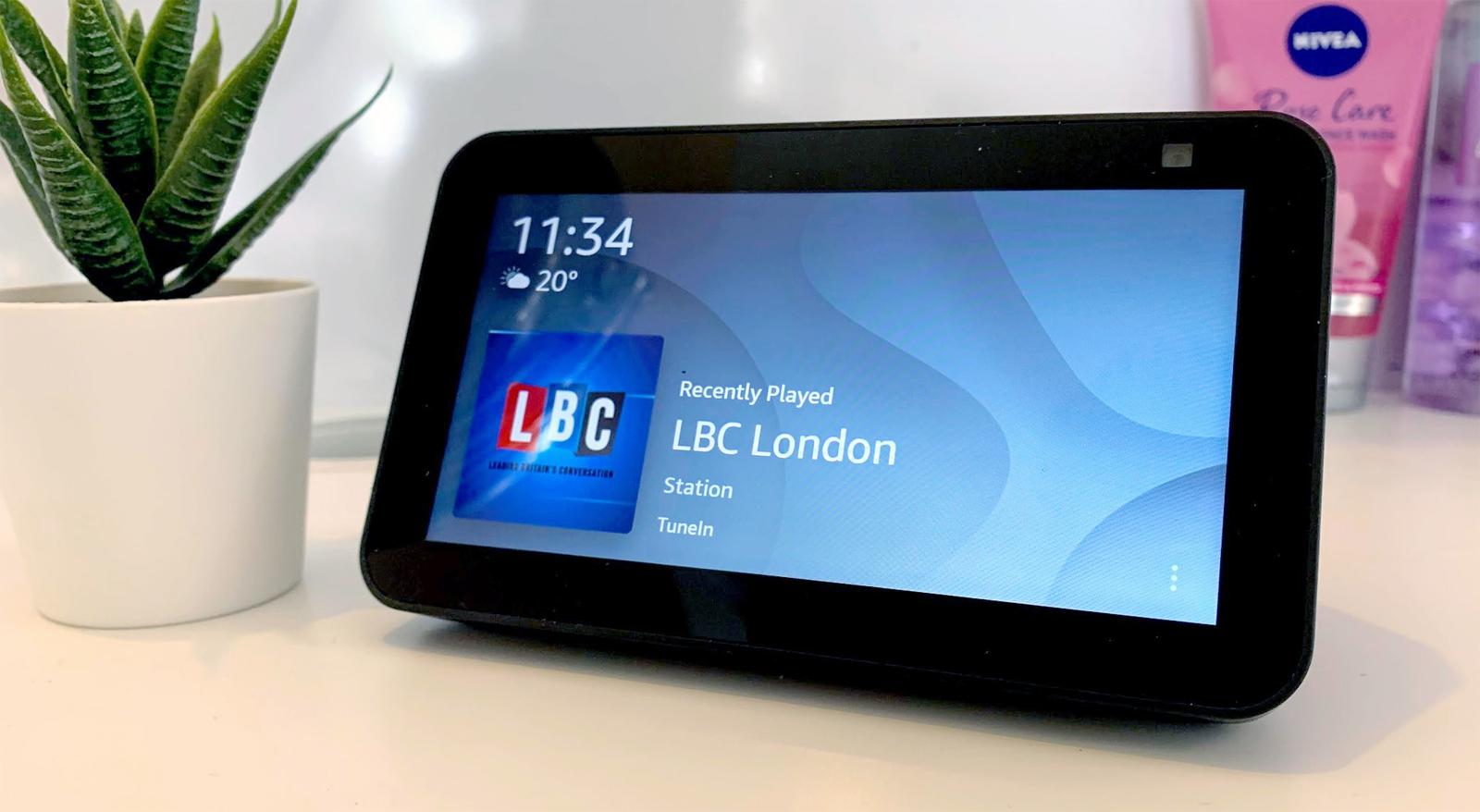 The Echo Show 5 costs less than the fourth-gen Echo smart speaker, yet has a 5.5in screen and camera for video calls. It’s a little small for watching videos from Amazon Prime (or Netflix), but it’s a great size for a bedside table.

Essentially, it’s a good choice if you have a tight budget but want an Echo with a screen and don’t need music to sound amazing. 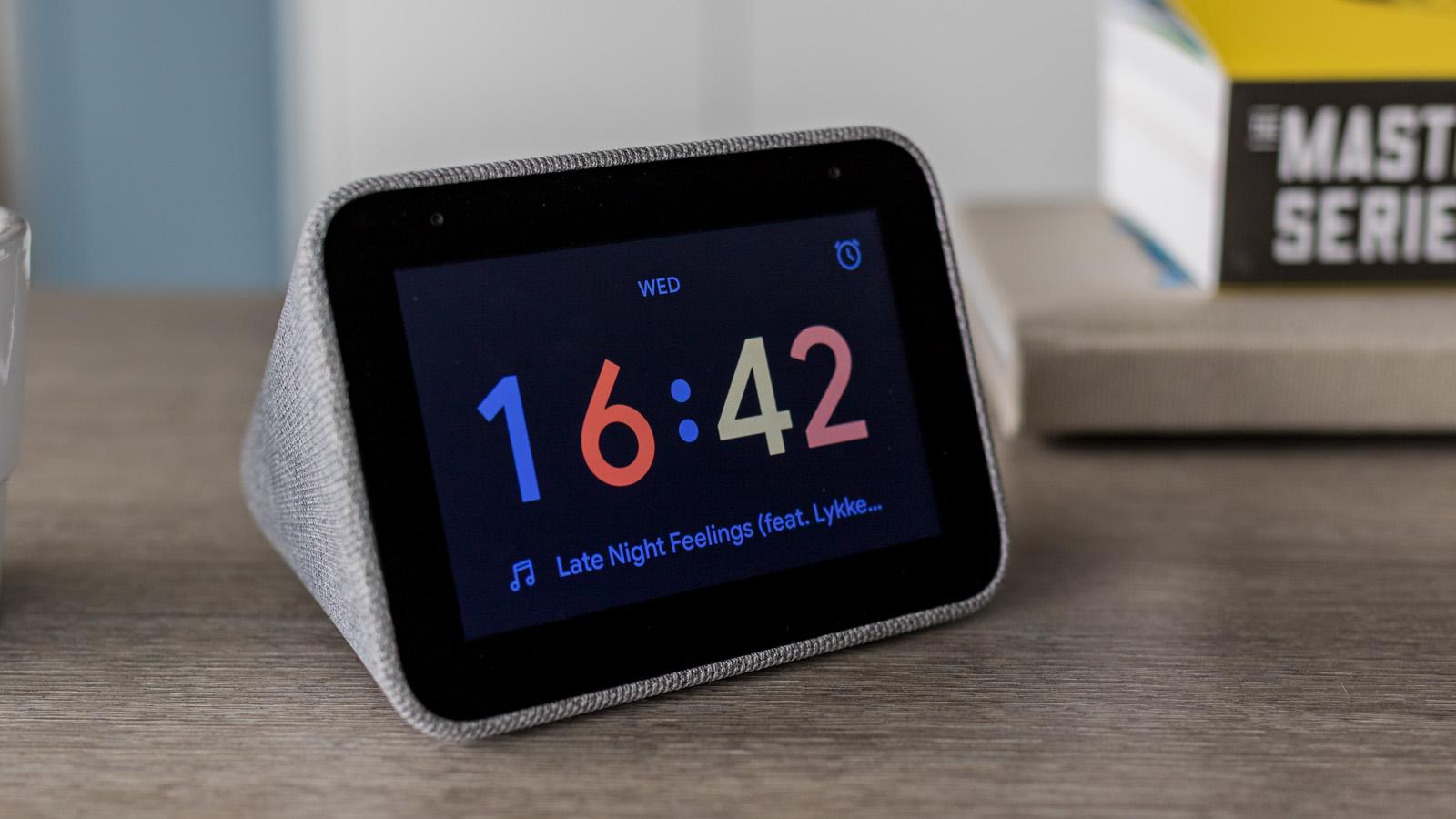 The Lenovo Smart Clock is quite similar to an Amazon Echo Show 5, only with an even smaller 4in screen and Google Assistant instead of Alexa. The slick design, simple interface, and clever features that manipulate screen brightness to keep it dim during the night and slowly brighten it as a light alarm make the device a surprisingly compelling offering.

The only real downside is the lack of Bluetooth speaker support but everything else about this does exactly what you want it to.

Most importantly, the affordable price means it’s easy to justify buying a smart display instead of a smart speaker such as the Google  Home or Echo 4. We’ve seen it on sale for half price quite regularly, making it a real bargain.

Note that there’s also the Lenovo Smart Clock Essential, a cheaper follow-up that has a much more limited display with a stronger focus on being a clock. 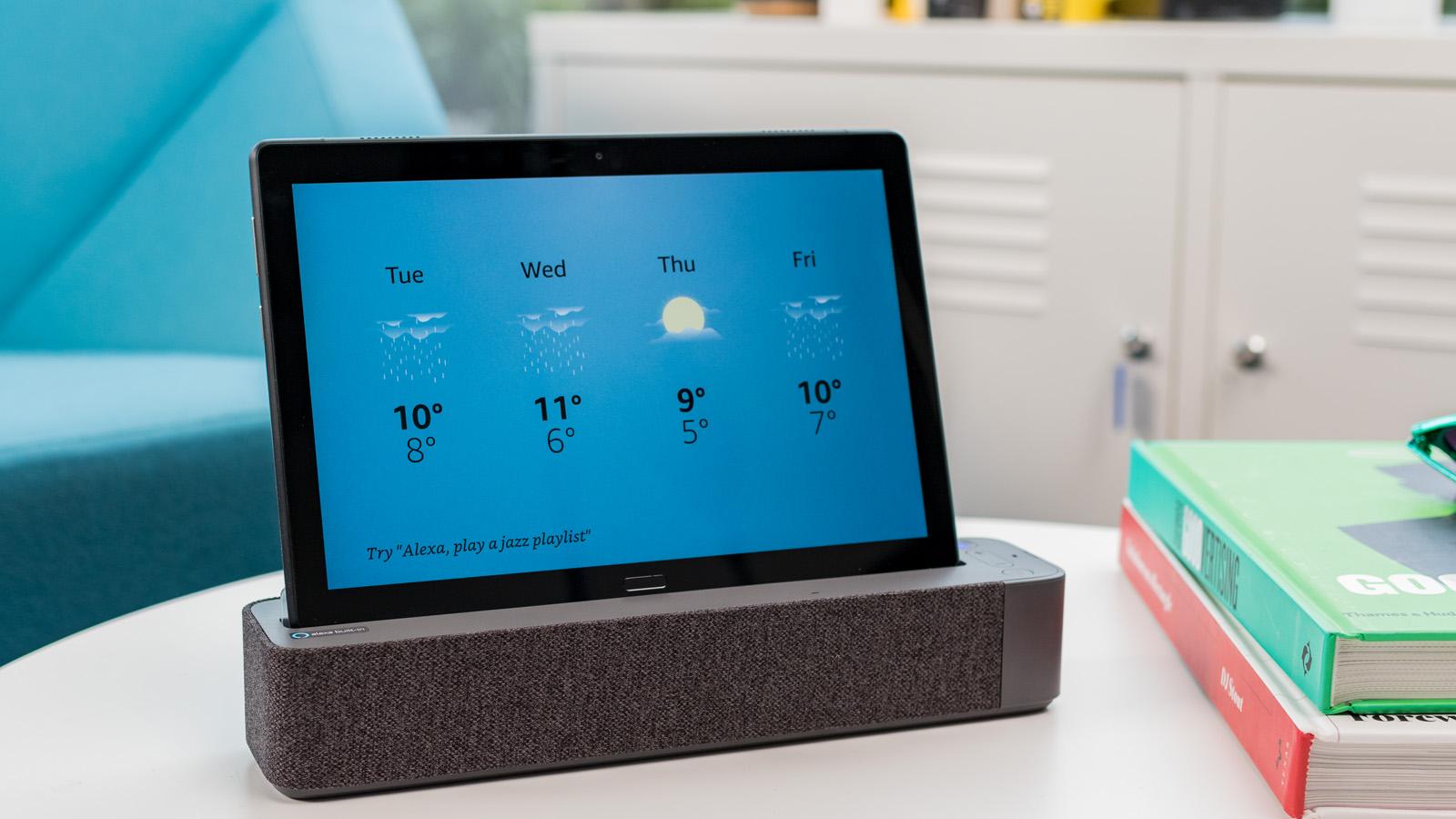 The Smart Tab P10 is ultimately a fairly budget tablet, with lightweight specs, old software, and a simple feature set, masked in part by slick-but-simple design that leaves it looking and feeling more premium than it really is.

The included speaker dock automatically activates a dedicated mode for Amazon Alexa, turning the tablet into a makeshift Echo Show while it’s docked.

Without the dock the P10 would be fairly unremarkable, so it’s really only worth buying if the idea of a tablet that doubles as an Echo Show really speaks to you, or if you know you’ll make use of the dock’s built-in speaker, rather than simply connecting it up to another sound system anyway.