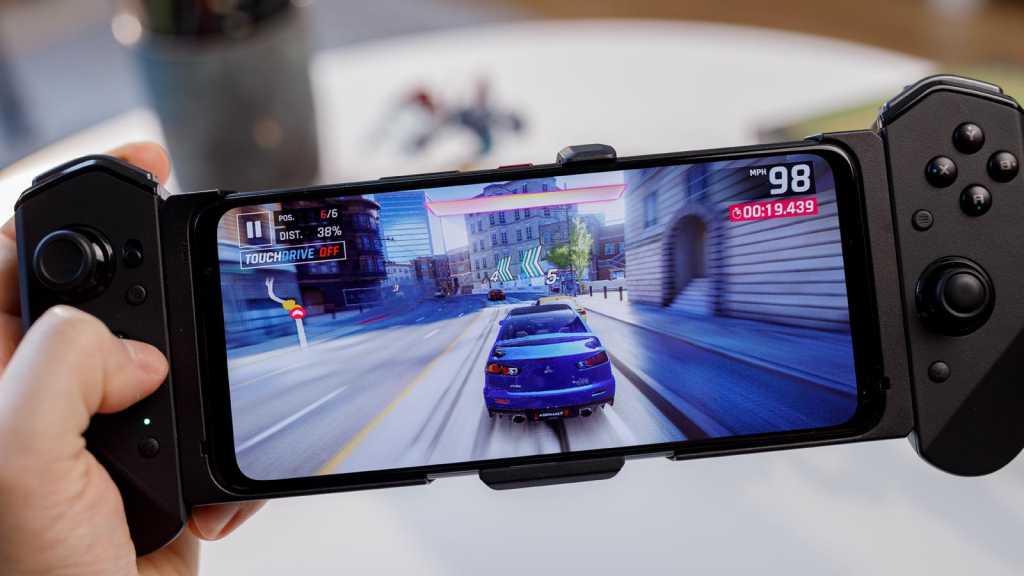 Gaming on phones has been a thing ever since we all first booted up our Nokia 3310s for hours on Snake, before our iPhones became clogged with hours of Candy Crush Saga. But increasingly smartphones are becoming viable gaming devices alongside home consoles and these are the best ones you can buy.

Such is the power of modern smartphones. Gaming sensations like Fortnite and Call of Duty Mobile can thank their mobile platform and portability for ridiculous run-away success. And it’s no wonder considering the power inside the best smartphones around.

While the latest Apple and Samsung phones are capable of running the most demanding mobile games, the market is so popular that there are also dedicated gaming phones like the Asus ROG Phone 5, Red Magic 7, and Black Shark 4 Pro. Since there are only a handful like this, we’ve also included the odd ‘normal’ phones that also offer a good gaming experience.

Below are our recommended best phones for gaming. Take some time to consider which has the best features at the best price for you, for the games you want to be able to run. 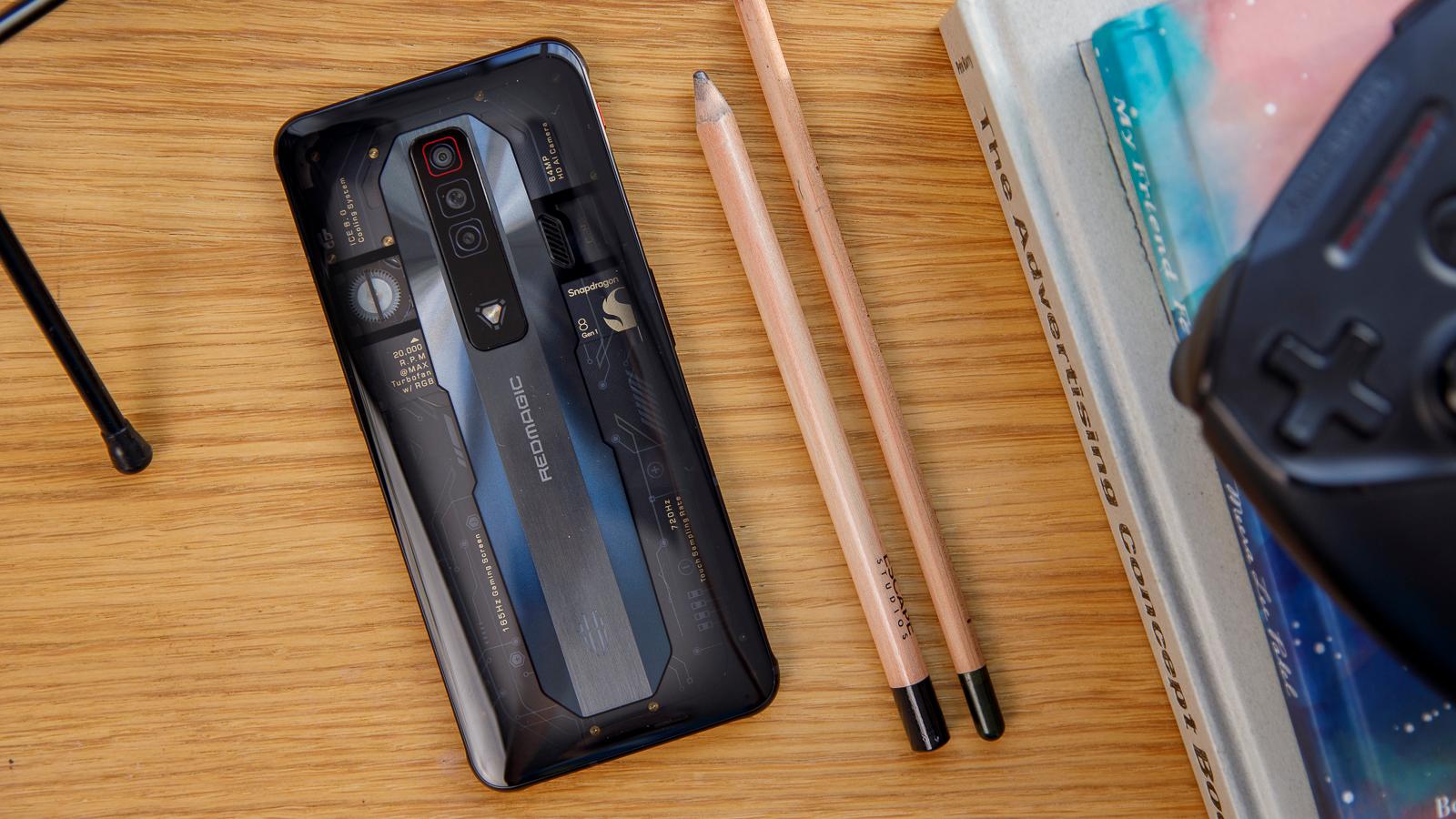 Nubia’s Red Magic smartphones have a reputation as having some of the best gaming-focused displays around, and that’s just as true with the latest in the collection, the Red Magic 7.

At its heart is a fast 6.8in 165Hz OLED panel with an impressive 720Hz touch sample rate that beats practically every other smartphone on the market. Though you might not notice much of a difference in real-world performance, it’ll certainly satisfy the need for gamers to have the best of the best.

There’s also a plethora of gaming features including side-mounted shoulder triggers, advanced haptic feedback and the ability to control performance on a per-game basis, and it’s all presented in Red Magic’s ‘Game Space’ mode.

The rear-facing triple camera setup remains unchanged from the Red Magic 6S, which in itself was the same as the Red Magic 5S, but software improvements mean it fares a little better this time around.

The only real disappointment is battery life; it’s smaller than that of its predecessor at a rather average 4500mAh, and combined with a 165Hz display, it drains much more quickly. 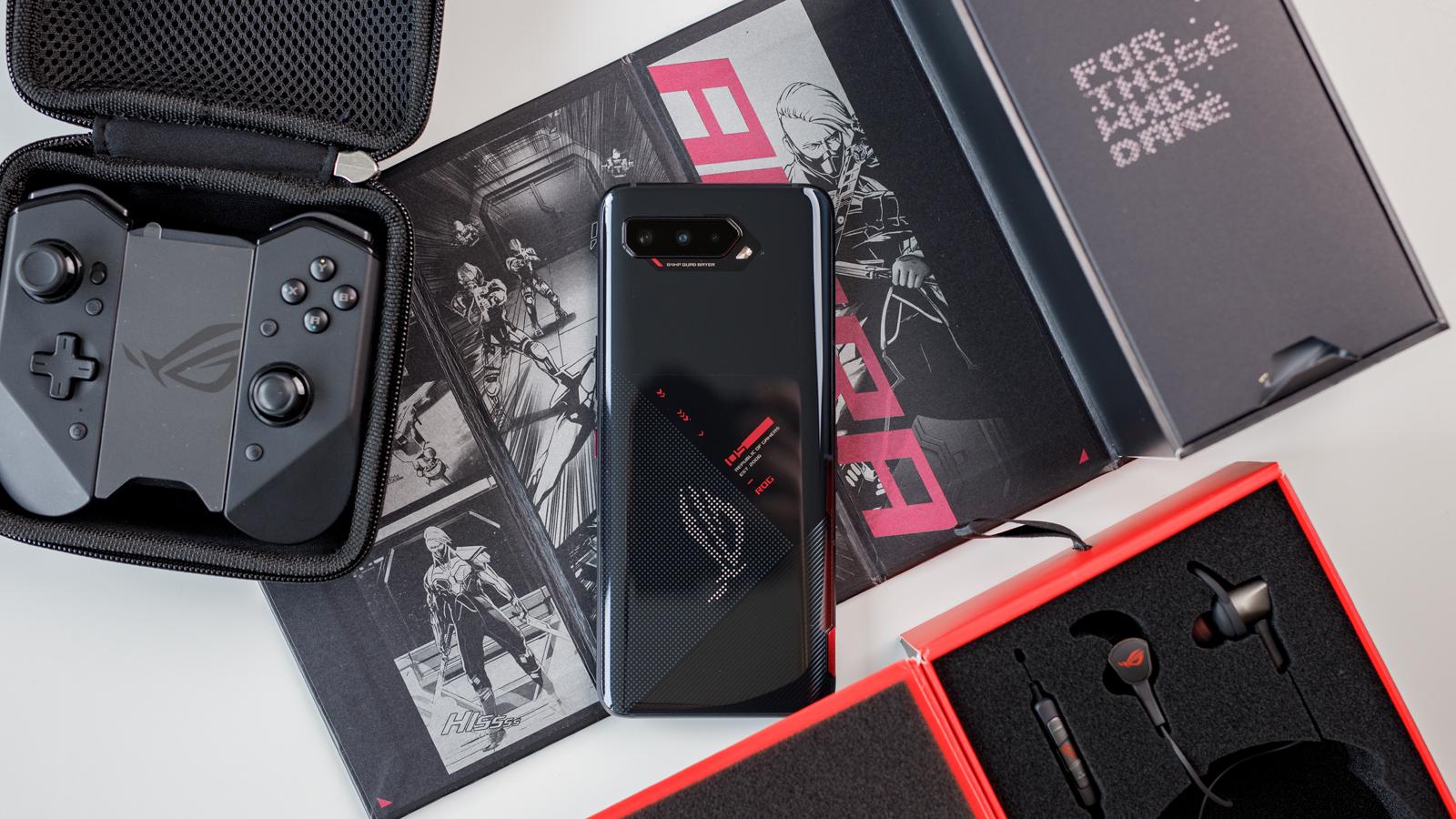 The Asus ROG Phone 5 might not have mass appeal, with a bulky, gamer-esque design, but that’s not the aim here.

Gaming is the priority here, and Asus has taken things up a notch with a 144Hz AMOLED screen, two 3,000mAh batteries, last year’s top-end Snapdragon 888, and up to an eye-watering 16GB of RAM. It can handle just about any game available on Android right now, with enough power left over to future-proof the phone for quite some time – all at a price cheaper than big-name flagships.

The gaming experience is further enhanced by haptic triggers built directly into the side of the ROG Phone 5, and if you want to take things a step further, the plethora of official accessories – including Nintendo Switch-esque Kunai 5 controllers and the fan-powered AeroActive Cooler 5 cooling system – should be right up your street.

They’re not related to gaming, but even the cameras are decent, which is unusual for a gaming phone. We can only really complain about the size and weight, measuring in at 10.3mm thick and 238g, but that’s not so applicable in the gaming sector.

3. Poco F4 GT – Gaming phone that doesn't look like one 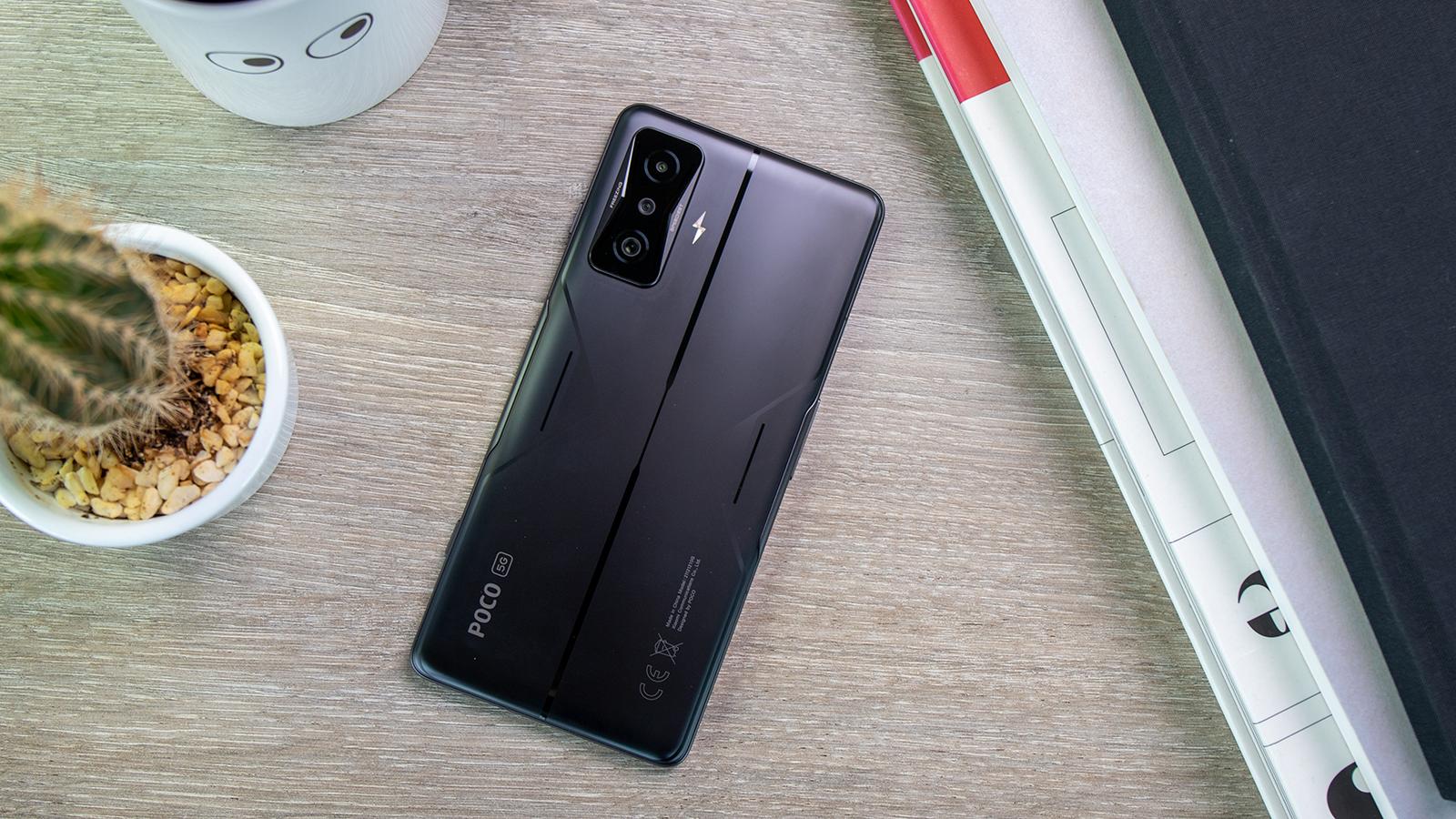 The Poco F4 GT is an attempt to build a gaming phone that could be just as appealing to non-gamers.

But the restrained design means this won’t scream ‘gamer’ to everyone who sees it, and the shoulder buttons double up with extra functions outside of games – a camera shutter button, for example. 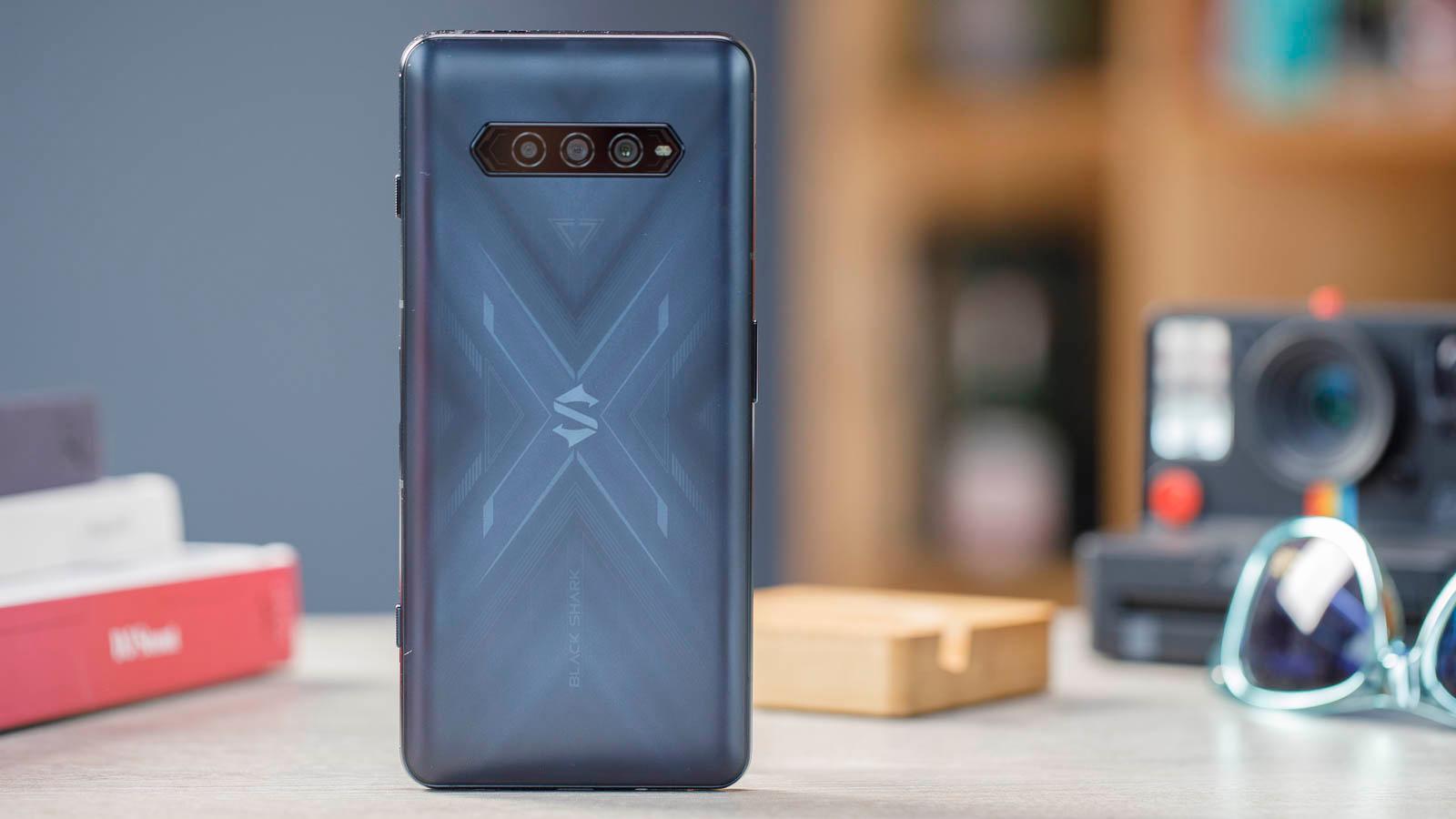 The Black Shark 4 Pro is an interesting prospect because it was announced in March 2021, but didn’t get an international debut until 2022. That means its specs, including a Snapdragon 888 and 8/12GB of RAM, can’t quite compete with 2022 gaming phones like the Red Magic 7.

But, while it can’t match other gaming phones in benchmarks, general performance is solid thanks to a combination of a 6.67in 144Hz AMOLED display (with the same 720Hz touch response as the Red Magic), an intricate cooling system and, most importantly, pop-up triggers.

Unlike the touch-based triggers of the Red Magic 7, the Black Shark 4 Pro has magnetic triggers that pop up from the body of the phone for a more traditional controller experience, making for a great portable gaming experience without the need to carry additional accessories.

While it doesn’t boast the best battery life around with a 4,500mAh battery at its heart, the 120W fast charging tech provides 0-90% in just 15 minutes – and unlike rivals, there’s a 120W fast charger included in the box.

So, while it’s not quite the most powerful gaming phone on the market, there’s still a lot to love about the Black Shark 4 Pro in 2022. 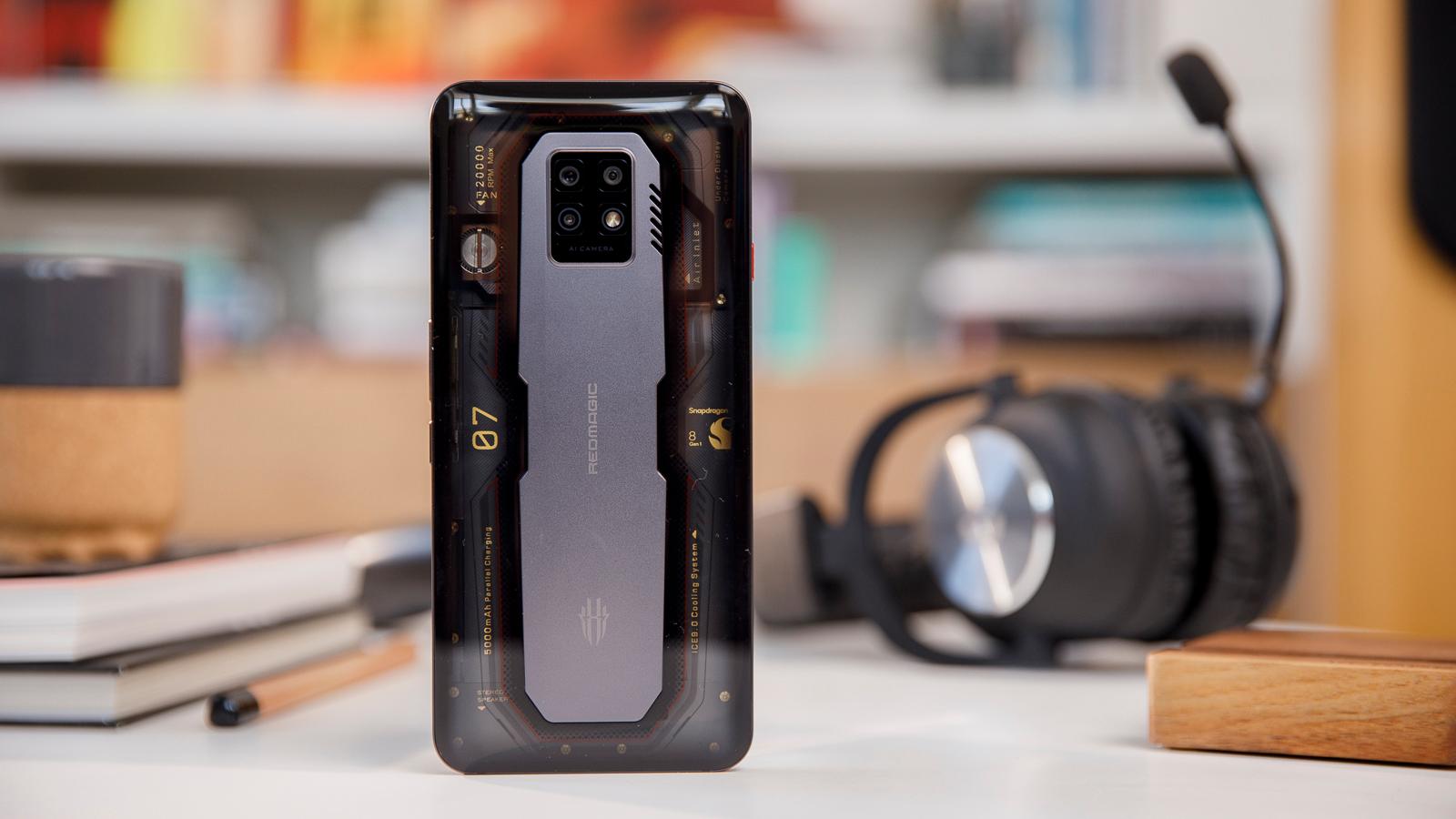 The Red Magic 7 Pro is an unusual phone, not least because it’s not an upgrade on the regular Red Magic 7 in every respect – and in fact we’d recommend the regular model to most people.

The changes here are mostly in the display. The first is that the 7 Pro comes with the most responsive display in any phone right, registering touch input at 960 Hz – i.e. it can detect touches 960 times a second. That’s literally a game-changer, but it brings a drawback: the screen refresh rate is ‘only’ 120Hz, down from the 165Hz of the regular 7.

The other change is the inclusion of an under-display selfie camera. This helps keep the 7 Pro compact and gives you a gorgeous full-screen experience, but again there’s a trade-off: your actual selfies won’t be all that great, with a soft, over-processed look to them.

This packs plenty of power and delivers on battery life too, but with a hefty price tag consider carefully if you really need the upgrade from the Red Magic 7. 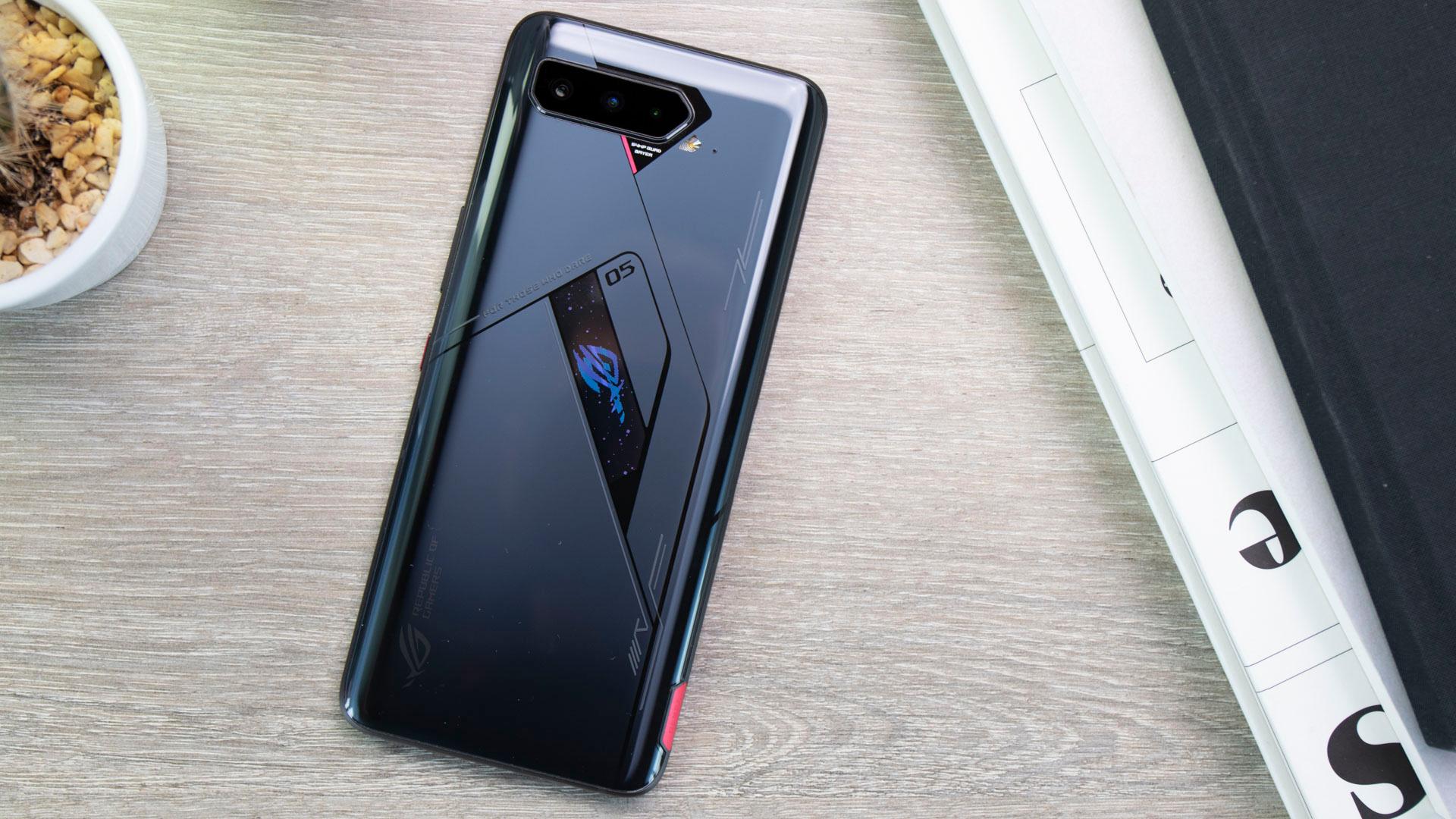 The Asus ROG Phone 5S Pro is arguably the ultimate gaming phone – but you’ll have to pay for it.

Performance is the priority here, though the phone is powered by the Snapdragon 888+ chip – once the most powerful around, but now supplanted by the 8 Gen 1.

Specs elsewhere are supreme though, with a 144Hz AMOLED screen, 6000mAh battery, and up to a market-leading 18GB of RAM.

It also features a unique PMOLED screen on the rear of the phone, used to indicate incoming calls, notifications, and charge state.

The problem is the price; it’s way too expensive when compared to the likes of the Red Magic 7 and Red Magic 7 Pro available in 2022, which cost almost half the price but offer similar – if not improved – performance, with improved specs and faster displays too.

It’s a great high-end bit of kit, but there are plenty of gaming phones that’ll give you more bang for less buck in 2022. 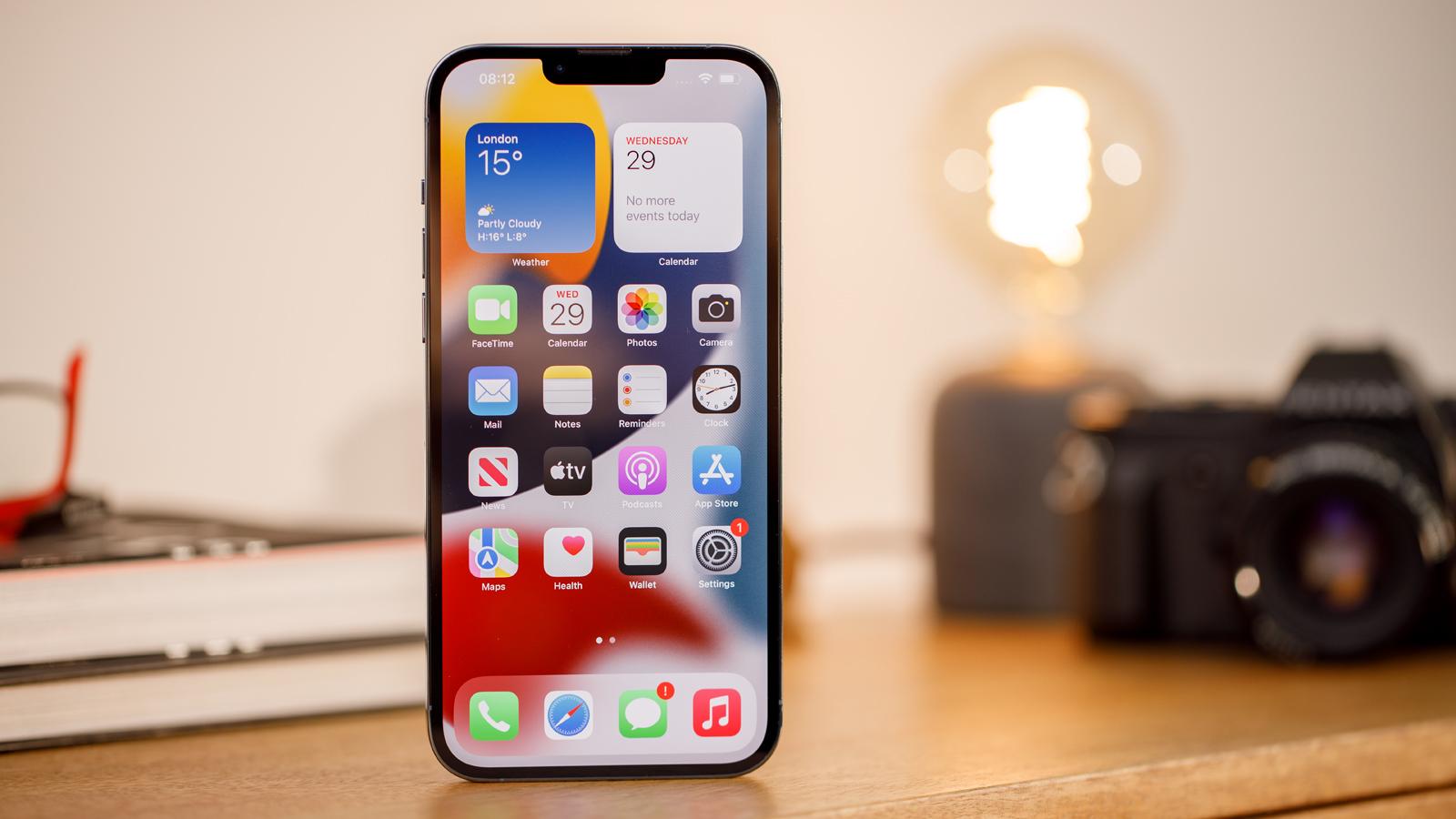 When it comes to gaming on iOS, the 6.7in iPhone 13 Pro Max is the one to beat. Apple’s 5nm A15 Bionic is one of the most powerful chipsets on the market right now and can handle just about anything you can throw at it without a hint of stutter or lag – and our benchmarks back that up too.

It’s also one of the first iPhones to make the jump to a variable 120Hz refresh rate, offering the buttery-smooth refresh rate – and improved response time – that make Android rivals so strong.

There’s also up to a whopping 1TB of storage available, so you can carry an entire library of mobile games in your pocket, and the battery life is the best of any iPhone to date for longer play sessions.

The catch? It’s on the expensive side, and you don’t even get a charger in the box. 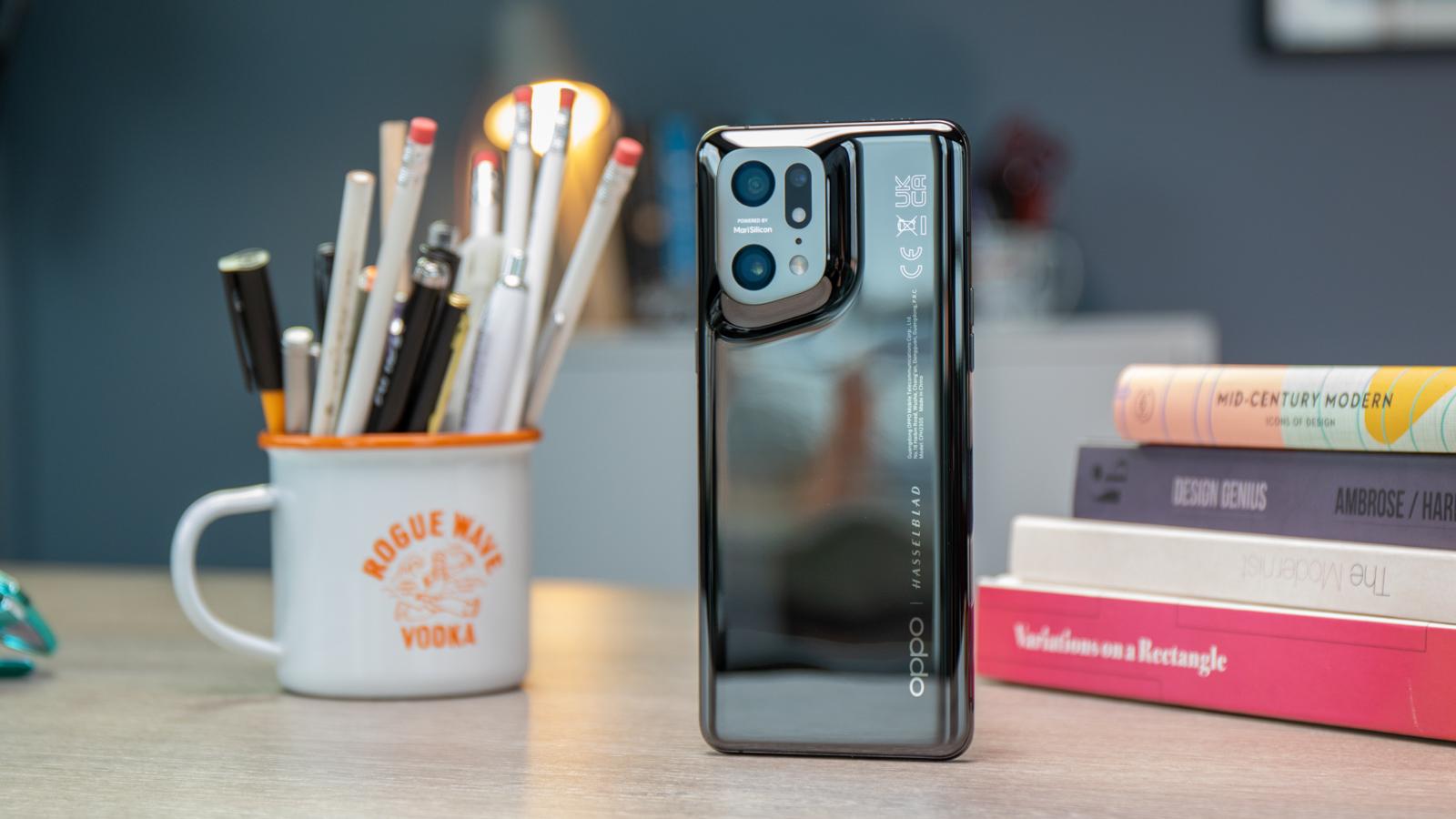 Though Oppo’s top-of-the-line Find X5 Pro doesn’t look like much of a gaming phone – in fact, at 8.5mm thick and 218g, it’s fairly lightweight compared to the likes of the ROG Phone 5 – but the svelte flagship has a surprise or two up its sleeves.

It’s powered by Qualcomm’s top-tier Snapdragon 8 Gen 1 with 12GB of LPDDR5 RAM and 256GB of storage, with benchmarks detailing an impressive device able to take on dedicated gaming phones. There’s also the 6.7in LTPO AMOLED display to consider, with a WQHD+ resolution and buttery-smooth 120Hz refresh rate providing a responsive gameplay experience.

Gaming prowess aside, it has all the bells and whistles you’d expect including 80W fast charging that’ll get you 94% charge in 30 mins, and a triple-camera array provides some of the most detailed images around – especially in low-light.

So, while you might not get built-in triggers or cool gaming-focused software enhancements, you’ll certainly get all the benefits of a flagship smartphone. 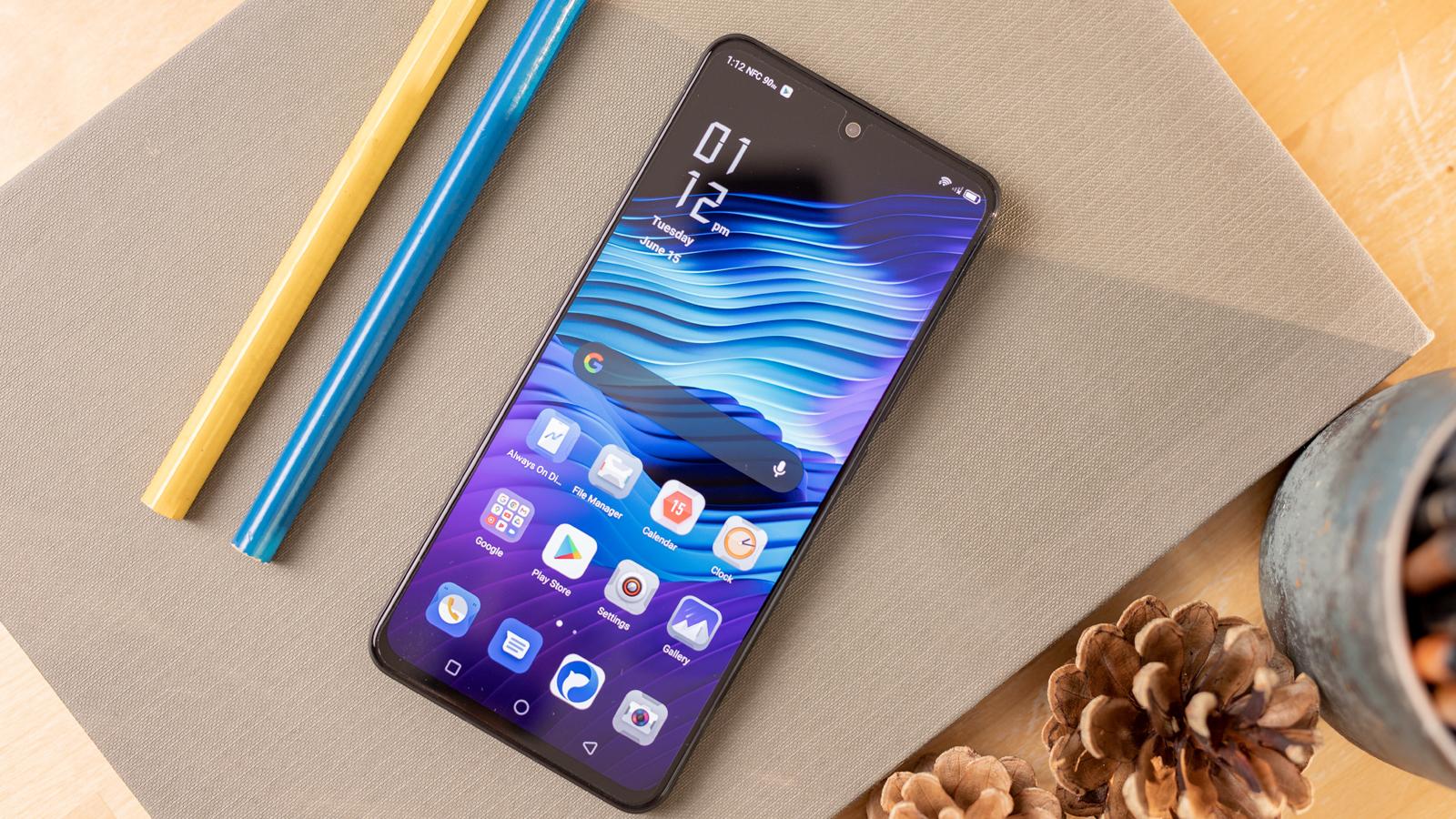 The Red Magic 6R is one of the cheapest gaming-dedicated smartphones on the market right now, but that doesn’t mean it skimps on features or performance.

Sporting a 6.67.in AMOLED display slightly smaller than that of the flagship Red Magic 6, you’ll find the same 1080 x 2400 resolution and 400Hz touch sampling rate. The 144Hz refresh rate may be slightly slower, but it’s still safely in gamer territory and the difference is negligible in real-world use.

Under the display you’ll find the powerful Snapdragon 888 with either 6GB, 8GB or 12GB of RAM depending on the variant you opt for. It’s capable of keeping up with flagship gaming phones in the performance department, but the lack of an active fan cooling system means it gets hot much quicker than premium alternatives.

The only real disappointment is battery life, with a 4200mAh battery only able to provide all-day usage if you drop the refresh rate from 144Hz to 90Hz.

Still, if you can look past battery life issues, the Red Magic 6R offers a premium mobile gaming experience at an affordable price. 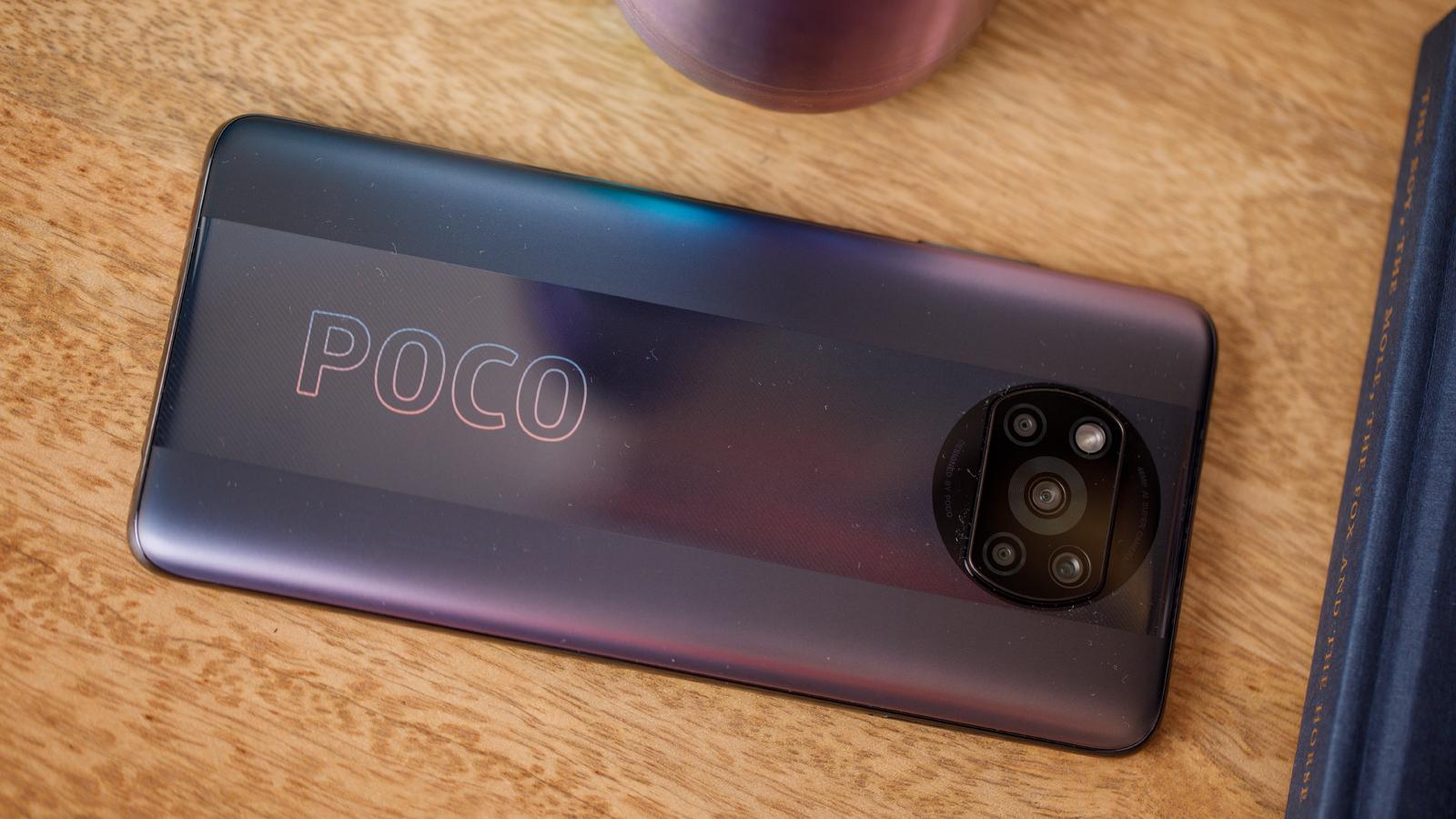 Xiaomi’s Poco X3 Pro may not be a dedicated gaming phone, but it has built on the success of the popular Poco X3 NFC to provide fast performance without the price tag.

The headline feature is the inclusion of the Snapdragon 860, an impressive feat when you consider the budget nature of the X3 Pro. That’s coupled with 6- or 8GB of RAM and up to 256GB of storage, and the 6.67in LCD panel offers a boosted 120Hz refresh rate and a 240Hz touch response rate.

The whopping 5160mAh battery is more than enough to get you through an intense gaming session or two, and while 33W wired charging isn’t the quickest available, it’s still pretty nippy.

The Poco X3 Pro might not be quite as capable as some of the dedicated gaming options in our chart, but it certainly offers bang for your buck when compared to similarly priced smartphones available right now.

Do you need all the highest specs?

These phones often have specialised hardware or even sometimes clip-on controllers to help you game better. Internals often have boosts in RAM or the most powerful CPU or GPU to help the phone keep up, while high refresh rate displays are common to allow you to hit even higher frame rates while playing. A couple even have liquid cooling.

Specs are pretty important if you want to game to the highest level on a phone, but it does depend on which games you want to run smoothly. If you are more into arcade or puzzle games then you might not need to splash out on a high-end gaming phone.