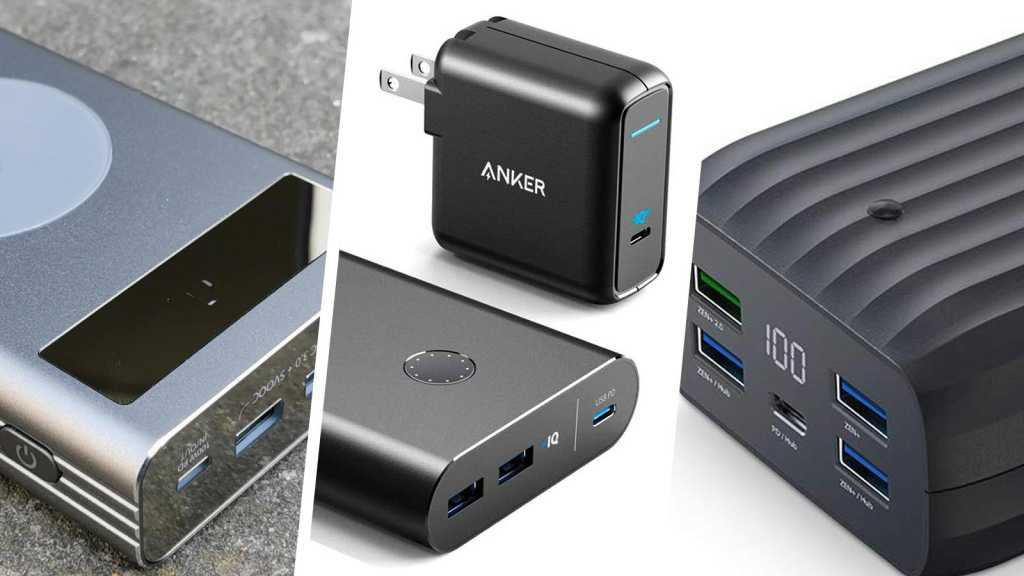 Laptop power banks are super useful for any time you need to work away from mains power.

When searching for a power bank to charge a laptop or console, you need to keep two things in mind: can it deliver enough power to charge my device, and is the battery capacity high enough to give the battery a reasonable boost?

Laptops and consoles will not charge over a standard USB port: you need one equipped with Power Delivery. These can output up to 100W, but exactly how much you need depends on how much power is required by your device. 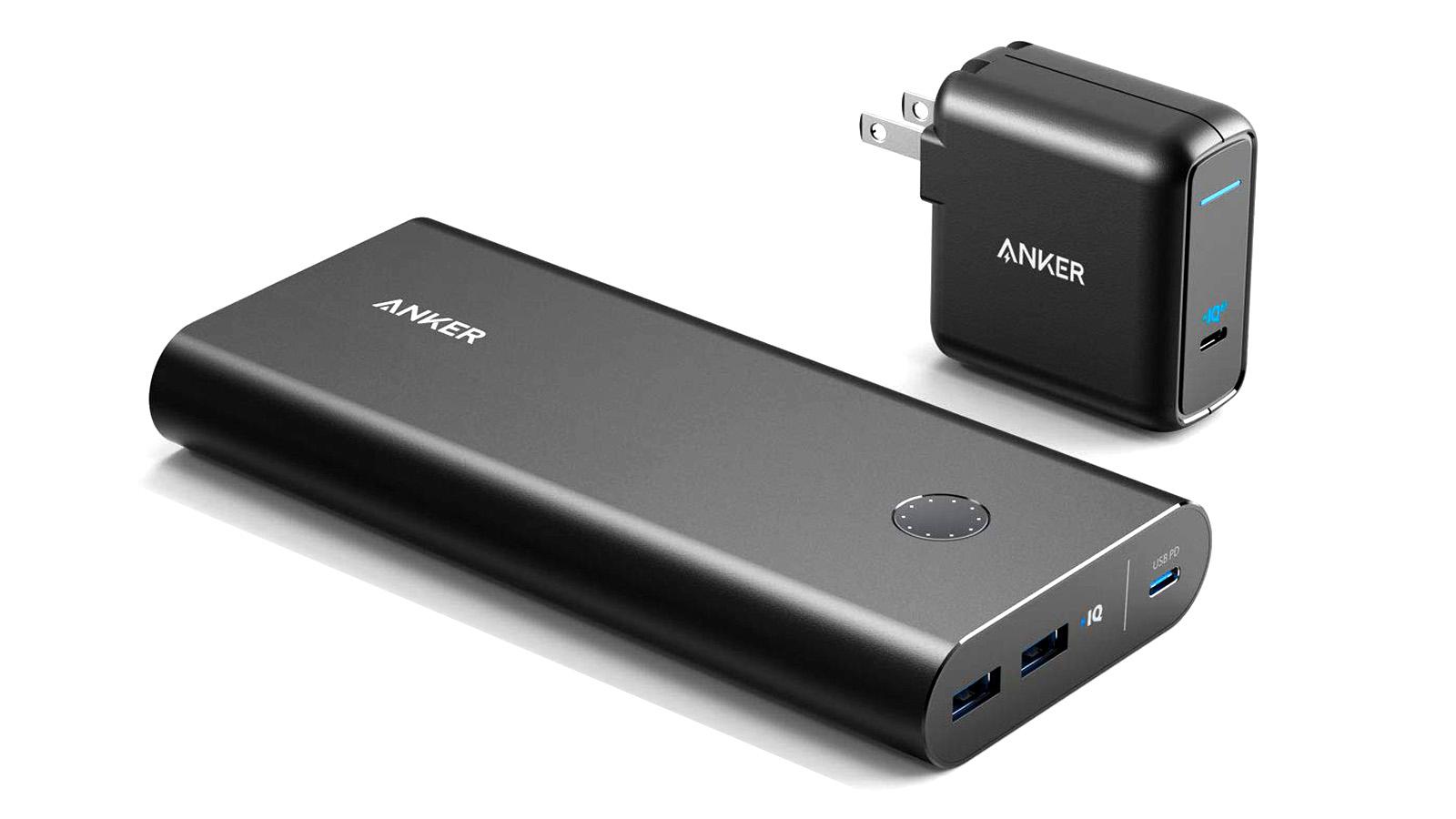 This Anker PowerCore+ is a 45W PD power bank with a generous 26,800mAh battery capacity, supplied with a 60W PowerPort Atom III USB-C PD charger, which makes it fantastic value.

The Atom III is useful as a replacement mains charger for your laptop, but also for recharging the power bank itself, which is possible in just four hours – incredible for a power bank of this capacity. Of course, if you already have one, you probably don’t want to buy another.

The design is typical Anker and, although it’s a little basic, it’s impossible to fault. The rectangular brick-like device is, as you might expect, incredibly big and heavy (180x80x24mm and 580g), but its metal body and completely rounded edges make it seem much less offensive.

The PowerCore+ is undoubtedly well-made, and feels like a product that will last. It is also supplied with a mesh carry case and a USB-C cable, making it easier to carry together all the necessary attachments for charging your laptop. 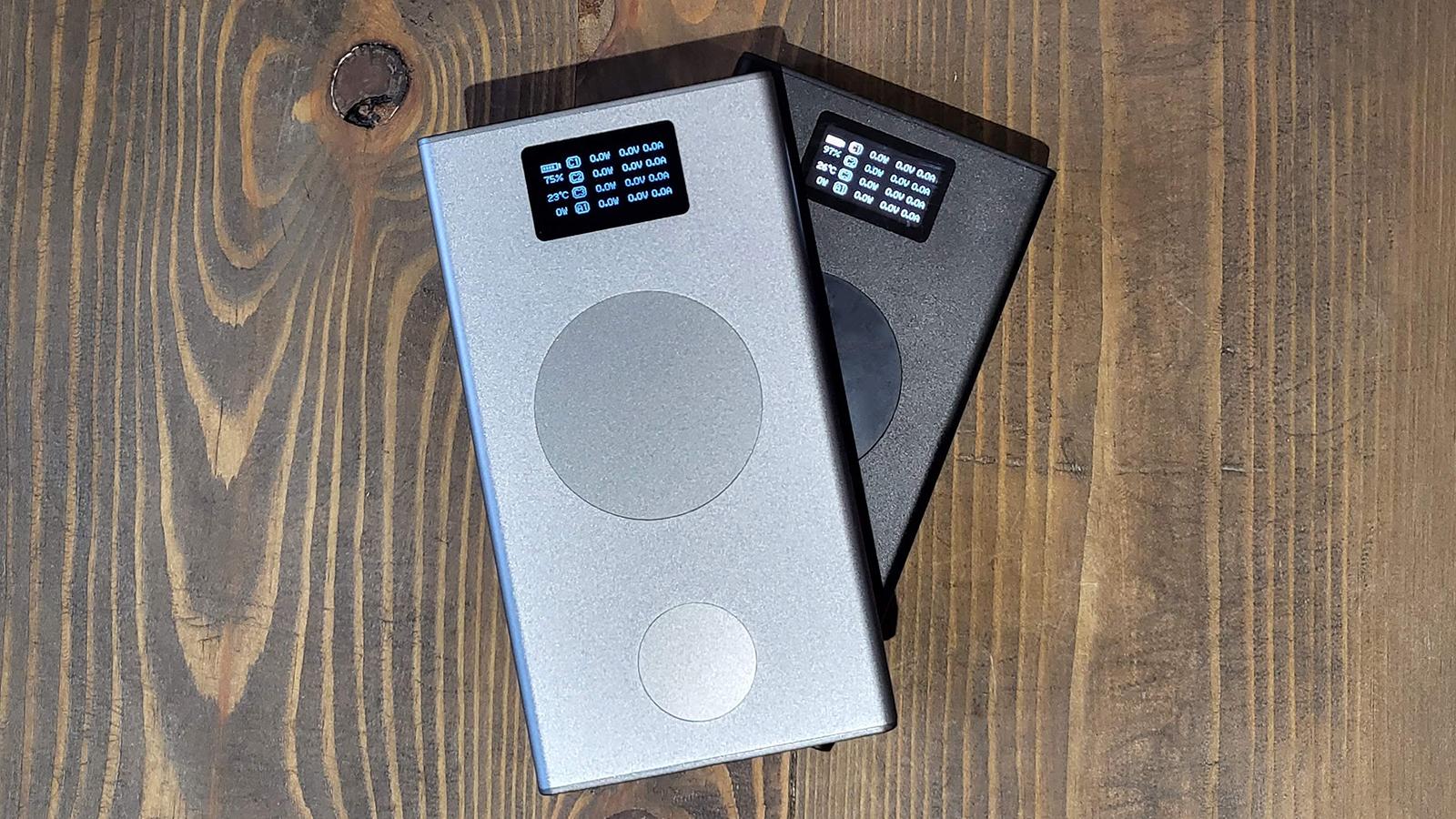 An upgrade on the Flash 2.0 listed below, these graphene-composite power banks are able to charge cooler than ordinary lithium-polymer batteries, and thus can do significantly faster: you’ll get to 80% of these 25,000mAh batteries in just 45 minutes.

Down sides include an expensive price tag, and a bulky, heavy design, but for sheer performance and functionality the Chargeasap banks are among the most capable we’ve ever tested. 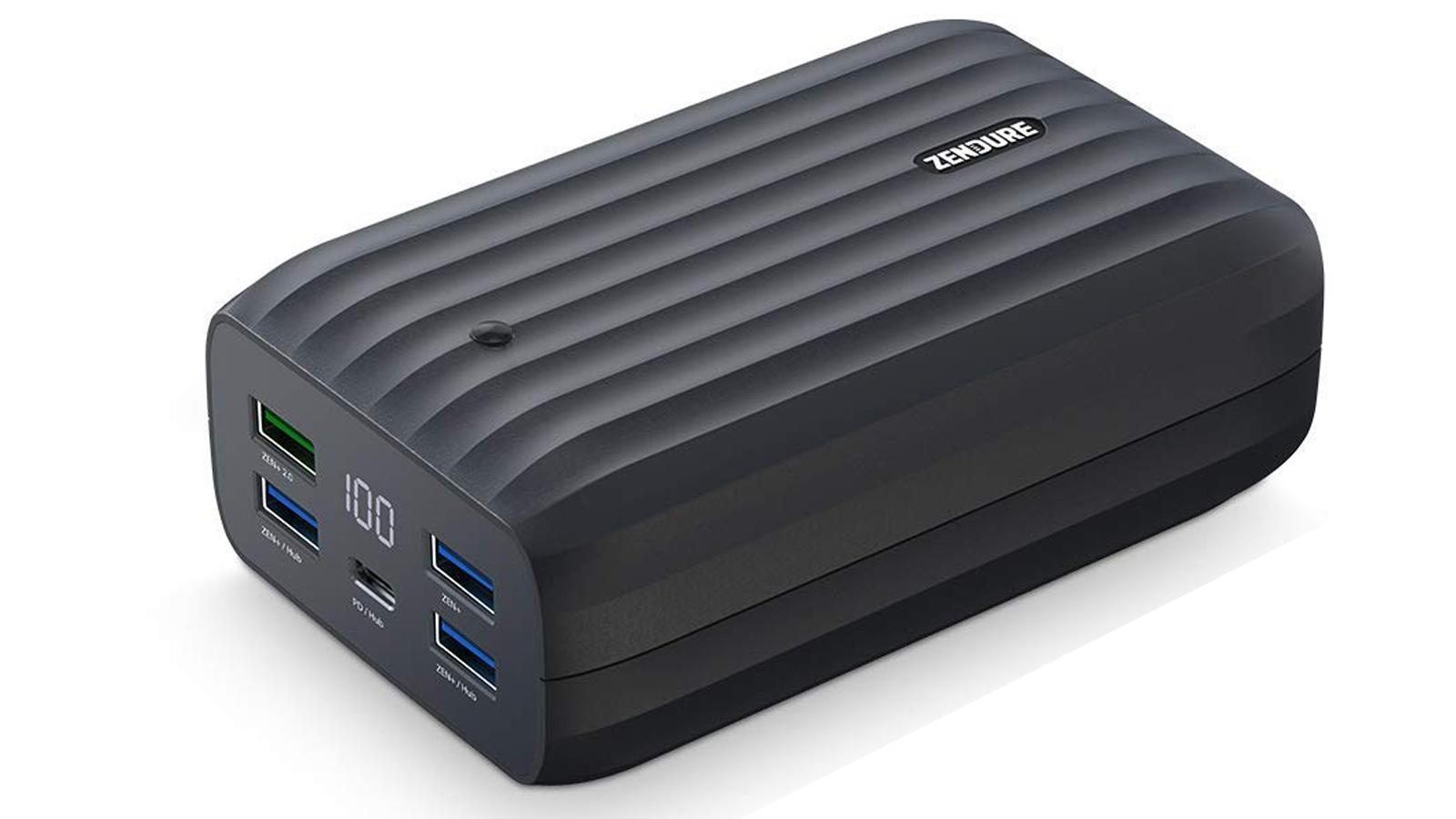 A 45W USB PD power bank from Zendure, this X6 has the added functionality of performing as a USB hub while connected to your laptop. And it builds in an LCD readout of exactly how much power remains and four full-size USB outputs, one of which is Quick Charge 3.0-compliant.

Looking a little different to previous Zendure power banks, its softer design is still as tough and rugged as they come. There’s a 24-month manufacturer’s warranty for peace of mind, too.

In common with all Zendure power banks, there’s also passthrough charging, incredible six-month standby, higher-than-average 80 percent efficiency and Zen+ tech that can deliver the optimum charge for your device.

The USB hub functionality is supported on two of the full-size outputs, offering data transfer at speeds of up to 480Mb/s. All four USB outputs can also provide power, with one at 18W and the other three at 12W, sharing a maximum output of 45W. 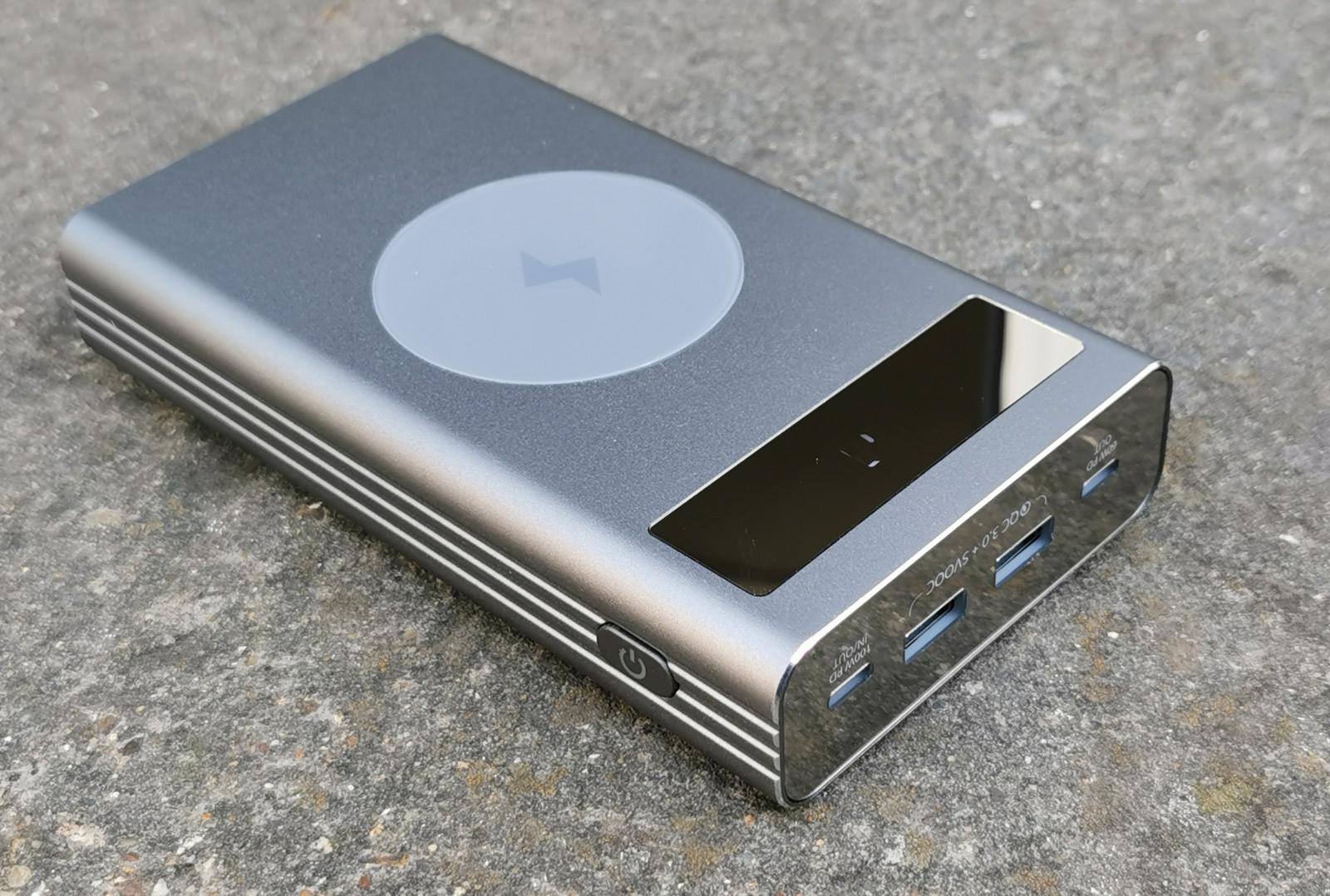 This is a beast of a power bank. It uses Panasonic graphene composite batteries which the Chargeasap says are also used in Teslas. They’re fast charging without heating up a lot and can handle 2000 charge cycles, so the only drawback is the price which is, admittedly, steep.

However, look at what you get: a USB-C port with 100W output for charging your MacBook or another USB-C laptop, a second USB-C port offering 60W and two USB-A ports which support Huawei’s 22.5W Supercharge, 18W QC 3.0 and Apple fast charge and Oppo / OnePlus Super VOOC (40W).

On the top surface is a 10W wireless charging pad which will charge Qi-compatible phones, as well as headphones such as AirPods, and it will even charge your Apple Watch thanks to a dedicated 2.5W coil.

With the four ports and wireless pad, you can charge five devices simultaneously.

When the 20,000mAh capacity is depleted, the Chargeasap Flash 2.0 will recharge to 80% in just 35 minutes and a full charge takes 70 minutes. That’s assuming you have a suitably powerful 100W USB-C charger, of course: there isn’t one supplied in the box.

Lower-power chargers will still charge it, but not as fast.

This capacity can be taken on flights, and the aluminium-clad device weighs 500g. It comes with a mesh carry pouch and is covered by a two-year warranty.

Expect around 70% efficiency, which means a usable capacity of 14,000mAh. That’s enough to charge an iPhone about five times, or a Huawei Matebook X Pro laptop from empty to around 85 percent.

We wish the capacity were a bit higher considering the price, but versatility is the highlight here.

How much power do I need?

Check the spec of the wall charger that you use to power the device at home. Ideally you’re looking for a figure in Watts, but it may be expressed in Amps and Volts, which you multiply together to get the rating in Watts. If you can’t find it here, check the specification on the manufacturer’s site or in the paperwork that came with the laptop.

If your laptop or console charges over a proprietary cable rather than USB-C then you can still charge your laptop using a power bank, but you’ll need to select a bank with an AC outlet to which you can physically plug in your laptop using its mains charger. In such a scenario the power bank simply steps in to replace your wall power outlet.

We’ve put together a range of articles to help you choose the best charging tech for the mobile devices you carry everywhere. You’ll also like: