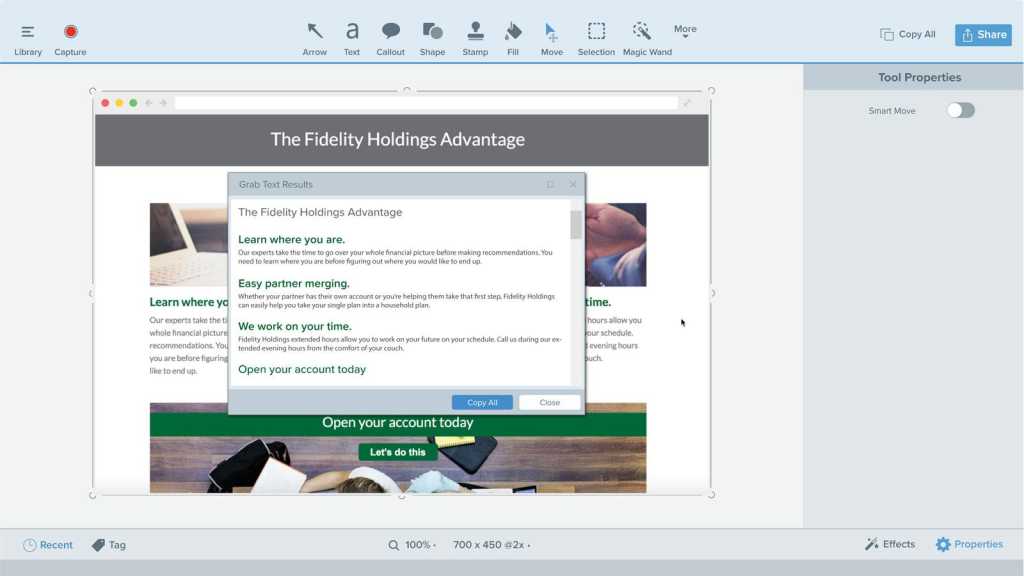 Sometimes you need to capture what’s on your computer screen to keep it for reference or share with someone. You could whip out your phone and take a photo, but if you want to preserve the original and best quality then you need some screenshot software.

Windows offers quite a few ways to take screenshots, and you’ll probably find a Prt Scr key on your keyboard which will grab the whole screen, but if you want precise control over the area you capture and you want to easily and professionally edit or annotate that screenshot then third-party software is the way to go.

Here is a selection of the screenshot software you should get.

This one is built-into Windows, and is different from the standard Print Screen key. It works exactly like most third-party apps and lets you draw a rectangle over the area to capture. It’s basic and doesn’t have many features, but it gets the job done.

You can choose from various options including a free-form snip and a time delay so you can capture things such as right-click menus.

It lacks the ability to crop or re-compose the area you’ve captured and although there is a pen tool, it’s hard to annotate or highlight anything with your mouse that doesn’t look like a child has drawn it.

Just search for ‘Snip’ in the start menu search box to find and launch it. 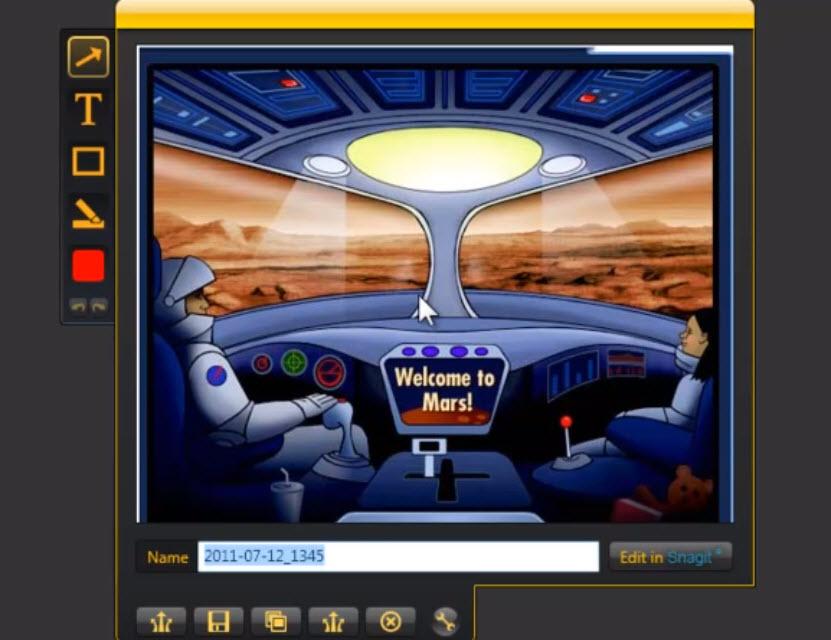 Jing is a free tool from TechSmith which also makes paid-for software including Snagit and Camtasia. It is essentially a very barebones version of SnagIt, allowing you to capture a region of the screen and either grab a screenshot or record a video up to five minutes long.

Like SnagIt, Jing displays the pixel dimensions of the region you’re capturing, which can be useful if you need to know such details.

You can add text and arrows to the captured image, and name it before saving it or sharing to Screencast.com.

Annoyingly, you can’t start using Jing until you’ve created an account at Screencast.com: there’s no way to bypass this. Still, given that it’s free and you get 2GB of free online storage to share screenshots and videos, it’s a tiny price to pay. 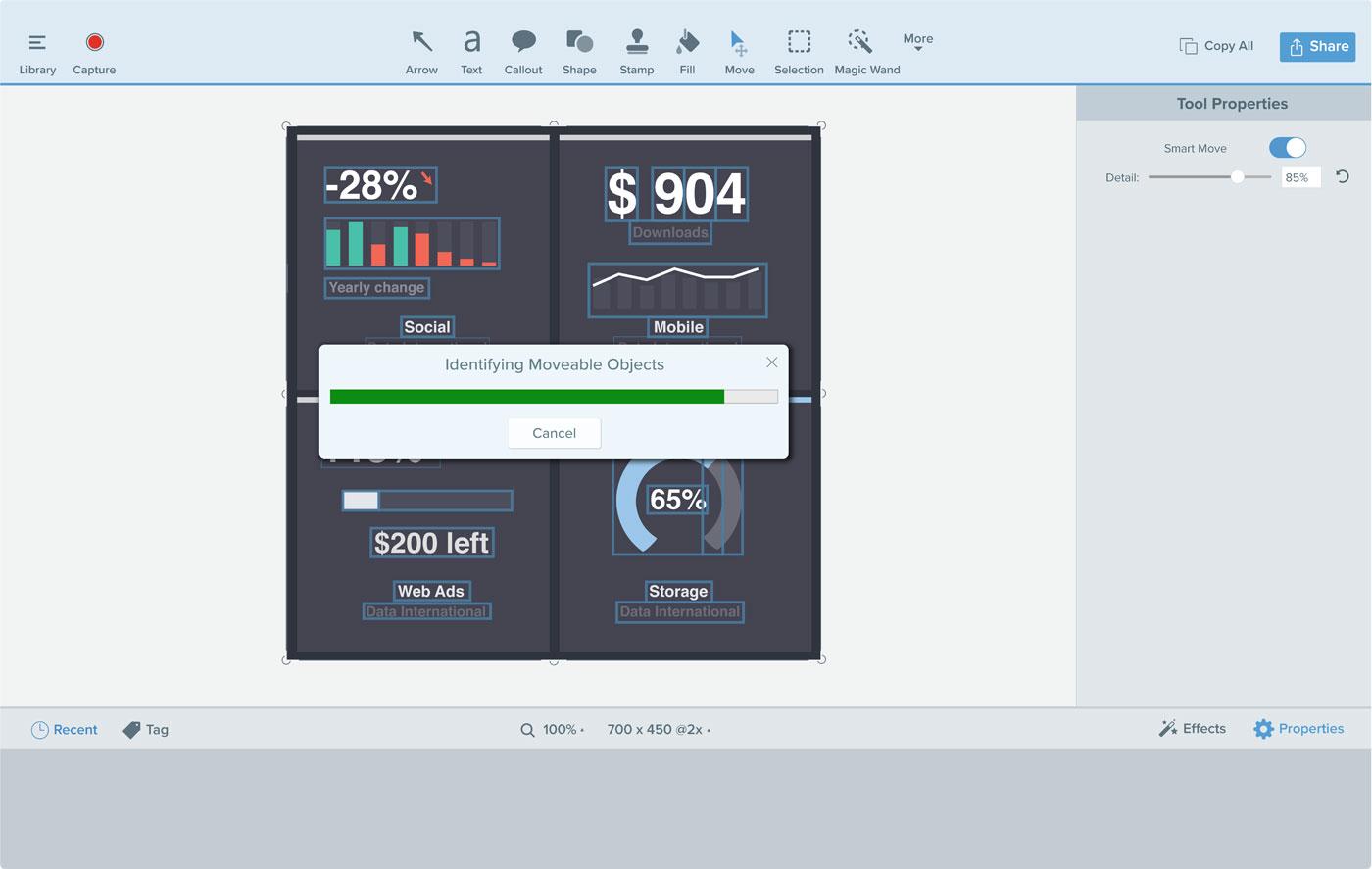 Currently on version 2018, SnagIt has been the go-to screenshot software for many people for many years. In fact, we at Tech Advisor have used SnagIt for taking screenshots for the past six years, so the images in this article were grabbed using Snagit.

Why is it better than Windows’ built-in screenshot tools? For three main reasons.

First, its all-in-one capture tool automatically selects areas on screen as you hover over them. This saves a lot of time if you take a lot of screenshots.

Second is its editor, which contains all your recent grabs and has a range of useful tools for annotating screenshots, highlighting elements and blurring out sensitive information. It also lets you resize your final image, which is invaluable if you need it to be a certain pixel width or height.

This new version has a nifty feature which detects objects in the capture and allows you to move them and even edit text from grabs.

Finally, it supports layers, so you can rearrange elements later on and re-save your screenshot without having to re-do all the work.

Impressively, Snagit is also a competent screen recorder, so given all these features, it’s well worth the very reasonable price. 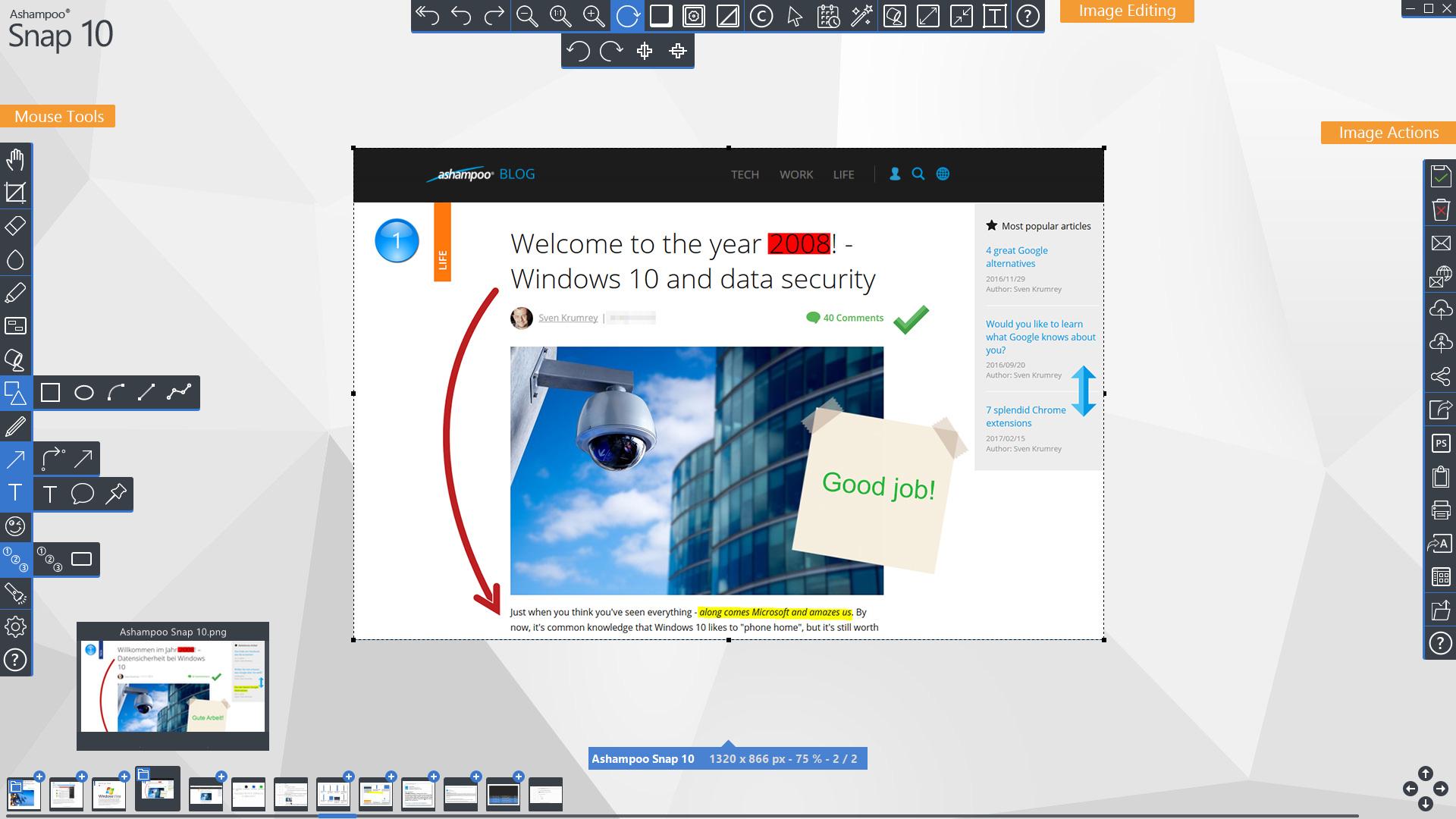 If you need more than merely capturing what’s on your screen, Snap 10 offers a similar set of tools to Snagit. You can select exactly which area you need, then add annotations, arrows and other things in the editor.

There are the features you’d expect from a paid-for utility: a timer function so you can capture right-click menus and other windows which disappear when you press the screenshot hotkey. Snap 10 can also auto-scroll to capture long web pages.

If you need watermarks, these can be automatically added, and there’s even a mode which captures all visible windows on the desktop as separate objects.

Like Snagit, there’s video capture tools as well, so you’re not limited to static images, and an OCR function which can make text in screengrabs editable.

If you take a lot of screenshots of websites, you can now get Snap 10 to automatically add the URL to the screenshot, or the file’s metadata.

If your laptop or PC has a compatible AMD graphics card, you’ll find that the latest drivers include screen capture tools, both for screenshots as well as recording gameplay videos.

To bring up the overlay, press Alt+R – this is the default shortcut. Click on ReLive and make sure it is enabled.

Then, when playing a game press Ctrl+Shift+E to take a screenshot. The images will be saved in the ‘Save Folder’ specified in the ReLive settings page. 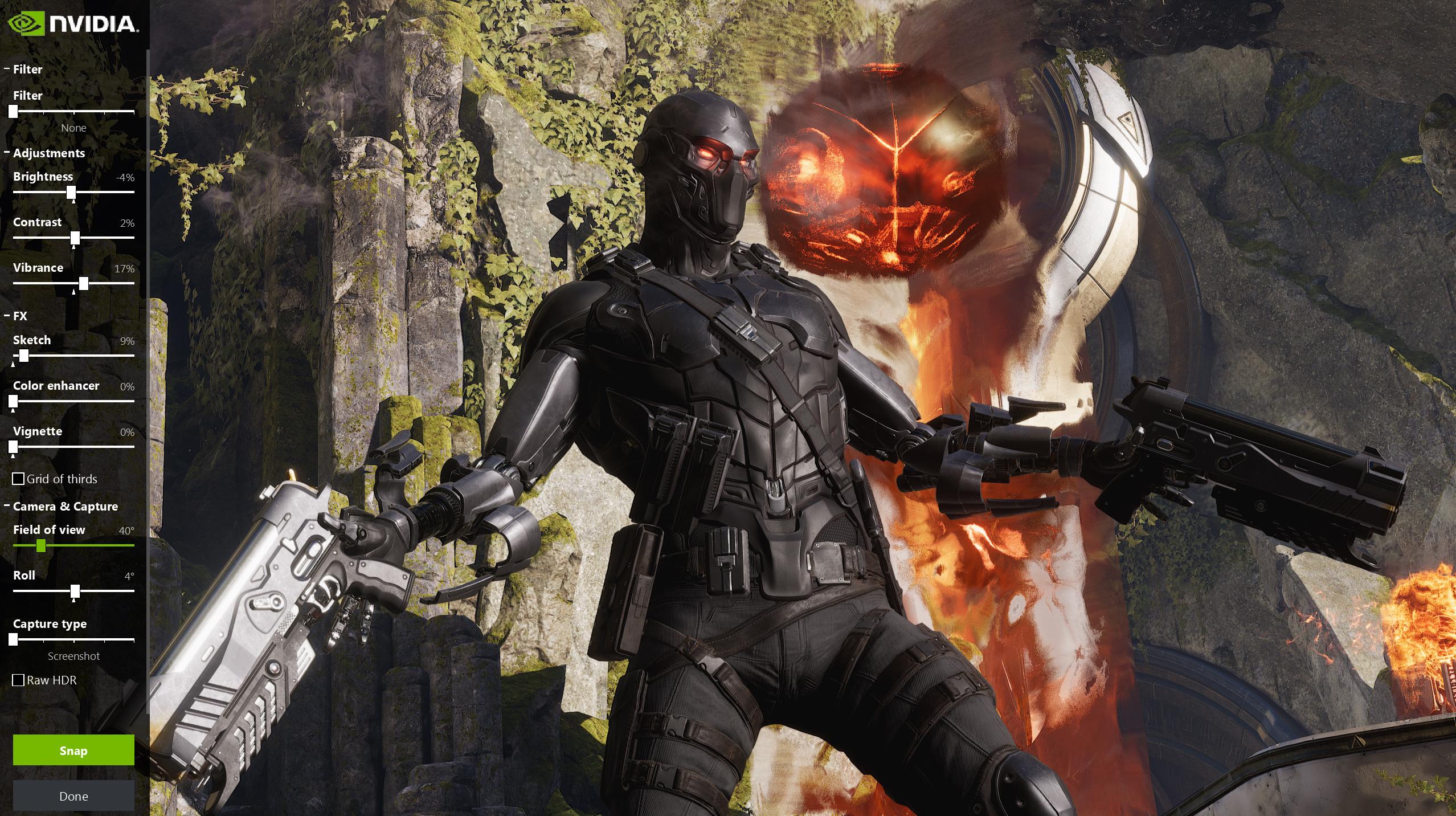 For those with supported Nvidia graphics cards back to around the GTX 680M, you will find great in-game screenshot support with Nvidia Ansel.

Ansel offers a whole lot more than simply the ability to capture the view on your screen. It allows you to compose the shot from any position – you’re in control of the camera, and aren’t limited to your character’s viewpoint. You can even capture in HDR and in 360, then view them on your phone, PC or a VR headset.