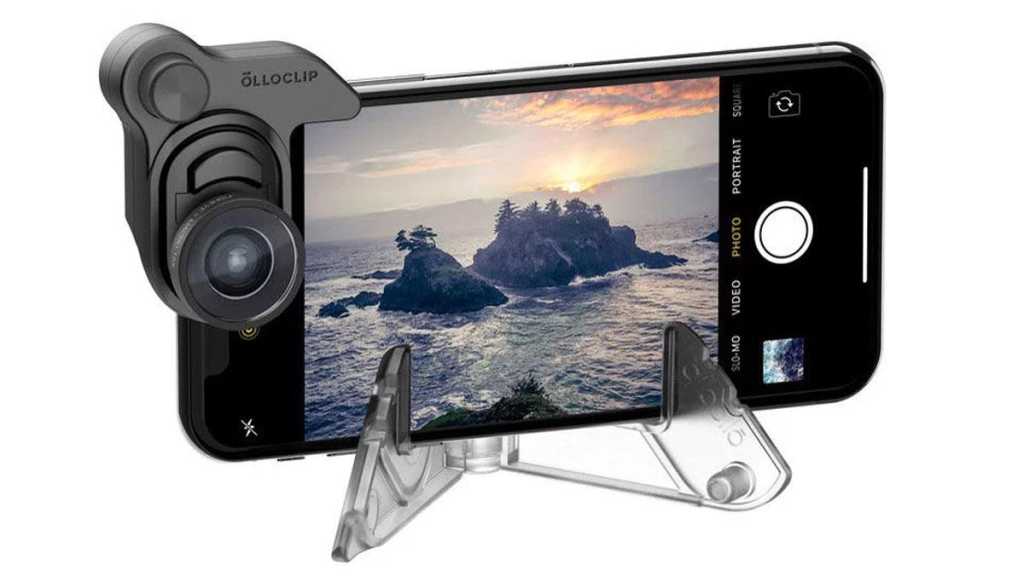 The cameras in phones get better each year, which means the quality of our photos and videos does too. But with these accessories you’ll be able to do even more, such as take up-close macro shots of insects and flowers, record smooth time-lapse footage of moving clouds and a whole lot more.

These are the accessories your phone needs.

Olloclip Core Lens for iPhone 8 and 7

Though not cheap, Olloclip’s lenses are excellent quality and are designed to work with specific phone cameras – in this case iPhone 8, 8 Plus, 7 and 7 Plus.

They clip on quickly and exactly so you don’t have to fiddle around trying to centre them on top of your camera’s lens as with cheaper, generic systems.

Cleverly they’re reversible so work on the front camera as well as rear. This set includes super-wide, fisheye and 15x macro lenses, allowing your iPhone to take photos that you simply cannot with the standard camera.

We found  the lenses to be very well built and produce extremely sharp photos.

Olloclip makes other sets for the iPhone 8 and 7, as well as all other iPhone models back to the iPhone 5 (and also for certain Android phones, too). 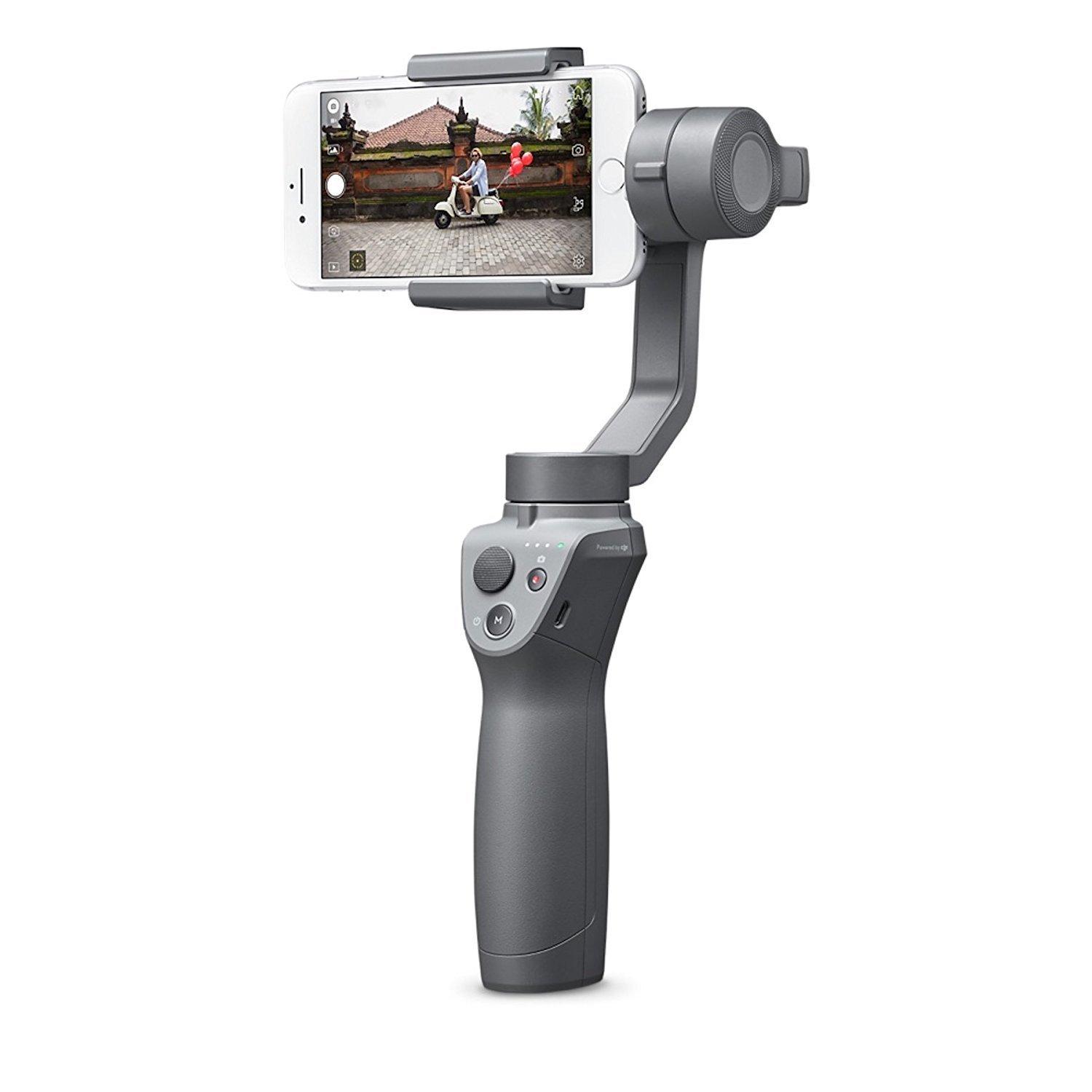 No-one likes watching shaky video. And it’s much worse when played back on a TV rather than your phone’s small screen.

But even if your phone has best-in-class stabilisation, you’ll still have to have incredibly steady hands to get video as smooth as the footage when using an Osmo Mobile 2.

You clamp your phone in the jaws and – using the companion app – this three-axis gimbal will iron out all those shaky hand movements for stable videos.

It’s also ideal if you need to record while walking; it’s a poor-man’s Steadicam. You can also lock the gimbal so the camera faces the same way: perfect for ‘slider’ shots.

Finally, Active Track uses software smarts to keep the camera fixed on a person or object in the frame, and it really works.

Gimbals such as this used to cost hundreds, so this second-gen model (which lasts even longer between charges) is an absolute bargain. 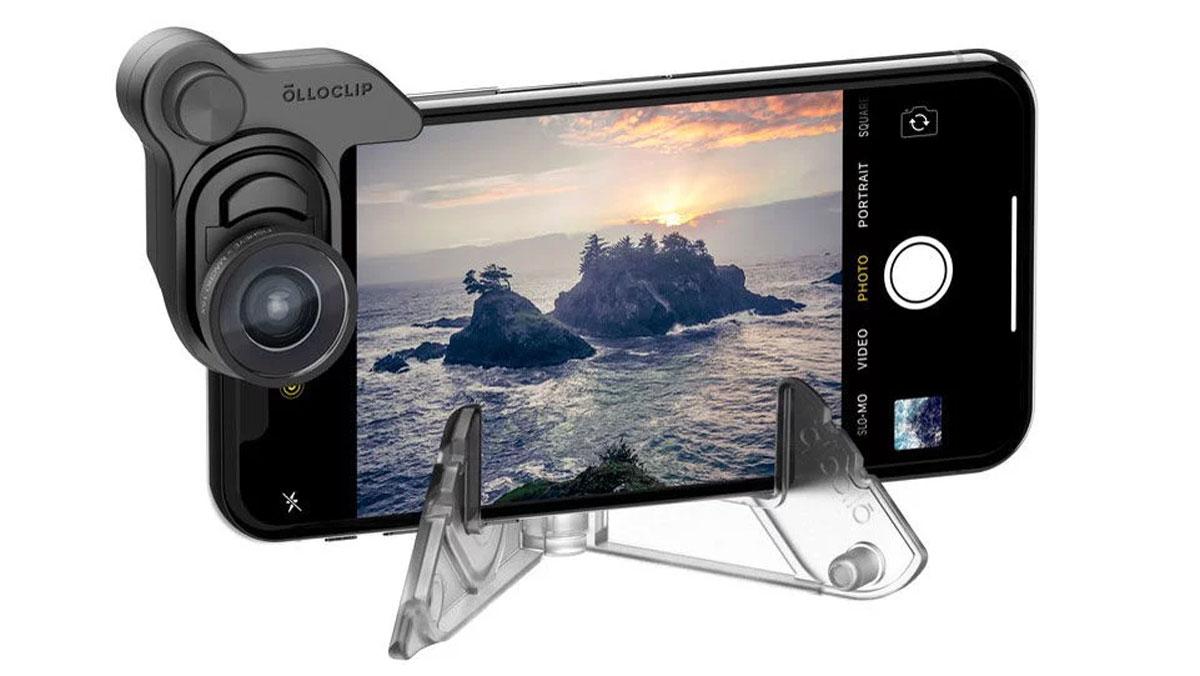 The iPhone X system shown above includes a pendant for carrying the lens which doubles as a stand for your phone, like a table-top tripod.

In the Mobile Photography Box Set, you get super-wide, fisheye and macro lenses. These can be used on both the rear and front cameras, and will attach to the iPhone X even if you’ve got a glass screen protector installed. Olloclip sells a slim case which is compatible with the lens system: most cases have to be removed before you can clip the lens on unfortunately.

Olloclip’s also sells a kit for the iPhone 8 and 7 (that also fits on the Plus models). This is reversible and works with both the front- and rear-facing cameras, so you can use the wide-angle lens to take a ‘grouphie’ without needing a selfie stick. When you unscrew the fisheye lens, there’s a macro lens underneath offering 15x magnification. 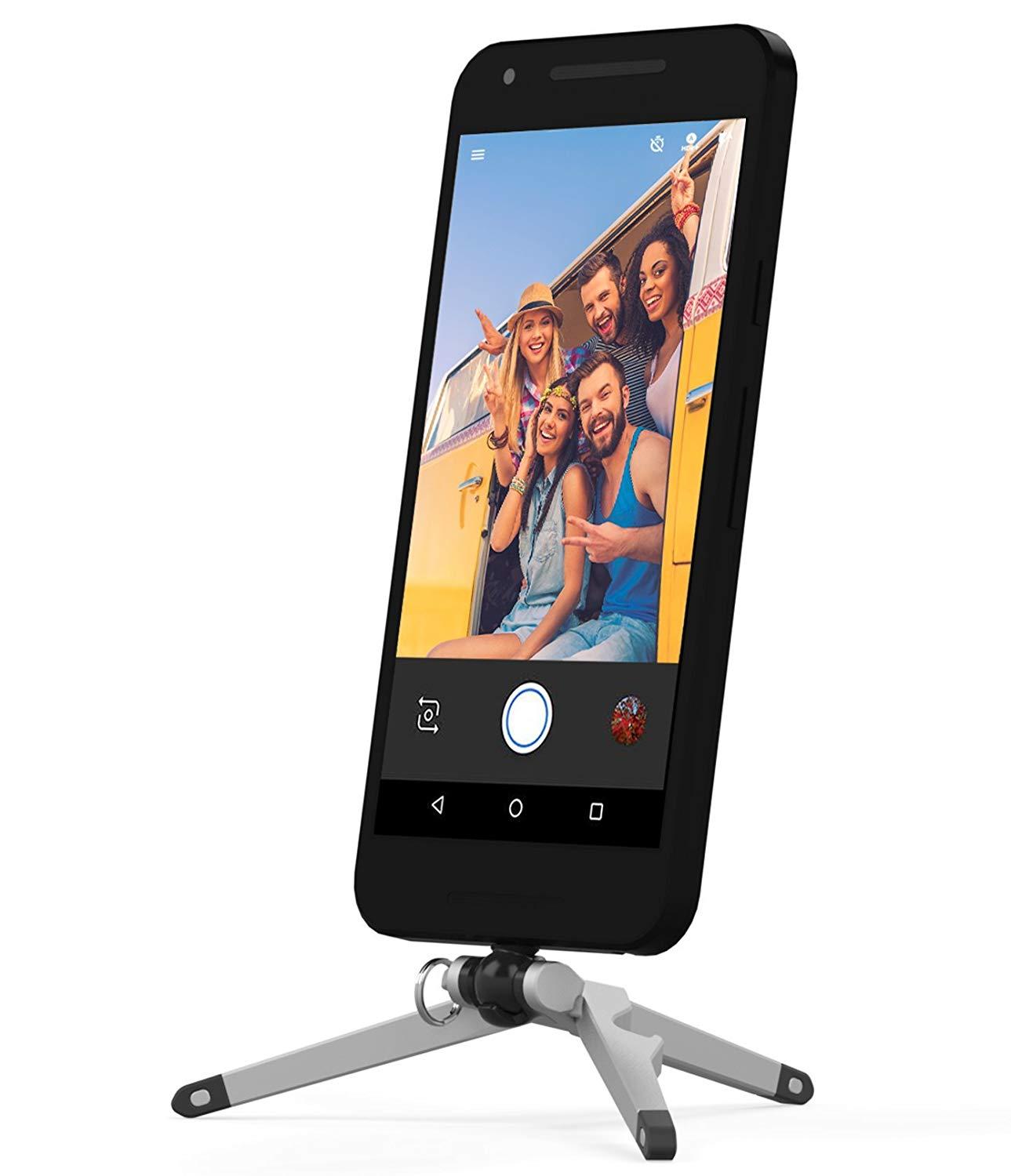 You could try and rest your phone against something, but it’s worth investing in a tripod if you want to take great time-lapse videos or even group photos using the self-timer mode.

The  Kenu Stance clips into the charging port and holds your phone steady in portrait or landscape mode. A balljoint means you can adjust it to the perfect angle for a time-lapse of clouds rushing overhead, or whatever it is you want to capture.

It’s amazingly compact when folded up. Just make sure you buy the correct version for your phone: there are USB-C, Lightning and ‘Android’ which is micro-USB.

The link above is for the iPhone version. But here are direct links for the others: 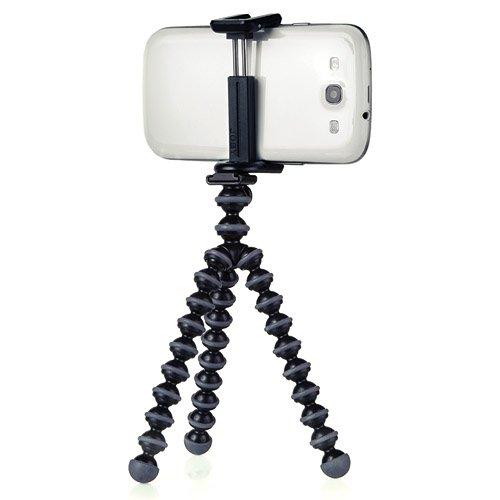 A universal tripod that should work with most phones is the GripTight GorillaPod Stand. The original GorillaPod was popular with photographers who wanted to mount their DSLRs in unusual positions or simply have a compact tripod that could be adjusted to suit uneven surfaces.

This is just a miniature version with a spring clamp for phones, and will fit phones 54-72mm wide. If your phone is bigger, go for the XL model which fits phones 69-99mm wide, and is no more expensive. 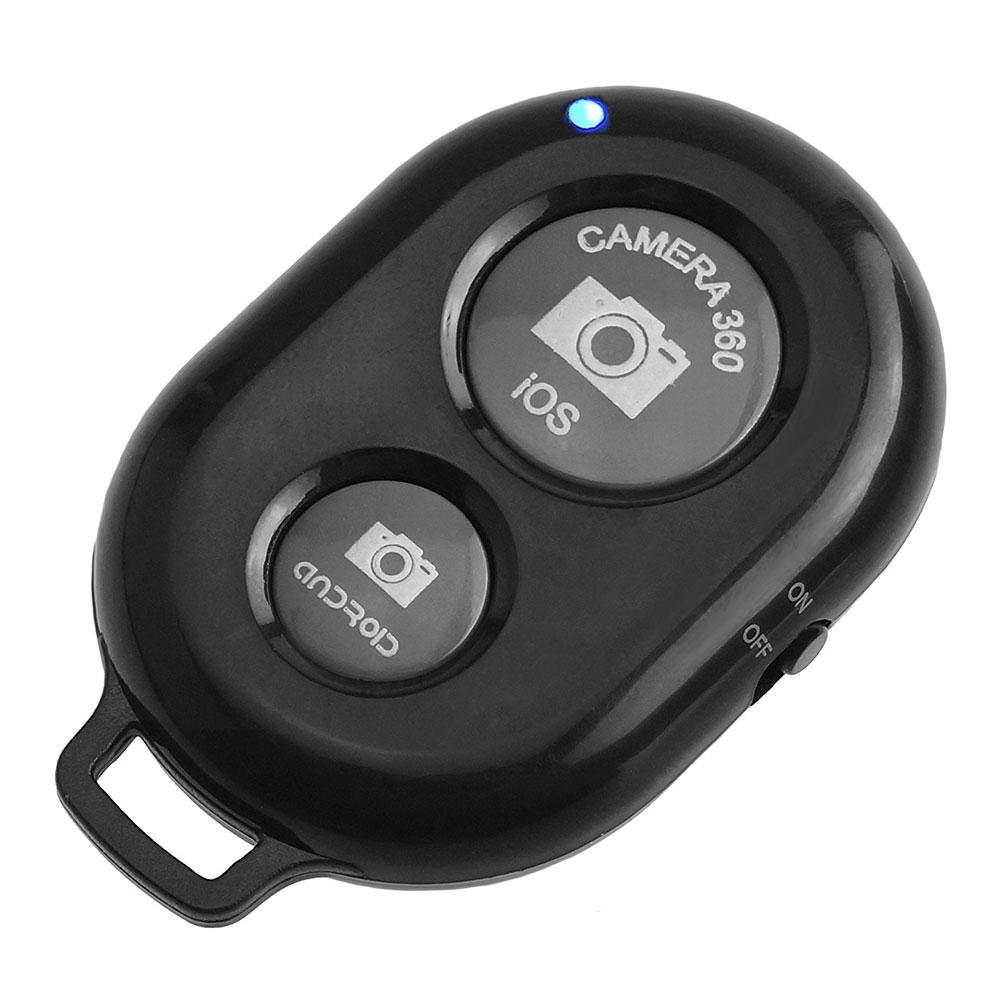 The rear camera is the best on most phones, but if you want to be in the picture yourself, you really need to mount your phone on a tripod, but then rush to get into the photo before the self-timer counts down.

An inexpensive alternative is a Bluetooth remote. This one costs under £6 / US$8, and has two buttons, one for iPhones and one for Android. You just put the camera app in the mode you want – photo or video – and press the button when you’re ready to take the picture or start recording a video.

For most phones you can use your stock camera app, but if not, download Camera 360 from the Google Play Store. 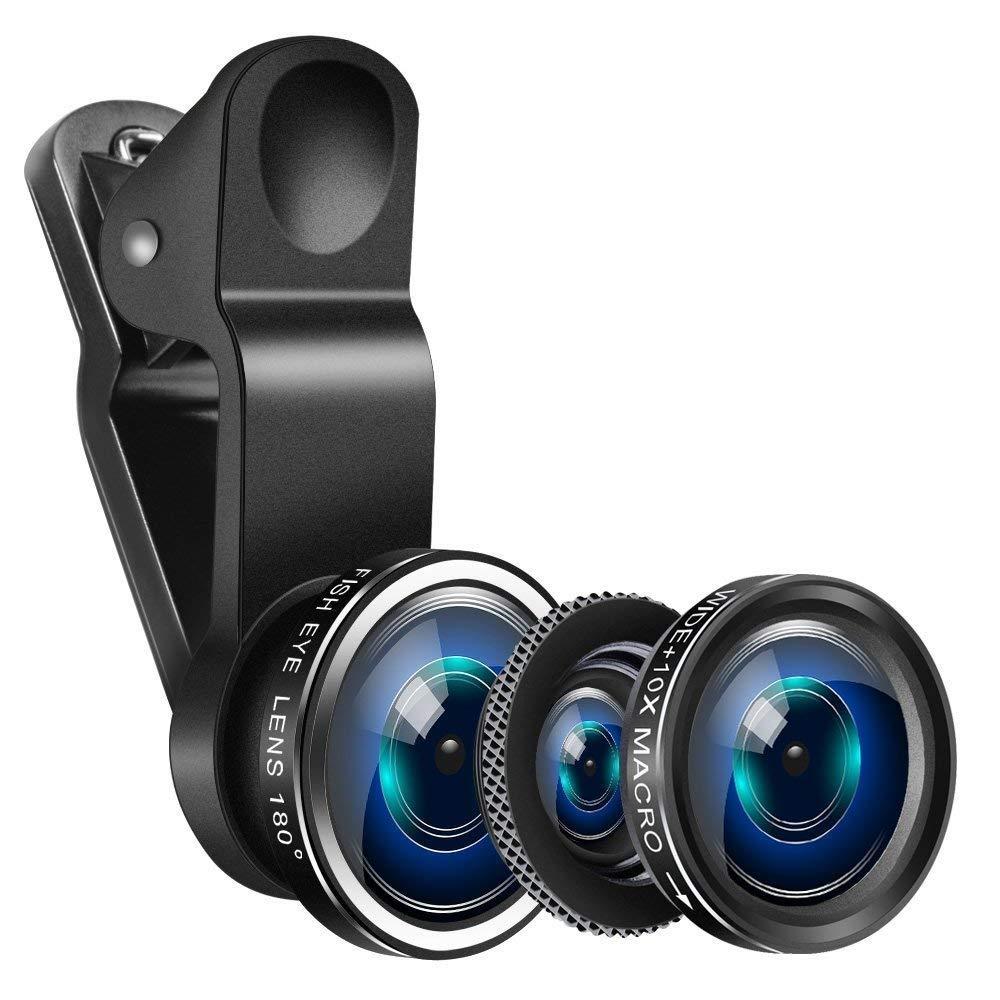 If Olloclip’s lenses are too expensive or you don’t like that they can’t be used on any phone, consider a universal clip-on kit such as this.

It comes with three lenses: macro, wide-angle and fisheye. You have to be careful to centre the lens on top of your phone’s camera, but it’s possible to get some surprisingly good results.