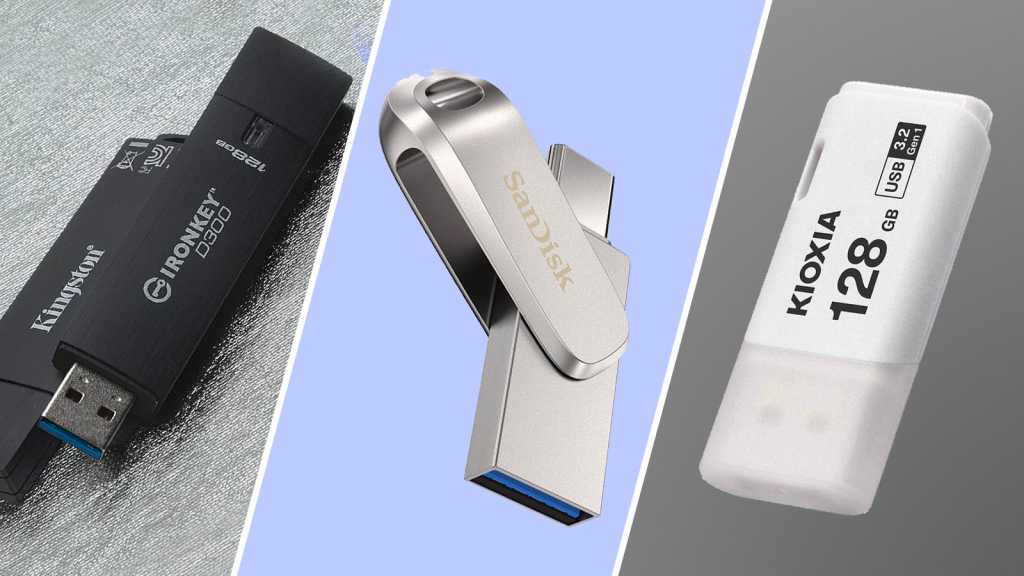 USB flash drives were once ubiquitous, the default way of transferring files between devices or taking them from place to place. That’s changed a bit as internet speeds have improved, not to mention cloud storage and file transfer services like Dropbox or Google Drive have boomed in popularity, but there’s still a place for the humble USB stick in many people’s lives.

Whether it’s the reliability of having your files in a single place (and not reliant on an internet connection), the security that comes from knowing someone would need physical access to the device to get at your files, or just the fact that USB sticks support file sizes that most cloud services would baulk at, there are plenty of good reasons to keep a USB drive or two to hand.

Still, you don’t just want to grab any old thumbstick, and there are a few factors to consider, from the physical size and design to storage capacity, read/write speeds, and support for different USB formats. Here’s what you need to know, along with our recommended USB drives – all of which we’ve tested ourselves.

How we test USB drives

We use CrystalDiskMark 8.0 to test the read and write speeds of each memory stick. This tests both the sequential speeds (reading and writing large blocks of data) and small-file performance, using 4KB reads and writes, but we’ll be focussing on sequential scores: they’re much more important for USB drives, as they better reflect the speeds you’ll see transferring files onto and off the drive. 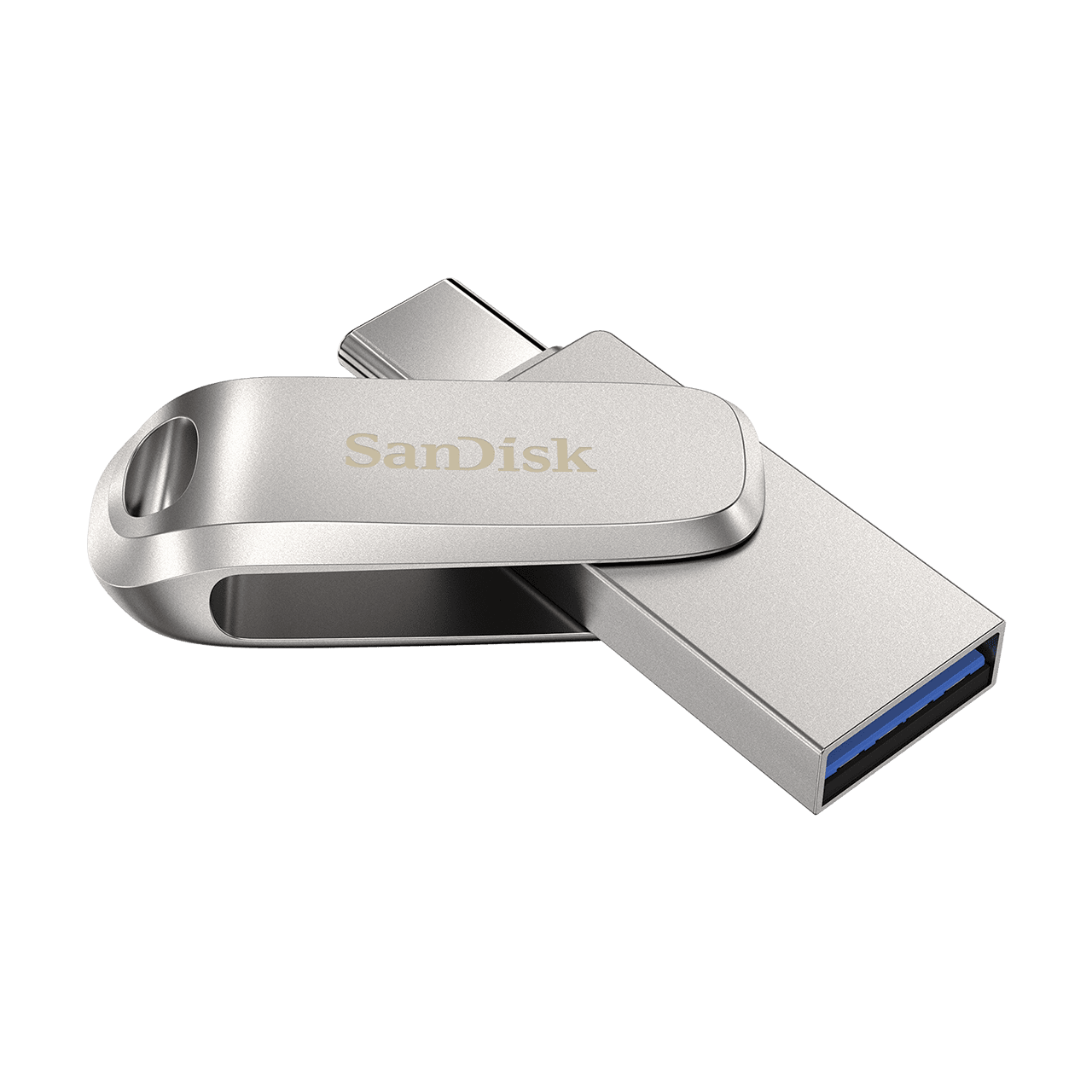 Aside from being a bit of a mouthful, SanDisk’s Ultra Dual Drive Luxe USB Type-C Flash Drive is a wonderful little stick.

It doesn’t offer the 150MB/s read performance promised on the tin – it offered 110MB/s instead, when  tested on our Core i7, USB 3.0 rig; but what it lacks in top-end pace (let’s not forget, it’s still fast), it makes up for in versatility and style.

The clue is in the name, but the ‘Dual’ emphasises the stick’s double-ended design, which puts both a USB-A and a USB-C connection at your fingertips. This makes it easy to move files between your computer and your mobile devices, or vice versa.

It’s also rendered in a beautiful brushed metal finish, that adds the kind of sophistication that’s sorely lacking from pretty much every other stick here.

There’s also the matter of capacity. This USB-C-laden Luxe starts at a respectable 32GB but if your wallet allows, can accommodate up to a whopping 1TB of internal storage – the highest in the lineup. 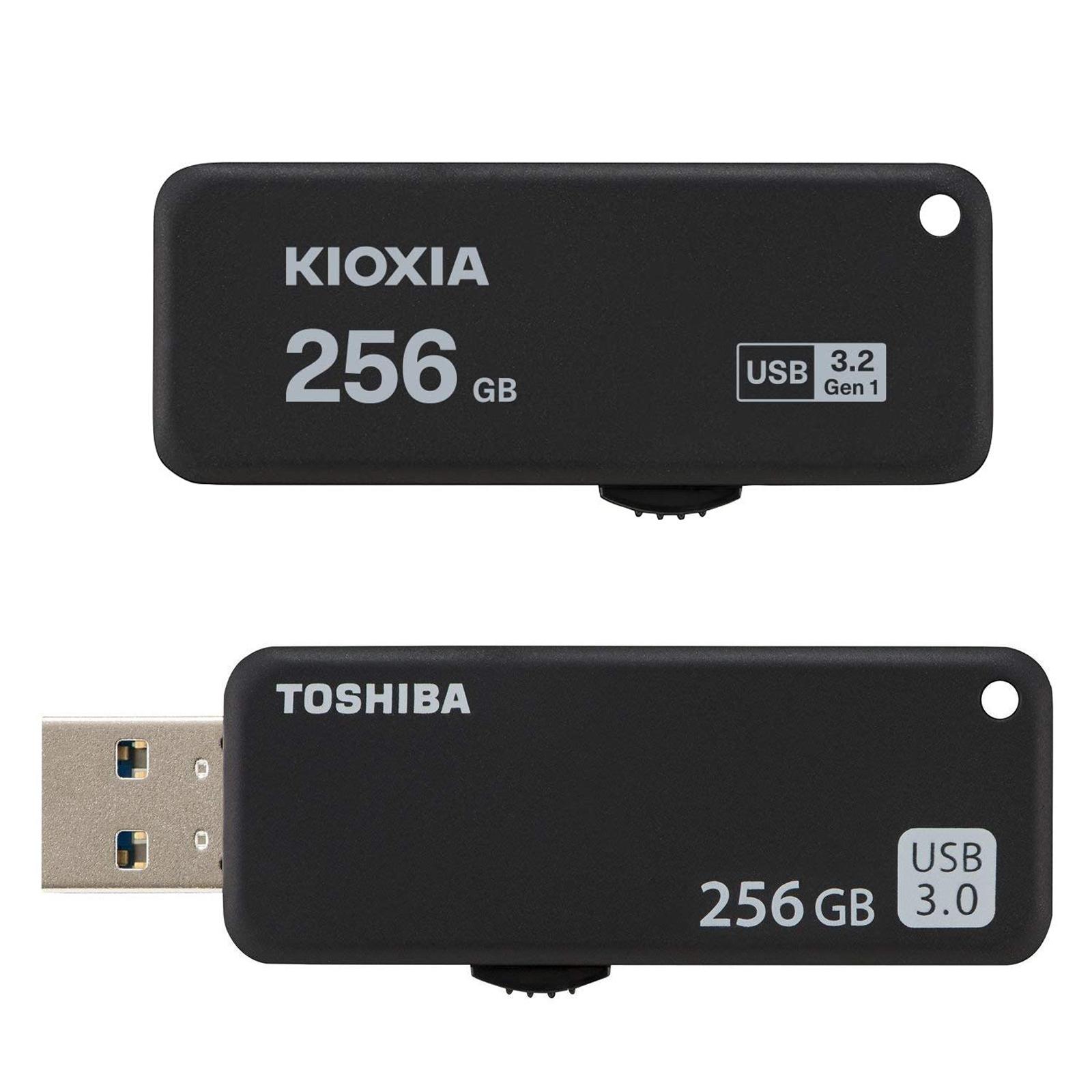 If you’re nerdy enough to know the Kioxia TransMemory U365 looks strangely familiar, that’s because it’s a rebranded version of the Toshiba TransMemory U365. After all, Kioxia spun off Toshiba in 2018.

The U365’s original branding marked it as USB 3.0, and despite the update, the speed hasn’t actually changed. It now just described as ‘USB 3.2 Gen 1’, which means the same thing.

But thankfully, it’s still extremely fast. In our tests, the U365 breezed past the 150Mbps peak promised on the box, clocking at 224.07Mbps, though write speeds capped at a less impressive 10.06Mbps.

While it isn’t as sleek as the SanDisk Ultra Dual with an all-plastic body, it does have a neat minimalist design with a slide-out connector. Between the design, speed, and large capacity, this is our recommended memory stick for playback of 4K video.

The Kioxia TransMemory U365 is available in four capacities: 32GB, 64GB, 128GB, and 256GB. The big downside right now is the availability. At the time of writing, there’s better availability from Amazon US so UK shoppers will have to pay more to have it shipped across the pond. 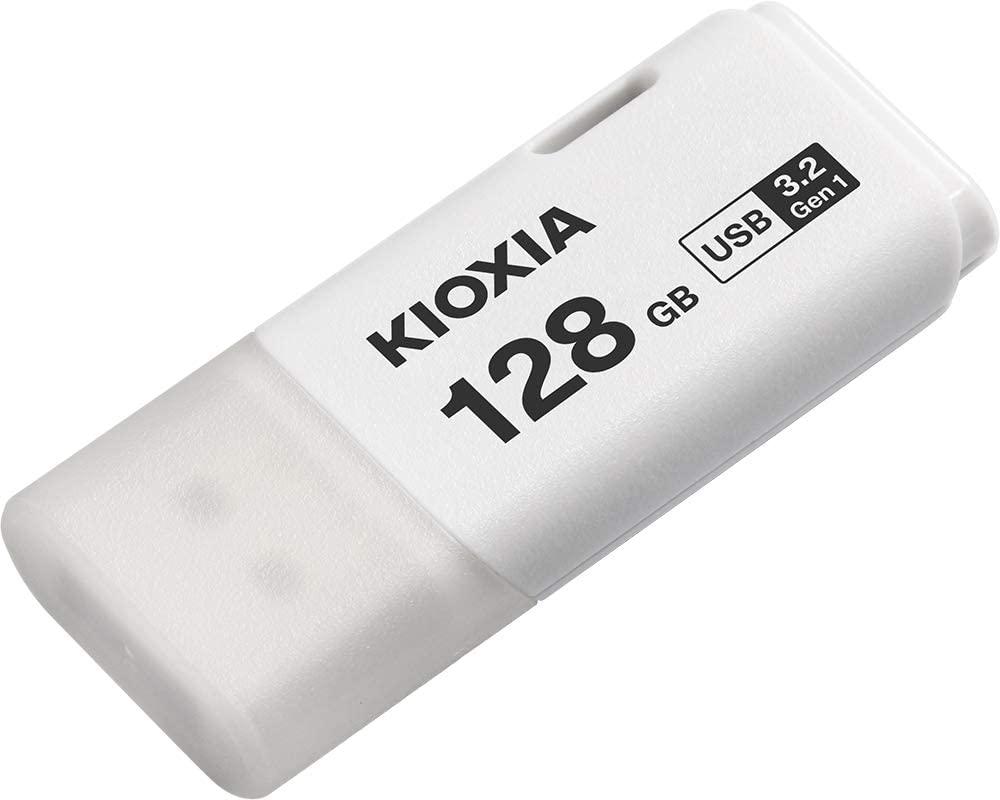 If you can’t get your hands on the U365, Kioxia does have an alternative that’s easier to find in the UK: the Kioxia U301.

The design is a bit old-school, with a protective cap over the connector instead of a retractable switch, so there’s a possibility of losing the cap if you’re not careful. The drive makes up for this with speed, however.

It’s marked USB 3.2 Gen 1, so again this means that it’s the 3.0 standard. In our test, write speeds clocked to 210Mbps while read speeds reached 22.2Mbps, making it slightly faster than the U365.

The Dual Drive is another SanDisk memory stick that supports both USB-A and USB-C.

You can switch between the two connectors using a simple slider, making the Dual Drive an easy way to move files between a standard Mac or PC and either a USB-C enabled smartphone, or one of the many modern laptops and ultrabooks that only include the smaller USB-C ports.

In terms of speeds, this falls roughly in line with SanDisk’s other USB drives. We got a sequential read speed of 133MB/s while the write speed capped at 67MB/s.

The design is sleek and simple – small without making you worry you’re going to lose it, and with contrasting grippy plastic and brushed metal finishes.

It’s available in a variety of capacities: 16GB, 32GB, 64GB, 128GB, and 256GB. With strong speeds and versatility thanks to the USB-C plug, this is a very easy drive to recommend. 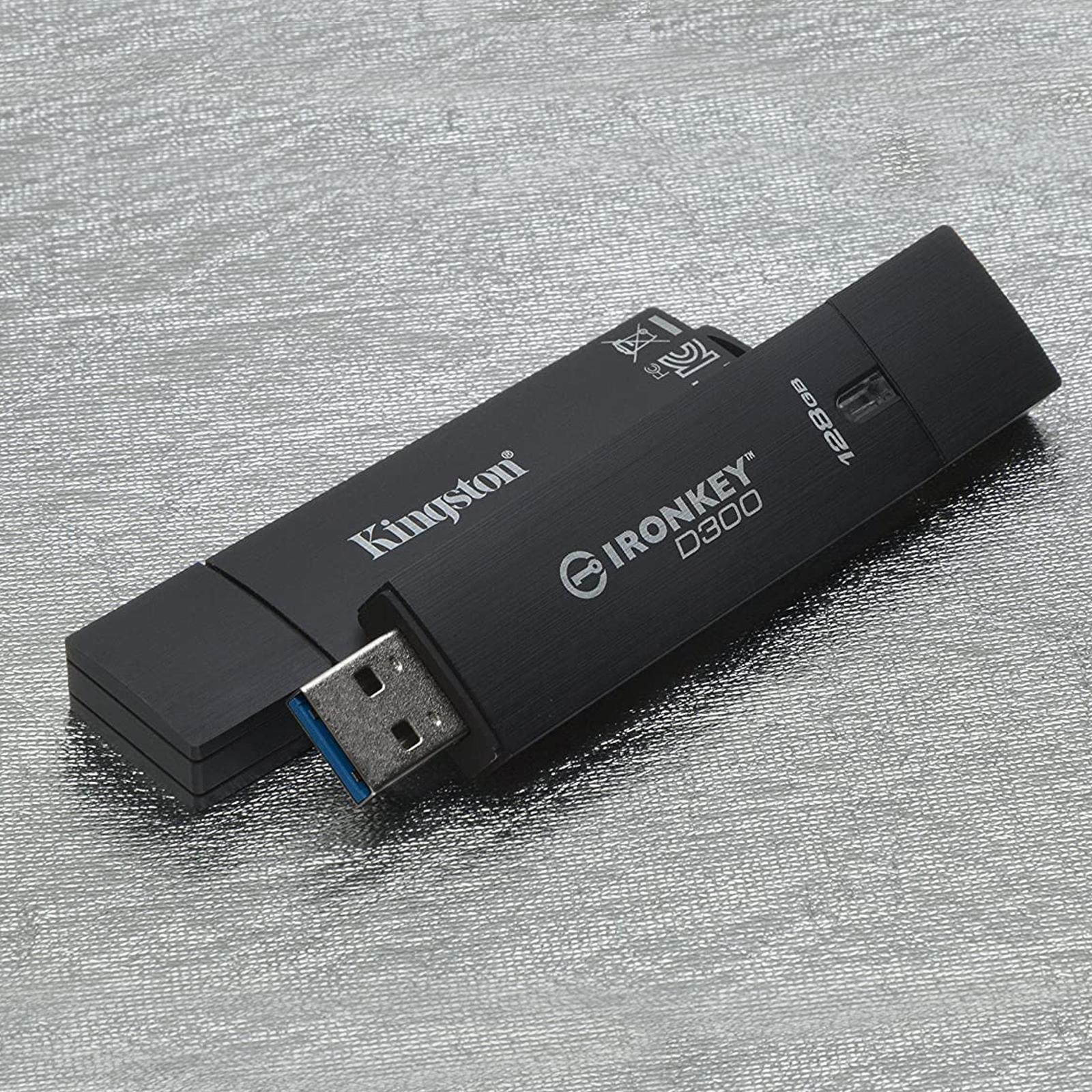 Here’s an excellent encrypted USB drive for those looking for a secure option for sensitive work documents, especially those who commute or hotdesk.

Let’s start with security. The Ironkey D300S boasts FIPS 140-2 Level 3 security – a standard set by the US government – which means it’s tamper-resistant and requires authentication before you can access what’s stored.

When you first plug in the drive, Kingston’s pre-installed software will prompt you to set up a password. The process is simple and only took a minute to complete. Be sure to remember your password because after 10 attempts the D300S will automatically delete everything on the drive. Also loaded on the drive is a user manual with additional support information.

Now let’s talk about speed. Without using any emphatic expletives: this drive is fast.

While operating on the 3.0 standard, the Ironkey D300S blazed through our speed tests, achieving 315.31Mbps read speeds and a similarly impressive 209.31Mbps write speeds – undoubtedly the highest we’ve seen. 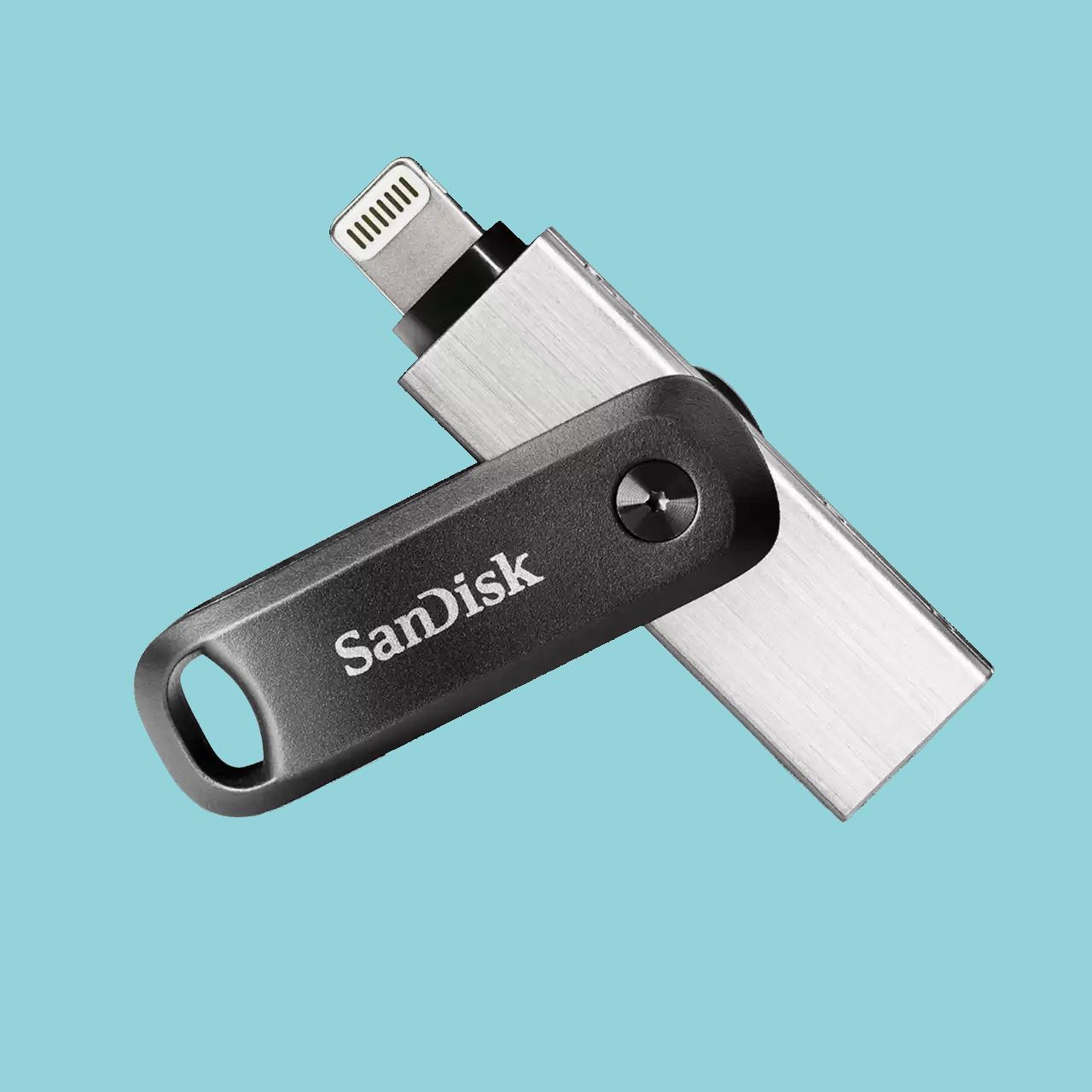 The Flash Drive Go is a portable dual-ended option for those needing to transfer files between Apple devices, whether that’s iPhone to iPad or to a laptop.

We love the swivel design that not only lets you switch between Lightning and USB connectors, but also includes a keychain hole. It’s the ideal option for anyone on the go – as its name suggests. The swivel design also makes it easy to connect to a phone or iPad without removing the case.

Additionally, the iXpand Go automatically back up photos and video and offers password protection for files via the iXpand app.

As for speeds? The Go outdid the standalone iXpand Flash Drive (see below) with maximum read speeds of 93.92MB/s and maximum write speeds from 46.52 MB/s making it our top choice for Apple users. 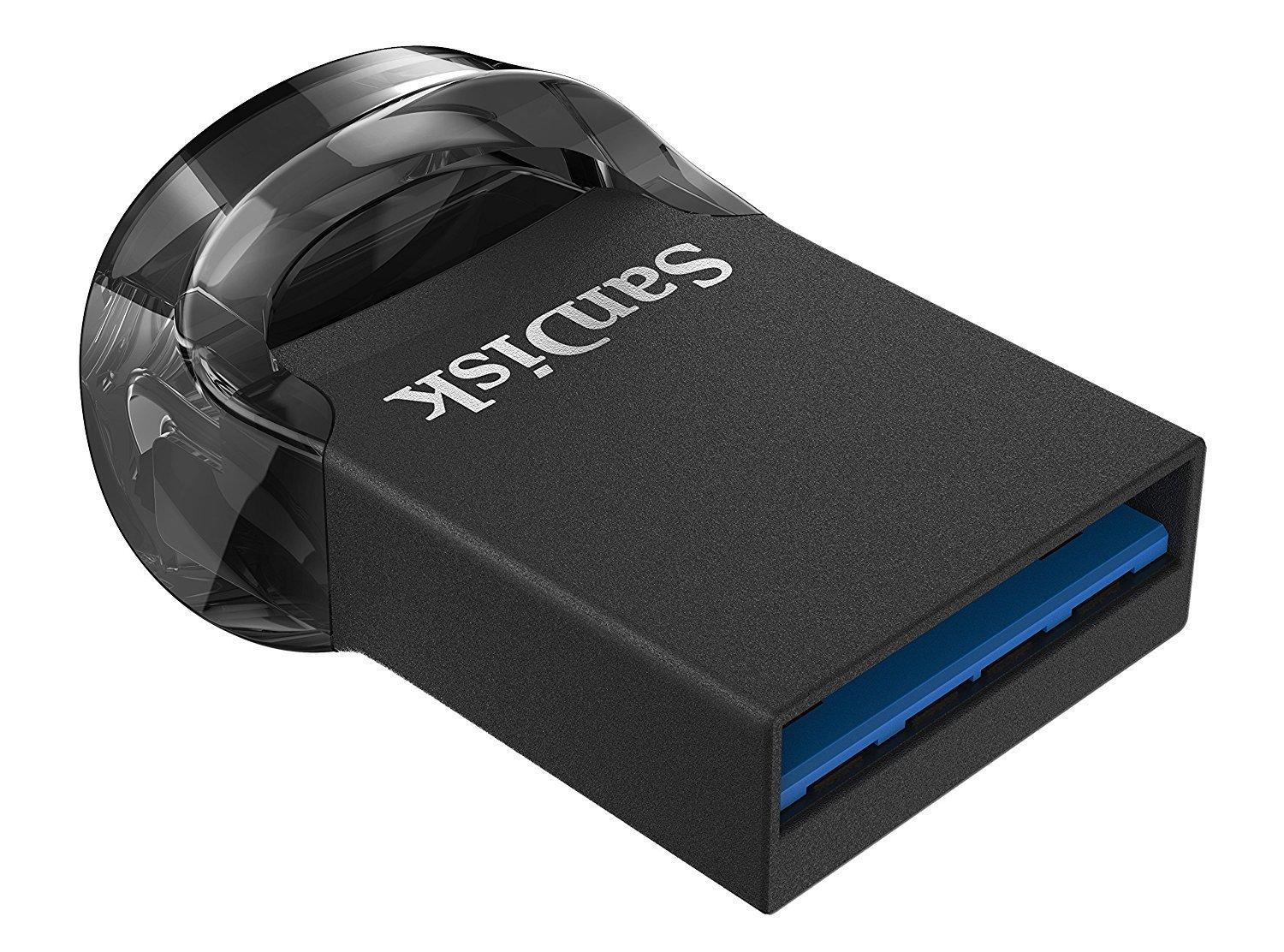 The SanDisk Ultra Fit is one of those ‘so small you’re definitely going to lose it’ flash drives, but that means it’s perfect for travel.

It’s small enough to store on a keyring without it being annoying, and you could even leave it plugged into a laptop USB port inside a carry case. There’s also the added benefit of 128-bit encryption support, thanks to SanDisk’s Secure Access software if you do ever lose it.

The Ultra Fit advertises read speeds of up to 130MB/s and write speeds of 60MB/s.

What’s surprising is that we actually did see those sorts of speeds in our tests. We measured a sequential read speed of 134MB/s – faster than SanDisk advertises – and write speeds of 44MB/s, which isn’t too far off their claim.

Even better, despite the ultra-portable package, it’s available in sizes up from 16GB up to 512GB.

This is a simple one: how much storage do you need your USB stick to have?

As flash storage has gotten cheaper, we’ve now reached the point where it’s pretty easy to get a good quality 16GB or even 32GB drive for as little as £10/$10 or so, so there’s really not much reason to buy one any smaller than that.

That will probably be enough for most purposes, but if you’re going to use it to create operating system boot drives, transfer 4K video or something similar, you might want to spend a little more to get a 64GB or 128GB memory stick – or even a mammoth 1TB drive – if you can swing the extra cost.

USB 3.0 is now the de facto standard across the industry with top speeds of 5Gbps, so we’d recommend you’d look to that at a minimum. You’ll still see some USB 2.0 drives – and they’ll work fine – but you’ll be taking a serious hit to your potential transfer speeds, with no real cost saving unless you’re buying something very high capacity – at which point you’ll probably want those faster speeds.

It’s worth noting that you’ll only benefit from the extra speed of 3.0 when using the drive with a compatible port. Check if there’s a blue highlight inside the port – if there is, that means it supports USB 3.0 speeds (up to 10 times as fast). Any good drive should be backwards compatible with 2.0 ports too, you just won’t benefit from the faster speeds.

You’ll also see some memory sticks that support USB 3.1, which is even faster still (10Mbps). You shouldn’t necessarily get drawn into the hype though. While 3.1 is theoretically twice as fast as 3.0, right now you won’t find very many computers or other devices that feature 3.1 ports, so most of the time you’re unlikely to take advantage of the extra speed.

But wait, does your laptop or PC list USB 3.1? Chances are it’s still 3.0. In fact, you might even see USB 3.2 on some USB drives, which supports maximum speeds of 20Gbps. Here’s where things can get slightly confusing, thanks to a naming convention change announced in 2019 by the folks who decide this stuff (it’s the USB Implementers Forum or USB-IF). The 3.2 standard encompasses both USB 3.0 and 3.1 – so how do you tell them apart?

Speaking of which, it’s now possible to buy a few USB-C memory sticks, which take advantage of the rise of the smaller, reversible USB-C ports in phones, tablets, and laptops. Even better, there are some drives that feature both USB-A and USB-C connectors, so that you can access the same files from a range of different devices, or even a Lightning connector so you can plug it into an iPhone or iPad.

Transfer speeds are partly dictated by the USB standard the drive uses, but there’s also a lot of room for variation between different memory sticks depending on their manufacture.

Drives will advertise both read and write speeds. Read speeds are important for playing files off devices – useful if you want to watch a movie you’ve saved on a thumbstick – and are usually much higher.

Write speeds matter more if you’ll frequently be transferring large files, or saving them directly to the drive. It’s not unusual to see these be much lower than the read speeds, which means that if a drive is only advertising a single speed without specifying which it is, it’s almost certainly the read speed.