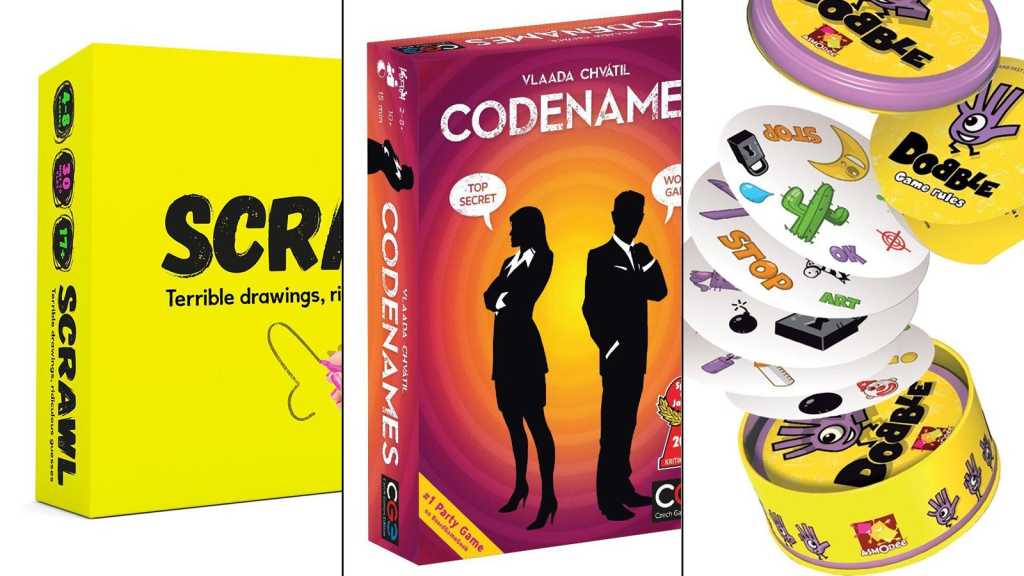 You might think we live in a digital age, but physical, analogue gaming has been making a huge comeback lately. The board games industry is now worth almost $10bn annually.

Part of the pleasure of tabletop gaming is the social element, and this is particularly valuable for party games. Forget alcohol: your party needs a serving of cardboard and plastic, and in this article we round up the eight best party games currently on the market.

Looking for more suggestions? We’ve looked elsewhere at the best board games and card games. 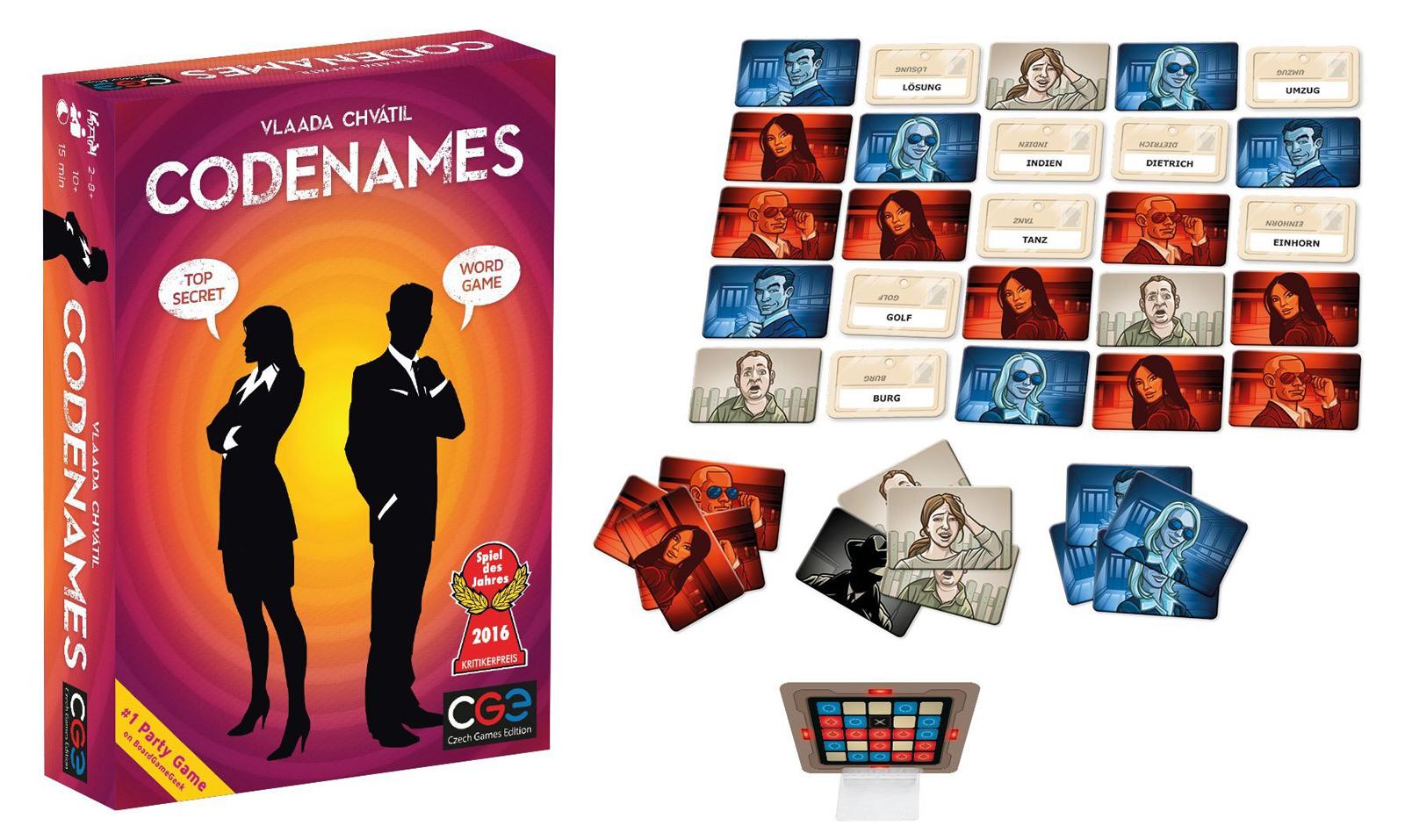 Split your group into two teams, red and blue, then nominate one player from each to be the spymaster.

You then lay 25 cards in a grid on the table, each of them labelled with a single word. The two spymasters sit on one side and get access to a secret map, which indicates which of the 25 cards are red spies and which are blue. No one else can see this.

The spymasters then take it in turns to give a one-word clue and the number of cards this applies to – so if they wanted you to pick “devil” and “alert” they could say “red, 2″… although it’s very rarely that easy. The team that gets all their spies first wins, but they must also avoid enemy spies, innocent bystanders and the assassin, who instantly loses you the game if picked.

Codenames is a lovely, simple concept that stretches the brain and ties into shared references, encouraging lots of silly chatter and amusing spousal arguments about “how could you not see that I meant…” A fun and surprisingly competitive game. 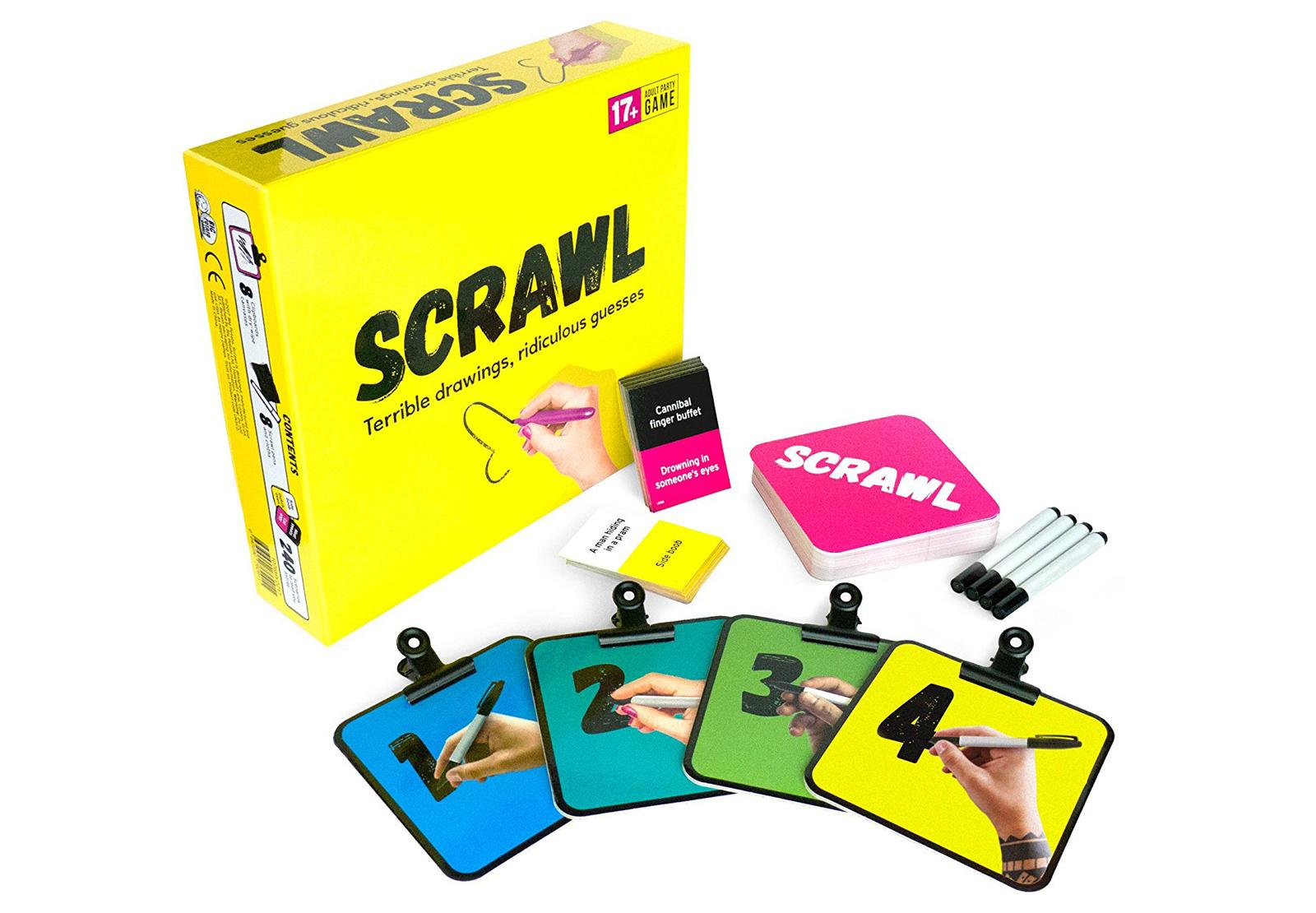 Scrawl combines elements of Pictionary and Chinese Whispers to create a hilarious party game for up to eight players. Each player is armed with a scenario card, a dry wipe pen and a mini whiteboard, and is initially tasked with doodling their scenario as clearly as possible. Then, everyone passes their whiteboards to the next player, who’ll need to write down what they think you’ve drawn. This is then passed on to the next player who draws what was written and so on until you get your card back.

It all sounds rather simple, but when the scenarios include “drowning in someone’s eyes” and “a man hiding in a pram”, the results can be side-splittingly funny. Every player will see the journey their doodle took at the end of each round, and points are awarded to the funniest card in each story.

Keep in mind that many of the scenarios are not suitable for kids. 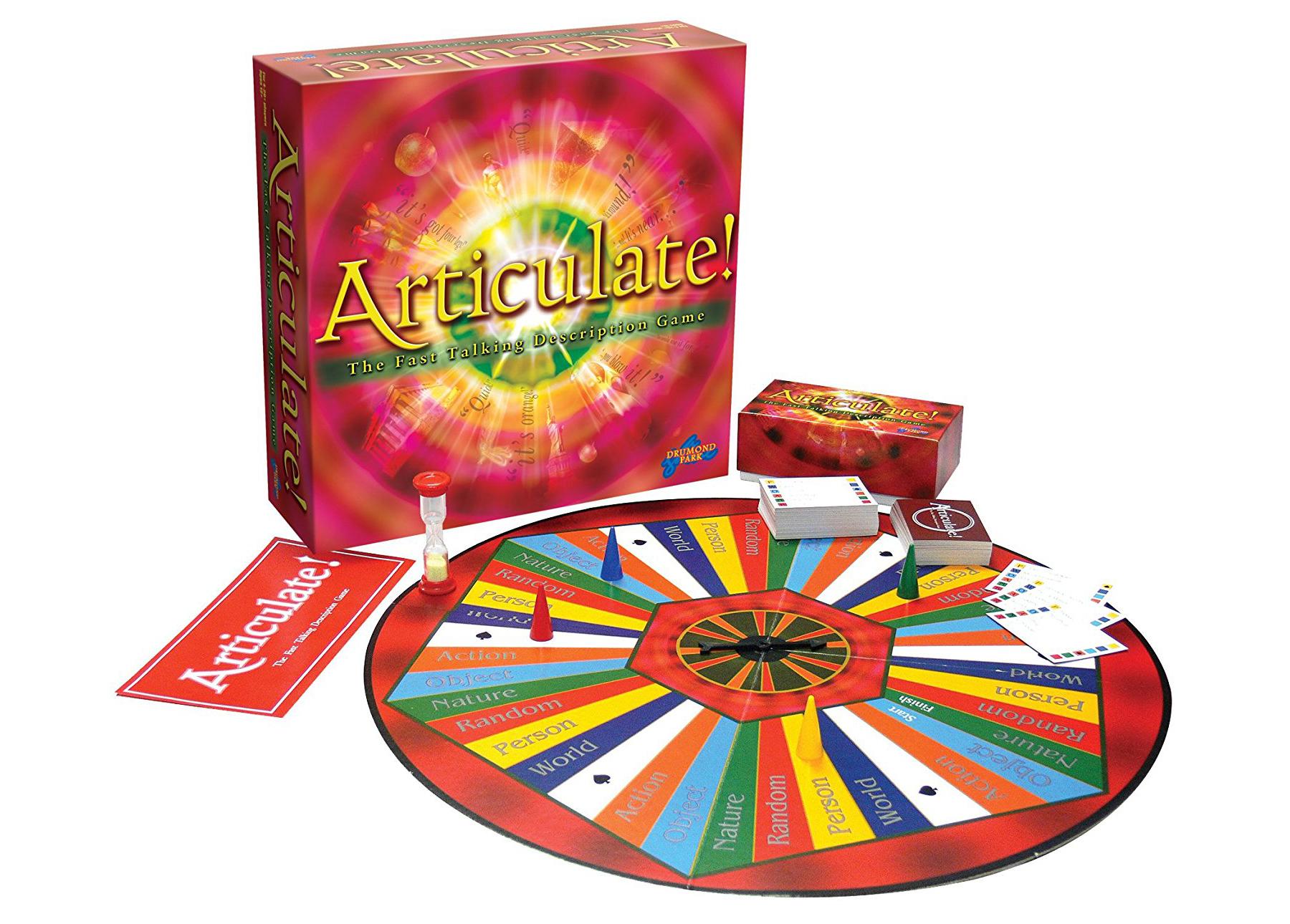 Man, we love Articulate. We wish we were playing right now, and that we didn’t play it so much back in the day that we’ve memorised all the answers.

It’s one of those games that’s all about talking fast: you get a bunch of cards with names of things on them – people, objects, places in the world or whichever other category you landed on, Trivial Pursuit-style – and have to convey these things to your partner through lateral description and not under any circumstances saying the name of the thing. (Rhymes and ‘sounds like’ are also forbidden.)

It’s silly, it’s oddly tense, and it’s ridiculously competitive – so beware of playing with people who love to win at all costs, or of enforcing the rules too strictly. A cracking game nonetheless. 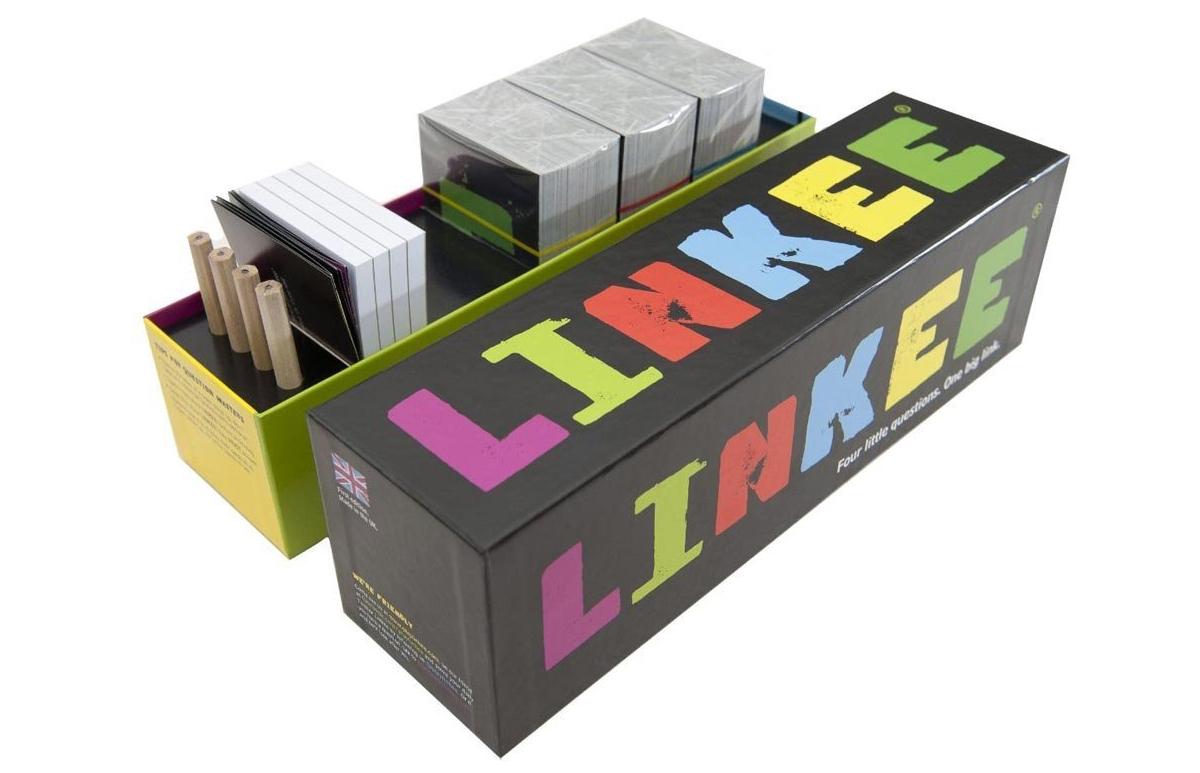 At first blush, Linkee looks like just another family trivia game: there are cards boasting trivia questions, and whoever knows the most obscure 80s soap characters or African capital cities will probably end up winning.

Not so fast, though, as Linkee comes with one major difference: you’re not actually meant to shout out the answers. Each card includes four general knowledge questions, but the aim isn’t merely to answer them: you need to figure out the hidden link between the four disparate answers.

For example, for a card that gives you Snoopy, Jay, M&Ms and 50 cents as the four answers the link between them all is that they’re all (sort of) the names of rappers. The first person to realise that – whether or not it takes them all four questions to figure it out – wins the card.

The winner of the game is decided H.O.R.S.E.-style – each card has a letter on the back, and the first person to get the right cards to spell out ‘Linkee’ is the winner.

Linkee is a great spin on the tried and tested trivia format that leaves players trying to keep track of the possible answers to four different, unrelated questions, while simultaneously drawing a link between them all that might range from the blindingly obvious to the bafflingly obscure. 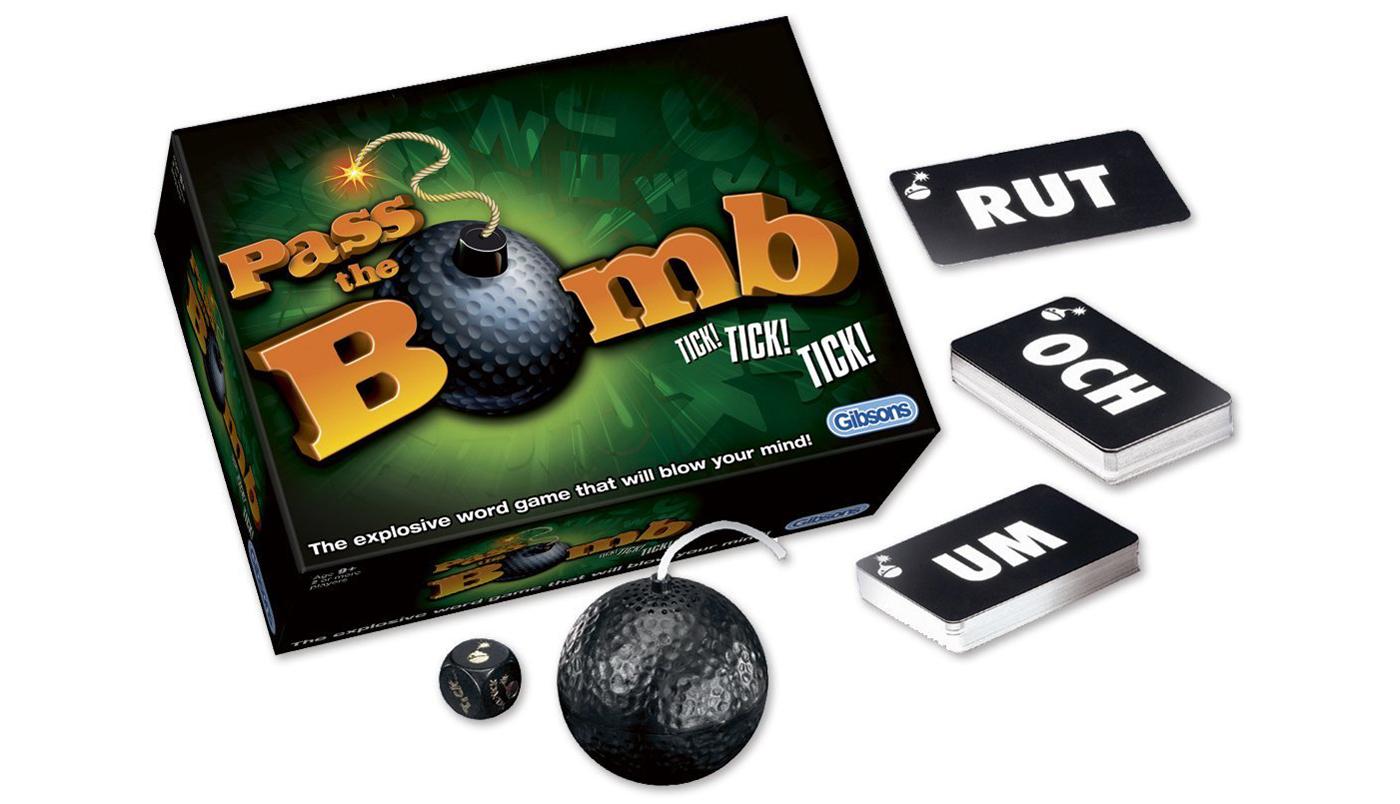 In one of the cleverest and most entertainingly literal ways of increasing tension, this game has you hold a fizzing clockwork bomb while trying to think of a word that contains the letters on a card: once you do so you can pass the bomb (which continues to fizz) and answering duties to the next person. Whoever’s holding the bomb when it goes off is in trouble.

It is amazing how effectively this simple prop turns normally rationally people into frazzled, silly wrecks, and this is a neat leveller for groups with clever clogs who normally get everything right. As is the random timing element: quick answering improves your odds but there will always be a big chunk of luck. 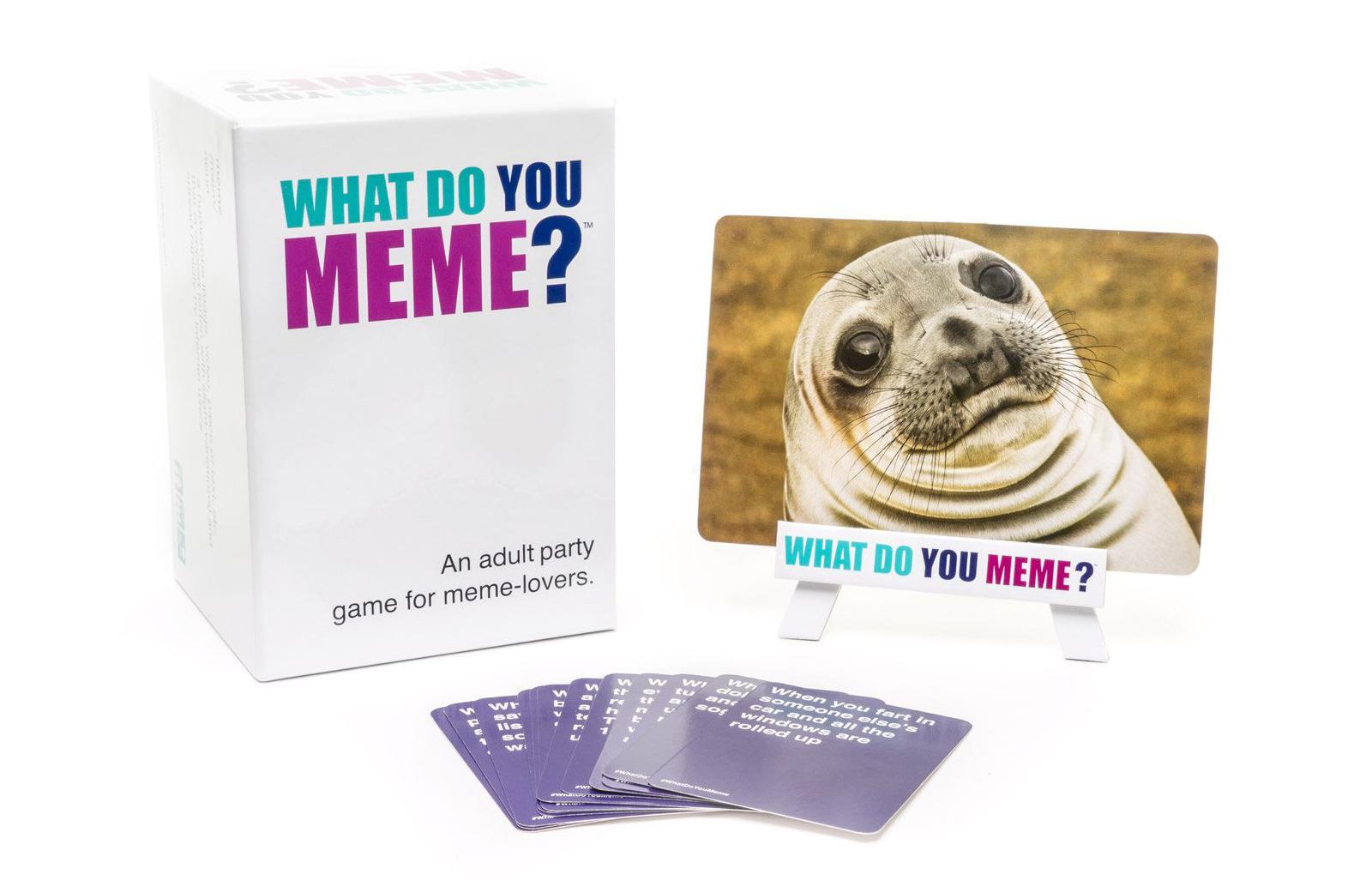 If you know your Salt Bae from your Selfie Kid, you’ll appreciate this LOL-inducing card game reminiscent of (the definitely NSFW) Cards Against Humanity. The rules are simple; a rotating judge selects a Photo Card from the deck and it’s down to you to select the best, most hilarious combination from your selection of Caption Cards. You then take turns, presenting your caption card to the group and the judge. The person with the funniest caption (or whoever the judge wants to win, really) wins, and becomes the judge of the next round.

And that’s it. It’s beautifully simple, but the almost endless combination of Caption Cards and Photo Cards mean that you’ll never get the same answer twice. If you’re a meme lover, we guarantee that you’ll be crying from laughter, whether playing with three or 20 people. It’s the perfect game for the social media generation if, y’know, they could pull themselves from their phones for long enough to play it. 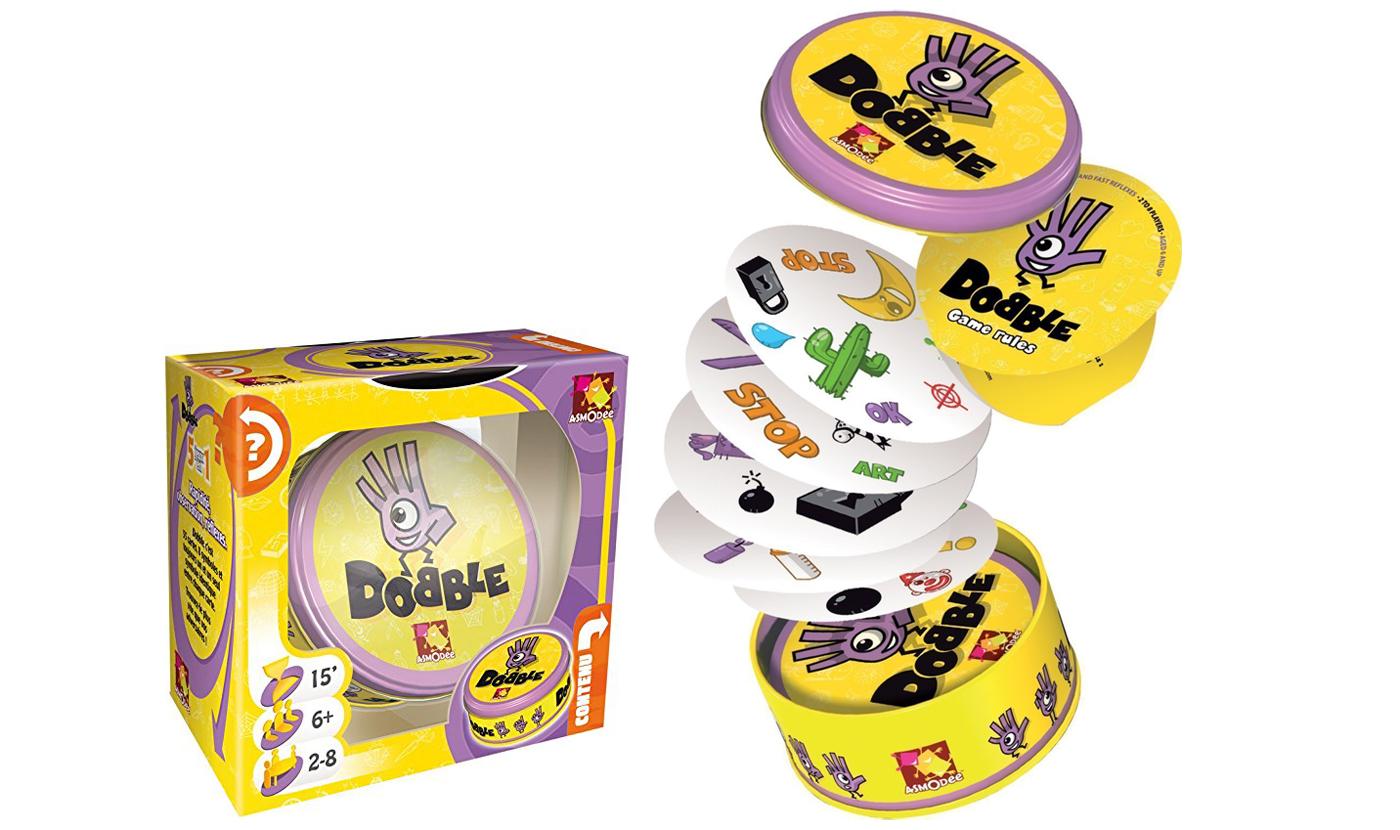 This one’s excellent for kids, partly because the concept is so simple and partly because it doesn’t require any trivia or even reading skills – you just have to be able to spot matching symbols. It’s a little like a souped-up version of Snap.

Dobble‘s 55 large, circular cards have been designed in such a way that each one has exactly one symbol in common with each other card. There are five different ways of playing, but all revolve around spotting the matching symbol faster than anyone else, and then shouting it out. Peace sign. Skull and crossbones! PURPLE HAND THING! 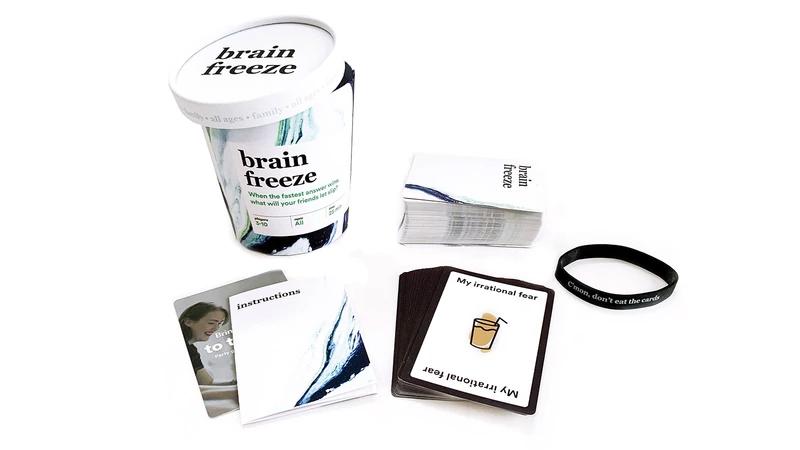 Here’s the delicious conceit behind Brain Freeze: people who are rushing to answer a question are less cautious about what they’re saying, and more likely to accidentally reveal something personal.

Each card has a category (“My best friend”, “My irrational fear” and so on) and a coloured icon. Players take it in turns to turn over a card, but when two players find themselves with matching icons, they must each race to give an answer to the topic on the other person’s card. Whoever blurts this out first captures that card, and whoever has the biggest pile at the end of the game wins.

(Another twist: in resolving a duel, you will reveal another card, which can then cause another duel. The resultant chain reactions are exhausting and a lot of fun.)

The categories are innocent enough – in this version at least; there’s also an adults-only edition that removes all pretence – but that just means you’re caught off guard when one comes along that happens to be more revealing as it applies to you. It’s all good fun, and adds a mild and pleasant sense of jeopardy to the traditional party card game.