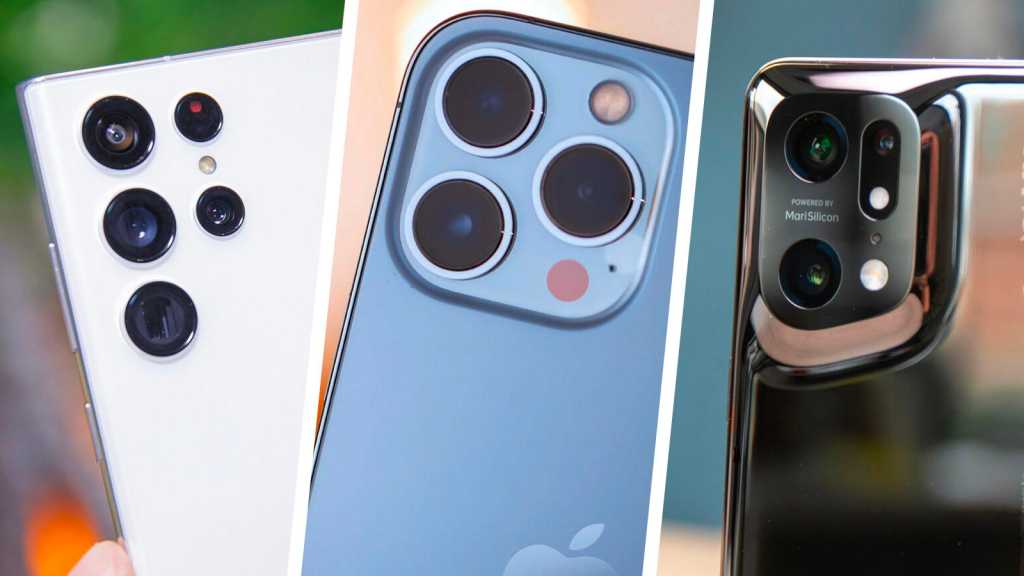 Despite their name, the rise of smartphones has arguably had more of an impact on the compact camera market than any other, and it’s easy to see why.

The added convenience that the integration of cameras into phones presented has only become more apparent as phone makers have improved and expanded the abilities of the sensors in phones over the years; to the point where (in certain situations) phone snappers can rival professional-grade cameras or achieve effects that would otherwise require additional equipment or expertise to attain.

There’s an inherent issue in knowing just how good a phone’s camera setup actually is before buying one. Looking beyond a device’s own marketing, there’s little to guarantee that you’re getting a pixel-perfect snapper without actually testing it out extensively beforehand.

There’s also the matter of what you might intend to use your phone’s camera for: are you looking for a great stills camera, a top-quality pocket video camera or a device that spits out the sharpest selfies possible? Depending on the use case, some phone cameras are better suited to certain tasks than others.

That’s where our rundown of the best camera phones right now comes in. We’ve run every phone in this shortlist through its paces, covering everything from performance and versatility to, of course, camera quality and ability.

You can click through on any of the entries below to read our full reviews of each device and read a full breakdown of each’s photographic capabilities, along with camera samples taken from each.

When it comes to smartphone cameras, Apple has made the entire iPhone range a force to be reckoned with. Unlike 2020’s lineup, where the standard  iPhone 12 won out against its Pro-branded sibling, 2021’s iPhone 13 Pro is undoubtedly the model to beat.

Beyond a familiar 6.1in Super Retina XDR display – now enhanced by 120Hz ProMotion visuals and a top-tier 5nm Apple A15 Bionic chipset – the iPhone 13 Pro boasts an astounding set of cameras.

Expect bigger sensors and faster apertures than its predecessor – meaning improved low light performance – far more comparable quality when switching to the phone’s ultrawide (which now offers macro shooting capabilities) and a 3x telephoto snapper (up from 2x), letting you zoom further than ever before on an iPhone with compromising on quality.

What’s more, the iPhone still leads when it comes to video capture, gaining some smart new features, like Cinematography Mode, alongside ProRes and Dolby Vision at up to 4K at 60fps; not to mention some of the best native mobile video editing capabilities out there.

Google shook things up for 2021, with the  Pixel 6 and Pixel 6 Pro debuting the company’s own Tensor silicon and a refreshed Android 12 experience out of the box, along with a completely new design and a significantly enhanced triple rear camera (on the Pro).

The 6 Pro’s camera system relies on a new 50Mp main sensor – the first time Google has upgraded an entry’s primary imaging hardware since the Pixel 3.

The result is a camera with astounding dynamic range, paired with a 12Mp ultrawide that offers impressive colour and consistent contrast, along with a periscopic 48Mp telephoto camera, with a 4x optical zoom; a far cry from the Pixel range’s old single-sensor approach to photography.

Thanks to the phone’s fresh-faced purpose-made Tensor chipset, the Pixel 6 Pro also showcases some smart new features editing features, like Magic Eraser – which can intelligently ‘paint out’ unwanted elements in your photos, not to mention, there’s rock-solid Face Unblur.

Despite dropping the ‘Pixel XL’ naming convention a couple of years back, the 6 Pro is an undeniably sizeable phone, with a stunning QHD+ curved-edge OLED that finally makes the move to a higher 120Hz smooth refresh rate (just like direct rival, the iPhone 13 Pro).

A huge 5003mAh battery also ensures some of the best battery life on a Pixel ever, even if fast charging is a bit of a mess.

While Samsung’s latest flagship can’t quite match the Pixel 6 line’s consistency and dynamic range, that doesn’t detract from the sheer versatility of its camera system, just as was the case with last year’s Galaxy S21 Ultra.

Those familiar with the S21 Ultra’s sensor setup should feel right at home using the S22 Ultra, which sports a similar 108Mp-led system, backed up by a 12Mp ultrawide and two 10Mp telephoto lenses: at 3x and 10x magnification, respectively.

A laser autofocus system – similar to the one Samsung first implemented on the  Galaxy Note 20 Ultra – delivers impressively fast focusing and the quality of both stills and video are brilliant across the S22 Ultra’s entire zoom range; with both low light shooting and shots taken at higher zoom levels both being rendered in far better quality this generation.

As with the other entries in the Galaxy S22 series, ease of use and a bevvy of fun features elevate the hardware, plus there’s greater control over those additional sensors, even in Pro mode. Selfie fans will also appreciate the whopping 40Mp front-facing sensor.

Similarly to the iPhone 12’s dual rear cameras, you get a similar set of snappers on the 13, albeit now set at a jaunty angle and with improved optics and larger pixels.

Outstanding dynamic range, colour and contrast between the rear sensors, and Cinematic Mode – as on the iPhone 13 Pro – are only really offset by the standard 13’s lack of a telephoto sensor or support for Apple’s ProRes and ProRAW capture standards.

Apple’s expertise in the selfie department persists on the iPhone 13 too, whose front-facing 12Mp TrueDepth camera gets most of the same image processing features as the rear snappers, not to mention Cinematic mode.

Beyond the camera, losing out on the 13 Pro’s high refresh rate display is one of the few other notable shortcomings on this otherwise stellar entry.

Everything we love about the iPhone 13 Pro’s camera carries across to the 13 Pro Max too, but adding in that larger display renders this one of the best smartphones for shooting video if that’s your priority.

The only reason it’s further down this list is that a bigger form factor won’t suit as many people and going for the Max comes with a cost premium too.

Beyond that, the phone’s triple 12Mp rear camera setup excels in everyday shooting, with impressive consistency, not to mention it’s equipped for more demanding projects, thanks to its ability to capture video in Dolby Vision HDR at 4K@60fps and Apple’s ProRes at 1080p@60fps or 4K@30fps.

Oppo continues its streak of doling out top-notch flagships with superb camera capabilities. It’s upped the ante on 2022’s Find X5 Pro by supporting its cameras with a new dedicated 6nm MariSilicon X NPU to help with image processing.

While the ‘microlens’ camera from its predecessor’s setup is no longer in the mix, the Find X5 Pro leads with a dual 50Mp sensor setup across its main and ultrawide snappers, as well as a 13Mp 2x optical zoom lens, and a 32Mp selfie camera.

The benefits of that NPU are most prominent with the phone’s low light shooting, which outpaces rivals like the iPhone 13 Pro series, however, dynamic range isn’t quite as broad as the likes of the Pixel 6 line, in the Android camp.

The Hasselblad partnership – pulled over from OnePlus – manifests in some UI tweaks and some unique shooting modes, but is more cosmetic than anything else, while the phone as a whole is an elegant blend of power and performance that makes for a nice refinement over last year’s Find X series.

The Xiaomi 12 Pro sets itself apart by being the only phones on the market at launch to leverage a 50Mp Sony IMX707 primary sensor. Expect excellent detail, punchy colours and respectable low light performance from the phone’s sizeable main lens.

The 50Mp 2x zoom and ultrawide snappers don’t disappoint either, with pleasing results, even in low light, while the 32Mp selfie snapper takes great stills, provided you don’t test the breadth of its dynamic range too hard.

Xiaomi serves up a host of creative shooting modes and powerful capture and editing tools across stills and video too.

Compared to its 2020 flagship, Oppo took a markedly different approach with 2021’s Find X3 Pro, at least where the camera setup is concerned.

While most rear camera modules round out the experience with a hefty telephoto snapper, the Find X3 Pro only boasts a 2x optical zoom module, with the most unusual entry being what the company has dubbed a ‘microlens’ camera; letting you capture shots at up to 60x magnification; complete with its own ring light for a truly unique perspective on things.

As for more general shooting, a pair of 1/1.56in 50Mp sensors reside behind the main and ultrawide lenses on the back of the X3 Pro, and boast superb colour consistency, fast autofocus – even in low light – and exceptional image quality that’s hard to beat.

Rather than the S22 Ultra’s two separate telephoto sensors, the Xperia 1 III gives us the first example of a variable telephoto setup on a smartphone, which rounds out the phone’s triple 12Mp rear camera setup.

This means the Mark III can capture shots across four focal lengths, without any form of digital trickery or compression; so long as you can cope with the split app architecture that Sony has gone for; emulating its famed Alpha and Venice still and video camera UIs respectively to offer professional-grade control.

There’s an obvious consistency drop-off as you move through the rear sensors – from the main to the telephoto – but for the price of the phone, the lacklustre front-facing snapper is one of the biggest disappointments.

Not only does this phone boast flagship-class internals at a competitive price, it’s one of the only handsets to sport three 64Mp lenses (regular, ultrawide and 2x zoom), along with an 8Mp 5x periscopic lens.

You’ll have to live without luxuries like wireless charging or a water-resistance rating and make do with the mediocre MyOS software, but if you can, the Axon 30 Ultra delivers an awful lot of performance per pound.

How we test phone cameras

Rather than using controlled conditions and attempting to compare cameras scientifically, we put each of these smartphone snappers to the test in real-world scenarios.

We drill down to test out manual controls, may alter still or recording resolution to draw comparisons and make sure to test any specialist or dedicated features and settings a particular device boasts too.