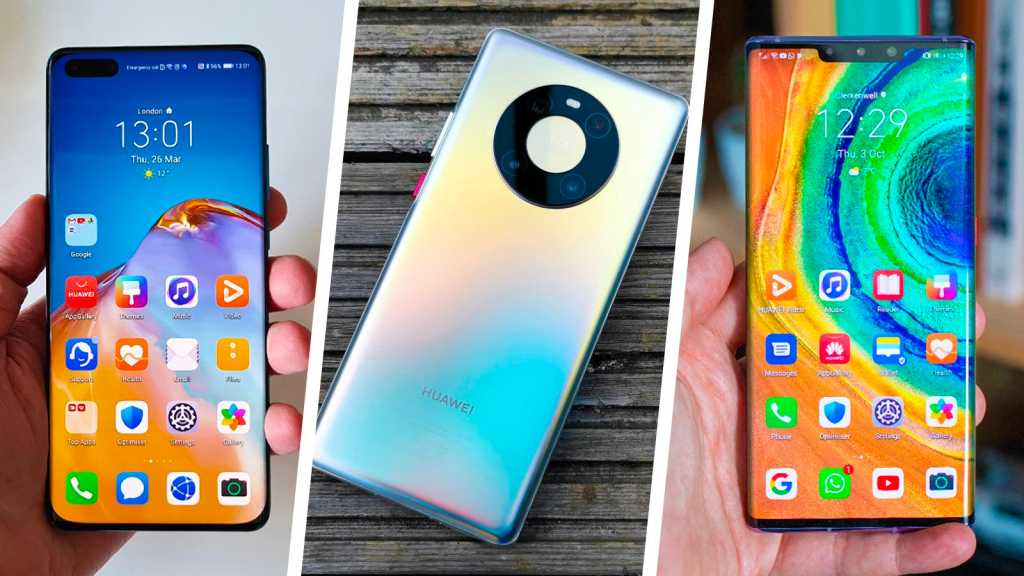 Huawei quickly rose to become one of the world’s biggest mobile players, ousting Apple for the number two spot in global smartphone sales in 2019. Just as it was getting going, however, the US-imposed ban took hold and has since hindered the company’s otherwise unrelenting march towards the top.

Huawei was placed on the US’ Entity List back in 2019, effectively banning trade between Huawei and any American company. This caused Google to cease trade with Huawei, and although the Mate 30 and Mate 30 Pro run open-source Android, they were the first of the company’s handsets that didn’t come with Google Mobile Services (a.k.a. GMS) preinstalled.

Sadly, even with the shift to the Biden administration, we don’t see this changing anytime soon, and that’s already proven bad news for the P40 range, Mate 40 series and Mate X2 foldable, as well as the long-delayed P50 series. They’re all clearly capable phones but the lack of Google Play is a dealbreaker for many in Western markets.

Huawei does offer its own alternative store – the App Gallery – but it pales in comparison to Google’s offerings. There’s also the move from Android to HarmonyOS, the process for which Huawei formalised on 2 June 2021, however, there’s little at this stage to suggest that this is reversing the fortunes of its device’s appeal outside of non-Google markets.

The good news is that all Huawei phones that originally shipped with Google Play Services will continue to get access to security updates, Google apps and services. That includes essentially everything before the Mate 30 range, which arrived at the tail end of 2019.

Android drama aside, here’s a selection of what we consider to be the best Huawei phones available to buy in 2022. 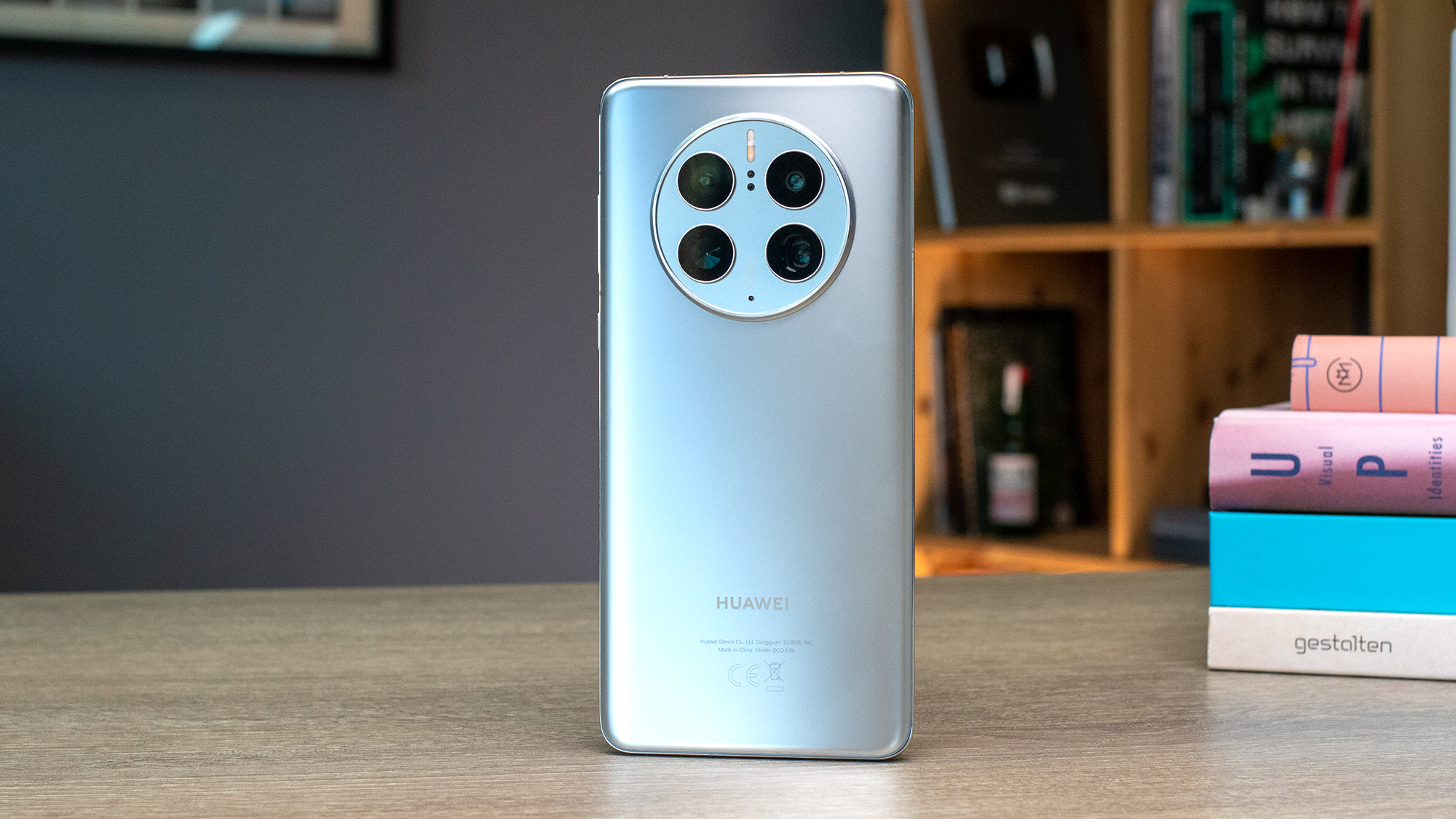 The Mate 50 Pro, on hardware alone, is the best phone Huawei has ever made. It has a lovely design, an excellent screen and top battery life.

Its cameras are also outstanding with a very capable 50Mp main sensor complete with user-adjustable aperture at ten steps – the first time that has ever been done on a phone.

The triple cameras produce some truly stunning shots with excellent detail and great low light performance. While it was in our pockets we took more photos than usual such is the Mate 50 Pro’s prowess, and it could always be called on to nail the shot first time. That’s quite rare in the smartphone world.

It’s also rare for an Android phone not to be able to access the Google Play Store and support Google apps and services natively, but unfortunately this is the case for the Mate 50 Pro. Like many of the phones on this list, it can only download apps from Huawei’s AppGallery, and many top apps are missing. You can sideload them from other sources, but unless you are a tech-tinkerer, it’s a huge faff and potential security risk. It’s also a manual process to update apps, which is annoying.

If you simply must have a Huawei phone this is the one to get – but we really only recommend it if you don’t have to access Google services and you don’t mind not finding the apps you use on the installed app store. 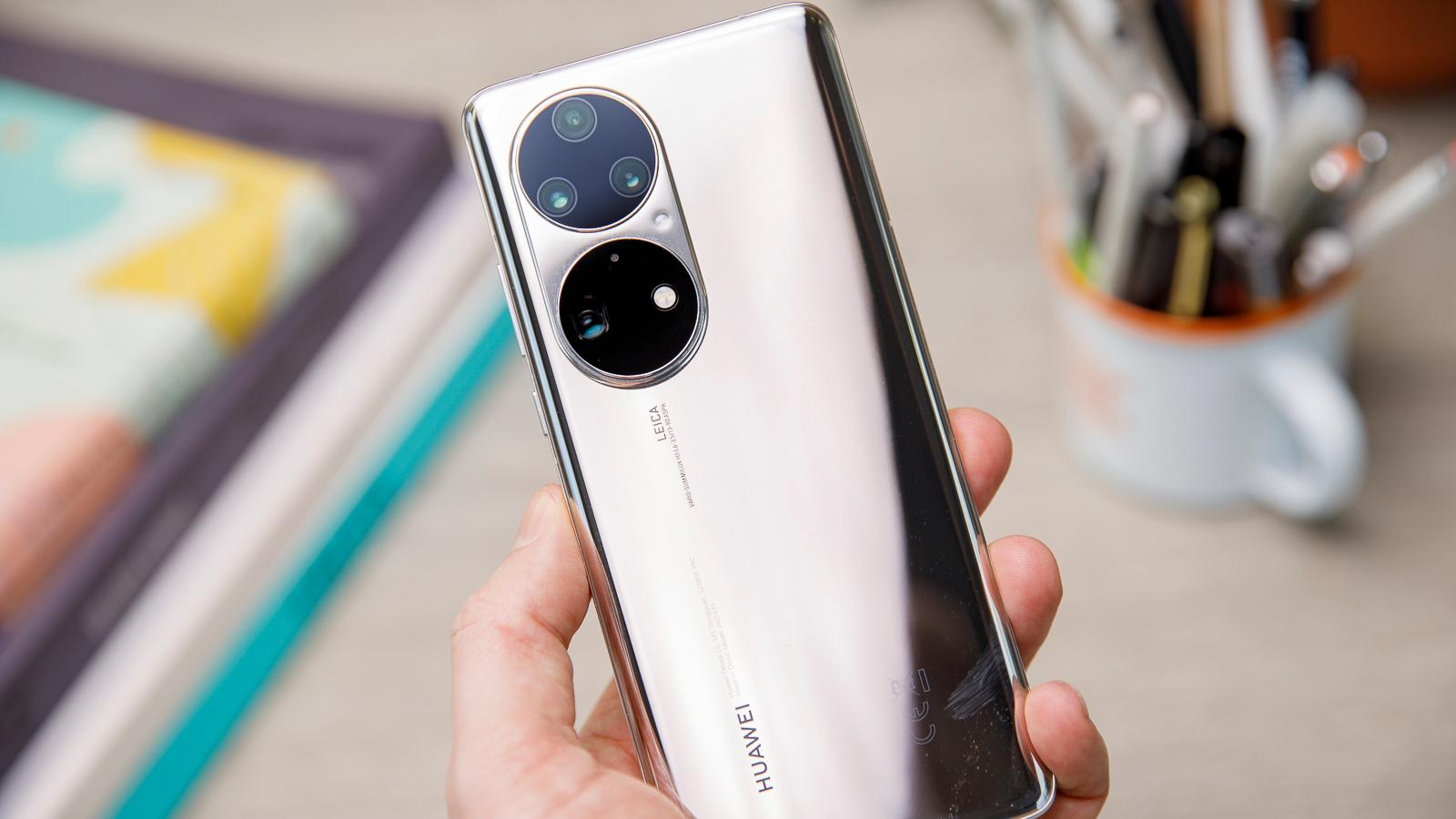 While the current P50 series doesn’t reverse the fortunes of the company’s phones – with regards to regaining access to Google Play Services – at this point it’s more a case of deciding whether the alternative that Huawei has built over the years since is now worth its compromises.

In the case of the P50 Pro specifically, while any Google apps you’re likely to want have been replaced by in-house alternatives, the EMUI 12-based user experience (HarmonyOS 2 only features on Chinese P50 units at present), looks and feels like most modern Android phones, with a few quirks that look as though they borrow from iOS.

As for the hardware, Huawei has had a little more room to spread its wings, with the Pro serving up a premium glass-backed design, with an eye-catching reflective finish and a unique dual-rear camera setup.

The camera system itself is very strong, even if it isn’t quite the best in the Android space, while general device performance is good too,. That said, the phone arrives late to the party with a Snapdragon 888, while its direct competitors have been able to leverage the newer Snapdragon 8 Gen 1.

Battery life is another highlight, backed up by great 66W fast charging, while a lack of 5G rounds out a list of challenging compromises on an otherwise capable smartphone. 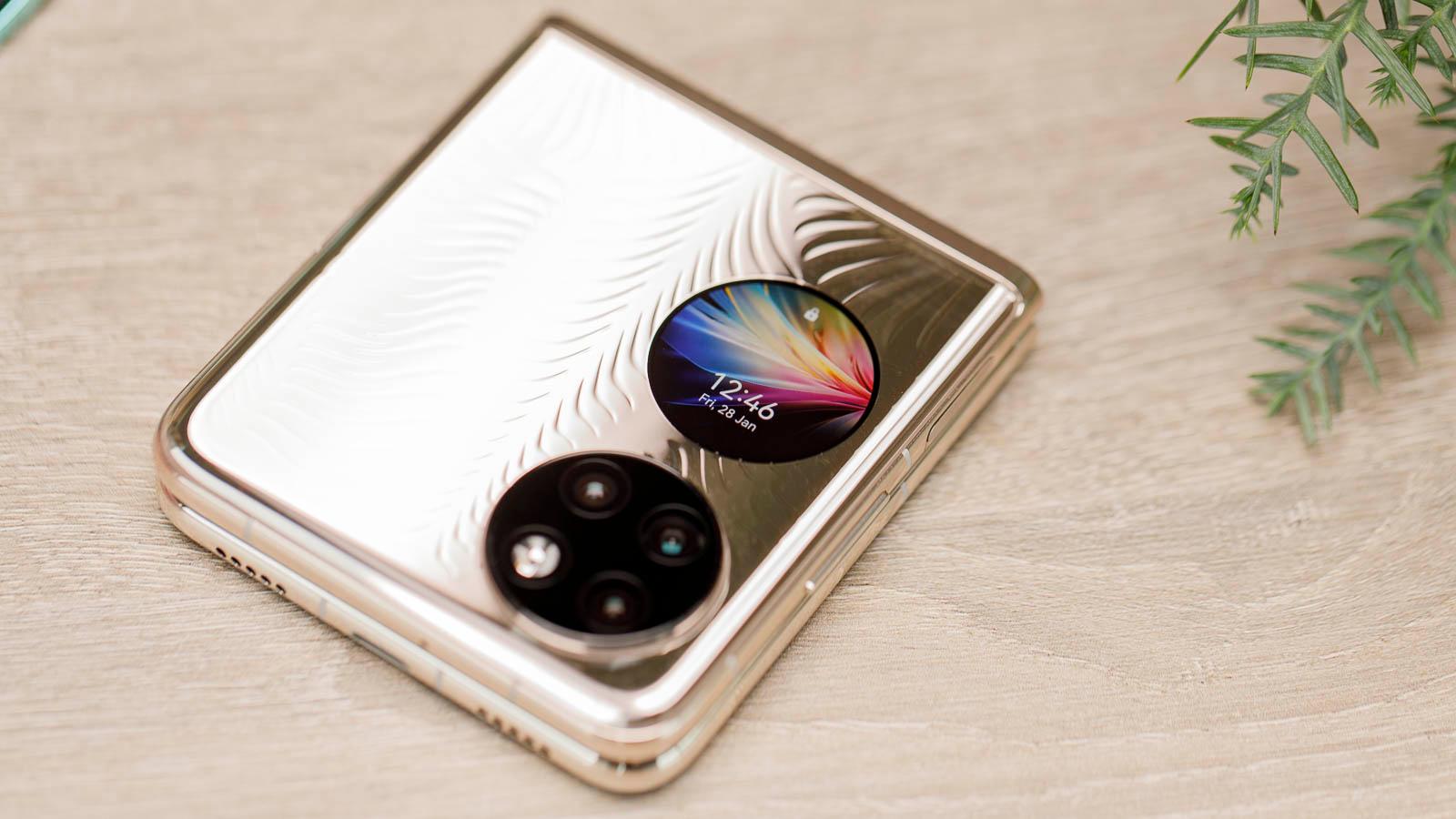 Like the P50 Pro, the Pocket’s user experience is wholly functional, even with the added hoops of a Google-free OS aren’t ever particularly welcome. No 5G is the other notable compromise but beyond that, it’s a lovely device, with a unique finish and an impressive gapless folding hinge system.

The main 40Mp camera beats out shots taken by lead rival – Samsung’s Galaxy Z Flip 3 – handily, while the rest of the imaging setup is odd, rather than bad.

The unique form factor and dual display setup have been utilised in some clever ways too but while it’s a triumph amidst Huawei’s current lineup, it’s too troubled to truly compete with offerings from other big players. 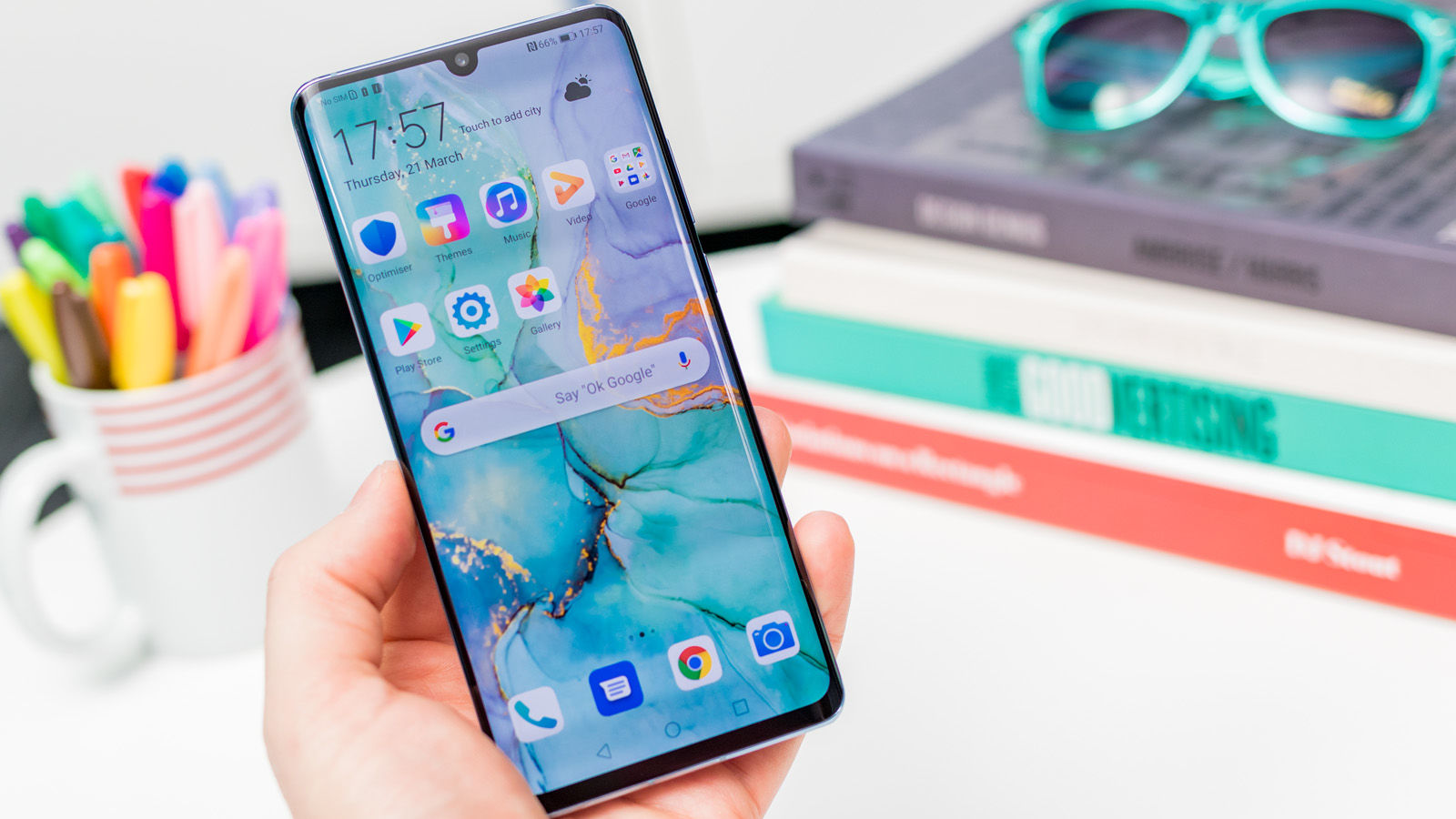 If you’re willing to compromise on software updates and current-gen hardware, there’s still life left in the P30 Pro.

The design is still top-drawer stuff, the display is great and the cameras can still deliver, even today. Prices have dropped since it launched early in 2019 too and it’s great value compared to many rival flagships as a result.

If you want to spend less (and get a little less), there’s the Huawei P30 to consider too.

Do note that the P30 series was announced before Huawei was put on the US trade blocklist and  Google announced its decision to pull support; therefore, it continues to have full access to Google apps, services and security updates and as such, is the last great Huawei phone to get our recommendation for the broadest range of users. 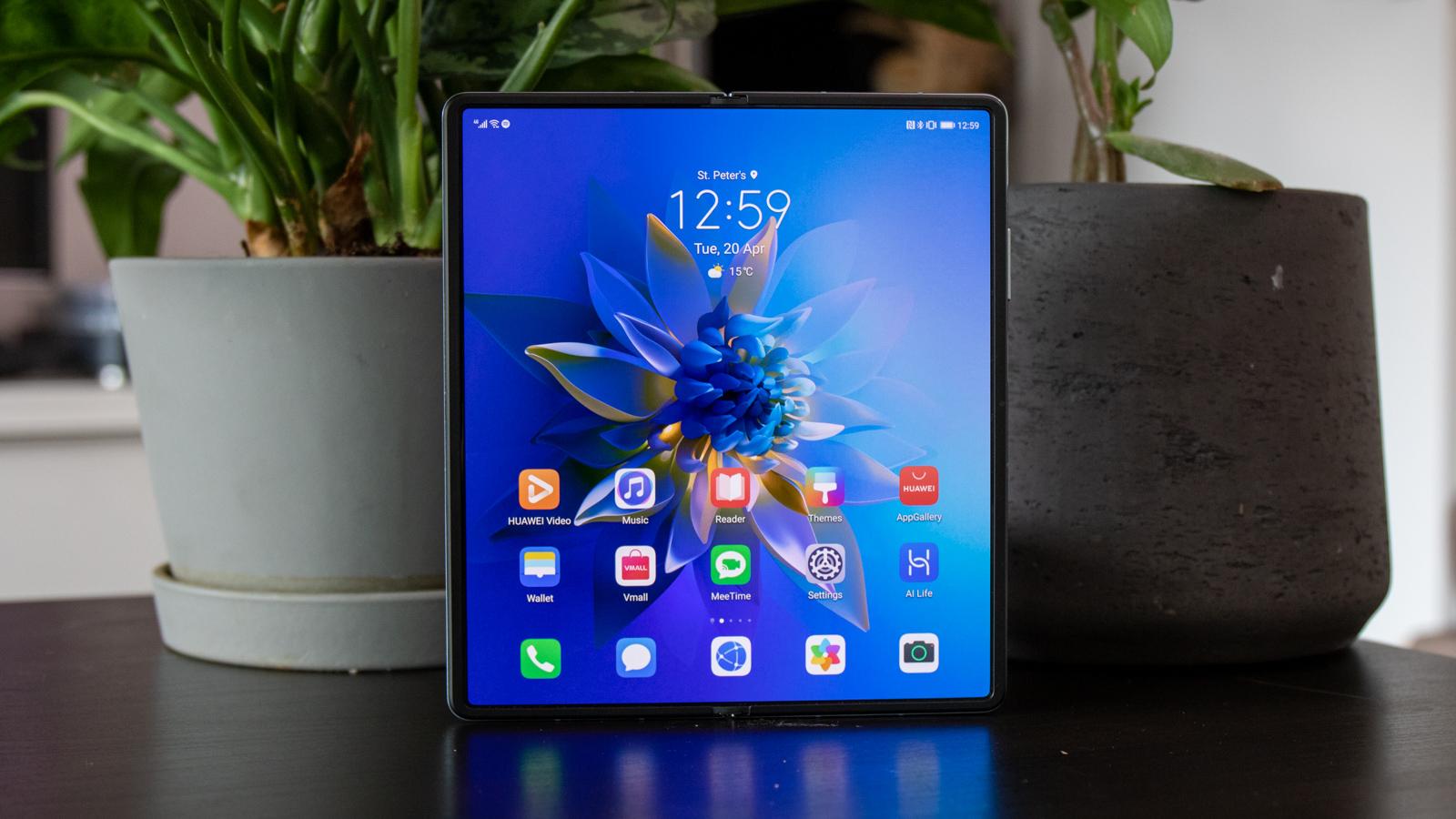 Huawei’s had a little practice at making foldables at this stage and the Mate X2 is a clear indication of the company’s mastery of this still-burgeoning form factor.

The Mate X2 boasts a beautiful vertical folding design that’s packed with power, from both a performance and photography standpoint. In fact, this device also happens to have the best camera in a foldable right now, by a clear margin.

If only GMS was able to be part of the equation, this would be a near-perfect device, save for its extortionate price tag. 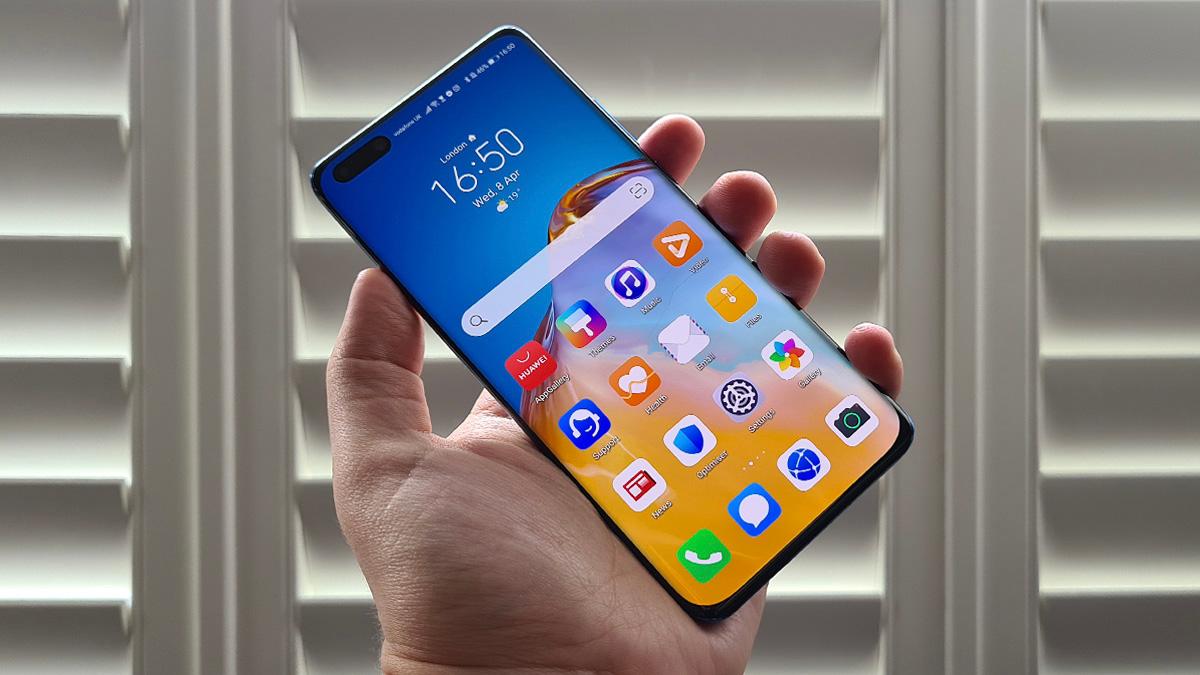 A superb follow-up to one of 2019’s best smartphones. The Huawei P40 Pro excels in every area, offering top-tier 2020 performance, 5G and WiFi 6 networking technologies, superb battery life with fast charging, a stupendous camera setup on both the front and back, plus an eye-catching 90Hz ‘Overflow’ display.

For everything the P40 Pro brings to the table, though, the experience is tarnished by the absence of Google Mobile Services and the workarounds needed to make the phone as easy or as enjoyable to use without GMS aren’t all that accessible to the average user. 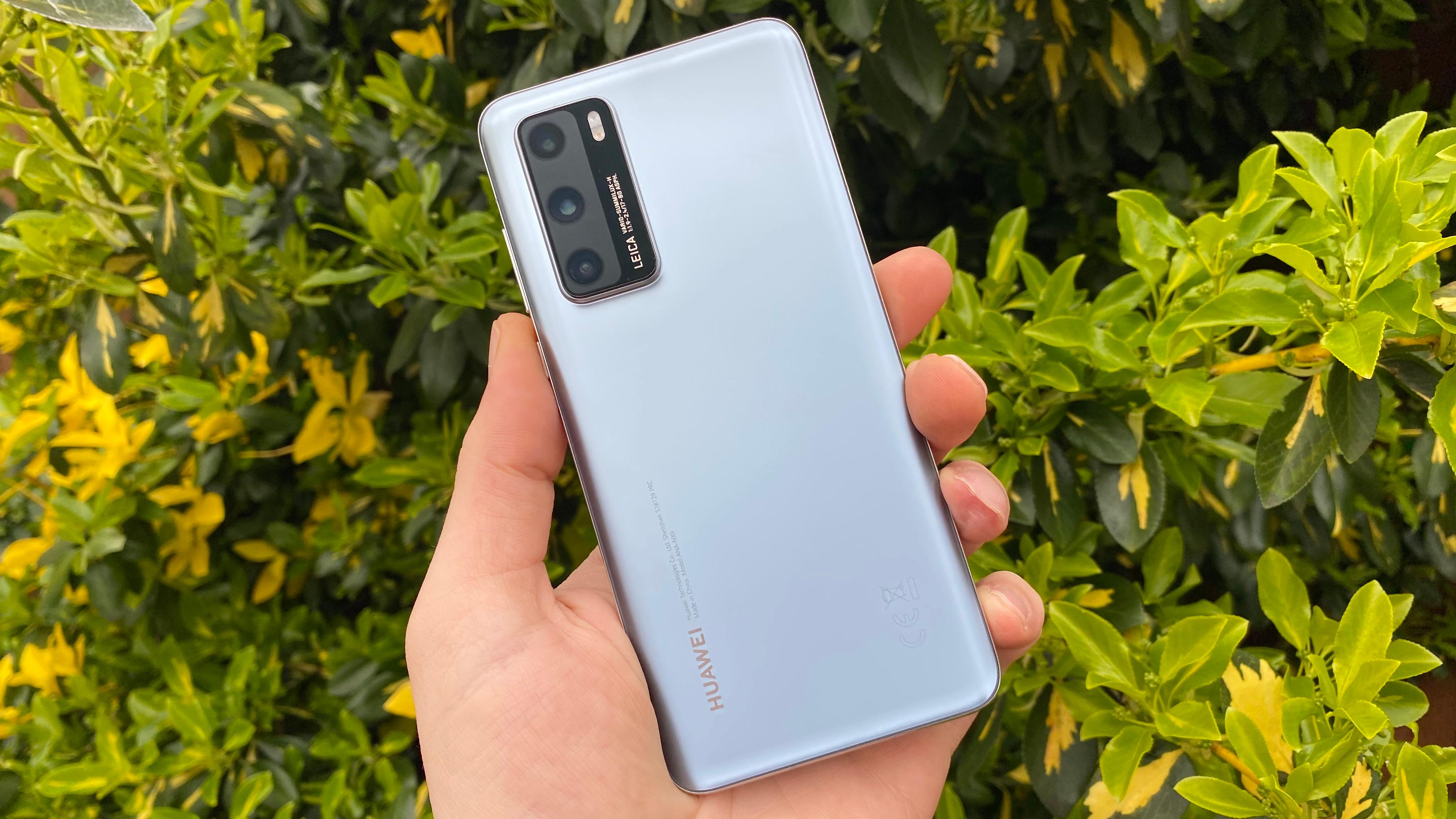 The P40 is a great bit of the kit that, although missing out on some of the high-end features of the Pro and Pro+ variants, can still take on most equivalent flagships from 2020, in terms of photography and raw performance.

It’s also a good-looking smartphone with an eye-catching matte glass finish on the rear that leaves a soft-touch sheen, plus there’s a bright, crisp 6.1in OLED display to enjoy too.

Of course, the real issue is the lack of Google Play services. Huawei has undercut its rivals, offering a significant saving on flagship-level hardware, but you won’t be able to properly access apps like Google Maps and YouTube.

If you’re a confident techie that doesn’t mind side-loading apps and working around a Google-free ecosystem, the P40 is a great phone at a great price, but if you just want something that works out of the box, we’d suggest going for another option. 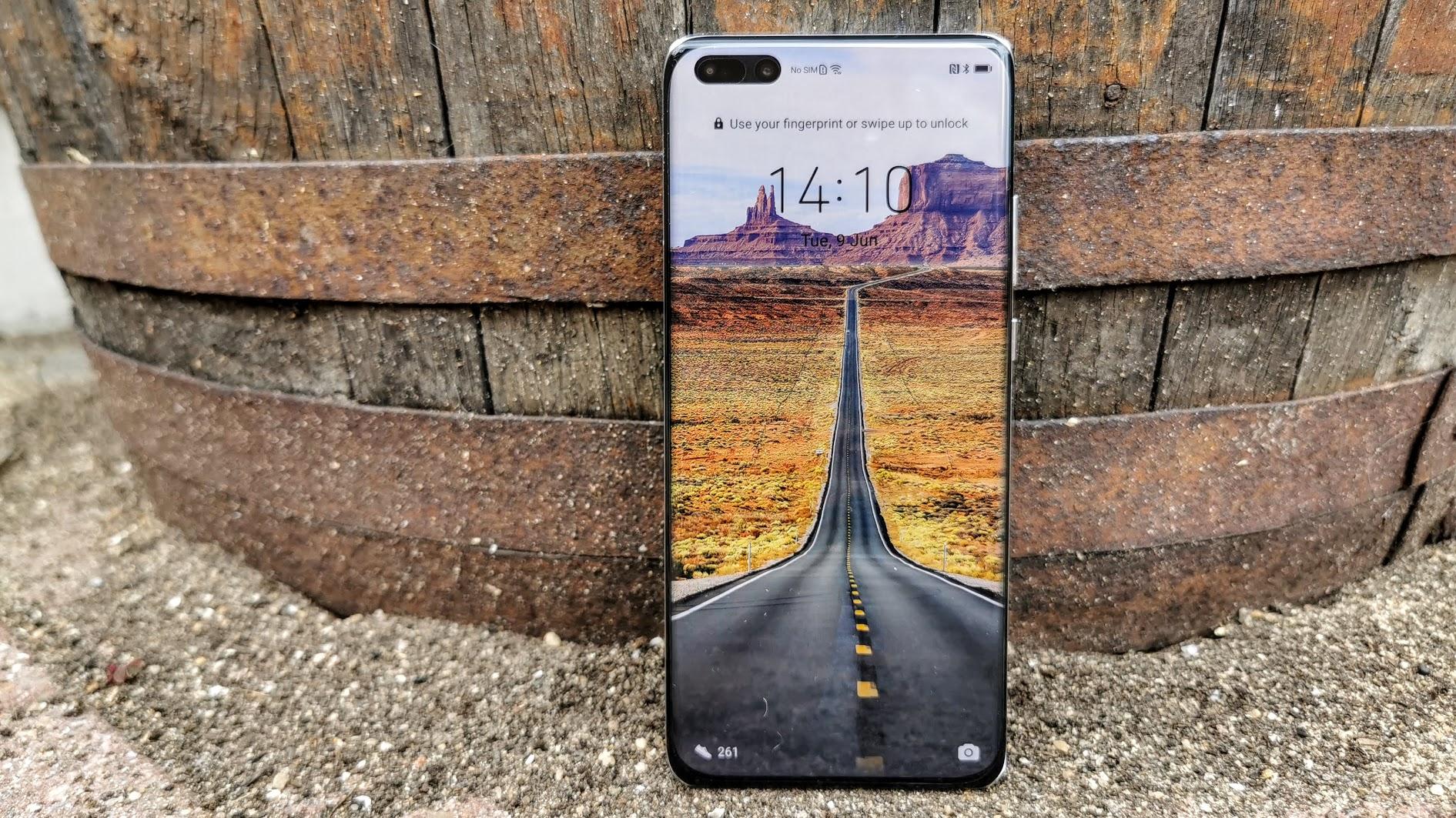 The P40 Pro+ is a fantastic phone with some of the best cameras of any phone (at the time of review). This makes it all the harder to say that it’s not one we can recommend you buy unless you simply want it for those cameras and have a second device that allows you to use the apps which you can’t get on the Pro+.

With no direct successor on the horizon – there’s no sign of a P50 Pro+ to speak of – the P40 Pro+ might be the last of its kind, with Huawei instead pushing in other areas, like foldables and wearables.

If you’re put off by the absence of all things Google (and the steep asking price), you should instead consider the likes of the Oppo Find X5 Pro, Samsung Galaxy S22 Ultra or iPhone 13 Pro Max. 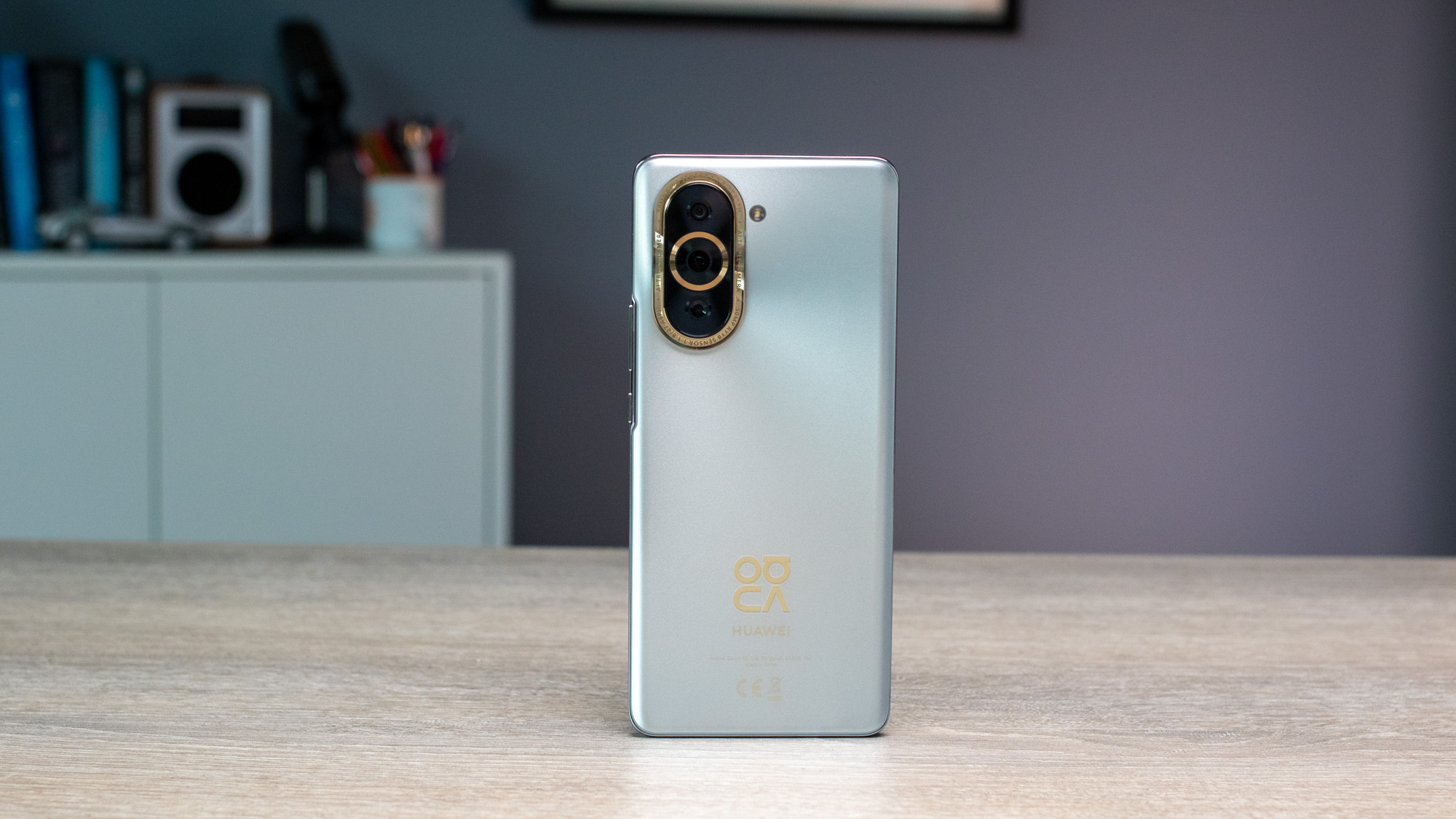 Huawei’s hardware holds its own against the competition for the most part, especially thanks to the excellent main selfie camera and slender design, but the Nova 10 Pro is held back by the lack of 5G and official Google software support.

Though this is a perfectly competent handset for calls, texts and general photography, it’s harder to love when it has no 5G or Google support than some of Huawei’s high end models that really excel on the photo front.

If it cost a little less it might have been one to go for if you don’t use Google services and weren’t fussed about having to sideload some of your favourite apps because they may not be available in Huawei’s AppGallery app store. But at £629/€699 this really isn’t a great deal. If you must have Huawei, you should actually spend more and get a superlative camera phone like the Mate 50 Pro.

What should I look for from a Huawei phone?

The company has flagship devices in its P and Mate lines, which are among the best smartphones out there – still true globally even now (in terms of hardware, at least). The P series is slightly more mainstream in its thinking, while the Mates are often photo-minded phablets with undertones of business and productivity. That said, the lines have blurred somewhat over the generations. Luckily, you’re left with excellent phones either way.

A Huawei phone doesn’t have to be brand new to be worth considering. The older  P30 range is still great too (and can still be had with Google Play Services).