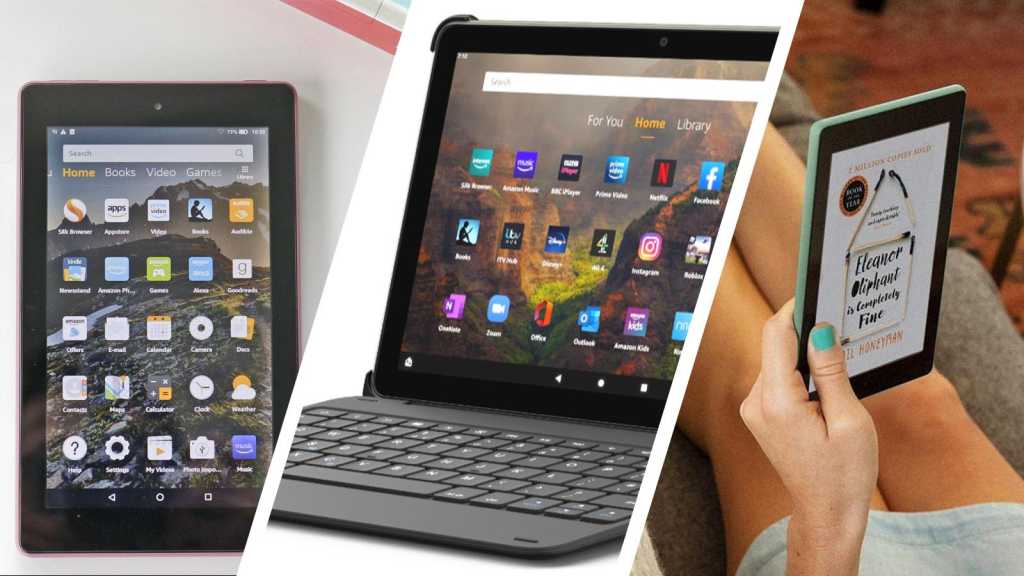 The choice of tablets is much smaller than it is for smartphones. You’ve got Apple iPads and Samsung’s Galaxy Tab range, but if you’re on a tight budget, then Amazon is really your only option.

It’s a common misconception that Fire tablets are the same as Android tablets, but they’re not. They don’t have Google apps such as Gmail, Google Maps, the Chrome web browser and YouTube. There’s no Google Play Store either. Instead, there’s Amazon’s Appstore which doesn’t have the breadth of choice of Google Play.

We’ll explain everything you need to know about Amazon Fire tablets and how the various models compare so you’re in a position to decide which – if any – is the right one to buy.

Fire tablets are great value, but it’s a good idea to check if the apps you want to use are available before you buy. You can do this by searching on Amazon’s website and looking in the results to see if a Fire tablet app is listed. If not, it’s not available.

Most Google apps – including YouTube – are also accessible as websites via Amazon’s web browser. For some people that will be an acceptable workaround but, for others, a deal-breaker.

Fire tablets have their own apps for email, photos, web browsing and of course its own video service, Prime Video and music streaming from Amazon Music.

Ultimately, Amazon wants you to use these services instead of Apple or Google’s, buy apps from its Appstore, download books from its Kindle store and buy physical products from its shopping section. Fire tablets are effectively an Amazon shop window, but that’s largely what Apple does with its iPads, too, so it’s not as bad as it might sound. However, do note that unless you pay $10/£10 to upgrade to the ‘without ads’ model when you buy a Fire tablet, the lock screen will display adverts, which can irk.

It you already buy products from Amazon and you want a tablet primarily for entertainment, you may not really notice the difference between a Fire HD 8 and an Android tablet.

As far as apps go, you’ll find Netflix, Disney+, Spotify, Facebook, Messenger, Zoom and other popular ones in the Appstore along with catch-up TV services plus lots of free games and other apps which are more often than not Android versions, because underneath that different-looking interface, all Amazon Fire tablets are based on the Android operating system. If you’re happy to jump through a few hoops it’s possible to install the Google Play Store on a Fire tablet, giving you access to those apps which the Appstore doesn’t have.

Fire tablets are great for kids and adults alike and Amazon offers kids versions of all three models. Those cost more but come with a protective case, a great two-year warranty that covers accidental damage and a 12-month subscription to its kids content, Amazon Kids+, which includes videos, games, apps and books.

For the larger two tablets, there’s also the option of a Fire Kids Pro. These cost the same as the non-Pro versions but have a more grown-up case and a less cartoon-y interface that’s better suited to older kids from around 7-12.

So the question is, which model should you buy? Briefly, here’s a summary of the key specs of the latest versions showing how they compare.

Note: the Plus versions of the Fire HD 8 and HD 10 have wireless charging and extra RAM. They’re otherwise identical to their non-Plus versions but are only available in a Slate colour. 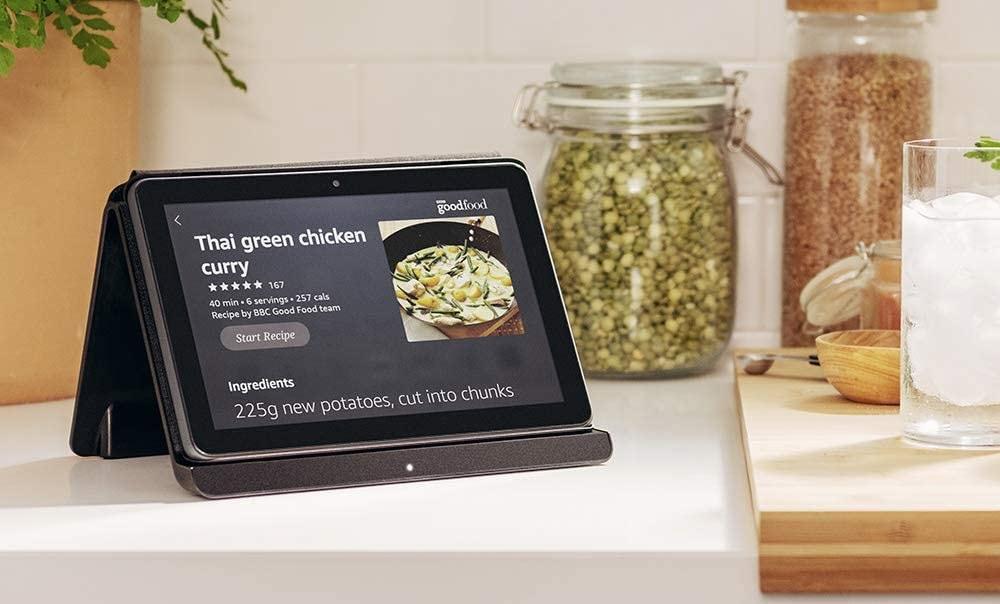 The Fire HD 8 is our current pick of the range. Its screen may be only one inch larger than the Fire 7, but it makes all the difference. It has a higher resolution of 1280×800, too. That’s not full HD, but it’s still enough for its 8in screen.

Cameras are the same on both tablets, but processing power is around 30 percent faster. There’s also more RAM (even more in the Plus model), more storage and you can expand that by up to 1TB using a microSD card.

Another difference is that the HD 8 has stereo speakers and a USB-C port for charging.

Everything about the interface and available apps and services is the same.  You get Alexa, too, and again she’s hands-free and works even when the tablet is in standby with the screen off, so you can consider it like an Echo Dot.

The Plus model costs $20/£20 extra and has wireless charging and works with the optional wireless charging dock (shown in the photo) to turn the tablet into a sort of Echo Show. This is useful for video calls, music videos and watching Amazon Prime videos. But note that the standard model also has Show Mode, so you only need something to prop it up, and maybe to plug it in to the mains to get the same effect.

As with all three Amazon tablets, there’s a Kids Edition of the Fire HD 8. It comes with a bumper case, year’s subscription to Kids+ and a two-year warranty. 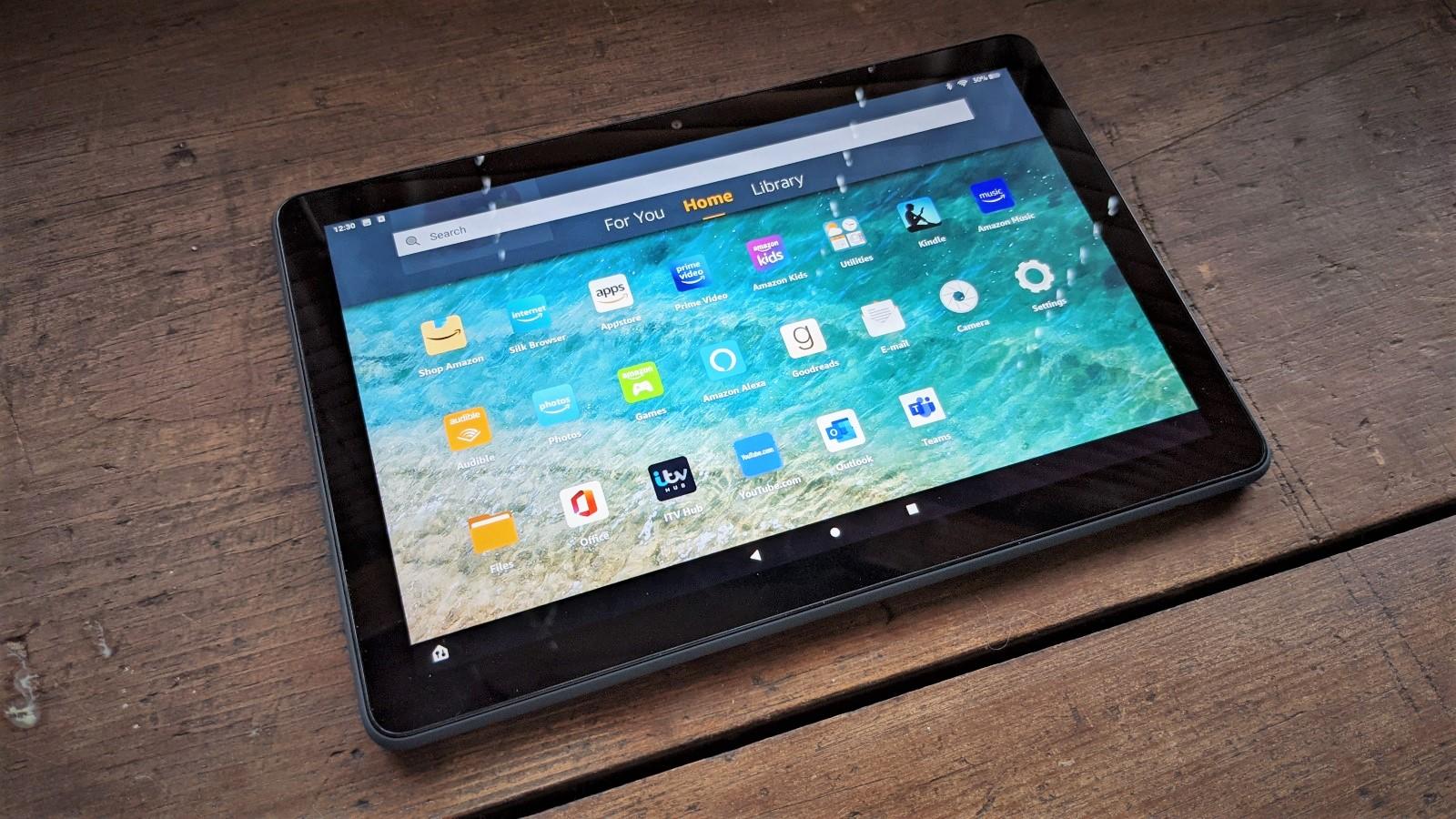 The Fire HD 10 costs a lot more than Amazon’s smaller tablets, but it also gives you a lot more. The 10.1in screen is obviously bigger, but the resolution of 1920×1200 means it has a higher pixel density of 224ppi. That means it looks sharp and – as with its siblings’ – it’s a great screen with vibrant colours and good viewing angles.

It has a faster processor and 3GB of RAM as standard which means it’s more responsive than the cheaper tablets here. There’s also a Plus model available which has 4GB of RAM, wireless charging and, like the HD 8, supports Show Mode that makes it very much like an Amazon Echo Show.

Charging is via USB-C and the battery lasts for 12 hours. 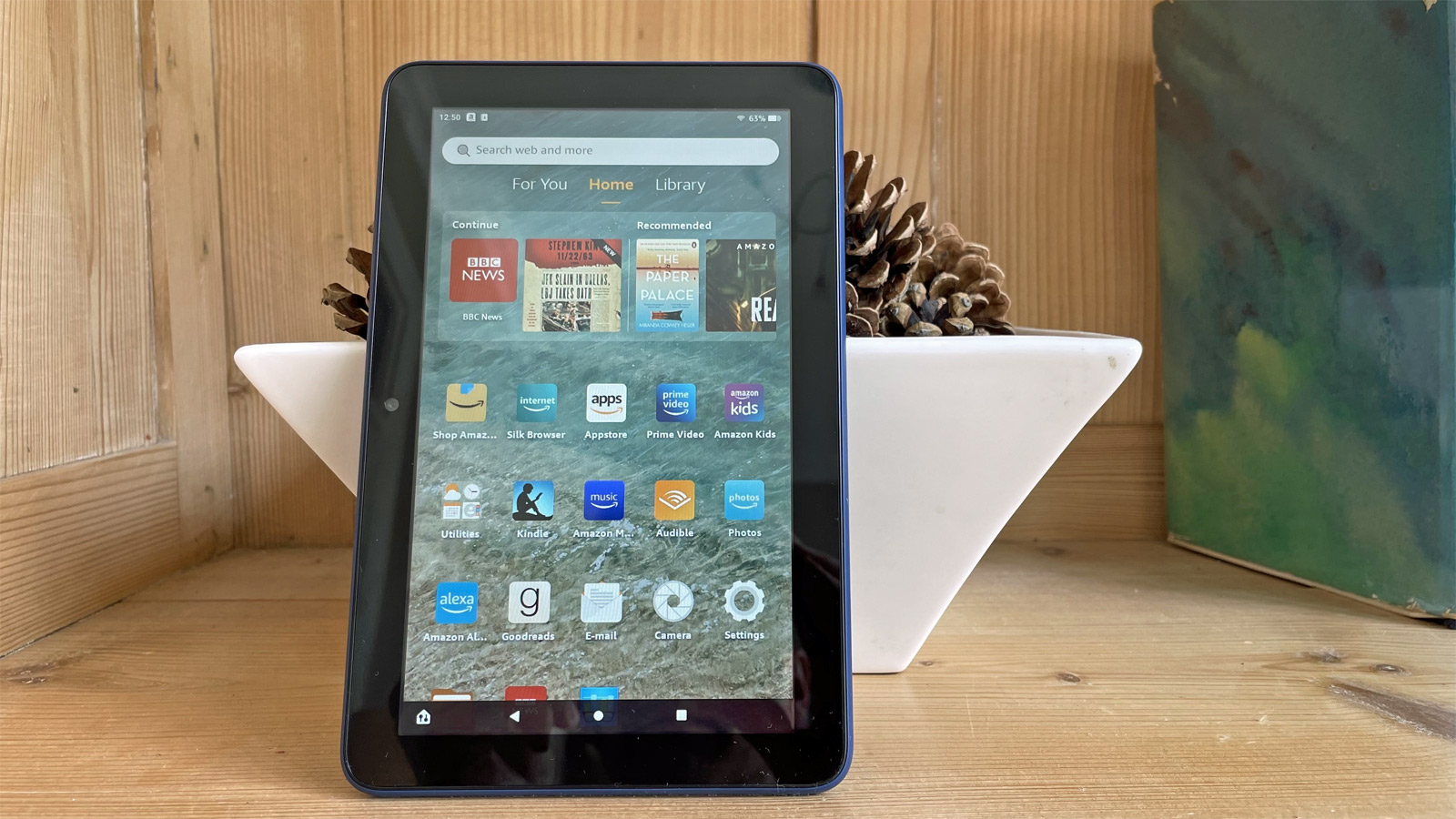 The Fire 7 is the smallest in the range with, as you’d guess, a 7in screen. It’s great value, despite the price increase for this new model as it has better battery life (10 hours) and

The reason you may want to steer clear is because saying that it isn’t hugely powerful is an understatement. Obviously, you shouldn’t expect a lightning-fast tablet for this price and you’ll have to put up with waiting a little longer for apps to load than you’d expect. Basically, it’s the best option for kids because they are unlikely to complain about it… unless you’re buying it to replace a broken iPad, which won’t go down well.

The screen has good colours and good viewing angles, but the low resolution of 1024×600 means it’s not as sharp as the HD 8. Again, kids won’t notice this.

The Fire 7 has hands-free Alexa like its more expensive siblings, which is nice, and this new model has a USB-C charging port that’s much easier to use than the annoying old microUSB. And there’s still a headphone jack.

Remember that you don’t necessarily have to buy the Fire 7 Kids Edition. Even the $59/£59 version comes with the Amazon Kids app that offers great parental controls and there are dozens of free games available in the Appstore that kids will love.

The cameras are poor, but that is a trait of all Amazon Fire tablets, sadly.