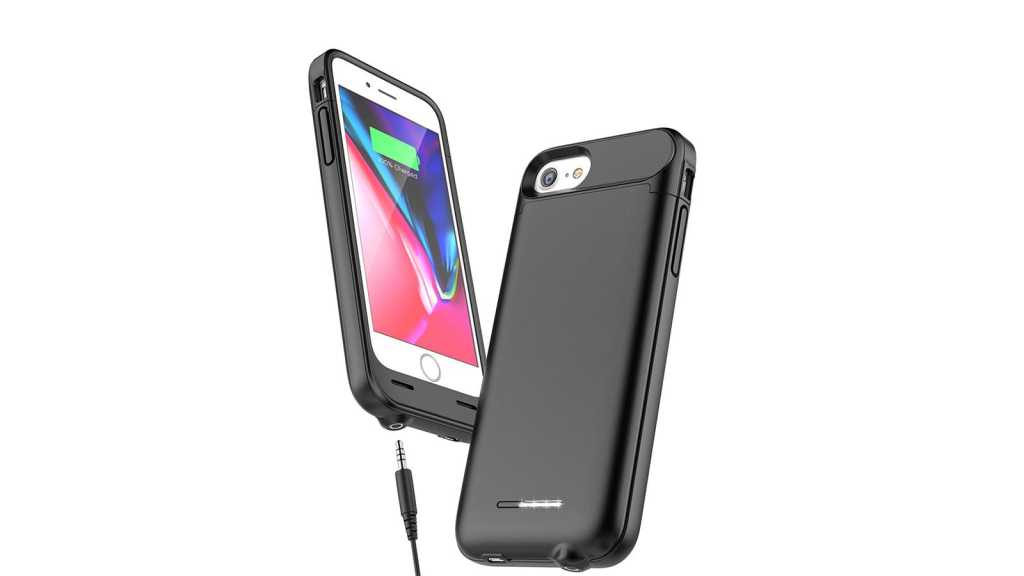 It may have been almost four years since the iPhone 8 and larger iPhone 8 Plus were released, but they remain very capable and popular phones – even if Apple no longer sells them.

They were the last smartphones to come with Touch ID, with the iPhone X launched alongside it ditching the fingerprint scanner altogether – that was until the revive of the design with the budget-friendly iPhone SE (2020) anyway.

The iPhone 8 has just a 1821mAh battery, while the 8 Plus comes with 2691mAh. While its true that Apple’s synergy between hardware and software means it’s not as reliant as Android on battery capacity, it’s hard to believe that will be enough for most people.

Apple claims its software optimisations will get you 12 and 13 hours of battery life respectively, but that number will vary hugely depending on the apps and features you use, and may decline soon after purchasing your new phone.

As a result, many of our phones start to fade too early in the day, and it’s rarely convenient to recharge while you’re on the move – even with the addition of wireless charging.

You can buy yourself a portable power bank, but usually that means carrying around an extra cable, too – and taking up valuable bag or pocket space.

In that case (no pun intended), your best option is a battery case. That way, you can charge your phone while continuing to use it like normal.

Many options will still allow you to continue using wireless charging, a feature Apple introduced on the iPhone 8 and 8 Plus. Here’s our round-up of the best battery cases for the iPhone 8, 8 Plus and even the iPhone SE (2020), which is identical to the iPhone 8 in design. 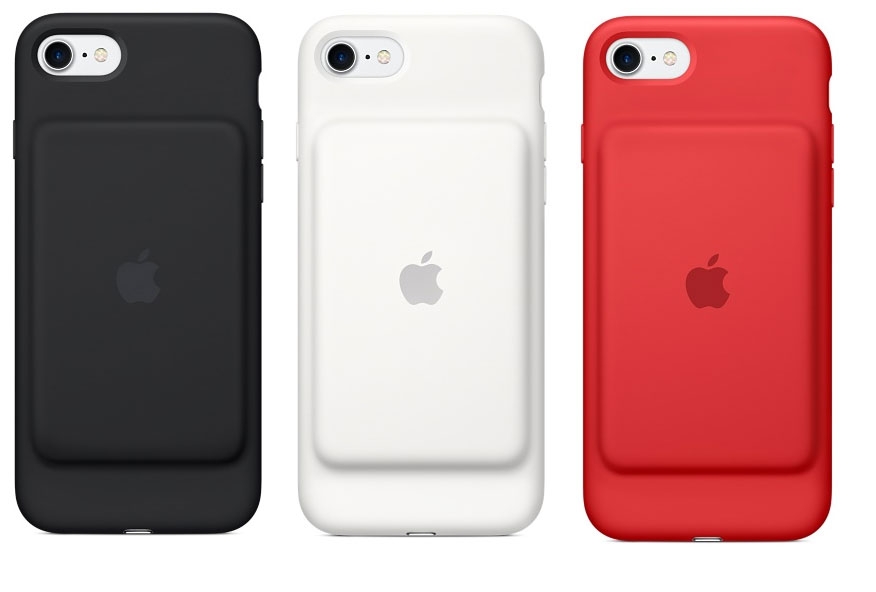 While Apple doesn’t technically offer a Smart Battery Case for either the iPhone 8 or 8 Plus, it does sell them for the iPhone 7. 7 Plus users, however, are out of luck.

We slipped an iPhone 8 easily into Apple’s iPhone 7 Smart Battery Case with no problems. The camera at the back isn’t impeded, and all the buttons work just fine.

Some people hate the looks of the iPhone Smart Battery Case, with its humped back, but we love its one-piece design and the way it charges the phone all the time rather than waiting for you to switch on charging from the case. Obviously, it’s all properly certified by Apple!

At 102g it’s lightweight but will obviously add some bulk to the normally slim iPhone.

You can see how much charge is left in the case by swiping right on the iPhone home screen. There aren’t any lights on the case itself, although there is one inside so you know it’s charging itself when plugged in without the phone.

It charges and syncs through a Lightning slot so there’s no need to mess around with fiddly Micro USB cables.

There’s easily enough charge to get you through over a day’s heavy usage.

My own Apple Smart Battery Case (used with an iPhone 7) already has a couple of nicks in it – proving that it also does a good job of protecting the iPhone from knocks and drops. Long-term testing did suggest that the case begins to tear at the edges after about a year, and we saw this degradation on a couple of Apple cases. That said, we were tempted to buy from Apple again.

While Apple relisted some of its iPhone 7 cases as now iPhone 8 / 7 it hasn’t relabelled the Smart Battery Case. 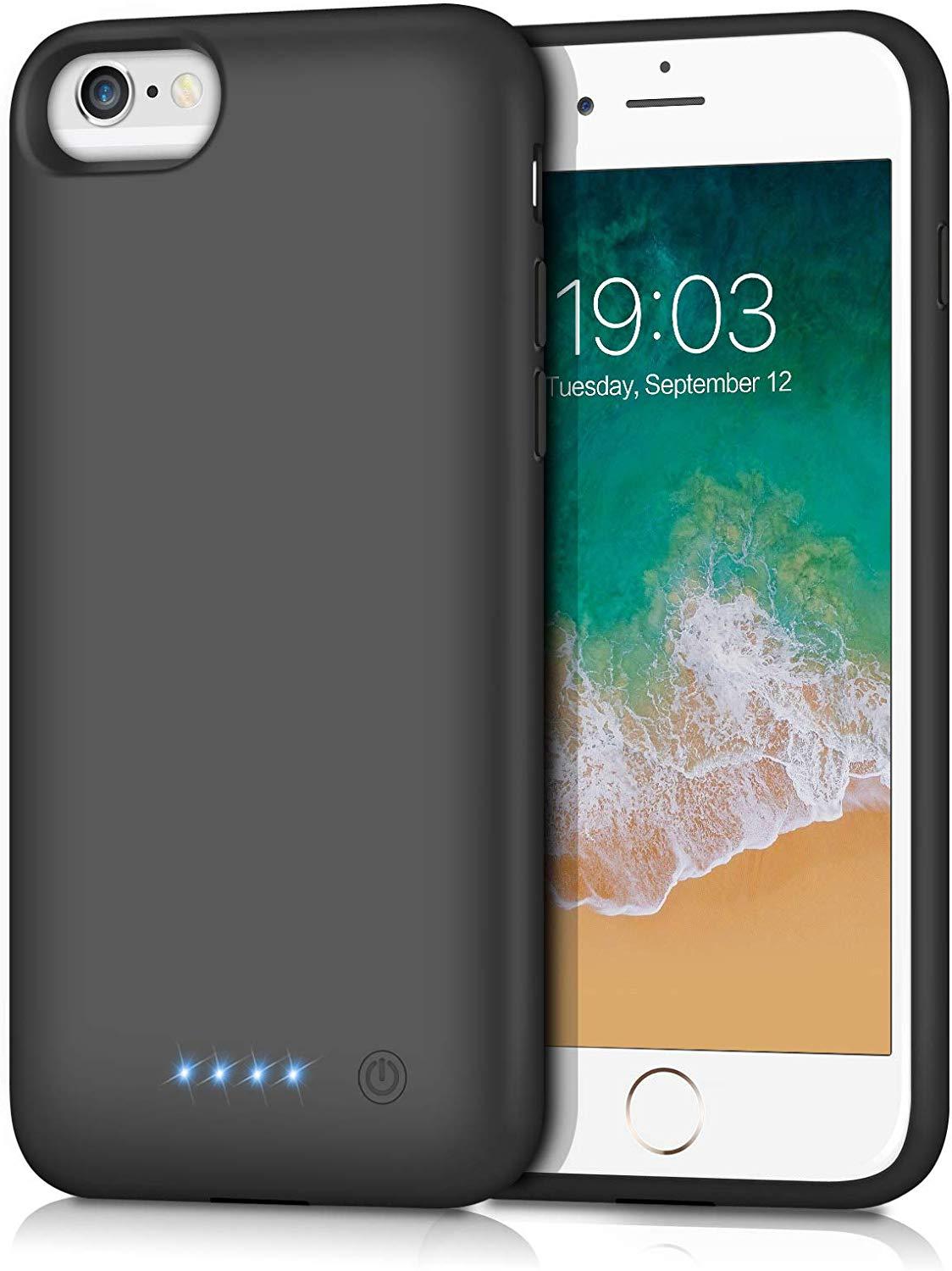 Kilponen’s battery case provides a significant battery boost in the thinnest possible package. It does a good job, too, with the 8500mAh able to fully charge your iPhone 8 Plus more than four times.

It adds just 2.6cm of bulk to your device, meaning you won’t notice it in the same way you do with some high-capacity battery chargers.

You can easily keep the case on all day, turning it on when you need it, but at 200g it won’t weigh you down if you need to throw it in a bag.

In terms of protection, the case provides 360° support thanks to a specially designed frame and smooth hardened plastic design.

It uses the standard four lights on the back of the case to indicate how much charge is left, each light equalling 25% battery.

Apple’s stubborn design choices between 2014 and 2016 also means this case will work with the 6 Plus, 6s Plus and 7 Plus. 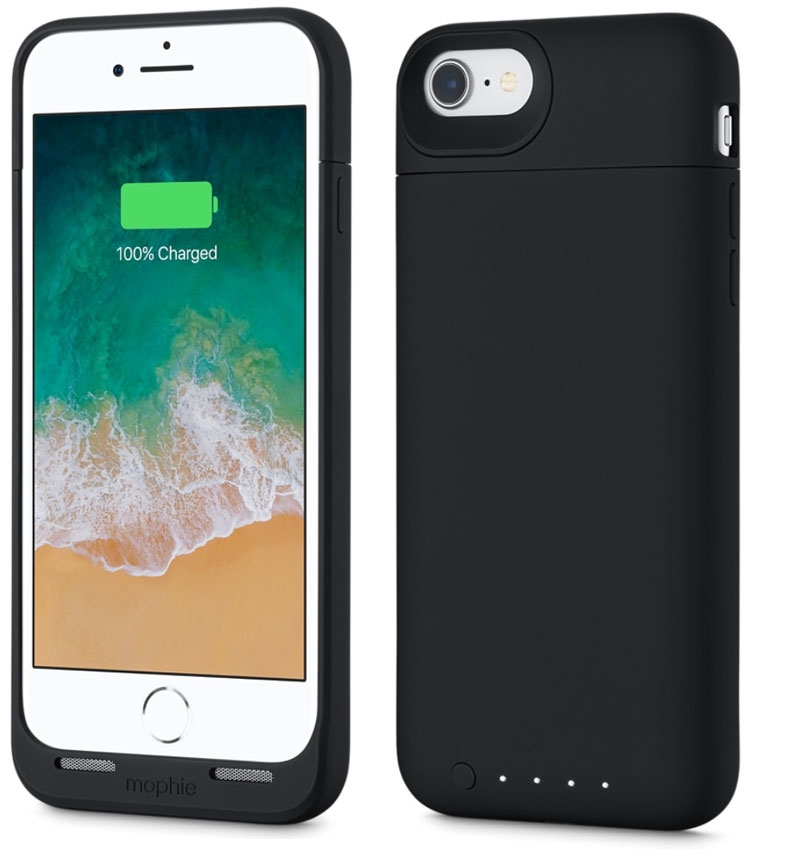 Mophie is the biggest name in smartphone battery cases, and its products are top notch, although more expensive than many of the battery cases you’ll find coming out of China on Amazon.

While the Apple Smart Battery Case fills the iPhone as its battery fades, the Juice Packs wait for you to initiate the recharge – via the button at the back of the case, which also has four LED charge indicator lights so you know how much power is left in the case. 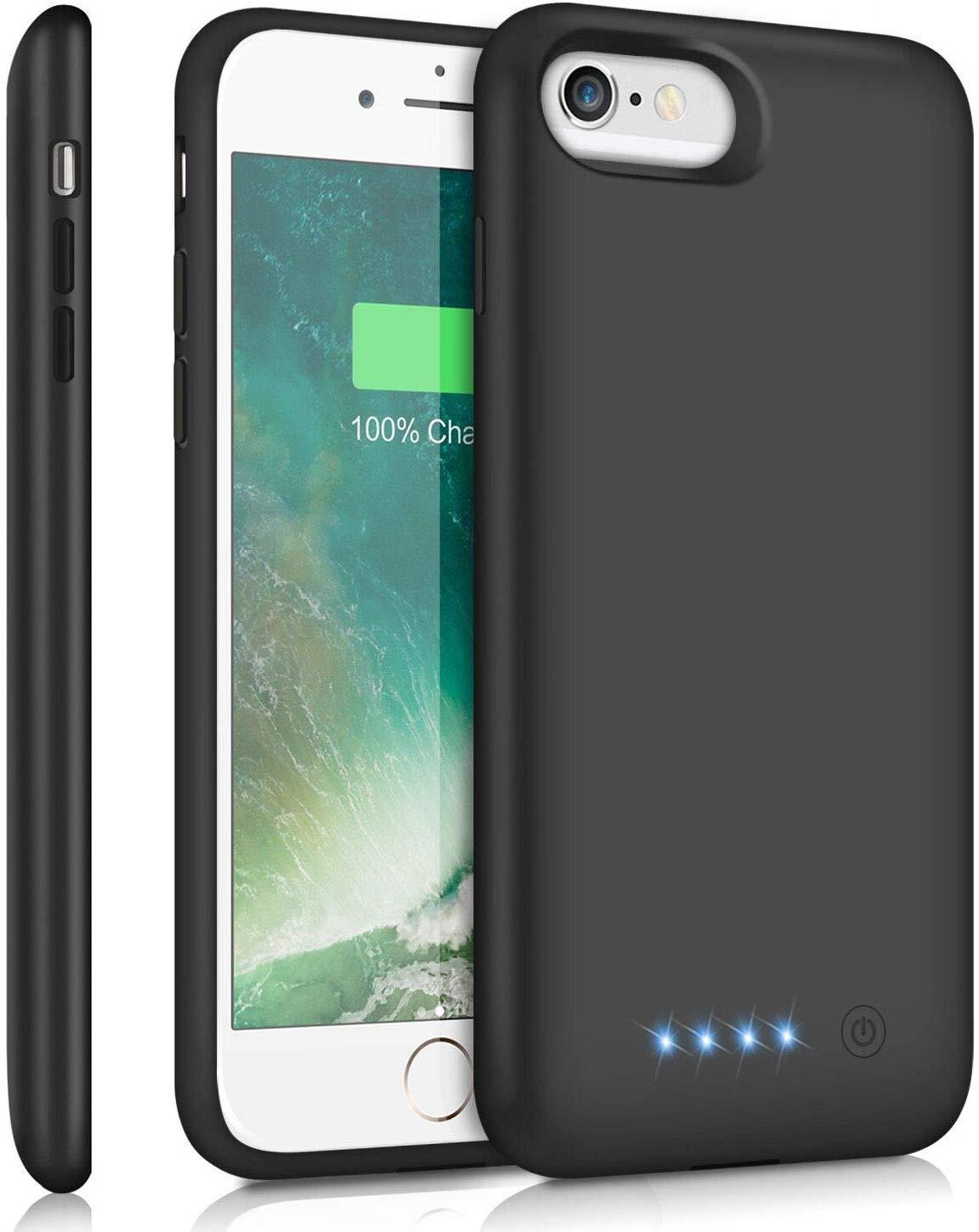 Upon first impressions, it’s hard to imagine that there’s a battery built-in the the Tryswop case. At just 18.5mm thick, it’s among the thinnest battery cases you can find.

The 6000mAh capacity means you can easily get three full charges from this case, while the LED lights on the outside mean you can see how much is left at a glance. Next to it is a simple on/off switch, putting you in control over whether you need a battery boost.

This case is equally adept at protecting your phone, with raised edges and a hard-shell design ensuring it survives any drops or scrapes too. What’s more, if you’d ever like to swap this out for a different case, installation is as simple as sliding your phone in and plugging it into the lightning cable. 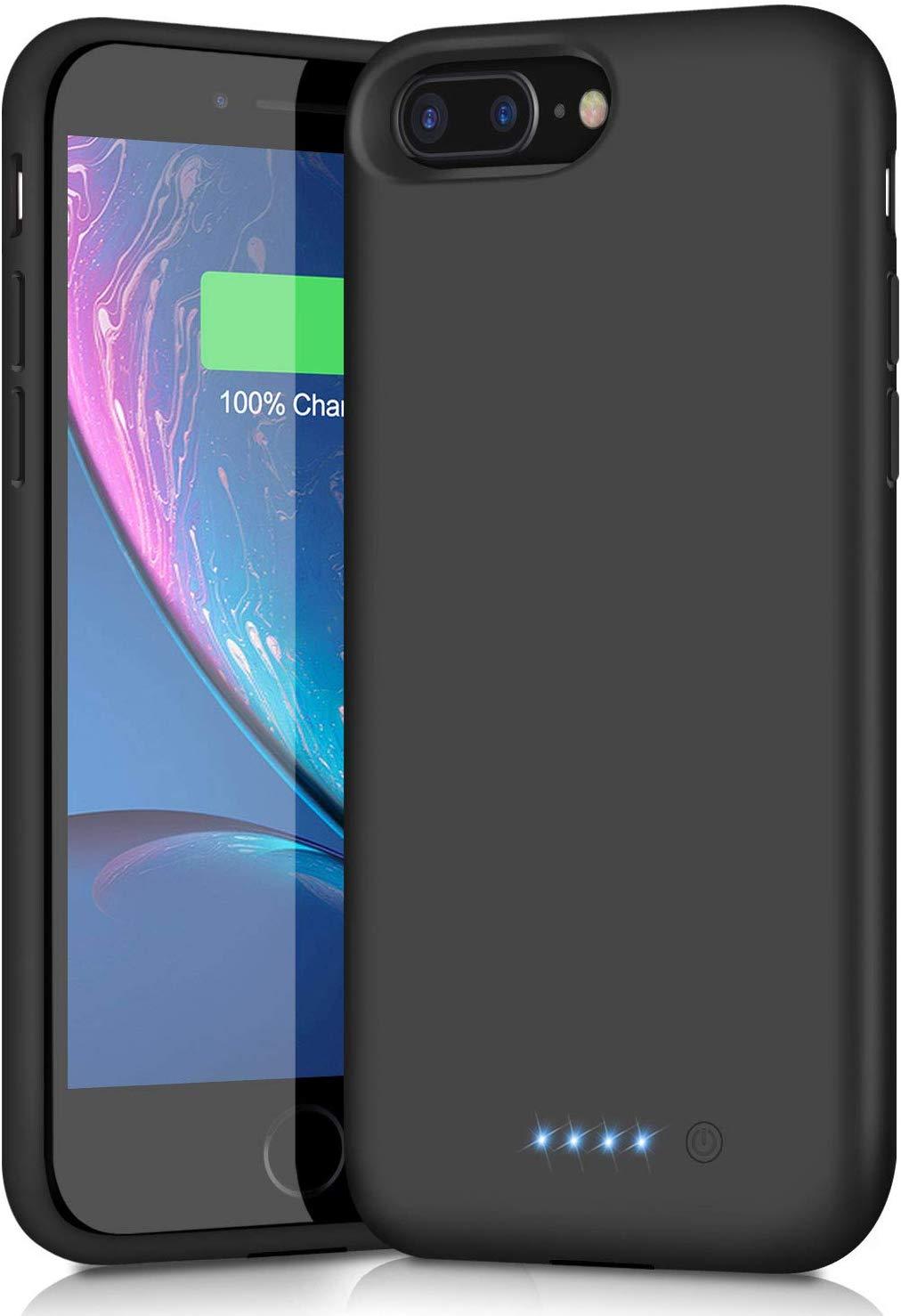 Like many entries in this round-up, AOPAWA’s battery case is compatible with iPhone 6 Plus, 6s Plus, 7 Plus and 8 Plus.

At 8500mAh, it can easily provide your phone with at least three full charges. It also comes with sync-through technology, meaning both your phone and the case can be charged at the same time.

It case fulfils its purpose as a method of protection, with tough build materials and a 360 degree scratch guard.

What’s more, despite packing a huge battery, this case will still add relatively little bulk to your device.

While we can easily recommend it, there’s the added peace of mind that the case comes with a 24-month warranty.