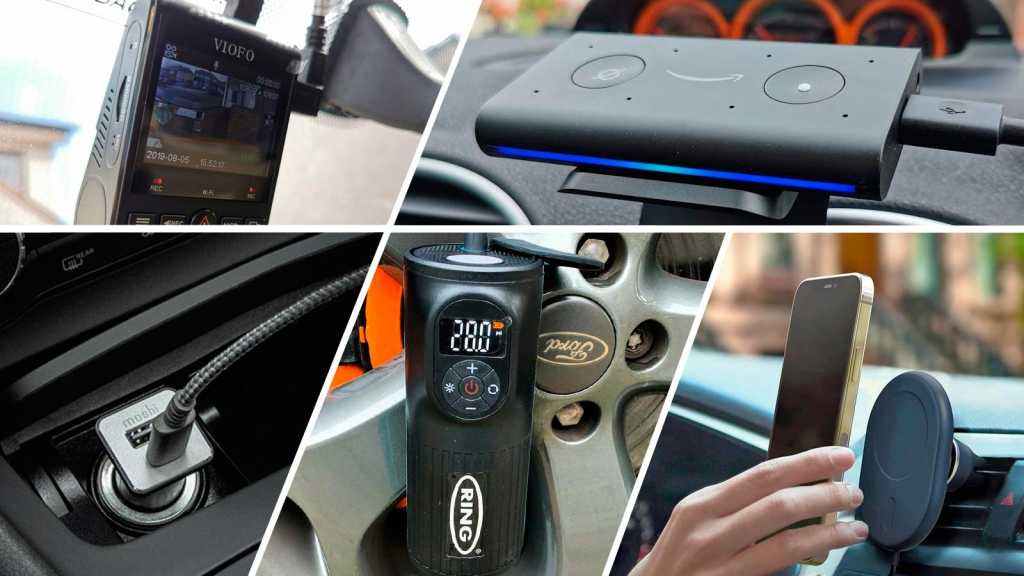 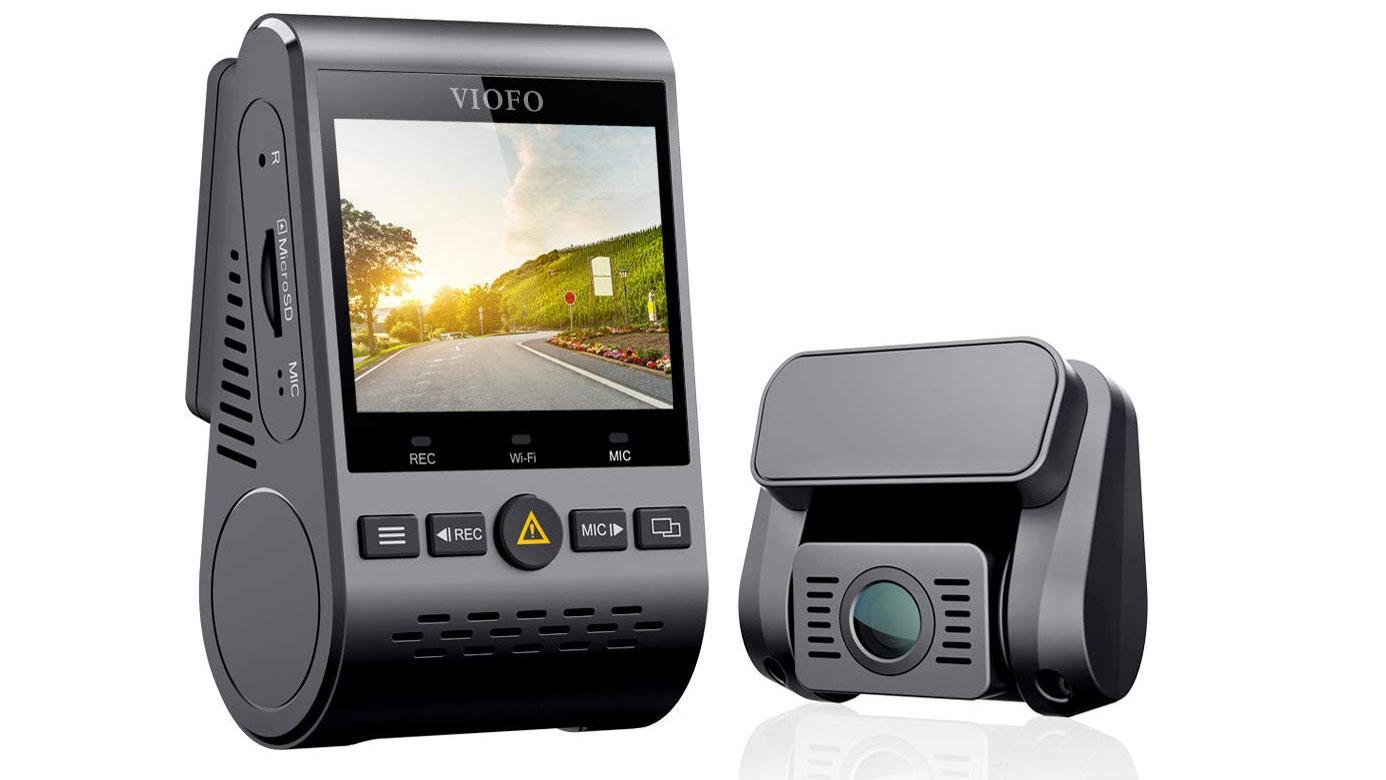 If you buy only one gadget for your car it should be a dash cam. This records video constantly while you drive providing a reliable witness if something unfortunate happens.

Our top pick is the Viofo A129 Duo as it combines good image quality with the features you need, and the price includes a rear-facing camera as well.

If you want to use the parking mode to capture incidents when you’re not in your car, you’ll need to use the ‘hard wire’ kit which takes power from your car’s fuse box. That isn’t as difficult as it sounds, but you may prefer to pay someone to install that for you.

For alternative choices, read our full roundup of the best dash cams. 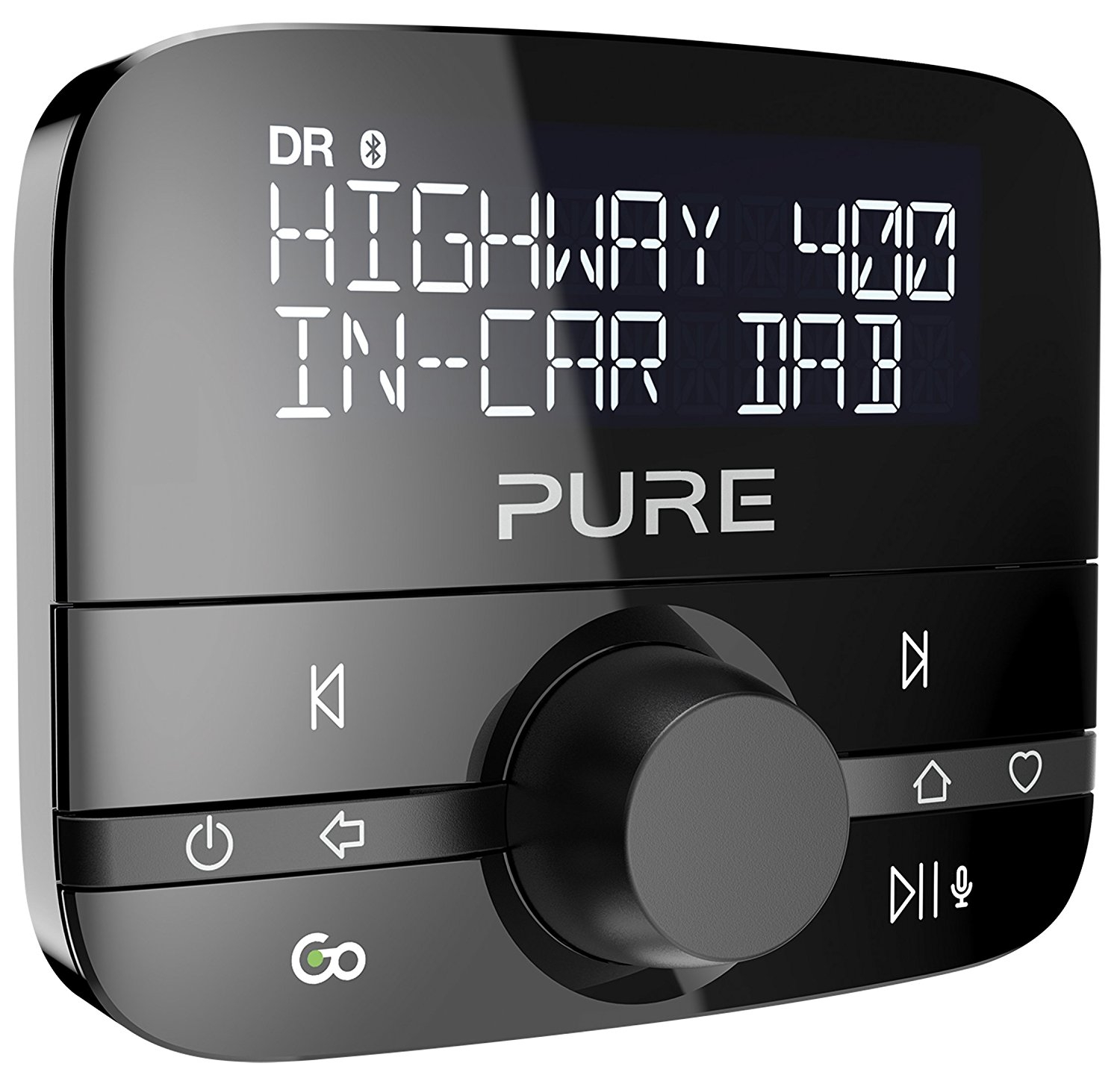 Found in a lot of new cars, but likely lacking from older models is DAB radio. This is the digital equivalent of FM and brings not simply audio quality improvements but also a much wider choice of stations and some handy extra features.

Pure’s Highway 400 offers an easy way to add DAB radio to your existing car stereo, even if it doesn’t have an aux input. It gets power from your cigarette lighter socket and you simply run a wire up to the top of the windscreen (just like a dash cam) for the antenna.

As well as DAB, it also has Bluetooth so you can play music from your phone through your car stereo, and if you install the Pure Go app you can also use your phone’s assistant.

Read our full review of the Highway 400. 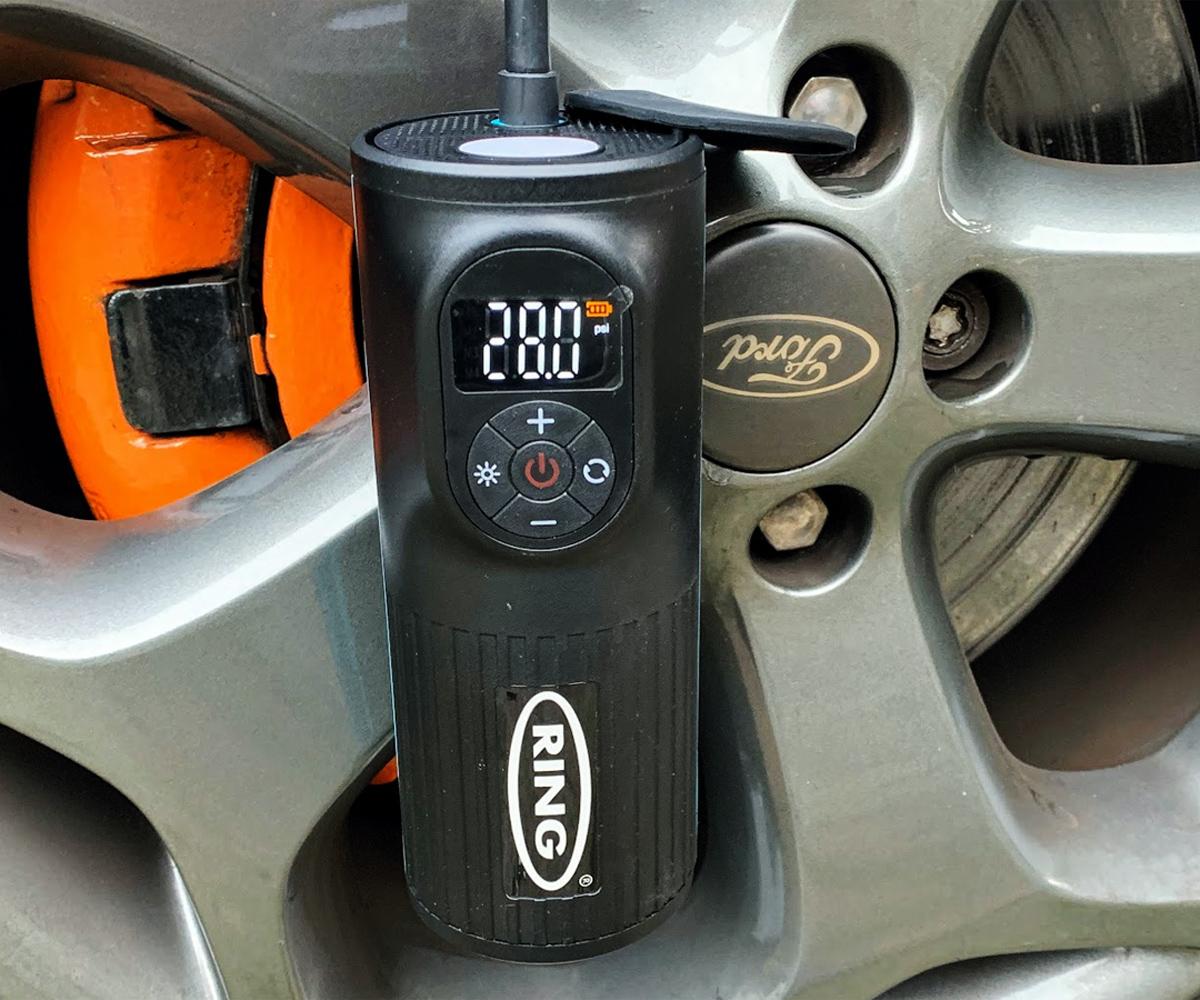 Traditional foot pumps or even inflators that plug into your car’s 12V socket aren’t as convenient as battery powered models.

It’s another gadget that’s possible because of the now-ubiquitous lithium-ion battery.

Ring is a well-established British brand and its RTC200 delivers up to 120psi – way more than you’ll ever need for your car.

It takes few minutes to top up a car tyre from, say, 20 to 30psi and has enough power to do this on all four wheels. In testing it took well under a minute to add 1psi.

Ring says it will inflate a bike tyre from flat in two minutes. It may be able to pump up a car tyre from flat  – not the fastest, but less hassle than a wired pump that connects to your car’s 12V accessory socket. It’s also great for for motorbikes.

There’s a soft carry bag, but usefully the flexible pipe is stored in the side of the unit and adapters are stowed in the base so you can use it to pump up footballs and other things and there’s less chance of losing them than pumps which don’t have slots for these things.

There’s an LCD display on the front and easy-to-understand buttons. You can choose four preset pressures and the RTC200 will stop when that pressure is reached. It’ll also display pressure when attached to a tyre so you can use it to check pressures as well as inflate.

It comes with a a ‘drinks bottle holder’ that’s designed to be attached to the mounting holes present on most bikes, and there’s an LED light for use in the dark. There’s even a USB port so you can charge up your phone or another device. 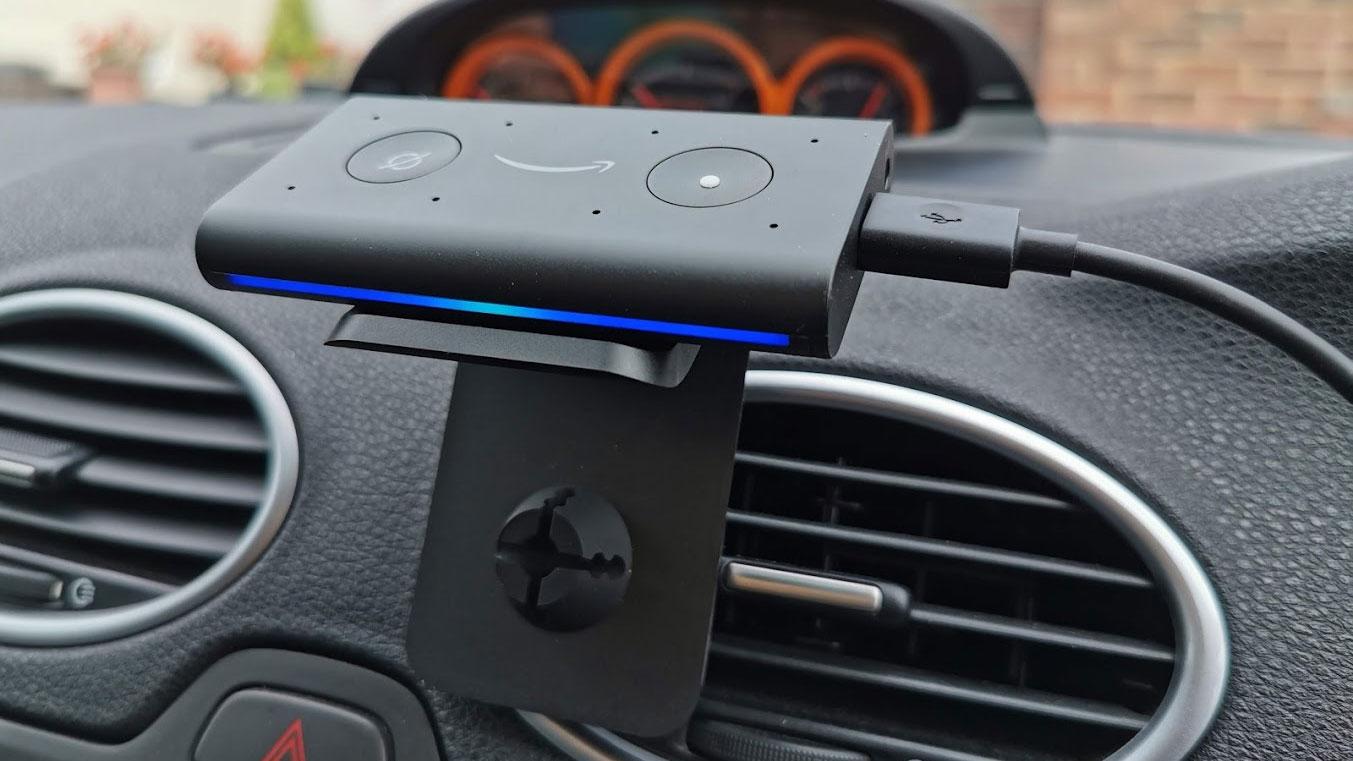 The Auto an Amazon Echo for your car. If you have Echos at home and use them a lot, you’ll like one in your car too.

It’s easy to set up and use, but does require that your car has either Bluetooth or an aux-in port so you can hear Alexa’s voice and any streamed music through your car speakers.

It’s also important to note that you need your phone to provide the internet connection for Alexa, but the Auto is more convenient than simply using the Alexa app on your phone because it’s hands free and you don’t have to wake your phone first (which is illegal while driving in some countries).

Though it can provide spoken directions, that isn’t the Auto’s strength: it’s simply having Alexa available for all the usual things such as playing music, setting reminders, communicating with friends and family and even for smart home gadgets. It’s useful to be able to ask Alexa to turn on your heating while you drive home, for example. 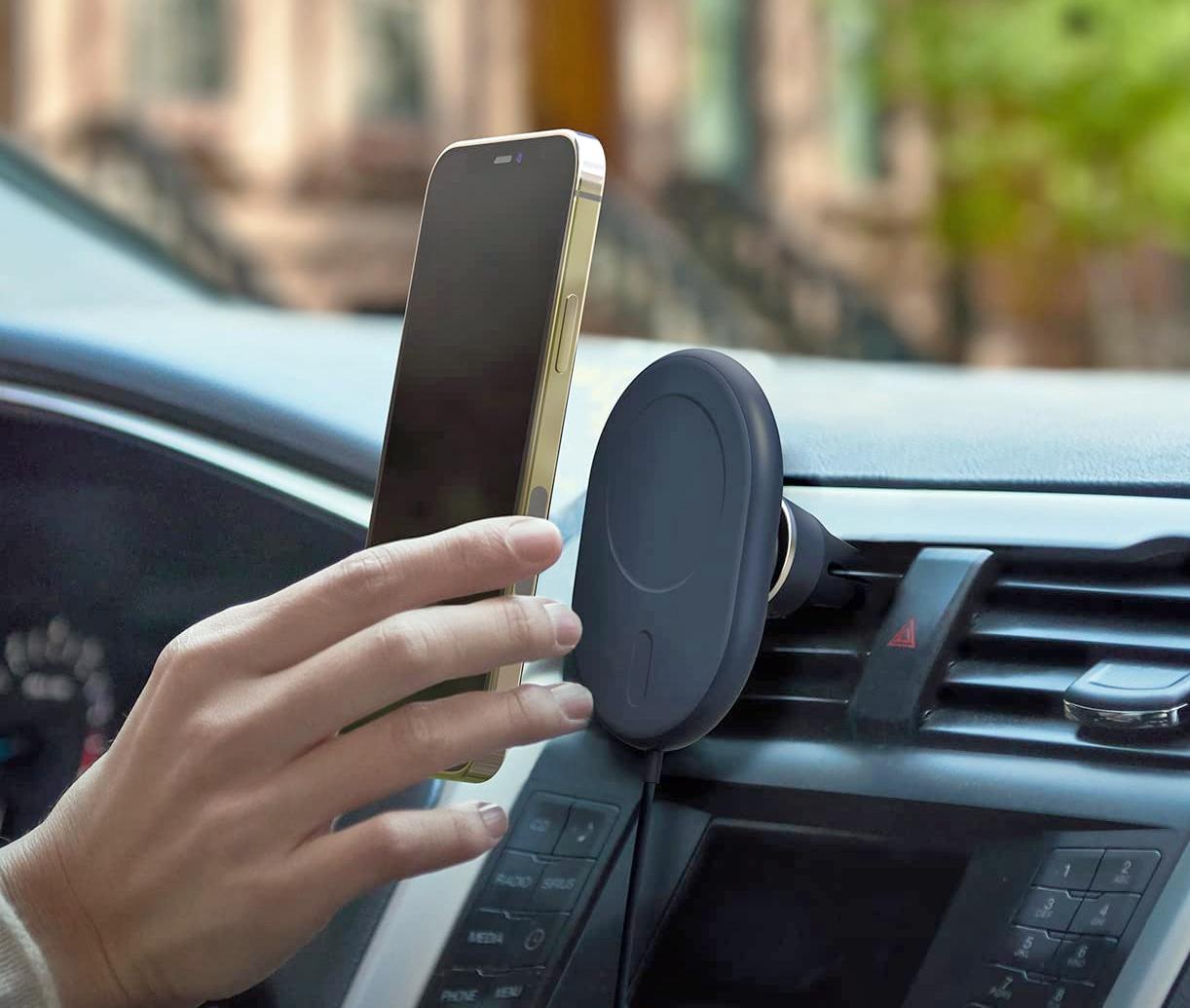 If you own an iPhone 12 or 13 and want to use its built-in magnets with a car mount, you have a very limited choice.

Although iOttie’s Velox isn’t certified for MagSafe charging, it does allow your iPhone to be securely mounted and charge wirelessly.

It does this using 7.5W Qi wireless charging rather than MagSafe, but even Belkin’s mount offers only 2.5W more.

You can mount your phone vertically or horizontally, depending upon how you prefer your sat nav app displayed, and the prongs grip tightly to virtually any air vent.

Under the soft-feel plastic is aluminium, which helps to dissipate heat from your phone – a particular issue in the summer when using sat nav apps and charging at the same time.

If there’s a slight niggle, it’s the captive USB-C cable, which means it cannot be disconnected from the mount – a problem if the cable gets damaged. USB-C isn’t ideal for cars, which typically have the older USB-A ports, but there’s a USB-C charger included in the box which fits into your car’s 12W accessory socket.

Or, you could just buy an adapter to convert USB-C to USB-A if your accessory socket is already used for a dash cam. 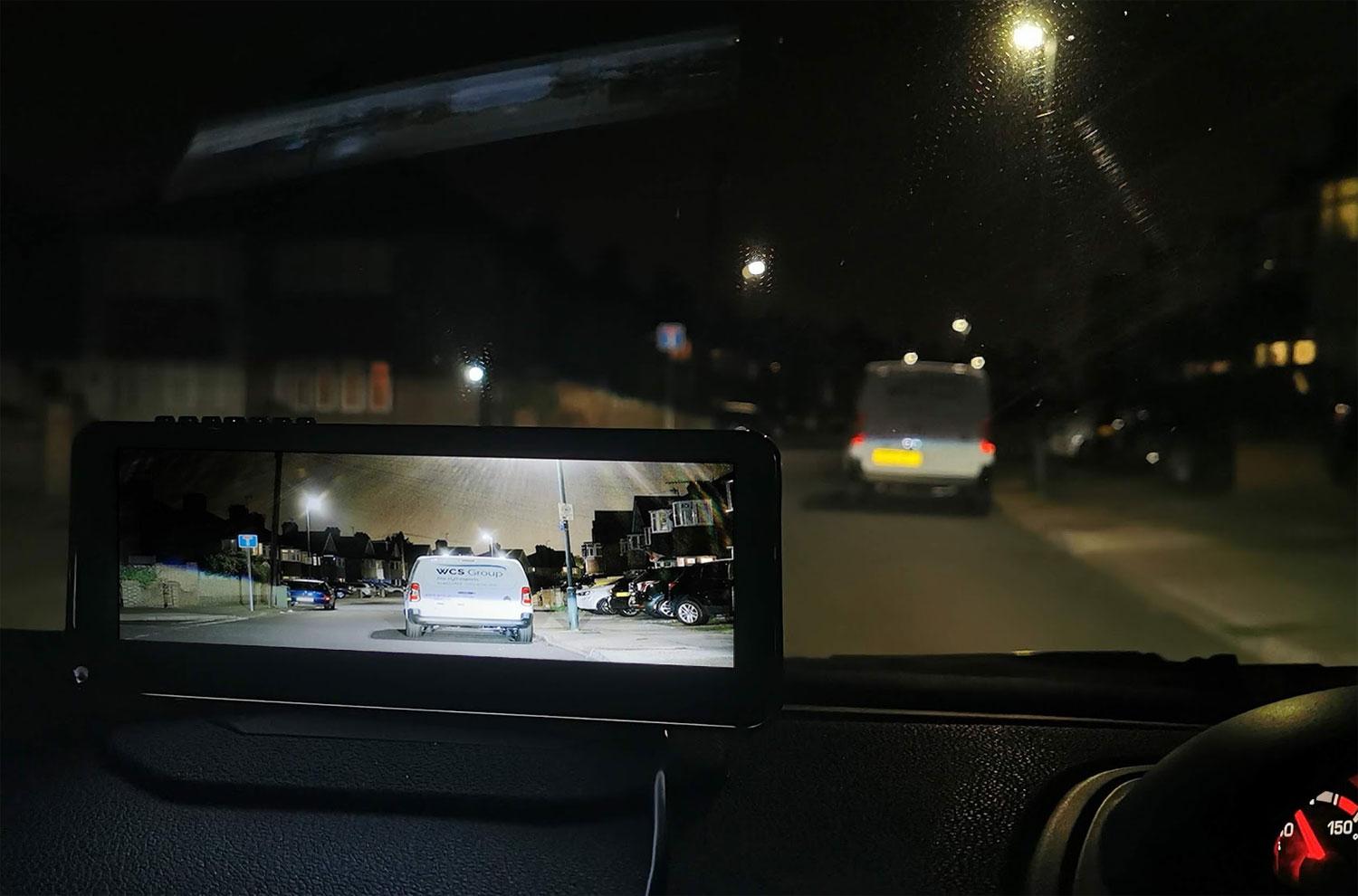 Night vision isn’t an option in most cars, being reserved mainly for high-end models and being an expensive option otherwise. With the Lanmodo Vast, you can add night vision to any car for less than a manufacturer would charge.

It has an 8.2in 1080p screen (though not a 16:9 aspect ratio) and uses a camera built into the rear of the device with a Sony sensor and a 28mm lens. This gives a bright, zoomed in view of the road ahead and makes it a lot easier to see in poor conditions including when it’s raining.

Unlike some built-in systems there are no warnings when hazards are detected, so you won’t get alerts if a pedestrian is spotted. However, this also means no false warnings, as you sometimes get with those systems.

You can use the suction cup to mount it to your windscreen, or the silicone base so it sits on your dashboard. In testing, we found we had to attach the three included sticky pads to stop it moving when cornering or braking hard.

The unit can be powered via your car’s 12V accessory socket or via the OBD port, and both cables are included. There’s a second camera input on the cable which is for a rear-facing camera. You can buy a kit including the 720p rear camera separately for an extra $100.

Buttons on top of the unit allow you to adjust brightness and contrast, switch between front and rear cameras and rotate the screen, which you’ll need to do if you use the suction cup mount instead of the base. Another button switches between colour and black and white.

The display is about the size of a rear-view mirror, so it’s quite large, and it takes a bit of getting used to glancing at it while you’re driving. If you already have a car with extraordinarily powerful headlights you may not need the Vast, but in many cars it really does enhance vision at night, even when there’s street lighting.

If there’s a negative, it’s that the camera has limited adjustment so the screen has to be roughly parallel with your windscreen – you can’t turn it much before the camera isn’t pointing at the road any more. Lanmodo says this is intentional to ensure that the camera doesn’t shake and cause a blurry image on screen.

Build quality is below what you might expect at this price, with cheap feeling buttons and suction mount. Also note that the Vast isn’t a dash cam which records video: it’s just a monitor. 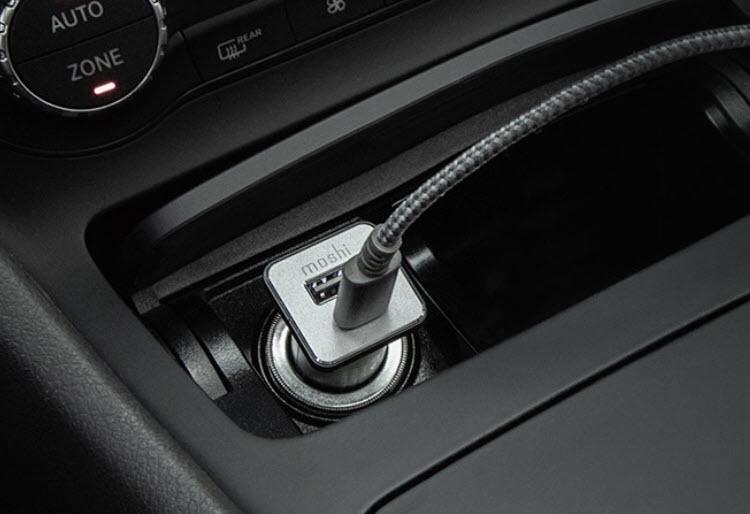 USB car chargers that plug into a vehicle’s 12V accessory (or, if you’re old-fashioned like me – cigarette lighter) socket are common. And cheap. But with the latest phones able to charge considerably faster than they used to, traditional car chargers aren’t up to the job.

Moshi’s QuikDuo is, though. It offers 36W of power shared across two ports: one the old-style and the other being the new USB-C.

Not many phones need more than 36W to fast charge (the iPhone 13 range caps at 27W), but it would have been nice to have had a little more power as you can’t truly fast charge two phones at once, especially if they’re two Samsung Galaxy S20 Ultras, for example, which would require 45W each.

It’s also a bit pricey, but does look good and has over-charge protection.

8. Bestek Inverter – Best for Power on the Go 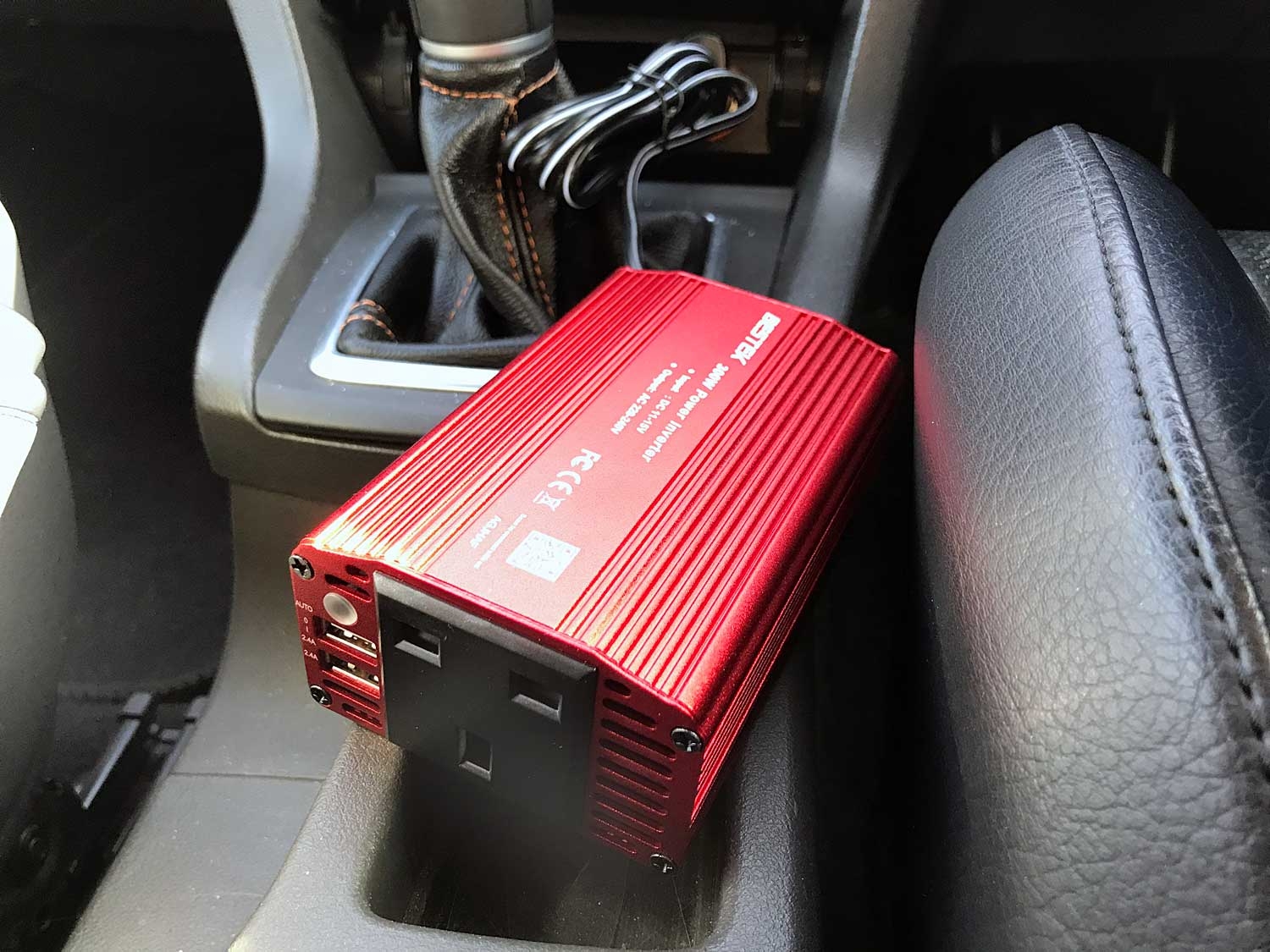 Most cars have USB ports these days, but one you won’t find is a 3-pin UK mains socket. So if you need a power something that can’t be charged via USB – such as a laptop or your DSLR battery – then you need an inverter.

These gadgets convert your car’s 12V DC electricity supply to 240V AC (or 110V for US models).

The Bestek 300W inverter delivers, as the name suggests, 300W. But if you want to connect anything over 150W you’ll need clips to attach it directly to your car battery.

That’s enough to power a laptop, TV or camping fridge. But always check the power consumption of your device before connecting it. Products such as travel irons, hairdryers and straighteners need too much power and can’t be used.

As well as the mains socket (there’s one on the UK model, two on the US version), there are two USB ports with each providing 2.4A of power – enough to charge two iPads at the same time.

A switch on the back lets you turn off the inverter instead of unplugging it from you car’s accessory socket and the internal fan isn’t too noisy.

If you can’t find this exact model, there’s a very similar grey version claiming to be ‘Amazon brand’ for roughly the same price. 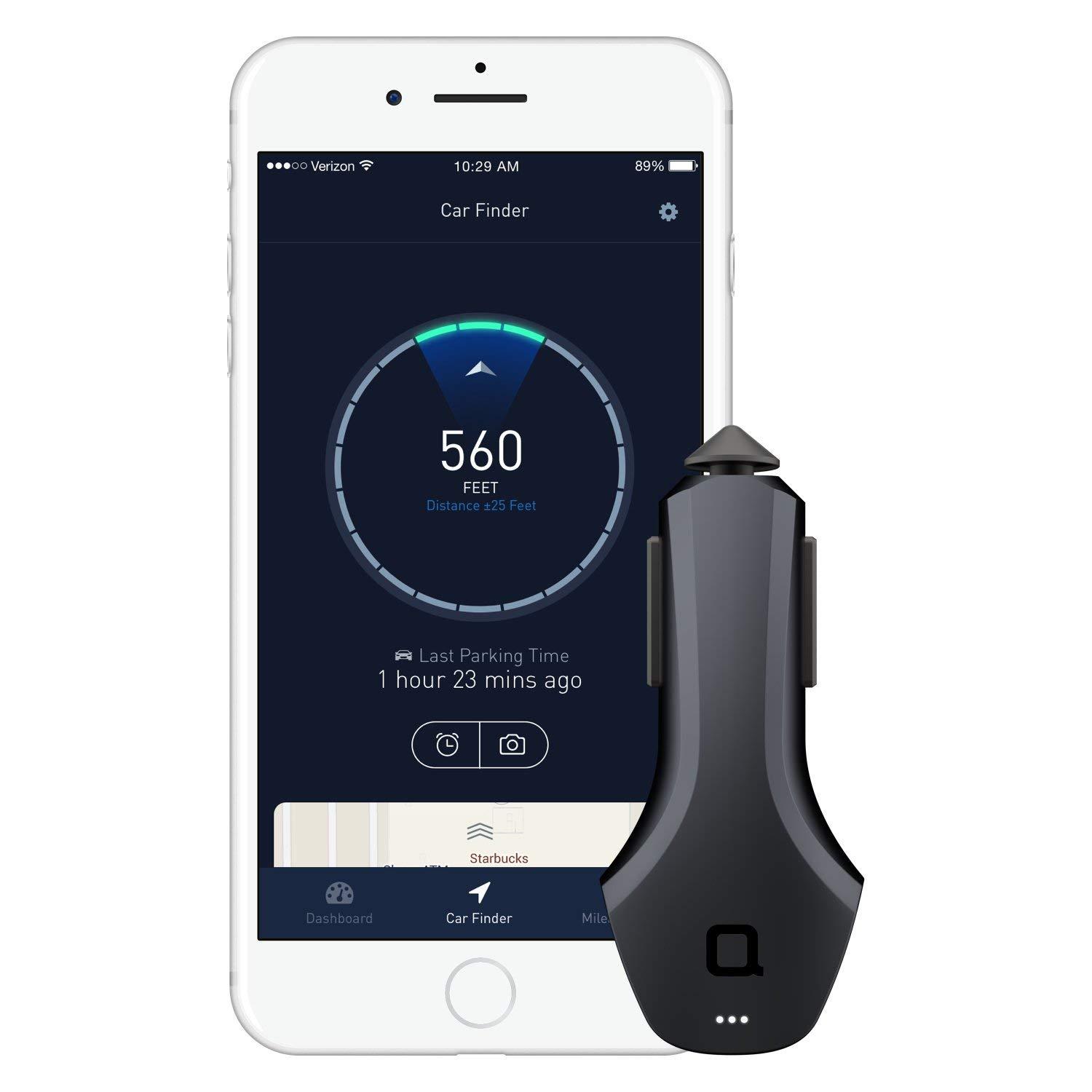 If you want to find your car wherever you parked it but don’t fancy the monthly cost of the V Auto, then check out the Nonda Zus.

At a glance, it’s just a regular USB car charger that plugs into your 12v cigarette lighter. It can charge your phone and a second device simultaneously so your passenger doesn’t feel left out – they’re reversible, too.

But there are hidden smarts providing a number of handy features.

You can use the companion app to locate where you parked your car – useful if you’re the forgetful type – and the location can be shared if you’re picking someone up, for example. You can also set up parking meter alerts so you don’t accidentally run out of time and get a hefty fine.

Furthermore, the Zus can monitor the health of your car’s battery and let you know if there’s something wrong. You can also track journeys including mileage if you need to.