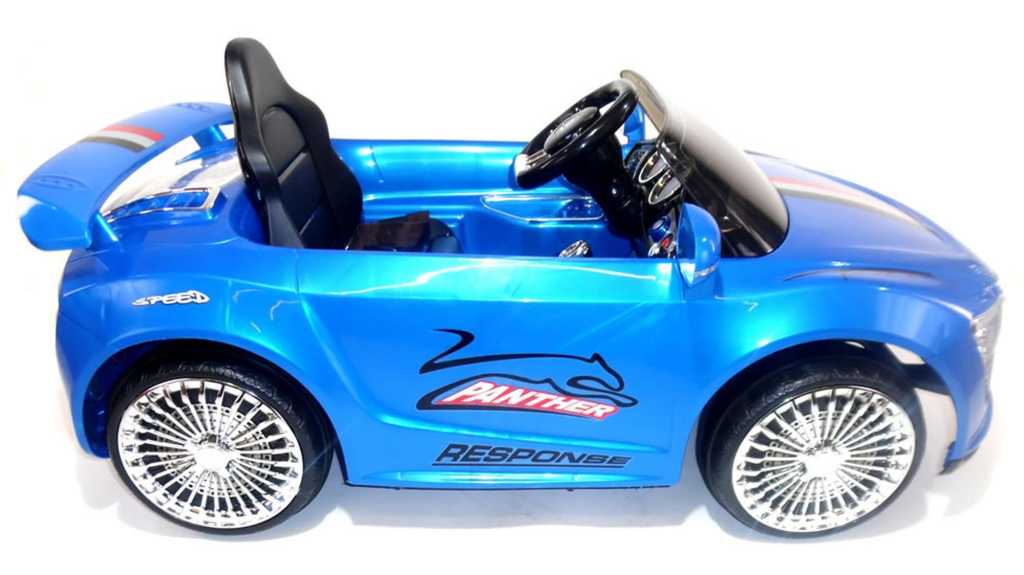 Electric cars (for adults) are super expensive, but kids’ versions are lot more affordable. We’ve rounded up a range from the cheaper 6V models up to licenced versions with more power and more features.

Your buying guide for the best kids cars

Prices range from under £100 to several hundred, and it’s not simply licensing fees that make the difference.

One of the biggest factors is the battery voltage. This – along with the wattage of the motor(s) – determines how powerful the car is. The lowest priced cars have 6V batteries and therefore are quite slow and may not cope with steep hills or rough terrain.

As voltage rises, so does price, but more powerful toys tend to offer multiple speeds as well. This can be a benefit as a child can grow into a car, starting off with the slowest speed and graduating to the higher speed when they’ve learned to control the car.

Watch out for cars that lack reverse, and find out how long the battery lasts between charges, and how long it takes to charge, too.

Most manufacturers will state the age range for the car, and since you’ll be spending quite a bit of money, it’s worth getting a car that the child can grow into and enjoy for several years.

The limiting factor will be the maximum weight the car can take.

Cars that come with remote controls offer extra safety, as the parent can steer or stop the car to avoid it crashing into anything. Note that this is almost always selected by a switch which determines whether the car is controlled by the child or the remote control, so you can’t override their driving remotely.

You may think these are unnecessary at such low speeds, but they’re worth looking out for as an additional safety feature.

Other features, such as a headphone-style socket for plugging in a phone or MP3 player, working lights and opening doors will likely be low on your priority list.

This licensed Land Rover is great for 4×4 fans. It has one seat, opening doors, LED lights and both a safety belt and remote control.

It’s powered by two 35W motors and a 10Ah 12V battery. There are two forward speeds and a reverse ‘gear’.

The key starter is a fun feature and there’s also the option to plug in an MP3 player for on-board music.

The car is happy on grass, as well as tarmac and is especially happy on smooth shopping centre flooring. 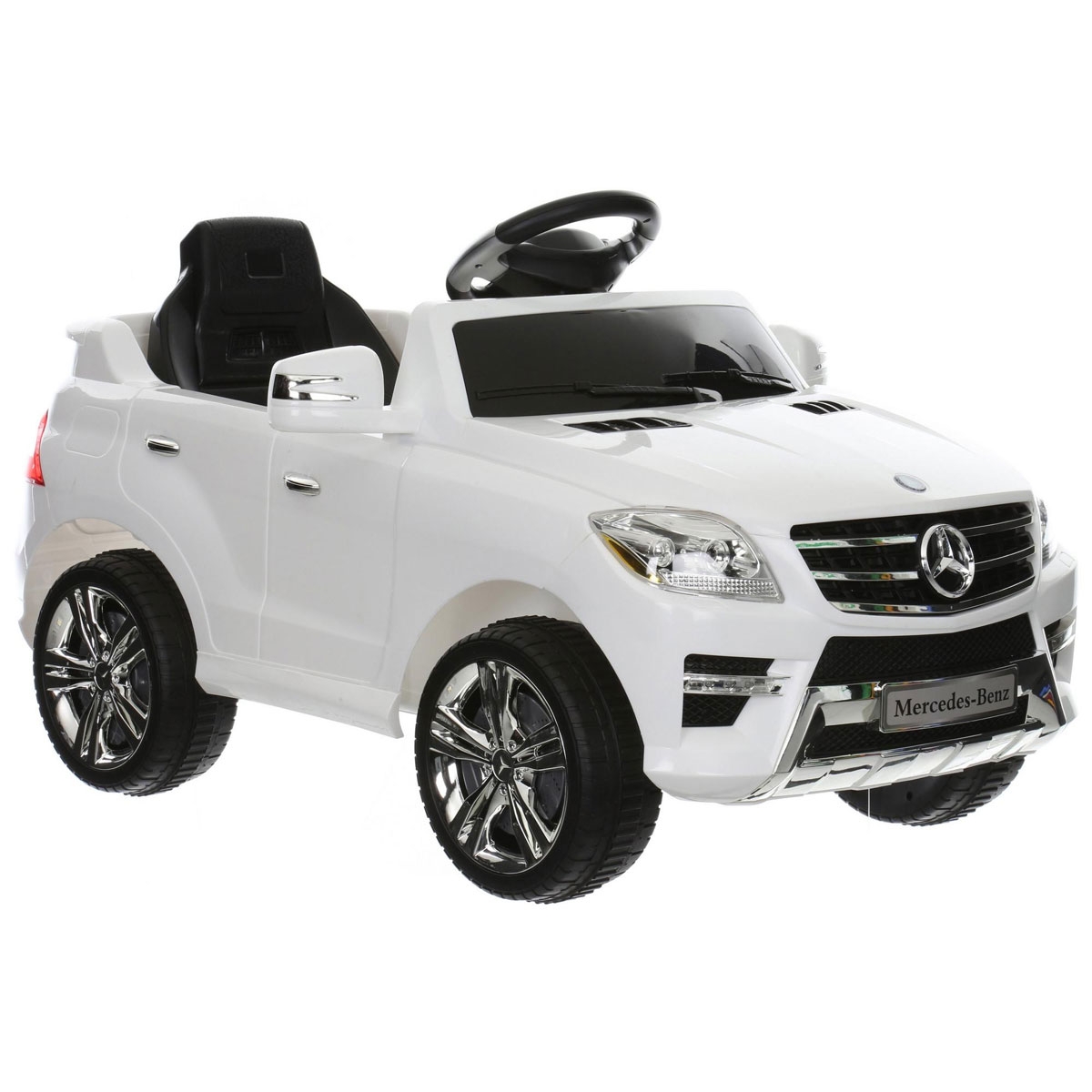 This Mercedes is a 6V car with plenty of features for its reasonable price. It has a push-button start (complete with engine start-up sound), and buttons on the steering wheel for the horn and turning sounds.

It has one seat, non-opening doors and a music input: the cable to connect to your phone or any other device with a headphone output. Attaching a player disables the car’s own sounds. A switch on the dashboard lets you turn the headlights on and off.

As for safety features, there’s a seat belt, plus a remote control for the parent which works up to 20m away. The car has one speed for forward and reverse.

It’s not very powerful: it will cope with a freshly mown lawn, but it’s best on smooth, flat surfaces.

The battery lasts for about an hour and takes 3-4 hours to recharge. 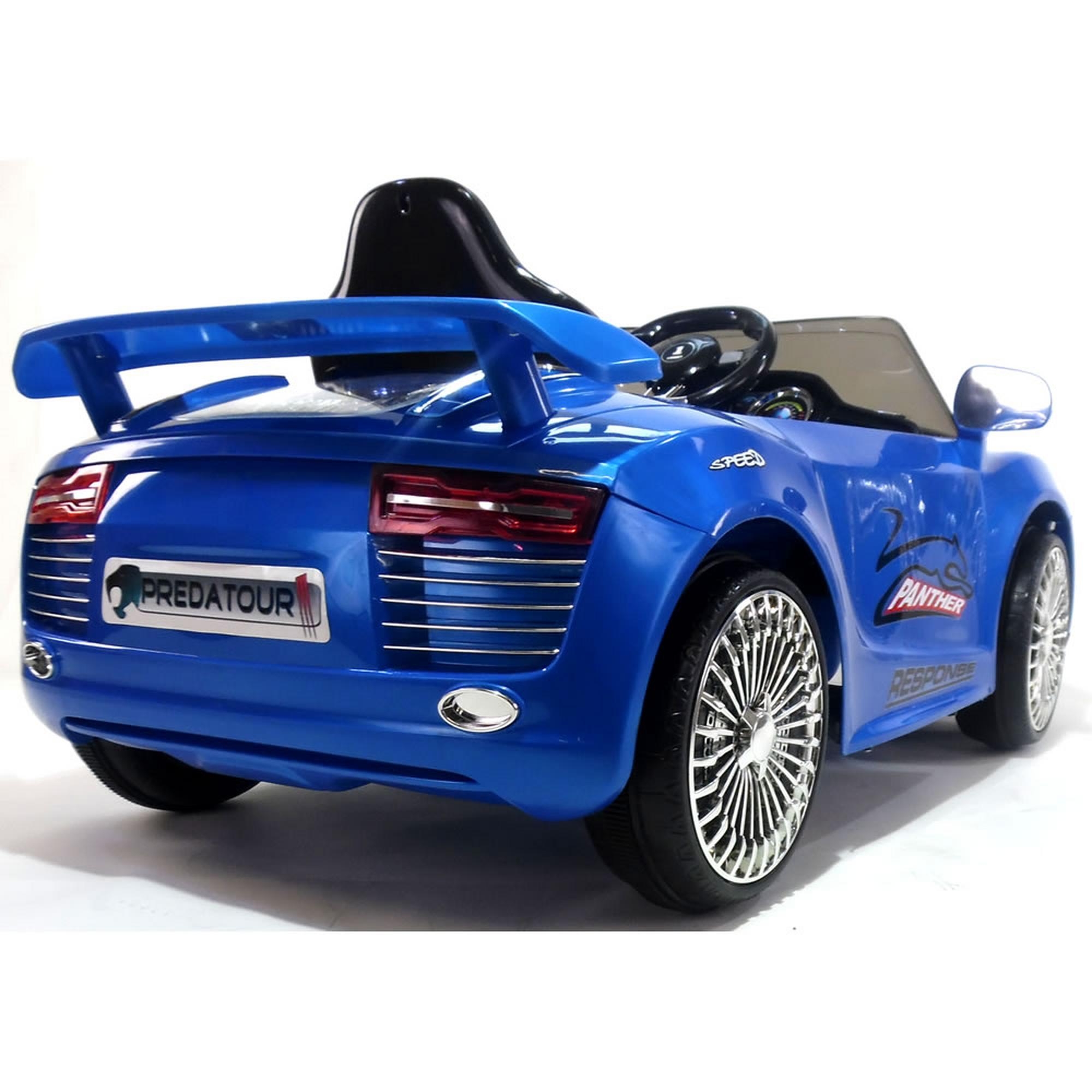 Just like the cars in GTA V, this looks like a real model, but isn’t licenced by Audi. Still, any kid is going to love unwrapping it and zipping around in their new sporty ride.

It’s a 12V car with two motors, so has more power than the cheaper 6V cars. Plus, it comes with a remote control: the 10m range may sound small, but if you need to use it, you’ll probably want to be that close anyway.

The lights work, sounds play when you push the starter button and the steering wheel buttons honk the horn and play music. There’s also an MP3 player input.

As with most cars, there’s one seat, but this one has a seat belt for safety. It has two speeds, plus reverse.

It’ll drive for an hour and takes 3-4 hours to charge up again. 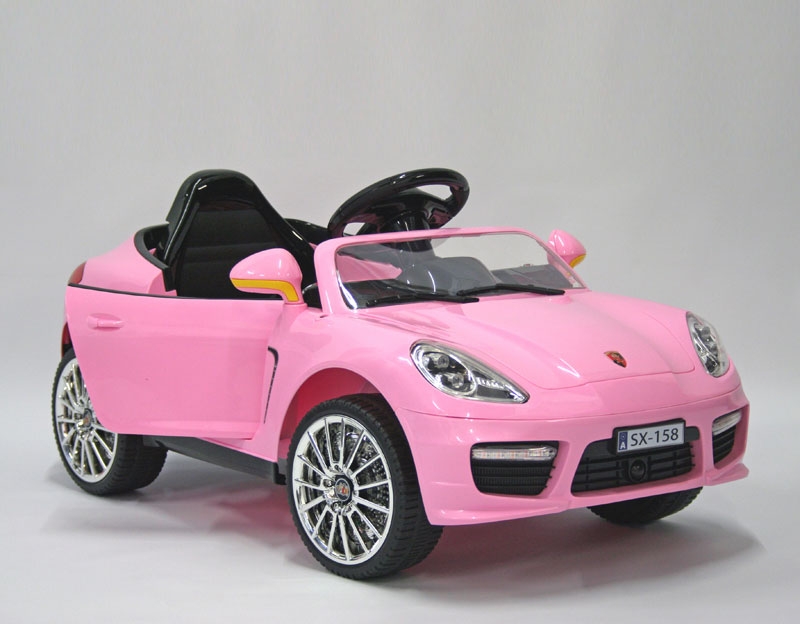 If you’re after a 12V car but are also on a budget, then this Porsche-like model should appeal. It’s also available in red or white, and has a surprising number of features.

The doors open, the lights work, it has two speeds and goes up to 5mph. There’s a start button, a battery level indicator and even a useful fold-out handle and wheels so you can pull it along rather than carrying it once the battery runs out.

For safety you get a seat belt and a Bluetooth remote control that lets you steer and control forward and reverse gears.

As well as the common headphone input, this model also has USB and SD card inputs, so you don’t need to hand over your phone or iPod for in-car music.

Power comes from a 7Ah battery and a pair of 28W motors. And you even get personalised drive number plates. 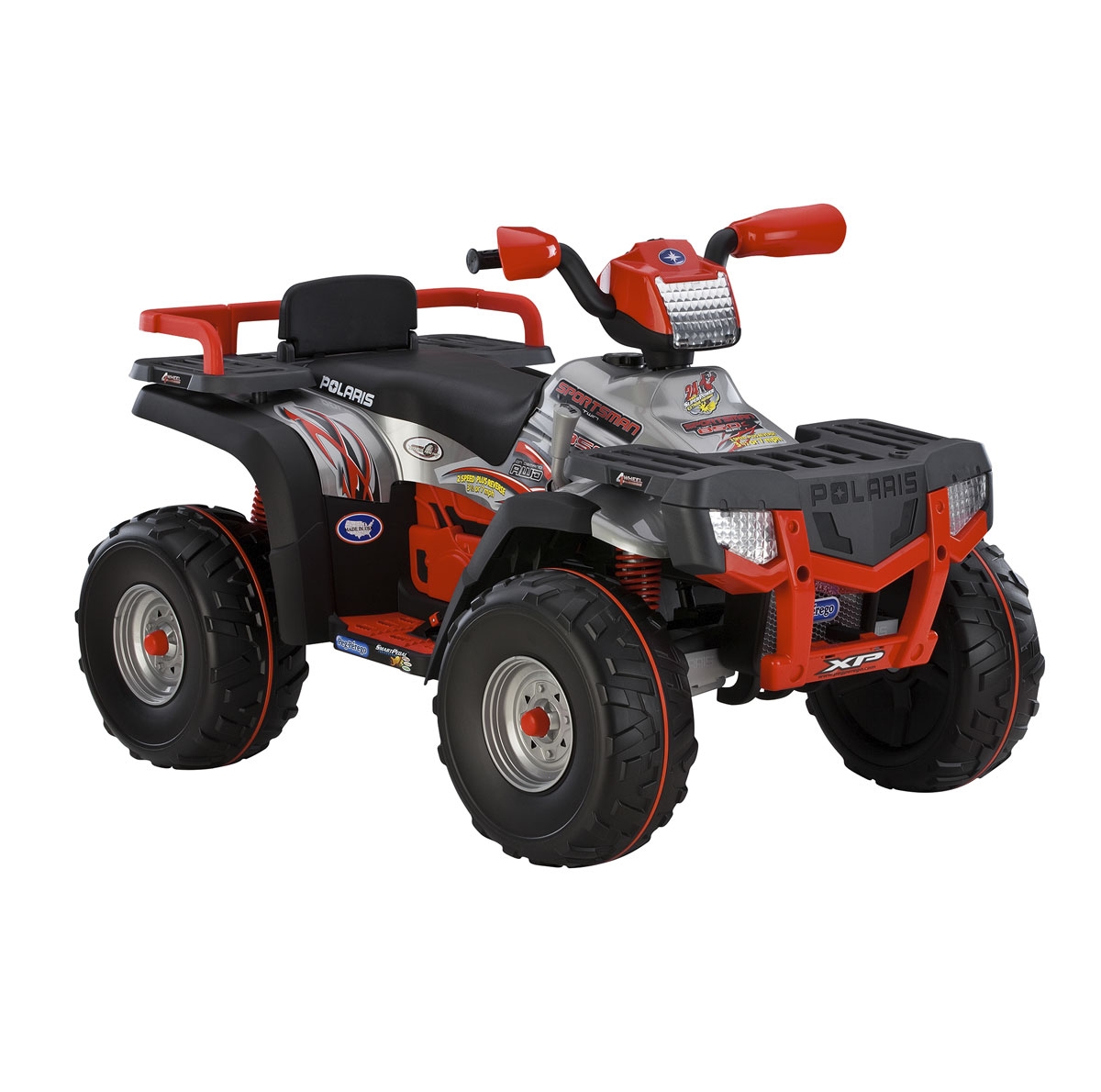 Electric cars that will seat two kids cost a lot more than one-seaters, mainly because they have to be larger and more powerful.

This Polaris Sportsman 850 is a scale replica of the actual quad bike, and has two 340W motors driven by a 24V battery.

It’ll handle a bit of rough terrain and – Peg Perego claims – slopes up to 17 percent. That’s probably stretching the truth a bit, but it does offer high (7mph) and low (3.5mph) speeds, and it’s possible to lock out the accelerator to start with to limit the quad’s speed.

The bad news is that, despite the price, you get only a six-month warranty. 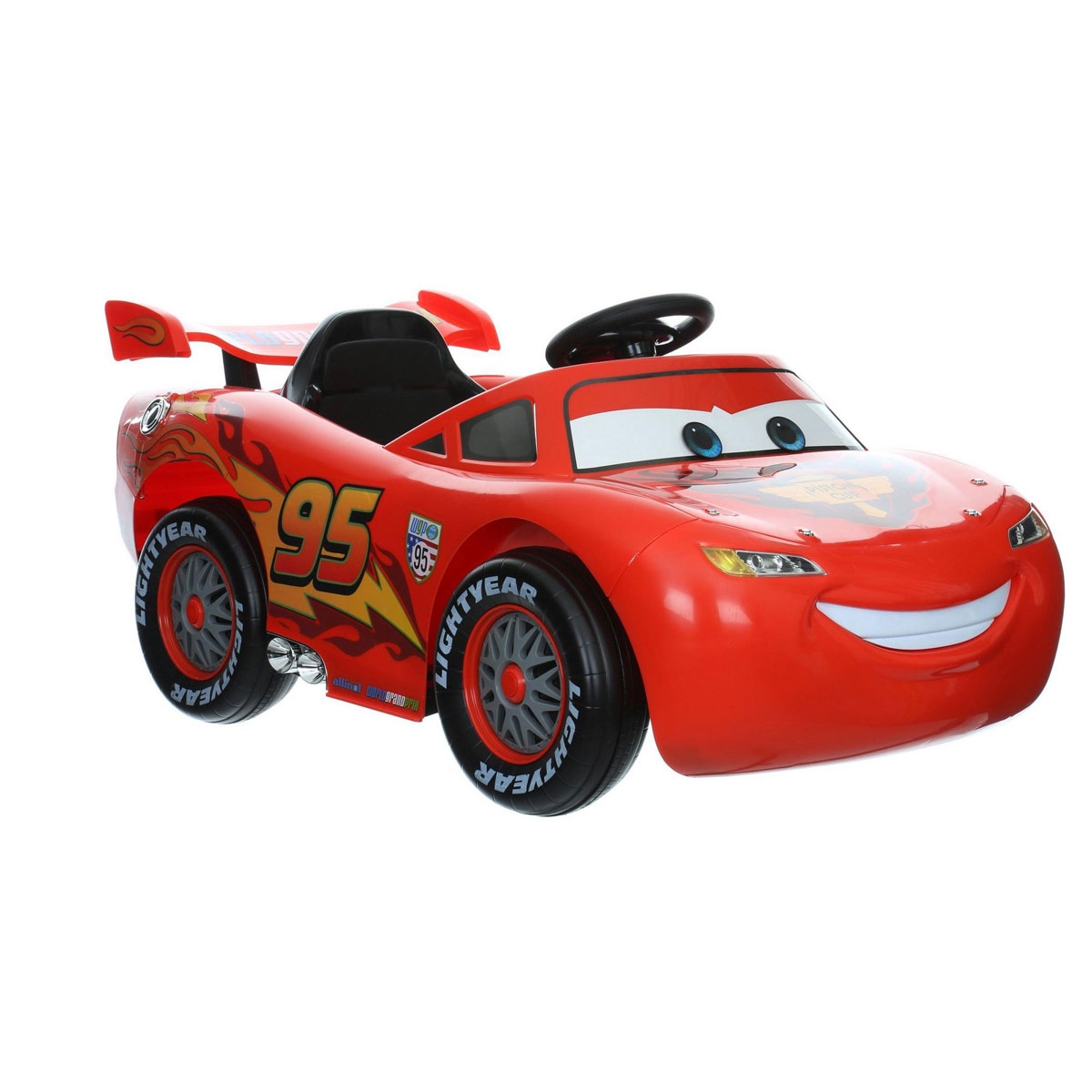 This is a basic car with few features, probably only one to get when it’s on special offer.

However, despite the lack of lights, sounds and a remote control, it could be a good option for younger kids who are big fans of the films.

It’s a 6V car so is slow and can’t really cope with hills. It has an accelerator pedal and both forward and reverse.

The highlight is battery life: it will run for around an hour and a half on a full charge.