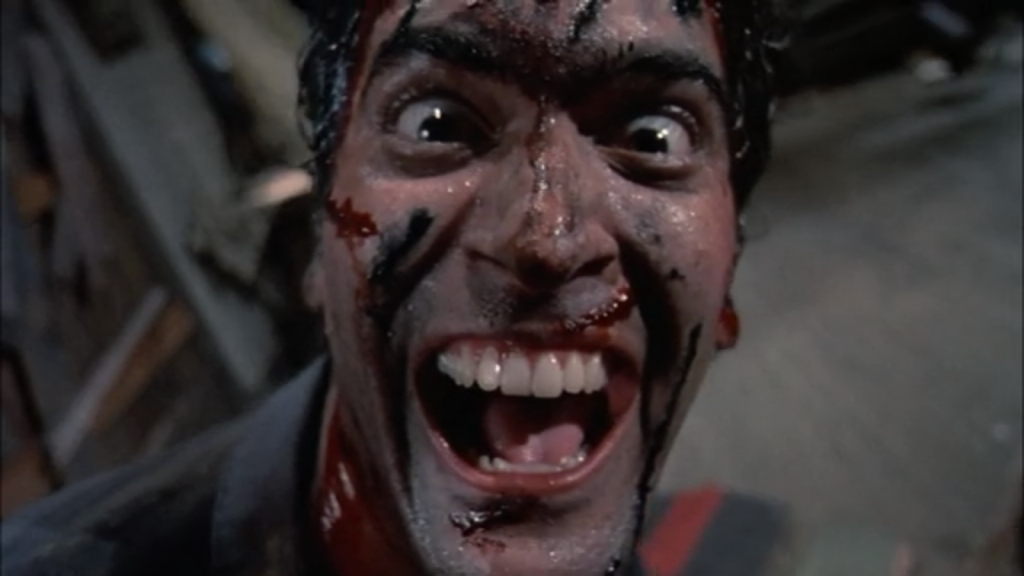 Horror can be much maligned, with plenty of people out there happy to claim that they ‘just don’t like’ horror films. In a way that’s understandable – it does seem a bit mad to go out of your way to scare or disgust yourself – but it means missing out on some of the best movies of all time, let alone the best horror movies.

That’s because brilliant horror is about more than just scaring you silly. Our favourite frightfests weave their scares together with tragedy and comedy, and boast stunning cinematography and moving music. Sure, there might be the occasional splatter (or bucket) of blood, but don’t let that put you off these movie masterpieces. Oh, and a couple of films like Alien and The Fly might have made this list, but since they’re on our list of the best sci-fi films, we decided to mix things up – but you can consider them honourary mentions.

Let’s be honest, it would be difficult to round up the best horror movies ever without mentioning the film synonymous with the scariest time of the year. John Carpenter’s classic heralded in the golden age of the ‘80s slasher movie and spawned countless sequels, but no-one ever bettered the original.

Escaped mental patient (and, y’know, murdered) Michael Myers is an all-time movie monster great. That’s mostly thanks to the combo of his expressionless mask (based on the likeness of none other than William Shatner) and his stubborn refusal to ever give up – even six bullets only really seemed to slow him down.

There’s a lot more to Halloween than just Myers though. For one, there’s Jamie Lee Curtis’s iconic turn as the film’s scream queen, which she went to reprise a few more times. Even more memorable is director John Carpenter’s moody keyboard score, which he wrote and performed himself over just three days. 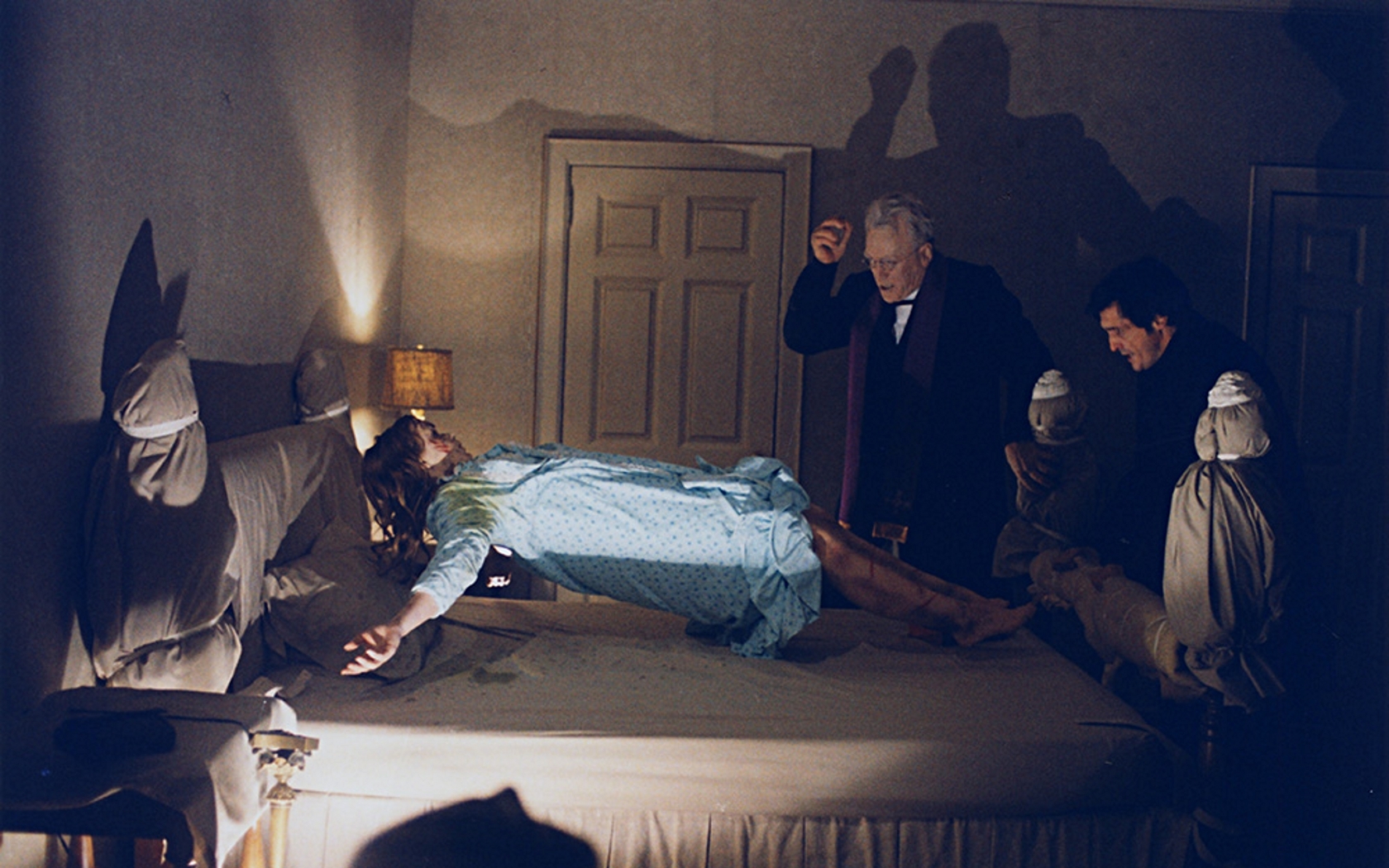 Few horror films have earned a reputation on a par with The Exorcist, which for years went down as the most horrifying movie ever made. Whether it quite deserves that title is up for debate – modern gore fans might even find it slightly tame – it’s hard to argue that it’s a powerful film in its own right.

Possessed children have been done to death (literally), but The Exorcist was the first to make the process quite so… graphic. Across the course of the film, the young Regan spews bile (both literal and verbal), attacks the priests trying to help, and even mutilates herself, but William Friedkin’s film never forgets that this is a young girl in need of help – and sympathy.

In amongst the gore and horror there’s room for some thoughtful meditation on religion and faith, and moody cinematography that makes the most of the cramped quarters. This is another horror movie with a stellar soundtrack too – for better or worse, Tubular Bells will never be associated with anything else.

If Jaws proves anything, it’s that you don’t need homicidal maniacs or murderous monsters to create real fear: you just need a shark. Hell, you don’t even really need that – a bit of water, a rubber fin, and some mounting ‘duh-duh… duh-duh’ music will do the trick too.

The film that scared a generation out of ever going swimming again is still just as terrifying today as it was when it came out – and feel free to ignore anyone who complains that the shark doesn’t look real. After all, Spielberg’s masterpiece is the pinnacle of slow-burn terror, keeping the shark itself off screen as often as it can bear, relying on the fear of where the beast might be rather than where it is.

Somehow Jaws turns a sunlit New England beach into the most terrifying place on earth, reminding us that there isn’t much filmmakers can come up with that’s scarier than what nature itself has to offer. Now please excuse us while we try to get as far away from the ocean as we possibly can. 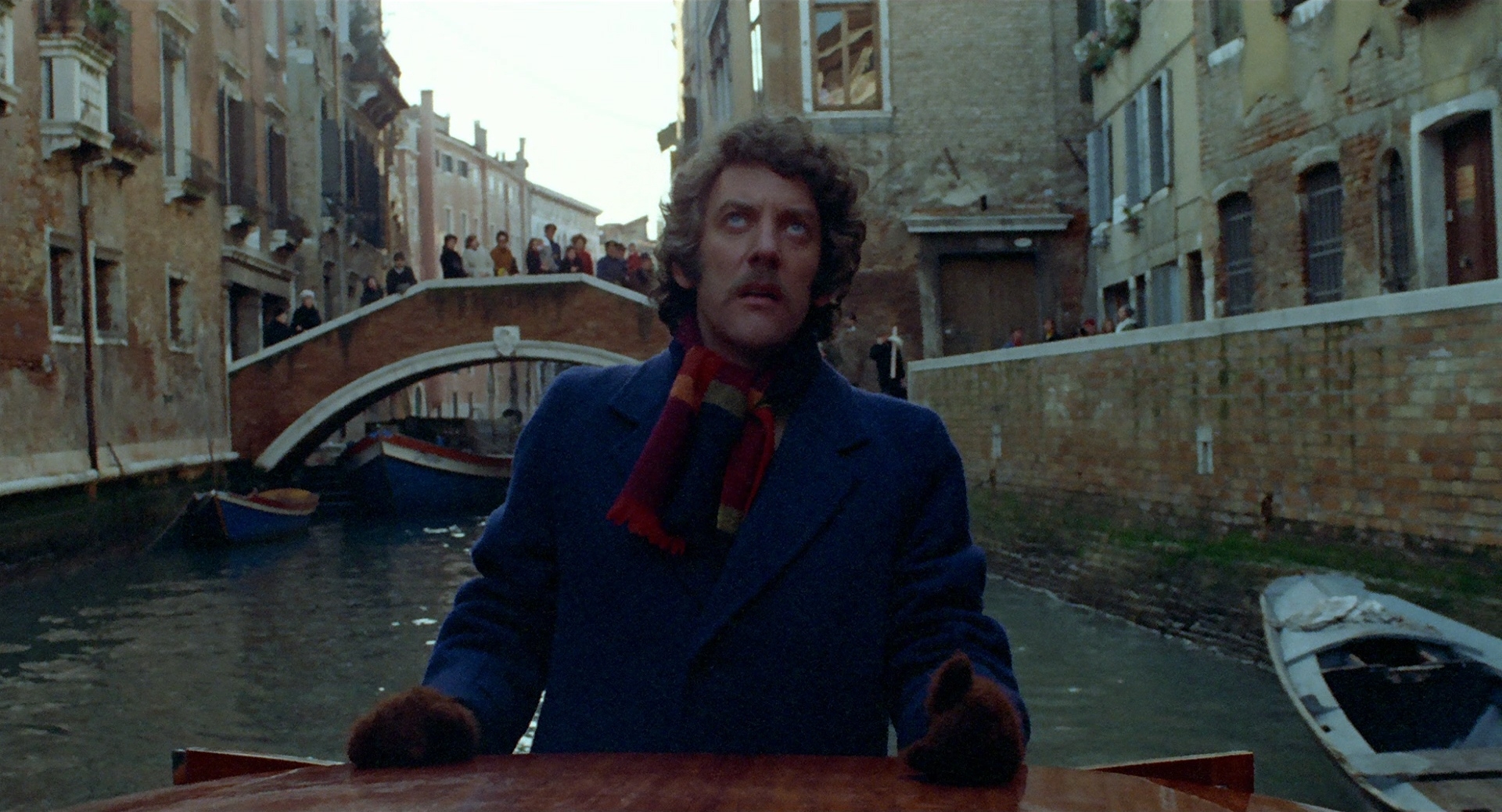 That’s never been more true than in Don’t Look Now, Nicolas Roeg’s utterly unique exploration of a young couple mourning the death of their child in a wintry Venice. There are few outright scares (though the final shots are rightly considered some of cinema’s scariest), but there’s a constant sense of gnawing unease, the difficult-to-pin-down feeling that things just aren’t right.

Donald Sutherland’s central performance goes a long way to carrying the film throughout, though Venice itself is as much one of the stars as he is. Rather than sunny and idyllic, Don’t Look Now captures the city in the cold, an isolating place surrounded by history, stuck in its own past.

If you’ve never seen Don’t Look Now, you owe it to yourself to make that right. Just be warned: you’ll never be able to look at a red anorak in the same way again. 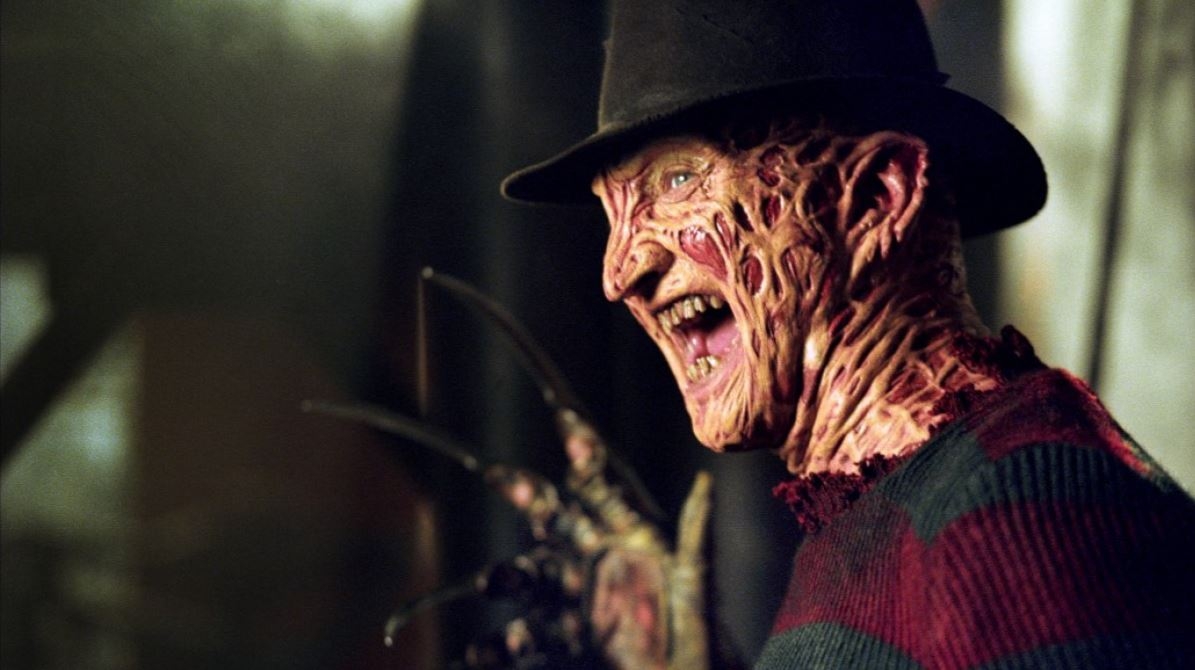 Wes Craven somehow managed to reinvent the horror genre three times across his career, and A Nightmare on Elm Street was his second shakeup (The Last House on the Left and Scream were the other two, in case you’re wondering). Arguably the definitive horror movie of the ‘80s, it set the standard for slashers and promised to destroy one of the last safe places we had left: our own minds.

That’s because the inimitable Freddy Krueger (not that plenty of people haven’t tried to imitate him) attacks you in your dreams, giving the film an excuse to break the rules of the genre (not to mention the laws of physics) in setting up more and more elaborate kills.

Reality itself begins to break down, leaving the film’s cast of victims – including a young Johnny Depp – to wonder when they’re awake and when they’re dreaming, when they’re safe and when Freddy might be just around the corner. Sure, the sequels all suffered from diminishing returns, but the first nightmare can’t be beaten. 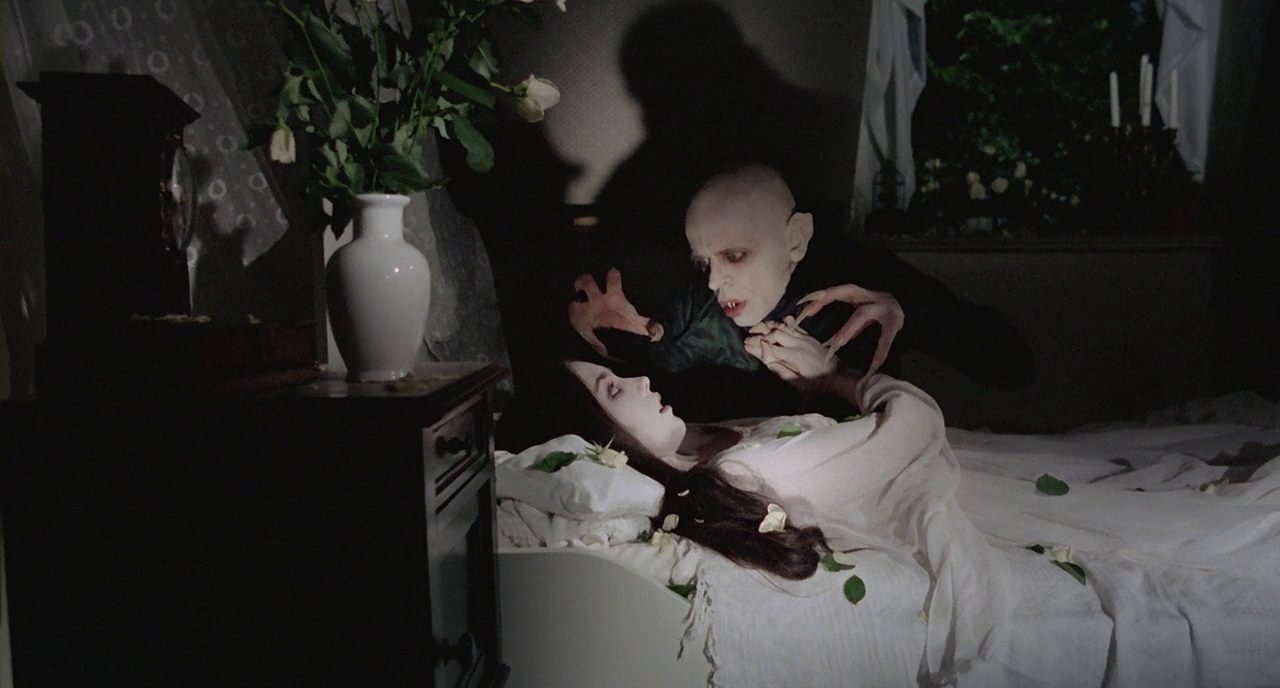 Look, we weren’t about to do a ‘best horror’ list that didn’t have Dracula in it, were we? The Transylvanian tyrant has had countless film outings, from the good (Bela Lugosi’s 1931 classic) to the bad (the mis-judged comedy Dracula: Dead and Loving It) to the downright weird (Bram Stoker’s Dracula, with Gary Oldman as the astonishingly coiffed vampire).

Still, the one we keep coming back to is Werner Herzog’s Nosferatu the Vampyre, itself a remake of 1922’s silent classic Nosferatu, bringing in elements of the Dracula story that had since passed into the public domain.

Herzog’s film highlights the fundamental tragedy of Dracula, portraying him as much as victim as monster, thanks in no small part to an unbeatable performance from Klaus Kinski. This is dark, gothic cinema at its finest, and Herzog’s camera plays mesmerisingly with light and shadows. 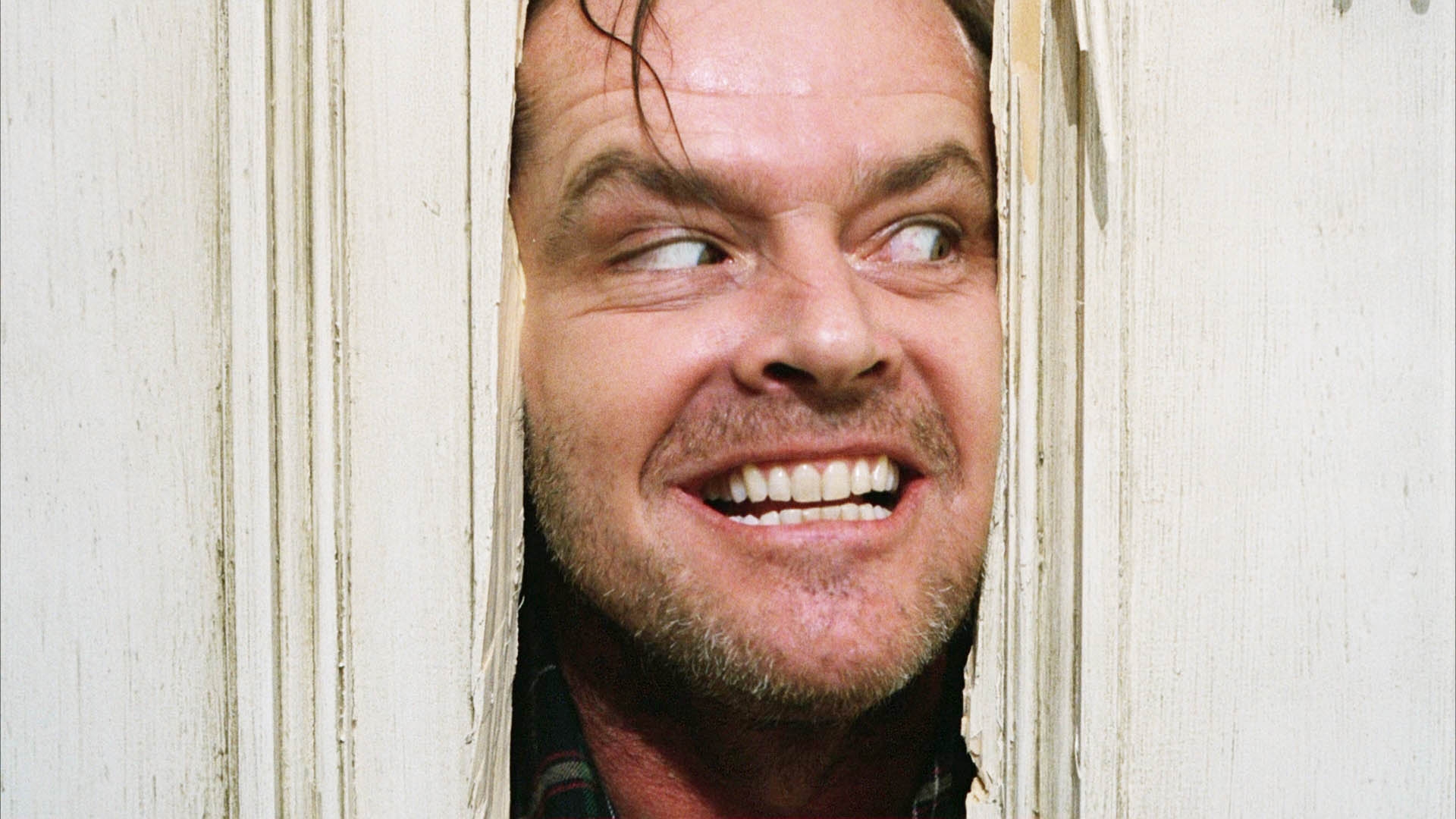 Just as any self-respecting horror list needs to feature Dracula at some point, it should also probably include something written by Stephen King. He’s written more books than most of us will ever read, and had a good number of them adapted into films too, including some of cinema’s finest.

The great irony of The Shining is that in addition to being one of the best adaptations of King’s work yet, it’s also one of the least faithful – something King himself famously slammed the film for. And while director Stanley Kubrick did take some extensive liberties with the source material, it’s all in the name of shaping an unforgettable horror masterpiece.

Jack Nicholson’s unhinged performance is an obvious highlight (there’s a reason that ‘Heeere’s Johnny’ moment has become so iconic), but it’s Kubrick’s obsessively detailed production design that’s earned The Shining its cult status. In his hands, the Overlook Hotel becomes the sight of unspeakable horrors and unfathomable mysteries.

The Shining is so loaded with mysteries and secrets that it even inspired its own documentary, Room 237, devoted to unpacking the conspiracies and interpretations surrounding the film. 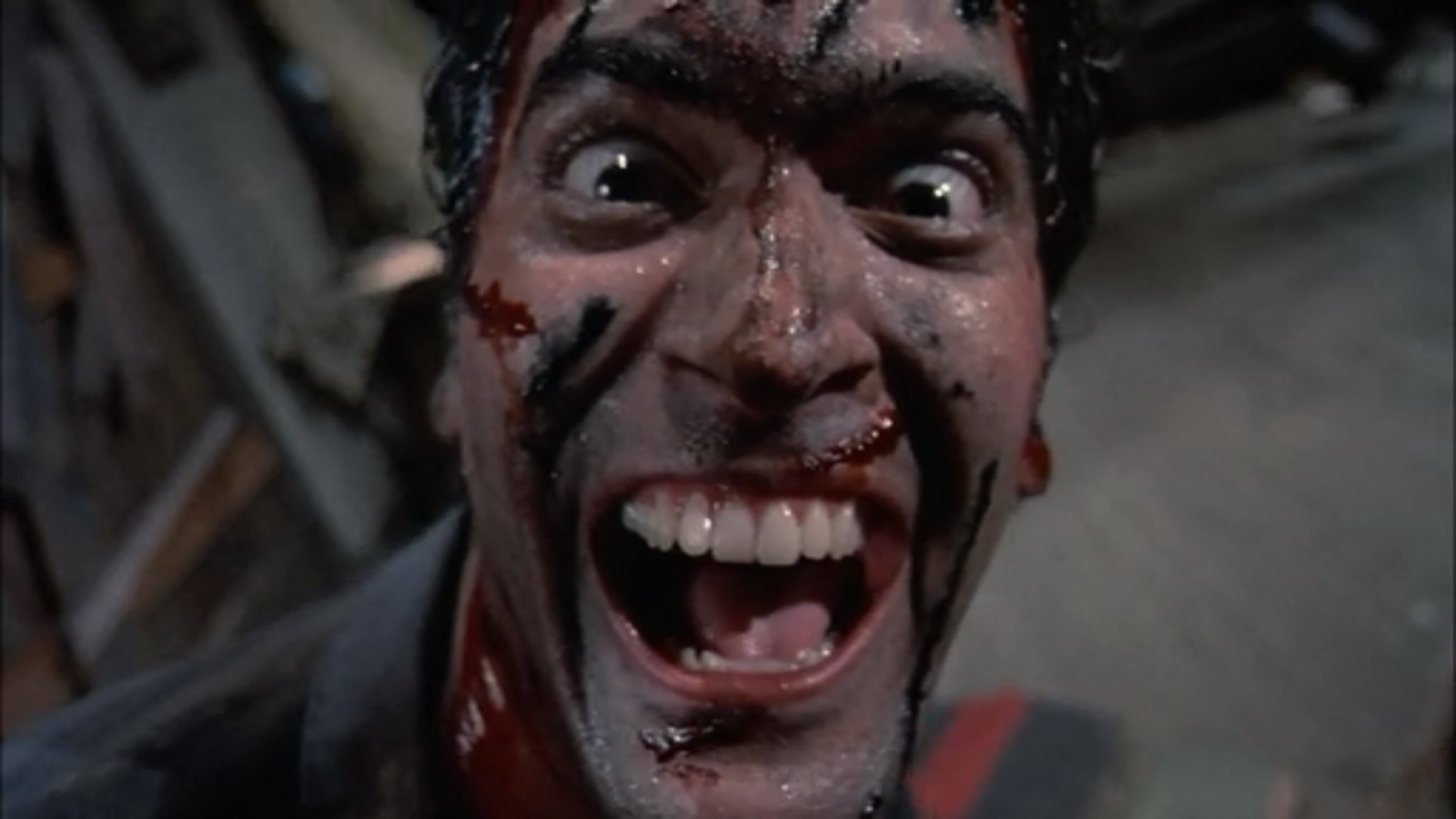 Horror doesn’t always need to take itself too seriously, which is a lesson that Sam Raimi’s Evil Dead II took entirely to heart. The follow-up to his ultra-low-budget original takes that film’s gore-driven horror and cuts through it with a rich vein of slapstick comedy.

Strong-chinned star Bruce Campbell lies at the heart of the film’s funny streak, striking a bravura tone of unjustified confidence and utter idiocy. Whether he’s fighting off disgusting demons or grappling with his own demonically possessed hand, Campbell is utterly committed to the role, and his goofy grin has since carried him through a career of playing similarly lovable buffoons.

Of course, just because it’s funny doesn’t mean that Evil Dead II forgets that it’s a horror film. The increased budget gave Raimi the chance to make the monstrous deadites as skin-crawlingly unpleasant as possible, while the cast and set are doused in gallons of claret by the time the credits roll.

This is horror at its most uproariously fun, and the best the Evil Dead franchise ever got. 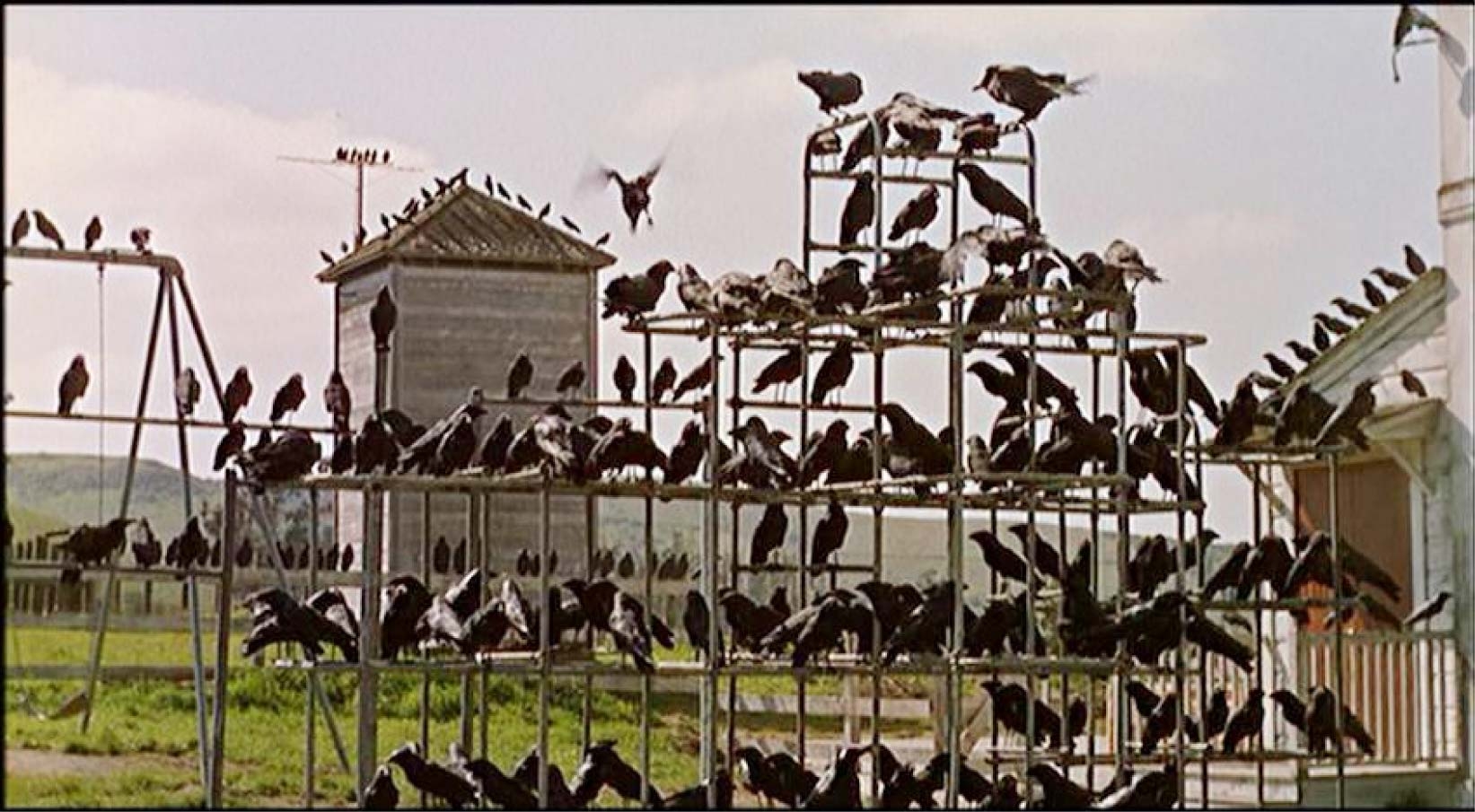 You could probably fill this whole list with ten amazing Hitchcock horrors, but we’ve got to give our vote to The Birds – if only for the fact that he somehow turned a flock of seagulls into the most terrifying thing we’ve ever seen.

The series of unexplained avian attacks on the town of Bodega Bay, California slowly ramps up over the course of the film, gradually progressing from the odd aggressive caw up to a full-on assault. Hitchcock shows off plenty of his directorial flair along the way – the slow tracking shot to reveal a climbing frame covered in crows must be one of Hitch’s best.

Throw in the unforgettable Tippi Hedren and a great turn from Rod Taylor and you have a horror great that’s aged spectacularly well. Though anyone with pet budgies might want to steer clear. 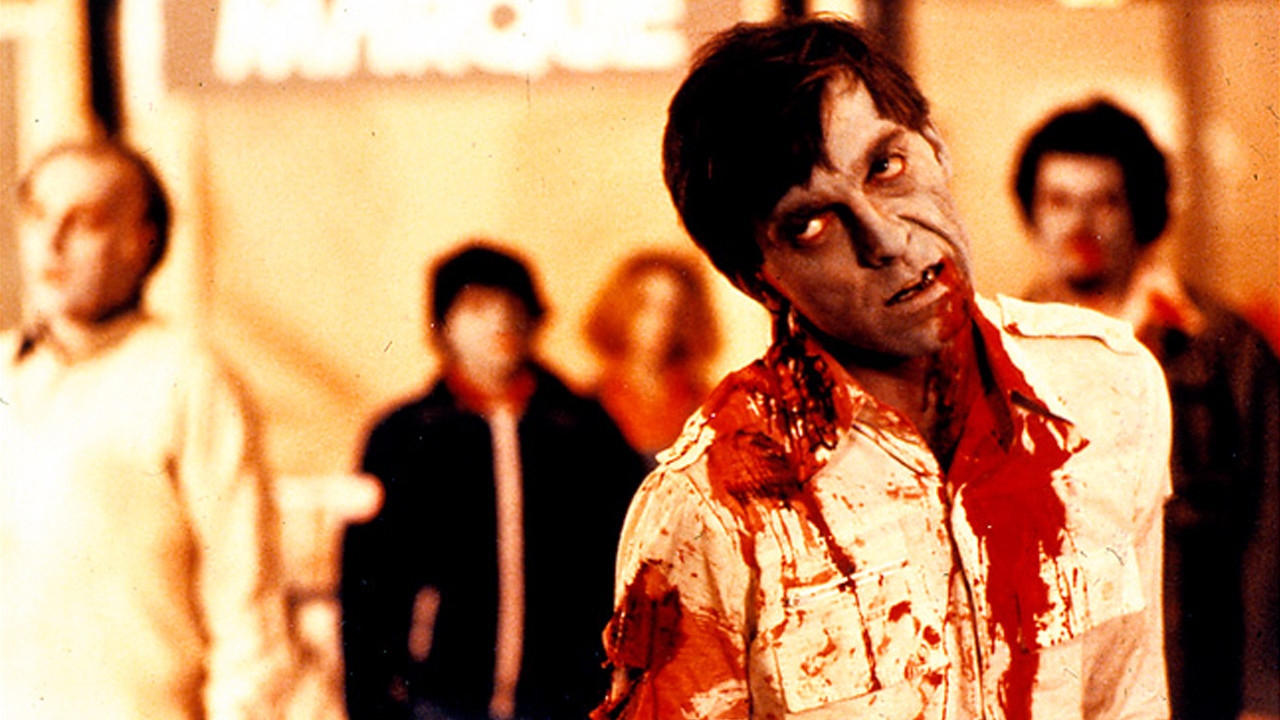 ‘Man was the monster all along’ is one of horror’s oldest and hoariest clichés, but every now and then a film comes along that makes it feel fresh. George Romero’s Dawn of the Dead is one of those films.

After essentially inventing the modern concept of the zombie in Night of the Living Dead, Romero came back ten years later to perfect it. As a small group of survivors holes up in an abandoned shopping centre they take the opportunity to live out all their wildest consumerist fantasies while also evading the odd zombie attack.

Of course, the message is that we were the real (consumerist) zombies all along, mindlessly following society’s instructions to buy things we don’t need and spend money we don’t have. Which isn’t to say there aren’t plenty of the more traditional brain-eating zombies too, if you’re into that sort of thing.

Zack Snyder’s 2004 remake isn’t half-bad either, but do yourself a favour and seek out Romero’s classic first. 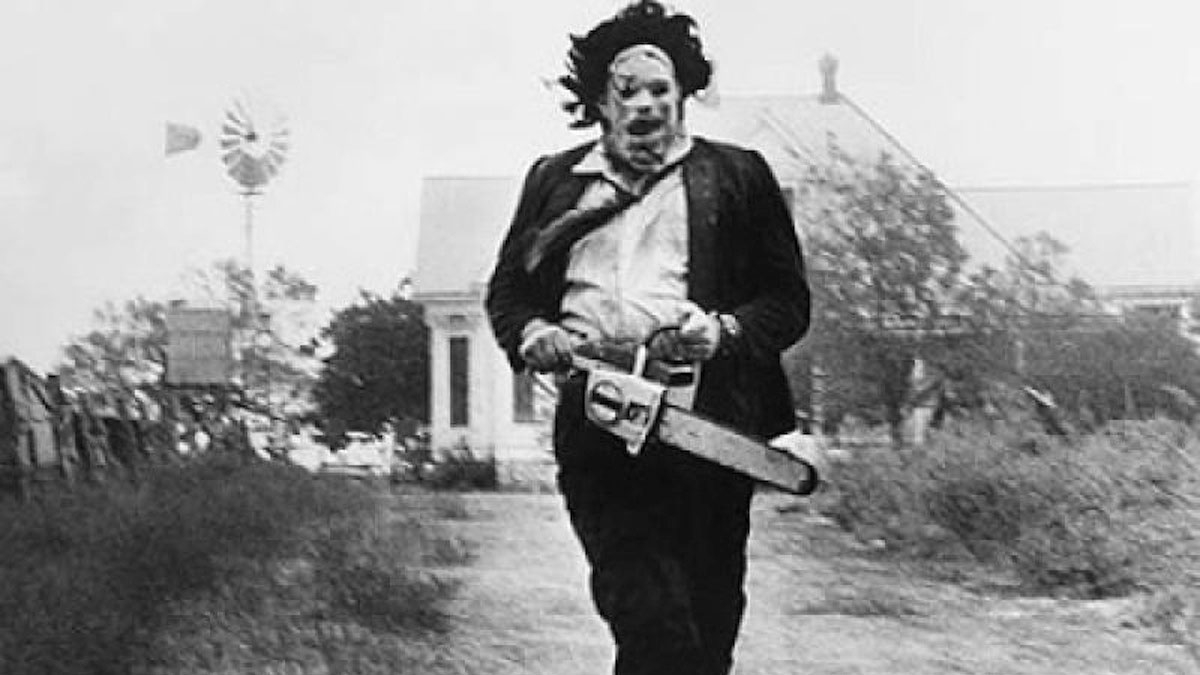 It’s been 43 years since the Texas Chainsaw Massacre debuted, and horror films haven’t been the same since. The 1974 classic – which was notoriously banned from several countries due to violence – not only laid the foundation for thousands of iconic horror films, but also inspired a multitude of franchises, comic books, video games and other works.

Directed by Tobe Hooper, the original Texas Chainsaw Massacre is lightly based on the true story of American psychopath Ed Gein, who committed a series of gruesome murders between 1954 and 1957.

Though in actuality Gein took his victims by pistol rather than a chainsaw, Hooper’s film features unsettling elements of the true story such as Gein’s gutting and skinning of his female victims’ bodies and wearing the remnants as a grueling disguise.

With several remakes (eight to be exact), Texas Chainsaw Massacre continues to stun and disturb audiences like no other film.