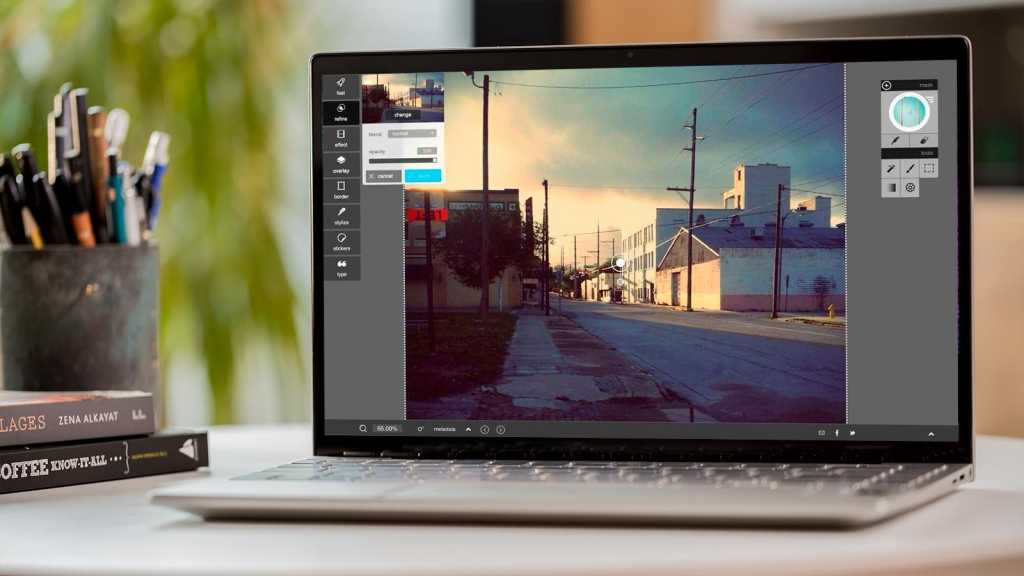 Whether you mostly take photos on your phone or prefer to use a compact or DSLR camera, you’ll want to edit some of your best pictures to enhance them, crop them and otherwise make them even better.

Phones have certainly made the process a lot more painless and their built-in photo apps have reasonably good editing facilities. But when you need to go further and do more than applying filters, adjusting contrast and cropping, you’ll almost certainly want to switch to your laptop or PC and use a dedicated photo editing app.

The obvious one is Adobe Photoshop or perhaps Lightroom, but unless you’re prepared to take out a subscription for the full version or buy Photoshop Elements for a still-considerable one-time fee, you’ll be searching for alternatives that offer a similar range of tools but without the cost.

And as with most software, you can get a perfectly good photo editor for free. Many of these apps will fix up your pictures with just a couple of clicks or taps, but if you want Photoshop-style control so you’re not adjusting the entire image, there are still options including stalwarts such as GIMP (sounds dodgy, but isn’t) and Paint.NET (not the one built into Windows).

You don’t have to install anything at all: there are lots of online apps which you can use in a web browser.

We’re focusing mainly on Windows apps here, but there are lots of great photo editing apps for iPhone and Android. We’ve already mentioned the built-in apps (Photos on iPhone, for example) but you get even more control from Camera+, if you don’t mind paying a few dollars / pounds for an app. Google Photos is available for iPhones as well as Android and offers great editing capabilites, but the Google-owned Snapseed is even more powerful and is, again, available on both platforms.

Getting back to Windows, you’ll find our recommendations for free photo editors as well as a couple paid options just in case you’re looking for a Photoshop alternative with more advanced features.

If you want to cut and edit video, then we also have a round up of the best free video editing software. 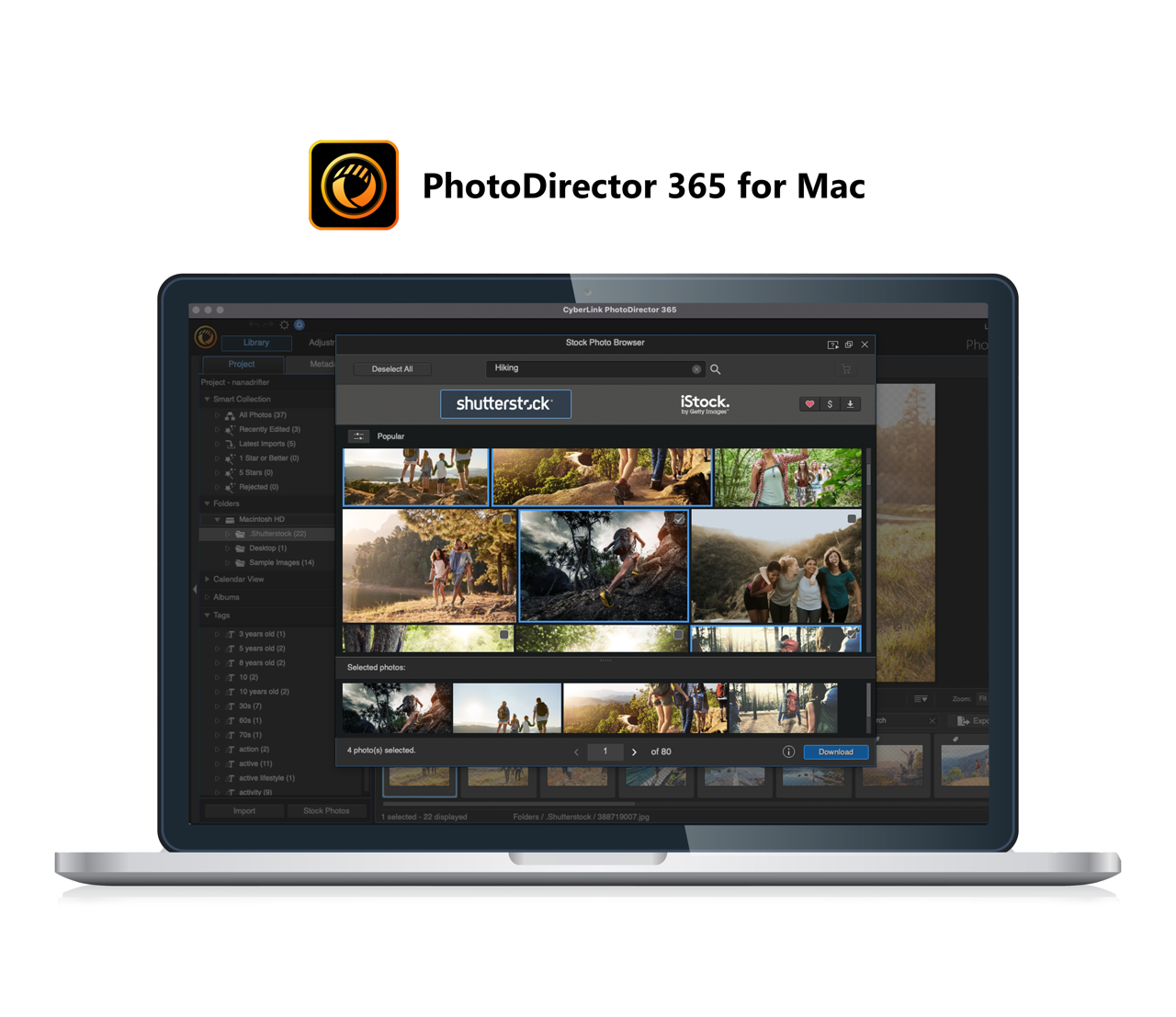 Make expert-level edits to your photos in minutes with with templates for any occasion, new AI features for Bokeh and object removal, mind-bending visual effects and so much more! Now including world-renowned Shutterstock and iStock by Getty Images libraries. 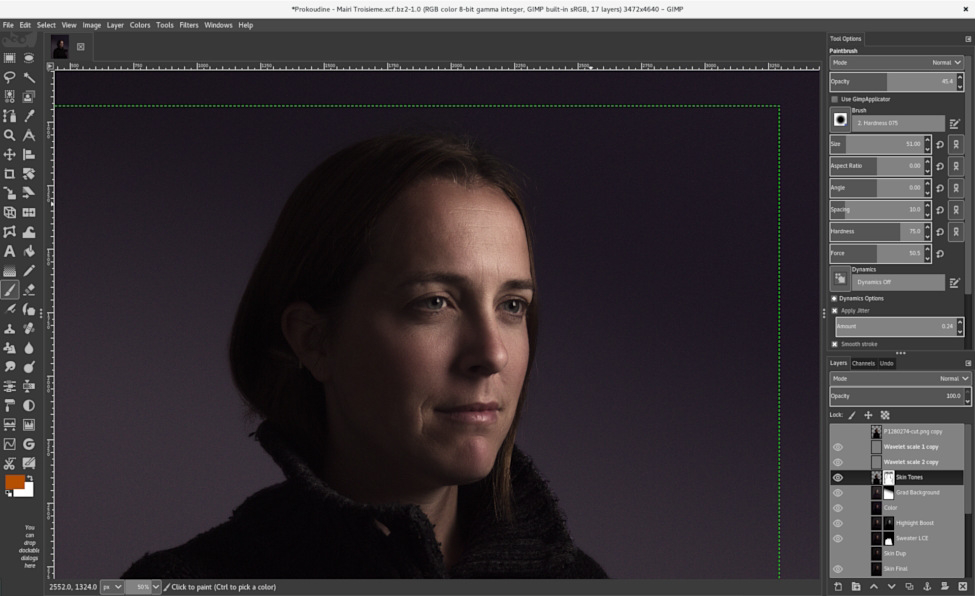 GIMP (which stands for GNU Image Manipulation Program, and nothing remotely dodgy) has basically been around forever, at least in internet terms. You can trace its origins way back to 1995 when it was created as an open source equivalent to Photoshop.

These days you can get it for Windows, macOS and Linux, and it’s entirely free. While it lacks some polish compared to some of the others here, you can’t really fault GIMP for its selection of features, which is about as comprehensive as you can get without laying down some money.

It helps that the layout is pretty close to Photoshop’s, making it immediately familiar to anyone who’s dabbled with Adobe’s editor.

It doesn’t replicate every last feature in Photoshop, and some tools don’t perform to quite the same high standard, but you can’t complain when it’s free. 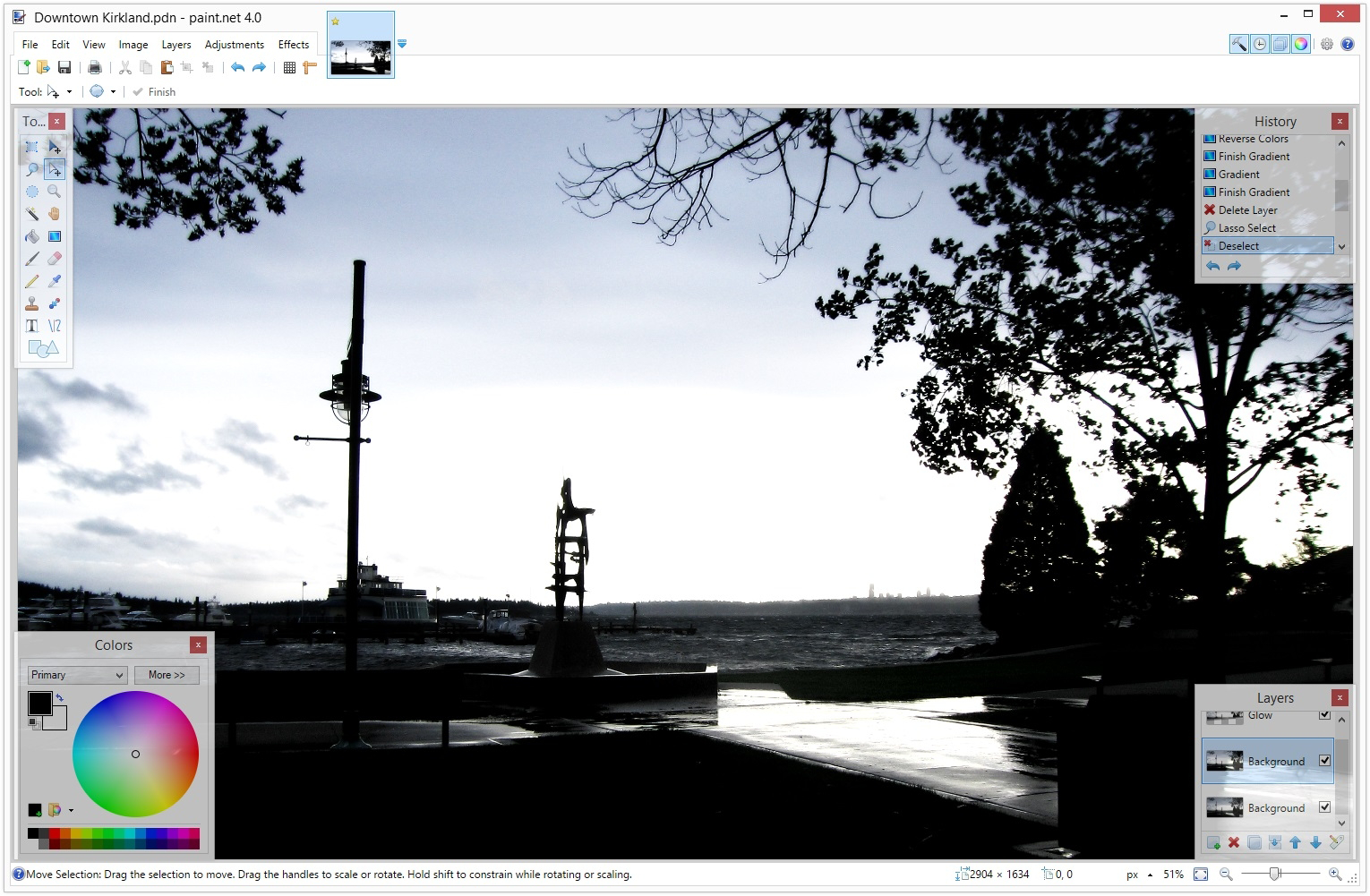 The name might bring to mind MS Paint (which this began as a replacement for), but Paint.NET does an awful lot that Microsoft’s simplistic editor can’t, with support for layers, effects, and a variety of other tools.

Still, it hasn’t entirely lost Paint’s simplicity, which is one of Paint.NET’s greatest strengths. It’s fast and lightweight, making it ideal for quick, simple edits. It’s also great for users who want something with more oomph than Paint, but don’t need all the daunting bells and whistles of Photoshop.

It’s worth noting that Windows 10 and 11 have a new version of Paint which lets you create and play with 3D objects, but it’s not for editing photos. Instead, you can play with the built-in Photos app. 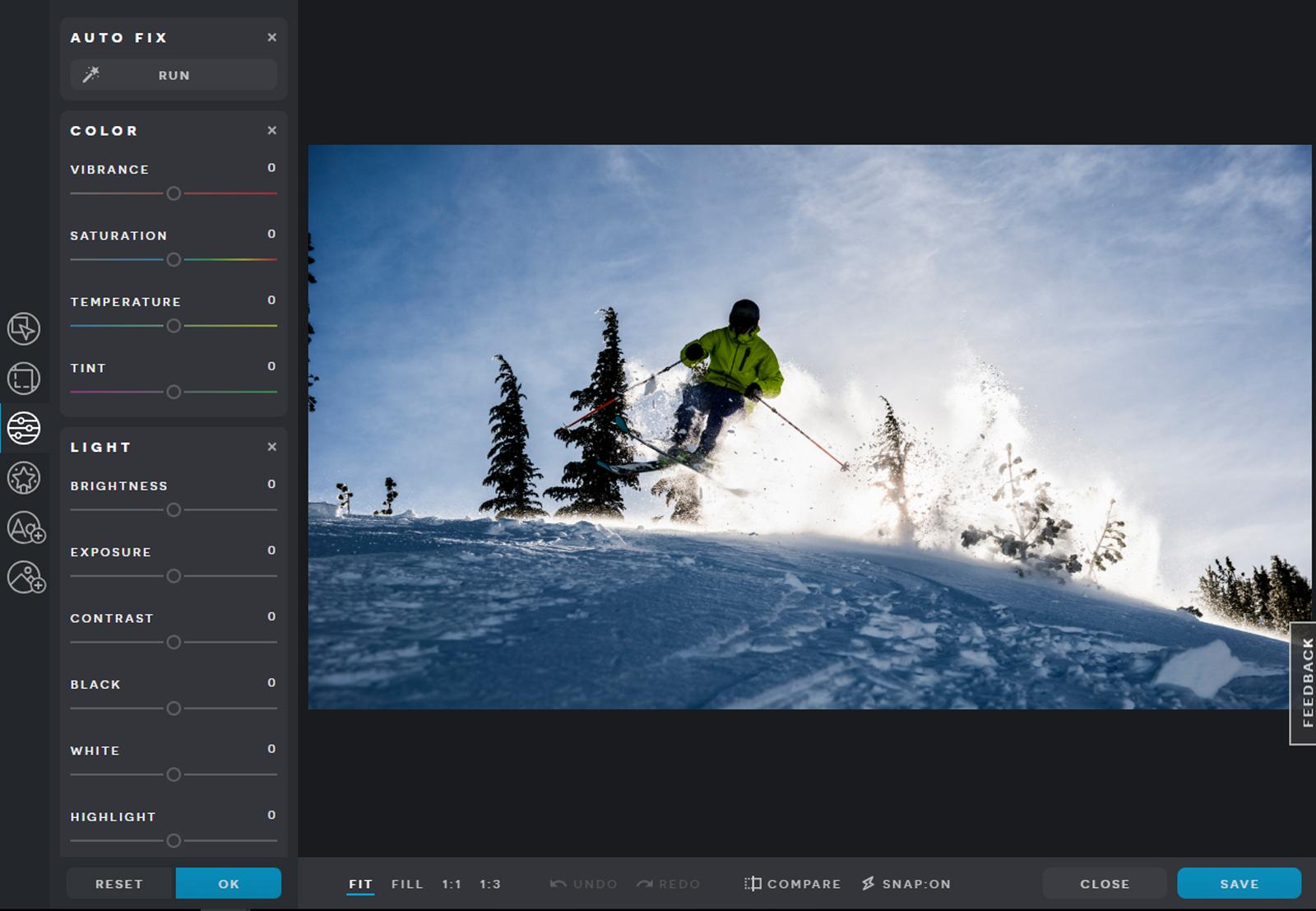 Pixlr has one giant benefit over most of the other apps on this list: it runs entirely in your browser, meaning you can access it on any PC or Mac, with no need to install anything.

There are two versions, Pixlr E, a full-featured photo editor aimed at Pros and Pixlr X which is the ‘quick & easy’ option for everyone else.

Of course you can’t quite get the full power of a photo editor in a browser, but Pixlr packs plenty of features in, and the ‘E’ version is surprisingly comprehensive – especially considering how smoothly it runs.

You can download desktop apps for Windows and Mac, as well as mobile apps for Android and iOS, which can be found respectively on the Google Play Store and the App Store.

There’s a Premium version that offers more tools, including AI Cutout, and supports larger images up to 8196×8196 pixels. 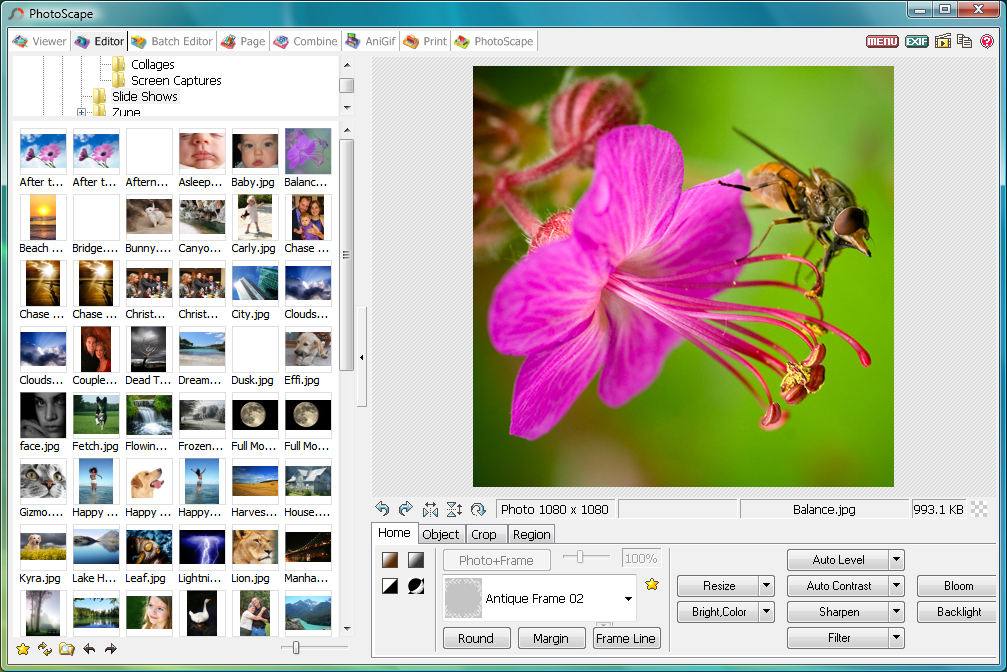 PhotoScape is a solid free photo editor that also offers a little more besides – you can also use it to create animated GIFs, convert RAW images to JPG, create slideshows, and more.

When it comes to the actual editing tools, PhotoScape can’t beat the most fully featured entries on this list, but it does have all the core functionality you’re likely to need.

The default circular tool menu is a bit divisive, but you can opt for a more traditional grid if you prefer, and you have access to the usual array of editing and re-touching tools, including a variety of effects and filters. 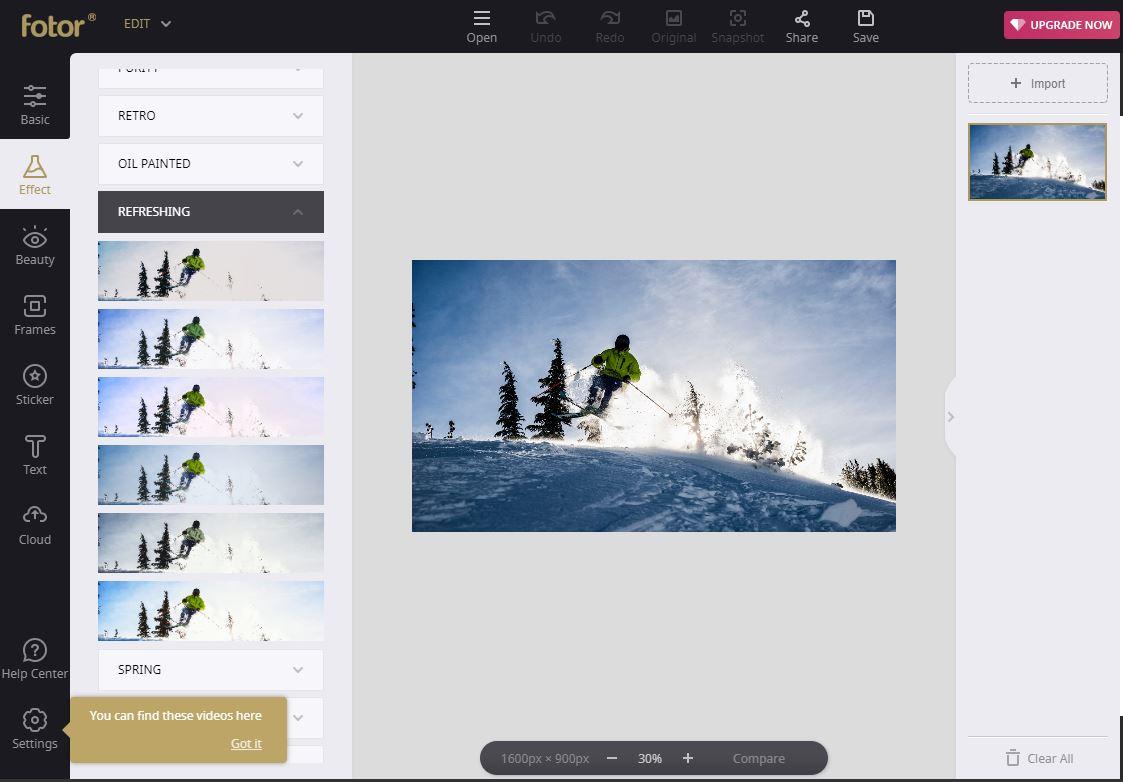 Fotor isn’t trying to be a fully-fledged photo editor, so if you’re looking for a full suite of functionality then you might be better off elsewhere.

What it does offer is a great selection of photo enhancement tools – directly through your browser like Pixlr – letting you quickly apply filters and do some basic re-touching. It also has an HDR option that lets you merge multiple photos with different exposures to create a single image that captures the ideal amount of colour and detail.

You can install Fotor for Windows (or macOS) separately, again for free, if you prefer. The desktop application offers a batch processing tool too, so you can apply the same changes to a huge number of images at once, a feature sadly missing in a lot of equivalent applications.

There’s a paid version too that enables more advanced features on the online version. Subscription costs are $8.99 per month (around £7), or $39.99 per year (around £30). 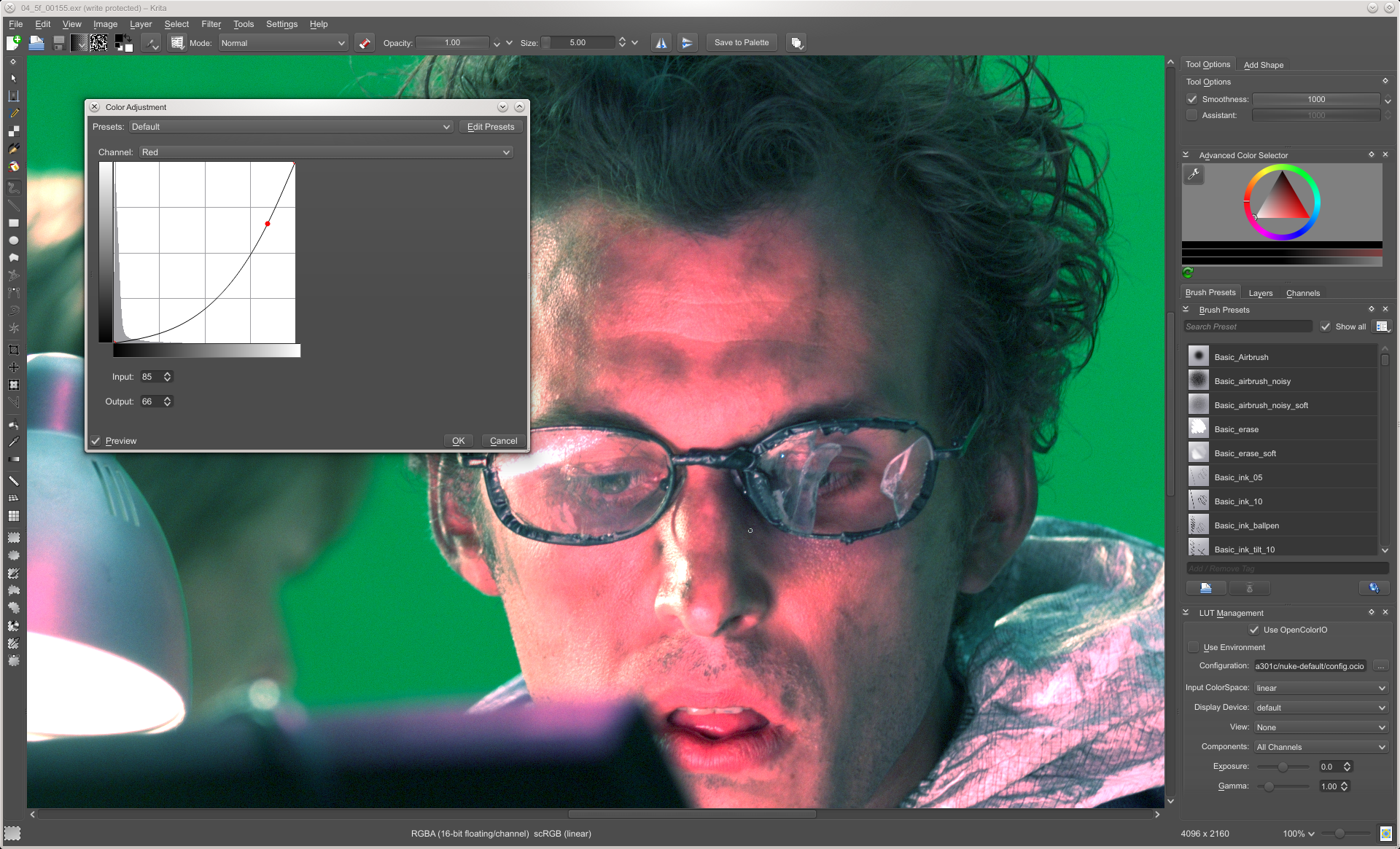 Krita is as notable for its creators as it is for its functionality. Developed by artists for artists, the free cross-platform app is designed to give artists all of the tools they need, with a focus on concept artists, illustrators, matte and texture artists, and the VFX industry.

It’s not strictly a photo editor (though you can certainly use it for basic retouching), and the focus is more on digital painting and creating artwork from scratch.

It has a variety of brush engines (along with a handy brush stabilizer feature), and you can also import brush and texture packs. The recently added support for HDR monitors in Windows is a welcome addition, and it even supports PSDs, so it’s fully compatible with anything you’ve worked on in Photoshop. 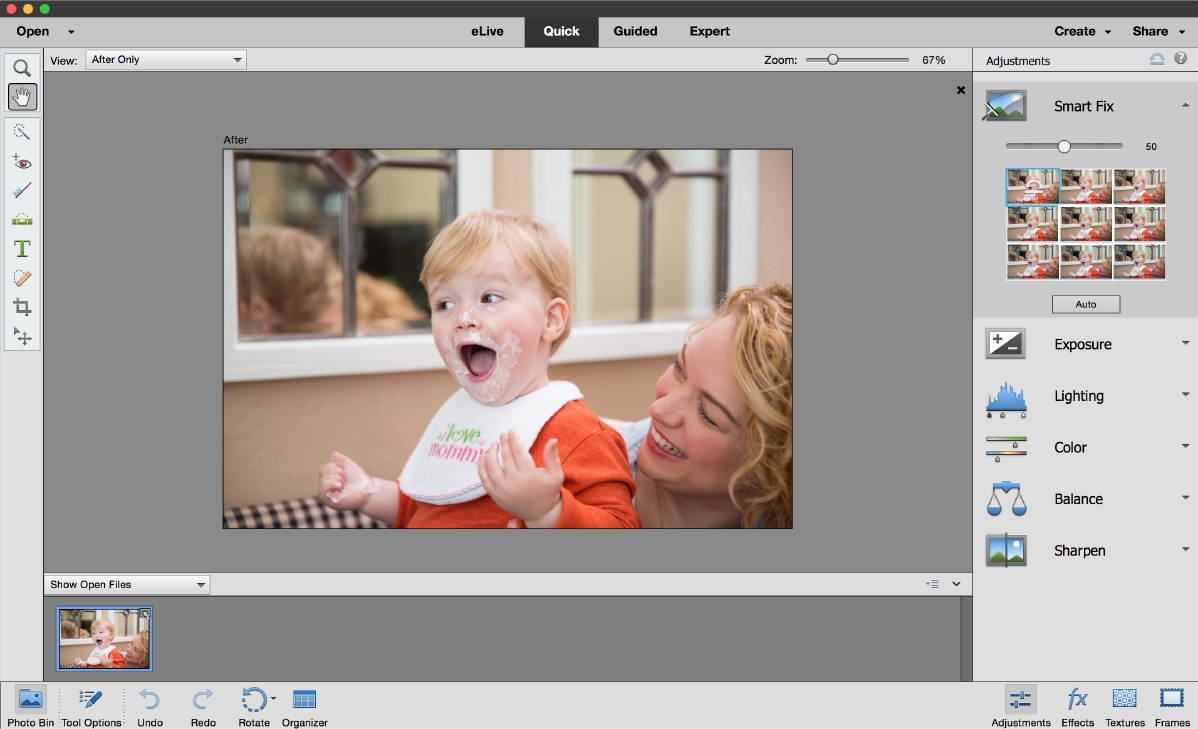 As powerful as many of these free photo editors are, sometimes you just need something with a little more oomph.

Photoshop Elements is the more beginner-friendly version of full Photoshop, offering most of the same features for less than the price of a year’s subscription to Photoshop. And, to be clear, you don’t subscribe to Elements: you buy it outright. It’s available for both macOS and Windows.

As well as all the photo editing options you’d expect, Elements provides some powerful tools including content-aware removing of objects. That means you can erase unwanted people or other things from photos extremely easily.

Better still, a lot of the core tools are ‘smart’ which means, for example, that the crop tool will offer you a selection of crops based its analysis of your image. And unlike others here, you can resize (or indeed crop) images to a specific pixel size, which makes it much more suited to power users that just don’t want to pay for Photoshop CC.

(But do see our Adobe Creative Cloud buying guide for all details on trials, prices, plans, student discounts and more.) 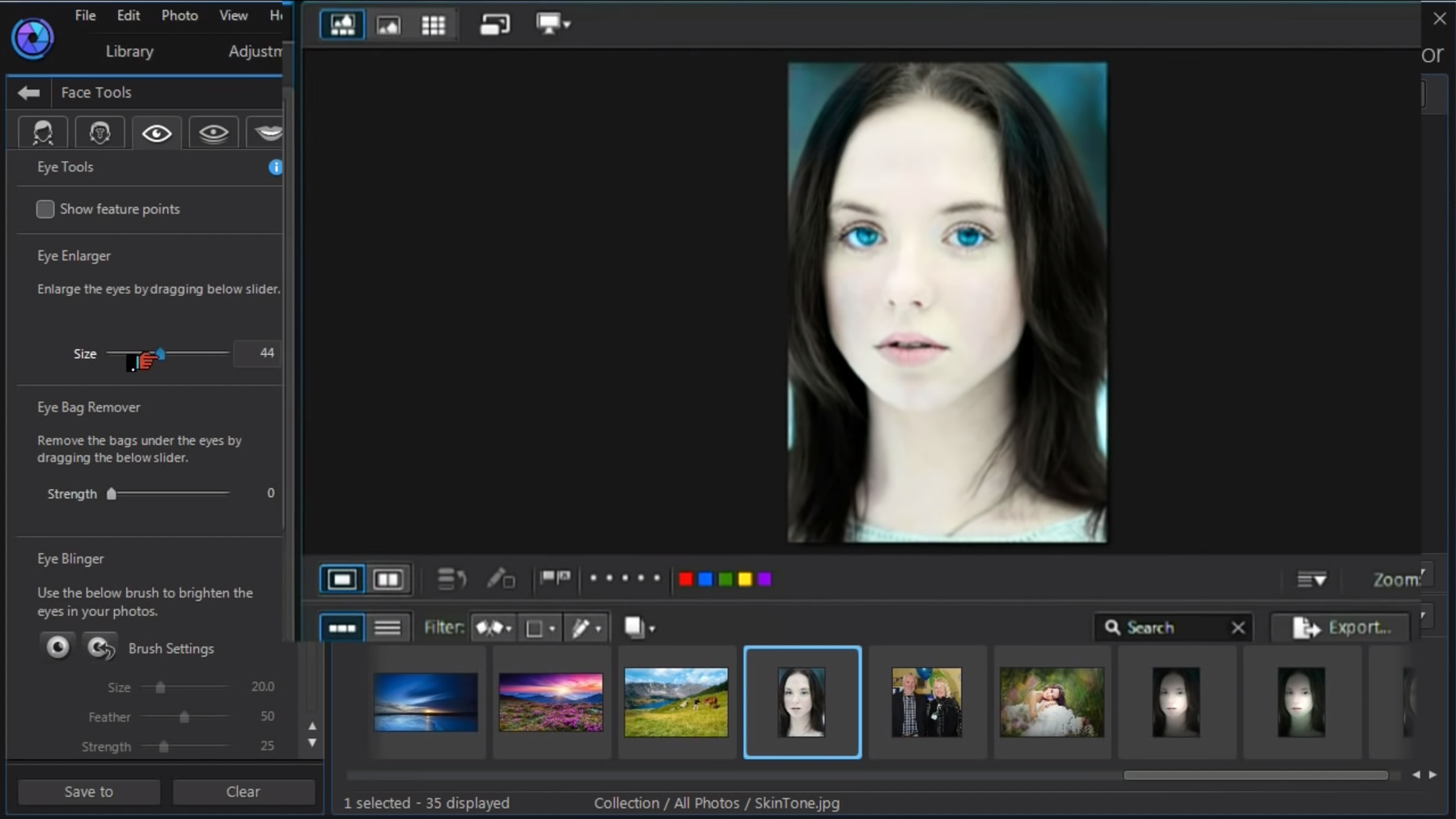 PhotoDirector used to be an Adobe Lightroom clone, but these days it also has tools from Photoshop as well as ‘Guided Edit’ features from Elements.

It offers AI-powered tools for replacing skies, and you can remove people from photos as well. It’ll make animated GIFs as well.

There are plenty of easy-to-use retouching tools too, plus handy extras including content-aware object removal which lets you erase that unwanted wooden post or whatever else is ruining your otherwise perfect shot.

Following Adobe, CyberLink now pushes you towards a monthly subscription to a version called PhotoDirector 365. This includes a range of benefits over the non-subscription version including more cloud storage and extra tools. It can also work out cheaper if you’ll only need it for a year or less (there are options to pay monthly or annually, but the monthly price isn’t great value unless you need access for a few weeks only.)

If you’re willing to spend money on a photo editor, PhotoDirector 13 Ultra and PhotoDirector 365 are good value – especially as it’s almost always discounted from its full price. 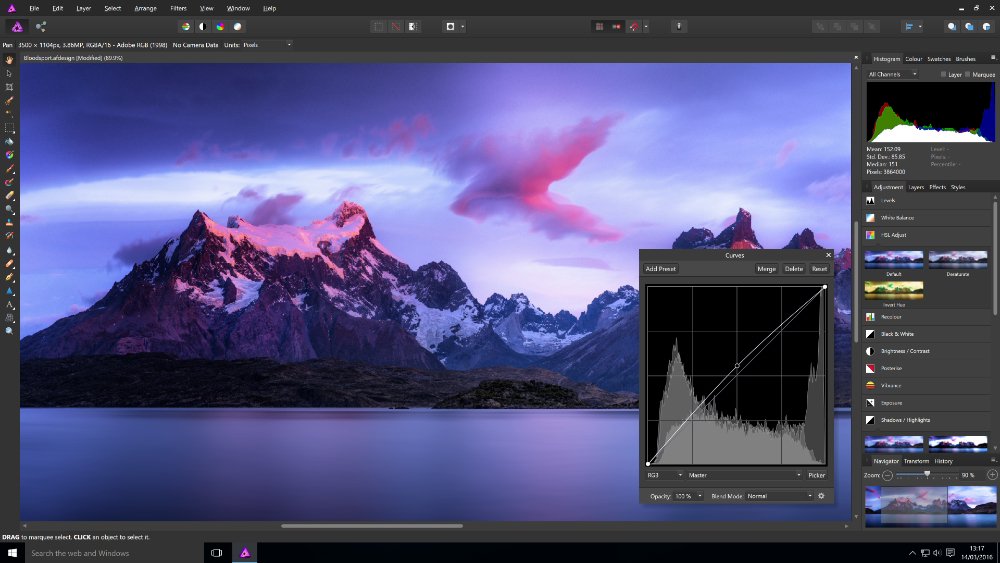 Built to offer professional features at a budget price, Affinity Photo is a step up from the free editing software listed here.

The layout will be mostly familiar to anyone who’s used Photoshop in the past, though Affinity has a few of its own idiosyncrasies and quirks, most obviously the ‘Personas’, a selection of operating modes you switch between depending on what you want to do, giving you access to different tools and options.

There’s a lot of functionality here, and it’s not the most beginner-friendly app around, but it’s a great way to get advanced photo editing tools without spending too much.