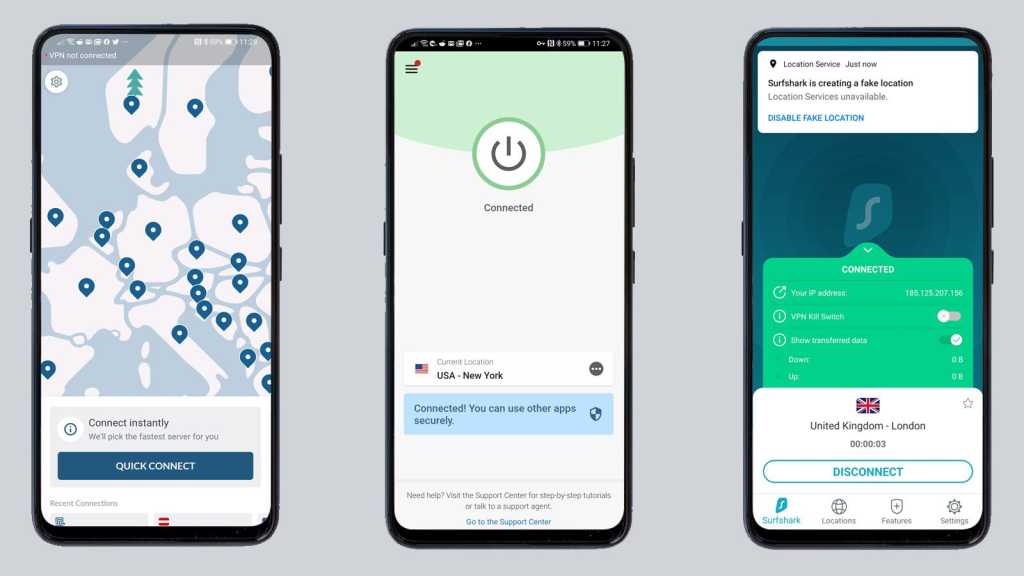 Almost all VPN services offer an Android app, but that doesn’t mean any VPN app will do.

Not only do the features and settings in each app differ, but so does the service behind it, from the monthly price to the number of servers available, and the speed of the connection.

It is true that the best VPN services are often the best across all platforms, but some providers really go to town on their Android app, giving it lots of useful features, while others are much plainer.

Here, we’ve rounded up five of the absolute best, and you’ll be happy with any of them.

You can also find out more about VPNs work and  how to use one on Android.

If you want the best VPN for Android, our top choice is ExpressVPN.

The app offers everything you’d want: a kill switch (called Network Protection), OpenVPN and the proprietary Lightway protocol, split tunneling and a handy auto-connect setting which connects to a server when your phone connects to an untrusted Wi-Fi network.

Particularly useful is the fact that there’s an Android widget which you can put on your home screen and use as a shortcut to connect and disconnect the VPN without even opening the ExpressVPN app. You can’t use it to change servers, but tapping the server name opens the app on the server list, so even that’s quick.

You can save your favourite locations for quicker connection, or let the app’s ‘Smart Location’ feature find the best connection for your needs.

The service behind the app is top notch: great speeds, seamless unblocking of various streaming services and servers everywhere you’d want them.

Yes, it does cost more than the others here but, to repeat what we said at the start… if you want the best VPN for Android, this is it. ExpressVPN runs all its servers in RAM, with nothing written to hard drives at all, so it’s one of the most secure out there.

You can get a 49% discount by signing up to the 12-month subscription which comes with three free months.

NordVPN, despite the drawbacks you’ll find below, is still one of our top picks for Android. It recently added support for the WireGuard protocol (it calls it NordLynx) and it really makes a huge difference to speed.

Connections are virtually instant and speeds are so fast you won’t notice any slowdown to your internet connection. This means you’re far more likely to use the service more of, or all of, the time.

The app itself is very easy to use, although the simplified interface doesn’t have much detail if you want to see how busy a particular server is and there’s no way to add favourites.

Those are mere niggles compared to the more problematic absence of a kill switch. But connections are supremely stable in our experience so even that isn’t a big deal, especially if a dropped connection isn’t going to put you in harm’s way, which it almost certainly won’t. In countries where you’re breaking the law by using a VPN, dropped connections can be a major issue, but if that’s your situation, you probably won’t want to use a consumer service anyway.

Although there are thousands of servers, there’s only one available via the Android app for the UK compared to dozens of locations and servers in the US. It’s also worth noting that you can’t take advantage of Nord’s Double VPN on Android, which routes your connection via two servers in different countries. You can with Surfshark.

You will find useful features such as split tunneling, CyberSec and Tapjacking, which protects you from malicious apps which steal your logins and other info.

The cheapest plan is the two-year subscription, which is billed up front and works out at around £2.68/US$3.49 per month.

Surfshark doesn’t have quite as many servers as some rivals here, but there are still a lot – over 1700 – and when you factor in the price and the features on offer, it’s a great-value choice.

In fact, Surfshark’s Android app has more features than just about any other. There’s a kill switch, split tunneling, auto-connect for mobile networks and Wi-Fi, plus GPS spoofing (an extra measure to prevent apps detecting your real location) and CleanWeb, which blocks adverts and website trackers.

On top of that, you can use Surfshark’s Multihop servers, which route your internet connection via two servers – yet another way to ensure your real location and identity cannot be discovered.

Plus, the app is well designed, allowing you to see which servers are the least busy, the ability to favourite particular servers and – of course – quickly connect to either the fastest available or physically nearest server.

If there’s a drawback, it’s that Surfshark hasn’t yet added support for the fast new WireGuard protocol and connections can take a fair amount of time: 20-30 seconds in our testing.

Speeds aren’t bad, but they’re by no means the quickest. The protocol is chosen automatically, but the fastest option is likely to be OpenVPN.

However, before you dismiss it, note that Surfshark does a great job of unblocking video services, lets you connect unlimited devices at once and only costs £1.95/$2.49 per month.

CyberGhost is a huge name in VPNs, and it should come as no surprise that it’s Android app is easy to use.

It’s fast, too, thanks to the addition of WireGuard, and there are thousands of servers to choose from.

You can choose which apps do and don’t use the VPN connection (split tunneling) and there’s also a built-in ad-blocker and a potentially useful data compression option for those with limited mobile data.

You can connect via up to seven devices at once, and CyberGhost claims to unblock 35 streaming services. We certainly had no issues watching Netflix and BBC iPlayer.

One missing feature is a kill switch, so bear that in mind when choosing.

The cheapest subscription is £2.15/$2.75 per month if you’re willing to commit to three years.

Ivacy may not yet have WireGuard available to Android users, but its app does have a kill switch and split tunneling, plus a multiport setting which helps to disguise the fact that you’re using a VPN, so should enable you to get around just about all firewalls that try and block VPNs.

There are over 1000 servers to choose between, plus support for torrenting, should you need to download this type of file.

The app has three tabs which make it simple to connect to the right server. Under Purposes you’ll find ‘Start Streaming’, ‘Secure Downloading’ and ‘Start Unblocking’.

What’s missing is an auto-connection option, so you do have to remember to connect to a server when you join a public Wi-Fi network, for example.

But while there may be a few drawbacks, Ivacy is seriously compelling because of its low, low price.

This special deal gets you a five-year subscription for just 74p/99c per month. (Use code IVACY20 at the checkout to get the extra discount.)