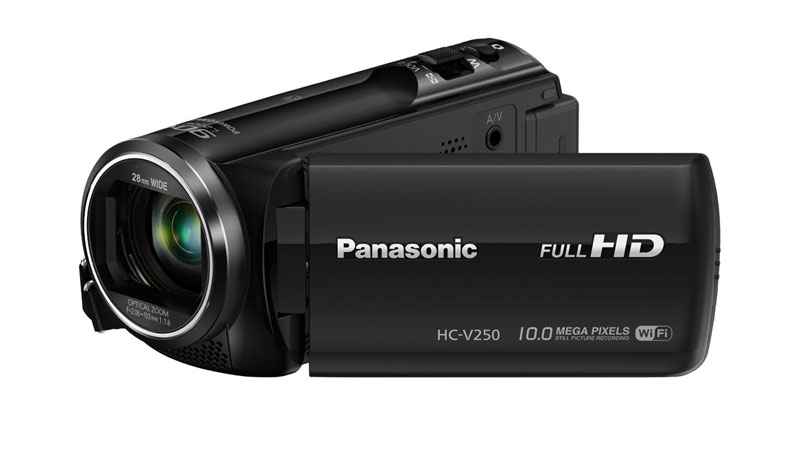 Camcorders have come on in leaps and bounds in the last decade, even with the plethora of smartphones with excellent cameras. Camcorder manufacturers have moved from devices based on tapes and hard disks to gadgets with solid-state flash memory. Some of the latest models can shoot footage which rivals TV broadcasts. However, we’re talking about the top-of-the-range devices which cost upwards of £800 rather than budget versions. Here’s our guide to buying a camcorder no matter how much you have to spend.

There’s a myriad of low-cost camcorders to choose between. However, quality varies enormously. Don’t be fooled by specifications – just because a sticker boasts full-HD, it doesn’t mean images will be sharp and full of detail.

These days, a smartphone’s camera is likely to rival (or better) the footage from a budget camcorder, so it may make sense to upgrade your handset before shelling out on a dedicated camcorder. Similarly, check if your existing digital camera’s video mode will suffice.

One reason for buying a budget camcorder, apart from the simple fact that you don’t own any other movie-recording device, is to have something inexpensive to point-and-shoot when the mood takes you. Weather-proof models aren’t much more expensive than standard versions and are ideal for outdoor action; some even work several metres underwater.

As with any camcorder, look for an optical zoom. This is the limiting factor of smartphones – you can’t zoom in on the action. A ‘proper’ pistol-grip camcorder with a flip-out LCD screen will help you follow the action more easily.

Avoid models that don’t shoot in HD, as even those that support 720p (1280 x 720) will capture vastly more detail than standard-definition (SD) models can. As we’ve said, full-HD (1080p) can be misleading on a budget model – most have small sensors that produce grainy, blotchy footage in anything but bright sunlight. Beware that ‘1080’ can refer to either 1080i or 1080p, and the latter progressive scan is preferable.

Video is usually compressed with MPEG-4, and often wrapped in its Blu-ray-friendly variant AVCHD. However, you’ll need to watch out for compatibility issues with your video-editing software. You’ll also need a powerful PC to edit AVCHD footage.

Save a little room in your budget for a memory card, as most camcorders have little or no storage built-in. Most models take SD cards, which are relatively cheap, even for fairly high capacities. For example, you can pick up 16GB for around £10 – this should be enough for a couple of hours’ recording.

Anyone buying a mid-range camcorder should expect full-HD resolution, a high-quality zoom lens and more control over shooting than a budget model provides.

Such camcorders cost between £250 and £650, with pricier models having more features and delivering better quality. A large LCD screen will help to frame the action, and the more pixels the better. Consider a 260,000-dot screen as a minimum. Many new camcorders omit a rear viewfinder, so bear this in mind if you’re used to traditional video cameras: you’ll have to use the flip-out LCD screen on the side.

Image stabilisation is included in almost all new models. Electronic stabilisation is the most basic but can still be effective. For the steadiest shots, optical systems work best, and may allow you to use full zoom without a tripod.

If you’re serious about getting the best-possible quality for capturing your child’s first steps or an important wedding, you’ll have to spend more money.

Features to look for in high-end camcorders include three sensors, one each for red, green and blue. This will produce better colours in good light, but a larger, single sensor may deliver better quality in low light. Also look for a range of manual controls; even if you don’t use them to begin with, features such as manual exposure are well worth having when you want to get more creative. Similarly, a microphone input will also be missed when you decide you want better quality sound than the built-in mic can capture.

The lens also plays a large role in determining image quality, but a good way to find out how suitable a given model will be is to read our reviews. When comparing zoom ranges, be sure to look for the optical zoom rather than digital figure. The latter merely enlarges a portion in the middle of the image, but can’t add any more detail. 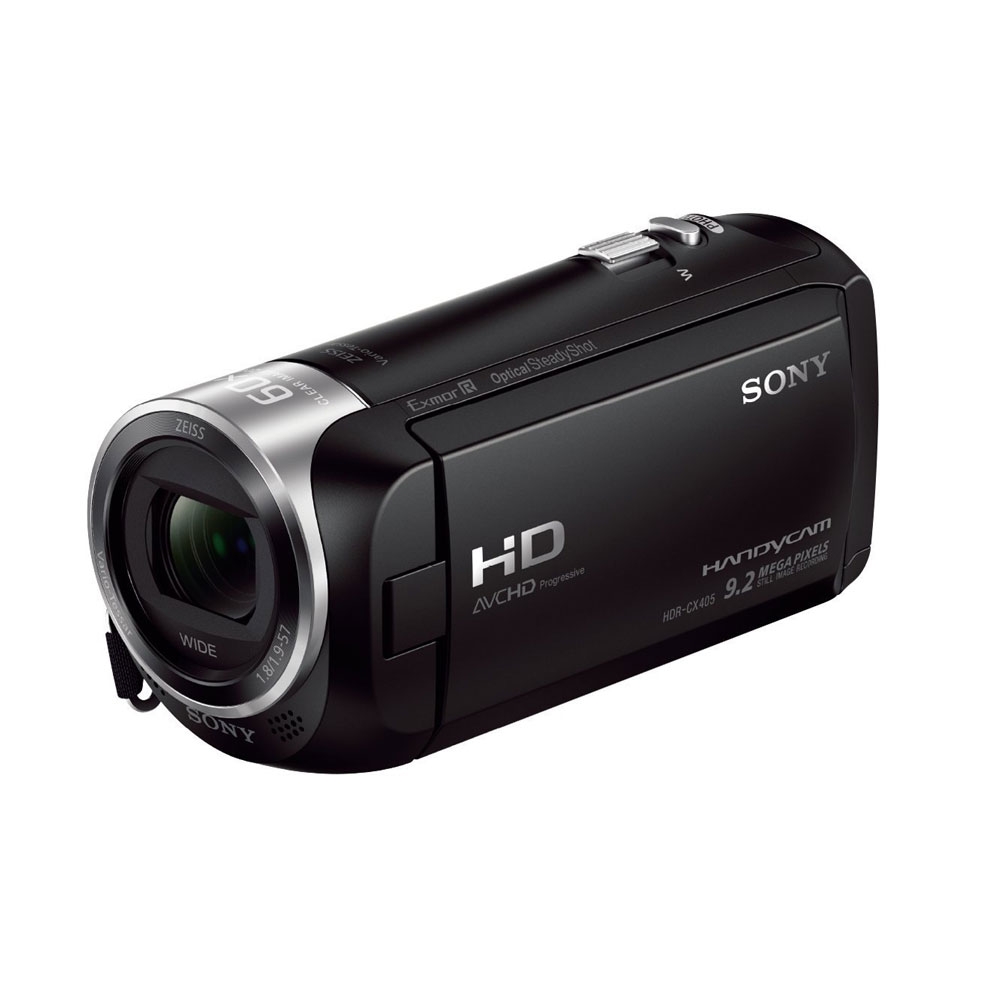 Although we all carry smartphones with decent cameras on them, if you’re at a wedding or on holiday you might want a dedicated camcorder to capture the moments. This Sony is a well-priced, popular choice, and is the least you can spend on a video camera that can record in full HD.

It’s got a sleek, classic look, one that we’ve come to expect from Sony’s Handycam range. Aside from excellent video capture capabilities, it’s the little things like the USB cable built-in to the strap that give the Sony HDR-CX405 the edge. 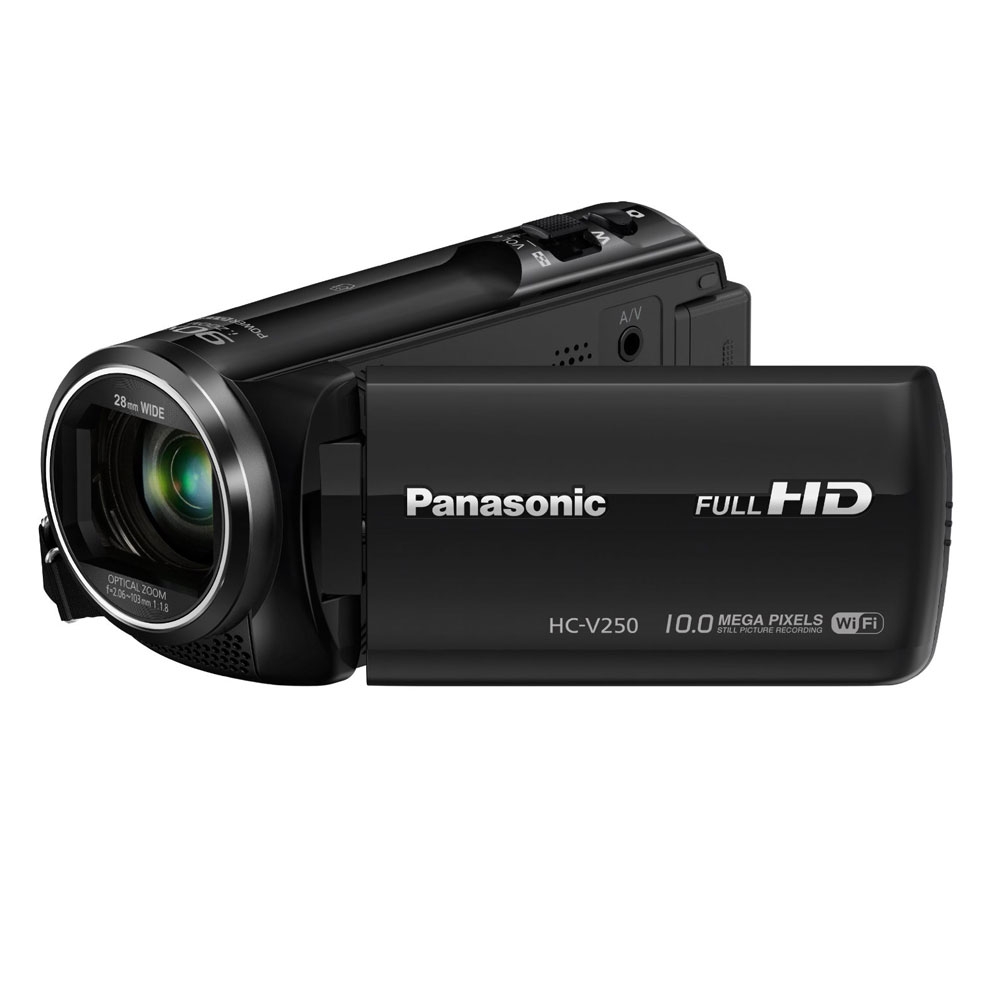 The catchy-named Panasonic HC-V250EB-K is another great choice if you’re after a video camera that can record in full HD. Its other headline feature is its up to 90x zoom, which when paired with a tripod (or a steady hand!) lets you capture footage in the distance with ease – all in high definition.

The camcorder also has built-in Wi-Fi and cleverly pairs with a tablet for uses such as a live baby monitor feed. Add to that anti-blurring technology, a 2.7in touch LCD and Dolby Digital 2.0 audio, and you’ve got yourself one compete package. 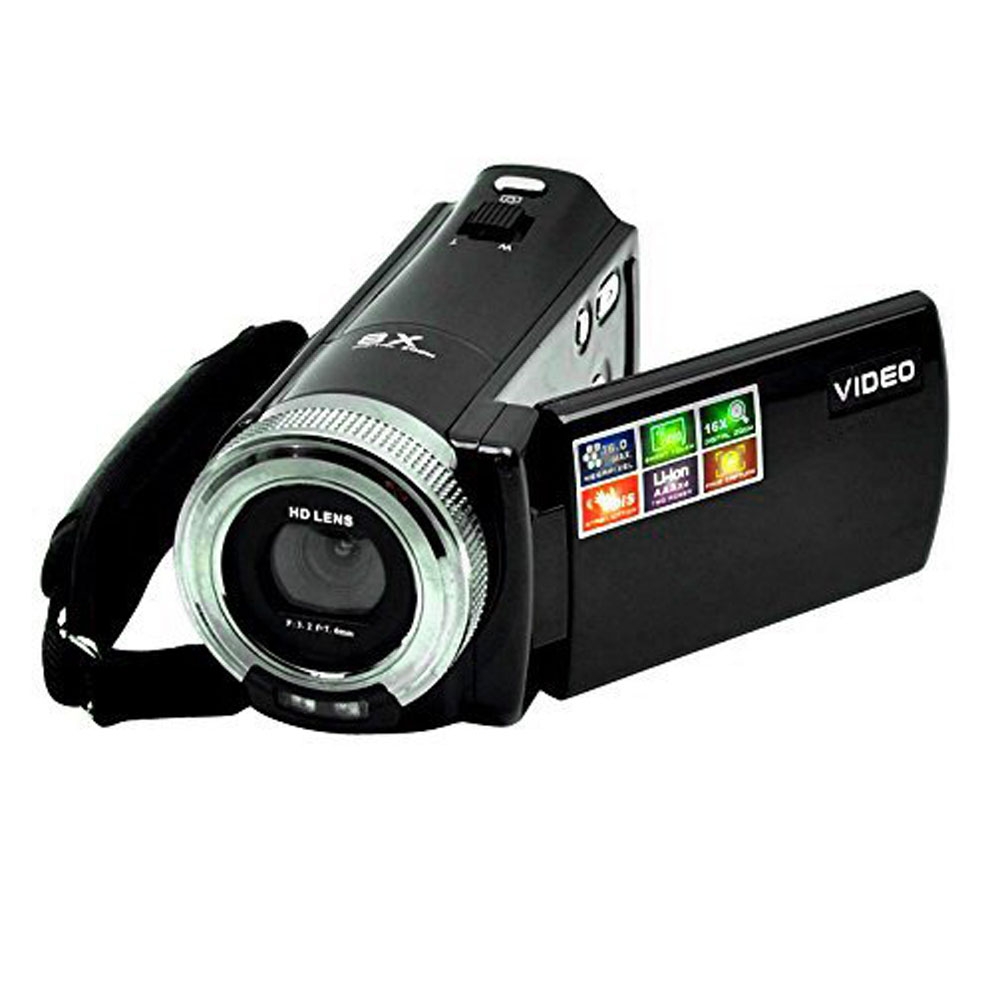 For those on a budget, this practically unbranded camcorder isn’t actually a bad option. For fewer than fifty sheets, this camcorder allows you to record up to 720p onto an SD card. Bear in mind that the maximum storage option you can use with it is 32GB, so you might want to check how full your card is before a day of recording.

The screen flips out into three different shooting positions, while there’s a thread to attach a standard tripod. This is a great choice if you want a back-up camcorder or simply don’t want to break the bank. 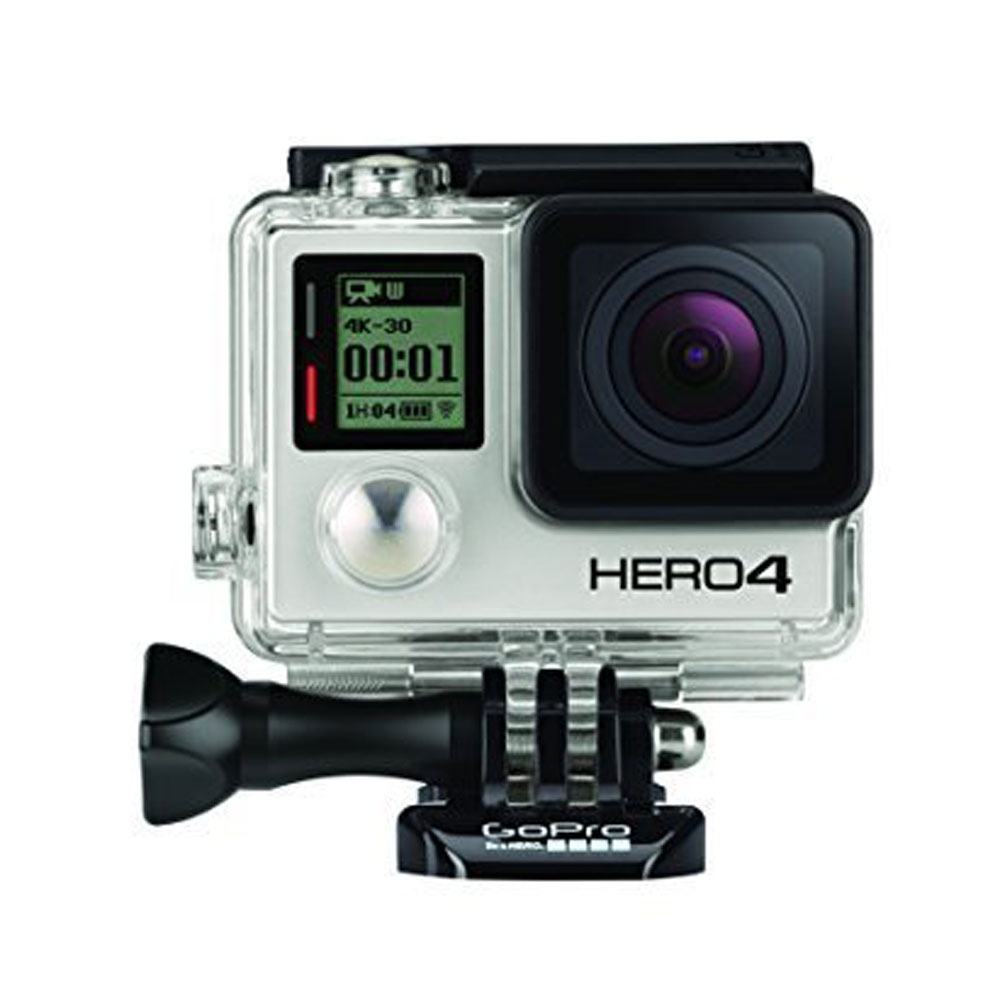 No camcorder article is complete these days without a GoPro. If you think about it, the success of the company is actually quite surprising, but once you’ve used one, you’ll never go back. The GoPro Hero4 Black is at the high end of the range, but it really is an amazing piece of video camera tech.

The diminutive camera has no screen but packs excellent specs, including waterproofing up to 40m and a maximum resolution of 3840 x 2160 at 30fps – in other words, this is 4K. See also: What is 4K?

If you are after a good quality camera that is rugged with high-end specs and don’t want a classic handheld design, the GoPro is probably for you. Read our full review here. 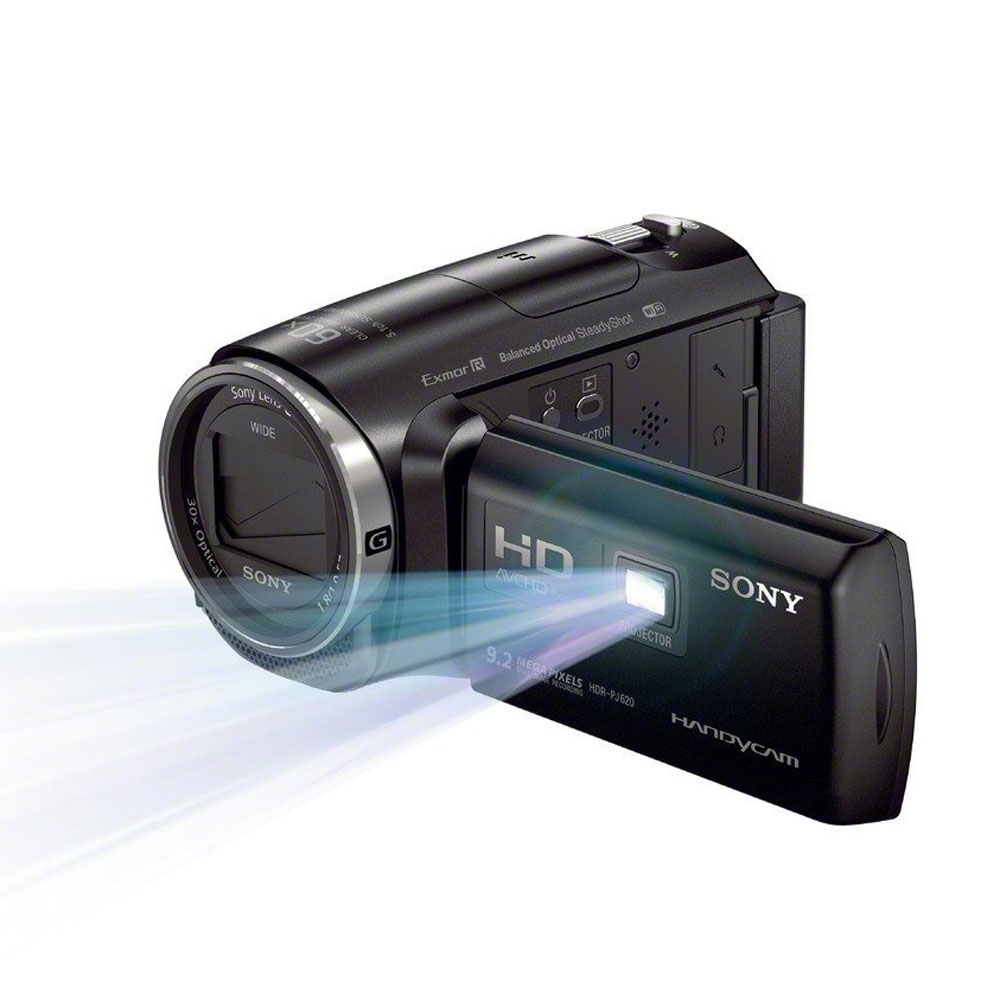 Aside from recording in full HD, this Sony Handycam has a great trick up its sleeve with its built-in projector. One of those things you don’t realise you need until you get it, admittedly, but once you have it it’s really useful. You can show your friends what you’ve shot, or show the family your holiday videos without plugging the camcorder into a computer.

The generous 3in screen is an excellent viewfinder, while the functionality to take still images even when recording video is a superb addition. At the higher end, but you’ll appreciate the extra quality on offer time and time again.