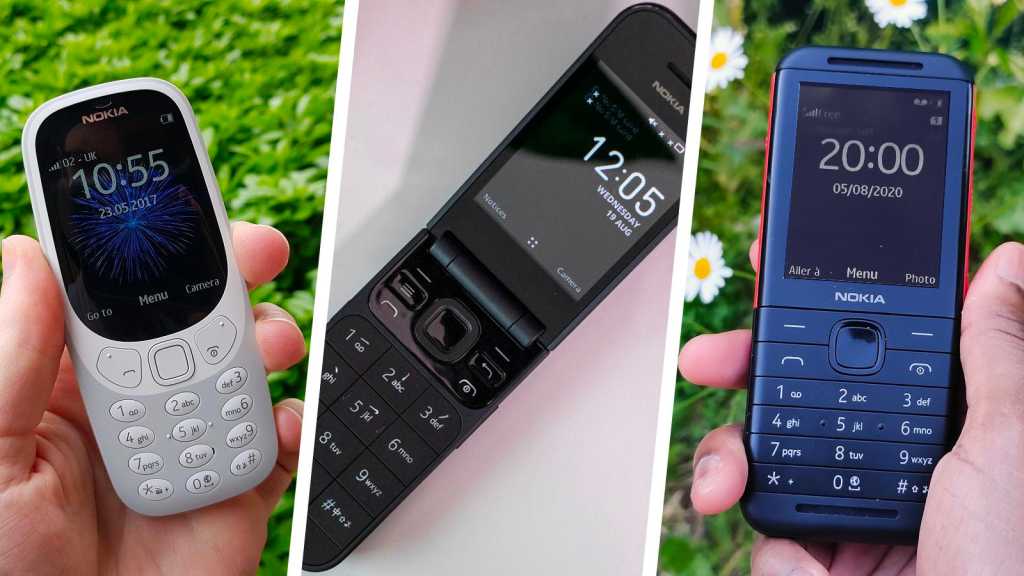 With smartphones becoming ever more complex, not to mention expensive, there are certain times when you might not want a device in your pocket that is made of glass and costs a bomb to replace or insure.

Whether you’re off to a festival, going on a camping holiday or work in environments hostile to smart devices, a simple, old-school, feature phone can be an excellent alternative. Plus, there’s the added advantage of super-long battery life, not to mention prices that make them affordable as a spare or secondary handset; one to leave in the car in emergencies, perhaps.

If you can’t live without email, maps or Instagram, then our separate roundup of the best budget smartphones might make for a better fit. But, for those whose needs are basic, here’s our pick of the ultra-cheap phones you can get your hands on today.

If we told you that Nokia made a handset running on a Snapdragon 210 chipset that lets you download games and apps, like WhatsApp, Facebook, YouTube and Google Maps, you probably wouldn’t bat an eyelid; this isn’t a smartphone we’re talking about, though, this is the Nokia 8000 4G.

Running on KaiOS, one of Nokia’s best and brightest candy bar feature phones sports a glossy eye-catching finish that includes a (relatively) expansive 2.8in QVGA display and a comfortable “3D curved keymat.” As well as being able to run a handful of essential apps, the 8000 4G also boasts an FM radio and hotspot functionality.

If you like the feature set offered up by the Nokia 8000 4G but aren’t quite as enamoured by its price, the Nokia 6300 4G – which it launched alongside – shirks some of the more premium design cues in an effort to be more affordable, without losing out on functionality.

This feature phone with smartphone sensibilities packs in the same Snapdragon 210 chipset and app-supported KaiOS experience as the 8000 4G, but with a smaller 2.4in display and a more modest VGA camera.

It still hosts a removable 1500mAh battery, although if you try, you can drain it faster than anticipated; while 512MB of RAM and 4GB of storage might prove limiting for some.

The Nokia 5310 is a great basic phone for everyday use. We like its classic design (inspired by its predecessor), as well as its distinct contrasting colour finish (based on the black/red model we tested).

Its 2.4in colour display is pleasingly sharp and vibrant for a humble feature phone, while typing on the keypad is comfortable too.

It also boasts dual-SIM functionality and microSD expandability (up to 32GB). While the removable back does seem a little fragile, it does let you get at the phone’s replaceable 1200mAh battery with ease.

As you might have expected, such a cell offers up incredible longevity, with our test unit still having power to spare after two weeks of mixed-use.

Coincidentally, you don’t need to worry about being conservative with its feature set, so make as many calls as you like, listen to its FM radio all morning or get stuck into several rounds of Snake without worry!

The Nokia 2720 Flip is one of Nokia’s popular throwback phones, here resurrecting the iconic flip phone form factor. That means you’re paying a bit of a premium for the combo of nostalgia and novelty, but there’s an argument that it’s worth it.

It certainly helps that you still get a fairly modern feature set. There’s 4G support, along with some basic apps, meaning you can still use Google Maps, Twitter, Facebook, and – perhaps most importantly – WhatsApp. There’s even an app for the Google Assistant; with a dedicated button to activate it or if you prefer, you can set this up to serve as an emergency button, sending out a text to specified contacts, in case something’s wrong.

Nokia quotes a 28-day battery life, and while we haven’t quite tested it for that long, it is clear that the 2720 will run for a while.

You also get Bluetooth, a headphone jack, a camera (though it’s admittedly a bit ropey) and 4GB of internal storage, with support for microSD cards up to 32GB.

Continuing the trend it began with the revival of the 3310 in 2019, the 8110 is another reissue of its classic handsets from yesteryear.

Also known as either the ‘banana’ or ‘Matrix’ phone, the design itself is a little unusual, as it features a full colour 2.4in display in the top half, with the number-pad below covered by a sliding compartment, all of which is curved. To complete the banana motif, there’s even a bright yellow model available, alongside the black livery used in the Matrix.

Sadly, the onboard storage is limited to 4GB – although this can be expanded by 32GB if you insert a microSD card. Dual SIM slots bring the welcome addition of a nano-SIM option, making it easy to switch between modern handsets and the 8110.

One useful feature is being able to sync appointments and contacts from Gmail and Outlook, plus you can use the 8110 to create a mobile hotspot through (up to) a 4G LTE connection.

It’s not quite as cute as its smaller sibling, but there’s plenty to love about the 8110, if you want a basic phone that can still handle internet tasks. Best of all, it’s now regularly found at a discounted price.

TTfone Lunar TT750 – Best for ease of use

The TTFone Lunar might not be the first phone that springs to mind but the company has been making a name for itself in recent years, with inexpensive products aimed primarily at the elderly and those with less than 20/20 vision.

This is borne out by the large print used on the keypad, making it easy to distinguish one from the other, without needing a chunky handset and generous on-screen font size as standard.

Accessibility features don’t end there, as the TT750 also boasts loud overall speaker volume, to ensure that text messages and calls aren’t missed, plus a programmable SOS emergency button, which means the phone can fire out an alert if the user has a fall or other accident.

The clamshell design makes the TT750 easy to fit into bags or pockets, and a desktop cradle dock removes the need to fiddle around with leads when you want to recharge the battery.

If you’re thinking of buying a phone for your elderly relative and want something easy-to-use, then the TT750 should be on your shopping list.

All aboard the nostalgia train to the year 2000, as the classic Nokia 3310 returns.

This updated version of the iconic mobile phone is one of the best-looking refreshes we’ve seen, with a choice of four colours (red, blue, yellow, and grey) sure to draw many eyes and remarks when you’re out and about.

It’s got physical keys and a relatively spacious 2.4in colour screen on which you can enjoy classic games like Snake. Thanks to the addition of 3G, there is also the ability to use Twitter, Facebook and basic internet services; although it’s not exactly a fluid experience.

Music is available through the built-in MP3 player and FM radio apps, with 128MB of storage available, which can be expanded by a further 32GB via the microSD slot. Bluetooth 2.1 also means you can hook the 3310 up to speakers wirelessly, or you can keep things old-school by using the 3.5mm headphone jack.

There’s no WiFi and the microSIM slot will make it tricky for some users to switch to the 3310 as a backup device, but if you want a pure slice of design history, then the 3310 is a very cool little unit.

If you’re after a very basic device for texting and making or receiving calls, then you’ll be hard-pressed to find a better option than the Nokia 105. This compact handset features a simple, clean design that belies its inexpensive nature.

The 1.8in display is bright and large enough to display the minimal information required for a phone of this type, and the island-style keyboard makes it easy to type out texts without fumbling over your fingers.

There’s not much in the way of storage, only 4MB which is just enough for phone numbers and contacts, and you won’t find any internet capabilities, but that’s kind of the point. It’s a phone, not a pocket computer, and as such completes its duties without fuss and for likely less than the cash you carry on your person.