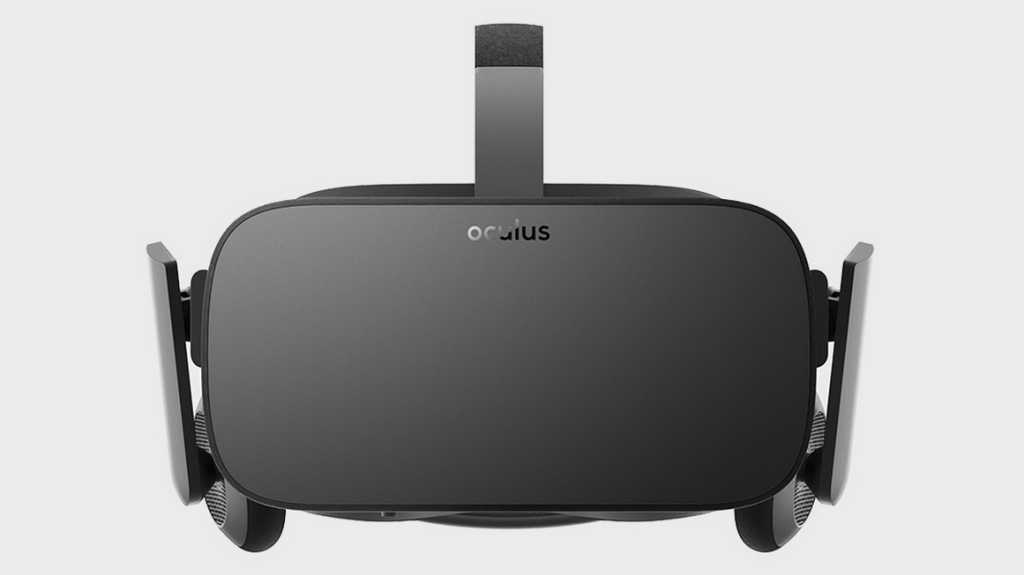 The Oculus Rift and Touch controllers are readily available to buy in the UK with a rather attractive price, bringing virtual reality to the living rooms of thousands of gamers. But once you’ve got the headset, which games should you buy? There’s a wide variety of games and experiences available on the Oculus Store, after all.

Don’t worry: we’ve spent a lot of time in the world of virtual reality recently to bring you our top picks of the best Oculus Rift games available in 2019. For those looking to the future, we offer a roundup of the most exciting upcoming VR games. 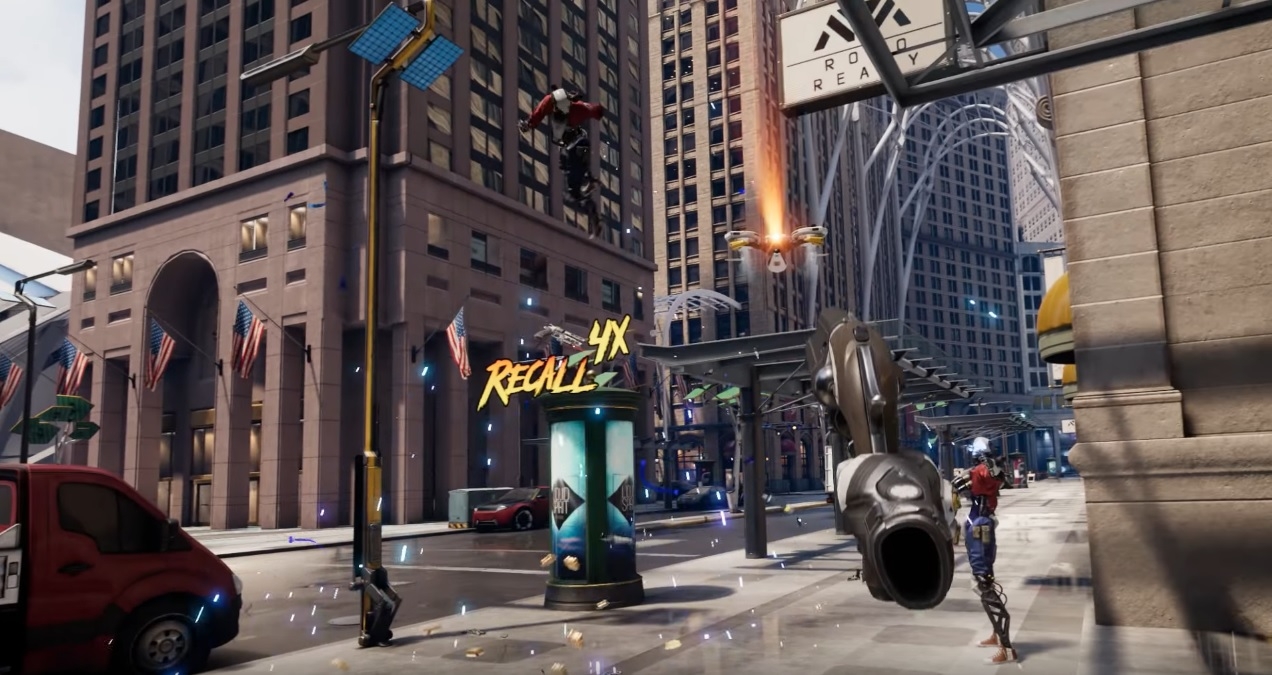 Robo Recall is hands-down our favourite game available for the Oculus Rift right now, and it’ll take something pretty impressive to knock it off the top spot. Robo Recall is essentially a first-person shooter where you ‘recall’ (aka destroy) a bunch of defective robots hell-bent on taking over the world.

However, it doesn’t just encourage you to shoot as many robots as possible – it urges you to get creative with it, as the highest scores are achieved by using creative combat tactics and skill shots.

The best part? If you drop your weapons or run out of ammo, you can reach out, grab the robot and rip its head off. Or, if you’re like us, you can beat away swarms of robots using a robot arm that we’d ‘acquired’ moments before. It’s light-hearted chaos, and a great way to let off some steam. If you’re looking for a fun shooter with satisfying shooter mechanics and an intuitive move system, Robo Recall is one to invest in.

The game is free from the Oculus Store with every purchase of the Oculus Touch controllers.

While Superhot VR sounds like something a little X-rated, it’s one of the most engaging and satisfying VR FPS games we’ve had the pleasure of playing. The key feature of Superhot VR that separates it from a sea of other FPS games is that time only moves when you move, allowing you to combine strategy and pure mayhem in true Matrix fashion.

It’s a challenging game, too; if you get hit once you die, there aren’t any ammo refills and for much of the game, you don’t even have a gun. What you do have is everything around you, from bottles to plates to your fists, to destroy the Polygonal enemies fast approaching. Gunplay is extremely satisfying, as is knocking incoming bullets away with the side of your weapon.

Essentially, it’s a game where you shoot, slice, punch and maneuver your way through a simplistic, polygonal universe in slow-mo. Sound good? It really is. 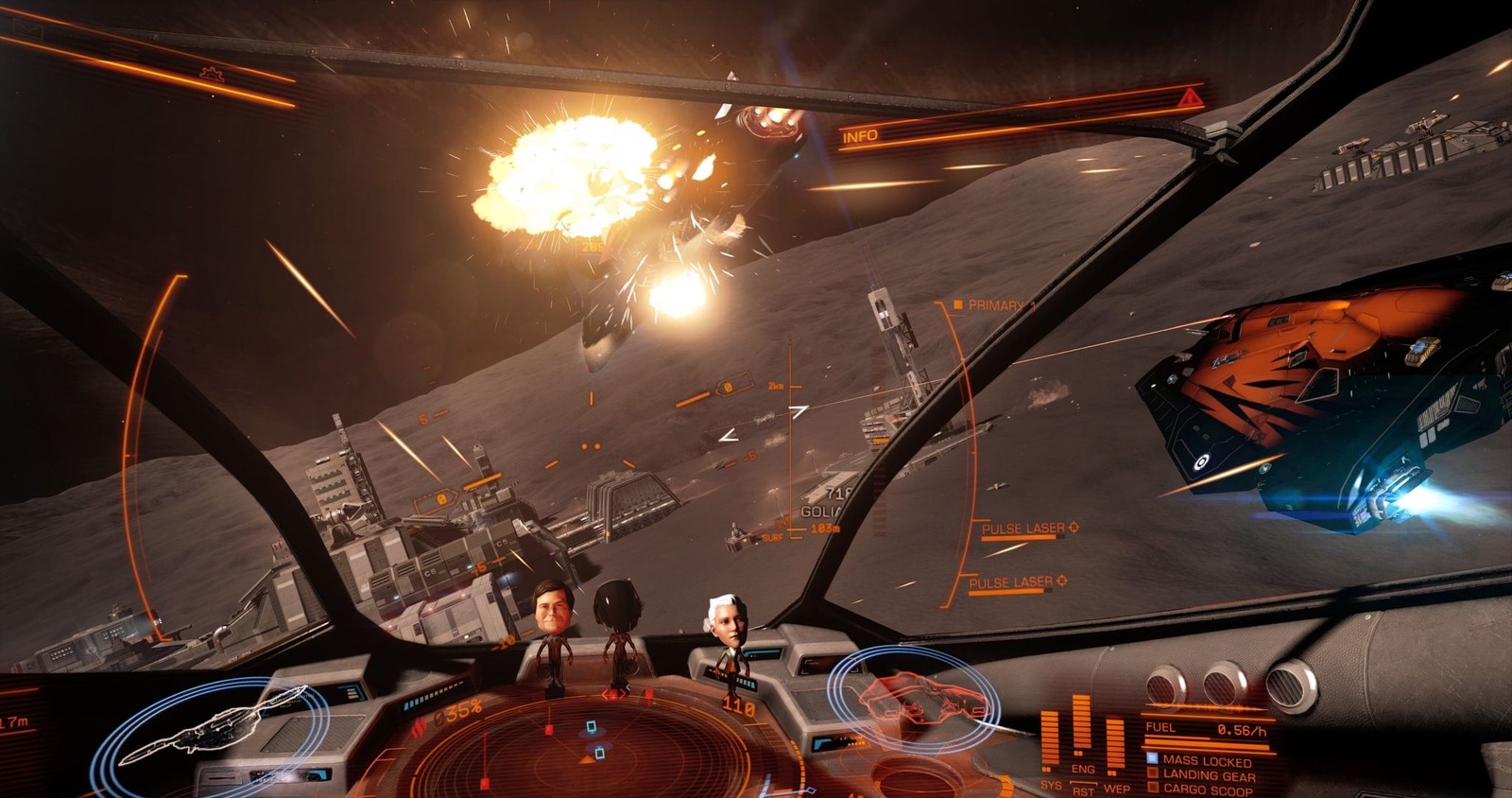 Elite: Dangerous is amazing, both graphically and in terms of gameplay, and only gets better when experienced in virtual reality. The hugely popular universe-wide sandbox game has seen success after success, especially after its well-received Horizons update allowed players to land on planet-size planets.

You spend your time in a spaceship (or buggy) cockpit flying through space, dogfighting with enemy players and scavenging with monitors around you displaying various information about the ship and its environment.

VR makes the experience 100 times better though – with a VR headset on, you are the pilot. You can even look down and see your ‘body’ and if you use a joystick to control the ship in real life, the movements will be mimicked in game.

It’s incredibly immersive, and lets you gaze out of the window to hunt down your enemies or take in some of the no doubt beautiful sights you’ll come across throughout the galaxy. 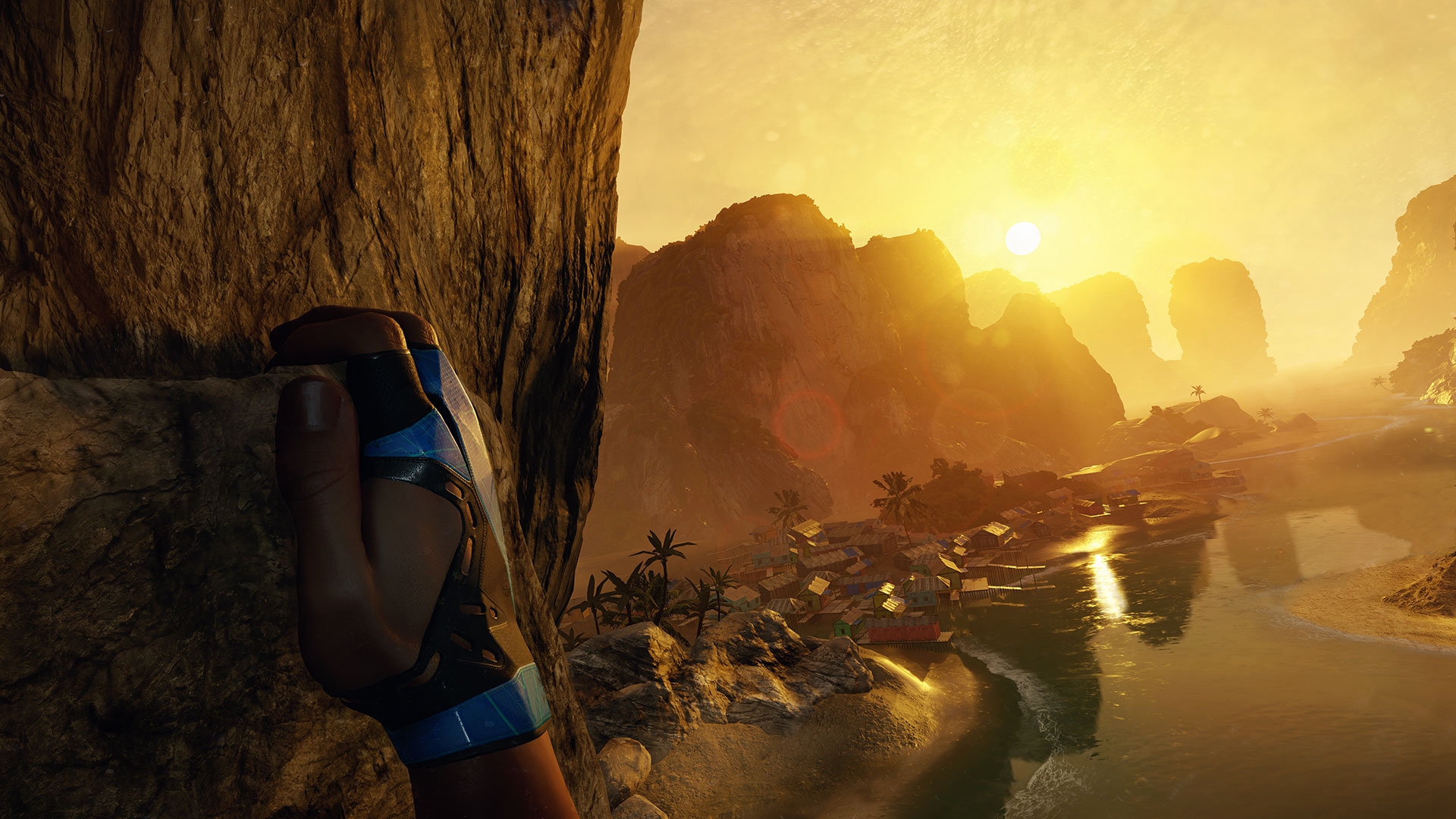 The Climb allows you to do exactly that – climb in VR. The game allows you to virtually scale incredible heights while taking in some of the high-end vistas provided by Cryengine, from the Alps to the Artic Circle.

It’s not as simple as you may think though: when used with Oculus Touch controllers, you have to not only make sure you’ve got a good grip on the wall you’re climbing up, but you’ve also got to keep an eye on stats like stamina and grip. There’s even some virtual jumping involved, which never ceases to get the heart racing – even in VR.

And yes, just like in real life, if you free-climb and slip, you fall.

There’s also a bunch of multiplayer features and challenges to complete, bringing you back for more once you’ve scaled each peak.

However, while the game is very well made, the Oculus Touch tutorial is a little confusing and the on-screen graphics didn’t clearly explain which buttons did what, meaning there was an element of guesswork during my first few climbs. Not a deal breaker, but worth bearing in mind.

Keep Talking and Nobody Explodes 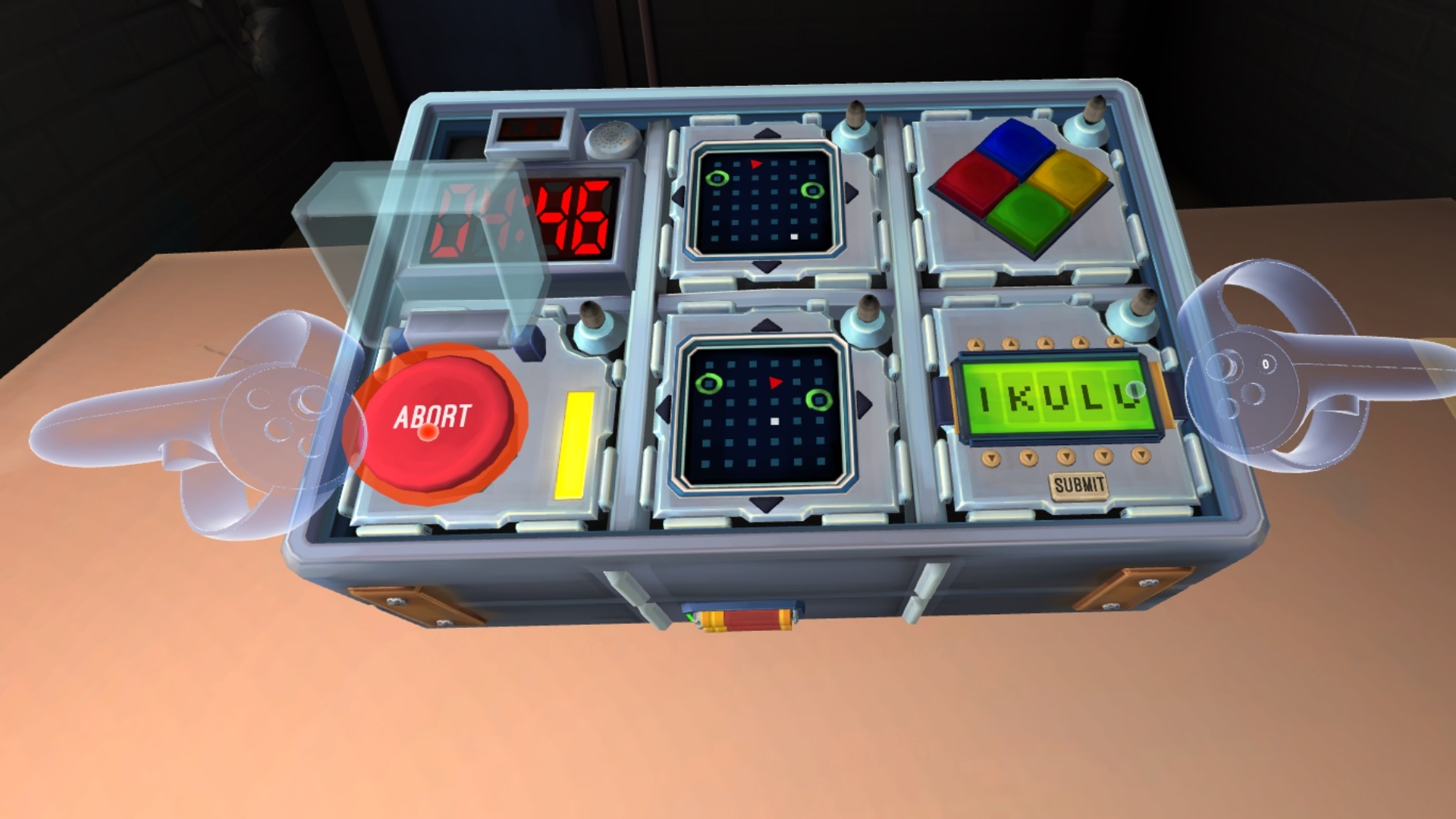 The idea behind ‘Keep Talking and Nobody Explodes’ is fairly simple – one player is trapped in a virtual room with a ticking bomb while the other players, aka ‘Experts’ have to explain how to defuse the bomb.

How? The experts are tasked with deciphering information found in the bomb disposal manual which can be accessed via the Bomb manual website (or printed out for extra fun). While that doesn’t sound too amazing, there’s a twist – the experts can’t see the bomb so discussion is required, and there’s a fairly short time limit.

It’s a fun option for gatherings and parties as it gets everybody involved in the game, not just the person using the VR headset. It’s also available for the HTC Vive, and doesn’t necessarily need a headset to be played, it just makes the game more immersive. 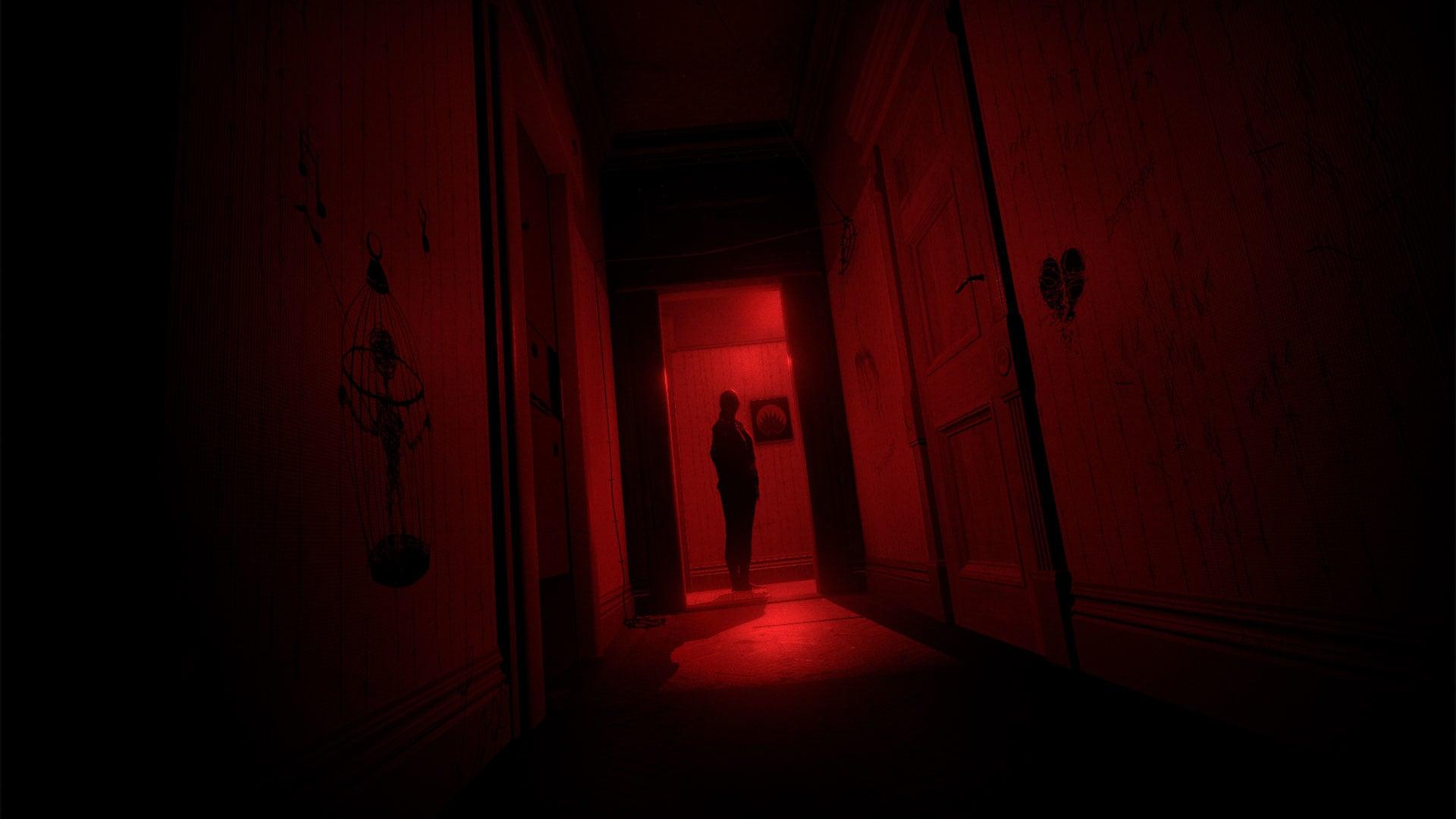 Transference is a trippy thriller-cum-horror from Elijah Wood (y’know, Frodo) which aims to bridge the gap between films and games. It doesn’t quite do that, but it does bring a certain Hollywood flair to a great single-player immersive experience.

You’re tasked with exploring a small family apartment – except this isn’t a real apartment, it’s a digital imitation created by a (mad) scientist who you quickly realise has made digital copies of himself and his family.

An idyllic family life this is not though, and as you play you solve puzzles (through a neat mechanic by which you flip between different versions and timelines) and discover the darker side of the Hayes family and just what their new digital life involves.

Transference both a smart puzzler and a genuinely frightening horror experience, bolstered by live-action footage featuring a great cast – including the brilliant Macon Blair – that only occasionally veers into the OTT. 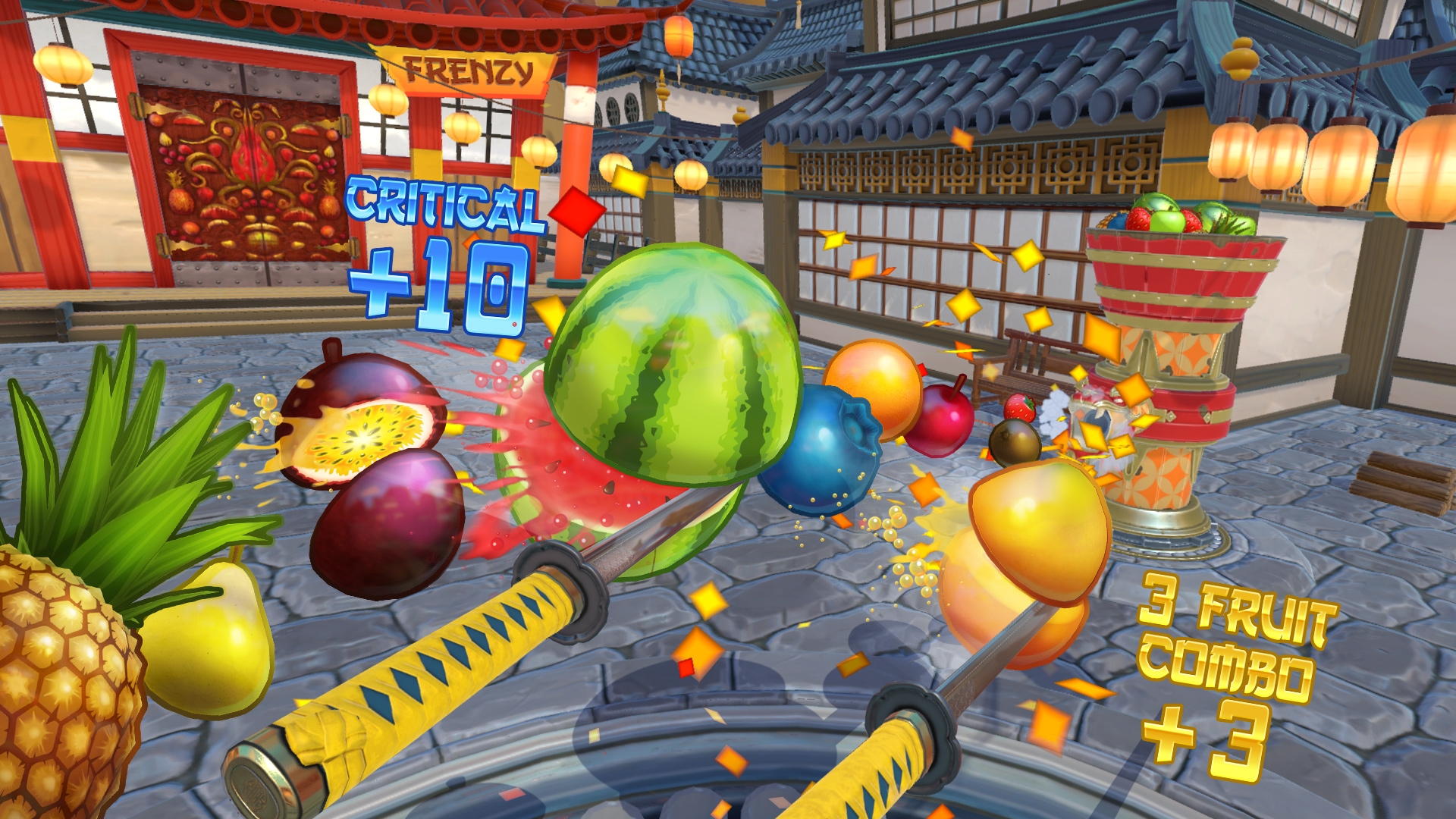 If you think the name sounds familiar, you’re right: Fruit Ninja, the hugely popular mobile game, has come to the world of VR and it’s very similar to what’s available on the small-screen. However, instead of swiping your finger to cut virtual fruit, you’re now armed with two samurai swords.

The core gameplay is the same as on mobile: slice fruit as it appears while avoiding bombs and try to build up high multipliers. There are a bunch of different game modes (Arcade, Zen and Survival) that provide more challenging setups, and thanks to a worldwide leaderboard, you’ll always want to retry.

It’ll take some practice to get the angle of your swipes right, but beyond that, it’s a very fun game that you’ll keep coming back to time and time again.