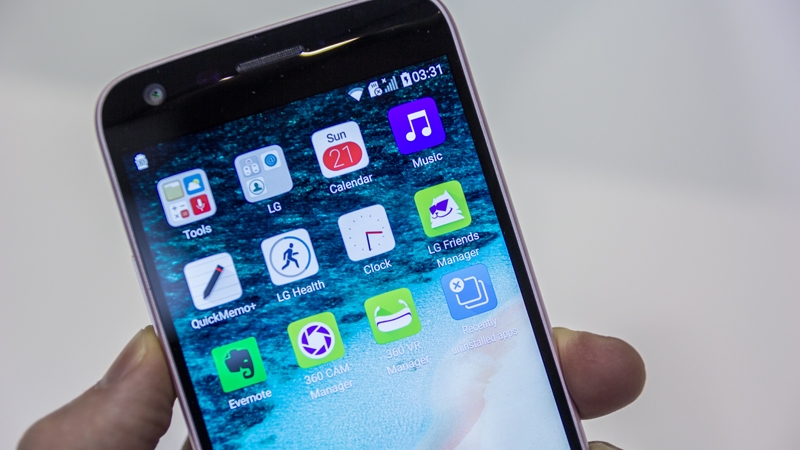 Before opening up the device itself, popping out the SIM tray gives you access to not only the SIM itself but also a slot for a Micro SD card. This can be up to the capacity of 200GB, which matches that offered by the Samsung S7 (and is also the biggest capacity currently on sale in this format). With expandable storage seeming to have been on the way out last year, it’s good to see that rumours of its demise had been greatly exaggerated.

Possibly the most innovative part of the LG G5 design is that of the Friends Modules. These are attachements that plug into the bottom of the phone and expand its functions. They include camera packs, HD audio boosters, and a range of other cleverness. The one we think people will use most though is the simple ability to remove the battery, replace it with a new, charged one, then slide it back in again. The whole process takes a few seconds and could certainly be a real help on a busy day.

In recent years LG has built an excellent reputation for high quality cameras in its smartphones. The one in the LG G4 was a superb effort, but the unit found in the G5 seems to have surpassed its impressive older sibling.

The most obvious detail is that the LG G5 actually has two rear cameras. The first is a powerful 16 mega-pixel with an f/1.8 aperature, aided by laser autofocus and three-axis optical image stabilisation. The second sports an f/2.4 aperature for a wider, 135 degree field of view, which can be combined with the primary unit to create some interesting shots. It should be noted that the secondary camera is only 8 mega-pixels, but there’s little doubt that the LG G5 is up there as one of the finest shooters in the mobile space.

In a surprising move LG has elected to scale down the display size from the 5.5-inch found on the LG G4, to 5.3-inch on the G5. It still boasts the IPD LCD touchscreen with 2560×1440 resolution, but due to the slight decrease in size this has seen an increase in pixel density from 538 ppi to 554 ppi. While this is most likely undiscernable to the human eye, its nice to know it’s there.

The display also features Corning Gorilla Glass 4 for protection, and utilises Always-on technology that LG first introduced in its V10 smartphone as the Second Screen. This smart feature allows the time, date, and some notification data to displayed dimly on the screen at all times without biting into battery life. Very useful.

With most flagship smartphones now switching over to fingerprint readers, the inclusion of one on the LG G5 makes perfect sense. The placement of the sensor though is a little more unusual. Rather than having the standard home button on the front panel, LG instead positions it at the back. This is actually quite sensible as your finger naturally goes there when you pull the phone out of your pocket or bag.

In the chassis of the G5 the fingerprint sensor is hidden under a plate just below the twin openings for the cameras. It’s a thin, delicate little thing, but is probably one of the most helpful components in the entire device.

At the heart of the LG G5 is the mainboard, which houses a number of important sensors and processors.

Marked in red is the 4GB of Samsung LPDDR4 RAM that actually covers the Qualcomm Snapdragon 820 SOC which drives the LG G5. Next to this, indicated by the orange square, is another Samsung component that provides 32GB of MLC Universal Flash Storiage 2.0.

Surrounding these are controllers for NFC and Qualcomm’s Quick Charge 3.0, while on the reverse we find a Broadcom 5G Wi-Fi chip, LTE receivers and amplifiers, plus various power management controllers.

Put all of these parts back together and you have a truly innovative take on the modern smartphone, and one we think is among the best you can buy today.