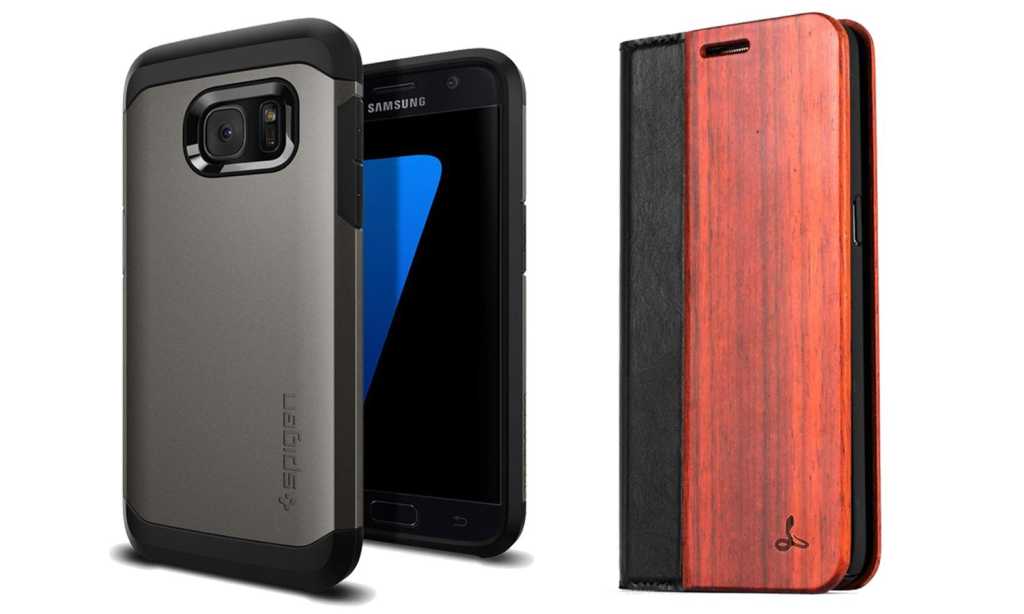 Samsung may have just released the incredible Galaxy S10 but that doesn’t mean the  Galaxy S7 should be tossed to the wayside. It’s still a good phone that deserves protection..

Whether you intend to show off its original design with a clear case, or keep it insulated in TPU armour, or just want it to look cool and stylish, we’ve narrowed down some of the best cases out there.

We’re a big fan of Olixar’s FlexiShield range of non-slip gel cases. They won’t hurt your bank balance, at less than a tenner, and they won’t detract from your phone’s unique style – after all, you chose it because you liked the look of it, right?

An ultra-slim design adds little bulk to the Galaxy S7, so it’ll slip into a pocket just as easily as ever. And as you’d expect you’ll still be able to access all the important ports and connections, so you never need take off the case (and if you do, it’s soft shell makes doing so easy).

Another clear plastic Galaxy S7 case comes from well known case maker Ringke with its Fusion bumper shell. It features dust caps for your ports and connections to keep them free from grime.

We also like the VRS Design Crystal Bumper case for Galaxy S7. It’s not completely clear, but its gold edging adds a little touch of sophistication to your Samsung phone.

Plus, it has met the MIL-STD-810G military drop tests, so it should keep your phone safe (while also keeping it stylish).

Most phone cases are made from cheap plastic and are designed to protect more than to look good. But you don’t have to compromise: a metal (or at least partially metal) case might be a tad more expensive, but it looks good and offers decent protection.

We like the Obliq Slim Meta for Galaxy S7. This ultra-thin poycarbonate shell offers full-body protection, while its brushed-metal rear panel adds style. There’s a matte surface for added grip and, naturally, full access to all ports and connections.

With the Galaxy S7 Samsung returns the IP68 waterproofing it removed from the Galaxy S5 for the S6, and it uses tough Gorilla Glass 4. But it’s still just glass, and this phone is not invincible.

The Peli ProGear caught our eye for its dual-layer impact-resistant protective case. It’s made from anti-slip material and is slimmer than many such rugged cases. The Peli also comes with a lifetime guarantee.

It’s currently unavailable in the US.

We love Spigen cases. Partly because we often find out about new phone features ahead of their launch through leaked Spigen case images, but mostly because they’re great.

Spigen sells two tough cases for the Galaxy S7 that caught our eye. The Rugged Armor is a flexible TPU case and the better-looking of the two, with glossy accents, carbon fibre textures and tactile buttons. While the Spigen Tough Armor…

The Spigen Tough Armor is a hard case that’ll do an even better job of protecting the Galaxy S7 with its military-grade “Air Cushion Technology”. It has a shock-absorbing TPU interior and a polycarbonate exterior, plus a raised lip to protect the screen.

A sort of combination of the previous two styles is the Traveler Wood Case by US company, Carved. The firm makes stunning designs made from wood that’s thin but doesn’t break.

There a loads of laser cut designs to choose from so there will no doubt be something that suits your style, from the American Flag to city skylines to world maps. Some are fairly plain while others are packed with colour.

The Carved Traveler offers a rubber bumper case that covers all the metal frame and buttons. This means more protection, and the case itself is less likely to break.

There’s also a textured grip down the sides of the rubber and, as you would expect, a cutout for the camera and flash.

If you’re keen to merge smartphone and wallet then there are plenty of options. This one from Snakehive is one of the best we’ve seen, part of its Wilderness Collection.

You’ve got a choice between four kinds of wood, and we particularly like the red rosewood one, though there’s also bamboo, walnut and cherrywood.

The wood is a great addition and the case also has two slots for cards on the inside and a handy magnetic closure to stop the cover coming open when in your hand or bag.

Snakehive makes a whole host of other styles of cases for the Samsung Galaxy S7. View them all here.